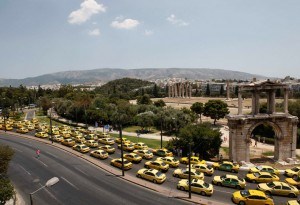 Stationary taxis are seen in front of Athens’ Hadrian Gate during a protest in Athens, July 18, 2011. Greek taxi drivers blocked roads to Athens’ airport and main harbour on Monday, holding up thousands of tourists at the start of a two-day protest against plans to liberalise their trade. REUTERS/John Kolesidis (GREECE – Tags: CIVIL UNREST TRANSPORT IMAGES OF THE DAY BUSINESS)