Oh, New York Times Travel Show– how did I not know of your amazing existence earlier? In late February, I and over 20,000 of my travel obsessed comrades convened at the Javitt’s Center in Manhattan for a weekend of wanderlust and networking. I had no idea what to expect, but whatever I had in mind, it was better. 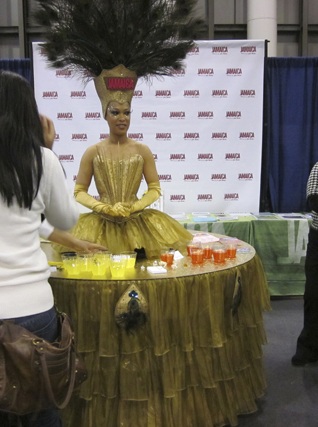 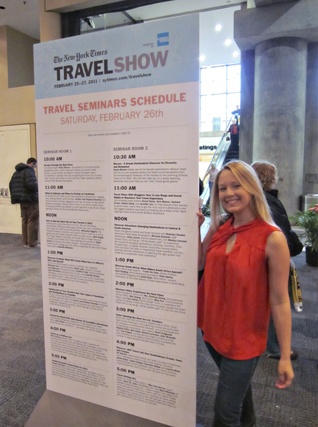 The enormous main room was separated by continent. I was first struck by the huge amount of floor space being taken up by cruise lines and domestic travel. I know it wasn’t called the International Travel Show but I didn’t consider that there would be anything other than foreign destination! I suppose the floorplan was an accurate reflection of the amount of tourist dollars spent by Americans, and shows how distorting it can be to look at travel writing constantly in which the more exotic destinations are given the most ink.

The other surprise was the large amount of travel agencies as opposed to tourism boards. I guess I naively didn’t think that many people really booked travel through agencies and tour groups anymore. Looks like I need to do some research! I did however enter every single contest, of which there were many, tour group or not. Someone has to win! Aside from promo material and contests, there wasn’t much “swag” to be had, but the two things I did pick up, a perfume from Bermuda and a 8GB flash drive from South Africa were a pleasant surprise. 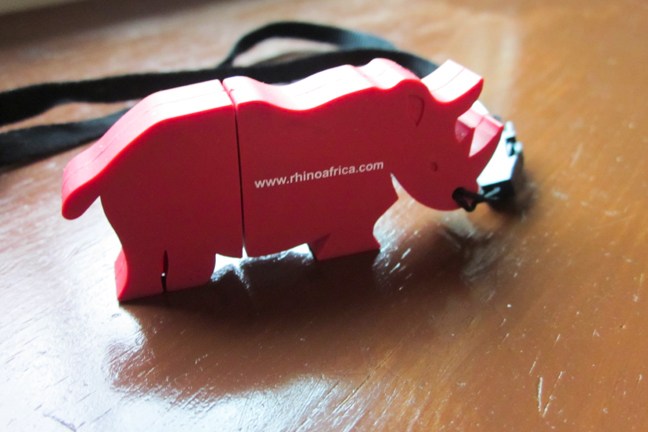 I was looking forward to stopping by the Scotland and England booths but they were noticeably absent from the show! I suppose they have more than enough tourism to keep them happy. Some of the biggest exhibits belonged to Greece, Puerto Rico, Aruba, and oddly, Panama. Thailand knocked it out of the park with samples of Thai dishes and tons of promotional material, including, entertainingly, an entire book on ways to experience elephants in Thailand. I was mostly drawn to talk to people representing places I have already been to or have plans to go to in the immediate future, as I almost didn’t want to infect myself with the obsession to go to another part of the globe right now. However I couldn’t help but pick up a booklet on great train journeys in Australia (Paul Theroux would be so proud!) or whitewater rafting opportunities in Malaysia… 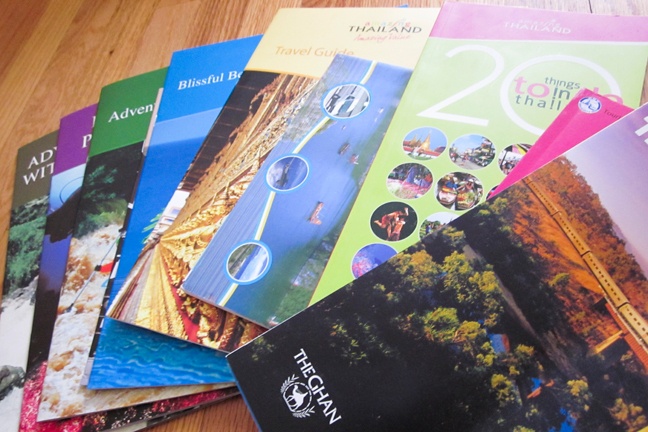 The exhibitors, amazing as they were, were really the least the show had to offer. The real draw is the seminars, which ran in two at a time in opposing rooms throughout the length of the show. Here were my highlights:

This was the seminar I was most looking forward to as it was hosted by none other than my Travel Writing teacher at NYU, David Farley. The panel was meant to discuss how to use blogs and social media to maximize your travels, though it evolved (or devolved, depending on your point of view) into the Twitter Conference. It was focused but effective, and the final nail in the coffin convincing me that if I want to take blogging seriously I will have no choice but to join twittering masses. As soon as I decide my new domain name, I will be swallowing four years of twitter related jokes and signing up. 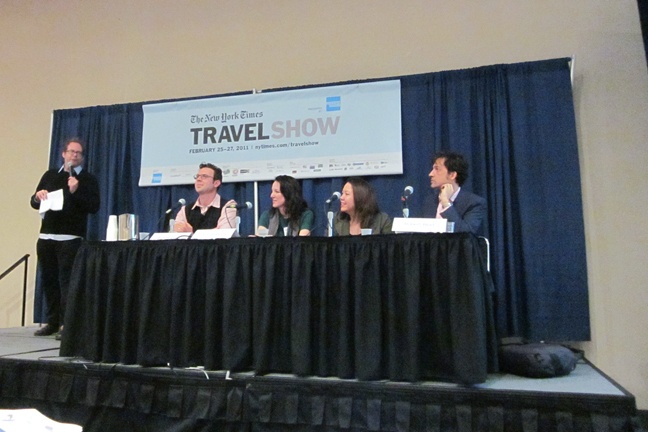 • Getting Out of Your Vacation Rut by Arthur and Pauline Frommer

I admit, in part I simply wanted to lay eyes on one of the first families of travel. I was skeptical of what they would have to offer me when they opened with the fact that “many people struggle to break out of their vacation routines of Orland and Las Vegas” (Okay, I just came back from Vegas. Whatever.) But they had some really good suggestions that I think apply to everyone- Starting with travel like a travel writer. To do this they suggested meeting locals by reaching out to your social networks or through programs I had never heard of like the Greeters. The next idea was to take education trips, where you can stay at universities like Oxford and learn from scholars. As a current university student I can’t think of anything less appealing, but I can see how this would be a good suggestion for some people! Finally they suggested volunteering. Even if you aren’t taking a full on “voluntourism” trip, they advised seeking out a local organization that will let you donate a day of your time and give back to the place you are visiting. I really liked this suggestion, though I can see how some people might balk at the idea of volunteering for a whole day when they only have a one week vacation. But its something I have tried to do (at animal shelters in both Thailand and the Cayman Island) and need to remember to do in the future.

This was a fun presentation in which tv host and travel writer Julia presented 20 of her favorite travel memories from her years on the road. She had some great stories and fun trip ideas, but what I mostly took away from this presentation was that I can never be a TV travel host, because I will never eat bugs on sticks, ever. On a serious note, I got to meet Julia as we share a mutual friend who I attended the show with, and it was inspirational to meet someone so young who has found such success in the travel industry. 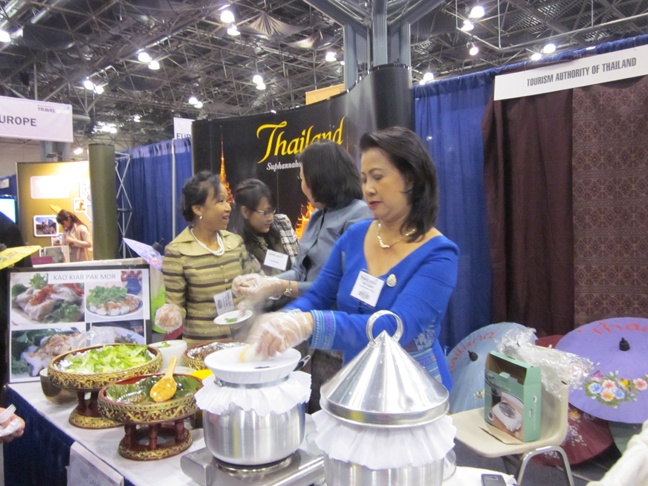 • 1,000 Places to See Before You Die by Patricia Schultz

Another fun slide show type presentation, this time by the author of traveler favorite book 100 Places to See Before You Die. Patricia showed some great photos and told romantic stories of some of her favorite places from the book. An hour later I walked out dreaming of Jordan and India.

I passed up the Samantha Brown seminar for this sparsely attended panel, and in the end I was glad. Three different tour operators that focus on Asia highlighted their favorite destinations, from India to Vietnam to Thailand to Bhutan. I left with an almost painful desire to visit Bhutan, charmed by the stories of Gross National Happiness and untouched culture, but I know it will be a long time before I can afford a trip of that caliber. The government there is anxious to keep away backpackers, and I understand why. On the upside I learned about a pottery colony in Bangkok, Koh Kret, that I had never heard of and now intend to visit. 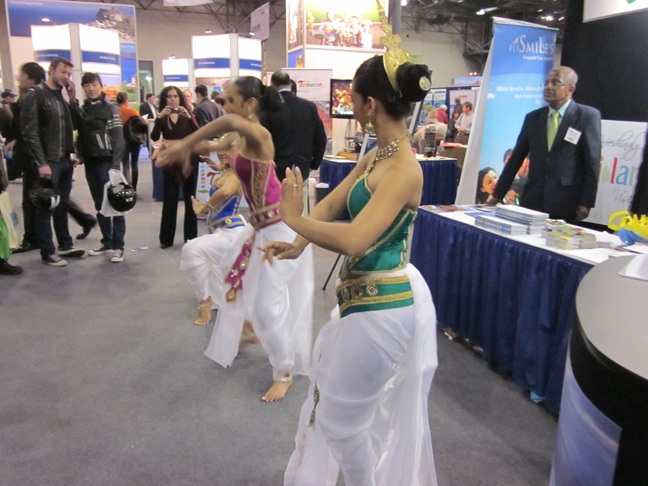 The weekend did not end at the show, however, as Saturday night we headed down to Lolita Bar to the Restless Legs Travel Reading, a series hosted, again, by my professor. The readers were the panelists from the social media panel earlier in the day and they were on fire. Their readings were fantastic and the energy in the basement of the Lower East Side bar was palpable. Standing room only, it was filled with people who were making a life, or dying trying, out of what they love: travel. I’ve always said that the amazing thing about New York City is you can always find a group of people that share your lust for whatever it is you love in live, and that night I really felt it. My only fleeting sadness was that I didn’t find it earlier in my four years in the city.

It was a great weekend and a highlight of my semester (I can’t wait until I count time in years again like normal people) as I was able to meet so many people who I look up to and make contacts with so many others that I can’t believe I went so long without knowing existed. I was lucky to attend with my friend Matt of Nomadic Matt, who introduced me to published authors, a Lonely Planet editor, a National Geographic photographer, New York times columnists and several of my favorite bloggers, like Andi from My Beautiful Adventures and Gary from Everything Everywhere. The night was filled with advice and warm wishes as I divulged my travel plans and writing dreams, and continued until I poured myself into a cab, buzzed on happy hour mojitos, big plans ahead, and life.

The Holiday Season at Home