The Beauty and Tradition of Thai Sky Lanterns

I’ve never managed to sit down and write out a bucket list. But when I get around to it, attend Loi Krathong will be right up there near the top. This festival, which takes place most famously in Northern Thailand, captures the hearts of travelers around the world thanks to this stunning imagery:

Just watching a video of these simple paper lanterns can bring me pretty close to tears. Over the past six months or so I noticed that tourists were setting them off on the beach in Koh Tao. While it’s obviously completely different from seeing them released en mass at a major festival, it’s still lovely. I adored spotting the occasional lantern bobbing like jellyfish off into the black sky. I knew this was something I wanted to do with my family when they came to visit. Our final night in Koh Samui, as my parents prepared to leave, we finally got the chance. 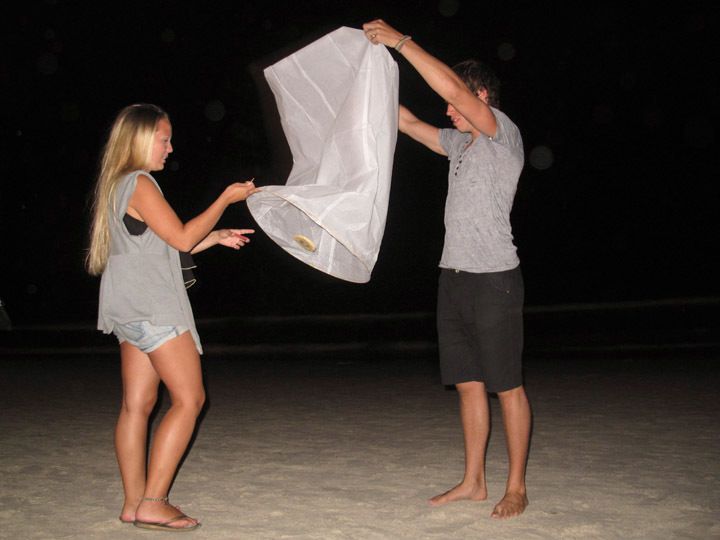 The most common Thai name for these is khom loi, or khom fai, while us farang just call them sky lanterns, or paper lanterns. The khom loi are made from a thin material, such as rice paper, to which a candle or fire starter is attached. You can see the basic construction in the above photo. When the fire starter is lit, the resulting hot air is trapped inside the lantern, creating enough lift to bring the khom loi drifting toward the sky. 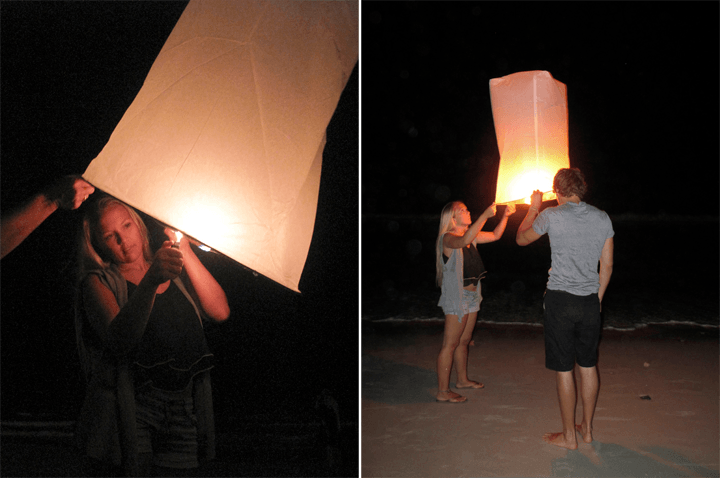 The lanterns are released not only at holidays but also during special occasions as they are considered to bring good luck. The act of setting of a lantern is highly symbolic in Thai culture- it’s a metaphor for letting go of your trials and tribulations and letting them float away from you. 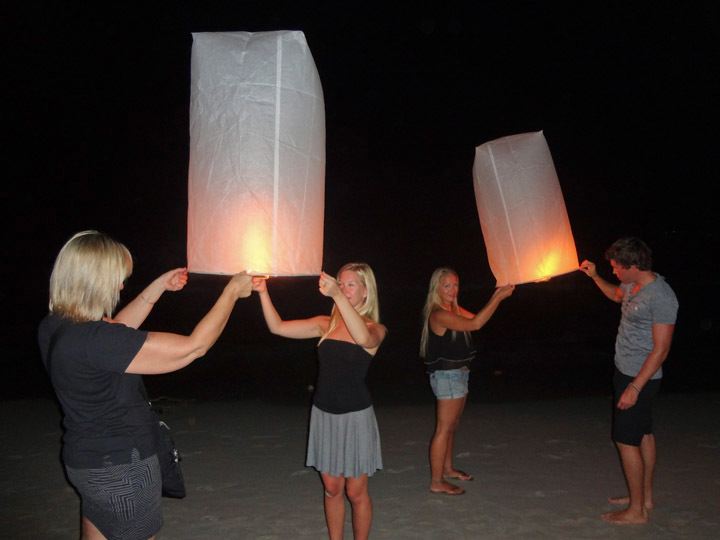 While the lanterns are still certainly most infamous for their annual appearance at Loi Krathong, tourists on the islands are starting to get in on the fun all year round. Whether its celebrating a new year, a special day, or a the final night of an amazing trip (or all of the above, like us), I can’t think of a more beautiful way to honor the occasion. 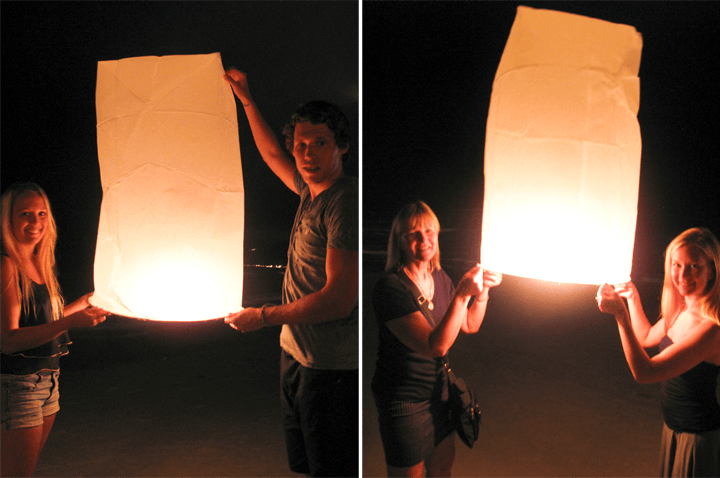 I admit, it’s fairly difficult to have a deep and semi-spiritual moment on Chaweng Beach in Koh Samui- the place is crawling with beach-vendors and merry-makers. But we managed to find a quiet(er) stretch in which to release our lanterns. 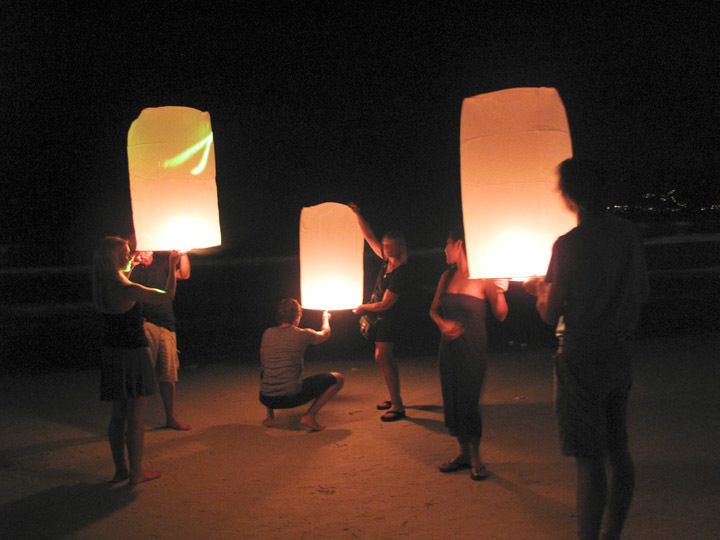 One by one we lit the fire starters and waited for them to become ablaze (a slow process), held down the lantern frames as they swelled with hot air, and finally released them out into the endless sky. 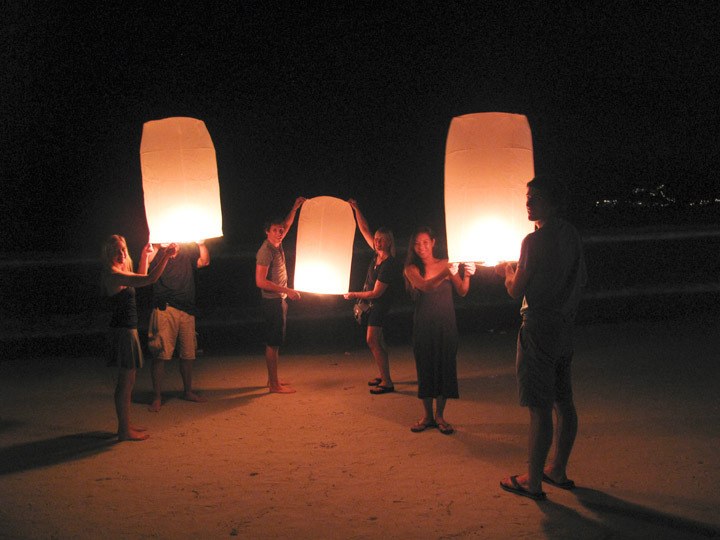 We were silent as we watched them shrink from bright, bustling aircrafts into tiny orange dots into eventual oblivion. It’s a reflective time, and I held back tears knowing my parents were leaving the next day and not knowing when I would see them again. 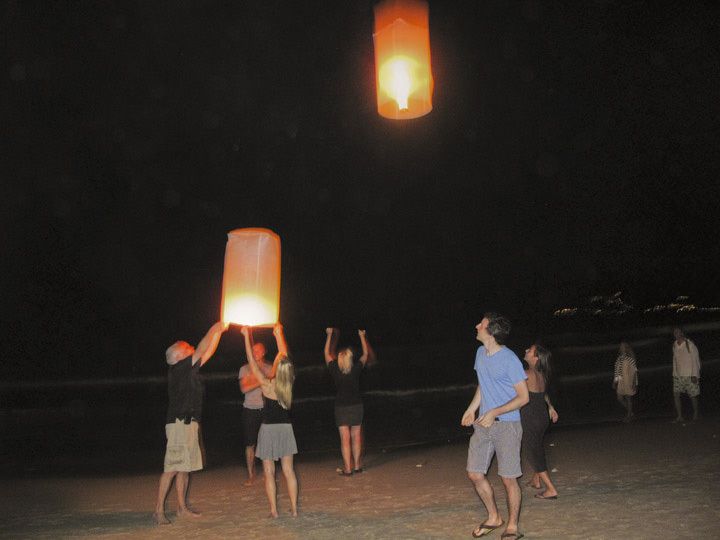 It was a night to remember, and sated me enough to hold me over until I finally make it to Loi Krathong.

Note: Photographing something like this is hard! Please excuse the sub-par pics. If you want to see some truly awe-inspiring images, go here!

Something Just Like This: Seeing Coldplay Live in Bangkok

Looking Back on Life in Paradise