Not two days after the Bikini Parade I was back on Seven Mile Beach facing down another mile- this one in the water. Treading water at the starting line staring down the endless beach to the finish line I wondered how I had gotten myself into this. It all started back before I ever arrived in Cayman, when I found the event while aimlessly googling. I bookmarked it for Mark, thinking maybe I would walk alongside and take photos if it wasn’t too hot (ha). But once I got here and the date drew closer it seemed to be the talk of the island and everyone from my boss to the other people in my rescue course were doing it, and soon enough I was peer pressured into paying $25CI to torture myself with exercise.

the brave soldiers lining up

Mark and I vowed to train and we did go out and swim half a dozen times, but never the full mile and never timed, so I was basically counting on adrenaline to get my through, and maybe hoping the power of 799 other swimmers would push me forward in the water somehow. I don’t know.

So anyway my mood cheered slightly as we arrived, as volunteers showered us with gifts of screenprinted swim caps, bottled water, and sunscreen applications! We checked our bags to be delivered to us on the other side, listened to way too many speeches and thank yous, had a reverend bless this public sporting event (this is the Caymans, after all) and then we were lining up at the starting line in the water. 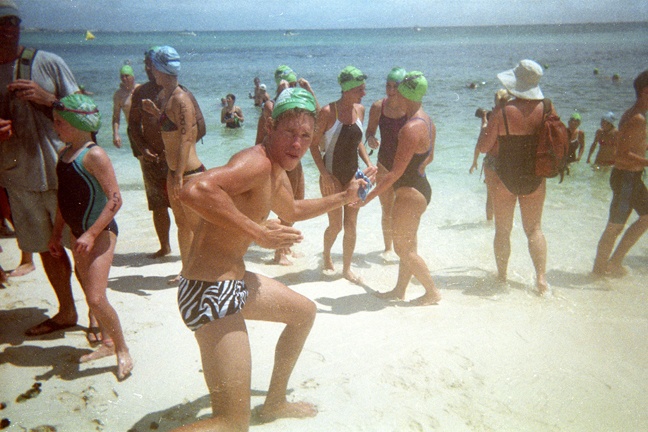 I started out slow and steady, mostly because that’s the only speed I’m capable of, and went strong until about 3/8ths of a mile when I started to get fatigued. Reaching the halfway point gave me a morale boost though, and I alternated between front crawl and breaststroke without stopping. At the final 1/8th marker I told Mark, who had sweetly been swimming with me, to bomb ahead while I finished up at my own pace. In the last few seconds I realized there was a girl of about 8 in front of me, which gave me the perfect boost of competitiveness to finish up strong. 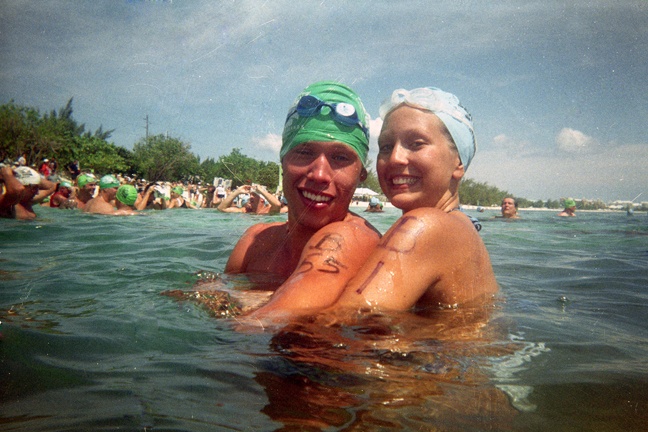 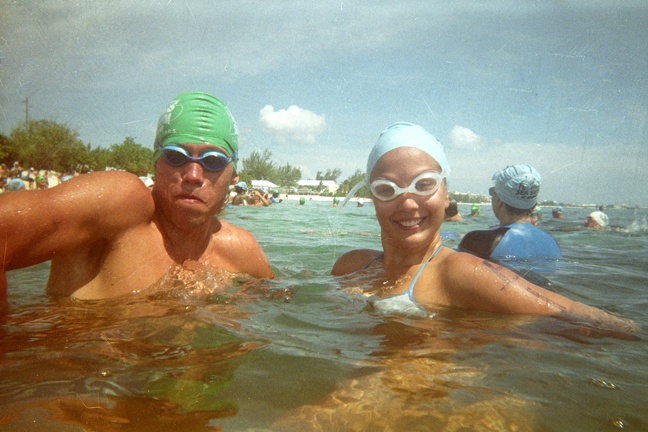 I exited the water at 44:04 after start time; number 491 out of 800. My loose goal was 45 minutes or less, so mission accomplished! As we exited the water, we were handed our place numbers and put through a shoot where volunteers gave us medals and handed us goody bags and took down our info. I felt like an Olympic celebrity! Then came the true moment that made it all worth it: the food tent. There was a massive tent with pizza, subs, and every kind of juice and soft drink available, all for free(!) with a big sign overhead stating “FOR ATHLETES ONLY”. Well let me assure you there will be few moments in my life where someone will accuse me of being an athlete so I am going to milk every opportunity. I felt like part of the insiders club while collected my reward, vindicated for all those times in high school I sat through a torturous sporting event for nothing while the team got fed pizza and snacks!

You probably don’t think it could get much better than a tent full of free food, but then came the awards ceremony. First came and agonizingly long bit in which each of the 15+ sponsors made a speech. Seriously. Then they gave out the awards for the first 4 male and female finishers, who ended up being Olympic swimmers, big surprise. Lastly was the random drawing, in which 1 in 5 people won a prize and 1 in 25 won a flight. Well once again luck was in the air because Mark won a free flight to Toronto! Again, seriously.

waving the flag while singing the Cayman National Anthem

Clearly the day was a huge success. Mark won a flight, we got tshirts and travel coffee mugs and oodles of other goodies, I got to see what it was like to be a on the other side of a sporting event, and we raised a bunch of money for charity and participated in a big community event. While 44 minutes might not be anything to brag about, I am proud that I was able not only to finish but to keep my body in continuous motion for nearly 45 minutes! All my initial fears aside I’m so glad I signed up. Next time they should really advertise the free food better. 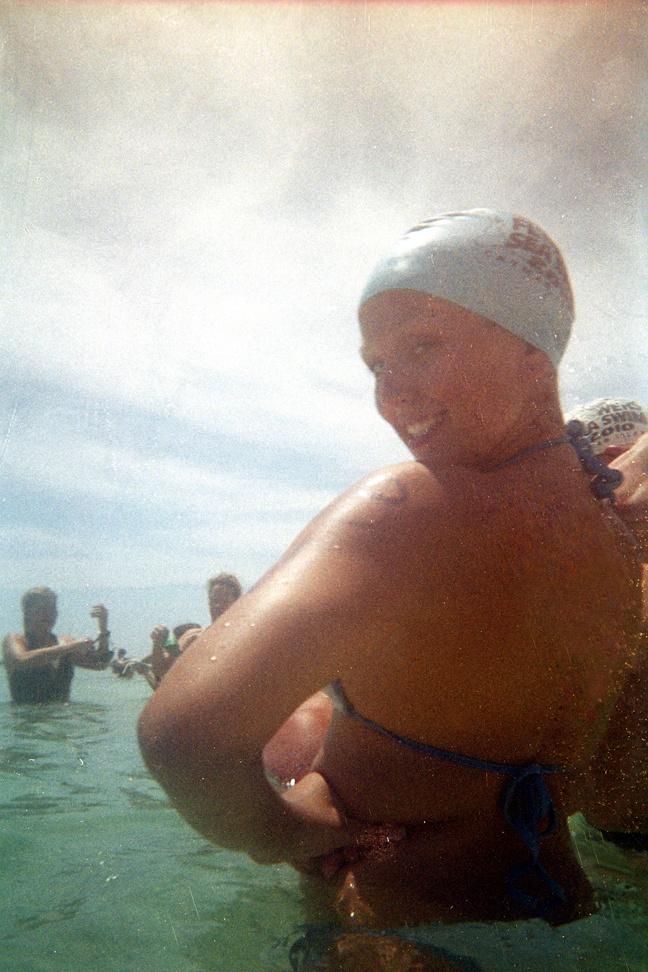 *Note: All photos for this post were taken with an underwater disposable camera (obviously). However, this is pretty much the worst quality developing I have ever experienced. Is it weird that I like it? ‘Cause I do.

The Last Stingray: My Cousin’s Week in Cayman