A Girlfriend Getaway to The Island of Women Part I

Where we’re at: I’m recapping my travels in 2019, including this trip to Mexico in November.

I think it was right around the time it dawned on me that Isla Mujeres translated to Island of Women that I was certain… this was exactly where I was meant to spend my thirtieth birthday, surrounded by some of the most special women in my life.

Beyond the beautiful meaning of the island’s name, there’s much to love about Isla Mujeres. It’s bustling but not overdeveloped. It’s cool but unpretentious. There’s bold Caribbean beauty and a welcoming local vibe. It’s traversed solely by foot and by golf cart, eschewing cars as a luxury for the mainland. And it’s a snap to get to — an easy ferry ride from Downtown Cancun, one of the most accessible airports in Mexico.

After three days in the long, skinny island’s more remote and laid-back southern strip, we packed up our golf carts and headed to the island’s buzzy north end.

Here, we ditched the golf cart rentals — we’d be in the prime location to walk to beach clubs, restaurants, murals, shops, yoga studios, and nightlife. What more could eight chicas want from a girlfriend getaway in Mexico?

I absolutely loved our time in each side of the island, and was thrilled we split it this way. Even if you base yourself entirely in one spot, as most travelers likely do, don’t miss out on at least a day or two of renting a golf cart to check out the rest of this vibrant island.

While this was my third trip to Mexico (all three in 2019!), I had few destinations to compare it to. Still, already, Isla Mujeres stood out all on its own. This isn’t Cancun: independent hotels outnumber mega-resorts and all-inclusives. And this isn’t Tulum: no one’s trying too hard to be trendy.

For us, it was just right: good vibes and a perfect balance of things to do and places to see.

Because space is at a premium in the north of Isla Mujeres, options were limited for where to put eight lovely ladies. Most of the larger properties I could find were in the middle, residential area of the island or the more rural, villa-heavy south.

So I was tickled when I found this penthouse apartment located right in the heart of town.

With five bedrooms, five and a half bathrooms, a rooftop kitchen and dining area, and a shady plunge pool, we had plenty of room to sprawl out. And we truly were in the middle of it all — steps away from all the cute restaurants and colorful beach clubs we’d fastidiously starred on our Google Maps.

However, this little beauty was not without some drama! Upon arrival, we were met by the property manager… and another group who had also booked the place for the same dates. Yikes. We think that because we had booked on Airbnb and the other group had booked on Booking.com, we were given priority (since Airbnb has harsher penalties for hosts who cancel bookings). The whole thing was kind of awkward so we put our bazillion bags down to mark our territory and, with a reassurance from the manager that it was ours, we ran off to our day off diving.

It turns out it got a little ugly with the other group refusing to leave and the police being called to remove them!

Awkward. Well to be fair, I’d have been crushed if I was the one being kicked out, too — because there really isn’t another property like it in this part of the island.

While we felt really bad their trip hit a snag, we sent out some good energy to the other group, and then settled into our new home for the next four days!

And as we watched the sun set from our balcony, we knew — it was time to hit the town! (After a chambong and a joss shot or two, of course.)

We headed for dinner at Tres Mentiras, a hip little Mexican restaurant on the main drag of Avenida Hidalgo, a pedestrian only street. While the food was fabulously traditional — why mess with success? — the cocktail list was fun and innovative. I ordered one that came garnished with a piece of popcorn, a la one of my favorite bars in Las Vegas. (Where, in fact, we just celebrated Heather’s 40th!)

It was the perfect choice.

Speaking of fabulous cocktails, I have to shout out Lola Valentina’s, across the street from Tres Mentiras, where we actually ate dinner our first night on the island after picking some of the girls up at the ferry and before heading back down to the Shell House.

This place probably has the sleekest vibe on Isla Mujeres, while still remaining totally pretention-free. I could not get over my favorite cocktail here, which actually had avocado in it. The menu has some really fun twists on modern Mexican, and they have an amazing brunch menu that those of us not rushing to early morning flights on our last morning lingered over.

We were in Isla, as its loyal fans call it, the first week of November, which is coming out of the low season, and so crowds were thin — great for deserted beach walks, less great for wild nightlife. In addition, the island’s most popular hostel had just been sold to the Selina brand, and was closed for renovations.

I was a little bummed when I realized the nightly beach bashes we’d expected weren’t going to happen as planned, but the great thing is that with a group of eight you bring your own party!

…And, you get up early for a morning beach walk the next day.

After Amanda and I’s early morning stroll, the girls who were awake met for breakfast at Chaya & Cacao, the cutest cafe on the entire island.

We posted up in the breezy patio and ordered just about everything on the organic, plant-focused menu while ooh-ing and aah-ing over ever design detail.

After breakfast and some wandering through the cute little shops of downtown, we were ready for a beach day! Isla Mujeres isn’t known for the size or proliferation of its beaches — but it is known for the beauty of them. We were thrilled to be so close to Playa Norte, the largest beach on the island, covering the northern stretch.

Our Airbnb came with complimentary admission and free welcome drinks at Guru Beach Club, one of the chicest spots we’d peeped.

It being low season and us being a group of eight girls, we were pretty sought after customers everywhere we went on the island — by the end of the trip, we couldn’t even stand the sight of a free tequila shot. (When the bartender tried to offer us them as our “welcome drink,” Steffi protested, “that’s not very welcoming…,” much to all of our amusement.)

It was the perfect spot for us to spread out, grab some nibbles, order cocktails, and start splashing around.

One thing that we loved is while the beach club didn’t actually stretch all the way up to the water (and there’s quite an eyesore of a megaresort across the bay in front of it ) they were happy to let us take the fancy glasses our drinks came in out to sea to sip and swim. Which once again led to a new GoPro Dome photoshoot — this crew certainly loves our new cameras!

Okay, minor rant alert. One thing that gave me pause on this trip was how many people — mainly other US travelers — approached us to ask some variation of “who’s getting married?” I think it says a lot about our culture that the only reason we can imagine that a group of grown women would get together to celebrate would be one of them getting hitched.

Don’t get me wrong I love a bachelorette party (LIKE MORE THAN AVERAGE HI ENGAGED FRIENDS PLEASE LET ME PLAN YOURS) but why should that be the only time we get together?

I hope this is the first of many get togethers for this squad.

I’ll drink to that! Back on land, we finally succumbed to the welcome shots, after all. And our very own professional photographer Heather — who has understandably been so burnt out on shooting that she goes iPhone only for all our trips the last few years — felt inspired enough to capture all these magical and hilarious moments for us.

Can I tell you, once again, how happy it made my heart to see these friends from different phases of my life meet and not just get along but actually absolutely adore each other? It was a Leslie Knope spirit animal, female friendship lover’s dream come true.

A few shots down, a spontaneous portrait session even took place with Heather grabbing the girls one-by-one and turning Guru into our own set. I love these photos of my beautiful friends so much (and if you visit the Cayman Islands in the future, you should hire Heather to take some for you, too! Shots beforehand highlight advised.)

If you ever want to know where my mind drifts when I go to my mental happy place… it’s this photo below!

Part II coming at ya soon. Have you ever been to Isla Mujeres? 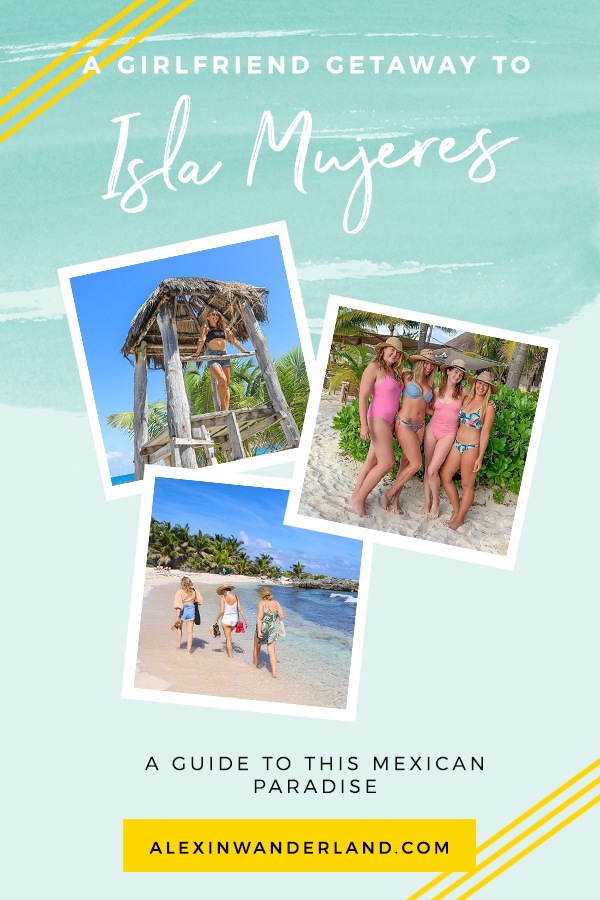 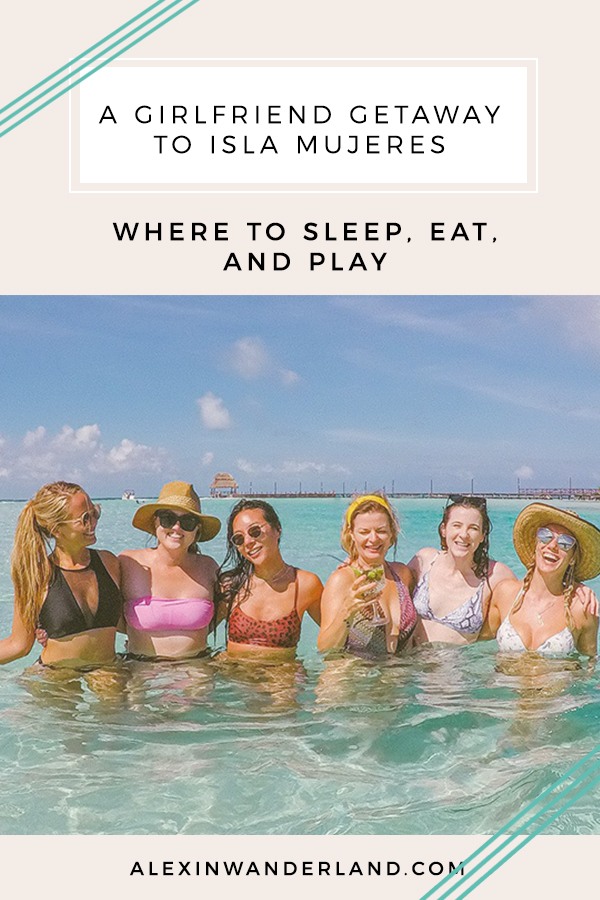 The Wanderland Guide to Downtown Cancun

The Wanderland Guide to Tulum Pueblo: Where to Eat, Stay and Play