For those of you just joining us, I am recapping, in excruciating detail, my family and friends’ trip to visit me in Thailand over the holidays. We started in Bangkok, then hopped down to Koh Tao, and now we’re in Koh Samui! At the rate I’m going I hope to complete this post series by Christmas 2012. 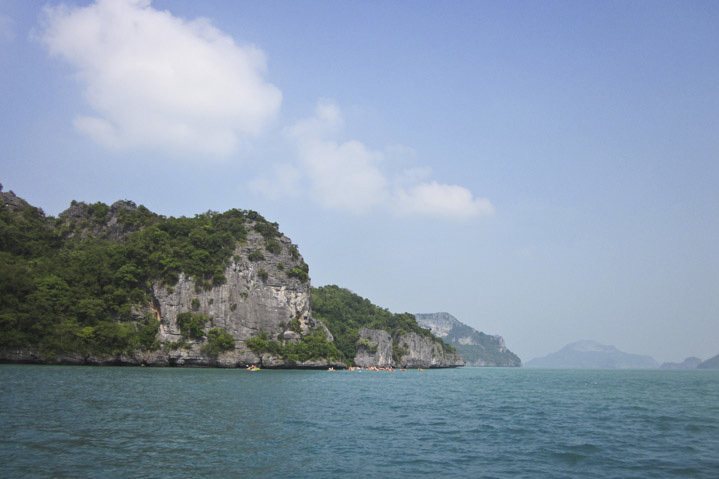 Our true purpose in coming to Koh Samui wasn’t just to relax by beautiful pools — that, we could do anywhere. The real reason we came can be summed up in 42 stunning islands — Ang Thong Marine Park. Ang Thong is a protected area and a national park made famous by the cult backpacking novel and later movie, The Beach (the movie was filmed in Koh Phi Phi, but the book was set in Ang Thong!). The fairly strictly enforced protection of the area makes it a very special spot. 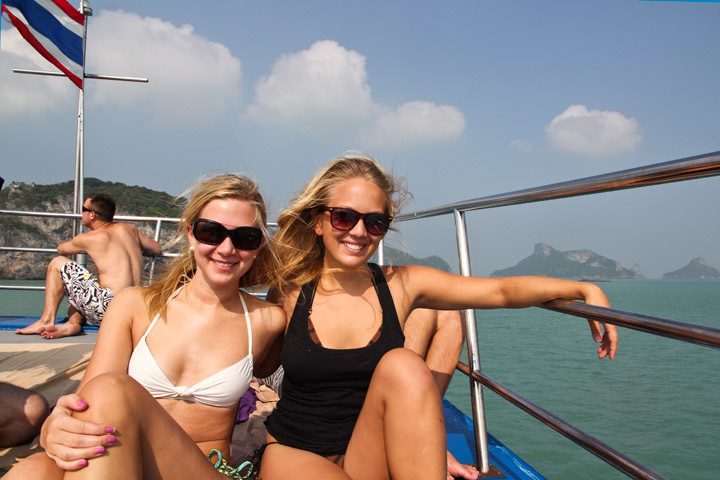 Mark and I were lucky enough to visit the park back in August on an overnight dive trip from Koh Tao where Mark was working as a divemaster and I was…. freeloading. That’s a pretty uncommon way to access Ang Thong though — the vast majority of visitors are visiting from the much-closer Koh Pha Ngan or Koh Samui. And thus our party of seven made our way to Koh Samui for an indulgent day trip to this stunning archipelago of islands. 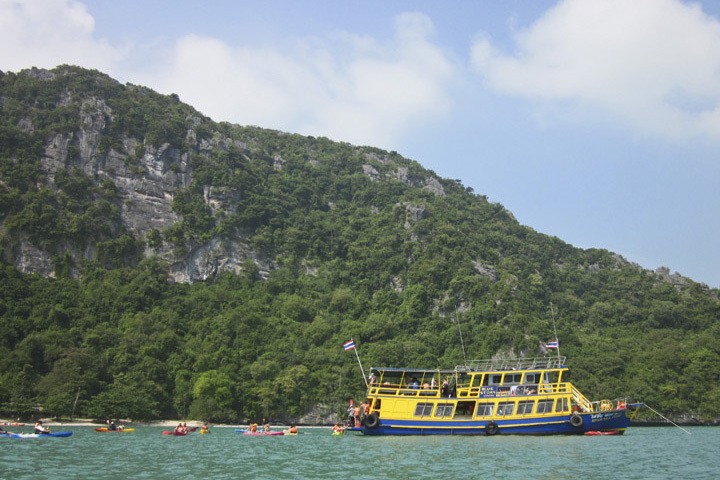 After my usual frenzy of exhaustive research I settled on Blue Stars Kayaking and Snorkeling to be our tour group for the day. They seemed to offer a good balance of price, smallish group size, and time in the water on a kayak. After being picked up from our hotel and transported to the pier we had about a 1.5 hour journey to the park. Weather had not been the most cooperative thus far on our trip but thankfully the sun was shining bright on this morning. 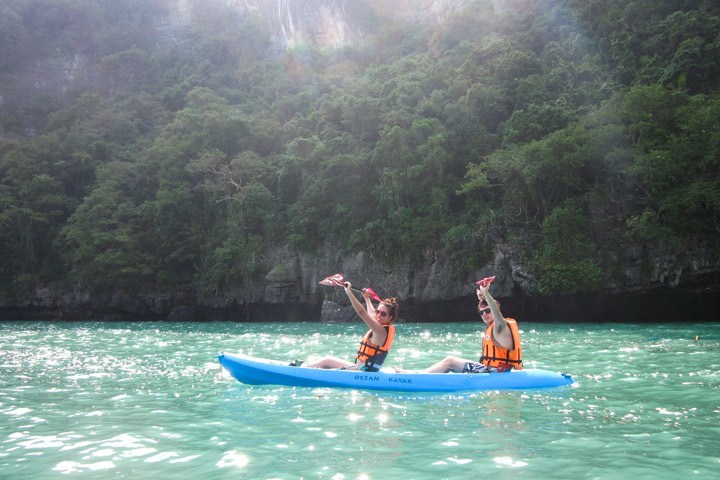 When we arrived in the park the boat was split into two groups that would switch off between kayaking and snorkeling. As the groups were being split up something triggered a memory of a Tripadvisor review that advised being in the first group to kayak. I couldn’t recall the reason but I jumped on it anyway! 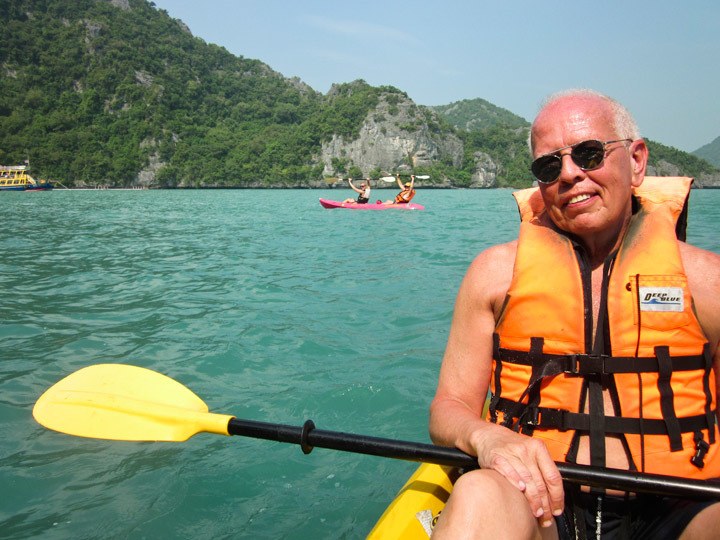 Our odd-numbered group split off into double kayaks. Steffi and Anton, my mom and sister (who obviously insisted on a pink vessel), my dad and I, and Mark — the lone wolf. 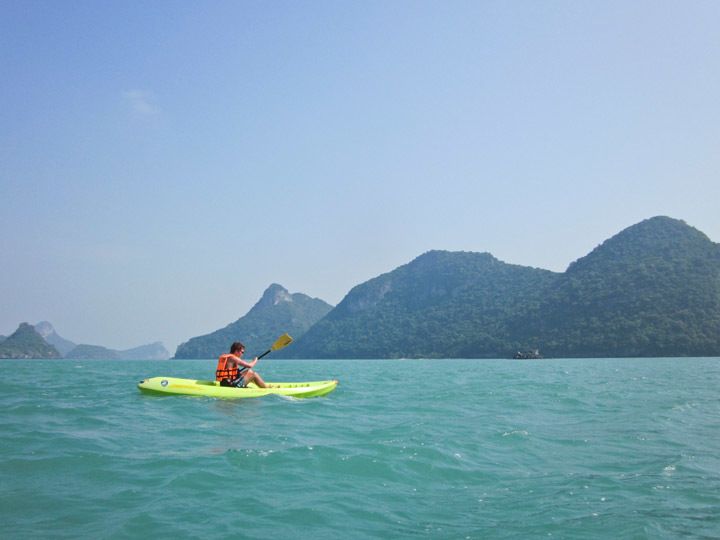 Luckily I think he enjoyed showing off and speeding ahead of those of us with two paddlers. Or one paddler and a photographer (very important job), in my own kayak’s case. 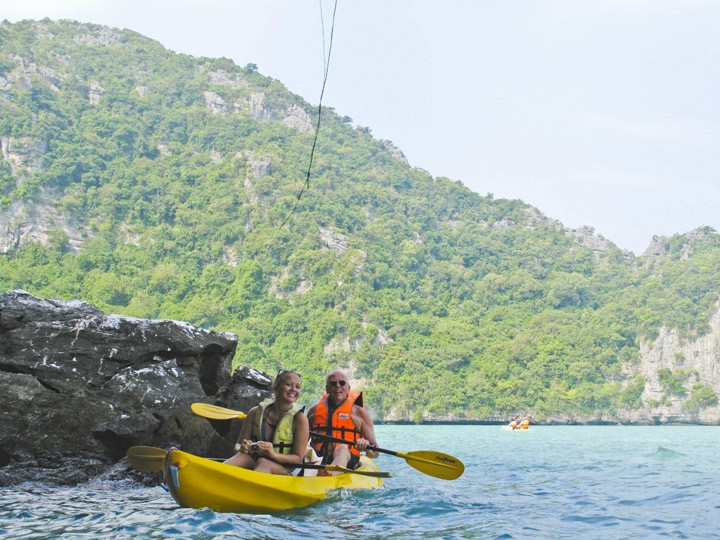 What I was most looking forward to about this tour was getting up close and personal with the islands. Going through the larger caves was definitely a highlight. The ones that were smaller actually freaked this adrenaline junky right out — I was screaming in terror imagining the bills for the reconstructive surgery I’d have to have if a rogue wave smashed us into rock-ceiling. 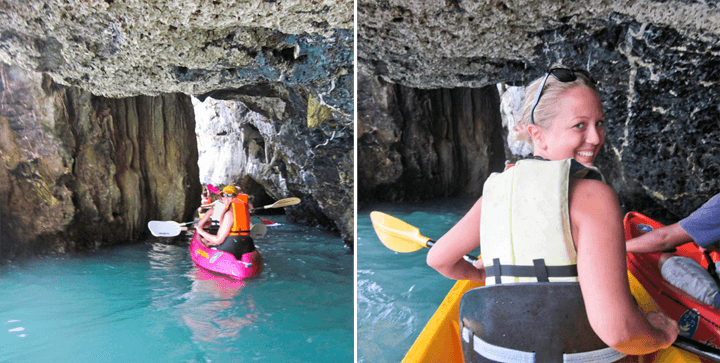 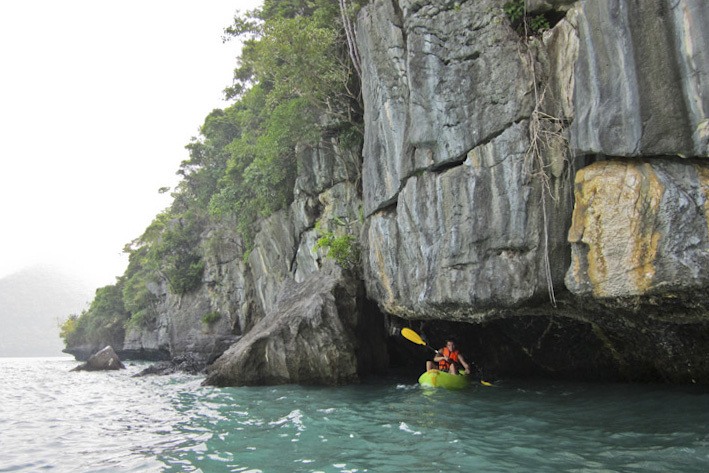 Unfortunately despite the blue skies the conditions were still a bit iffy (almost every other trip that week had been cancelled!). The wind was pretty rough, the water levels high and the waves choppy. With everyone’s safety in mind I think the usual kayaking route was cut short and we missed out on a lot of the cool caves and paddle-throughs. At this point we were so grateful for sun nothing could get us down! 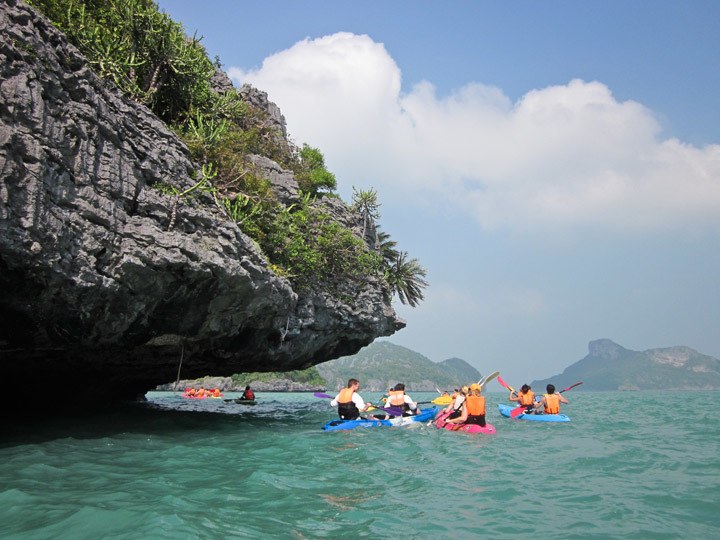 In lieu of more paddling our group leader brought us to a beach tucked into a tiny cove called Ko Mae Ko. This was no bleached and combed resort beach- it was rugged beauty at its finest. 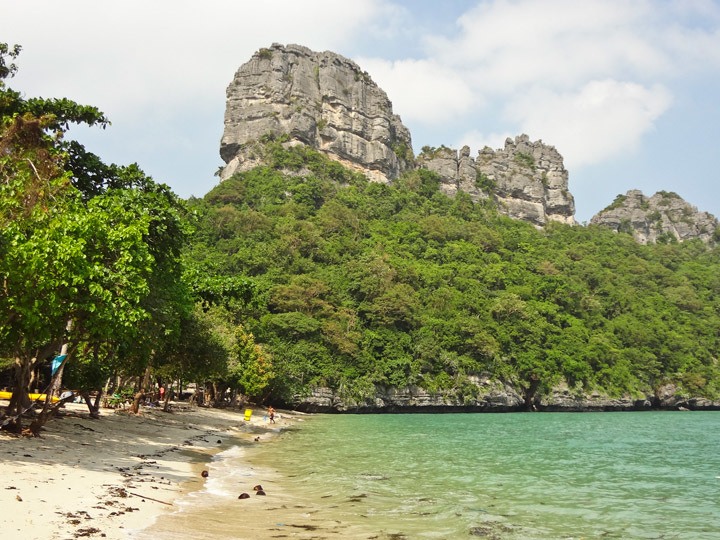 We rushed to snap the first group picture of the entire trip before my sister went to lounge and work on her tan and the boys took off on a one-on-one kayaking race battle. 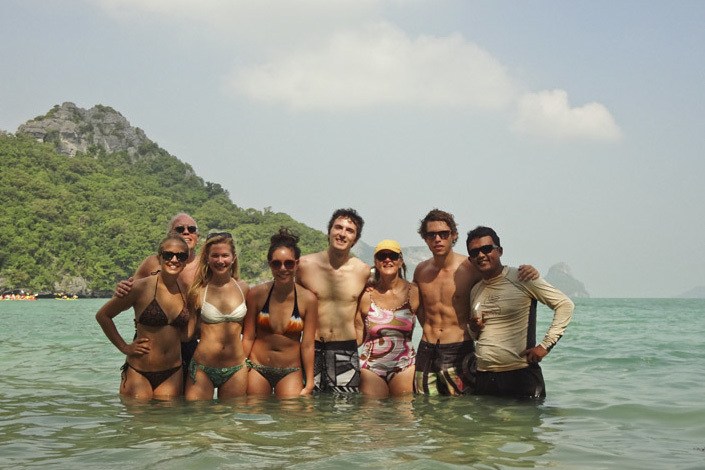 It was a nice detour, and soon we were paddling our way back to the Blue Star boat for a lunch buffet that was surprisingly hearty and good. 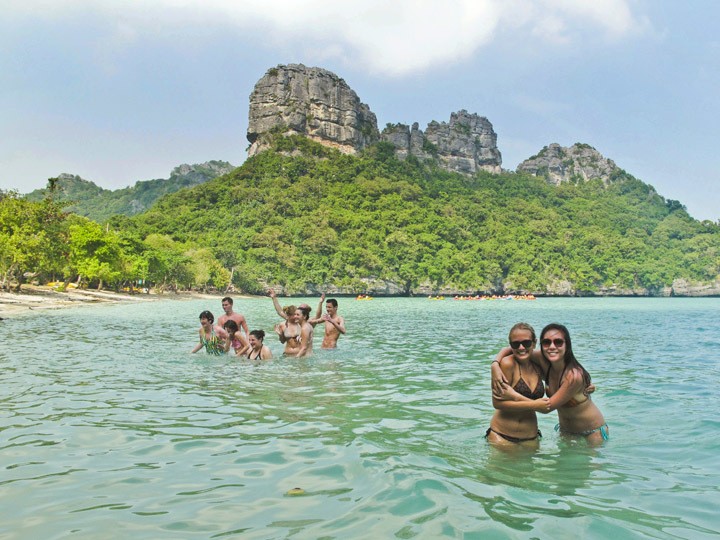 After lunch we were meant to take our turn snorkeling. However those mediocre kayaking conditions translated to hopeless snorkeling conditions. I was in no way disappointed by this as it was replaced by my favorite part of the tour- deck jumping. Surprisingly with about 20 people onboard our group was the only one to partake in this activity. In their defense, we may have frightened them with our rabid enthusiasm. Anton became the MANton when he was the first to take the plunge. 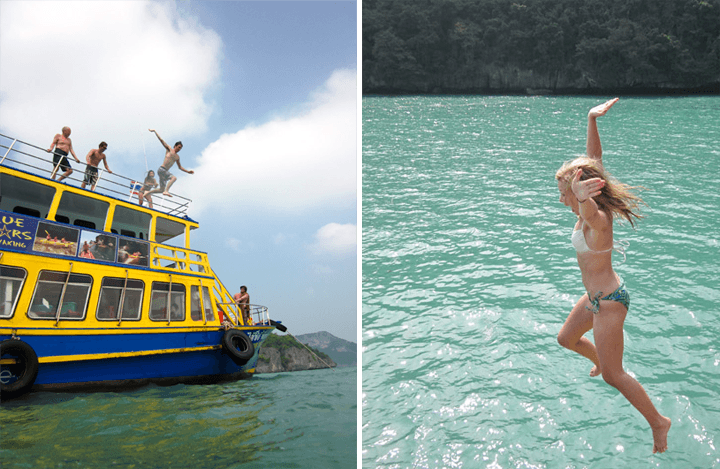 We even got my dad, whose age I will not disclose here for inheritance reasons, to get in on the fun. He’s told me before that he has a personal policy that as long as he can keep up with the crazy stuff his kids are doing, he knows he hasn’t gotten too old yet. 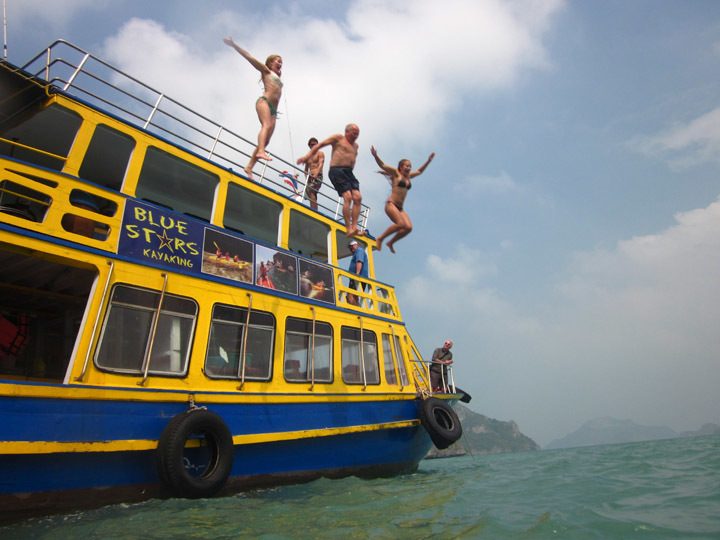 After that performance, you’d think anyone in the under-25 age category might be a tad embarrassed not to participate. And yet it took serious goading to get Steffi to even step out onto the ledge, at which point I made her swear on our since-first-day-of-freshman-year-of-college friendship that she would jump on the count of three. Below left is “ONE,” below right is “TWO…” 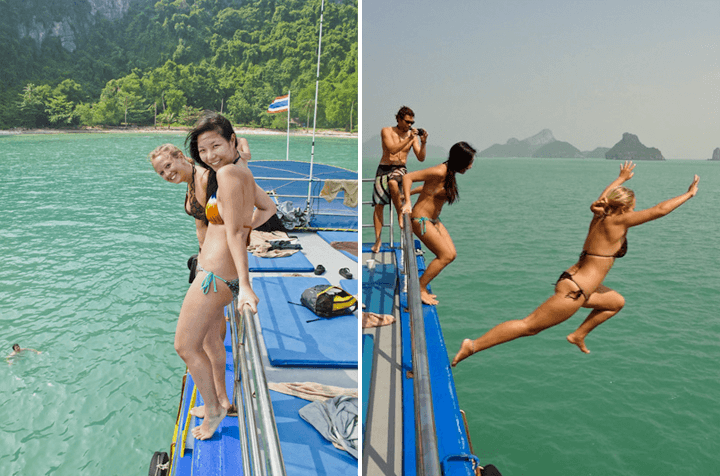 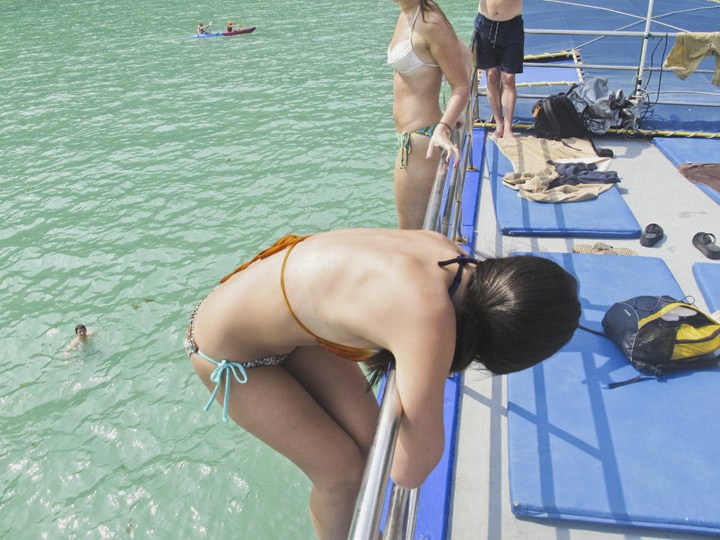 I guess I can expect the other half of our BFF bracelets to be returned in the mail promptly, Steffi. 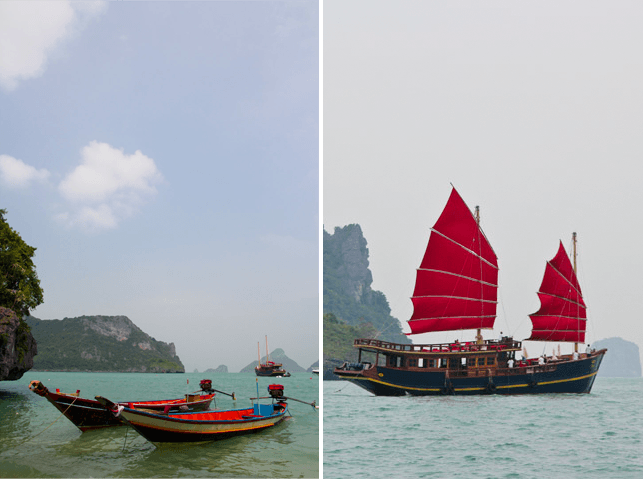 After both groups had their go at kayaking, we were onto Part III of the day- visiting the Green Lagoon, also known as the Emerald Lake. Mark and I hadn’t been here during our first visit to Ang Thong and I was giddy to see it. This is probably the most touristy part of the marine park, as evidenced by the tiny shack selling snacks and drinks and the intricate metal pathway built from the beach to the lagoon. 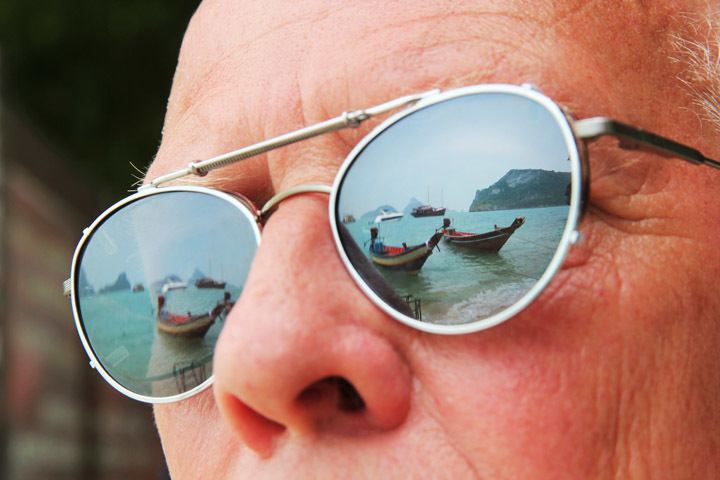 It is prohibited to swim or play in the lagoon, so this is strictly an admire-and-photograph affair.

The Green Lagoon is actually a saltwater lake lying visibly above the sea level that you can peek at over the island ridges. Even with the slightly murky conditions we spotted jellyfish and anemones below. 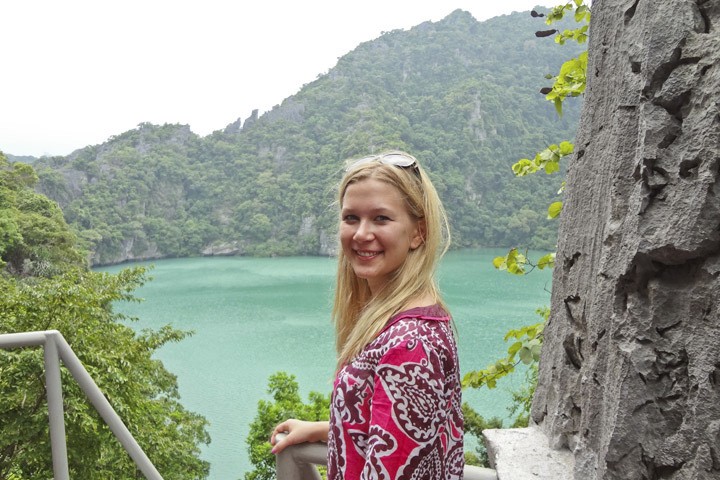 The metal pathway also led to a stunning viewpoint from which we could truly appreciate the unique geography of the park. The teardrop islands stretched out as far as the eye could see. 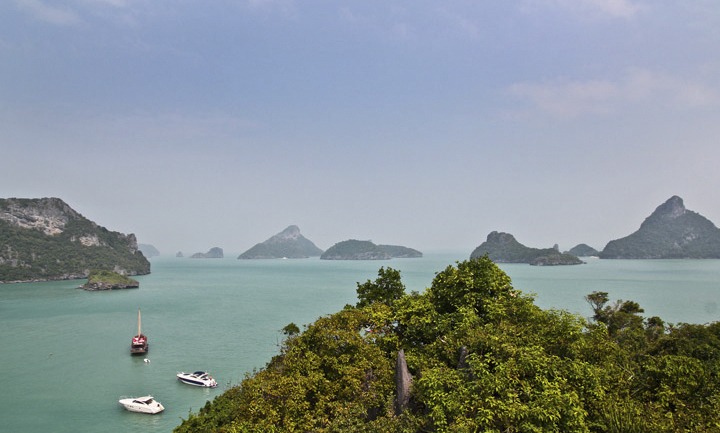 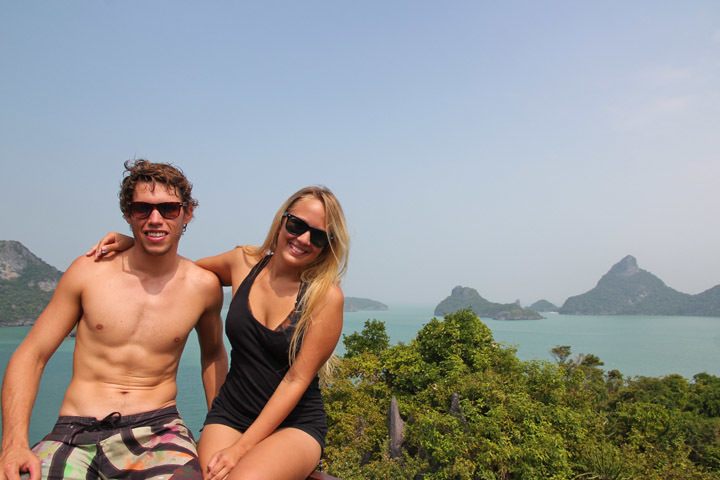 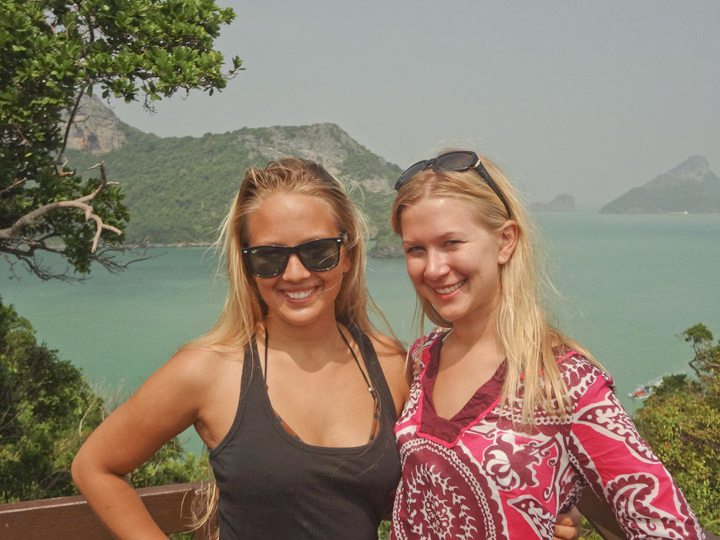 From what I gathered from reading reviews of the tour, weather conditions impacted our trip pretty heavily- we arrived back at our hotel about an hour early. Despite any snafus, we had an amazing time enjoying the weather and the beautiful scenery. We didn’t feel herded around like cattle (my biggest fear whenever I’m on a group tour), we had a great lunch, and we goofed around a lot.

However, no tour company is perfect. When I called to confirm the night before we left for Koh Samui, we were told that our reservation was lost! When I forwarded them the confirmation that they had sent me, they told me there was no room left. After much negotiation we elbowed our way back in to the tour. I’m very glad that Blue Star did the right thing, but there was some serious unnecessary stress going on. There also seemed to be a tiny bit of confusion and disorganization throughout the day, but I chalk that up to the bad conditions and rough week the company had having to cancel so many tours. 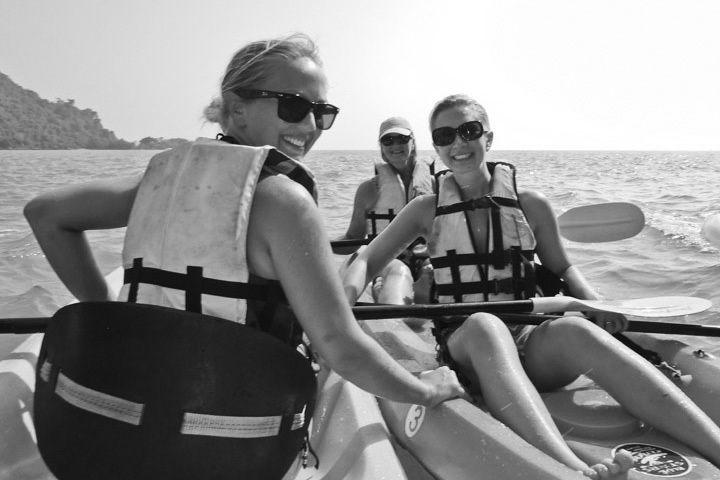 If you too would like to kayak through Ang Thong Marine Park, visit Blue Star for more information. Prices are now 2,200 baht per person, with discounts for children and groups as small as three people. Prices include hotel pick-up and drop-off, a light breakfast, a hearty lunch, snorkel and kayak gear, and all entrance fees. Note: Blue Star in no way paid or perked me for this post. Just sharing a review I would loved to have read before booking! 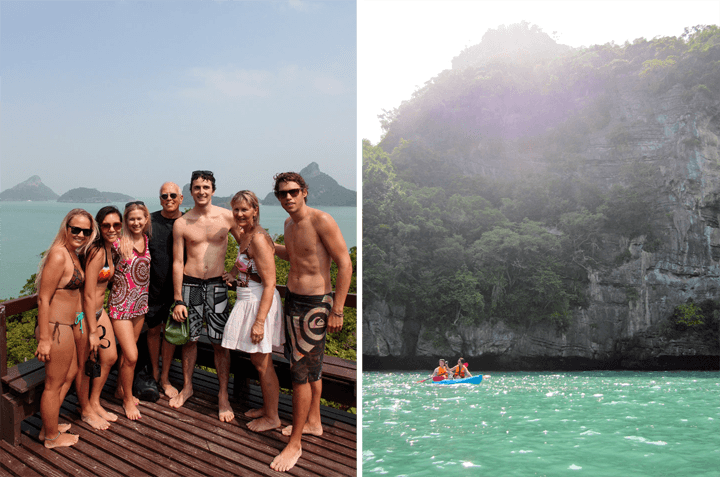 Splashing Out at The Outrigger Koh Samui A Cool Night at Bar Ice Samui
18 Comments...