Finding The Beach at Ang Thong

It was only my first weekend in Koh Tao, and I was already on a boat chugging away from it. We were heading to Ang Thong National Marine Park, a protected area of islands in the Gulf of Thailand and also the setting for the infamous Alex Garland backpacking novel, The Beach. The park is mostly visited by day trips from Koh Samui and Koh Pha Ngan, but Mark was working as divemaster for a new overnight trip by Roctopus Dive in Koh Tao. Not willing to let him have all the fun, I tagged along to document the trip. 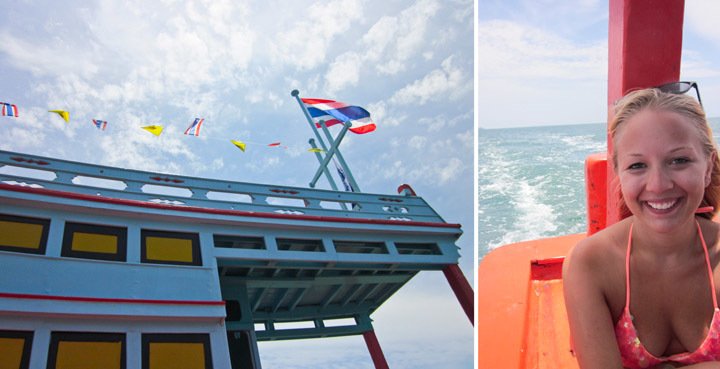 The ocean was rough when we left Koh Tao, and so the journey took several hours. It was a beautiful moment when we first laid eyes on the 42 islands that make up the marine park rising dramatically out of the sea. Unfortunately, I was saddened but not surprised to see fishing boats in what is meant to be a protected area. 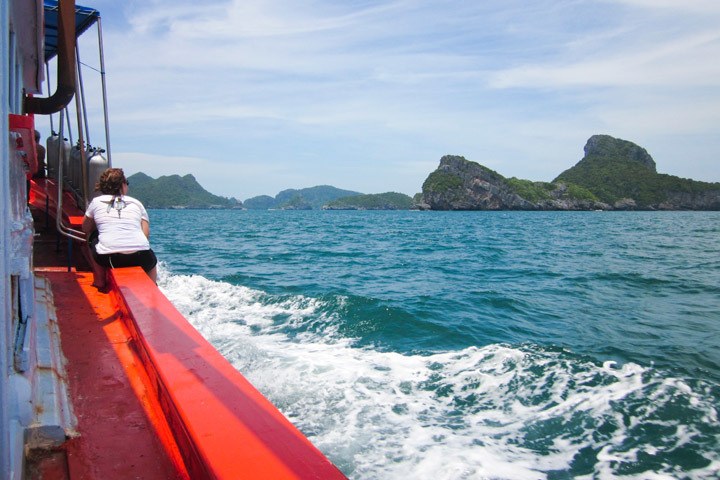 Our destination was Ko Wua Talab, which acts as Ang Thong’s little tourism hub. There is a visitor’s center, overnight accommodation, and the kind of beaches that postcards are made of. 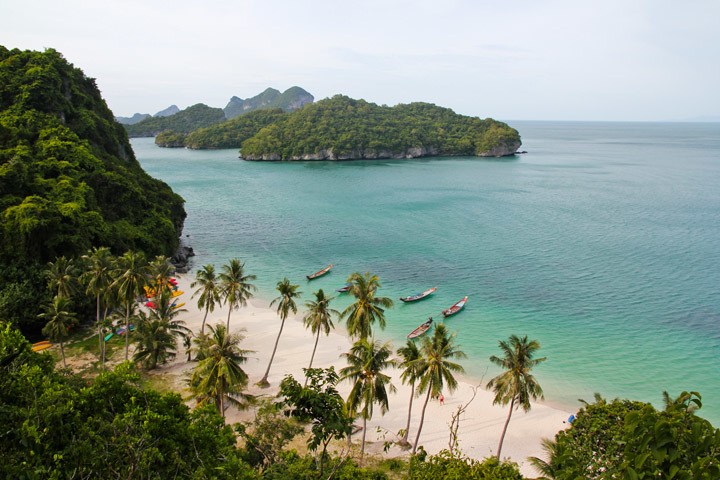 What Wua Talab doesn’t have are bars, travel agents, and the other trappings of many Thai islands, leaving only unspoiled nature for amusement. The easily accessible area is small, holding a beautiful beach backed by a picturesque valley and flanked by two tall cliffs.  I can totally see why Tilda Swinton would want to start a hippie commune here. (What? You’re saying that movie 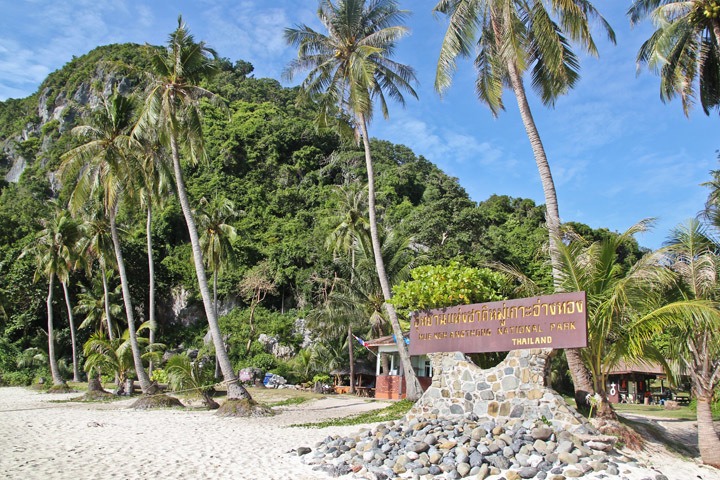 There are two options for resting your head at night: charming basic cabins or camping in tents. Both were included in Roctopus’s tour price, and so we chose the cute bungalow. 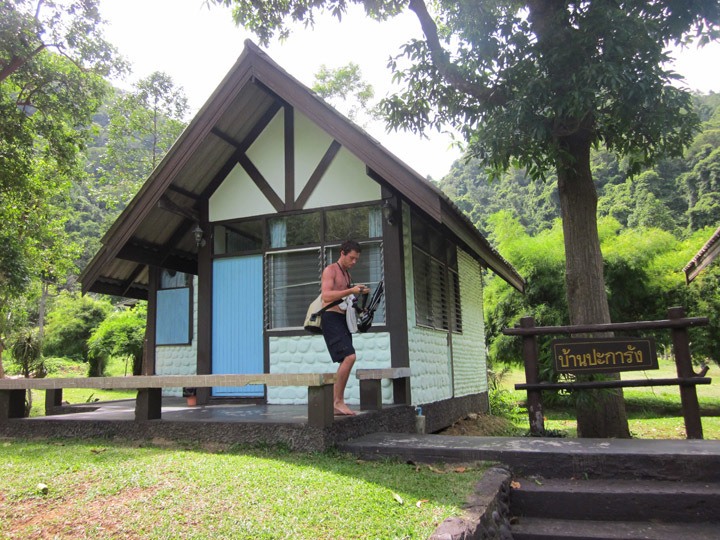 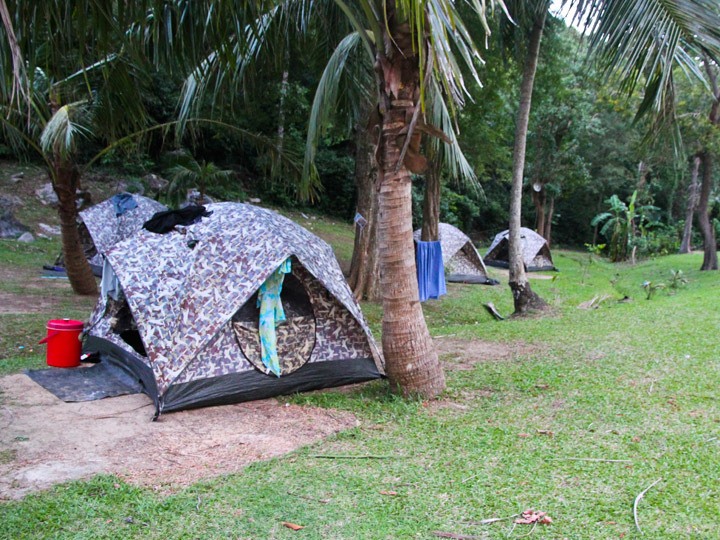 Having no real town, no roads, no shops, and only the most basic tourism facilities, Ang Thong was like no where I’ve ever been in Thailand. Showing off the kind of keen metaphor skills that I hope will make me a great travel writer some day (please tell me the sarcasm isn’t lost here), I said to Mark that everyone looked like groups of apes from Animal Planet outtakes. Sitting in groups, moving slowly, snacking on things. But what was the rush? There was nowhere to be but right there. 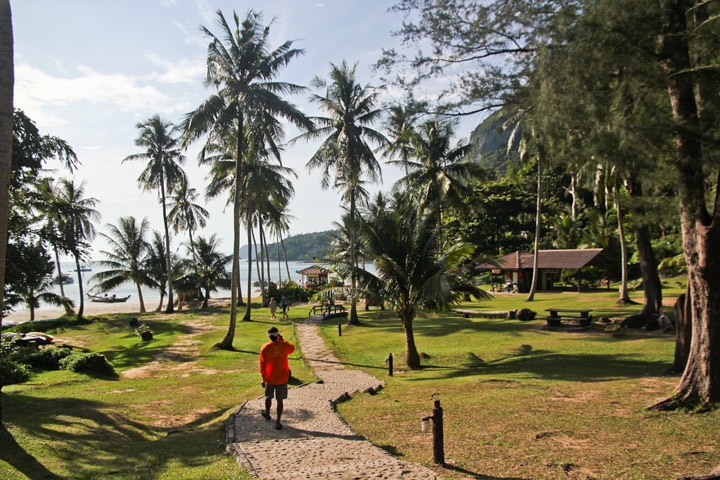 As appealing as it seemed to relax in the valley and on the beach like a laid back orangutan, we decided to hit the water. The park ranger had warned that the main beach was only good for snorkeling very early in the morning, but we decided to explore anyway. After all, Mark pointed out that I had worn my most practical water sports bikini. (Sarcasm again!) 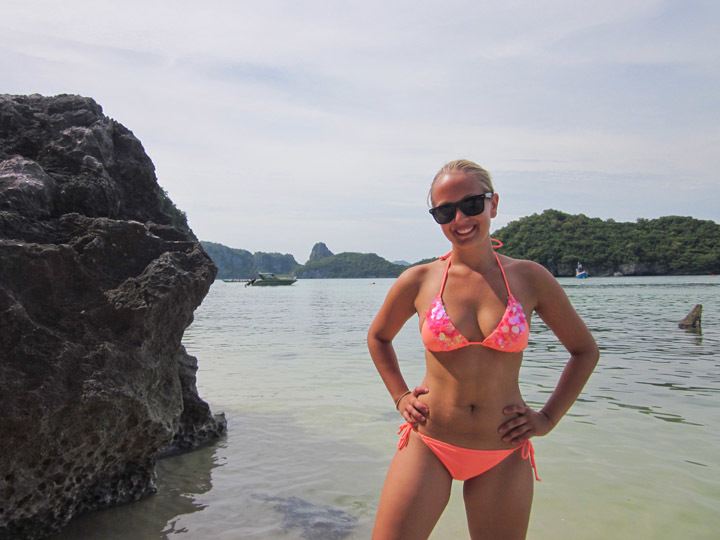 The park ranger was right. The boats bringing day trips to and fro has stirred up far too much gunk to be able to see anything. Unless you are staying overnight and go first thing in the morning, don’t bother snorkeling here. 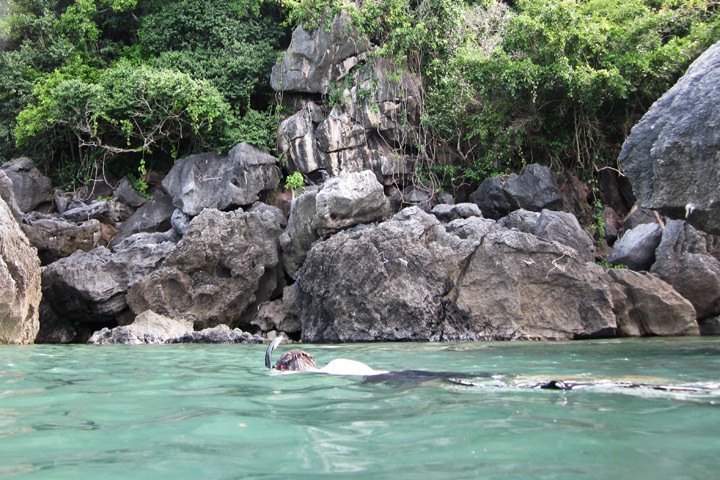 A better option is to rent kayaks and check out some of the other beaches. They cost 500 baht and are usually not included in tour prices, so if you are visiting the park to be sure to ask your tour operator if that’s part of the package. A few people in our group did this and had a great time. 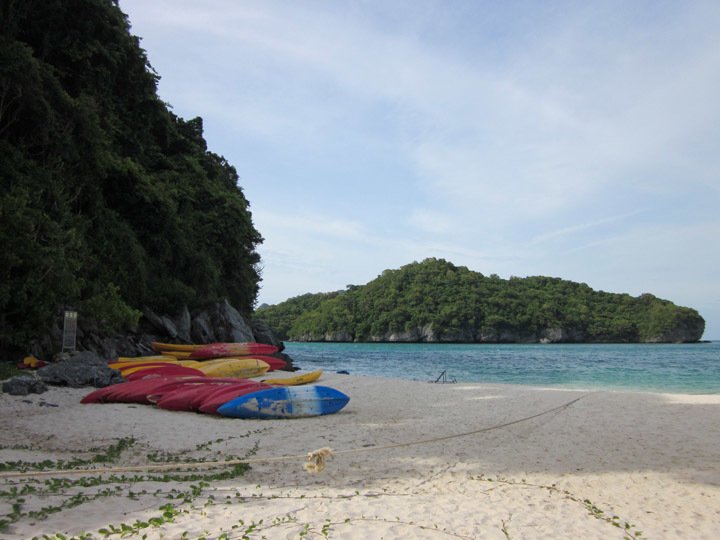 We chose the free option for entertainment: hiking the the island’s viewpoint, hailed by Lonely Planet as the most beautiful vista in all of Thailand. It’s 500 meters of pretty treacherous trail. Luckily, I had brought my most practical hiking shoes once again. My flip flops. 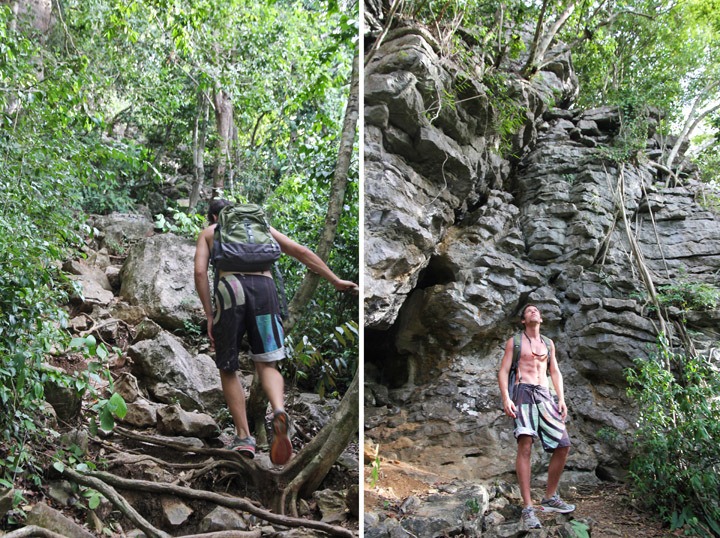 Despite being overcast, it was a hot, humid day. The climb was broken up by viewpoints every 100 meters. They only got more and more beautiful, egging us on to the top. 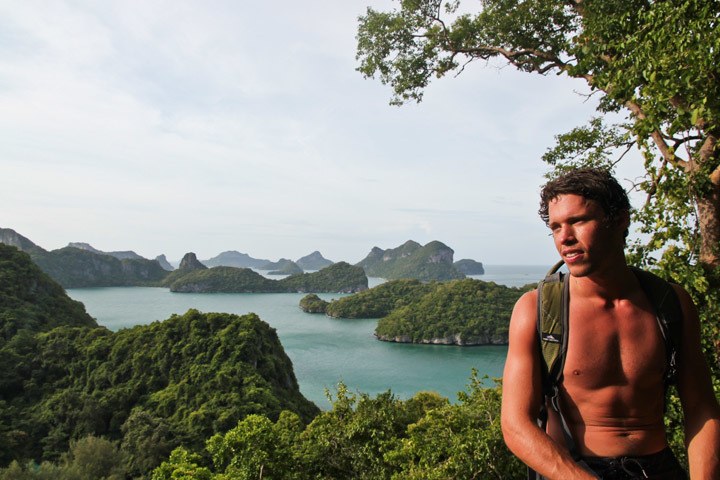 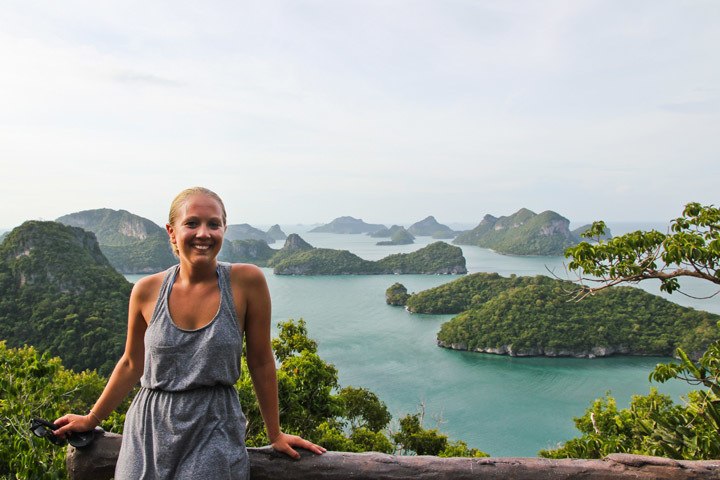 When I saw what we had to do to get to the top viewing platform, I burst out laughing. We would have to cling for dear life to a thin rope laid out over sheer cliffs plunging to the jungle and ocean below. Only in Thailand.

Thank goodness I had those flip flops. 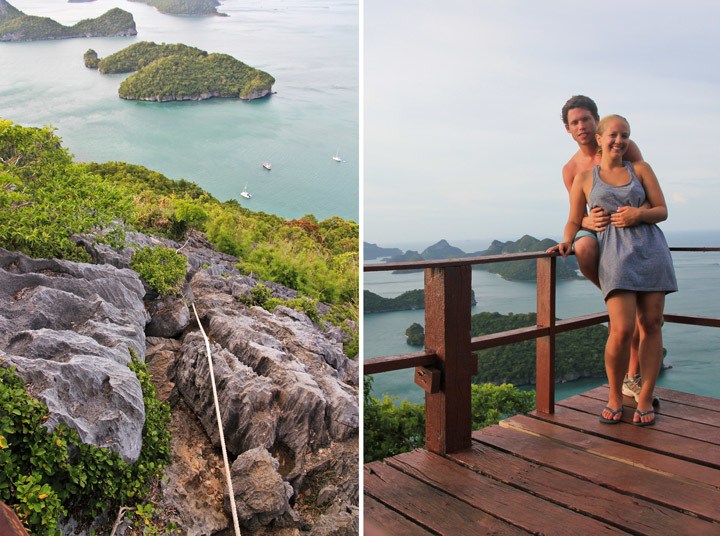 putting the self timer to use

The views were worth it. We remarked how amazing it would be to watch the sunset from this vantage point. Unfortunately, with no lights and the trail being what it was, it would also be a suicide mission. So we headed back down before dusk. 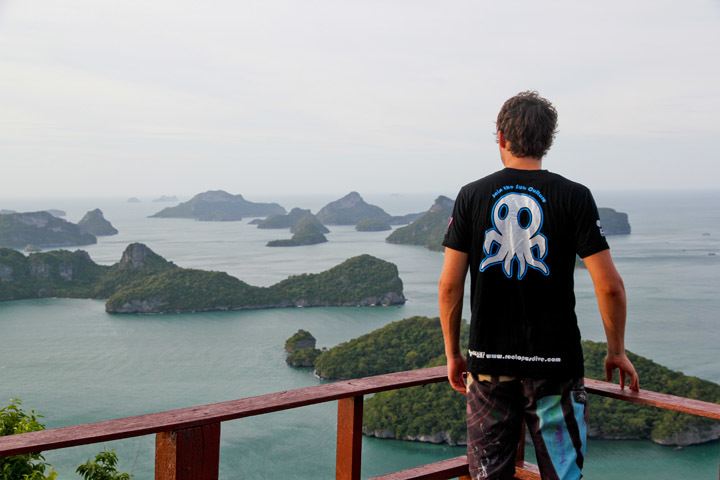 Mark sporting his Roctopus t-shirt, the most popular garment in Koh Tao

As I was struggling down the trail, I saw Mark stop dead in his tracks ahead of me. Then I heard it too: the sound of monkeys playing in the jungle around us. Soon we spotted them, black furry things jumping from branch to branch. They even had a teeny orange baby monkey with them! I love zoos as much as anyone, but there is nothing like seeing a wild animal in its natural habitat. 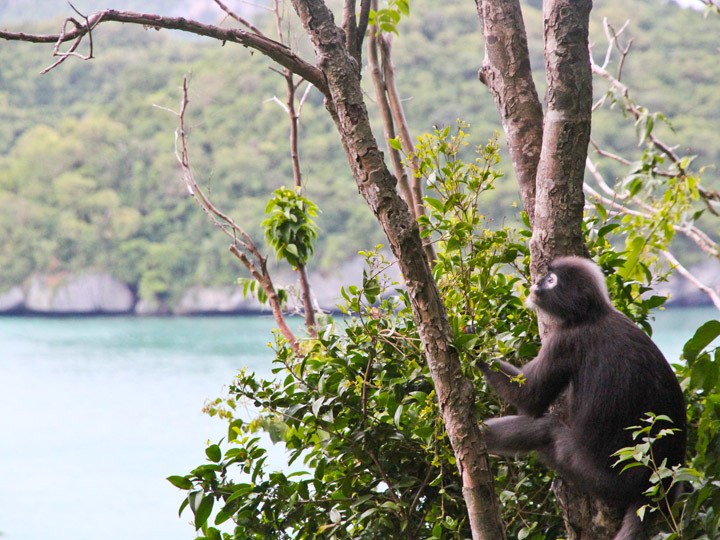 When we reached the valley we ran over excitedly to tell the group what we had seen. But they were a bit distracted watching their own monkey show! We plonked down on the grass with the rest and watched the little guys play as the sun went down. The day trippers had all gone home, giving us a private viewing. 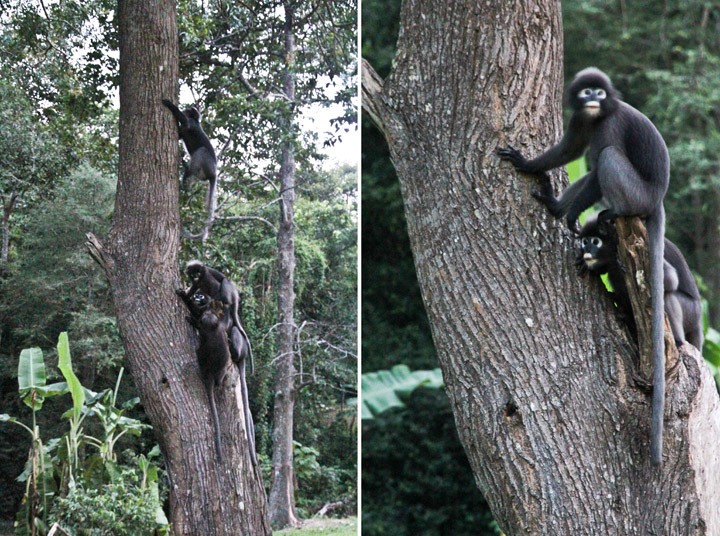 After such an active day, we weren’t bothered a bit by the lack of evening activities on the island.  We were going straight for the bungalow. And good thing, because we had a big day ahead of us… Stay tuned to hear about our diving adventures in the marine park! 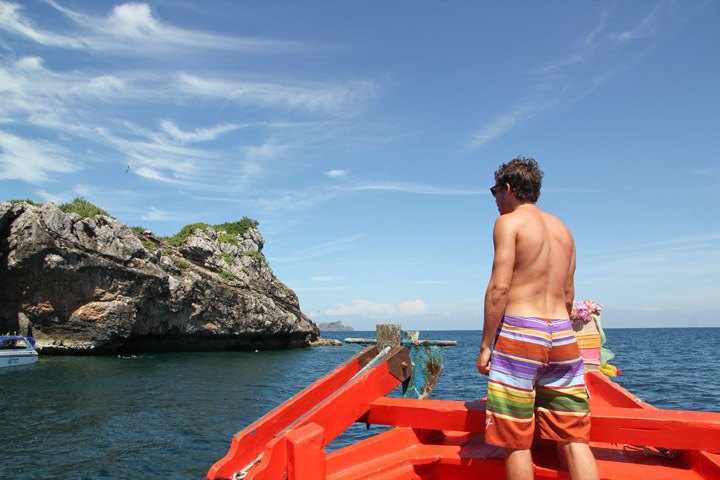 I didn’t take as much video as I had planned to, but I did have a few clips that help explain what a special place Ang Thong is. It’s only 30 seconds, so enjoy!