I told you all about how I got to Ayutthaya, but I didn’t really let on to why I stopped there. I went for the same reason that any traveler goes: for the temple hopping. Ayutthaya is one of Thailand’s former capitals and reportedly once one of the largest and most impressive cities in the world. Today it is a popular as either a day trip from Bangkok or a stop on the northern tourist trail, as visitors come to admire the unspoiled grassy ruins. While the temples have extreme historical significance in Thailand, I admit that my main interest was in exploring them from a photographic perspective.

Though it is possible to explore the ruins via tuk-tuk or mini bus, I have dreamed of visiting Ayutthaya since I first came to Thailand in 2009 and that dream has always involved a bicycle. The majority of the archaeological park is contained in central Ayutthaya, which is basically a small river island, making bicycling a feasible and pleasant way to get around. The major ruins that are off the island are accessible by bridges or by a sunset boat cruise. Right next to my guesthouse on Naresuan Soi 2 I was able to rent a bicycle for a mere 40 baht ($1.25). This is the cheapest bicycle rental I’ve ever found, even cheaper than Cambodia or Laos. Even more amazingly, there was no deposit needed, not a passport, not a bit of cash. Just trust and a handshake and I was off. I like Ayutthaya already. 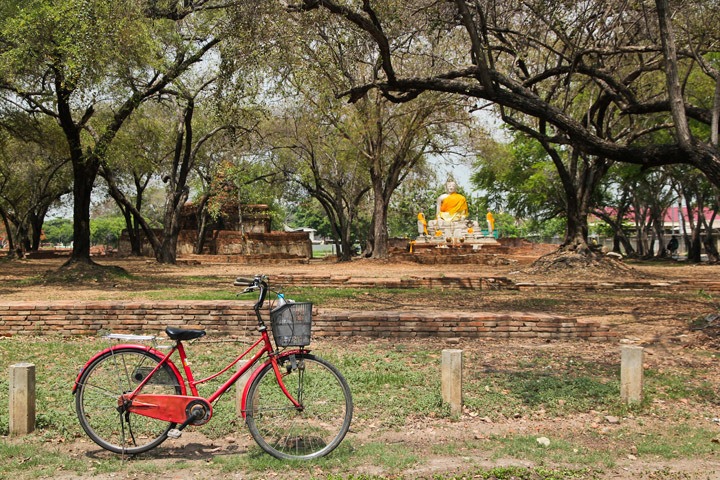 My first stop of the day was a temple that contains Ayutthaya’s (and reportedly one of Thailand’s) most photographed images: an abandoned Buddha head. Wat Mahathat (50 baht admission fee) was built in 1374 and is a relatively intact and large site. 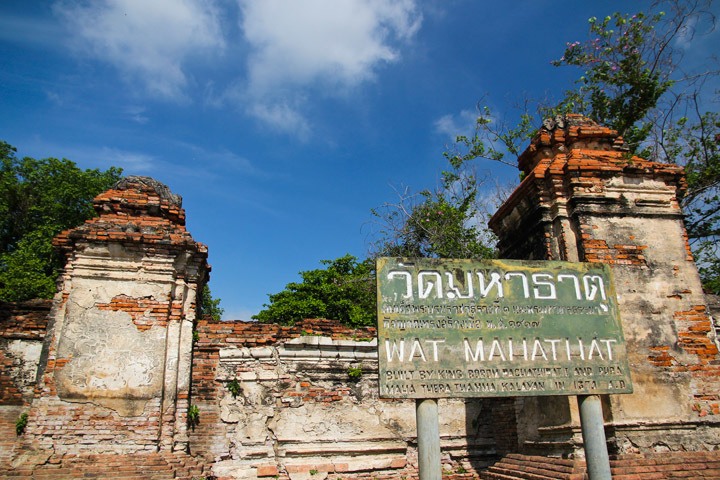 One thing that struck me about all the ruins in Ayutthaya is that they were very… unsupervised. Aside from the sleepy ticket takers there were no guard or caretakers roaming the grounds. And as there were very few fenced or roped off areas, there were only occasional signs to keep visitors from “climbing on the monuments”. 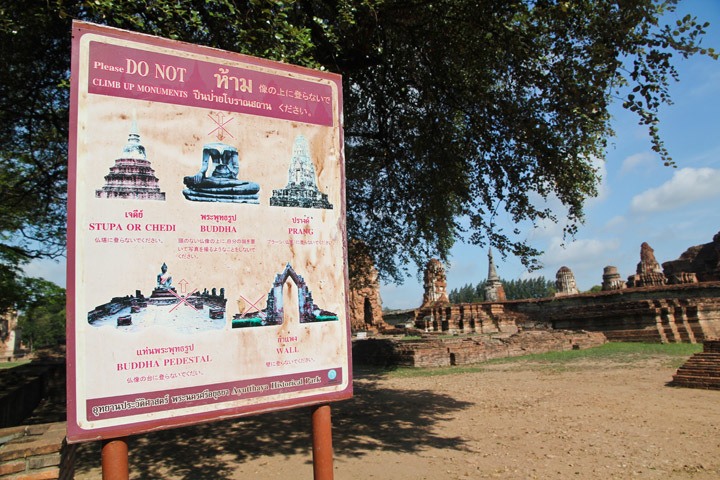 Combining the lack of signage and fences with the complete lack of crowds I often had the sensation that I had stumbled upon an otherwise undiscovered ancient city. I think this was good timing on my part- April is the hottest month of the year in Thailand (regularly over 100°F) and so most people don’t spend it cycling around an ancient city like a maniac. Also, I left super early in the morning to avoid tour groups from Bangkok. 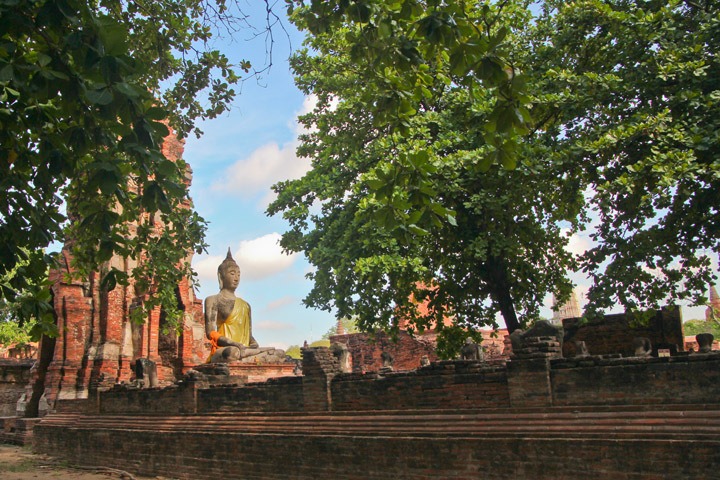 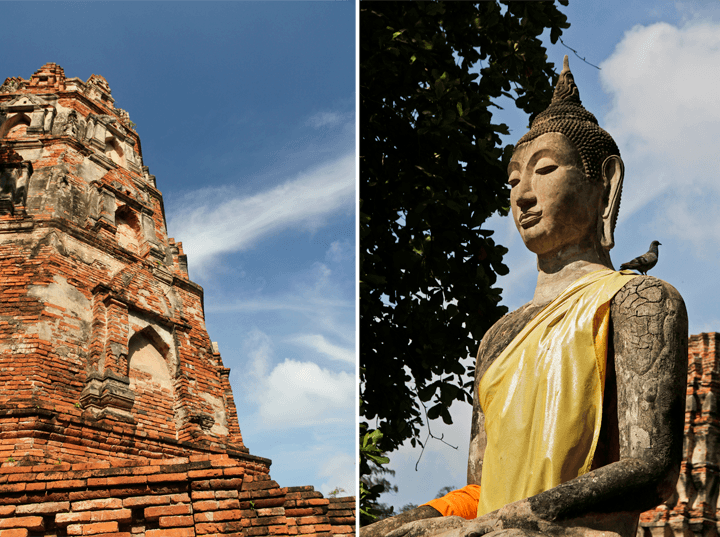 At this point in the trip I realized I was really going to have to start working on my self-portrait taking skills. I really like having photos with people in them, which can be a problem when you’re traveling solo sans tripod! 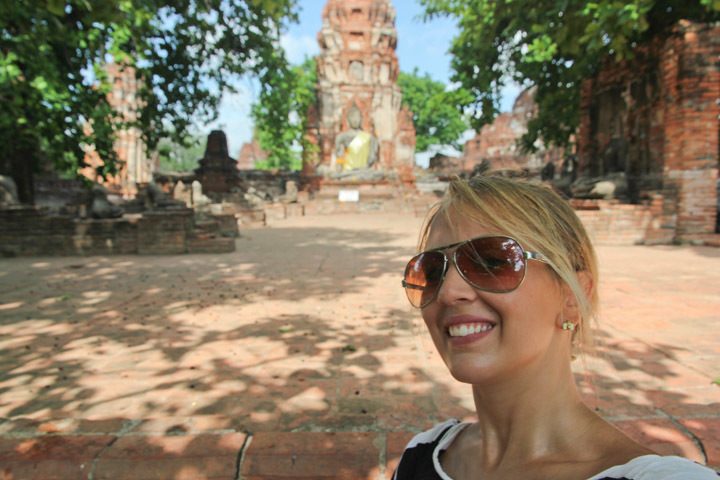 I quickly stumbled upon the main event: the famous Buddha head tangled in a web of tree roots. I had seen endless images of this Buddha head but had a little shock when I saw it in real life: I had pictured it the size of a grapefruit but in reality it was enormous! 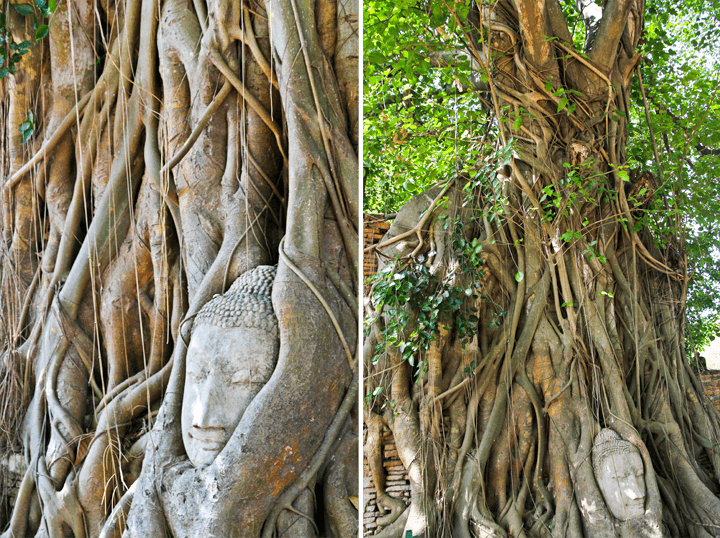 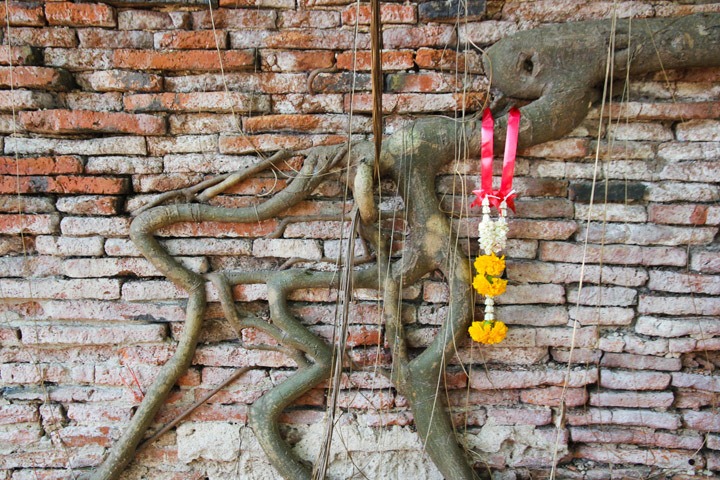 The size explains one of the theories of how the Buddha head ended up in it’s current state. While some say it was abandoned when the Burmese ravaged Ayutthaya, others believe that thieves tried to make off with the relic but it was too heavy and got left behind to Mother Nature’s devices. 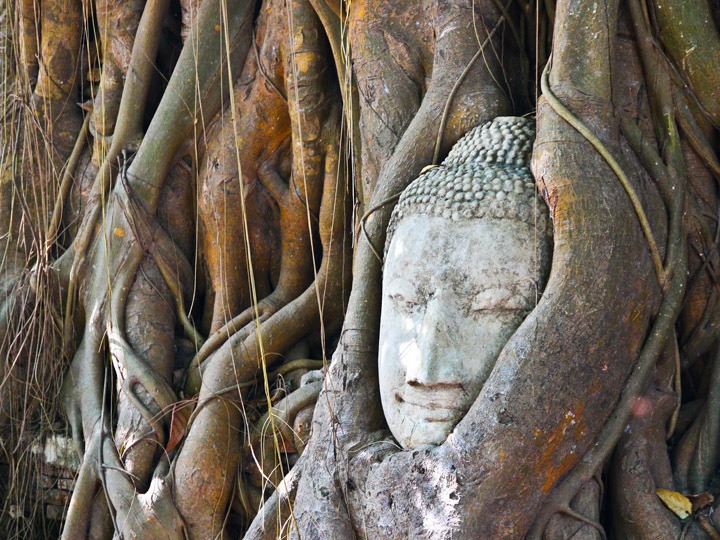 This slightly more successful self-portrait (I balanced my camera on a brick wall and used the self-timer) shows the massive scale pretty well. I smiled when I read the sign behind me that read:

PLEASE… DO NOT STAND OVER THE BUDDHA’S HEAD. (It’s insulting). 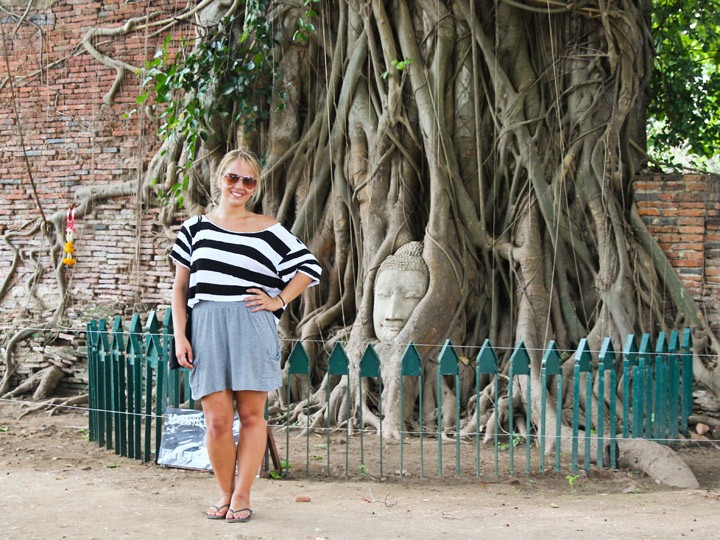 I was so grateful for the amazingly beautiful blue sky and fluffy white clouds that came out for my photo shoot that day. Nothing makes me want to hurl my camera more than a gray, blown-out sky. Isn’t this gorgeous? 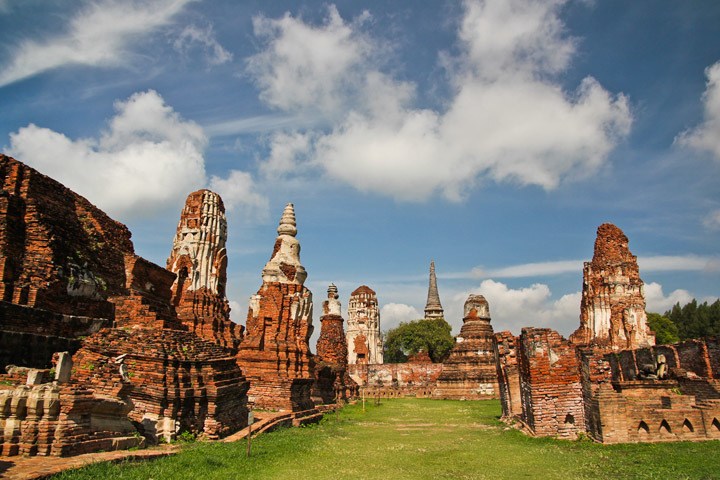 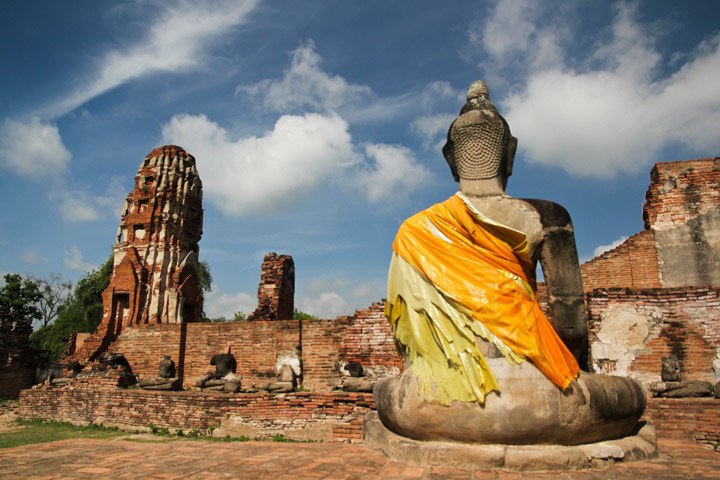 My next destination was right across a busy street. One of the fascinating things about modern Ayutthaya is that the city has just built up right around these ruins. So you can be standing at the foot of an ancient wat and look to your left and there is a 7/11 staring back at you. Strangely I found it charming the way history and real life intermingled. It reminded me of Athens, where you are walking through a major metropolis and look up and boom, there’s the Parthenon: symbol of the beginnings of modern civilization.

Wat Rarchaburana (50 baht admission) has a pretty dramatic history, as far as old temples go. It was built in the 15th century as a cremation site for two royal brothers who fought to the death for the throne. Then, in the 1950’s, looters made away with many valuable treasure, which prompted an official excavation that uncovered previously undiscovered rare Buddha images. 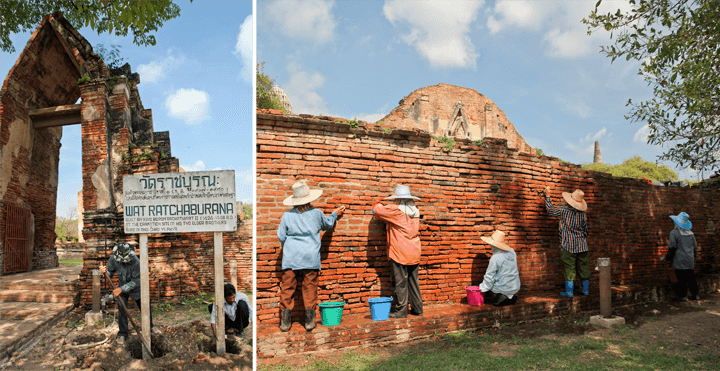 The temple was under repairs at the time of my visit, which I loved observing up close. No big fancy machinery here- just people working with their hands and colorful plastic buckets of grout. Inside the walls I didn’t find anything as fascinating- aside from this amazing framing angle. That one shot made this temple a worthwhile stop. 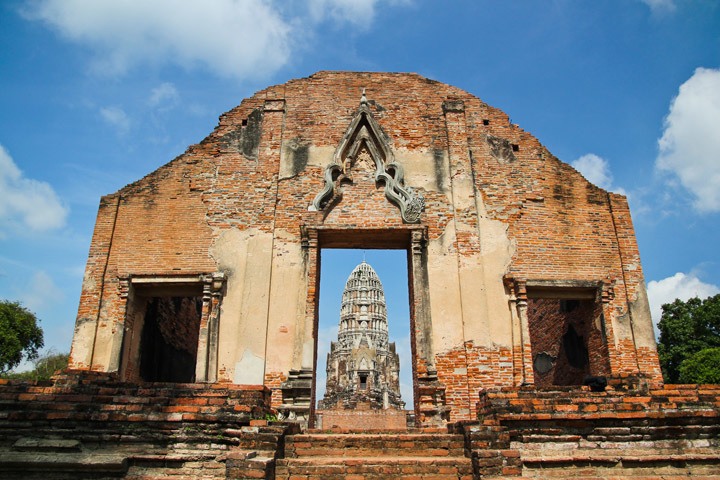 Also, Lonely Planet told me that this was the best preserved prang in the city. Thank God for Lonely Planet, or I wouldn’t always know when to be impressed by something. 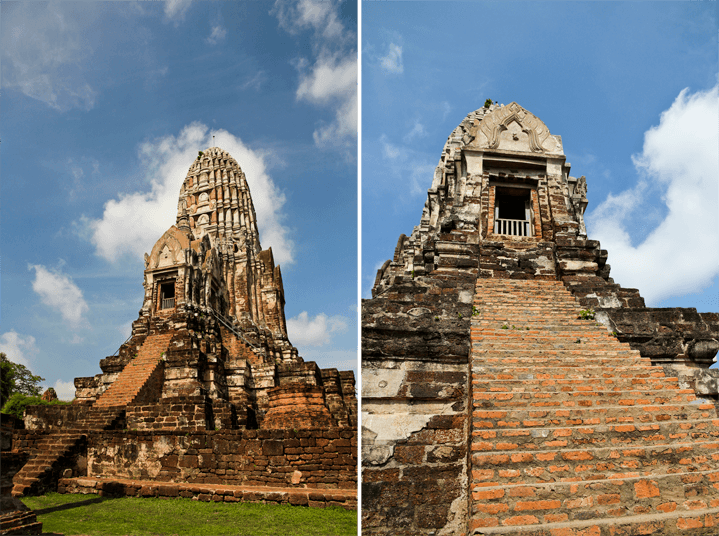 After a nice little ride along a lake I came to Wat Phra Si Sanphet (50 baht admission). This is often hailed as Ayutthaya’s most impressive complex, and it too has an interesting background. It was once the largest temple in the city and contained a 52 foot tall Buddha covered in 550 pounds of gold, gold that was eventually melted down when the Burmese conquered the city.

At the time of my visit all three of the stupas were covered in scaffolding. Some might find this a disappointment but I loved it! The natural wood of the primitive scaffolding echoed the scruffy plants found around the site, making for some beautiful images. 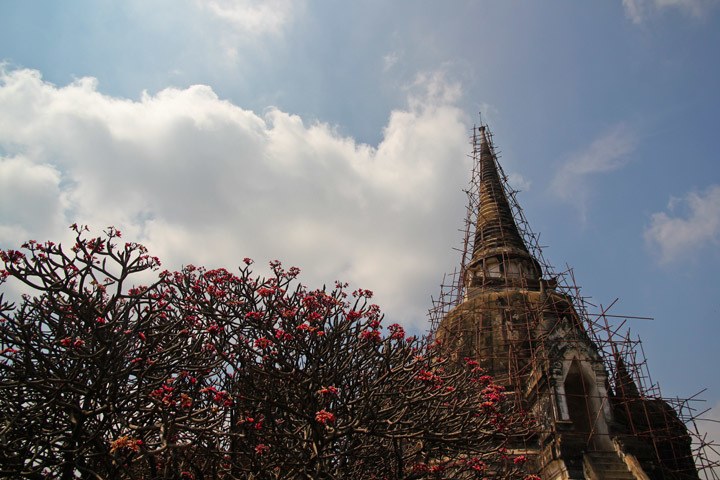 Adjacent to Wat Phra Si Sanphet is the Wihaan Mongkhon Bophit sanctuary hall, home to one of Thailand’s largest and most resilient Buddha images. In the 1950’s the Burmese government donated 200,000 baht to the restoration fund for this building in an act of atonement for Burma’s ravaging of the city 200 years prior. The Buddha really was impressive. See that tiny white dot over the Buddha’s knee on the right? That is a bird! It really shows the massive scale. 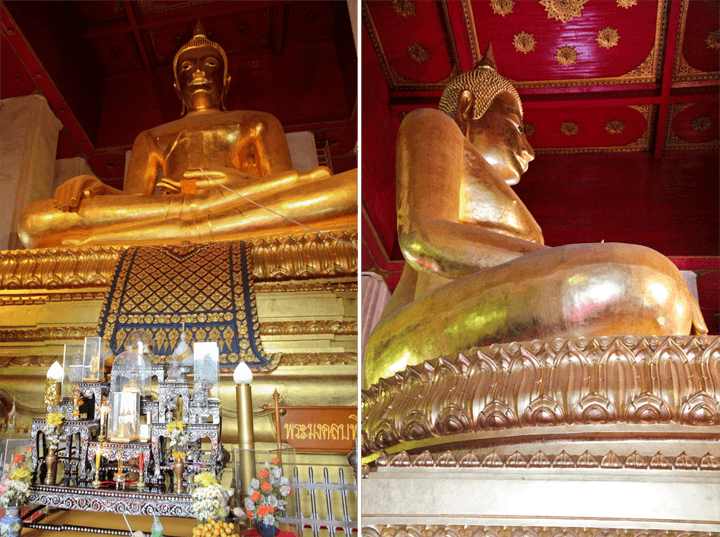 The nice thing about riding a bike as opposed to going on a tour was that whenever I pleased I could stop at smaller, less visited temples like Wat Worachetha Ram (free admission). There wasn’t much to see but the trio of oranges in the photo below caught me eye while I was riding by and I had to stop. 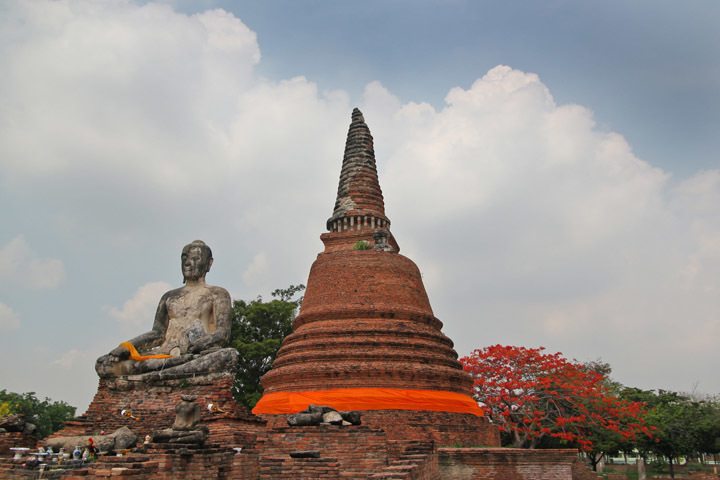 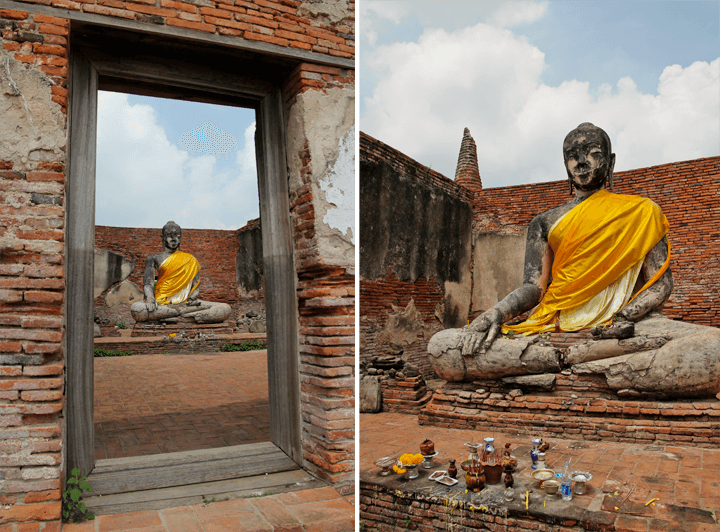 The final ruin that I visited on my bike tour was Wat Lokayasutha. This reclining Buddha was so beautifully aged and colored, and still clearly revered today. Many visitors were praying and leaving offerings to the Buddha while I was there. 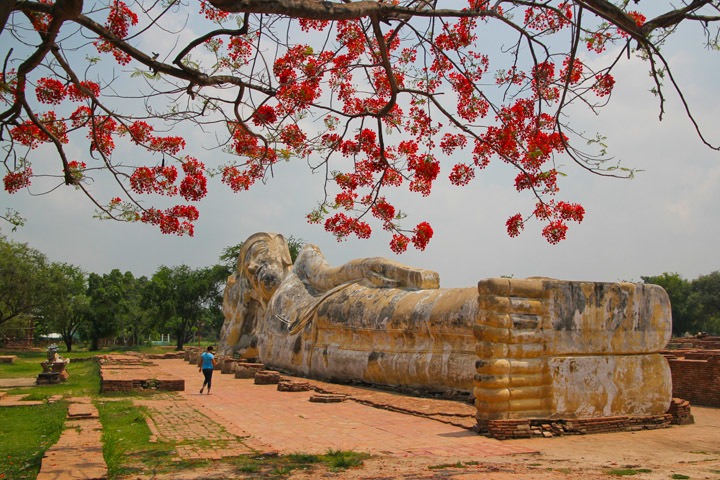 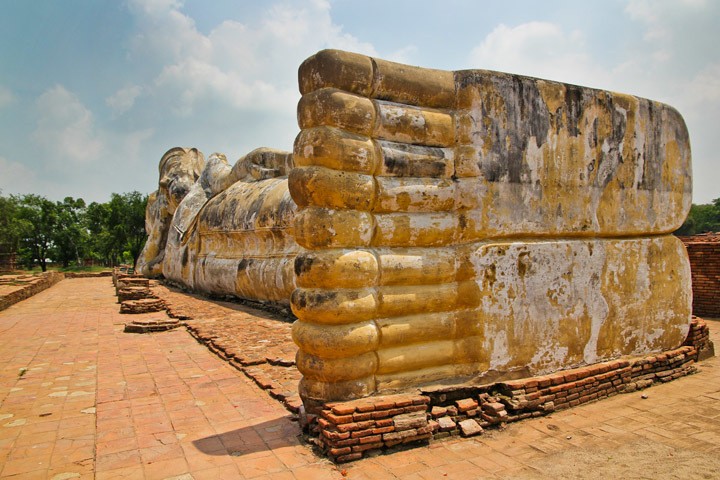 Of course on of the fun things about traveling on a bike is all the quirky little things you get to observe and take in, such as elephants parading through the streets. 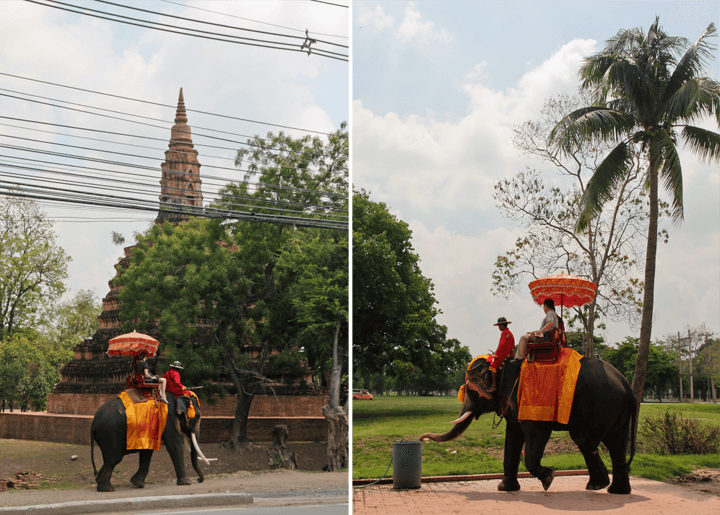 While it was quite the sight to see the elephants sharing the roads with bicycles, motorcycles and tour buses, it hurt my heart a little to see these babies all chained up. I believe the bright body paint is left over from Songkran, in which elephants are regally decorated. 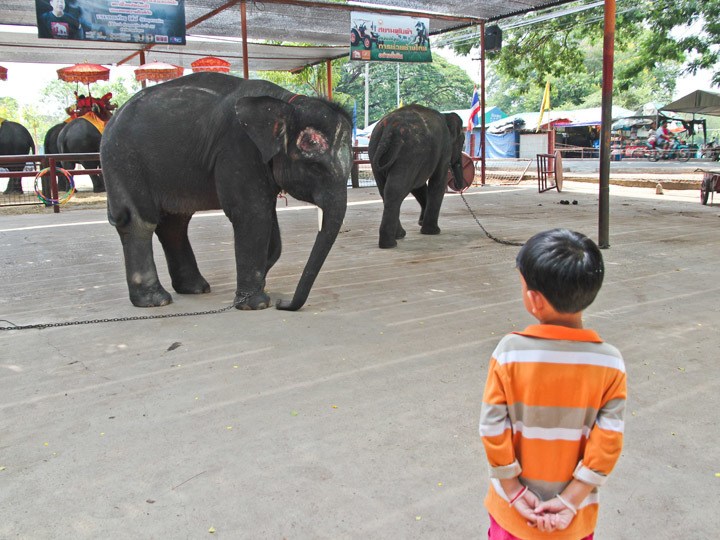 I also spotted this adorable little truck- locals know what their town is famous for. 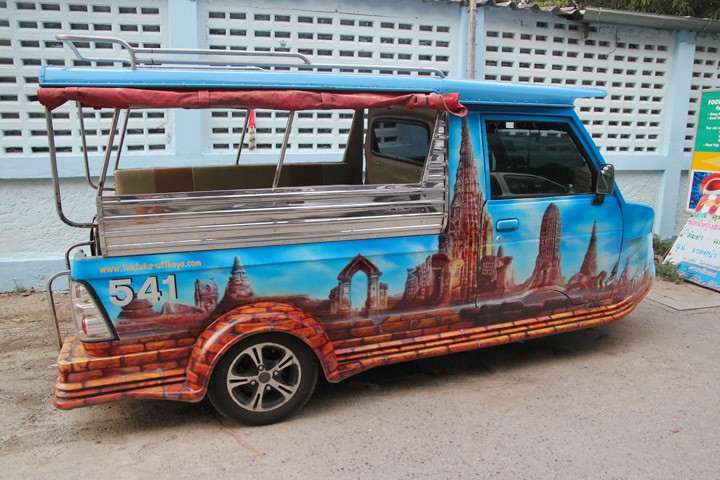 And finally, the statues. These statues can be found all over Thailand, often next to shrines. I know they are symbolic and spiritual symbols but I admit I don’t know anything beyond that. I’ve noticed Bangkok has a lot of zebras, while Ayutthaya seemed to be all about the chickens.

There were many other temples I could have visited but the midday sun was becoming a little to much for me. I wasn’t really eating or sleeping well at this point and I started to feel a bit faint on the bike! I was surprised to be done so soon but I had knocked off all the highlights that the woman renting me the bike had circled on my map, so I didn’t feel too bad. And as it was still early I decided that after a few hours of air-conditioning I would join a sunset boat tour to see highlights of the off-island temples. Stay tuned!

I had so much fun taking pictures in Ayutthaya! Which photo is your favorite?

Two Tanks Are Better Than One: My Review of the PADI Sidemount Course

A Rainforest Expedition: What We Did

Photo of the Week 53 Travel Quotes: Walk on Water
57 Comments...