Songkran, also known as Thai New Year, is one of the highlights on the calendar of any Thai, expat or visitor to the country. Songkran traditionally falls on the hottest day of the year in Thailand, and is thus quite appropriately celebrated with a mass, country-wide water fight and street party. For years I had read effusive declarations of love for this uniquely celebrated holiday, and I eagerly awaited my own chance to take part. I specifically scheduled my visit home to make sure that I was back in Thailand in time for Songkan, which I made plans to celebrate in Chiang Mai, the city most famous for its wild, multi-day celebration. 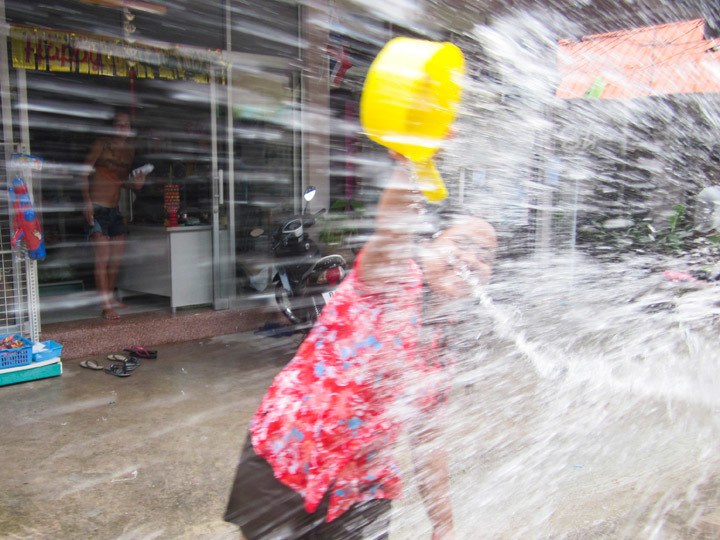 As my regular readers know, plans changed, and I ended up spending Songkran in Koh Tao. As I write this post (and many others) I’m really struggling with how to portray these events. I was in a really, really dark place and so my experience wasn’t the same sunshine and rainbows other people have had. And I want to be true to what happened and what I was feeling, but time has passed and inevitably I have begun to feel a bit lighter and don’t necessarily want to dwell on my misery… or maybe even to really admit to myself or anyone else how bad things were. I know I’m getting a little deep here for a post about a water fight, but as a writer this is something I’m struggling with. I know a lot of you are bloggers and writers, how do you handle situations like this? 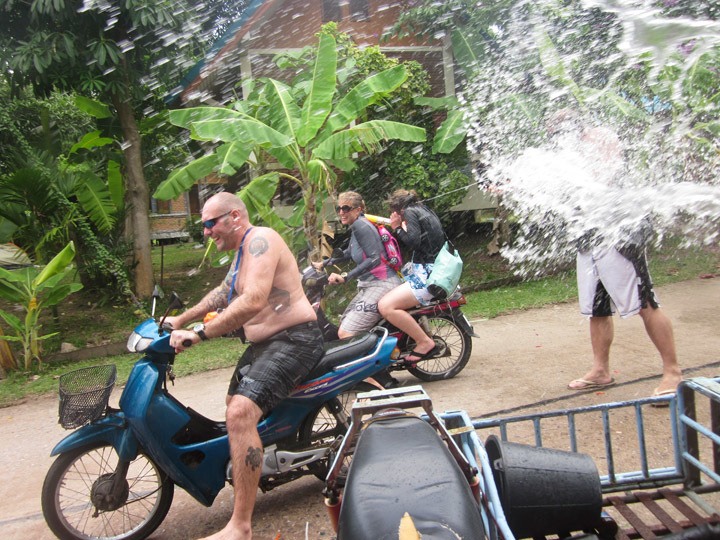 Anyway, my recent life changes were still very fresh and I had some pretty personal and painful associations with this particular day (forgive me for being vague) before it even started. I sulked around my hotel room a bit and considered going back to bed and trying life again the next day. Despite everything, I am so glad I got out of the house and got a little taste of Songkran. 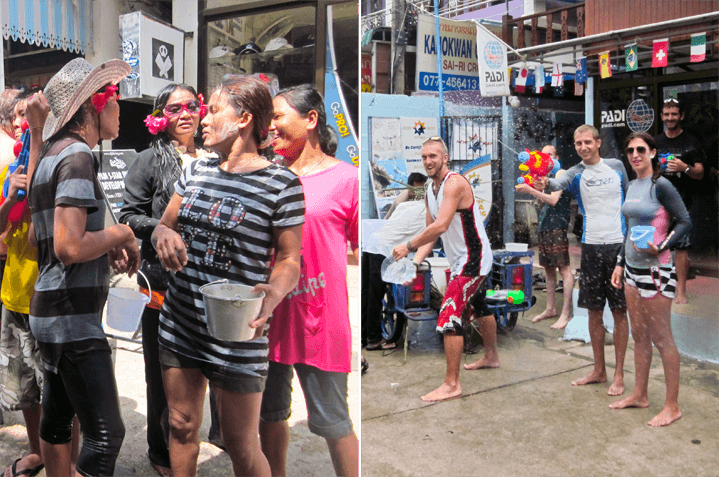 Traditionally, the “throwing of water” was a more tame and spiritual act. People captured water after it had been blessed and cleansed by being poured over Buddhas, and then used the water to pass on good fortune and wishes to others via a gentle pouring over the head. Historically it was a holiday celebrated among family, elders, and spiritual communities. However, as holidays around the world tend to do, Songkran slowly evolved and became a more public and rambunctious event. Today some traditionalists say it has even devolved as the emphasis has shifted almost completely from wats and buddhas to fun and the super-soakers, and some place blame on the fact that the festival can now be seen as catering more to foreigners than locals. Unfortunately things do occasionally get taken too far and the number of traffic accidents has spiked due to a combination of alcohol related accidents and water being thrown in the faces of traveling motorcyclists. 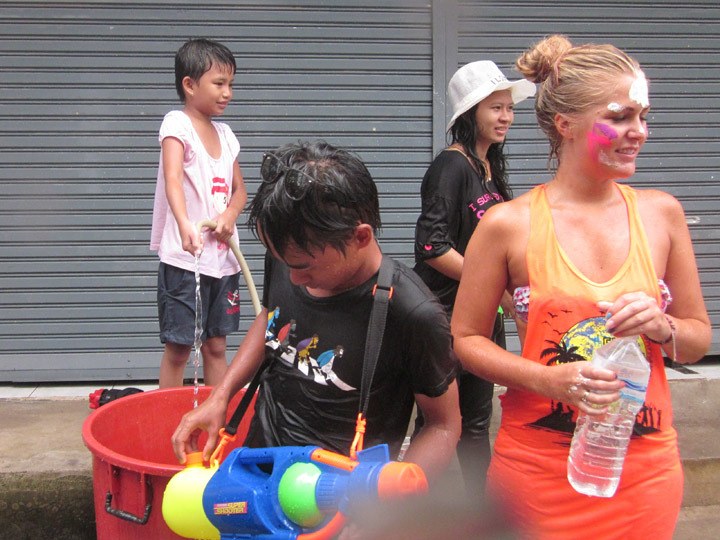 Despite all of that, I truly observed nothing but friendship, shared excitement and good will between the many groups of people on Koh Tao that day. While I certainly can understand how some might be disappointment by the loss of the spiritual aspect of the holiday, it seems Thai people have embraced the modern incarnation of Songkran with open arms and full water guns. 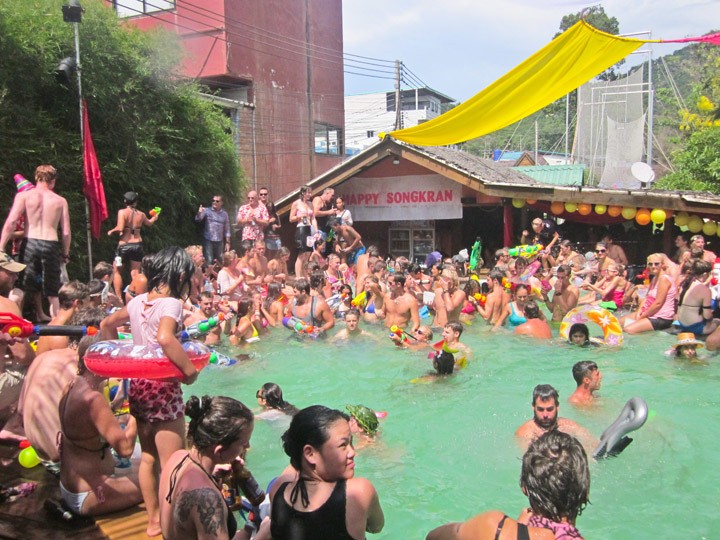 While Chiang Mai and Bangkok are the two most buzzed-about locales for Songkran festivals, it is literally celebrated everywhere. 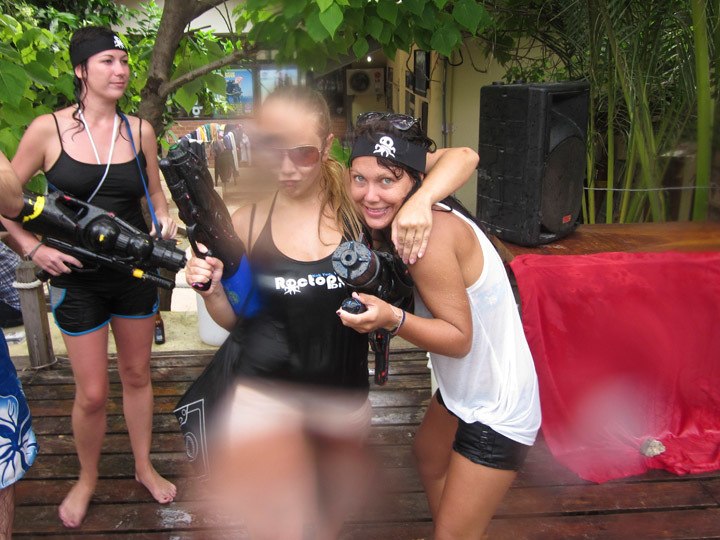 In Koh Tao the day started early as people loaded into trucks and salengs and roamed around looking for dry victims. Others lined the streets and balconies waiting the douse those driving by. No one was safe! 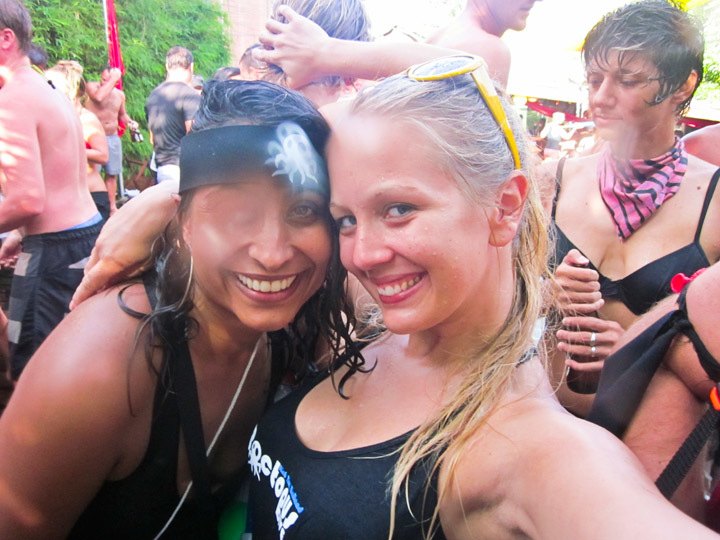 By midday, my friends and I (and from what I could tell, much of the island) had set up camp at DJL bar and pool. There was a lively DJ, cheap drinks and a pool perfect for refilling super-soakers and for pushing people into. 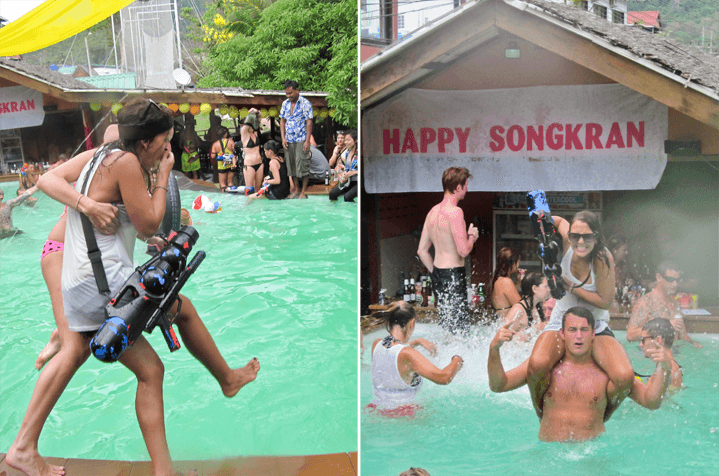 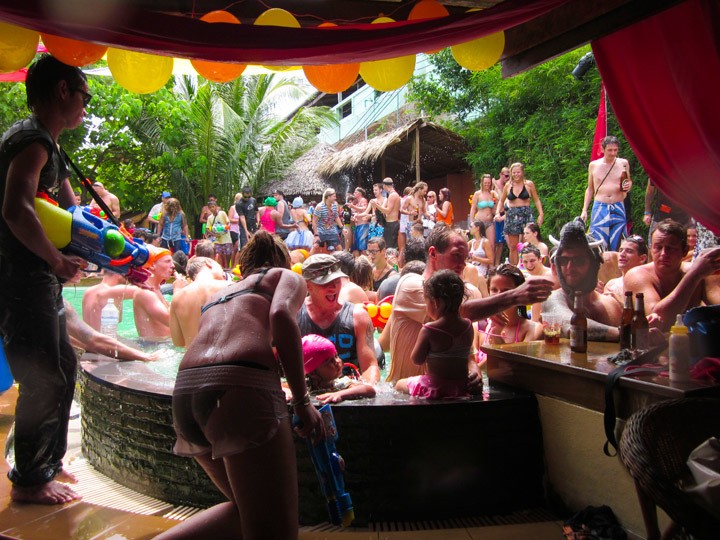 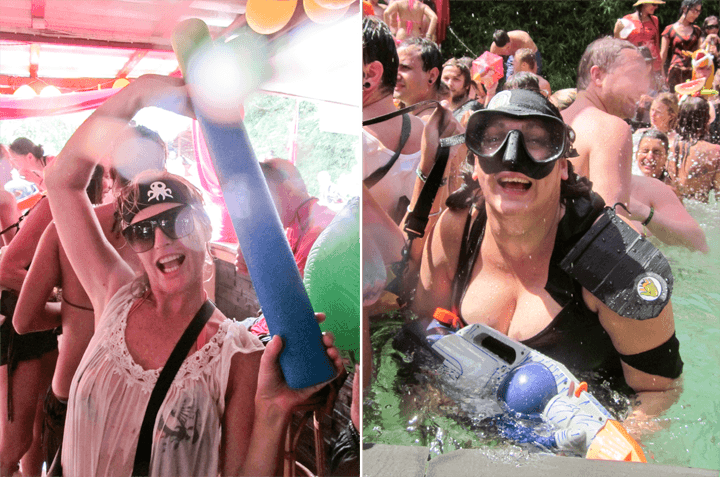 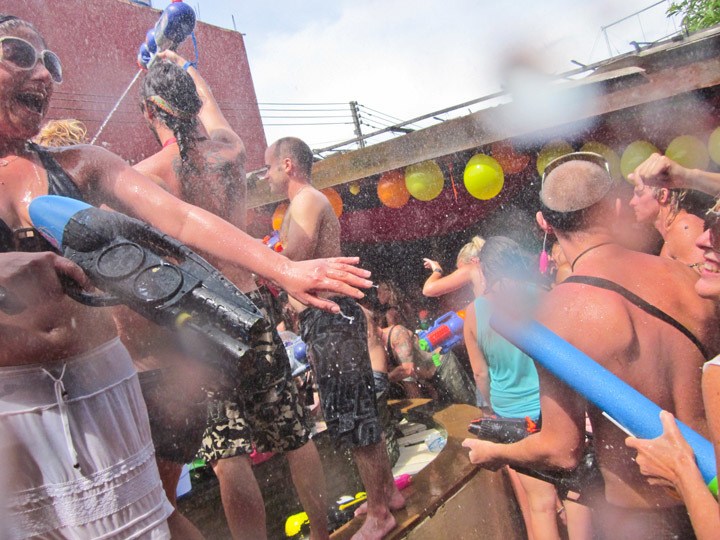 When I ventured into 7-11 for a little reprieve and for some sustenance, I laughed at their water-proofing of precious electronics. Clearly they had been to this party before! Unfortunately not all devices made it through the day unscathed. I personally know at least five Nokia phones that didn’t survive (mine was safe and sound in my room!) 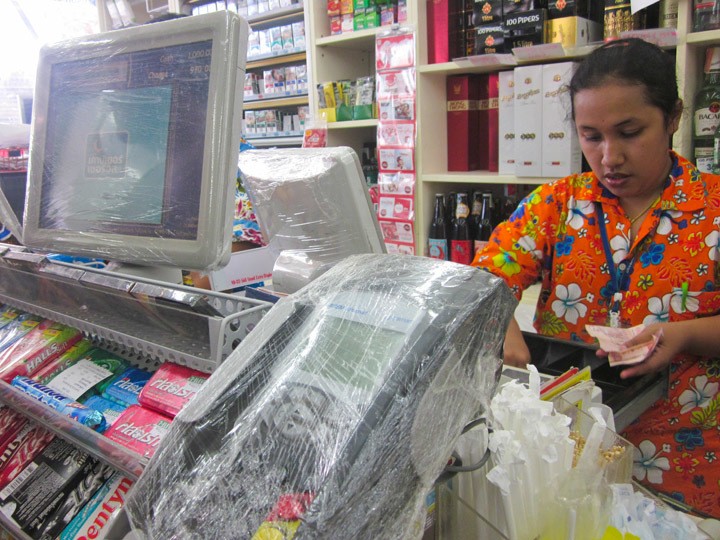 Back at DJL, bestie Kat and I found an exciting new diversion- getting one of our friends to trawl the bottom of the pool for the money, sunglasses and other hidden treasures that had fallen out of people’s pockets when they jumped/were pushed into the pool. 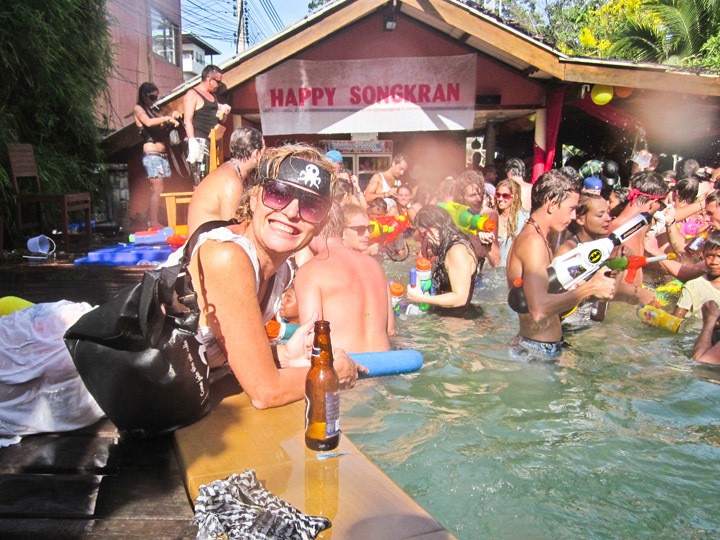 We ended up with seven pairs of sunnies- and I don’t really want to imagine what else was in that pool water! 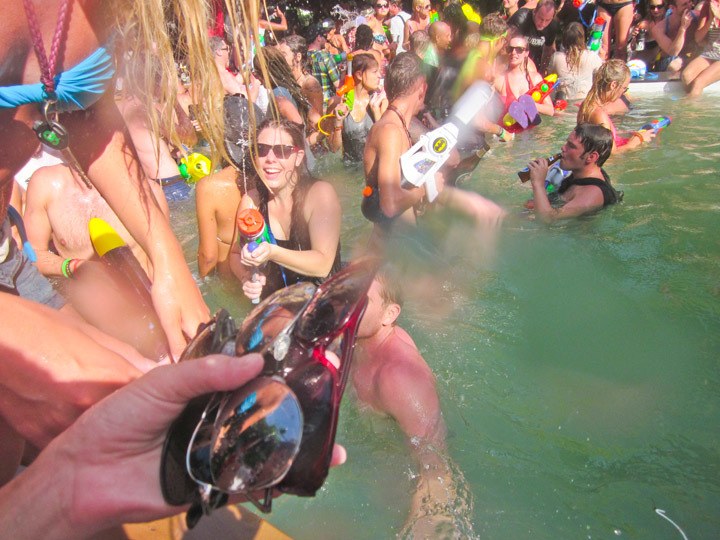 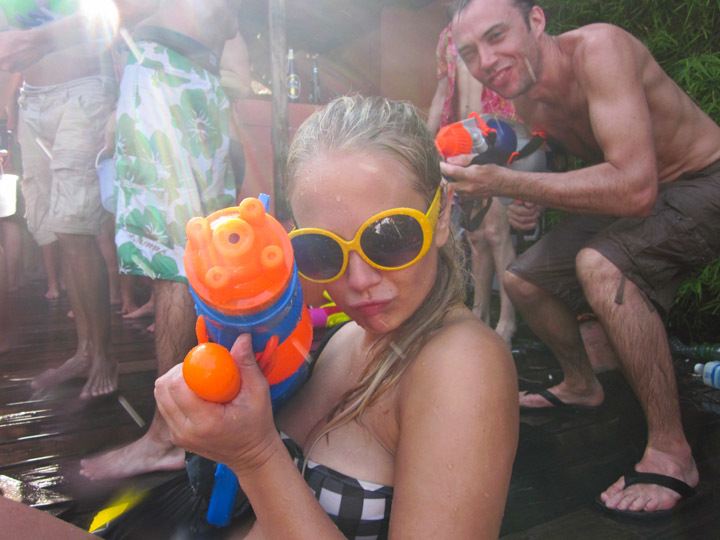 Dancing, sunshine, and silliness- It was one of the best parties I’ve ever been to. 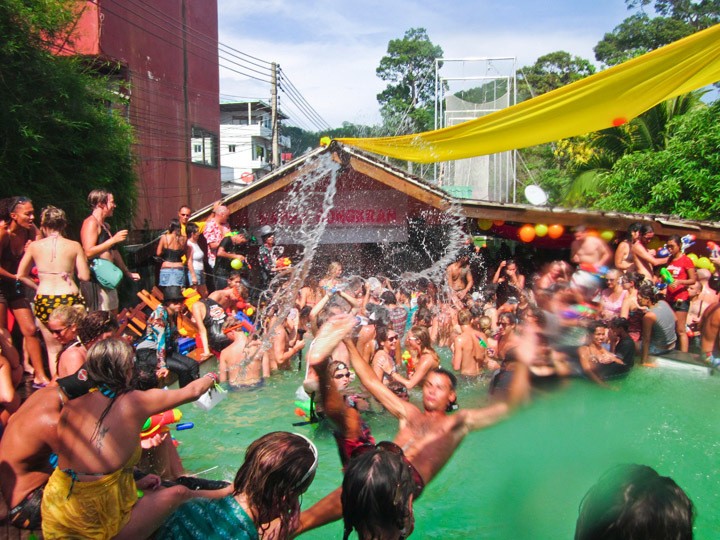 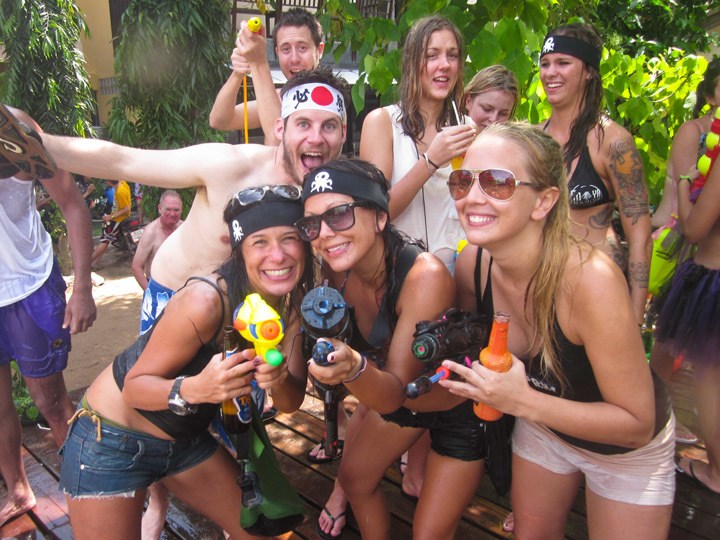 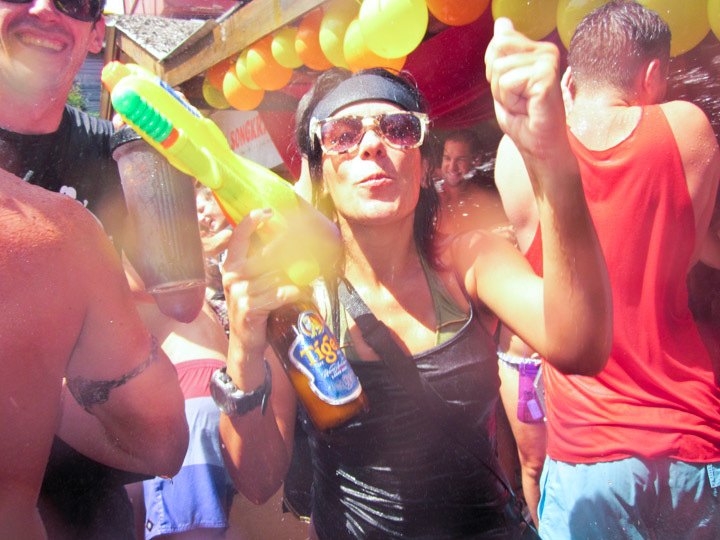 Eventually we decided it was time to move on to the beach bars, so we piled into the saleng. 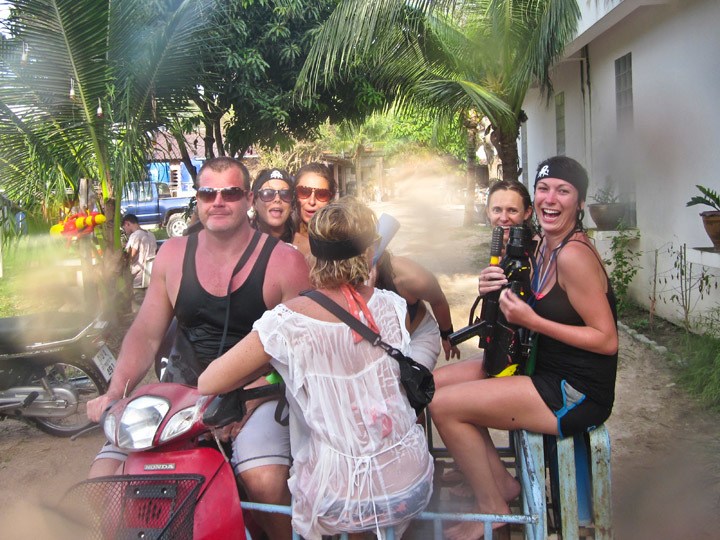 And piled, and piled, and piled until I couldn’t tell whose arm belonged to who or which leg was actually mine. Looking back, this was one of my favorite memories of the whole day. None of us could stop laughing, and neither could the disbelieving people we passed on the road! 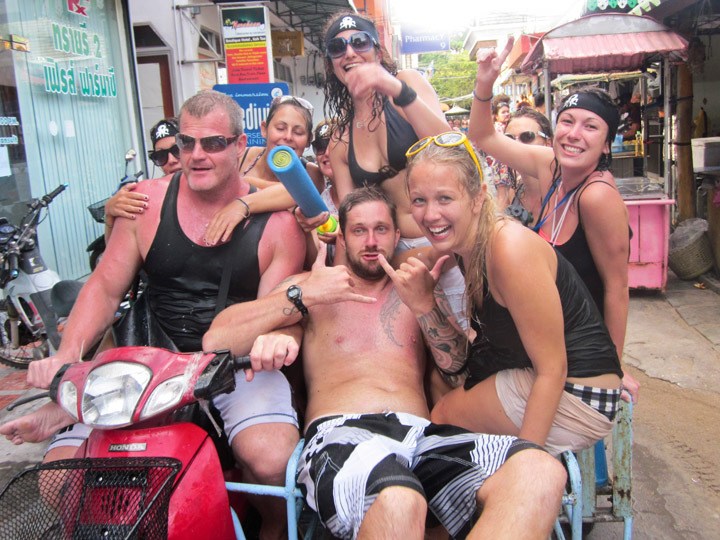 yes, there may have been some alcohol involved

Of course, eventually somebody was going to get hurt. At least the injuries were superficial when half our group bounced into the road after a particularly brutal speedbump. 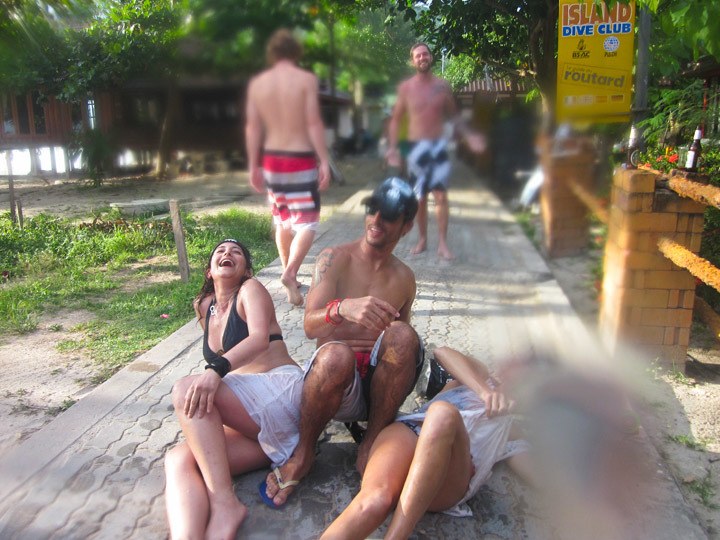 Down at the beach, the next phase of the party began. We danced and laughed and watched one of the most beautiful sunsets Koh Tao has ever been graced with. 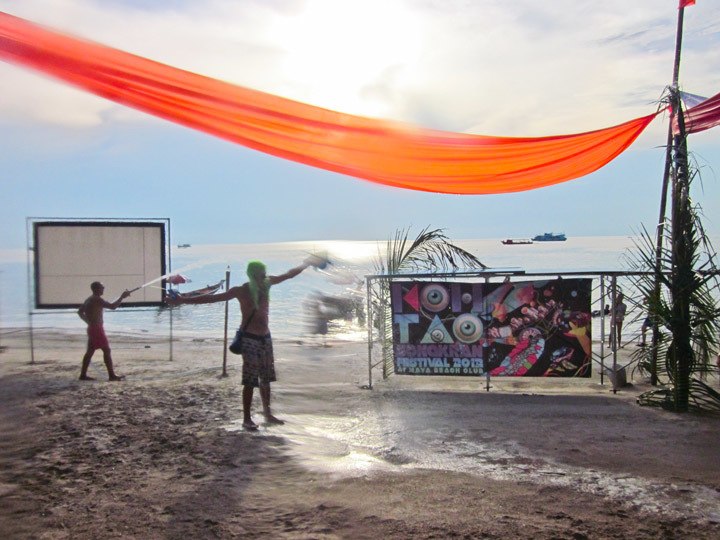 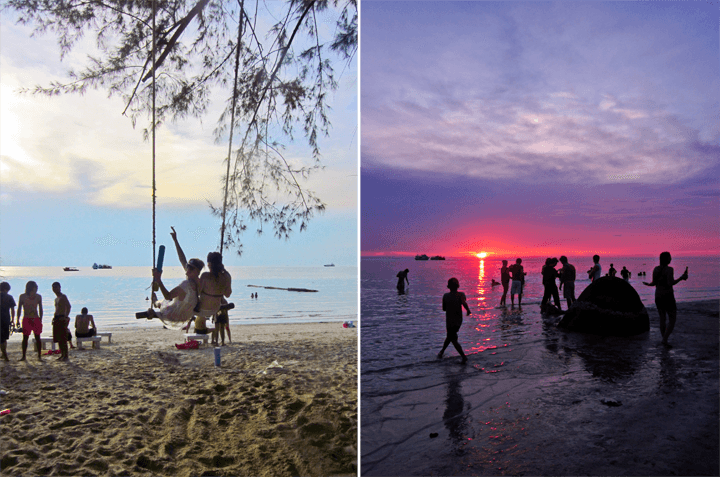 Koh Tao may not be an “it destination” for celebrating Songkran but I was able to enjoy it on an island I had come to call home, surrounded by friends who had become like family over the year. While I wasn’t in the best of spirits I would have had to be brain-dead not to see why people love this day so much. I’m also a little bit proud of myself… it would have been easy to shut off and say oh well, someone else ruined this day for me forever but I forced myself to go out and give it my best. In the future I look forward to celebrating with a clearer mind and checking out the festival in Bangkok! But you know what they say… you never forget your first Songkran. 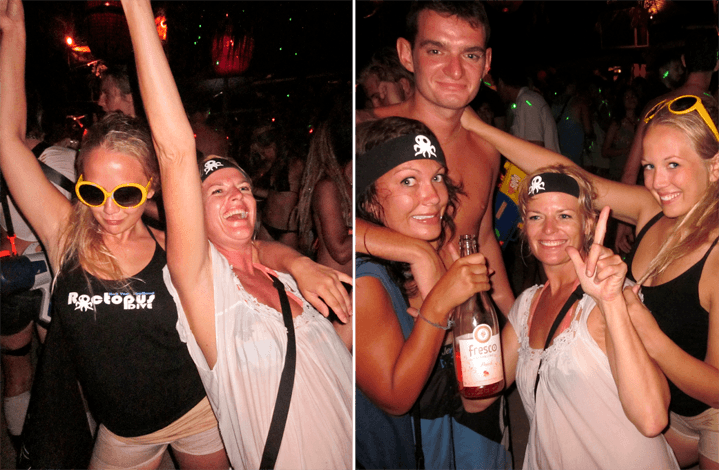 I even put together a 45 second video clip to give you a little taste of action.

Partying Around the Planet: The Best Nightlife Trips To Take In Your Twenties