A few years ago I attended Sunjam in Utila, Honduras — an intimate rave on a deserted Central American island. In light of the serious dearth of information available ahead of time, I wrote a Surviving Sunjam survival guide. While the Full Moon Party in Thailand is much more heavily documented, my recent return to Southeast Asia’s most infamous lunar blowout inspired me to revive the series. 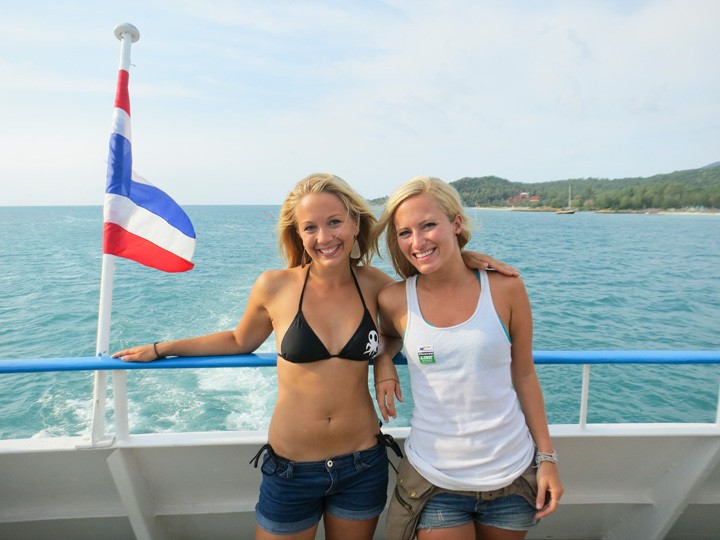 Calm before the storm… 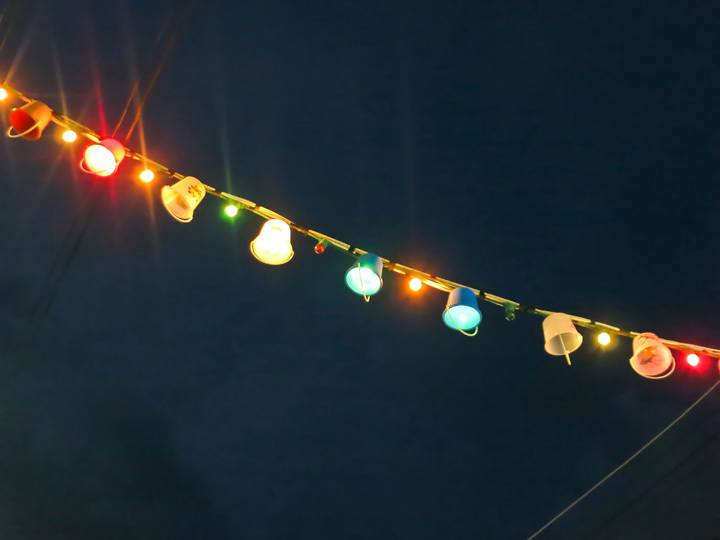 What: Oh, Full Moon Party. This monthly rave makes other wild parties around the world weep with envy. Picture a white sand beach, an endless row of palm trees, and a calm cove of blue green water. Then take several thousand neon-clad partiers from around the world washing down MDMA with alcohol out of plastic pails while techno beats compete for attention; blend thoroughly. For many, it’s a non-negotiable stop on the Southeast Asia party circuit.

There is a fair amount of controversy surrounding the Full Moon Party these days, both from original devotees who claim the celebration has become far too commercialized since its origins in the late 1980’s, and from those who think it’s a shameless example of tourists behaving badly. While I can empathize with those opinions, I’ve had a pretty rocking good time dancing till sunrise at every moon party I’ve attended. 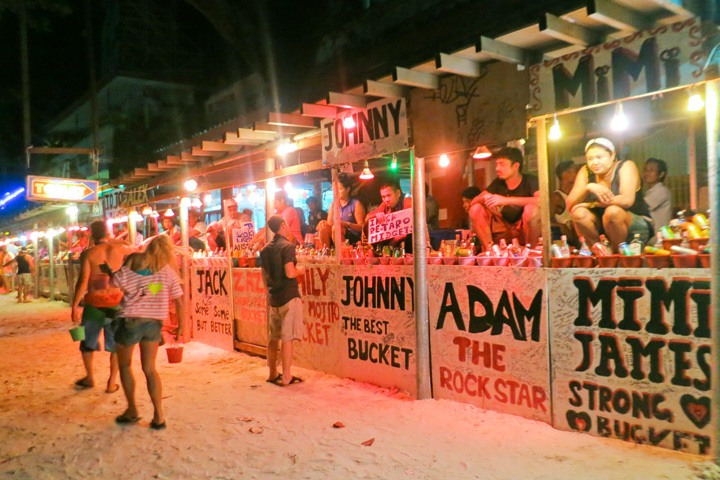 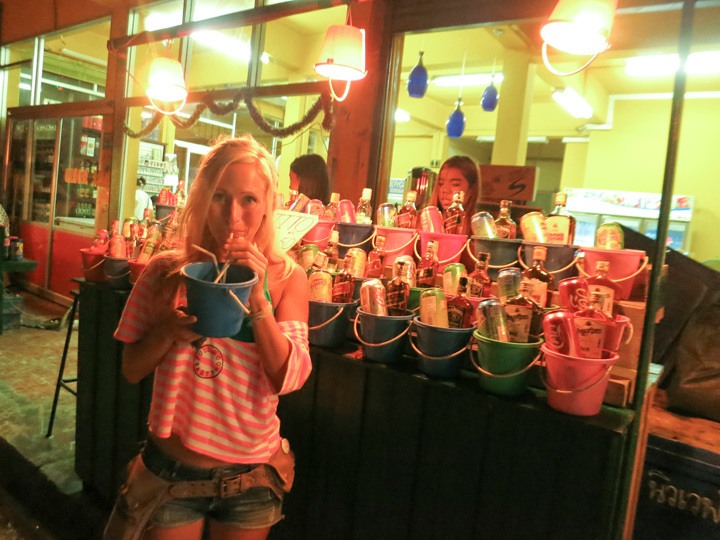 Who: Estimates for Full Moon Party attendance range from 20,000 – 40,000 backpackers, bucket guzzlers, and connoisseurs of neon body paint. While the crowd is mostly made up of young travelers, I’ve also spotted families and those old enough to be my grandparents — so don’t worry about being out of place!

Where: Sunrise Beach of Haad Rin, on the idyllic island of Koh Phangan, Thailand

When: There is a Full Moon Party every month on the night of the full moon, unless it is moved one day in either direction as to not overlap with Buddhist holidays. There are also bonus parties on Christmas and New Year’s Eve. Pre-parties in the days before are lauded by some as better than the actual event. A list of official dates can be found here. 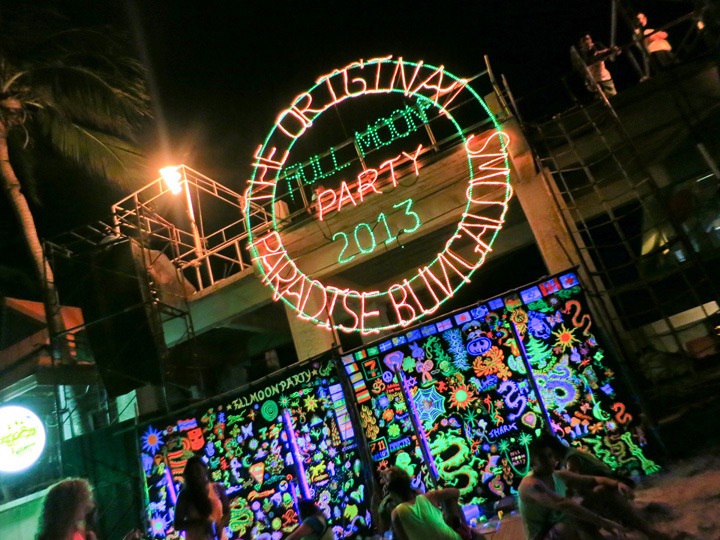 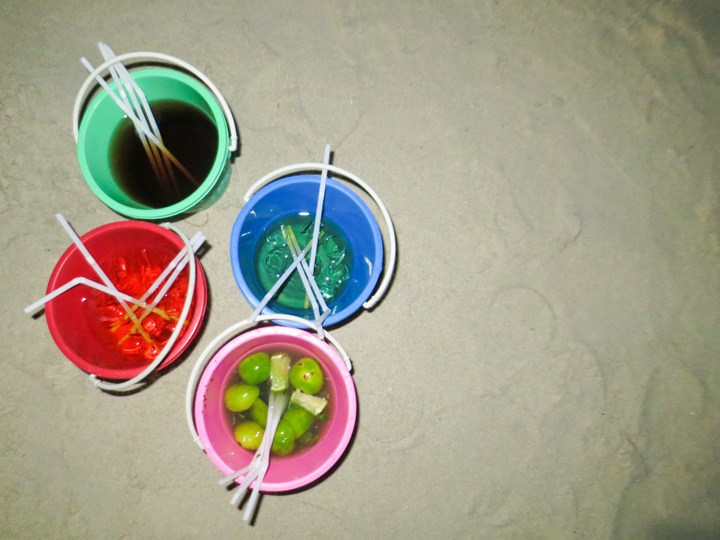 Cost: The Full Moon Party is expensive to do right! I spent 830 Baht ($27) to get to and from the Koh Phangan (I stayed on Koh Tao, more info below) and 2,000 Baht ($65) once I was there on alcohol, food, an outfit, bathroom admission, etc. Buckets of alcohol will cost anywhere from 180 baht off the beach to 300 baht for fancier cocktail mixes on the beach. Make sure to bring small change as all bathrooms charge 5-10 baht.

Getting There: Getting to Koh Phangan involves taking a ferry from either the neighboring islands of Koh Samui or Koh Tao or from the mainland ports of Chumphon or Surat Thani. There is no airport on the island.

Getting to the party once you’re in Koh Phangan is a mission in itself. The road into Haad Rin is windy and steep and boat taxis are often dangerously overcrowded, which is reason enough to stay in Haad Rin or nearby Ban Tai. For those looking for some peace and quiet, other areas of the island are completely unaffected by Full Moon madness and can offer a welcome respite after the party. However, accommodation fills up quickly before the party and you should arrive several days in advance to avoid paying an inflated price online or being shut out entirely. Personally, I usually take the afternoon boat over from Koh Tao and take the boat back in the morning, which saves me from the whole “where to sleep” dilemma. Answer: the sand. 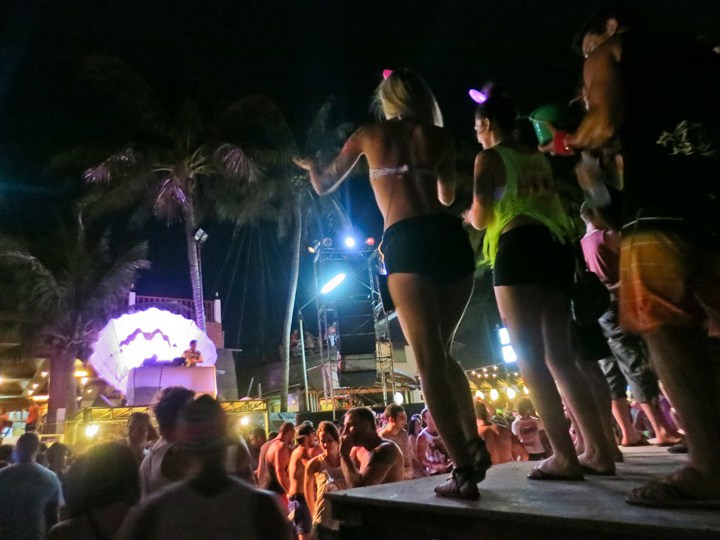 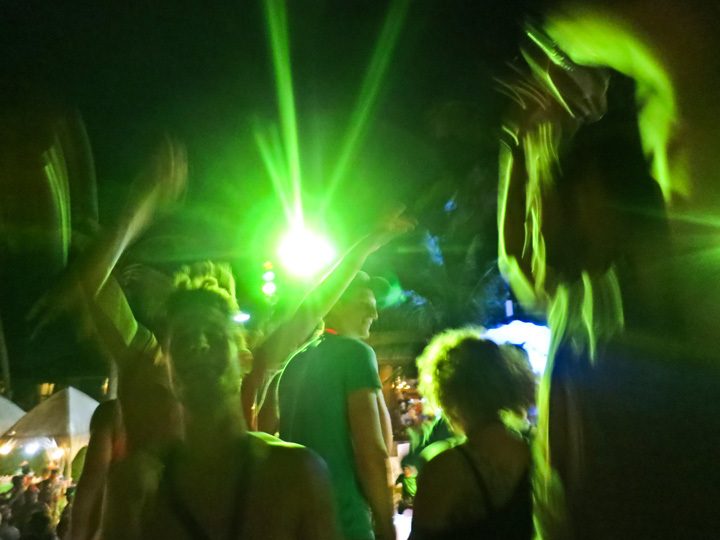 Staying Alive: The Full Moon party is pretty full on, and there are as many ways to ruin your trip as there are to have a crazy good time.

Drugs are a big party of the Full Moon Party experience for many, but they carry obvious risks. Rumor has it that the psych ward in the closest mainland hospital prepared extra beds around the full moon to accommodate for the number of travelers who lose it while experimenting with psychotropic drugs. And even the best trip can be ruined by undercover police giving you a choice between Thai prison or budget-devastating bribes. Trip with caution.

While I loved dipping in the water between sets at Sunjam, I wouldn’t dream of doing the same at the Full Moon Party. With so many people in such a small bay the once-idyllic waters are quickly transformed into a cesspool of urine, discarded beer bottles and zombie-like partiers gone too far. Speaking of discarded beer bottles, keep those flip flops firmly on your feet — it’s a glass shard beach come morning.

Be careful with entertainment in the form of fire jump ropes and hard waterslides. I’m not going to tell you not to do them, because after a few buckets I am straight down that slide with the best of them. I am happy just to watch the professional fire dancers though — I’ve seen too many horrific burns resulting from the fire jump roping to entertain that idea.

If you chose to stay on Koh Phangan, take care of your things. Everyone on the island is aware that every tourist is heading to the party, and that makes it a great night for petty burglary! Consider buying a Pacsafe

to store valuables. Don’t bring anything out with you that you can’t afford to lose. 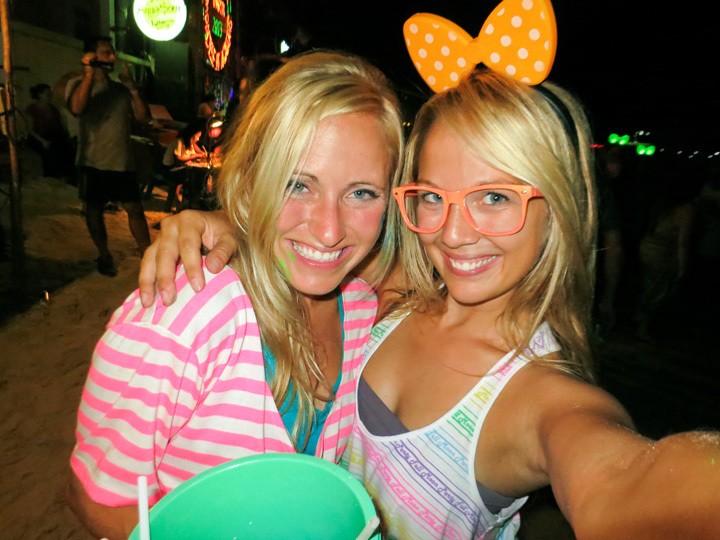 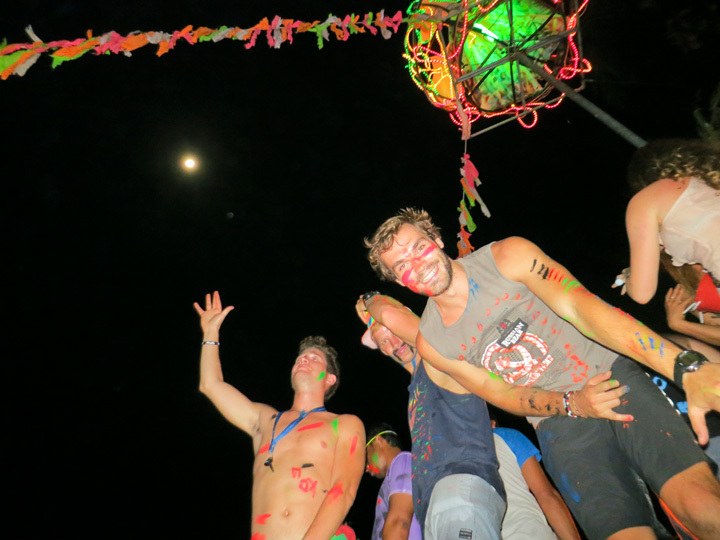 Every moon party I’ve been to I see some poor sorry fools walking around with laminated “VIP” badges that they surely purchased for a small fortune somewhere on Khao San Road back in Bangkok. While there is technically a rarely enforced 100 baht ($3) entry fee to the party, there is absolutely no need for a pass of any kind, especially one that you wear on a lanyard around your neck.

Every party I see people passed out on the sand like logs before the clock strikes midnight. Not only do they become a tripping hazard for everyone around them, they miss the whole party! Make sure to intersperse your buckets with water and eat a good dinner ahead of time.

3.     Consider Staying on Another Island

This was always a no-brainer for me, as I was living on Koh Tao for all but this most recent party I attended. While you’ll have to book a ferry to and from the party, you’ll save on inflated accommodation and won’t have to arrive days ahead of time to find it. Also, I always find returning to the relative peace and quiet of my bed in Koh Tao to be such a relief after all the madness.

Oh come on, it’s all part of the fun. When else can you have an excuse to go head-to-toe neon? I’ve always enjoyed the pre-party ritual of combing the shops of Haad Rin for the perfect party shirt and accessories. Also, though I strongly resisted at first, I’ve accepted that the blinking bunny ears (I’m wearing them two photos up) are the best way to keep a big group together. When moving locations, switch on the ears and lead your crew through the human traffic jam!

Make sure you either have a ferry booked off the island or a place to lay your head. Make a plan to meet up with group members you may be separated from. And considering stopping by one of the infamous after-parties before turning in! But most importantly, don’t plan to do much of anything the day after (or even two days after) the party, other than maybe get a massage.

You’re only young once (or forever, if you’re Jay Z), so party like you mean it! Bond with new friends over buckets, dance on speakers, watch the sun rise from Mushroom Mountain, paint your face neon orange, sing till you lose your voice, and fall asleep in the sand. Squeeze as much euphoria as possible out of every moment. 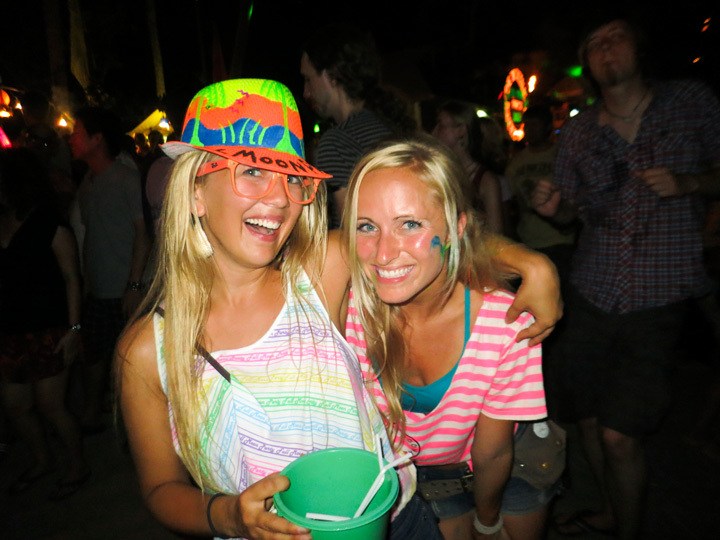 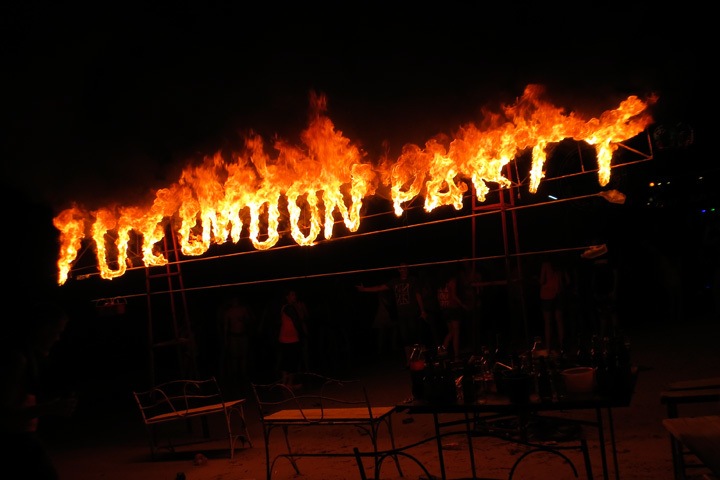 Have you been to the Full Moon Party? Would you go?