I’m breaking my normally chronological posting in honor of next weekend’s big event in Utila, Honduras. Last year I attended Sunjam Utila with four of my favorite people, ever, and it’s one of my favorite travel memories, ever. This post is long but its all information that I searched long and hard for before attending and mostly came up short, so I hope this becomes a resource for future sunjammers. I plan to attend more wild parties like this around the world, and maybe start a Survival Series!

What: Ah, Sunjam. A teeny tiny blip of sand and palm trees in the middle of the Caribbean Sea; normally deserted, but for 24 wild hours each year, heaving with techno dancing backpackers from far and wide.

There is something thrilling about knowing you are so far from civilization, about meeting people from all over the world in one small stretch of sand, about being able to dip into the warm ocean water in between sets, and about watching the sun come up having never fallen asleep.

Sunjam began 13 years ago when a group of travelers and friends wanted to have a special party in beautiful surroundings, similar to the origins of Thailand’s infamous Full Moon Party. It has gone on to attract famous DJs and make a serious mark on the international party circuit. 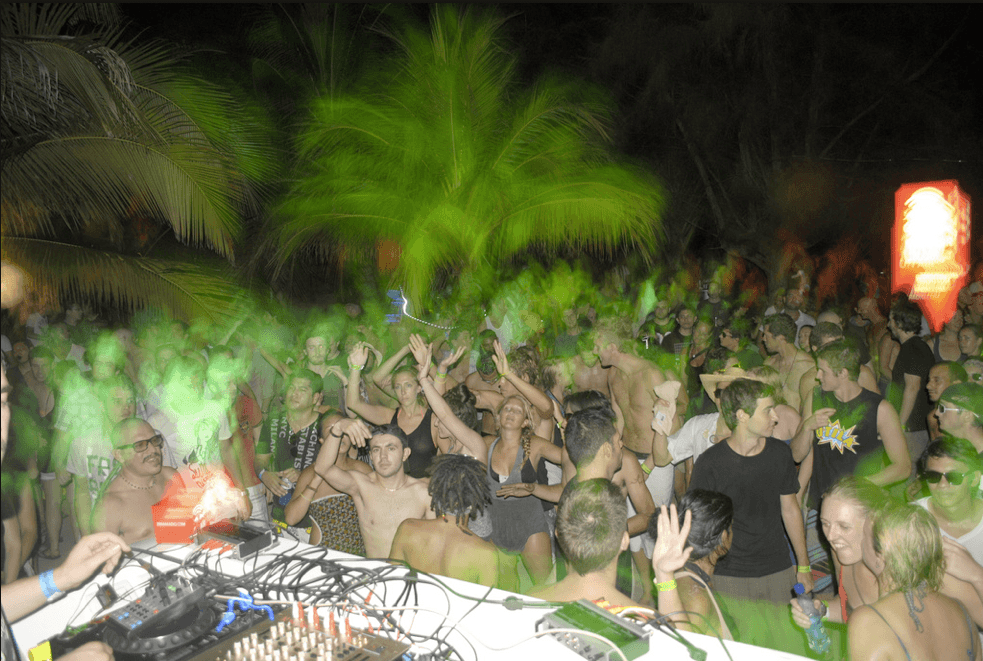 Can you spot me in these official photos?

Who: Up to 2,000 backpackers, Hondurans, and techno lovers in attendance as well as an impressive line up of DJs. (Well, impressive to um, people who know stuff about music. Which is not me.)

Where: Water Cay, a three acre uninhabited private cay off the small island of Utila in Honduras.

When: Every year Sunjam takes place on the first weekend of August. This year’s event is August 6th. It is a full 24 hour festival starting at noon on Saturday and spilling into Sunday and for the true party animals, all the way until Sunday night back on Utila.

Cost: Ticket prices vary according to how early your order them. We preordered and spend $41.50 on each ticket. Preorder sales are over for 2011 and the full price ticket is $55USD.

In total, I spent $86USD on Sunjam, including ticket, food, drink, and transport to Water Cay. Extremely pricey for a night out in Central America, barely a blip compared to a festival in the UK or a night out in Ibiza. 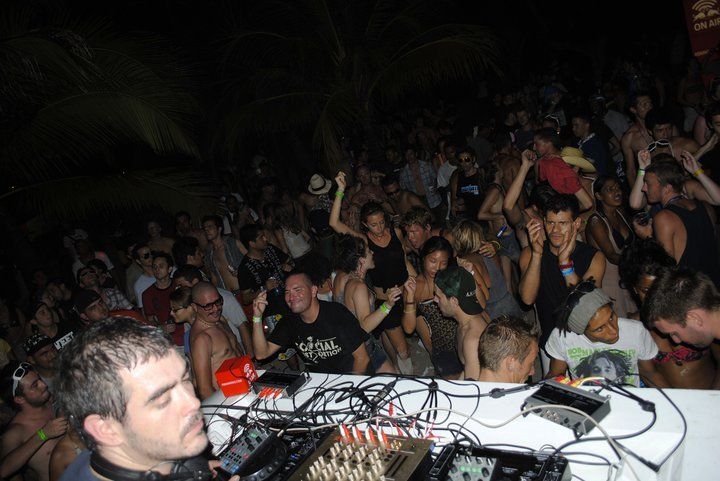 Getting There: Getting to Utila involves taking a ferry from La Ceiba or a catamaran from neighboring island Roatan. There is an airport in Utila but I didn’t meet one person who flew in due to the backpacker crowd that flocks to the island.

Water Cay is also accessible only by boat. There are large, pricier “party boats” that head to Sunjam, but every local on the island who has a boat will be offering rides and so you can always catch a cheaper ride with one of the many local fisherman.

Staying Alive: Sunjam is at it’s essence a rave and drugs are readily available. If you partake, remember that you are on a deserted isle off of a small island off of what many consider a third world country, so if things go south health care is a long way away. In one sobering moment of the night I watched a girl go into a seizure and be whisked away onto a boat. Everyone around her acted quickly and miraculously knew exactly what to do, but I can’t image where she ended up.

For some people, the most terrifying part of Sunjam will be calling it quits and trying to get back to Utila. The majority of people leave soon after the sunrise, and the boatmen waiting by the exit screaming and pushing you into boats are a quite unnerving after a night of no sleep. The boats are then overcrowded and go extremely fast in order to get back more quickly to pick up more paying customers. If you are a nervous boater or not a strong swimmer, negotiate with someone and try to pay them a bit more to go on your terms (slower and with less people).

This is more in regards to your stuff staying safe than you, but be aware that when you leave for Water Cay, leaving all your stuff behind unguarded for a night, everyone on Utila knows that every tourist on the island is gone. Maybe it’s because Utila is the only island I’ve ever had my purse stolen on, (and heard numerous similar tales) but I highly recommend securing your stuff as much as possible when heading out for the night. I went a little wild and bought a Pacsafe

specifically for this night to store my camera, wallet and passport. 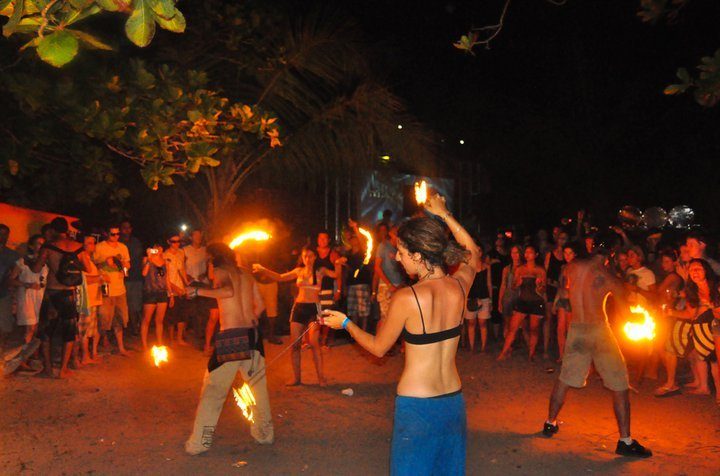 My main complaint with Sunjam? The mysterious no camera rule. I thought about trying to sneak one but didn’t want to be stuck on a Cay in the middle of nowhere being refused entry and either having to ditch my camera or turn back to Utila. In reality we were hardly searched and I saw many people snapping away inside. Curses! What I should have done was brought a disposable camera. If it’s confiscated, no big deal. If you get away with it, hilarious photos for all.

Is 55USD way out of your backpacker budget? The bartenders working at Sunjam were all “volunteers,” working a set shift in exchange for tips and entrance to the event. From what I gathered the Sunjam crew arrives in Utila about two weeks ahead of time to begin preparing for the event, so try to be on the island as early as possible to start sniffing around. Try asking at Dive Parrots Utila, which sells tickets leading up to the event. If you can’t get on the staff and can’t attend, you won’t have wasted your time because the events leading up to Sunjam are amazing themselves!

3.     Bargain with the bartenders

Once we knew the bartenders were itching to get on the dance floor and working only for tips, Mark starting using it to our advantage. Drinks are sold on a ticket system, where you buy tickets at one booth and then redeem certain numbers of them for certain drinks. For example, if a ticket was worth 3 USD and a red bull vodka was worth three tickets, Mark would offer the bartenders one ticket and a one dollar tip, saving $2 per drink. I don’t remember the exact prices, but I know that after twelve hours of drinking it does add up!

The island is very small and will be at full capacity for Sunjam. Accommodation books up early. If you are the nervous type or traveling in a large group like we were, consider booking ahead.

When we arrived on Water Cay we were surprised to see that some people had pitched tents along the outskirts of the rocky part of the coast. Those brilliant tent-carrying jerks.  When we were starting to collapse around sunrise and had to call it a day and get on a death-defying boat ride, they were able to roll into their tents, sleep a few winks, and get back up and continue the party. That’s what I call prepared.

When we finally emerged from our comas to find sustenance on Sunday evening, we were shocked by the number of zombie like backpackers waiting in line for the already seasickness inducing ferries. I can think of nothing worse. I implore you, stay in Utila until Monday! Your body will thank me, and you’ll get to watch the energizer bunny party people going into the wee hours Sunday night while you commiserate with fellow hangover sufferers.

On a normal night, you’re just as likely to find me watching Law & Order reruns as out dancing on tabletops. But I knew this was a once in while event, so I made myself enjoy every moment, from sipping Johnny Walker on a wealthy Honduran’s mini-yacht to sitting covered in sand and sweat and cheering for the approaching sun. If you can possibly get to Utila this week, do it. You won’t regret a minute. 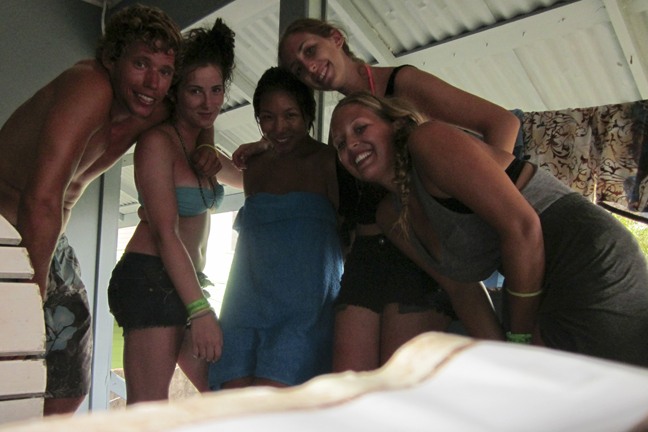 From Virgin Snorkelers to Diving in 3 Days Flat!