Traveling — stepping outside your own culture and comfort zone — tends to come with a side dish of ethical and moral decision-making. Maybe you’re concerned about the environmental impact of a Caribbean cruise, or you’re fretting over what to wear in a conservative country like Egypt. Maybe you’re wondering how to help poverty-striken children in Cambodia without doing more harm than good. As a perpetual traveler, I deal with these issues on a regular basis. Yet never have I felt my conscience tugged at as deeply as when I was traveling through Laos.

Perhaps this has to do with the fact that tourism is in its infancy in Laos — and so every tiny impact that foreign travelers make is still measurable. Perhaps it’s because this sparsely-populated, land-locked nation was such a complete mystery to me, and there was no prior knowledge to soften the blow of the misdeeds I saw here. Perhaps more than anything, this is a nation that still has a beautiful innocence to it, and my instinct was to protect that. 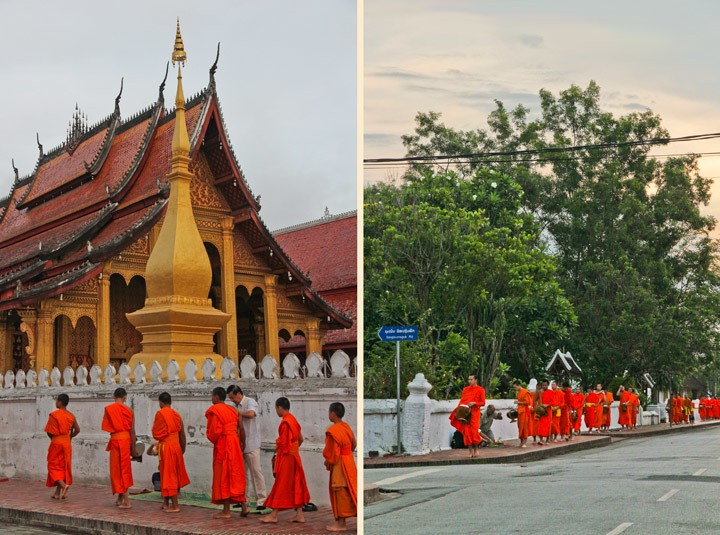 While the true effects of foreign influence and mass tourism on a country like Laos are incalculable, two situations stood out to me, and stayed with me long after I received my exit stamp from immigration. The first was watching the abhorrent behavior of tourists at the Tak Bat ceremony in Luang Prabang, Laos. 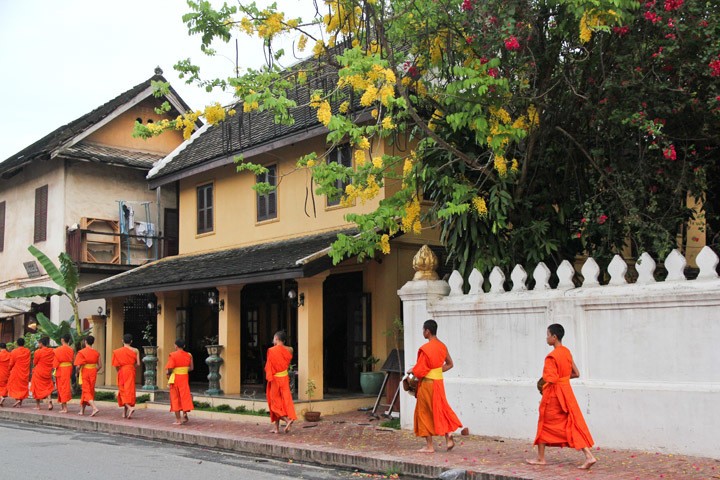 In my previous post about The Sights of Luang Prabang I touched briefly on this beautiful ceremony and its religious significance. This morning alms procession, known in Luang Prabang as Tak Bat, is a beautiful ritual that takes place at dawn all across Laos and greater Southeast Asia. As I wrote there:

Monks float through the quiet streets, collecting offerings of sticky rice from the devoted. It is a form of meditation for the monks who are living out their vows of poverty and humility; and an act of respect and gaining spiritual merit for the Buddhists who participate.

Sounds beautiful, right? Well, sadly, shots like the ones above and in my previous post are quite a challenge to capture. In reality, the scene looks a bit more like this: 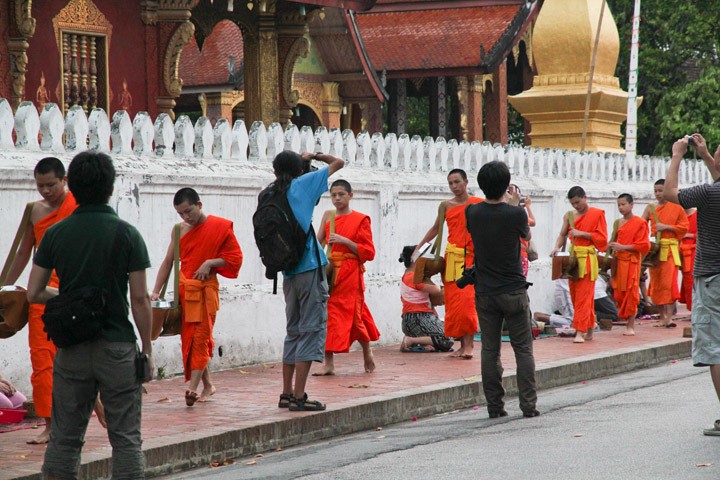 Yes, tourists behave badly at the Tak Bat ceremony in Luang Prabang. Despite pleas in guidebooks, in magazines and blogs, and on signs around town (how embarrassing for us that these are even necessary?) people continue to show an appalling lack of respect.

I rose before sunrise to watch the procession. I packed my telephoto zoom lens, covered my shoulders with a shawl, and made my way into town early so that I could stake out somewhere discreet. At first I delighted in walking through the quiet streets as the sun rose, but soon grew uncomfortable as more and more vendors approached me to purchase rice for the monks. While I can understand how it would be thrilling to participate in this ceremony — and I have a genuine interest in Buddhism — I am still not a practicing Buddhist and thus I believe it would cheapen the experience for me to take part. Not to mention, I had read countless signs around town urging tourists not to buy sticky rice off the streets to give to the monks — it is low quality and makes them ill.

I walked to Wat Sensoukaram, a spot I had staked out the day before, and settled in on the sidewalk across the street from where the monks would be proceeding. I quickly realized I wasn’t the only one with that location idea, as tour buses unloaded large groups into the middle of the road. The anticipation in the air was high when the first saffron blur appeared in the distance. I took a few discreet photos and then put the camera down and watched in horror as the scene in front of me unfolded. It was, to put it bluntly, a circus.

People flocked to the monks with cameras blazing, like a swarm of spiritual paparazzi. They conversed loudly. They jogged anxiously from one spot to another to get the best shot. They even went so far as to stand directly in front of the monks, forcing them to break their meditative stroll and walk around the intruding lens. Those participating handed iPhones to each other in order to capture their moments of “spiritual merit” for the world to see. I felt a little sick, a bit baffled, and majorly embarrassed. 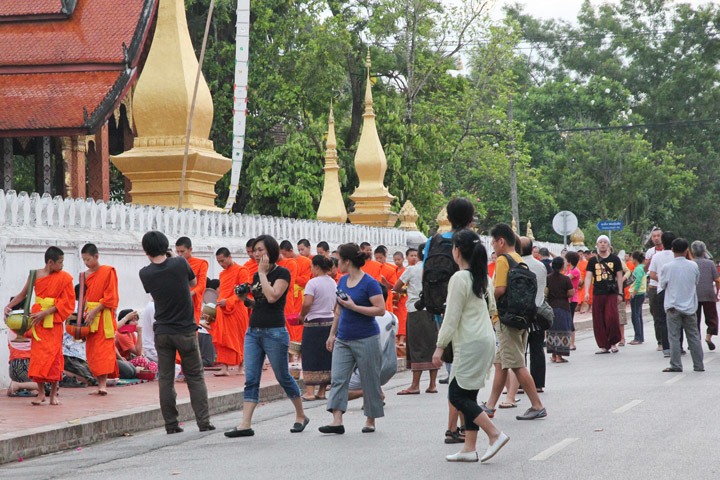 Watching this sacred ceremony is a privilege. Participating is about practicing a religion, and gaining spiritual merit — not taking Facebook profile photos or buying enlightenment for the price of a bag of sticky rice. And observers should be held to the same high code of behavior. As someone passionate about photography I understand better than anyone how tempting it is to do anything for that perfect shot. But the line has to be drawn somewhere. And if getting a great photo comes at the expense of disrespecting a culture and showing a lack of regard for others’ sacred practices — well, that’s not a photo I would want hanging on my wall.

So, is it possible to observe Tak Bat in a respectful way, without degrading a centuries-old tradition? I believe so, but be forewarned that other won’t and that as I’ve said before, you will likely walk away feeling more frustration than spiritual enlightenment. In my opinion, a good guideline is you should never step foot off of the sidewalk opposite the street from the monks, never use a flash and generally conduct yourself as you would in any religious setting. You can find more tips (and beautiful photos from those who followed them!) here.

I walked away from Luang Prabang with my head held high, knowing that I had conducted myself in a way that I could be proud of among a sea of people who didn’t. I arrived in Vang Vieng feeling preemptively guilty — I knew there was no way I was walking out of that town feeling morally superior. 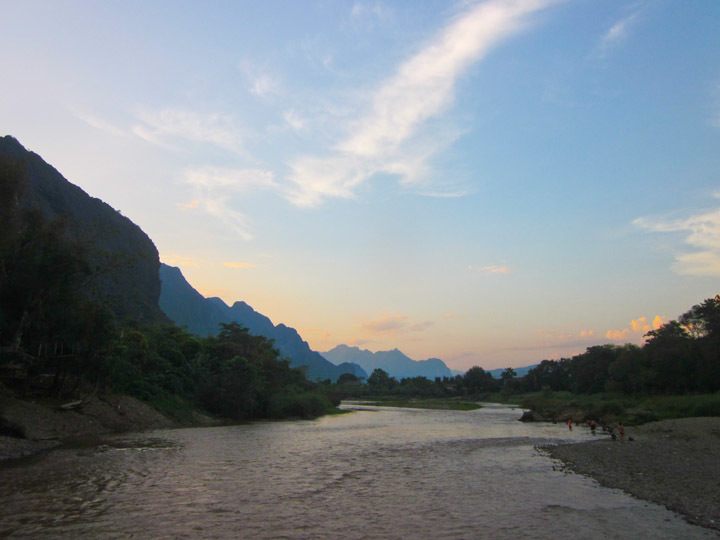 Tubing down the Nam Song River in Vang Vieng may just be one of the most controversial activities in all of Southeast Asia. This post gives a pretty clear picture of what goes down, down on the river. But in summary, it’s a moronathon of cheap buckets of whiskey, readily available drugs, loud DJ sets, half-naked people and inner tubes.

So. What happens when you create an all-day, every-day rave culture in a quiet, small town deep in the jungle of an already conservative country? Bad things. 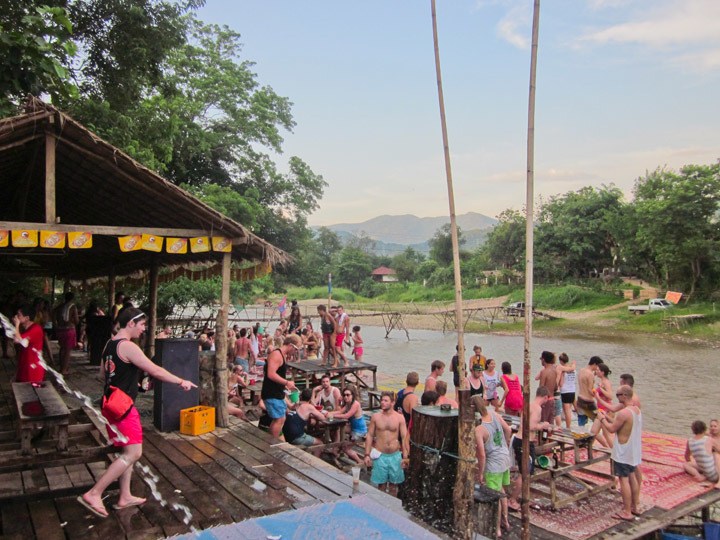 First of all, people die.

According to official reports, 27 foreigners died last year. A shocking number as-is, though the true death-tally may be much higher. Anyone who does not die on the spot is rushed to the nearest true hospital — four hours away via bumpy roads in the capital of Vientiane. In reality, it’s not a stretch to guess that nearly one backpacker per week dies in Vang Vieng. More here.

But, callous as it may sound, travelers are not the only ones suffering. The way tourism has developed in Vang Vieng has had a devastating effect on the local community. 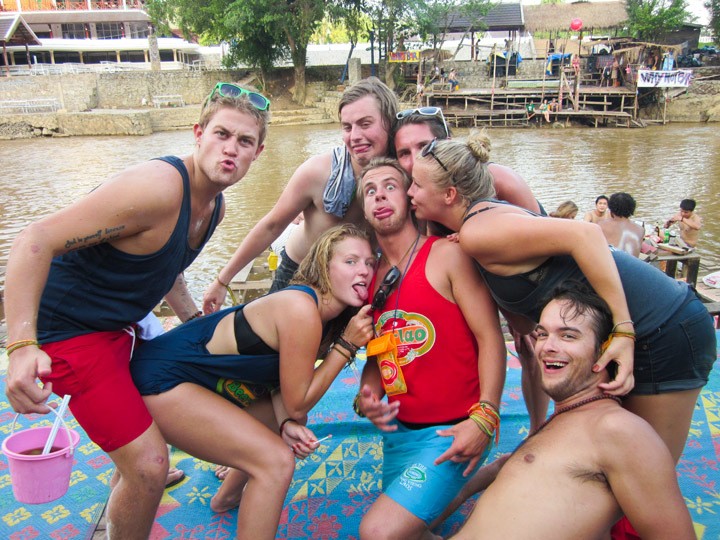 Locals once used the river for bathing, fishing, and relaxing with family. Today, the animistic-leaning Buddhist locals stay far away from the Nam Song — they figure there must be some pretty evil spirits in there for so many young people to have perished in its waters. It’s hard to imagine they would enjoy the river much today anyway, lined as it is by a series of 12 bars each heaving with bikini-clad, bucket-toting partiers nodding along to LMFAO.

At least the river is fairly secluded. Unfortunately, the party bleeds back into the town once the river bars close, and at sunset there is a mass migration of drunk, stoned and inappropriately dressed people shuffling back into the town. The locals have a phrase for this, and it translates to, “the zombies are coming.” It is a Laotian parent’s worst fear that their child will go down to work at one of the bars on the river.

Backpackers outnumber locals fifteen to one. The tradition way of life in Vang Vieng is over, and trying to go back is a lost cause. The economy here is now so deeply tied to the tubing that the local people have little option but to continue forward despite the emotions betrayed by their grim faces. I have not been surprised at all to read that as tourism develops around Laos, communities have expressed strong convictions that their town will not become “the next Vang Vieng.” I can’t really blame them. 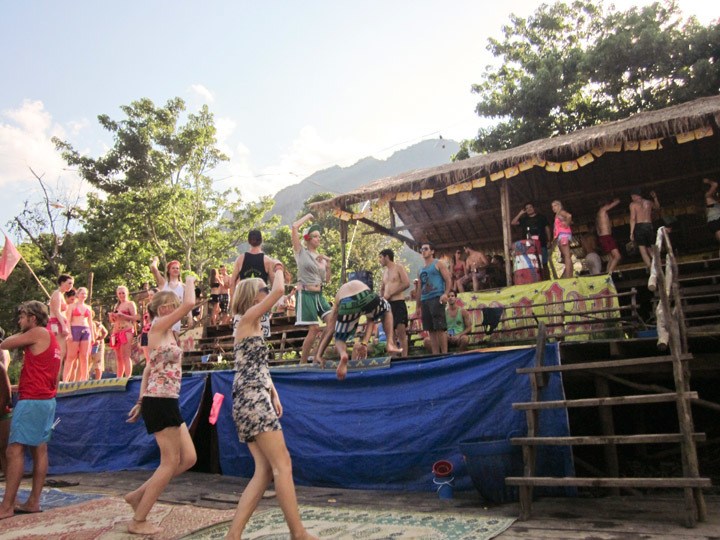 I participated in the debauchery in Vang Vieng (well, not all of it). I had a pretty great time, and I admit that I would even go back. But my time here was also tainted by guilt. As I sat at one of the bars along the river, sipping mindlessly on a mulberry mojito bucket, I watched a gaggle of kids scampering and playing behind the bars. My stomach turned as I thought about the impression these young children must have of Westerners. In town, we sit like zombies watching reruns of Friends and Family Guy on big screen TVs. On the river, we strip practically naked and take part in an orgy of sex, drugs, and techno music. Deep in an isolated community in an already isolated country — this is likely the extent of their exposure to the outside world. And what an impression we have made.

I’ve participated in my fair share of hedonistic holidays — I’ve rang in New Year’s Eve at the Full Moon Party and traveled to Honduras to take part in the uninhabited-island rave that is Sunjam. It’s fair to assume that those events have negative impacts on the local communities as well. But the Full Moon Party is once a month, and Sunjam is just once a year. The locals have time to recoup and recover in between — in Vang Vieng, its relentless.

Personally, I felt the resentment coming from the Lao people. Every interaction I had with a local person (with the exception of the bar boys down on the river) was laced with a bit of shame on my end. And on theirs, they seemed pretty reserved and quietly frustrated — certainly not the typical smiling Southeast Asian stereotype. And who can blame them?

Innocence is bliss, as the saying goes, and I enjoyed following the crowd this time in Vang Vieng. While I was far from the worst-behaved there, I definitely could have dressed more appropriately or forgone the river altogether. But while I can’t say I’m proud of myself I also can’t say I regret it. Vang Vieng was my guilty pleasure. 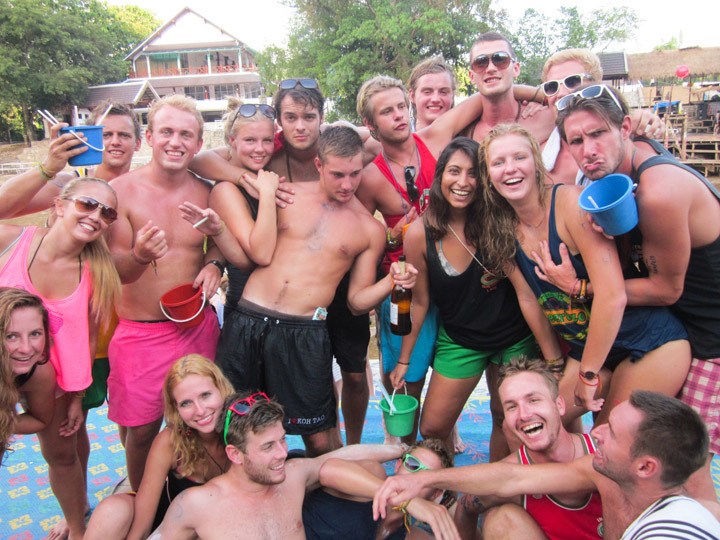 Responsible and ethical tourism is not an uncomplicated issue, and there are no easy right-or-wrong answers. Yet we all owe it to this beautiful country to take a hard look at our own actions when visiting and think about the way that they impact everyone and everything around us. Tourists can behave badly in Laos — and in Vang Vieng, I was one of them.

I want to know what you think. How do you feel about the way tourists are acting at Tak Bat in Luang Prabang and while tubing in Vang Vieng? Am I a hypocrite for disapproving of one group yet joining in with the other?

Ask Me Anything: Blogging Edition

Photo of the Week 58 The Seven Thousand Dollar Passport: An Adventure in Accidental Travel
34 Comments...