The taxi strike that saved us some cash by forcing us onto a shuttle bus from the airport into Athens was still raging on two days later as we scrambled to find a way to get to the pier. Little did we know we were approaching a decision that would lead to the lowest point in our trip, and probably ever in my travels. 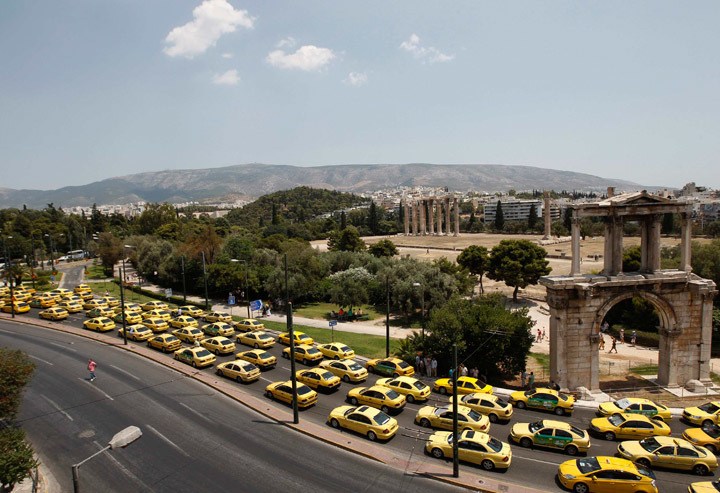 Our options were as follows: take the subway or go with a driver willing to break strike. Frankly, we did not understand the repercussions on the latter. But when we thought about getting on the hot, sweaty subway with our excess luggage, we wanted to cry. My mom, bless her, had brought an extra suitcase filled with my dive gear, (which I sent home filled with cold weather/dress clothes), so she was carrying two suitcases and a carry-on. I had a massive backpack, a frontpack filled with computer and camera gear, and shoulder bag of excess stuff to send home (go ahead and judge me, hardcore travelers with teeny tiny packs). And the subway did not go door to door, meaning we would have had to walk maybe fifteen minutes at the other end, with all our bags, in the blistering sun, not really knowing where we were going! The icing on the cake was the Athens metro’s reputation for pickpockets and thieves. I am by no means an alarmist but after reading countless tales on message boards and from fellow bloggers, (especially noting the downtown to Piraeus line) we just did not want to play that game.

We didn’t even know this was an option, but a solo cruiser we met chartered out an entire bus for himself as buses were exempt from the strike. It cost him hundreds of dollars for what is a pretty short ride, not to mention the waste in gas and resources, but at least no one got hurt.

So we took up our hotel concierge on her murmured offer to find a taxi driver willing to break strike and bring us to the pier. I’m ashamed to admit I thought to myself how very James Bond it all was when we handed over the money before getting in the car and he stashed it in a hiding place under the seat. We thought we were actors in a little play when we arrived at the pier, got out of the car and my mom gave the driver a hug and said, “Thank you so much for doing this for us, you are such a good friend.” We turned to walk away and everything fell to chaos. 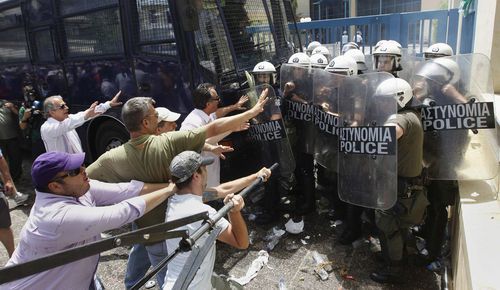 A group of men waiting under the overpass swiftly surrounded the car, and before the driver could get safely back in the vehicle they had him by the throat pushed against the door frame. One of them came towards us, shouting and demanding to know how much we paid. We said he was just a friend, we didn’t pay him, but it was an obvious lie. How would that friendship have started, between a Greek man so desperate for money that he was willing to break strike and risk his safety for a handful of Euros, and two American women heading out for an expensive vacation on a luxury cruise line?

It all happened so fast, it’s like remembering a dream. Representatives from our cruise line saw was happening and tried to whisk us away but it was too late. We already saw the damage we had caused. Angry shouts were flying in the air and our poor driver was being beaten by a group of thugs intent on punishing him for being so desperate for income during an endless strike. My mom was in tears and the pit in my stomach was endless. Whatever our intentions or reasons may have been, our actions led to a man being physically assaulted, probably robbed, and maybe arrested.

We were far from the only ones to have this experience, as we heard tales of traumatized children being hauled away by their parents after seeing their drivers get violently ripped from their vehicles. Now that I’ve had some time to reflect, I think that our cruise line, Silversea, should have provided shuttle buses to pick up passengers from their hotels. My mom paid a serious premium to go with a luxury cruise line, and part of our experience should not have been choosing between breaking a strike, paying a stupid amount to charter a bus for a fifteen minute ride, or taking an arduous and dangerous subway ride.

But in the end, they did not offer that option, and so the decision was ours alone to make, and we have no one to blame but ourselves for the outcome. As the saying goes, hindsight is 20/20 and we now know we made a mistake, but what was the right answer? What should we have done? What would you do?