After a, um, culture and education filled morning at Siam Ocean World, I wanted to indulge my parents’ inner art and history nerds. So while my sister went straight for the closest spa, the rest of us headed for The National Museum and The National Gallery. (Remember, never judge a South East Asian tourist attraction by its website). 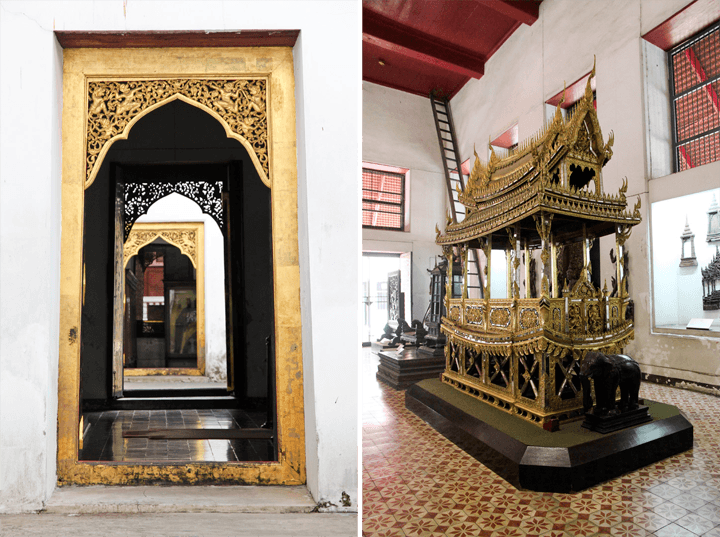 Visiting The National Museum is the first thing I ever did in Thailand, way back during my first visit in 2009. Three years later, and many things remain the same: the admission is still 200 baht ($6usd), there is still a notable lack of air-conditioning, and the halls are nearly completely devoid of tourists. 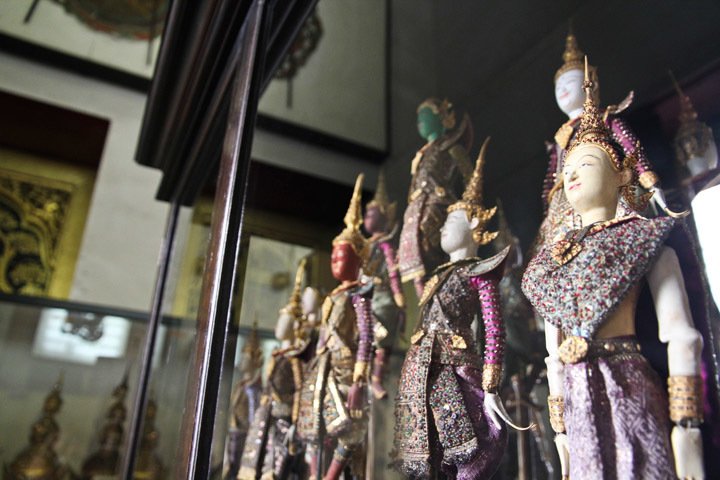 And I still find it just as charming as I did the day I arrived in Thailand. The crumbling old regal facade, the endless rooms of dusty artifacts and the delicately tiled floors of the sweltering galleries are all exactly what I pictured of South East Asia, perhaps after too many viewings of The King and I 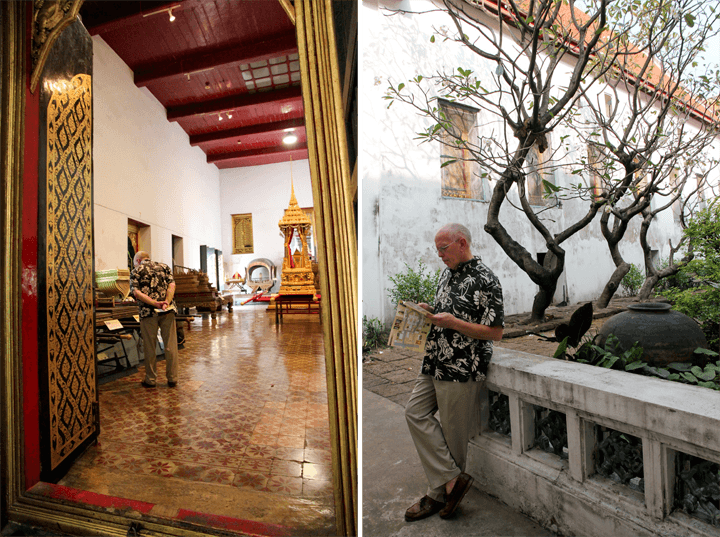 Even for non-history buffs, The National Museum is worth a visit. I’m always surprised how few backpackers make the 10-minute walk from Khao San Road to soak up the atmosphere and take in a bit of history about the country they are in. 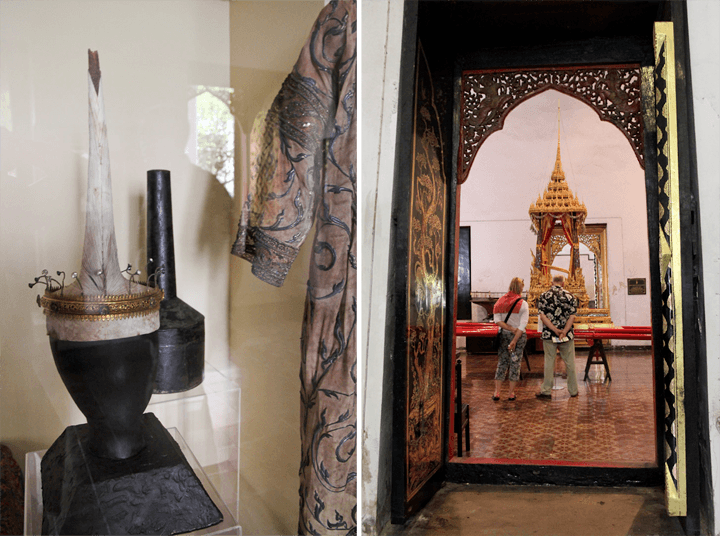 We spent two hours exploring the National Museum, the largest museum in South East Asia! For those short on time, I recommend visiting the Gallery of Thai History for some historical background and insight into Thailand’s devotion to the monarchy. Next, visit the Isaari Winitchai Hall (the 500s galleries on the map) to see exhibits dedicated to Royal Regalia, Gold Treasures, Theatre Art and Games, Costumes and Textiles, and Musical Instruments. On the way out, stop at the museum’s highlight, the Hall of Royal Funerary Chariots. These enormous creations are some of the most intricately detailed works in the entire museum. They are still in use for funerals of the Royal Family and if you’re lucky, you’ll catch a restoration team working to prepare one for duty.

If you go: The museum is open Wednesday-Sunday from 9-4. Admission is 200 baht. Guided tours in English are offered every Wednesday and Thursday at 9:30am and every Saturday at 10am. 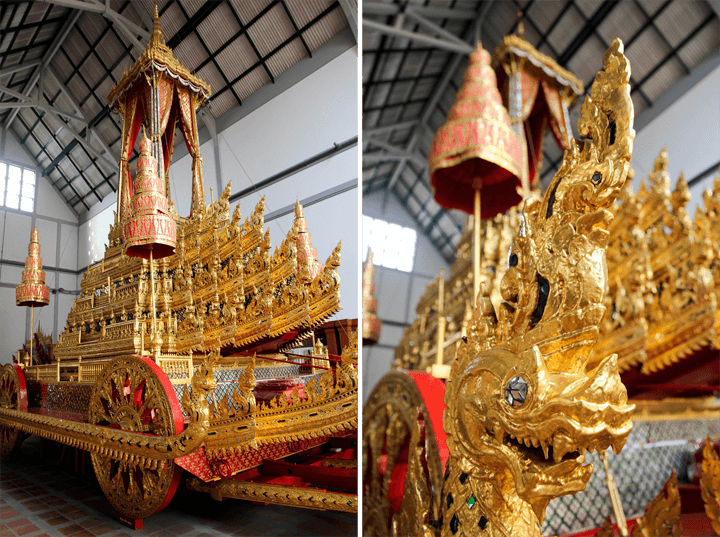 Our next stop was the nearby National Gallery. I had visited solo in August and been disappointed to find half the galleries closed. Still, my hopes were high. 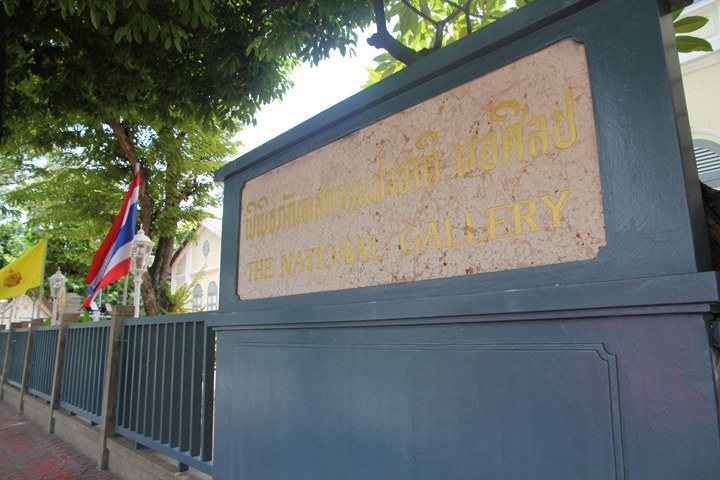 Perhaps a little too high. There are a few galleries of interest. The second floor is home to a modest collection of traditional Thai paintings, which I enjoyed looking through. 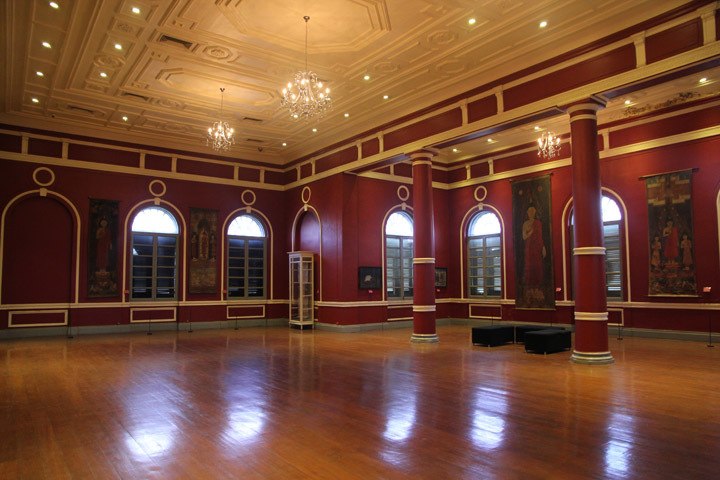 The portraits in the gallery of Western Style Thai Paintings were an interesting juxtaposition. But by far, the highlight is the small gallery of The King’s Paintings. It’s fascinating how the Thai adoration for the monarchy extends even to support of the King’s hobby of painting. I simply can’t imagine the National Gallery of Art in Washington DC displaying a drawing by President Obama, let alone next to a placard featuring effusive praise. 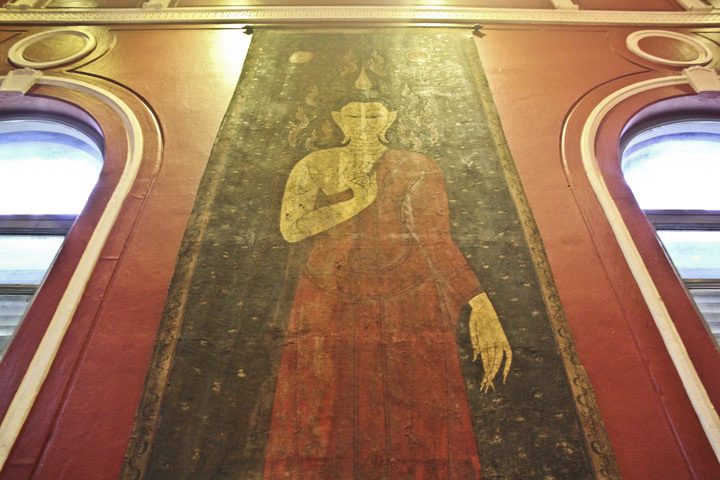 Outside of those three galleries, the very small museum is filled with a rotating collection of modern art. I realize that this could be hit-or-miss, but for us… it was a miss. And I’ve heard similar criticisms from Bangkok-based art fans. 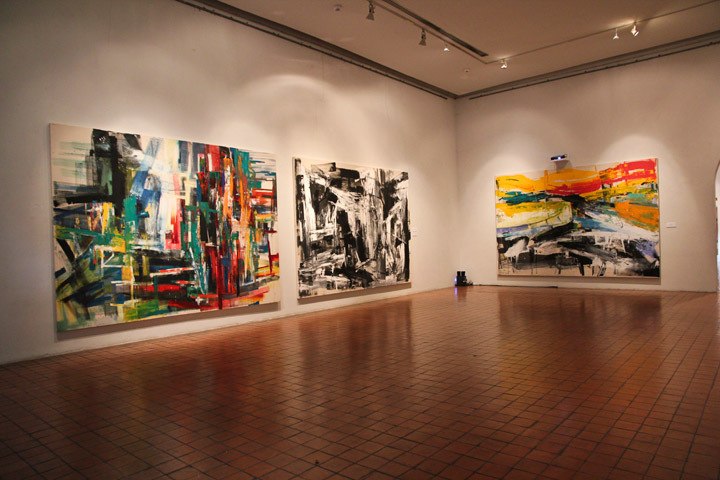 As much as it pains me to say this, The National Gallery is not worth the 200 baht entrance fee. And considering the fact that 200 baht is a mere $6 usd, that’s saying a lot.

If you go: The gallery is open Wednesday-Sunday from 9-4. Admission is 200 baht. 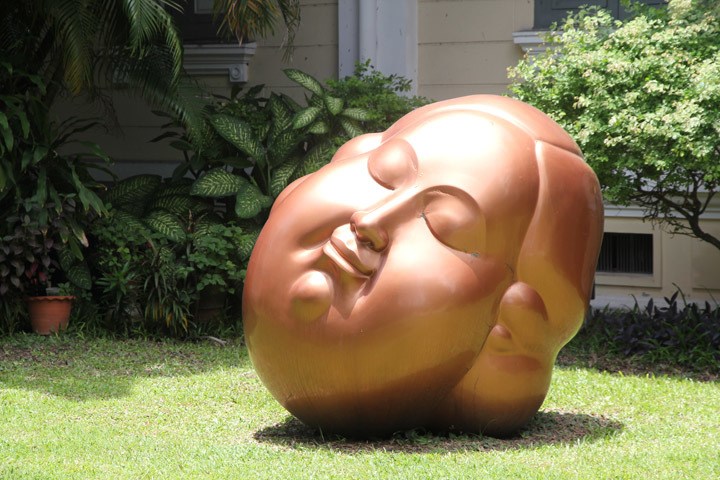 This art lover is going to have to look elsewhere in Bangkok for a great collection! Any suggestions, readers? 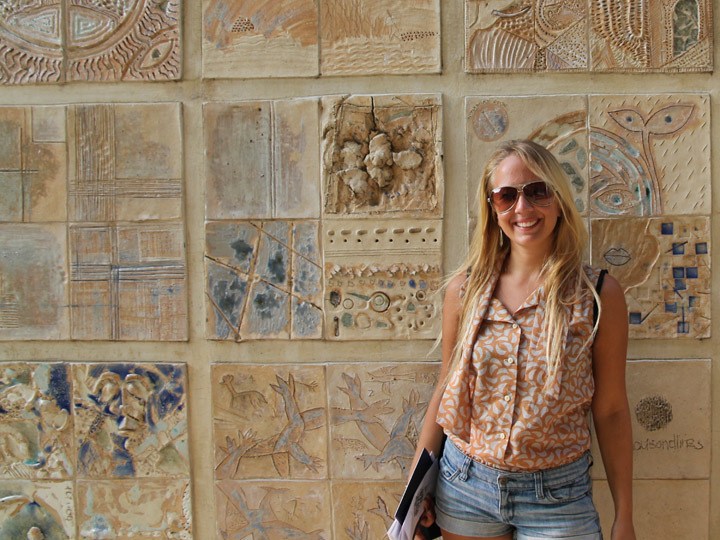 We finished our final night in Thailand with a visit to the Siam Niramit show. My mom and sister are very into theater and I was looking for something similar to the many Aspara Dancing shows that one finds in Siem Reap. Instead I found a very expensive equivalent to an off-the-strip Las Vegas show. 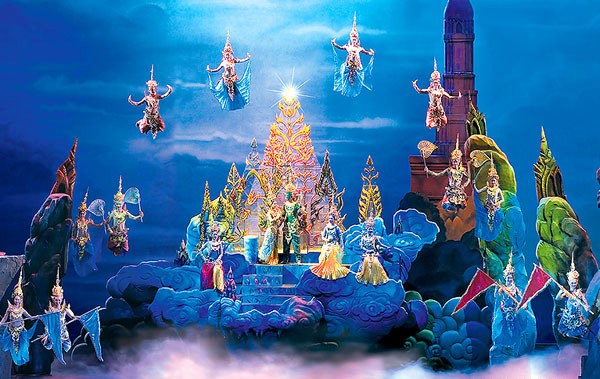 The whole thing was so bizarre that even over a month later I can’t properly collect my thoughts. It alternated between mildly entertaining (some nice sets), unintentionally hilarious (an unexplainable scene depicting hell), pretty impressive (costumes, elephant on stage) and absolutely snooze-worthy (I was the only family member not to fall asleep). Also, they made me check my camera and for that I pretty much hate them.

Again, I’m at a loss. Do any readers have any suggestions for cultural/family friends shows or evening entertainment in Bangkok? You know, for those of us crazies who don’t want to bring our parents to Soi Cowboy. 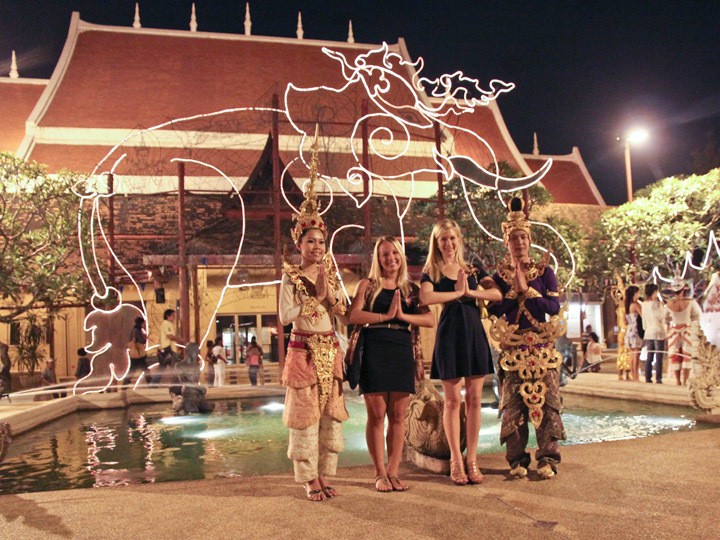 And with that, our whirlwind Bangkok tour was complete! The next morning we would wake at a horrific hour in order to catch a flight and a ferry to Koh Tao… 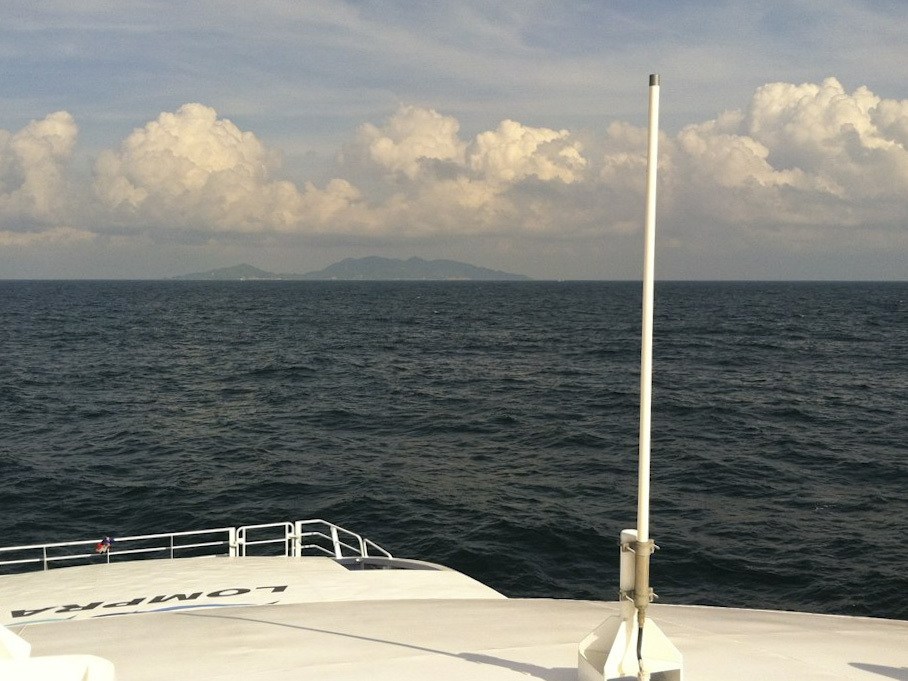 If you’re planning something more strenuous than a museum visit in your travels, it’s time to start researching holiday insurance! Better safe than sorry…

Looking Back on Life in Paradise

Splashing Out at The Outrigger Koh Samui