Our third and final day in Bangkok started with a one-of-a-kind cultural attraction experience that could not be replicated anywhere else in the world. 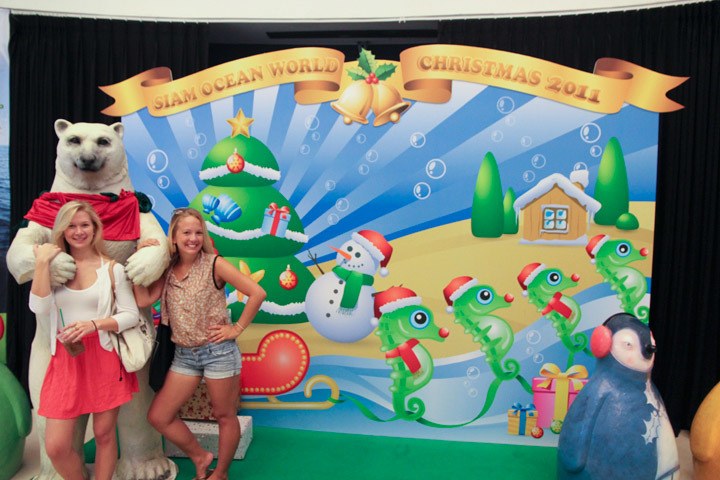 Well, not really. We went to the aquarium. But not just any aquarium! No, this one was special. This one was Siam Ocean World. And like the rest of Bangkok, it was appropriately decked out for the Christmas season. 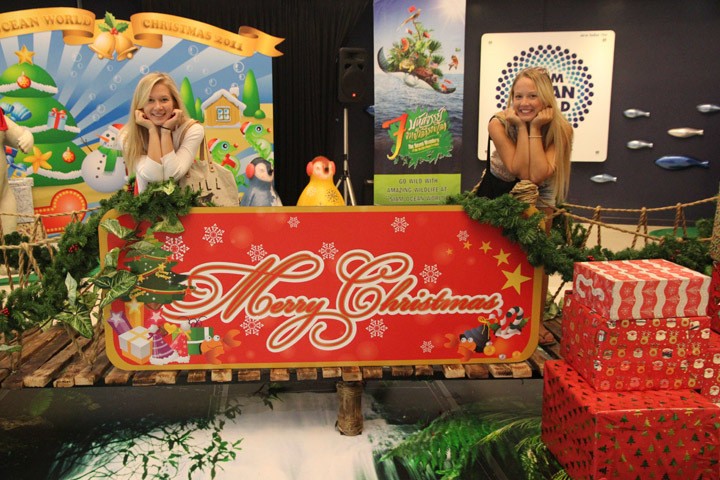 Siam Ocean World is located in the basement of Bangkok’s swankiest shopping center, Siam Paragon, and it has the prices to match. Admission to the aquarium alone is pricey at 900 baht ($29usd), but you’d be crazy not to upgrade to the “Superior Package,” boasting oodles of extras, for 1,100 baht ($36usd). Those on a budget should look for Ocean World brochures around the city- I spotted one with a 20% off coupon. Also try asking your hotel concierge if they offer discounted admission (many do!). 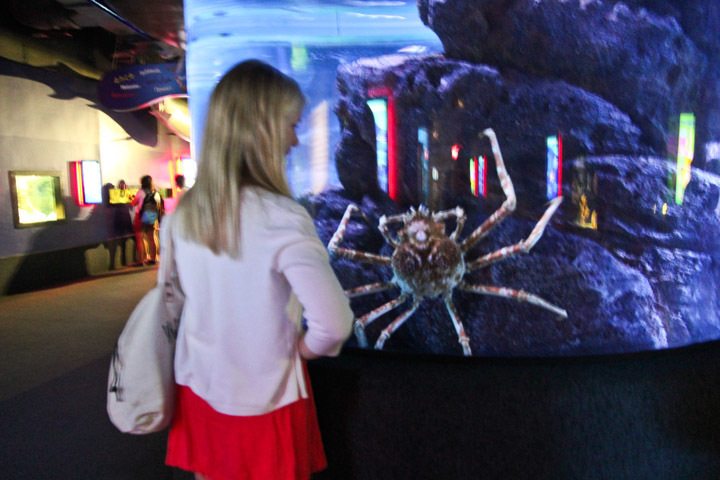 We thought we’d beat the crowds by going in the morning on a weekday, but we were forgetting one major factor: school field trips. And when Thai tots go on school trips they inevitably wear adorable tiny uniforms designed to distract you from the fact that they are traveling in groups of one hundred and are under strict instructions to squeal, shriek, and run in circles as much as possible. 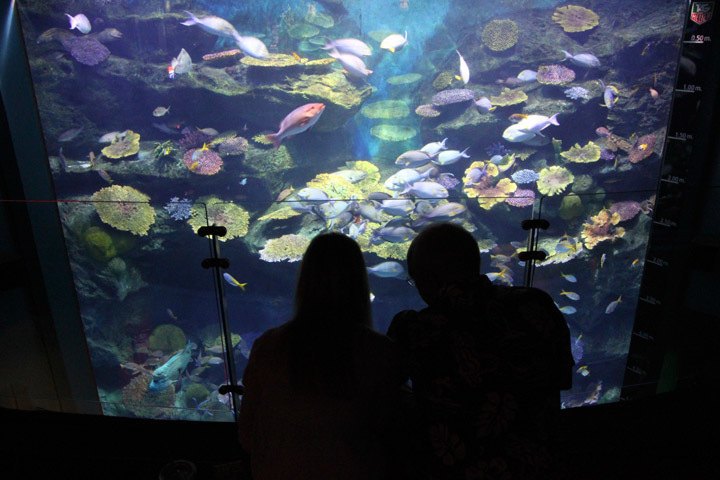 We quickly realized that this was not an aquarium focused on education, but rather on entertainment. There may not have been detailed signs explaining the behavior of every animal, but there was an exhibit on the Loch Ness monster! The tanks and habitats were top-notch and well designed, somewhat reminiscent of a Disney production. 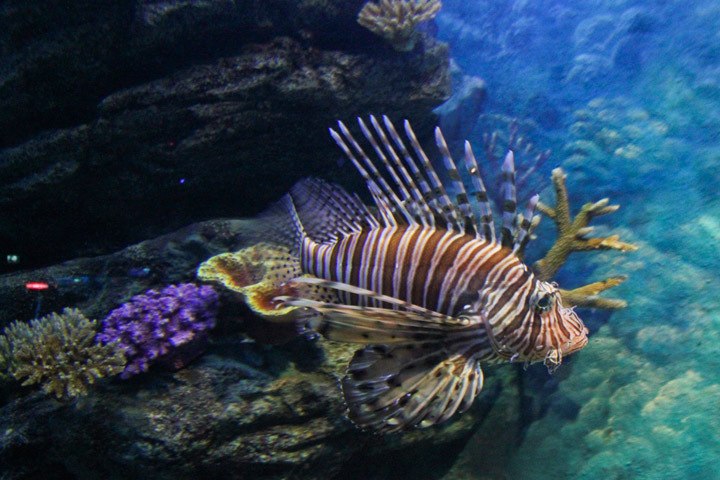 The first perk our “Superior” ticket entitled us to was the Back of the House Tour, where as you can see from the photo below, photography was strictly prohibited. While the tour was brief, it was an interesting peek into the mechanics and machinery that go into keeping up the largest aquarium in Southeast Asia (according to them, anyway!) Having been to aquariums all over the world, I had never put much thought into what would go into keeping them clean, healthy and thriving environments. It was an eye opener! 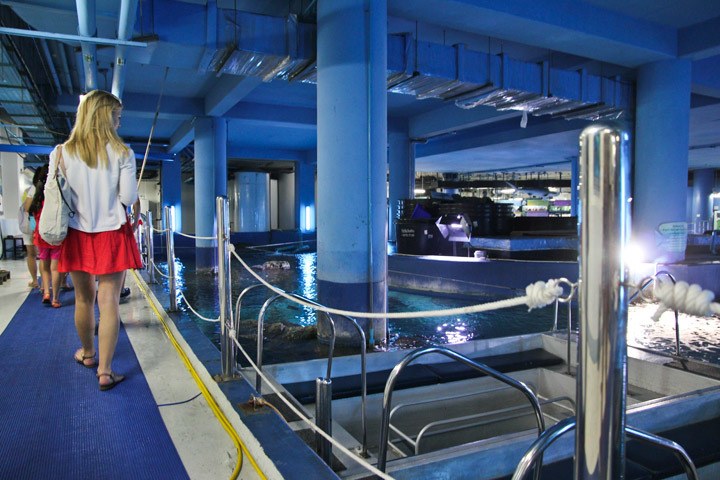 At the end of the tour we were led into bonus activity number two- a glass bottom boat ride over the aquarium’s largest tank. I can see why some visitors might question the need to ride on top of a tank they would otherwise see from other views. My answer: the novelty of it! When’s the last time you wore a life jacket in an aquarium? 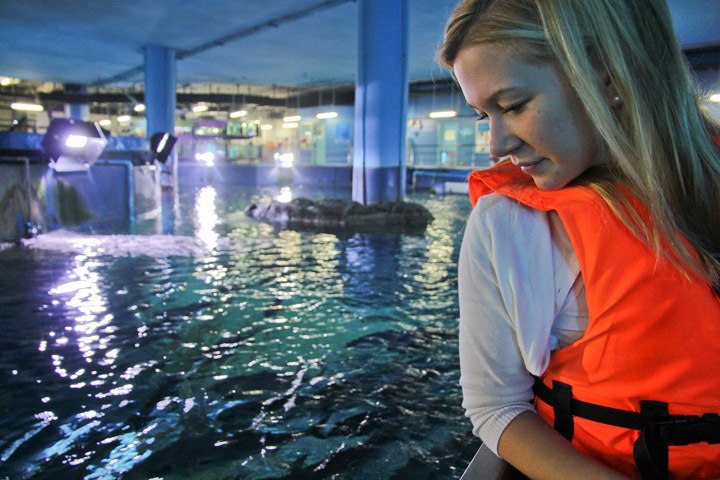 Back in the main aquarium I was appreciating how some of the exhibits featured sea life local to the area, like this tank of batfish, a creature I usually see while diving in Koh Tao. 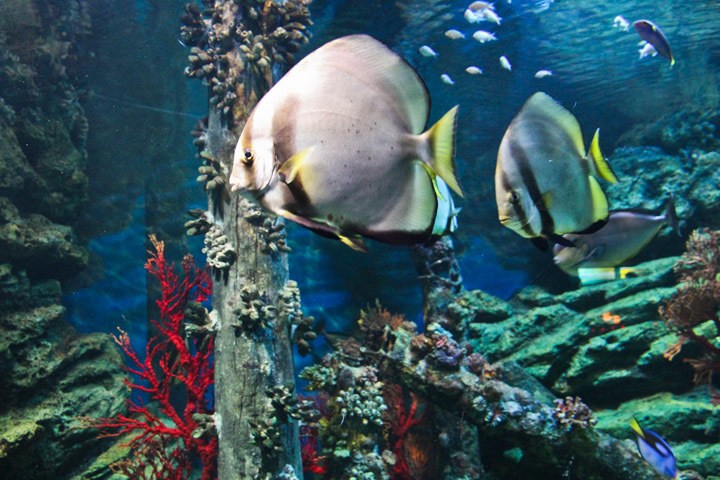 Some of the habitats themselves related to our location- such as the one below that hints at some distinctly Thai ruins. 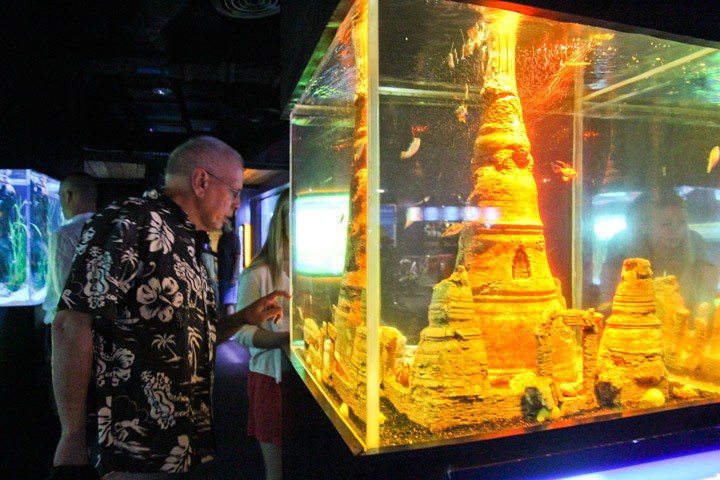 One of Siam Ocean World’s largest and best exhibits was the Rainforest Zone, which again seemed to have been designed by someone from the Disney group. There was even a cheesy photo-booth setup that we indulged in. 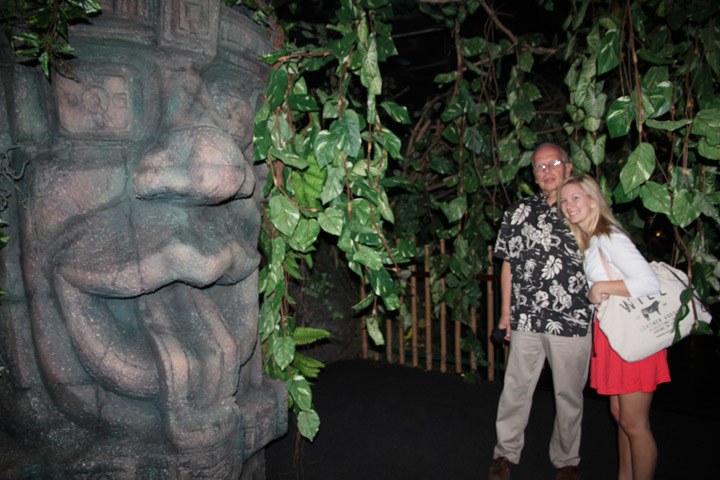 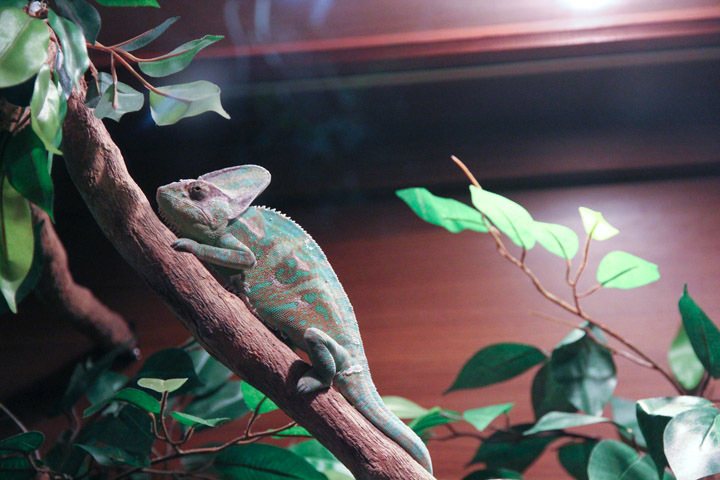 I was already pretty fascinated by the Amazon rainforest and the many creatures that call it home, but this particular fish pretty much blew me away (and I can’t for the life of me remember its name!) 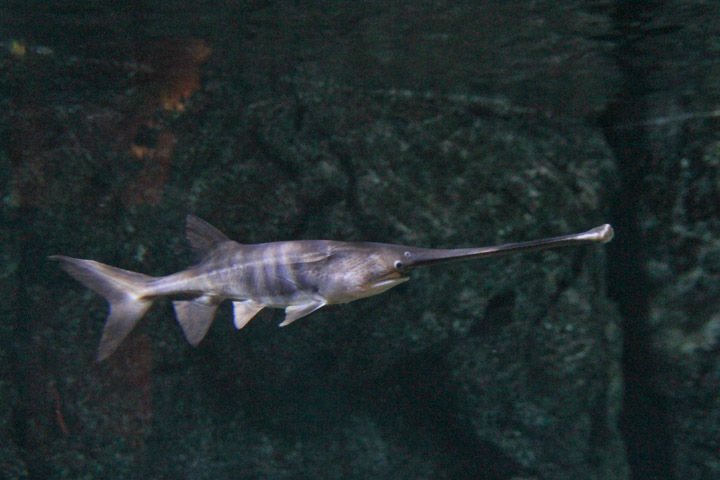 The highlight of the day was the otter feeding we stumbled upon. It was absolutely packed with the aforementioned school groups, so we almost passed it by. But then we found a hidden window offering us a front-row view from the back of the tank. The ensuing view of otters throwing plastic balls into a bucket in order to earn fish snacks was so cute I couldn’t look away for even an instant to grab my camera. 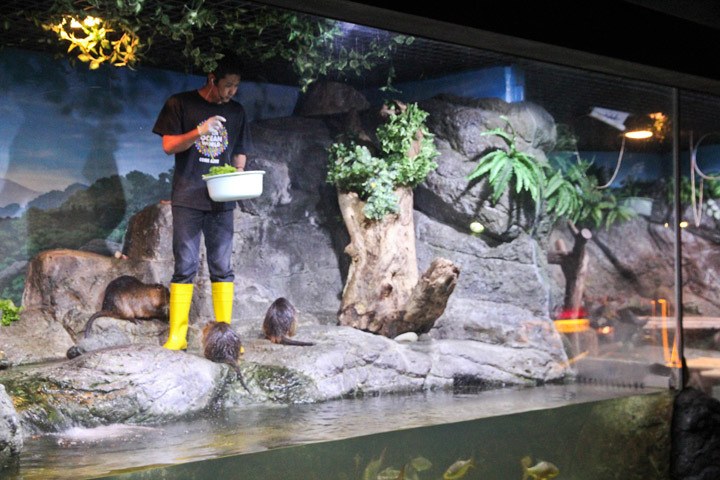 Soon it was time to cash in our “Superior” tickets once again with a free Pepsi and popcorn (this Diet Coke loving family was not impressed) and a seating at the Happy Fish/Happy Feet spa. It was your typical Southeast Asian fish spa setup of sticking your feet into a tank of swimmers eager to nibble away at your dead skin- with the added bonus of a sharky view. 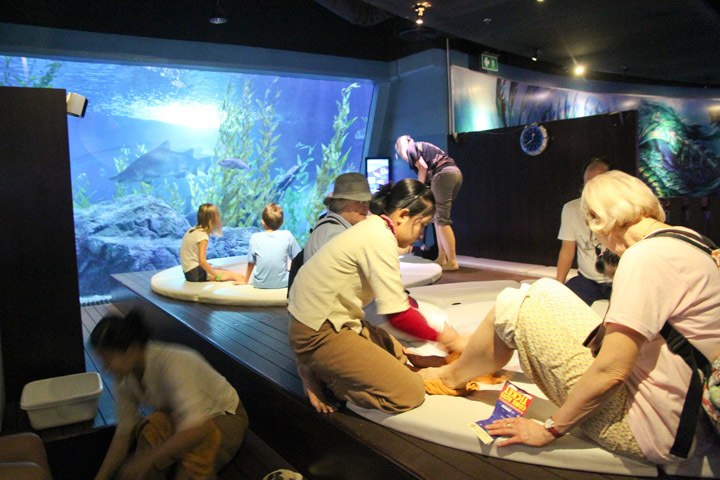 I’ve never indulged in a fish spa before and was excited to finally try it out, but unfortunately these fishies were full and had no interest in exfoliating my toesies. 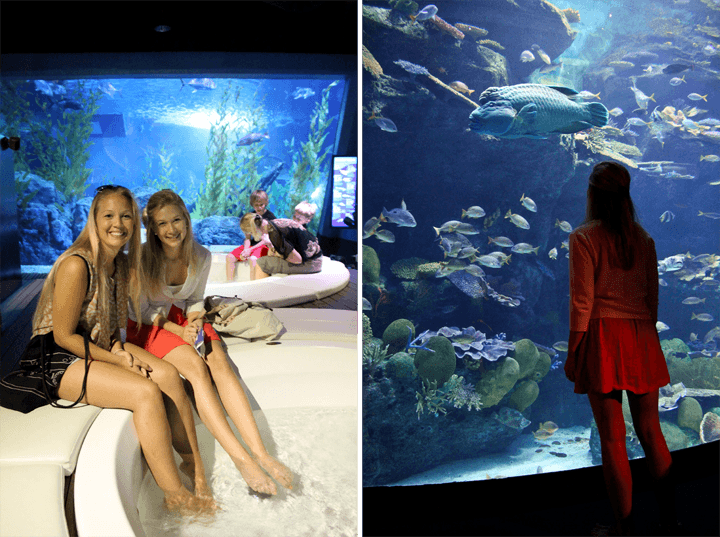 Next up was what has become the Holy Grail of aquarium visits – the walk-through tunnel. These exhibits allow you to feel a sensation similar to scuba diving. You are in the water, moving through it, with prey and predators swirling around you. 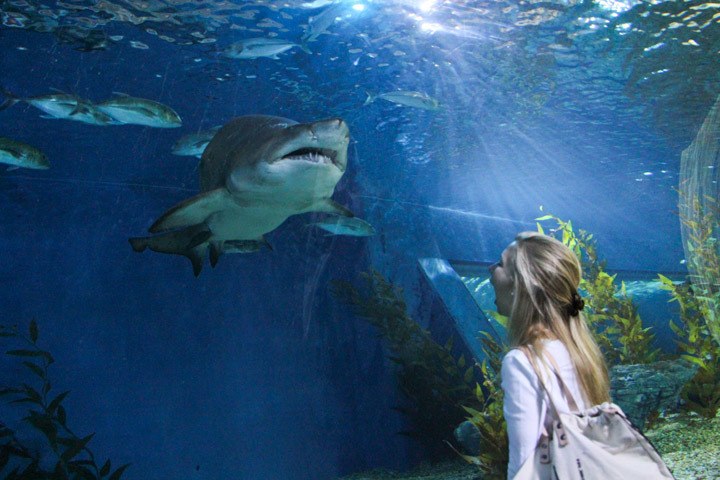 The sharks in this one were particularly toothy and creepy-looking. 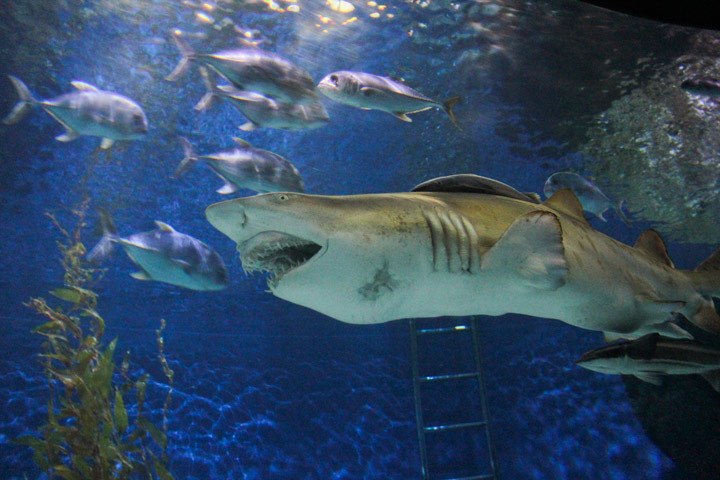 And on our way out I managed to snag one of my favorite photos, ever, of my sister alone in the tunnel (see below right). Not to get big-headed, but I think it could be an ad for the aquarium! 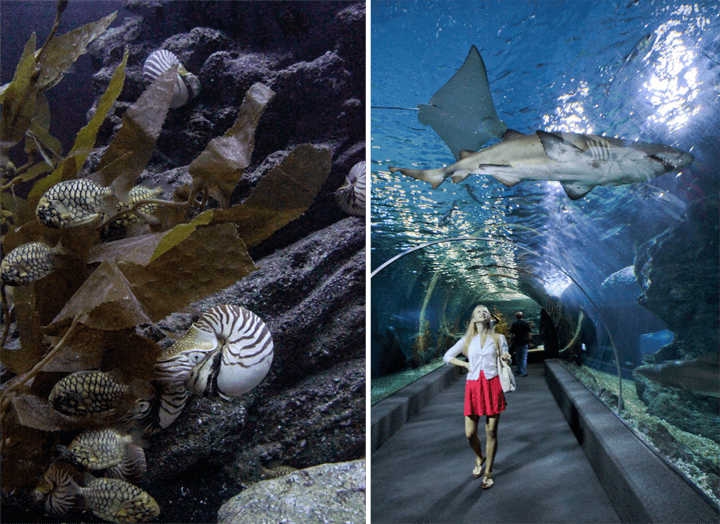 At the exit there was a silly interactive play area, perhaps intended for children, that we just couldn’t resist. 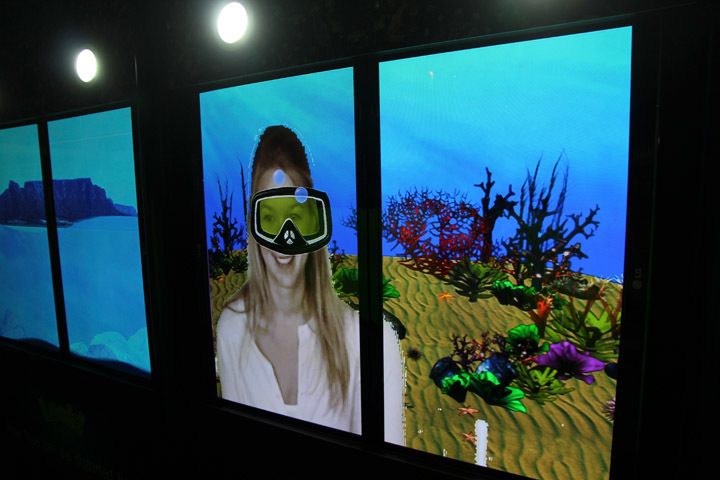 My favorite photo-op: a ubiquitous Thai tuk-tuk with a shark in the backseat.  Love it. 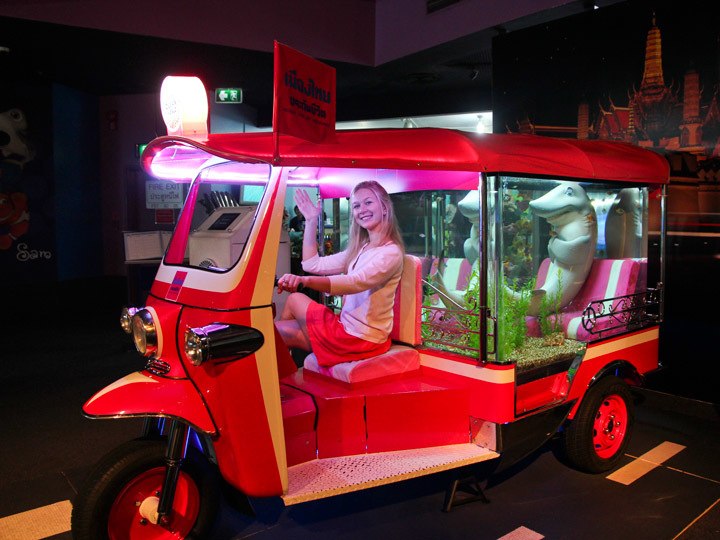 Yet another perk our Superior ticket entitled us to was the 5D Cinema. I’m still not sure what the 5th dimension was, but it might have had something to do with the air that kept blowing up our butts from the seat, prompting a round of giggles each time. The message of the Nemo-reminiscent film was about conservation, a nice touch otherwise lacking from Siam Ocean World. 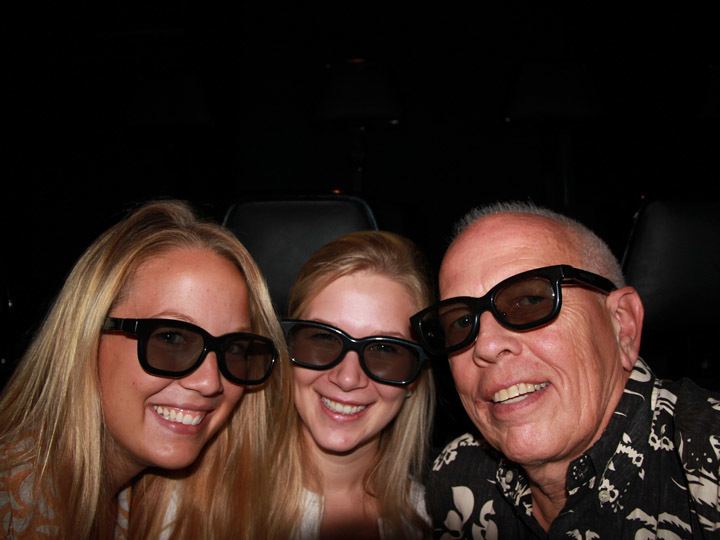 But there was one last surprise to come. When we went to punch the final section on our ticket, the one for a free souvenir, we were presented not only with these Ocean World keyrings but with the opportunity to buy a framed copy of our photobooth pictures. I’m not saying whether or not we took it. You’ll just have to come to my apartment and see if it’s perched on the TV stand next to my souvenir plate collection. 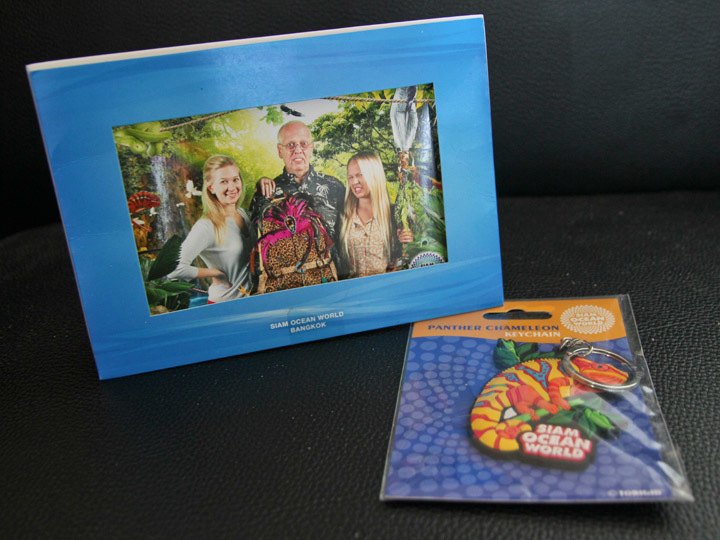 Do you have half a day to spare in Bangkok? Splurge and indulge your inner child to a day at Siam Ocean World. You won’t regret it! I’ve been to aquariums all over the world, from Boston to Kuala Lumper, and this was one of my favorites. What’s the best aquarium you’ve ever been to? I’ll add it to my list! 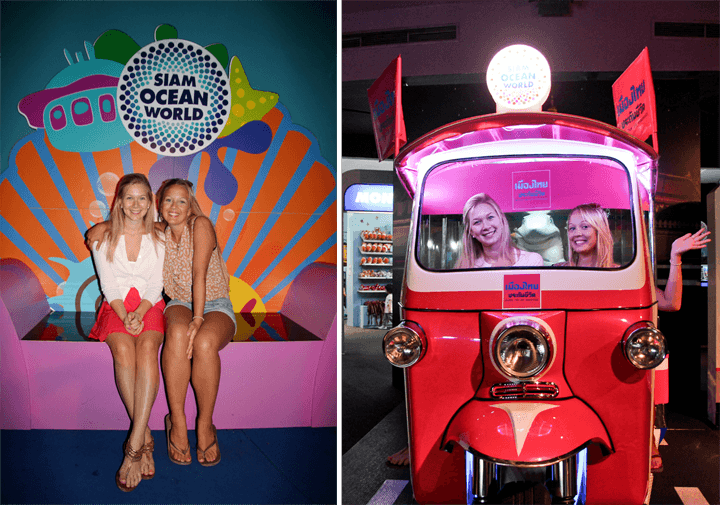