Our epic time in Bangkok had come to an end. But luckily for us it was immediately followed by a week of celebrating the holidays in the Gulf of Thailand! I was so excited to show my family tiny Koh Tao, where I’d been living for six months, to explore some of the touristy things I hadn’t had the chance to do, and to start getting festive. And nothing says “Christmas Eve in the Tropics” like going ziplining between two islands. 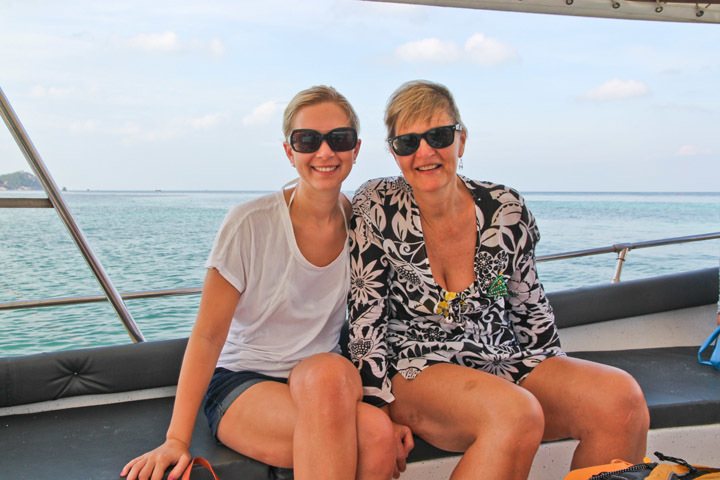 I’ve only been ziplining once before, in Honduras, and while I had a good time I wasn’t blown away. I hadn’t heard the best reviews of this one either, but I knew it would be a good group activity, and I wanted to bring the family to Koh Nang Yuan, where the zipline is located, anyway. Koh Nang Yuan is located northwest of Koh Tao, a mere ten minute boat ride away. It’s composed of three teeny islands connected by one large sandbar, the image of which graces postcards across the Kingdom of Thailand. It boasts one resort, some of the best snorkeling in the country, and now this: the world’s first island-to-island zipline. 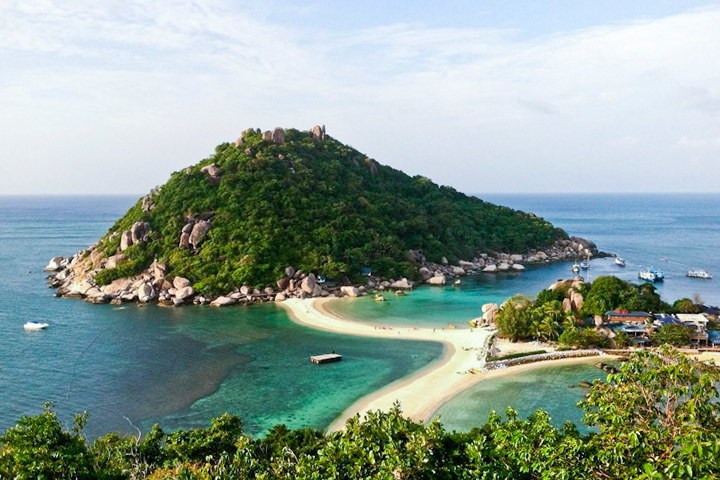 Taken later in the trip with my sister’s iPhone. I can’t believe what those phones can do!

We left early in the morning, before the island was over-run with day trippers and beach-goers. We quickly realized that crowds wouldn’t be much of an issue that day. Unseasonably high water levels meant the sandbar was non-existent. Luckily we had another mode of transit: the zip! 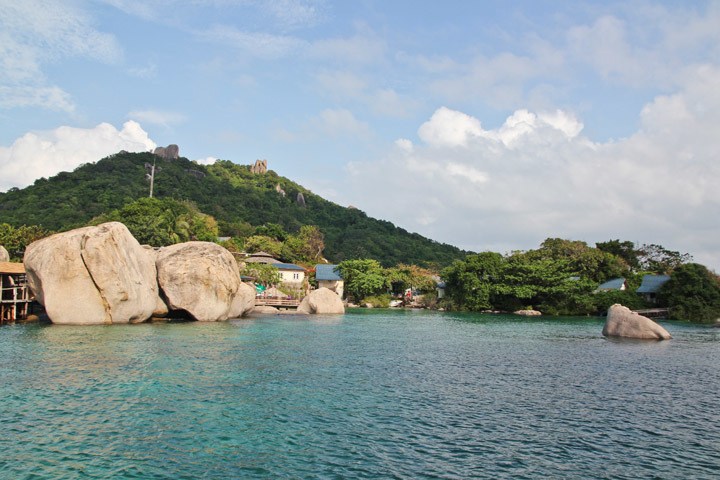 As soon as we arrived our guides kitted us up with harnesses, helmets, carabiners, and Crocs. While they indeed make an amazing fashion statement, the reasoning behind the Crocs isn’t appearances. It’s to keep tourists from losing their flip-flops to the ocean they’ll be flying over. As we giggled over choosing what colors our footwear for the day would be, I was reminded of one of my favorite proverbs:

“Never judge a man until you’ve walked a mile in his shoes. Unless they are Crocs.  Then judge him immediately.” 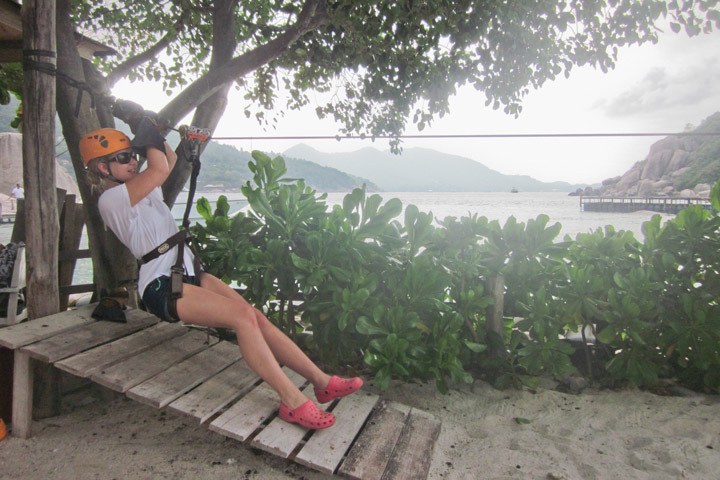 We each took a few spins on the practice zip, basically learning how to control our speed and stop, and then we were ready to go. The only tricky skill was pulling yourself forward if you stopped too soon and got stuck on the line. 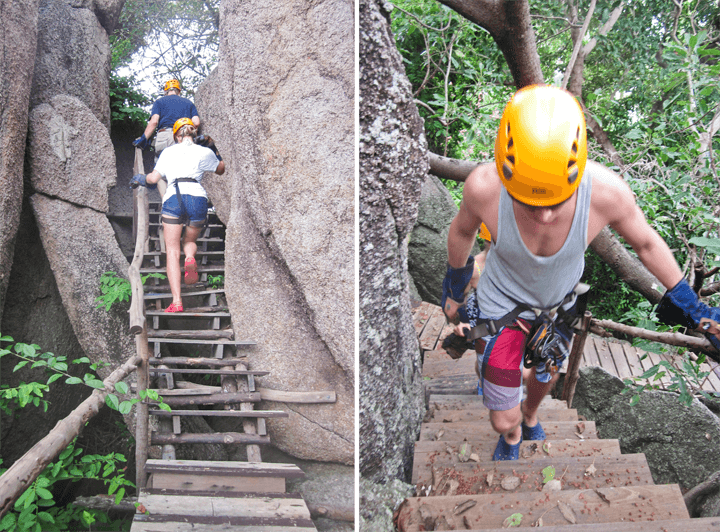 The path up to the first platform brings you up rickety stairs, between boulders, and across the side of a cliff. Normally this would be a beautiful viewpoint, but you can see in the photo below the state of the disappeared sandbar. My mom, Chief Zipline Enthusiast, volunteered to go first. The staff hooked her up and tied her in themselves, leaving no room for error. 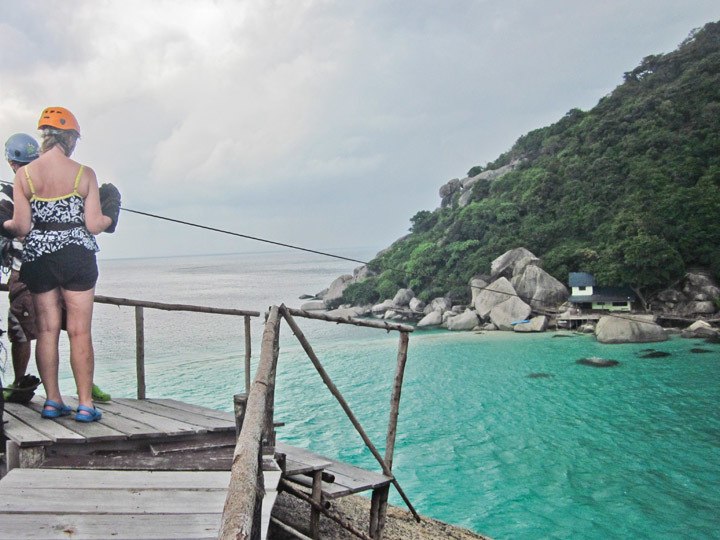 We took turns flinging ourselves off the wooden platform and across the shallow ocean below. While the sky was growing more ominously cloudy by the moment, the water stayed bright turquoise blue. 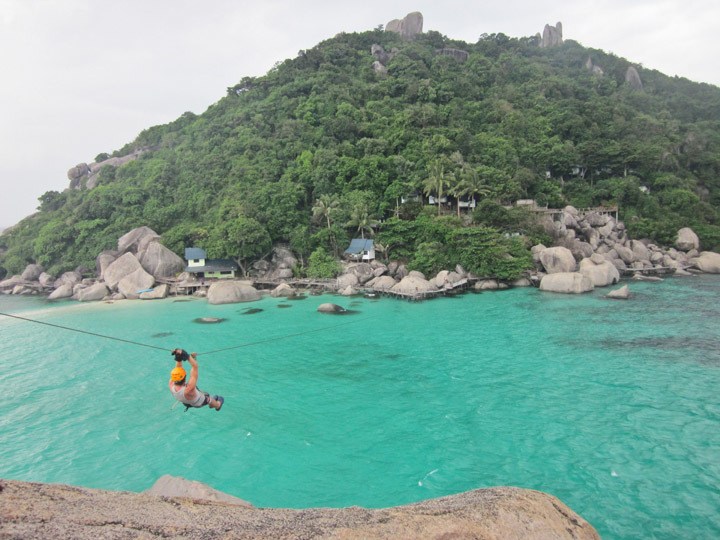 It really was fun watching each other and cheering on as one by one we made the first zip. 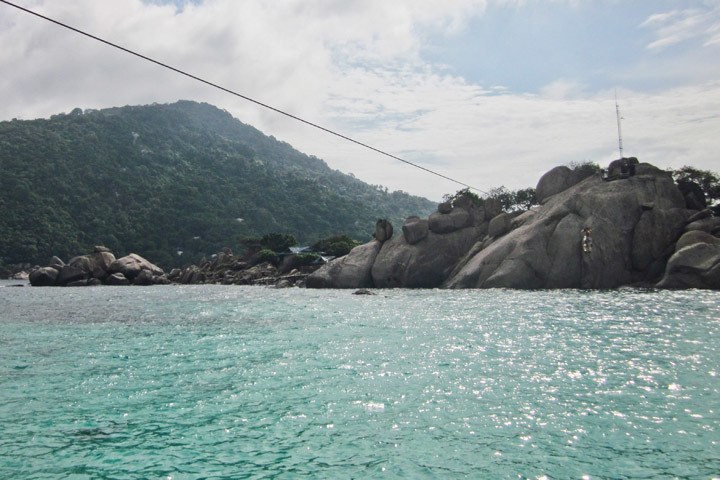 The only real skill comes in at the last moment when you have to stop yourself quickly enough that you don’t slam into the tires tied up at the end of the line but not too prematurely that you then have to pull yourself hand over hand towards the end. One of my favorite sayings is “In Thailand: Safety seventh!” but with the tires there, the chance of doing anything more than embarrassing yourself and getting bruised up is low. Compare that to the zipping we did in Honduras, where if you didn’t catch yourself in time you were slammed into some unforgiving looking boulders. 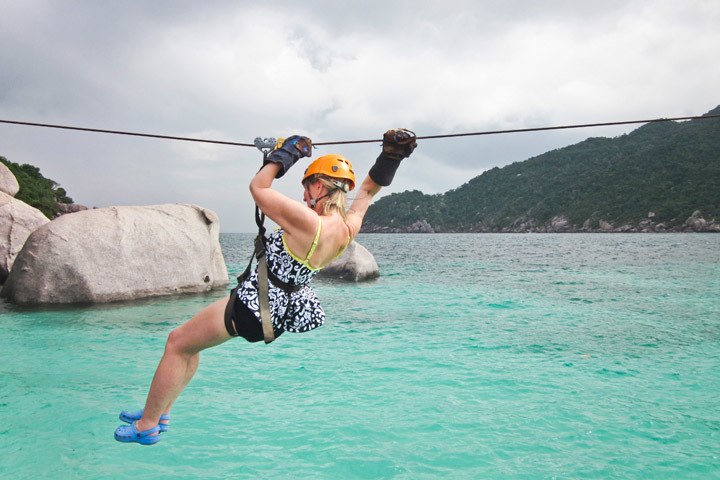 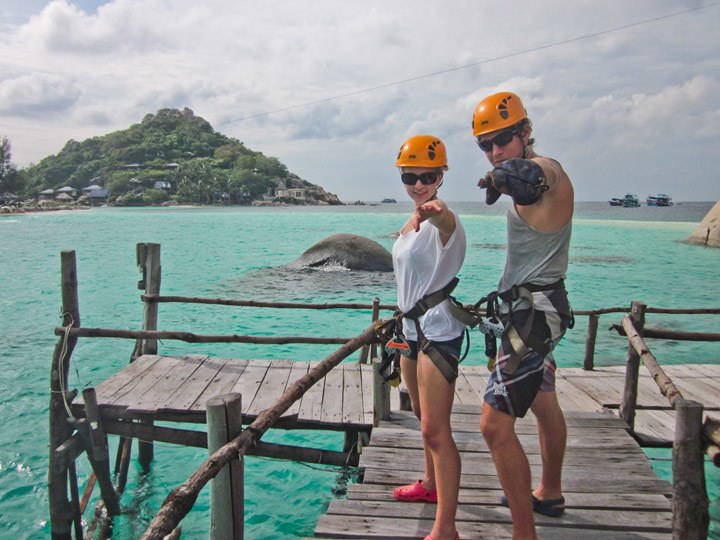 We took another mini-hike up the second island to get to the departure platform for the second zip.  This one was longer but as a smaller incline, making it a bit less exciting of a ride. You do have to burst through some foliage at the beginning, which makes for a dramatic entrance. 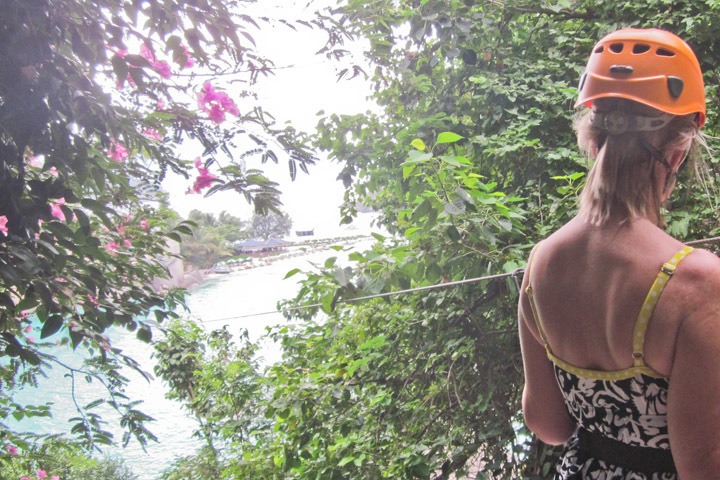 At this point it started to rain lightly, which made the ziplines slick and in this adrenaline lover’s point of view, more fun as we picked up more speed. Now, I’d like to take a moment to pause and admire one of the few times in life I’ve managed to have a semi-color coordinated outfit on, through none of my own efforts: Coral colored bikini? Check! Orange helmet? Check! Bright pink rental Crocs? Check again! 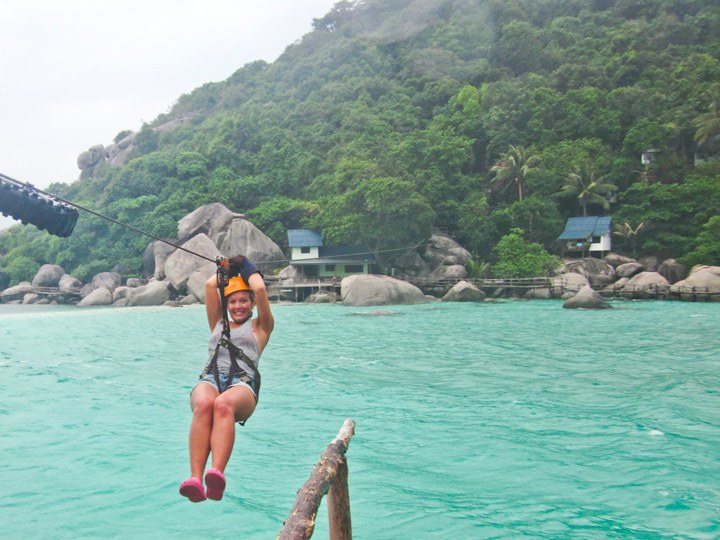 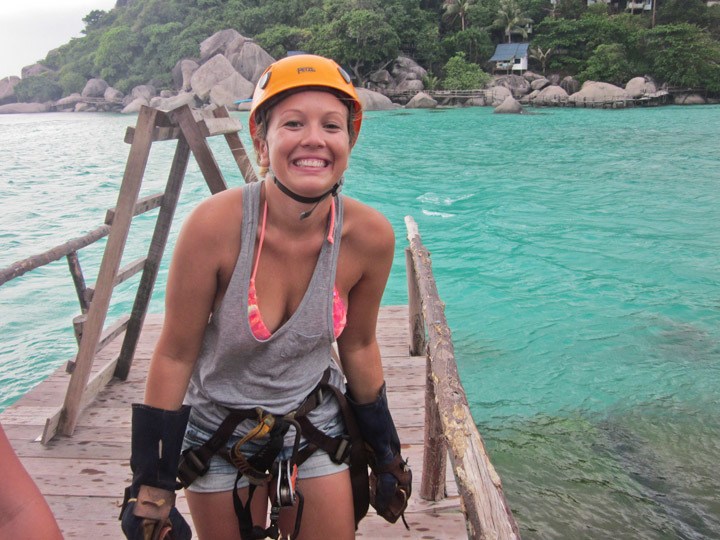 After we went back and did each line a second time, making for four zips in total. The whole thing took about an hour and a half. 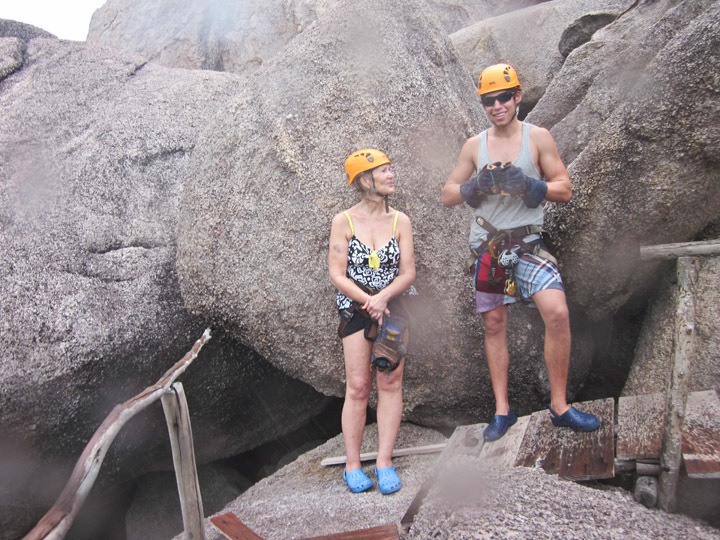 It was one of the best Christmas Eves in recent memory, and led to one of my favorite family photos ever taken. 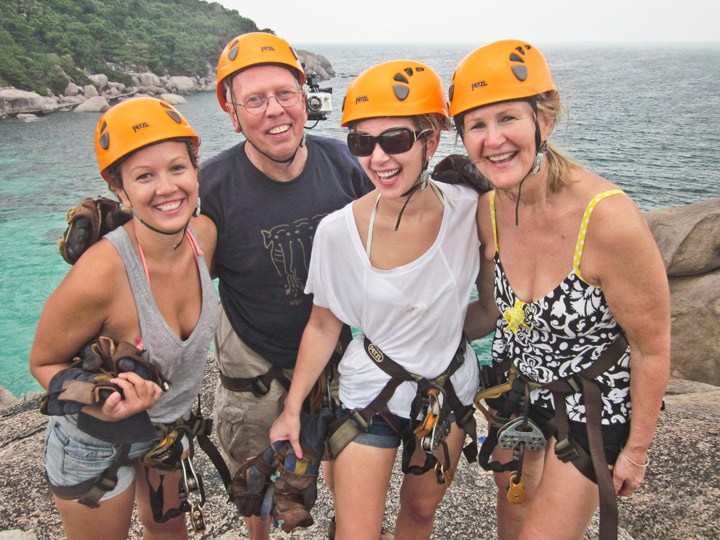 If you too wish to zip, you have a few options. Option one is to DIY it. You can get a longtail to bring you from Koh Tao to Koh Nang Yuan (200 baht return), pay the entrance fee, yes this island has an entrance fee (100 baht), and then sign up for the ziplining on the spot (1,000 baht).  Total cost: 1,300 baht per person. The upside is you have as long as you want on Koh Nang Yuan and you don’t have to book ahead. The downside is they may be booked up or not available that day.

Option two is to go through Goodtime Adventures in Koh Tao. They have two packages, one that includes boat, entrance fee, and zipline all for 1,400 baht, though you are rushed off the island immediately after the zip. The second option includes time to snorkel and hike to the viewpoint where the second photo in this post was taken for 1,800 baht. If you are interested in booking ahead of time but want to spend more time on the island, try negotiating with them for a later boat ride included in the first package. 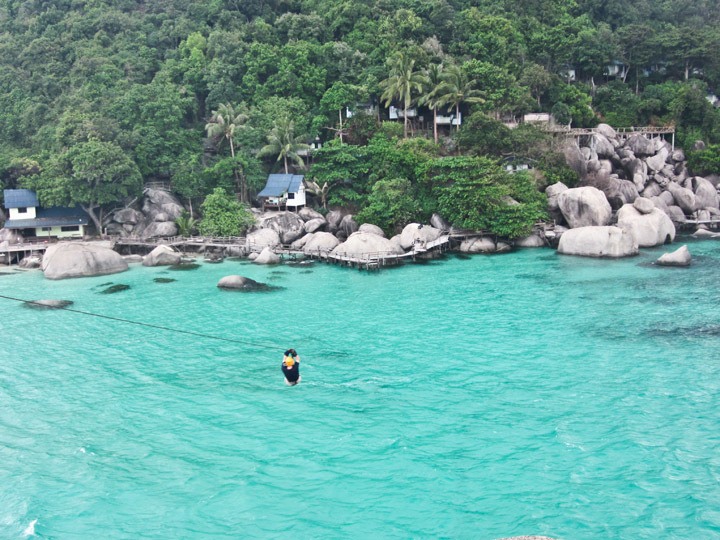 Compared to the cost of other ziplines around Southeast Asia, and certainly around the world, this is a good deal and a fun time. Hardcore adventure sports fans might find it a bit tame, but if you’re looking for something to do on the islands outside diving or sunbathing, ziplining on Koh Tao just might be the perfect thing.

I made a video of the day from the footage captured on my Dad’s helmet cam, but unfortunately after many frustrating upload attempts YouTube is still telling me this video is banned in the USA and inexplicably, Bermuda. Sorry, American readers! I will update you once I find a version that Uncle Sam deems acceptable. To the rest of you, give it a watch. I am so impressed by what that little camera can do!

Note: All photos in this post, except when noted, were taken with my Canon PowerShot point and shoot and underwater housing, which came in handy when it started to rain! The video was shot with the GoPro HD Helmet Cam that we rented through the zipline company and which I’m now drooling over. 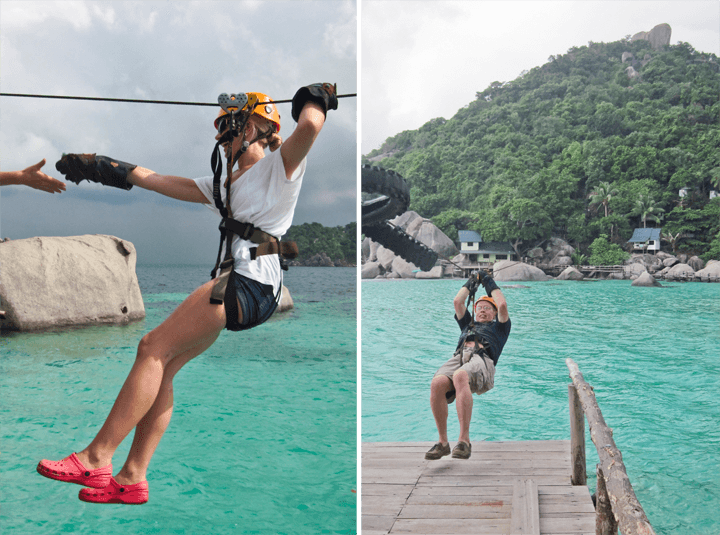 UPDATE: Sadly, the Koh Nang Yuan zipline is now closed. Learn how else to enjoy the island in my Complete Guide to Koh Nang Yuan!

Adventures Off The Strip: Helicoptering Over The Grand Canyon