Since I left home for my Great Escape, I’ve been doing monthly roundups of my adventures. As this blog is not just a resource for other travelers but also my own personal travel diary, I like to take some time to reflect on not just what I did, but how I felt. I also like to remind myself of moments, incidents and random thoughts that never made it onto the blog! You can read my previous roundups here: Month 1, Month 2, Months 3 and 4, Month 5, Month 6, Month 7, Months 8 and 9, Month 10, and Month 11.

I couldn’t have wrapped up the final month of my first year of full-time travel in a more dramatic way — with both a totally new country and an unexpected flee for home.

First, I fell madly in love with Laos. The trip was far too short and I moved much more quickly than I normally do, but something about that country got under my skin, in a good way. Then, things really came full circle when I spent the second half of the month home state of New York. I wasn’t expecting to do so but it was just what I needed after my big life change — sunshine, friends and family.

So, this is the month that I said goodbye to Asia and temporarily re-integrated myself back to life in New York. Forgive me for this mega-roundup — it was a roller coaster of highs and lows! 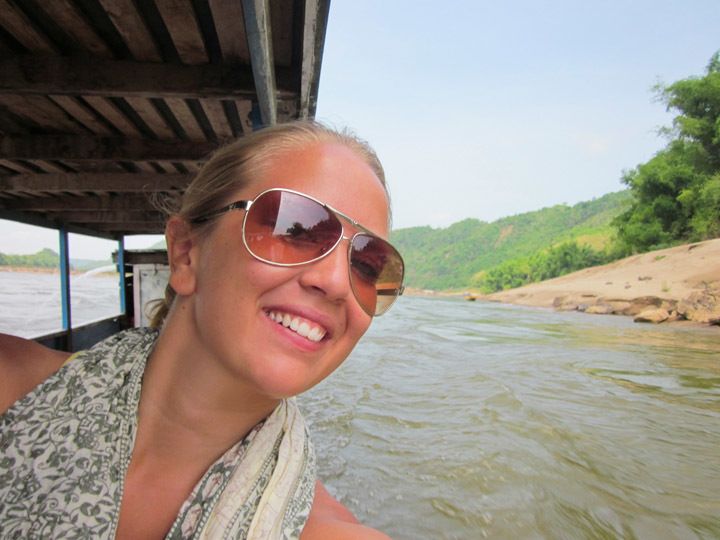 Laos… the country where I jumped off things

• Laos as a whole was truly a highlight of my travels. Luang Prabang was the most beautiful city I have ever encountered in Southeast Asia. In fact, it might sit alongside Santorini, Greece as one of the most charming places I’ve ever been, period.

• Traveling through Laos was like traveling back in time. En route to Vang Vieng, our bus was stopped for over  an hour due to construction on the road. The only road. We all stood around in the sweltering heat, watching while creaky prehistoric bulldozers moved piles off of dirt on the only route between Luang Prabang and Vientiane. I don’t know why, but I just got a kick out of being in a place where things like that happen.

• Say what you will about the so-called Banana Pancake Trail of backpackers in Southeast Asia, but… tubing was so much fun! A guilty pleasure indeed, but I’m glad to have ticked the box and bought the t-shirt and the mulberry mojitos and had a lot of laughs doing so. That being said, I’m so glad that I got to see a whole other side to Vang Vieng. Hot Air Ballooning over the countryside was probably one of my top adventures of the year, and a memory I will never forget.

• On the way to the Buddha Park in Vientiane I had one of those funny “Isn’t travel amazing?” moments. After a long drive we were starving and stopped at a typical roadside shack. We sat down at a table and were each handed a bowl of soup and offered shots of Lao Lao whiskey while chickens ran under our feet. The music was loud and the mood was jovial, and we all noted that the little restaurant was packed with locals, with whom we shared no common language but many smiles. They offered us more and more shots and soup refills, but eventually we had to get going. As we got up to leave and pay we were met by shaking heads and laughter. Suddenly it dawned on us — we hadn’t been eating at a restaurant, we had been warmly-welcomed party crashers at a private gathering. Whatever embarrassment I felt was quickly glossed over by warm fuzzies over the kindess of strangers and the hospitality of the Lao people. I wonder if I would be so kind to a bunch of confused, oblivious strangers in my own country. 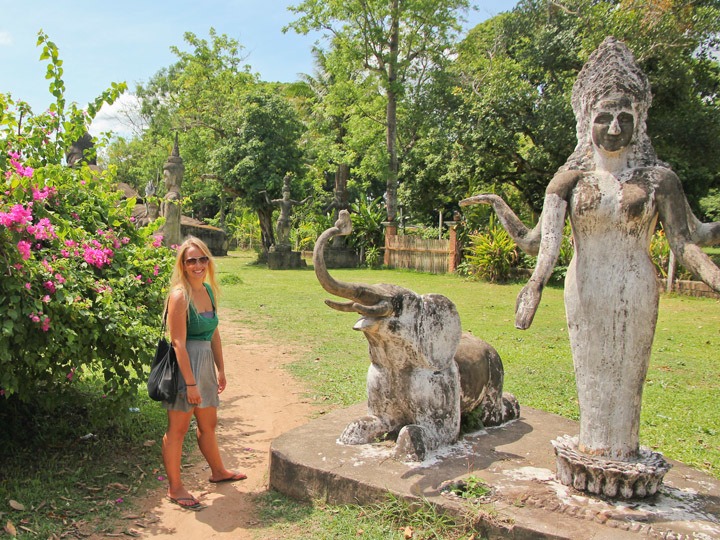 • Two moments stand out in my mind when I think of Laos — moments that were poignant and happy and sad and made me think about my life in a big-picture kind of way for reasons I can’t explain.

Moment Number One: The sun has set in Vang Vieng and a new friend and I decide that while we are having a great time dancing at Why Not Bar, we want to go find some other mythical bar that he remembered from the year prior. We tip-toed tipsily over a riverbed, traipsed over a bridge and climbed over a fence only to find said bar totally abandoned, aside from three half-comatose stoners and an over enthusiastic DJ. We sit on a flat of wood over looking the river and sing our hearts out to So Sally Can Wait, roaring the lyrics out into the darkness. You ain’t ever gonna burn my heart out… Here I was with this person who was basically a stranger, but yet somehow we are bonded for life because he’ll always be the guy I sat in the middle of the Laos jungle with buckets of whiskey, singing some old Oasis song like our lives depended on it with. Travel friendships are so strange.

Moment Number Two: I’m lying in an open-air pavilion, having just spent the past hour coming in an out of the brutal Lao-style sauna. Finally I lay down for a massage. My trip to Laos is coming to an end and I feel like I’m drowning in confusion over my recent breakup and where my life is headed. Suddenly it starts to pour and I lay there listening to the droplets on the thatch-roof, feeling the calming effects of rain and five dollar massages and thinking how far I am from anywhere. I find myself thinking that if I can just string together a series of perfect moments, moments just like this — everything will be okay.

• So, I get that its kind of weird to list having a motorcycle stolen from you as a highlight. But the outcome was pretty damn amazing. And even without the dramatic conclusion, I would have been listing this as a high. Why? Because I stunned myself with my reaction. Compared to my near mental breakdown when I was wrongfully evicted, I was barely phased by the whole robbery thing. Maybe it’s because heartbreak is such an overwhelming sensation that its difficult to get worked up about anything else while you’re in the middle of it. Whatever the reason was, I’d like to replicate my cool-headedness for my next travel crisis, whatever it may be. Ya’ll know its coming.

• Okay, this was a mini victory: I really hate when I get off the train in Bangkok and all the tuk tuk drivers and cabbies come running at me screaming, KHAO SAN ROAD? And I have to sheepishly admit that yes, I am indeed headed to the backpacker ghetto. But for once I got to bamboozle them with a breezy Ha! No! Heading to Soi Sukhumvit, actually. To a SUPER FANCY hotel. Put that up your tuk tuk exhaust pipe and smoke it. It’s the little things. Oh, and I finally went to one of those fancy rooftop bars I’ve been wanting to go to all year. Basically my final weekend in Bangkok was a success.

• On this trip to and from Asia I realized that a 24 hour flight no longer fazes me. I barely blinked, and in fact I even looked forward to it. I was watching a whole season of Dexter on the way back to New York and when the flight attendant told me to power down all electronics I was like FIVE MORE MINUTES PLEASE.

• And then, suddenly, I was home. I know a lot of my readers felt that going home was admitting defeat and travel is the best medicine for a breakup and I shouldn’t let go of my dreams and blah blah blah. But for me? The best medicine was reflection filled runs with my dog, sleeping in my own bed, driving around in my car blasting “Wide Awake,” and other eerily relevant pop songs, and having many mojito-fueled dance parties with old friends. The adventures are far from over. But you know, my life kind of exploded in ways I’ll never be able to explain here. For a while I needed to make my home base… my home. It was good to be back. 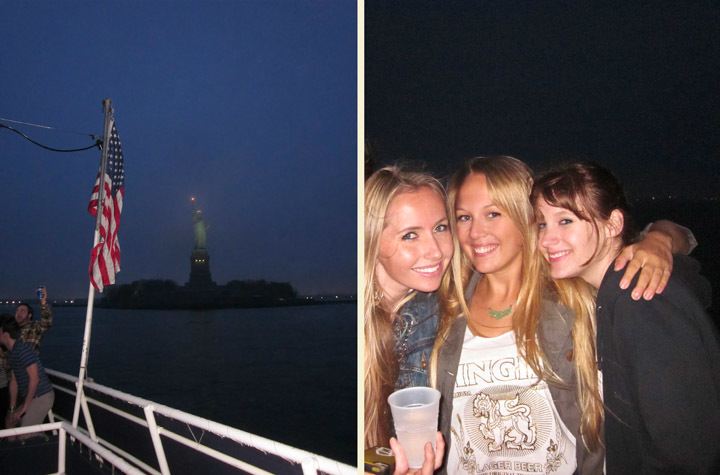 Made it in time for bestie Zoe’s booze cruise birthday!

• The most poignant lowlight of this month was observing the fairly disgusting tourist behavior at the Tak Bat ceremony in Luang Prabang. It stirred up a lot of questions about the dark side of tourism in a developing country. I then went on to tale part in some questionable behavior myself while tubing in Vang Vieng, which brought up some guilt and moral dilemmas.

• So, it doesn’t really feel like a lowlight in the end, but I did have a motorcycle stolen in Laos! On that note, I also almost died in a cave. However, both of those are now pretty funny stories rather than things that will haunt me.

• In general my trip to Laos was too short and too fast! At the time my first priority was spending time with friends since I was still dreading/easing into the whole solo travel things. So I rushed through Luang Prabang to meet my friend Suze in Vang Vieng and then rushed through Vientiane to meet my friend Kat in Bangkok. I definitely made the right choices at the time but I’m going to have to go back someday and travel at my usual sloth-like pace.

• I got so, so sick in Vientiane. Do you ever want to feel really, REALLY sorry for yourself post-breakup? Go traveling alone, check into a dark, damp hotel, and contract food poisoning. There is no loneliness like realizing you have no one in the whole country to call for help when you’re too sick to even walk to the pharmacy.

• I was conflicted to leave Asia. I knew I had to, but I didn’t want to. I mourn each chapter and volume in my life as it comes to a close, and this was one I was not ready for the end of. But I’ll be back.

• On a lighter note, reintegration was somewhat hilarious at times — I found myself throwing toilet paper in the bin, flinching at people drinking water out of the tap, stating “hello!” instead of saying “excuse me” to get a waitress’s attention, eating my food the moment it came out rather than waiting for others’ meals to come. It was strange to feel like a stranger at home! 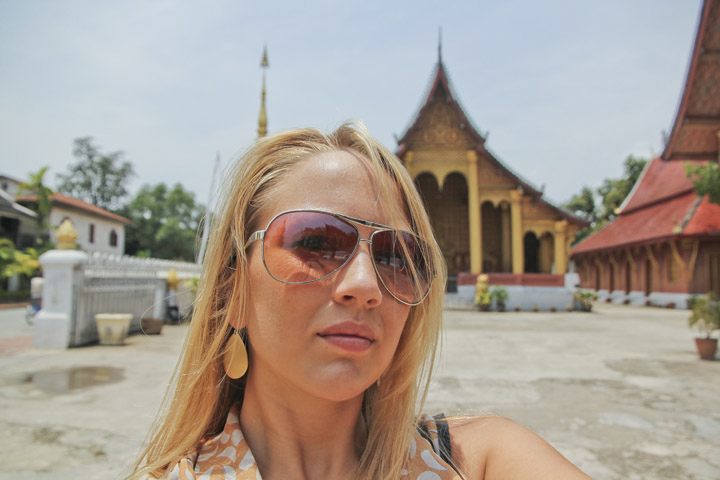 I realize that this whole category has become somewhat irrelevant now that I don’t track my spending by the dollar like I used to. But on the whole I was wildly impressed with how cheap travel in Laos was! Also, I scored the deal of the century this month, purchasing a $330 one way ticket from Bangkok to New York. Too bad I headed home early and didn’t get to use it…. BUT STILL.

I kicked off year two of my travels with a five-week globe hop that took me to three countries and eight destinations! Stay tuned… 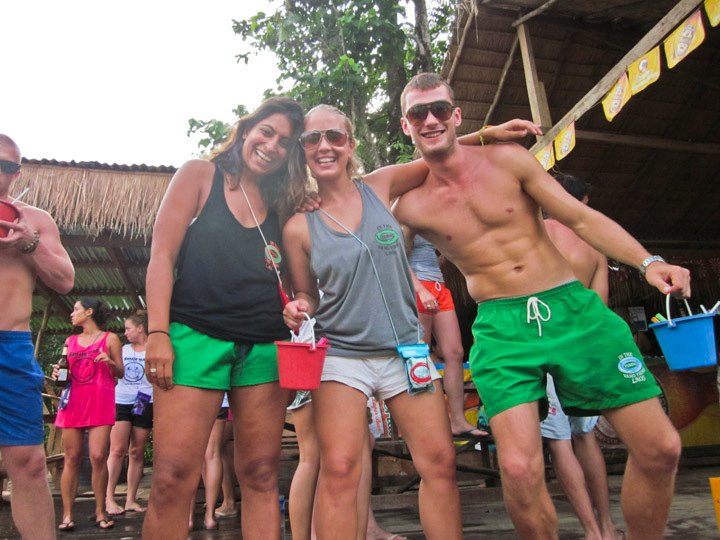 A Tale of Two Thai Cities

A Summer Tour of Albany All Kinds of Love: A Philadelphia Wedding
23 Comments...