The Saga of the Stolen Motorcycle Part II

If you have yet to read Part I of my own personal Motorcycle Diaries, in which I describe how I became a victim of rental motorcycle theft, start here. It’s a doozy. Part II picks up a few days later, at which time my passport and I were safely ensconced back in Thailand. I’m sitting by the pool in Bangkok when I get a phone call recounting the most insane story I have ever heard in my life.

I will now try my best to retell it to you in the best detail possible given its third-hand status. Luckily, there was also a photographer on hand to capture the days events:

After I had left for Bangkok, Chris was on his own in Vientiane. He went to the police station and filed an official report of the theft, and then waited around for his visa to come through.

On his final day in Laos, Chris took a rental bicycle (he was really over the whole motorcycle thing at that point) and rode out to the Thai embassy to pick up his freshly visa-ed passport. Bored and with time to kill before the same 3pm train to Bangkok that I had taken a few days earlier, he rode aimlessly around the outskirts of Vientiane. Of course he couldn’t help but sneak a longing glance at each and every red motorcycle that zoomed by. Down a few more back alleys and side streets he rode. Just as it was sinking in how very well and truly lost he was, Chris’s heart nearly leapt out of his chest.

The stolen bike was right in front of him, parked outside a hole-in-the-wall local restaurant. 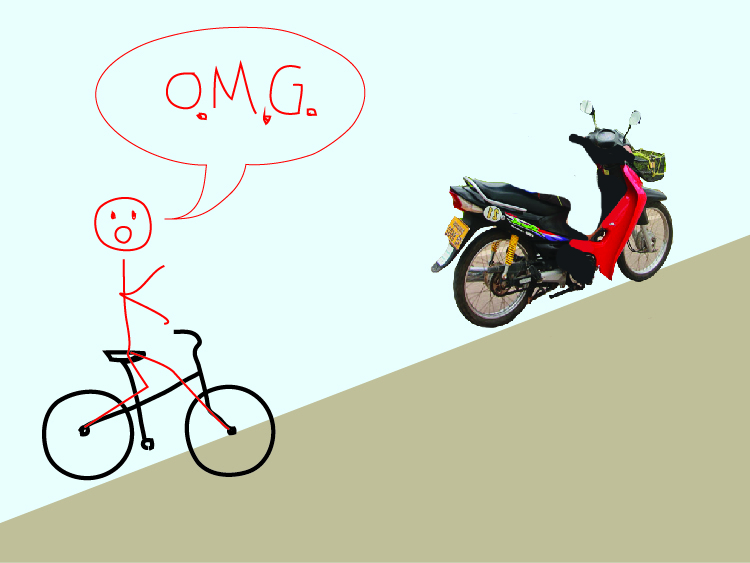 Holy shit! In a city of a quarter of a million people, the capital of the country, he had cycled down a random street and found the very bike that had been ripped off him a few days before.  It was beaten up, having obviously been transported on the back of a pick-up truck, and someone had done a number on it trying to remove the decals and identifying stickers. Also, the ignition looked like it had been basically shredded when the thieves attempted to start it.

Of course, Chris’s first instinct was to call the police — but he had no phone. Okay, he’d ride back to town and bring them back to this exact spot — but he had not even an inkling of an idea where he was or how to lead anyone back to it. There was only one option, really — Chris would have to steal the motorcycle right back.

Luckily, as a hard-core traveler Chris was wearing his only sweatshirt for the third day in a row — and the keys to the bike were still in the pocket. He would have to leave the bicycle behind, but it was a calculated loss. Looking over his shoulder, waiting for someone to pop out of the shadows and attack, Chris jumped on and tried to start the bike. As I mentioned, the ignition had been nearly destroyed and anxious moments went by as Chris fussed with the keys and waited for the familiar sound of a revving engine.

Finally! The engine roared to life. In that exact moment, an angry ladyboy came bursting out of the restaurant, screaming in Laotian and running down the steps. In what Chris described as the most adrenaline-fueled moment of his life, he peeled off down the street, chased the whole way. He drove and drove and drove until he could not longer feel his heart in his throat and he could be sure he was no longer in danger. Oh my God — the stolen motorbike has now been reclaimed. 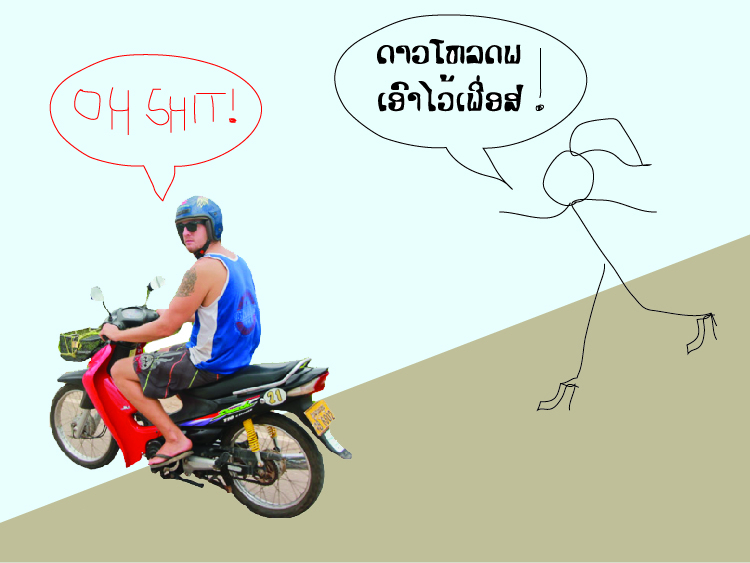 After a while Chris was able to find his way to the city center and back to the bike shop. He told the story to the shocked owner and then asked him with fingers crossed for luck if he would buy the bike back. The owner said he’d love to — except it was still filed as stolen with the police. So, with time counting down until his train out of the country left, Chris sped over to the police and updated them on the situation, filing a new report so that the bike could be sold back to the shop. Side note: I love a country where you can steal back something that was stolen from you and then report it to the police and receive a congratulations. I’m sure Bernie Madoff’s victims would have loved it if things had played out like that for them.

Back at the shop, the owner agreed to give half of our money back. It was a pretty fair deal — the motorbike would need a new ignition and paint job, and one bicycle had been sacrificed in the process. Chris made it to his train with moments to spare, concluding the saga of the most dramatic thing that has ever happened ever in the history of the world. 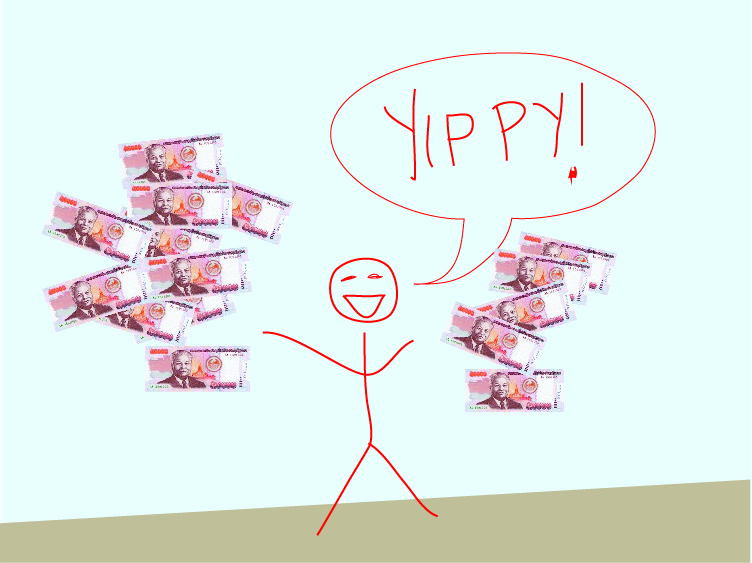 It’s hard for me to imagine how we ever got so lucky: That Chris happened to go down that street, that he happened to still have the keys in his pocket, and that he managed to escape the wrath of the angry ladyboy thief. Perhaps it was a cosmic reward for how zen-ed out I was about the situation in the first place. Perhaps the universe was giving us some kudos for doing the right thing and not trying to skip town after the bike was stolen. Or maybe when you live a crazy life, crazy things tend to happen to you. But reasons aside, even at the conclusion of Part I of this story I was feeling pretty great about life; after this installment I thought I won the lottery. Basically, I paid $125 for the best dinner party story ever.

If I ever say my life is boring, please slap me.

The Sights of Luang Prabang

The Saga of the Stolen Motorcycle Goodbye Asia: Going Out With A Bang
35 Comments...