I did almost no research ahead of time for my trip to Laos. So imagine my delight when I learned that there was an attraction so new that it had yet to hit the guidebooks: hot air ballooning over Vang Vieng. Is there a more romantic way to explore a place than by floating thousands of feet high in the air above it? 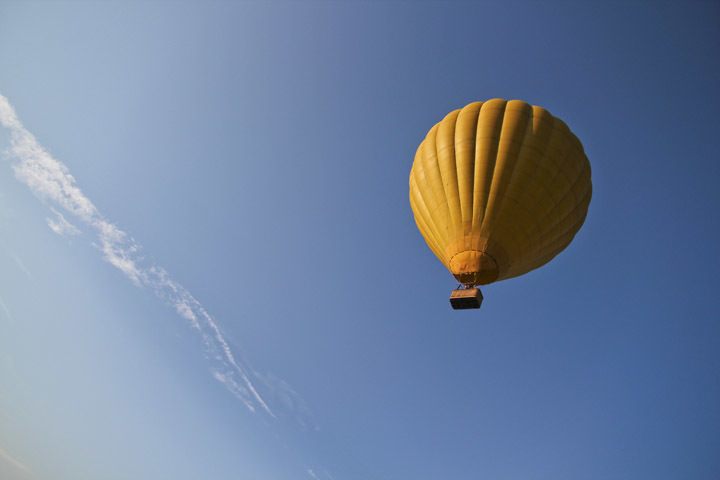 Balloons over Vang Vieng offers this experience at the bargain price of $70USD per person. While my trip was a gift from a friend I would have happily paid that price — it’s almost a third of what most operators around the world charge. Flights depart at 7:00am, 7:40am, and 4:30pm. As you might be able to tell from my I Hate My Alarm Face below, I went on the 7:00am departure. 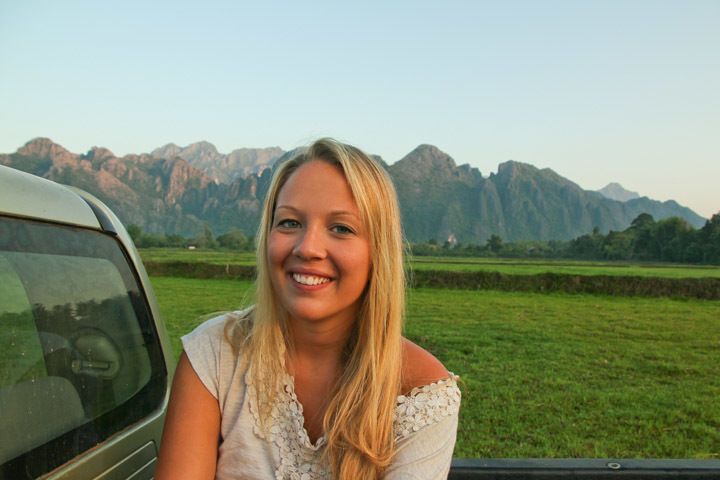 Watching the balloon being blown up was fascinating and definitely reason alone to go on the first flight of the day — never mind getting to watch the sunrise over the famous Vang Vieng limestone karsts! But the set-up was quite the production as well as a reminder that I was taking part in a fairly adventurous activity, considering Southeast Asia’s motto: Safety Seventh! It may not be an official motto considering I am the only one using it, but trust me — it applies.

Seven or so of us shoved our way into the tiny basket and laughed nervously as the burner burst to life with flames. We adjusted to the heat of the fire as it lifted us slowly but surely away from land and towards the sunrise. 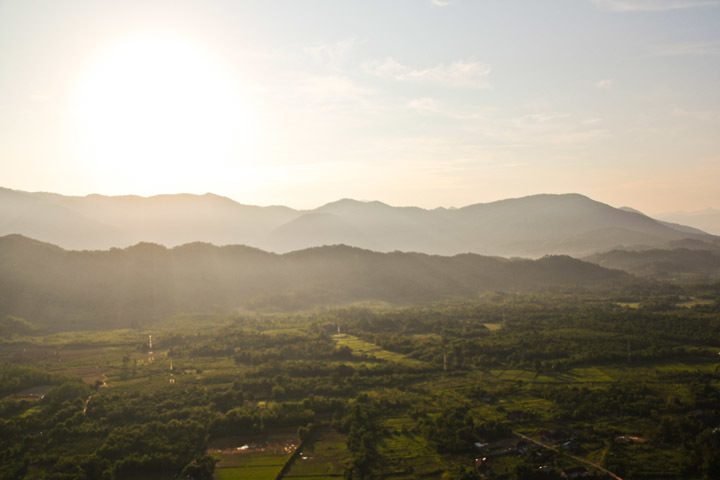 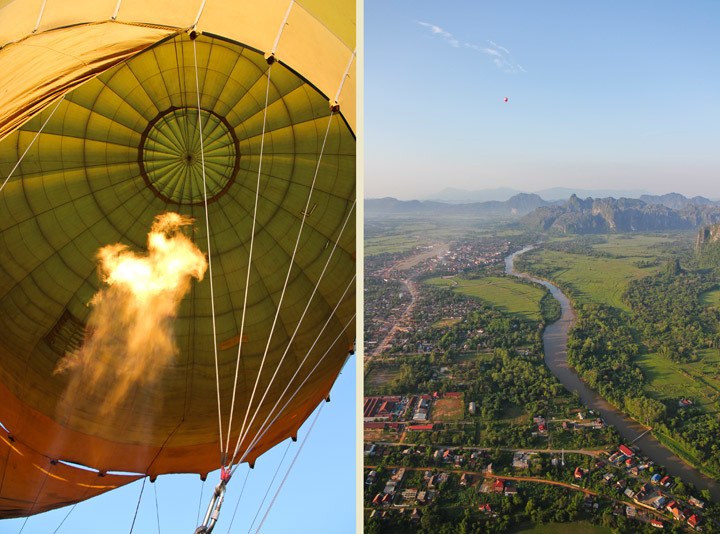 As we crawled higher we gained a completely unique perspective over the limestone mountains that Laos is known for. They push up harshly out of an otherwise flat valley, rough angles pushing upwards towards the clouds. 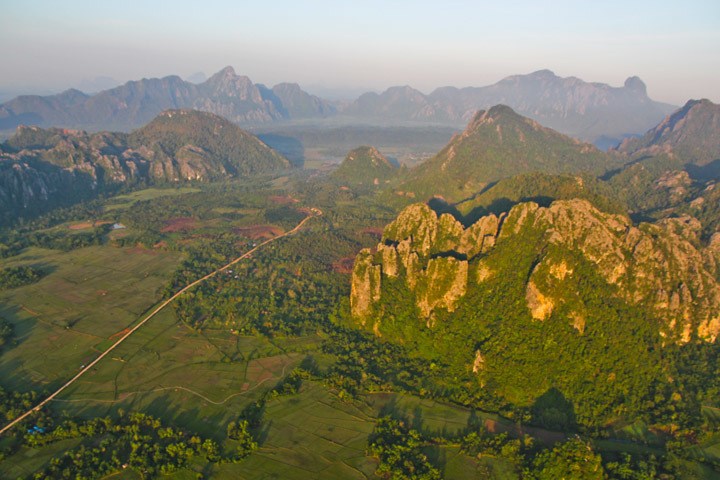 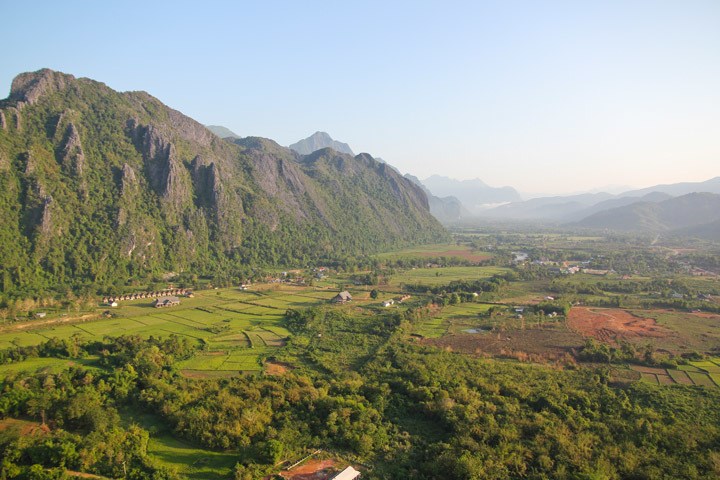 And at their feet lies the small town of Vang Vieng, population 33,000. Vang Vieng might not be much to look at while at eye level, but from above the collection of candy colored roofs looks almost quaint. 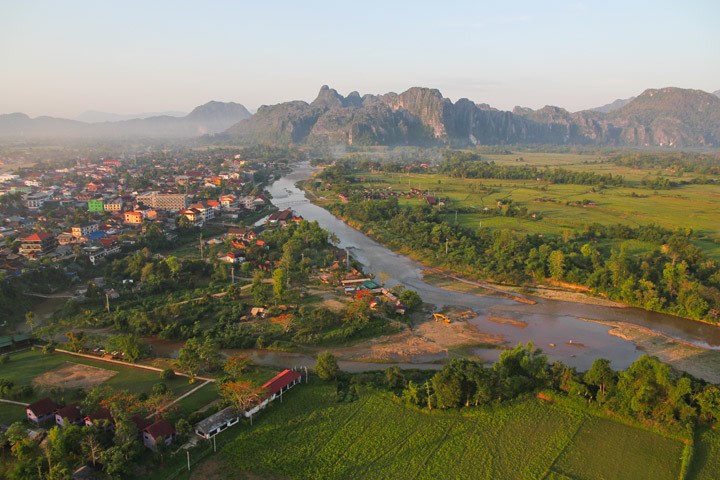 And of course, running through it all is the infamous Nam Song River, a portion of which is Ground Zero to tubing tourism. 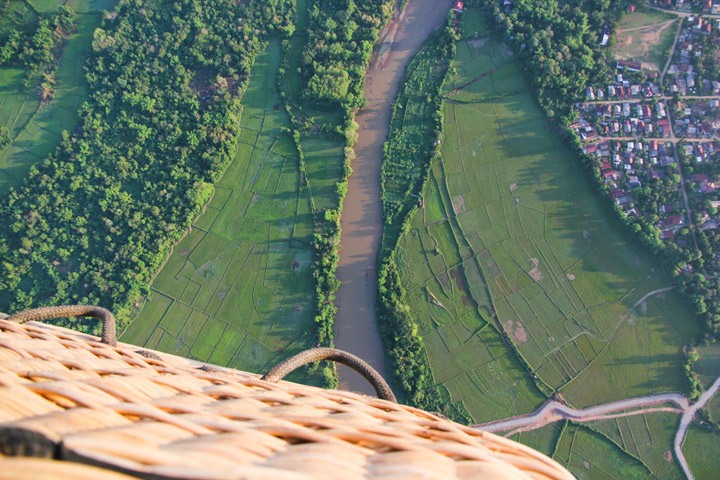 But none of that insanity is visible from up in the clouds. Up there it’s all mountain, rivers and rice paddies. 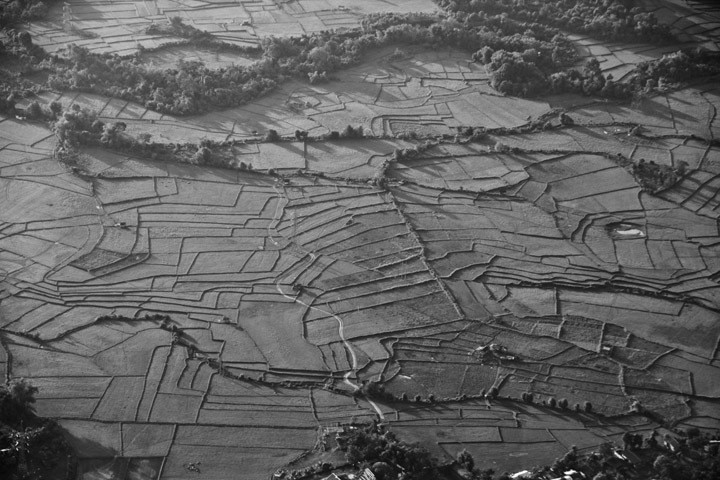 I watched in awe as a tiny machine clipped to the side of the balloon recorded our height climbing up to 900 meters, or 3000 feet! I don’t have any deep fear of heights but reading that number and having zero grasp of the science behind how we were being suspended so very high above the ground was a pretty exhilarating feeling. 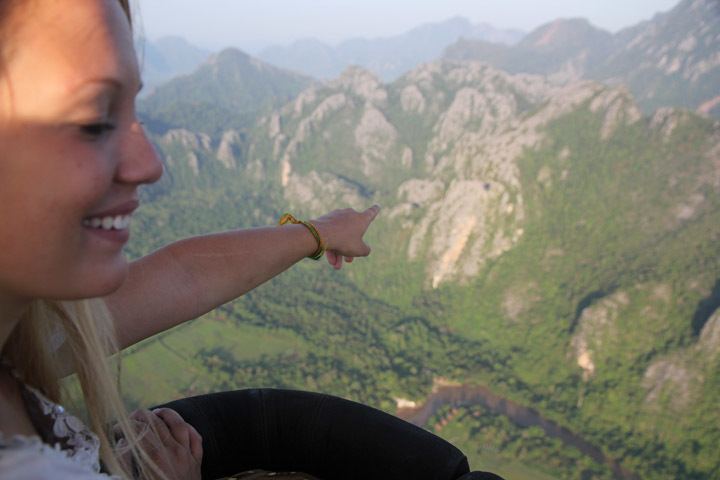 what happens when you hand a DSLR to someone else: fuzzy photos

Although the rides last a full forty minutes, it seemed like only seconds before we were descending back to Earth again. 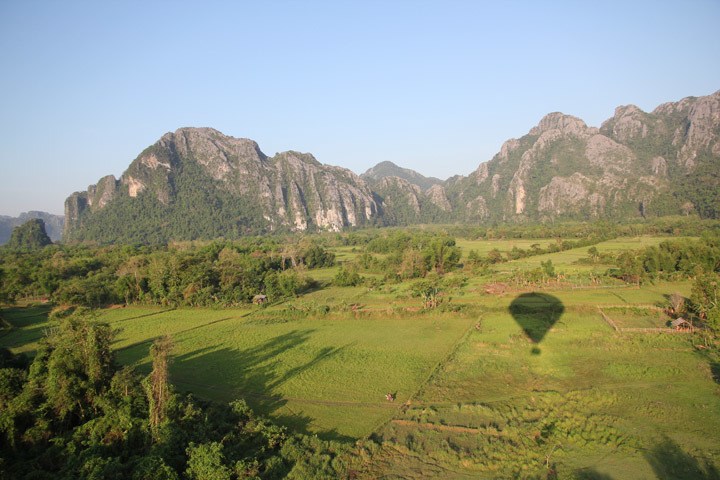 I was absolutely kicking myself the entire time for bringing the wrong memory card and being unable to shoot video, but the feeling was at its worst as we brushed slowly and calmly though the treetops. I can’t think of a more cinematic moment in my life. 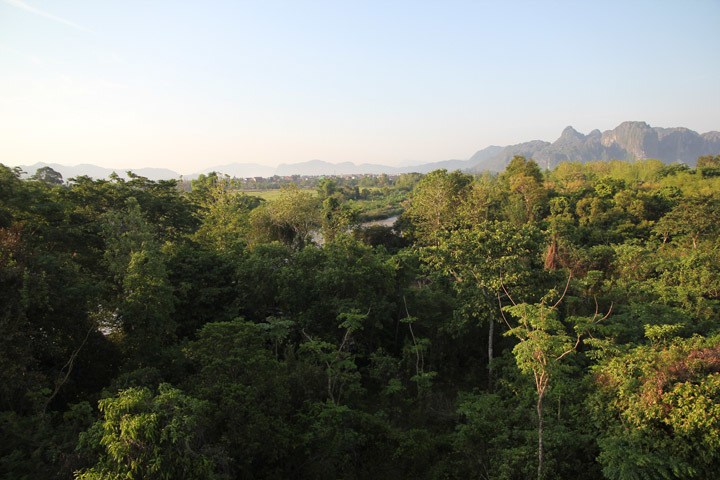 We steered close along the river, trying to come to a slow and controlled landing. 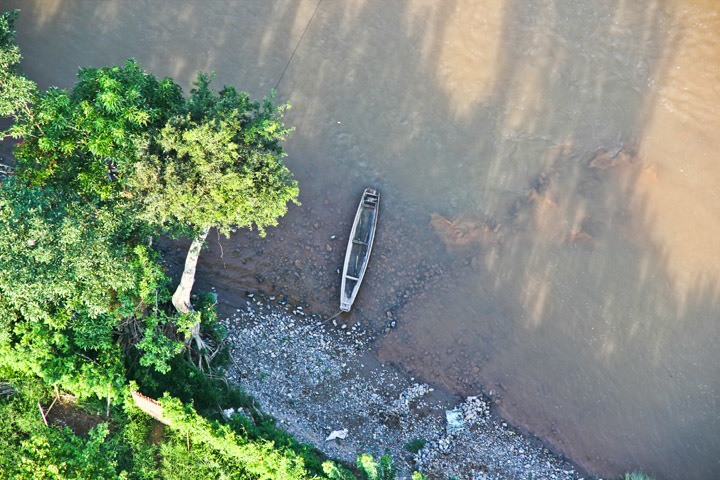 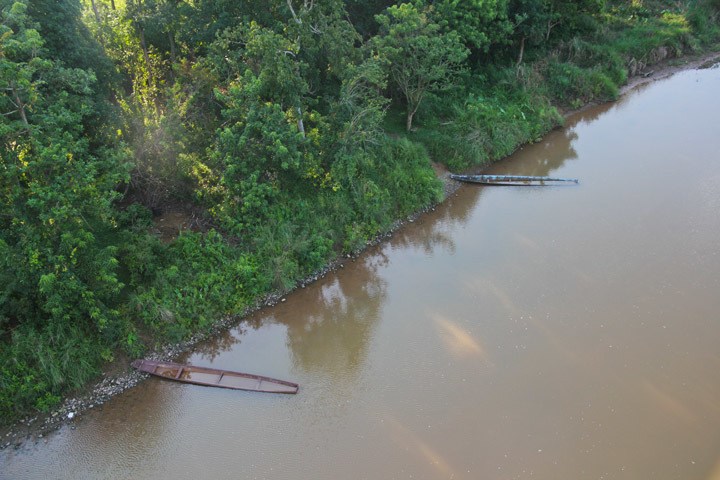 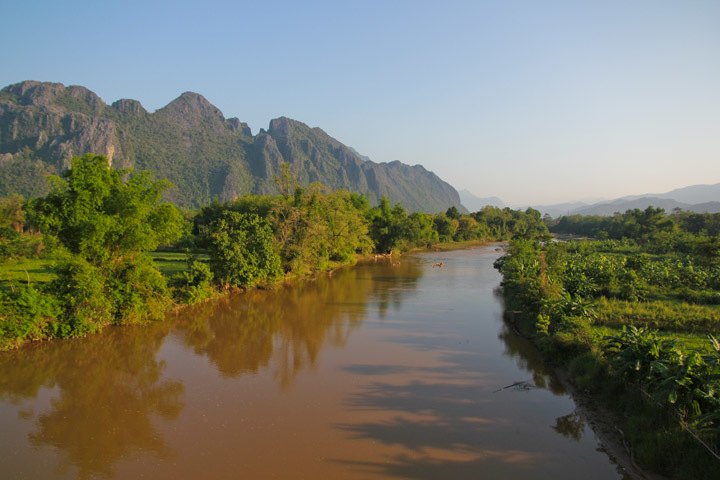 Of course, the landing is always the most dramatic part of hot air ballooning. We were passing along the river for so long I thought that surely we were going to drop down into it, when suddenly we made whip-lash inducing contact with the riverbank. We bumped and dragged and stumbled along for a bit until we came to an anti-climactic pause. 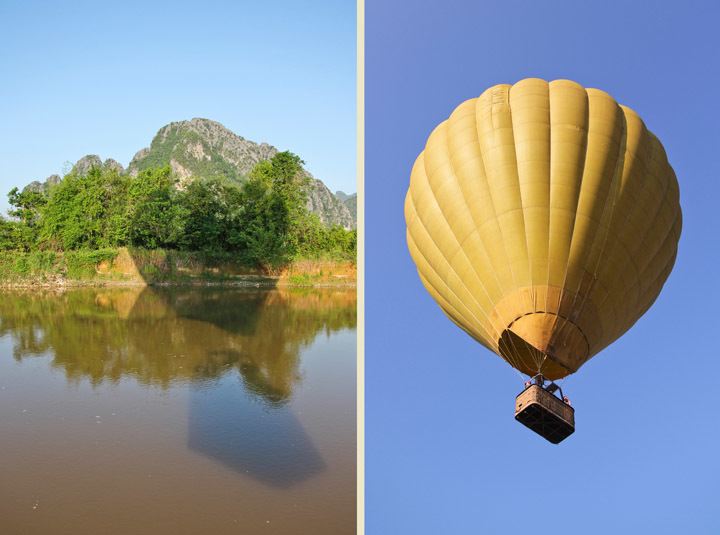 Unless you count a quick journey up in a tethered balloon over Angkor Wat, this was my first real experience hot air ballooning. It was one of the highlights of my trip to Laos! Between this and the caves and lagoon that I featured previously, I think it’s clear that Vang Vieng is a worthwhile stop for anyone passing through Laos, regardless of their desire to spend the day at a riverside rave. 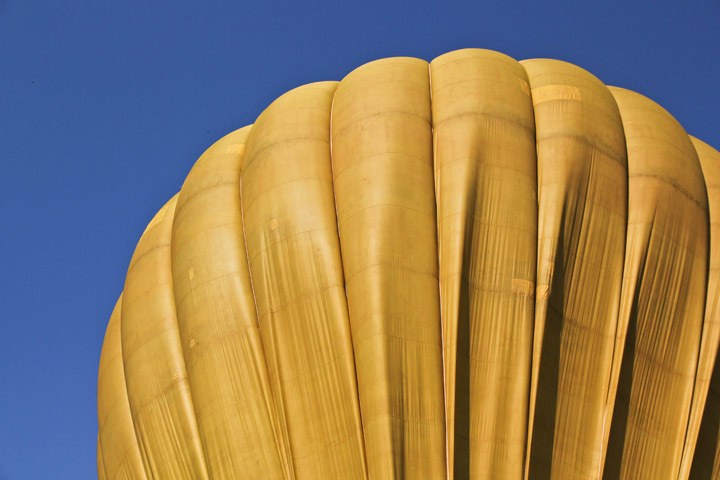 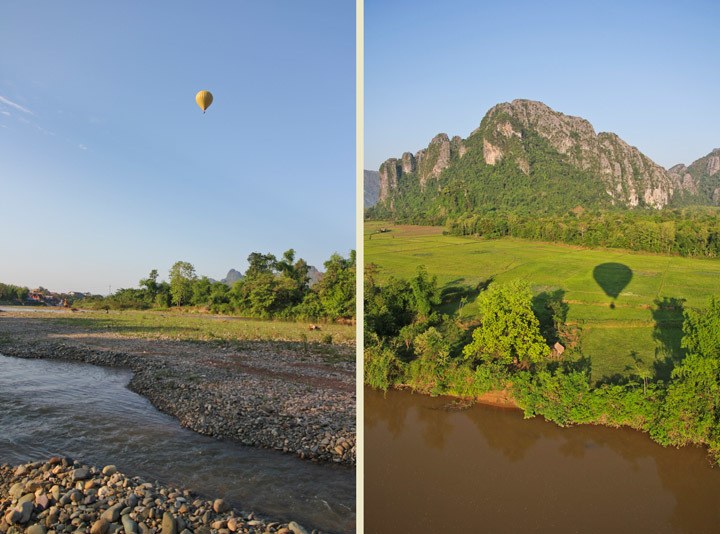 As we drove back towards our guesthouses and watched the second flight of the day pass overhead, I couldn’t help but think that there was no better start to a day than this. 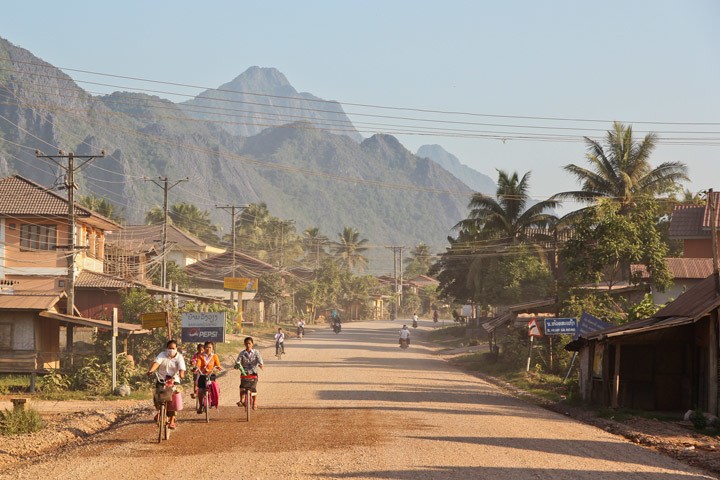 Flying Through The Palm Trees: Trapeze Lessons on Koh Tao

Beyond the Tubing in Vang Vieng Photo of the Week 58
39 Comments...