Goodbye Asia: Going Out With A Bang

How did this budget backpacker end up living like a queen for her final weekend in Bangkok? It involves some hastily won frequent flyer miles, a luxury hotel, and a night of The Hangover Part II-style antics.

Way back in March I attended The New York Times Travel Show and squeezed into a seminar by The Points Guy, Brian Kelley. In an epic stroke of good luck and speedy Tweeting skills, I won 10,000 AMEX points! 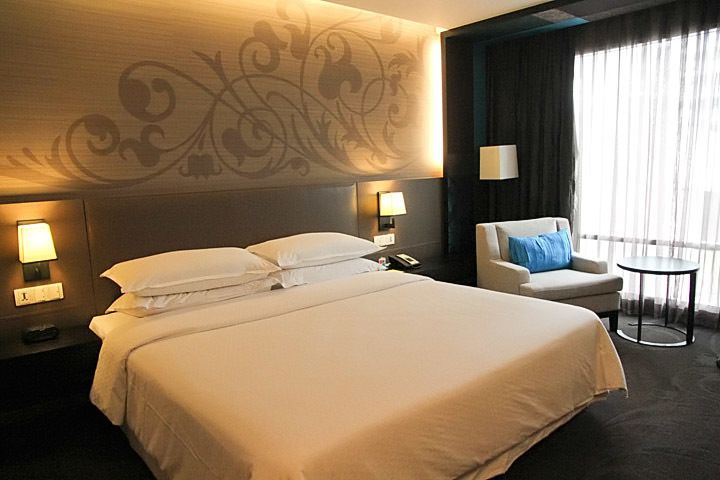 I quickly transferred them into Starwood Rewards Points, and started dreaming off all the beautiful Southeast Asia hotel properties I could stay in. I settled on a romantic weekend at the super-chic Le Meridian Chiang Rai, and was practically salivating in anticipating of high thread count sheets, dreamy midnight swims, and… air conditioning (my travel standards are pretty low). Unfortunately that whole breakup thing happened, and I was no longer in the position for a romantic getaway. So I vowed to go to the Le Meridian Chiang Mai someday in the future to live out my artificially cooled-air dreams, and instead I planned a girlfriend getaway to Bangkok.

Thus, a few days before I flew back to New York and my bestie Kat flew to London, we met up at the trendy Four Points Bangkok for a weekend of the finer things in life. 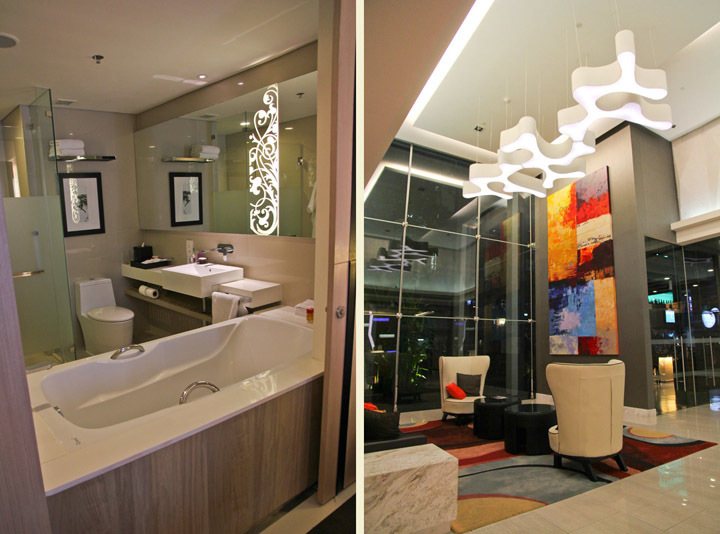 A hot tub in the room, a pool on the roof, fluffy white towels as far as the eye can see… guys, this is really living. My nights here convinced me it is time to start taking frequent flyer miles and rewards points a little more seriously. If you’d like to do the same, here are few bullet points from my notes at Brian’s seminar:

• Credit cards are the quickest way to earn miles, but you have to start with good credit.
• Most of those miles will come from sign up bonuses, but still make sure to know the spend requirements and don’t settle for one point per dollar!
• Look for transferable points. United miles are among the most valuable.
• Make your money work for you. Never go directly through a retailer’s website! Use sites like EV Reward to check bonus offers at specific retailers. Also check for airline and hotel credit card dining networks.
• When it comes time to book, use sites like Expert Flyer or Award Wallet to help you find reward seats.

Now, back to the fun stuff. Did I mention the pool on the roof? It might not be so attractive on a smoggy day… 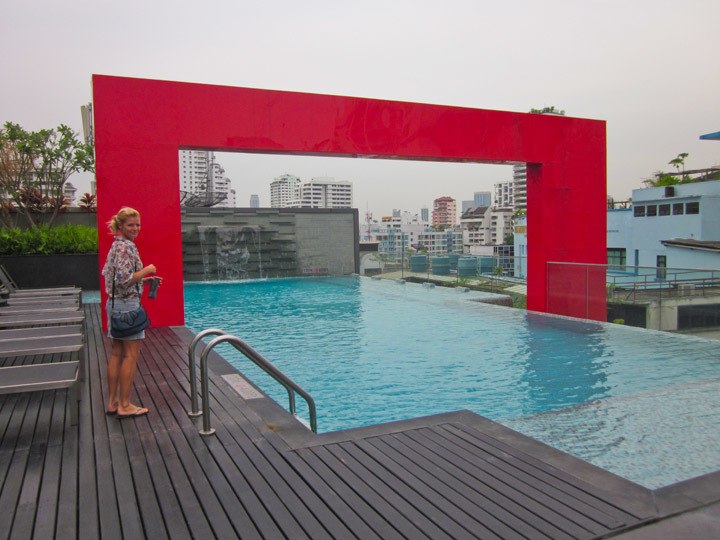 … but how about a beautiful night? It was amazing. Backpacking is fun and all, but I love me some occasional luxury. 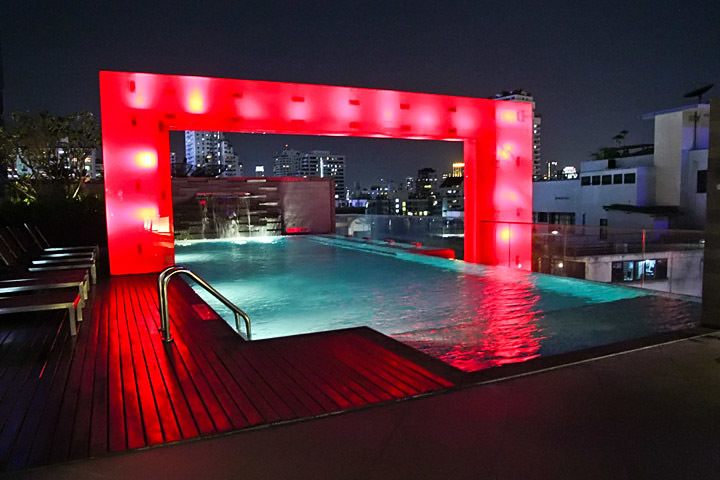 So how did this hotel stay turn my weekend into such a luxurious and debaucherous one? Well, it just wouldn’t do for a guest of a hotel with a rooftop pool to sling Chang beers down at Cheap Charlie’s, now would it? No, to keep up with our high style, Kat and I set off for one of Bangkok’s famous rooftbop bars. We couldn’t make it to the most famous of them all, Sky Bar, thanks to our lack of appropriate footwear. So we sidled up to Red Sky, which had a slightly more forgiving dress code. 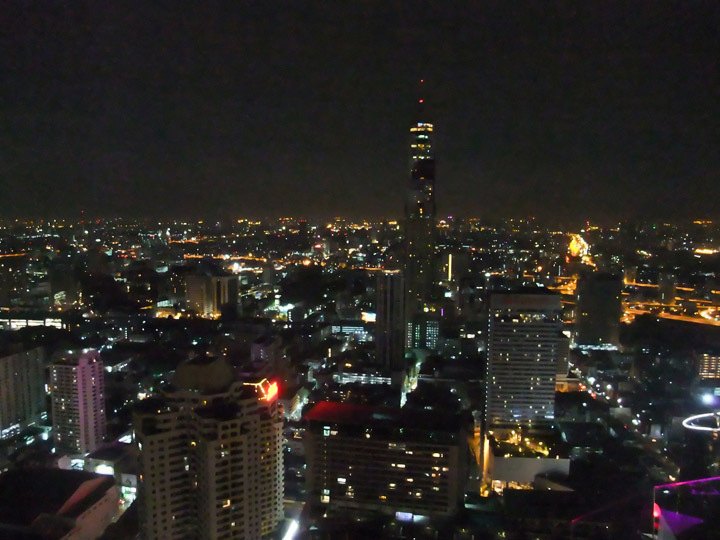 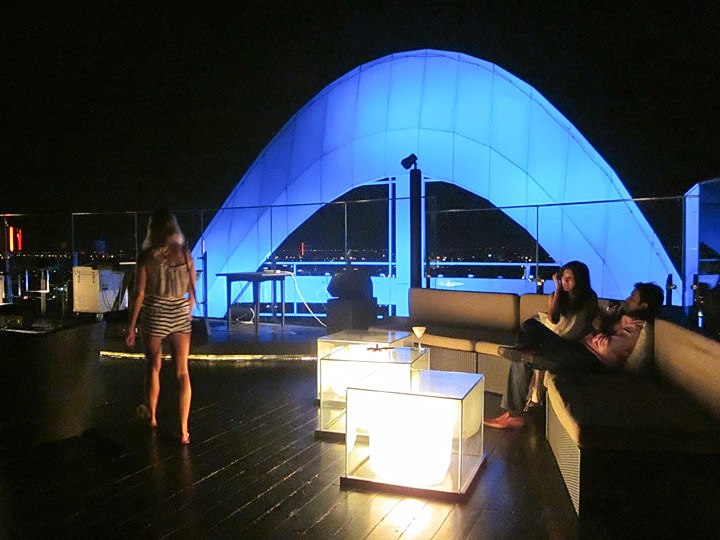 Located at the top of the Centara Grand, Red Sky features 360 degree views of Bangkok, live jazz music, and a drink menu so pricey you will swallow your gum. Perhaps not a place to hang out all night, but a great spot to have a kick-off toast to a fun evening out. 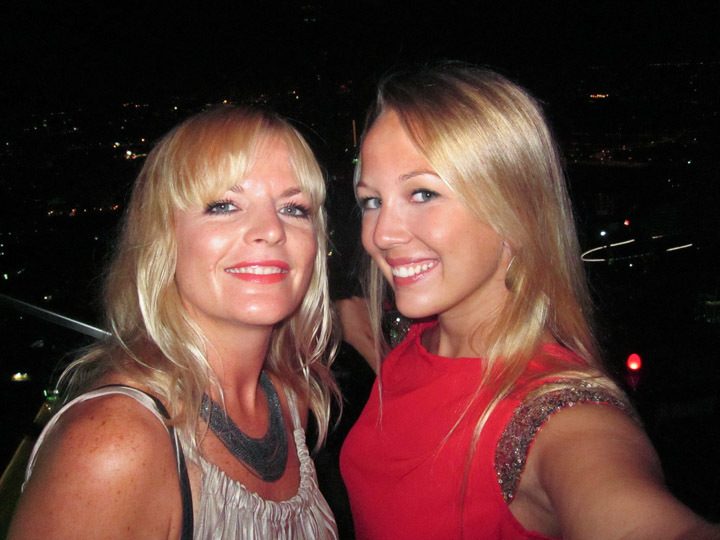 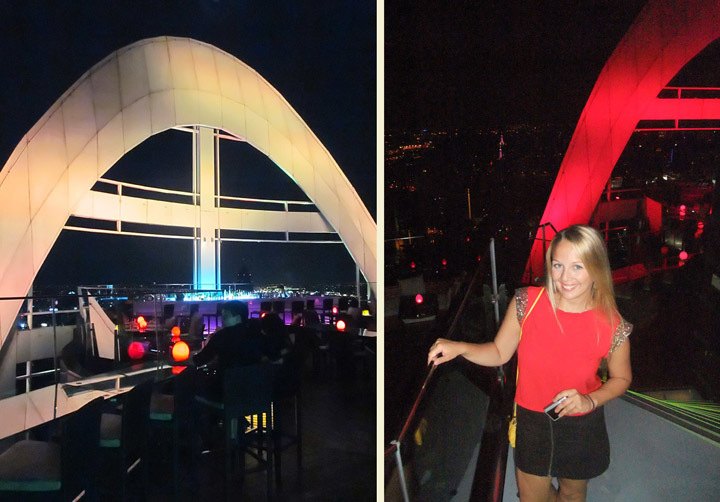 After an hour we called it quits. We weren’t ready to head back to our hotel but we also weren’t up to keep throwing back $35 champagne cocktails. So we set off for Sukhumvit Soi 11, the center of Bangkok’s trendy expat scene. We were hitting the various bars and having a grand time when we ran into another group of partying Koh Tao-ers! Such a small world… or rather, such a small Thailand expat scene.

It was all too early when the bars on Soi 11 gave a last call. Luckily our in-the-know friends had no intentions of calling it a night — and they knew just where to go. 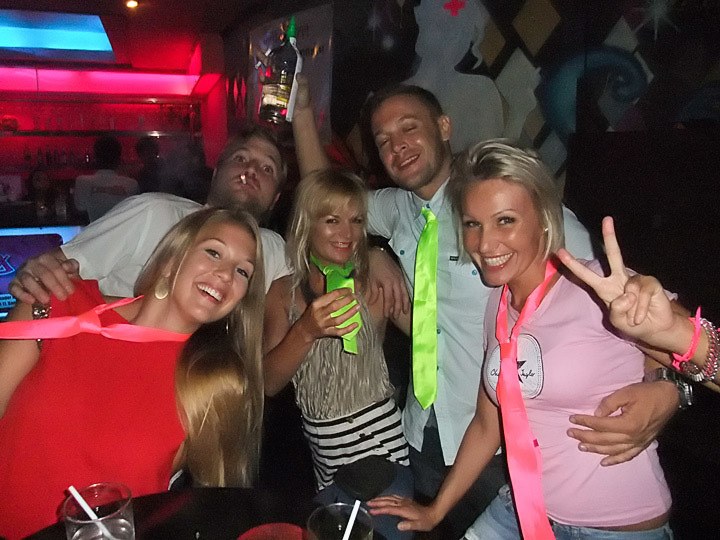 Let’s just say that I didn’t imagine a night that started in one of the classiest joints in Bangkok would end in an underground after-hours club named Climax. 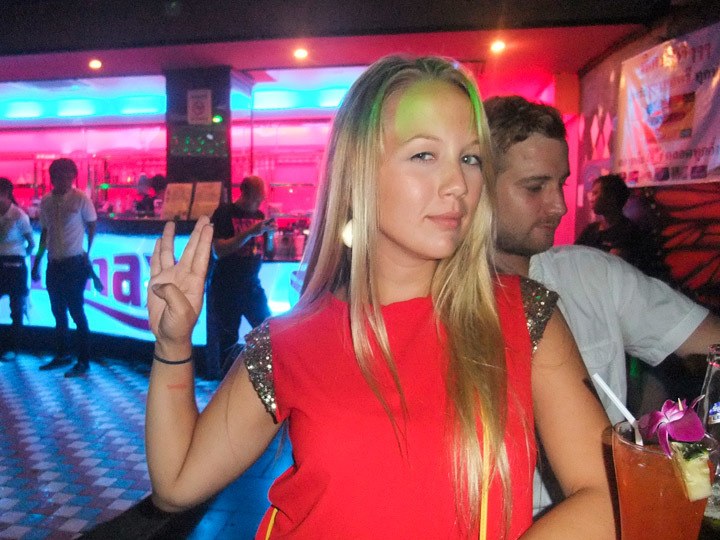 The best and worst thing about Thailand is that money can buy anything. On this night it was kind of a fun thing, as our purchase of bottle service meant the staff was more than willing to play along with our games that included (1) dressing up in our own complimentary versions of the staff’s neon ties and (2) impersonating the staff and reenacting bar fights. 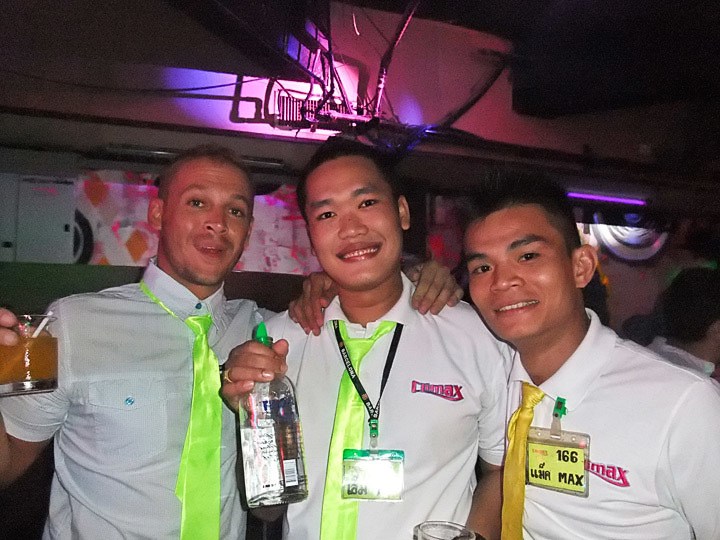 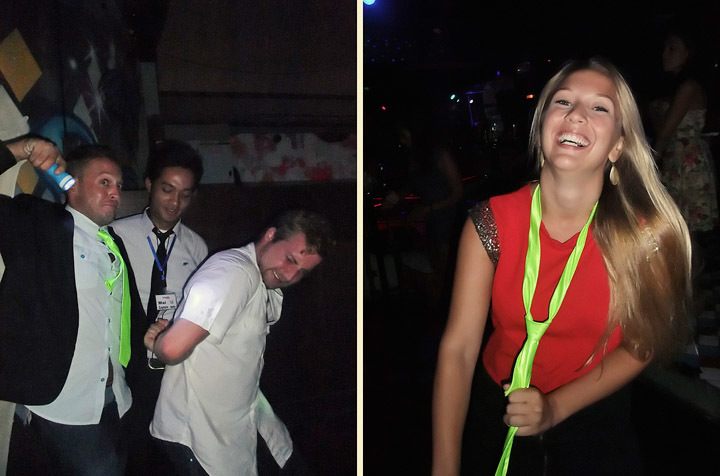 Somewhere around the hour when the sun was starting to come up, Kat showed off her great wisdom my insisting it was time to head to our hotel. But not before I ran into McDonald’s blurting orders for all kinds of Chic Sticks (a Thai version of the stateside Chicken Selects). Epic night indeed. 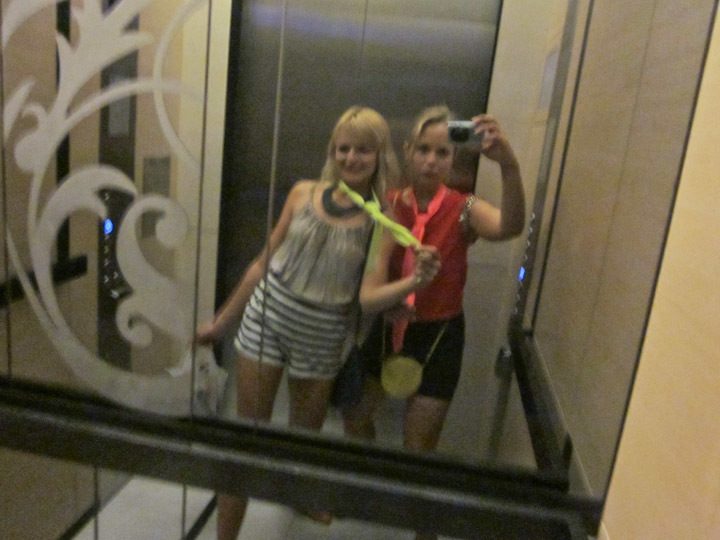 Kat and I’s final day together in Bangkok found us back where we belonged, in the backpacker ghetto that is Koh San Road. Kat commented that we must look too rich because the vendors were quoting us more than usual. I told her all our high-rolling was starting to sink in. 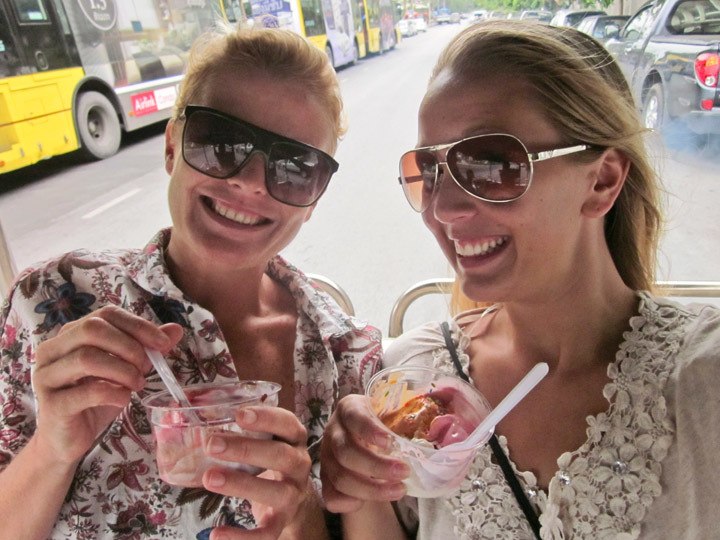 All too soon, I was boarding a plane back to New York. You can’t imagine my sadness at saying goodbye to Asia, a move I made in order to preserve my sanity but still sooner than I was ready for . I wrote this as I sat in a cab and watched the city go by blurred with tears:

After spending almost a year of my life with you I feel confident saying that I have loved you truly, madly, deeply. There have been too many people, places, and moments to even begin to mention. I’m not sure when my return date is but I know one thing for sure: this is not goodbye.

I can’t say it any better than that.

Binging on Blogging at TBEX’15 Bangkok

The Saga of the Stolen Motorcycle Part II Photo of the Week 60: Niagara Falls
25 Comments...