It had to happen sometime. At some point, my good travel luck had to run out. And boy, did it go out with a bang on my last day in Laos.

Long time readers might be all like, Alex, what about that time you almost forgot your passport? Or that time you were evicted from your apartment? Or the various times you’ve been injured or ill? Well, the passport thing was more like an averted crisis since all was well in the end, and the apartment situation was more expat bad luck. As for the injuries and illnesses I’ve mostly brought them upon myself, except I guess you have a point when it comes to that eye infection I contracted in Malaysia which culminated in painful eye surgery. Luck kind of failed me there. But it still doesn’t quite compare to the dramatic misfortune that fell upon me in Vientiane.

I woke up on my final morning in Laos feeling lazy. I had to get my passport back from the bike rental shop where two friends and I had rented two motorcycles to explore the countryside, and then I had to catch a train to Bangkok at 3pm. The rest of the day I planned to catch up on work.

The three of us met up and the boys volunteered to return the bikes. Two of us had been staying in a decent hotel while our friend Chris had stayed in a hostel a few blocks away. We made plans to meet back up for lunch. I lolled around for a few hours getting work done and then set off to the agreed upon restaurant.

The big smile I had on faded when I saw the ashen faces that were approaching me.

I remained impassive as my brain kicked into gear trying to find a way in which that statement was not true. My first hope was that the bike was moved by someone else (a common occurrence in Southeast Asia) and they simply could not find it. But the boys assured me that they had spent hours combing the streets. We walked over to Chris’s hostel and spoke to the owner, who told us she had been disturbed by a loud gang of ladyboys in front of the entrance the previous night.

It slowly sank in: one of our rental motorcycles had been stolen. Probably by a lady boy. 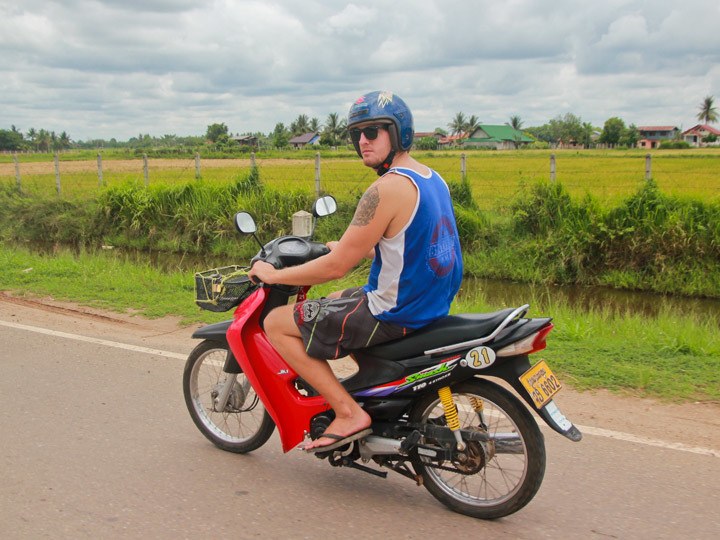 the bike, in happier times

We sat on the hot pavement of the sidewalk and I fished out the rental agreement, which we had obviously signed without reading. We started to regret that blind signing when we realized we were liable for ONE THOUSAND FIVE HUNDRED DOLLARS. Considering the percentage of my net worth that number makes up, I might as well have signed my life away in the fine print. And did I mention that mine was the passport being held as collateral?

In desperation, someone floated a plan into the air. That we go in and ask to keep the bikes for another day but trade the passport for someone else’s old driver’s license, claiming we needed the passport for a visa. Then skip town. While I could understand why one’s mind would go there considering the money at stake, I knew without hesitation I could never do it. First of all, the rental shop would have both the license and my passport information and I’m confident they would turn them over to the Vientiane police, at very least. You know, bad-ass as it may sound, I don’t have a strong desire to be stopped at the border by beat-cops or to have a criminal record with Interpol for motor vehicle theft.

Which brings me to my second point. Carrying out that plan would mean stealing from someone in a country where the average person makes just over a thousand dollars a year. We had been robbed, yes, but there was no reason to turn that into yet another crime.

You might think I’m pointing out the obvious. And yet throughout the day, as we waded through the whole nightmare, it was shocking how many people suggested we try to skip the country. Isn’t it cheaper to just leave your passport behind and get a new one in Bangkok? I heard it over and over.

Finally, we walked into the bike shop with our heads hung low. We recounted the story and what details we knew, and the man listened patiently. We asked if there was a chance the police would recover it and he confirmed our suspicion that chances were astronomically low of that happening. Then came the stomach-clenching moment — we asked how much we owed. He took out his record of the bike and scanned it calmly. “This is an old bike,” he said. “I will charge you nine hundred dollars.”

One one hand we were relieved — that was $600 less than we were legally obligated to pay. Still, all three of us have owned crappy bikes in Thailand, and we had always paid around $300. When we explained this, the man shrugged. “This is Laos,” he said, “not Thailand.” Still, the boys were skeptical. The man kindly lent the guys two bicycles and directed them to the bike district and told them that if they could find an equivalent bike for less, he was happy to take a replacement. They biked off while I remained behind, staring down the clock and trying to will 3 o’clock into coming a little later that day. I was no closer to having my passport and getting on my train. 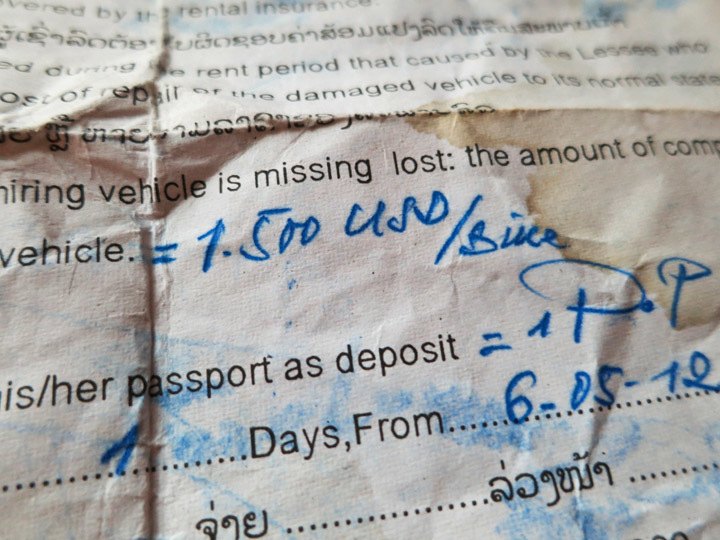 The boys returned unsuccessful — they reported with shock that crappy bikes in Laos really did run about three times the cost of crappy bikes in Thailand. We were out of options — time to pay up. Now, thus far in my mind I had already decided to give Chris $100 to offset the total. After all, even though we had stayed in two different parts of town, we had all decided to rent the bikes together. But when it came time for the three of us to talk details I realized that Chris definitely considered it a three-way cost, and things did get a bit tense. I won’t go into the details out of respect to the other two people’s privacy, but in the end, context is important — Chris is a good friend from Koh Tao, someone I’ve worked with, laughed with, partied with, and hope to continue that pattern in the future. Money comes and goes but friendship endures — once I realized that this would have a lasting impact on our friendships it made it easy to agree to split the cost three ways.

We made one last-ditch effort at negotiation, asking with extreme politeness if there was anything further the man could do for us. He made a call to a mysterious boss and wrote down $800 on a scrap of paper. Another hundred off.

We set off for the ATM.

Panic was starting to set in as I imagined missing my train, having to stay another night and book another ticket. At the ATM, we discovered we could each take out a maximum of 2,000,000 kip – or about $250 dollars.

I breathed a major sigh of relief when we walked back into the bike shop and the man accepted the cash we were able to withdraw — about $750. He had been so fair and kind throughout the whole experience, it made me even more grateful that we hadn’t followed everyone’s suggestion and tried to rip him off. After all, we had signed a document saying we owed $1,500, and here we were handing over half of that. 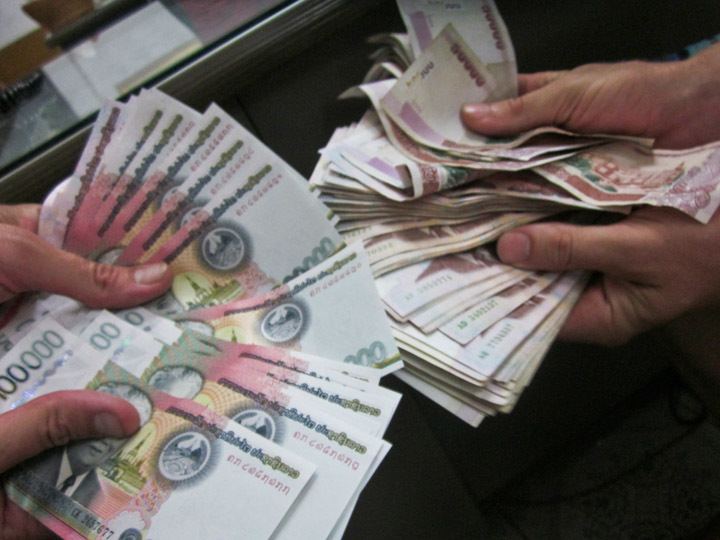 My heart palpitations were reaching dangerous levels as the man painstakingly filled out forms, made copies, and went through the motions of legally signing over the bike to us. I felt reassured by the paperwork and by how official it all seemed. Chris, who was staying behind for another two days to wait for a Thai visa, had already made plans to head to the police station and file a report that evening.

Finally, I was handed the most precious item in the world — my passport. I was now in possession of my personal identification, a handful of paperwork, and one-third legal ownership of a stolen motorcycle in Vientiane.

I literally ran back to my guesthouse where I made it in time for my shuttle with minutes to spare. I was in a dream-like state throughout the taxi ride, border crossing and second shuttle. Only when I was finally on the train did I begin to reflect.

If you’ve been reading for some time you may have noticed that I have some dramatic tendencies. So, had you told me something like this might happen to me someday I would have envisioned an aftermath of blind rage, distress over money and injustice, and many, many hot tears. And so no one was more surprised by my reaction than I was.

You know what? I just couldn’t get upset. I really tried — tried pinching my inmost thoughts, poking my subconscious. But I couldn’t rattle my zen-like composure. So, we had a motorcycle stolen. It cost me personally more than my rent in Thailand. And yet, no one was hurt, and no one took advantage of us. After all, we could have lost a motorcycle in a much more horrific way that would have ended with us all being med-evaced to Bangkok. And no one had ripped us off — the bike shop was more than reasonable. Well, I guess whoever stole the bike ripped us off. But hey — that’s just the rare Bad Luck Tax.

When I put my life on a scale of luck, putting the good on one side and the bad on the other, measuring for all the wonderful or horrible things that I had no control over — I still come out way on top. My traveling life has brimmed with good fortune — I’ve been in the right places at the right times, I’ve been handed fantastic opportunities and I’ve made amazing friends who have changed my life for the better. I have traveled the world and thus far have remained relatively unscathed when it comes to matters of assault, theft, injury and illness (minus that whole eye thing, of course). I could have looked at this situation as a horrible injustice or a tragic loss of funds, but instead I just looked at it as an example of the occasional Bad Luck Tax I pay for the privilege of being able to travel this magnificent Earth.

I drifted off to sleep that night listening to the train shoot down the tracks and realized that for the first time in a long time, my mind was completely clear. Even at the end of a day like that, I was still a lucky girl.

While I didn’t know it at the time, the Vientiane Motorbike Saga was far from over! Check back tomorrow for the dramatic Part II to this story!

Photo of the Week 59 The Saga of the Stolen Motorcycle Part II
21 Comments...