After four days of hardcore diving and internet disconnect, what does this girl need? A highland retreat in which to dry out and catch up on work.

Boquete was the next natural step on our Panama itinerary, the perfect link between the two coasts we were hitting up. It’s also, strangely, a hotspot for American expats thanks to the AARP naming it a top retirement hotspot in 2010. Noticeable signs of a geriatric American invasion aside, Boquete reminded me of other cool-aired, tourist-friendly mountain towns I’ve visited throughout my tropical travels — Dalat in Vietnam and Banos in Ecuador both come to mind. Though most backpackers we met warned us we’d be bored after a few nights, we spent six low-key days here, exploring the area in short spurts between long periods of laptop time.

Our time in Boquete was mostly super chill and consisted of long workdays, afternoon jogs, meeting up with some expats we’d met in Panama City, and watching the Super Bowl. However, none of those things make for a very scintillating blog post.

Luckily we did some interesting things. One of my must-dos was horseback riding. I had been trying to get in a saddle since arriving in Latin America, but the opportunity has alluded me. After being deposited at a ranch on the outskirts of town, we met up with our two fellow riders for the day, a young couple from California who had recently relocated to Panama City. Between us we spoke a decent amount of Spanish, which was handy as our guide didn’t speak a word English — but hey, what do you expect for thirty-five bucks? He wordlessly matched us up with our rides and off we went. 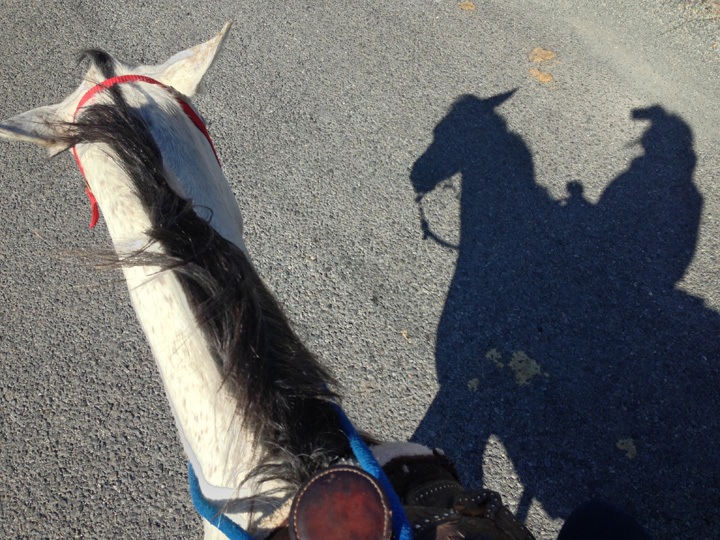 It was Ander’s first time on a horse and I laughed as he quickly fell far behind the group. “I don’t want to hurt it!” he called back when I told him to give his horse a little nudge of encouragement. Finally he gave a gentle tap of the heel and I watched with a mix or horror and amusement as his horse took off in a full canter towards us.

It was our first hint that these were some wild horses. 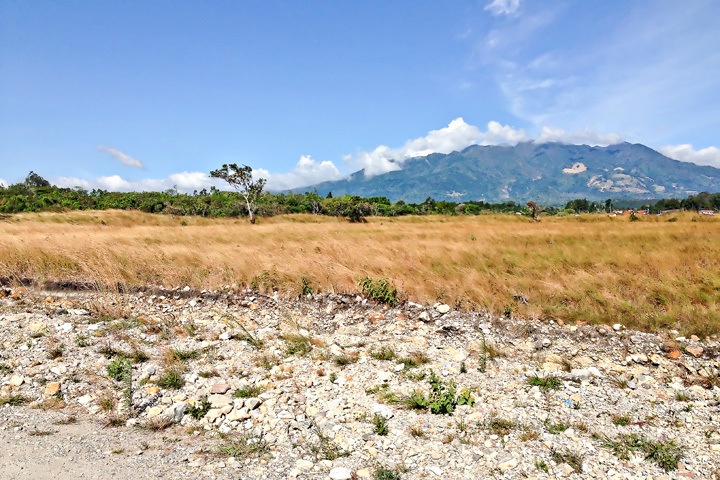 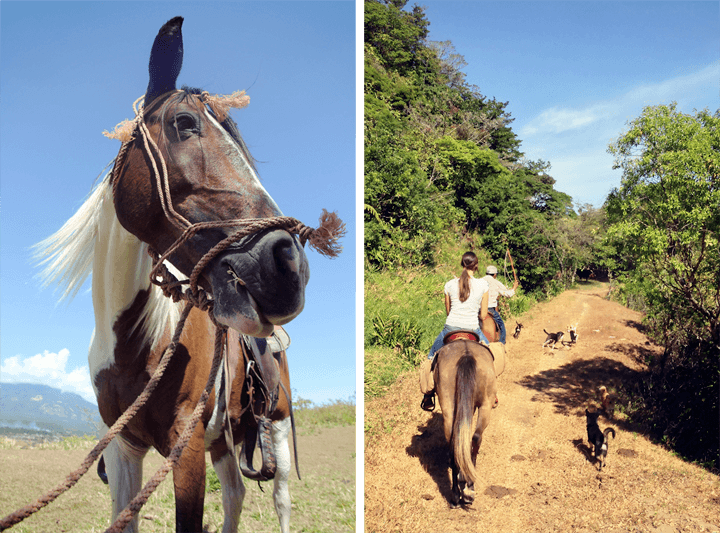 We chatted as we trotted through a deep volcanic valley, and then climbed up one of its steep walls. Thankfully, this wasn’t one of those mane-t0-tail trail rides that I find so boring. Our horses kind of did their thing, rearranging their  order and switching gaits and ambling around as they pleased. I was a little stressed a few times by how little control I clearly had over my horse, like when he started randomly galloping without warning, but I did enjoy the shot of adrenaline. 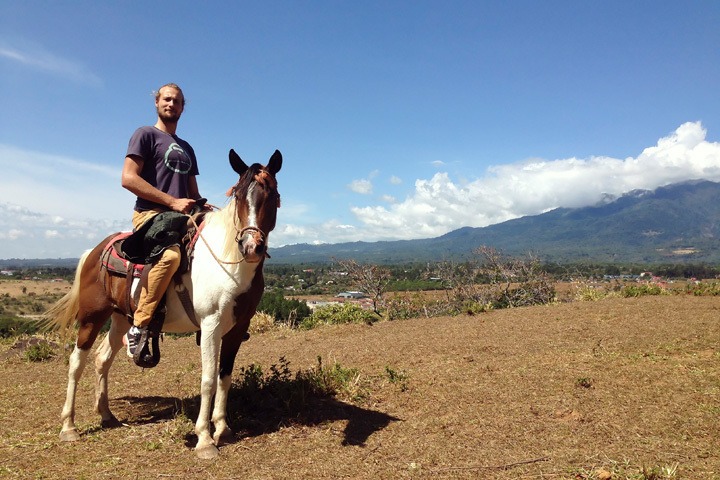 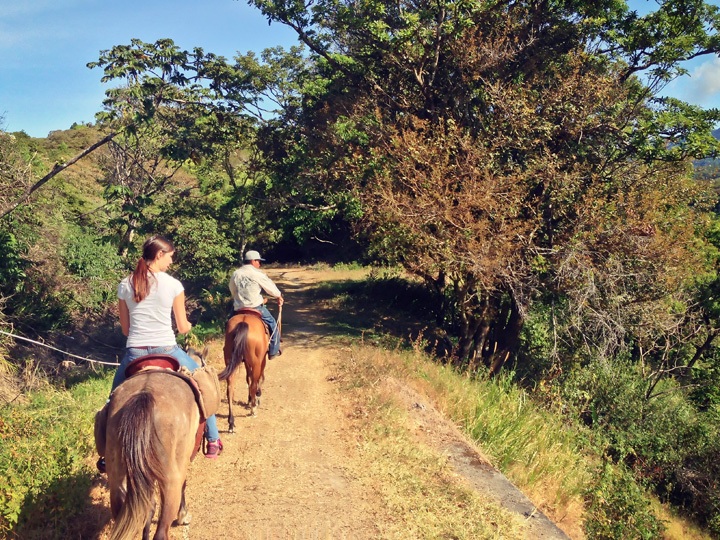 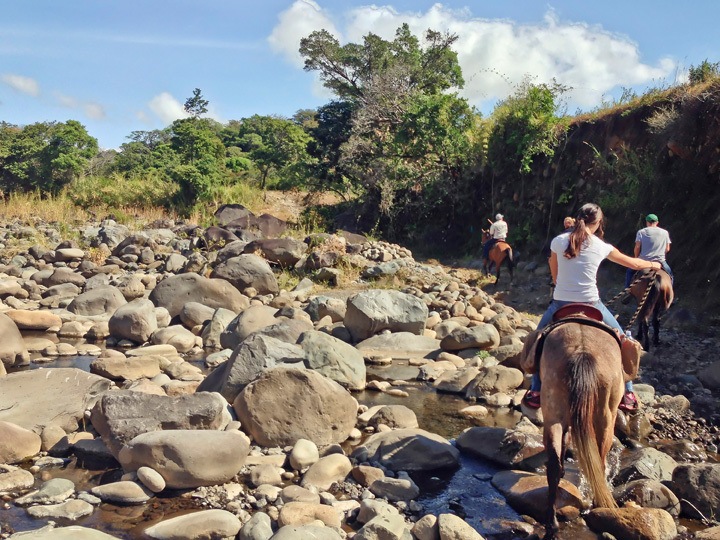 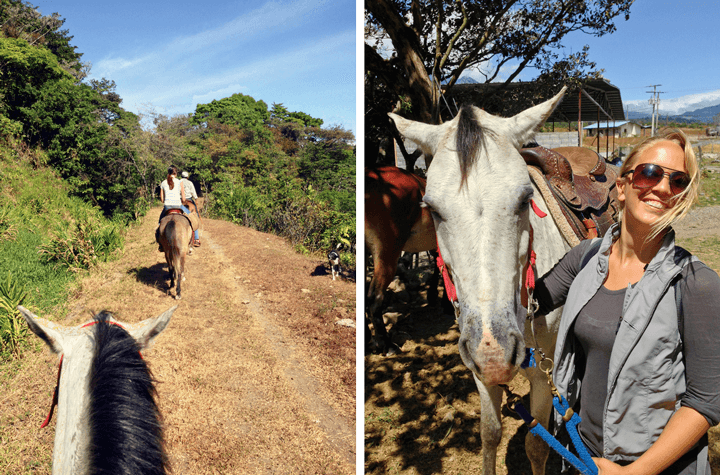 Another afternoon, we decided to join one of the many tours put on my our hostel every day. While I would have loved to do every single offering listed on the brightly colored colored chalkboard, prices of activities are higher in Panama and so we chose with care. We eventually settled on the $35 tour to the mini canyon and hot springs.

Our first stop, the mini canyon, was a hit among locals and tourists alike as we took turns leaping off the cliff and into the deep waters below. While the local kids would then scale the rock walls back to their original spots, we chose the tamer route of swimming out to the water-level access point downstream. One girl in our group was absolutely terrified to jump, but after a bit of peer pressure finally took the plunge. I was turning to swim my way to the exit when I heard her start panicking and screaming that she couldn’t swim — great! So I turned around and towed her the entire way out. It was absolutely exhausting but it was nice to brush off those ‘ol rescue diver skills.

Next we made our way down a long, bumpy dirt road to the area’s hidden hot springs. I was enjoying a nice soak in one of them when I looked up to see two incredibly sickly looking children sitting forlornly across from me, covered in unidentified lesions. I crossed by fingers that whatever they had wasn’t contagious, discreetly excused myself, and made a beeline for the river, where I scrubbed my skin raw. 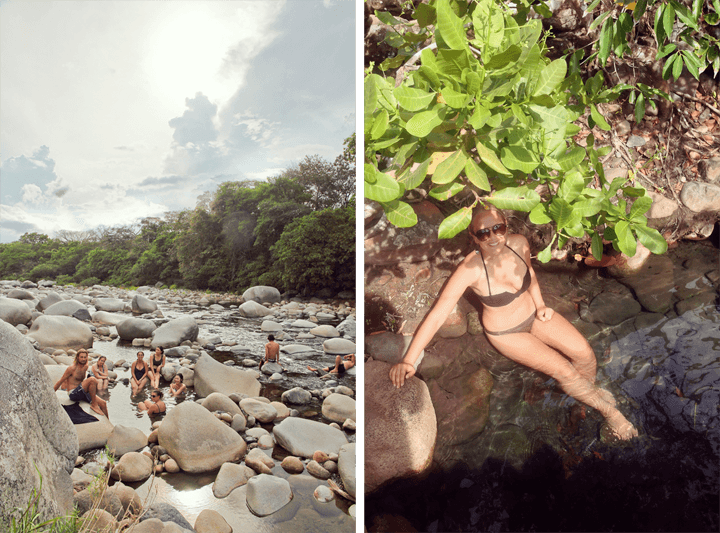 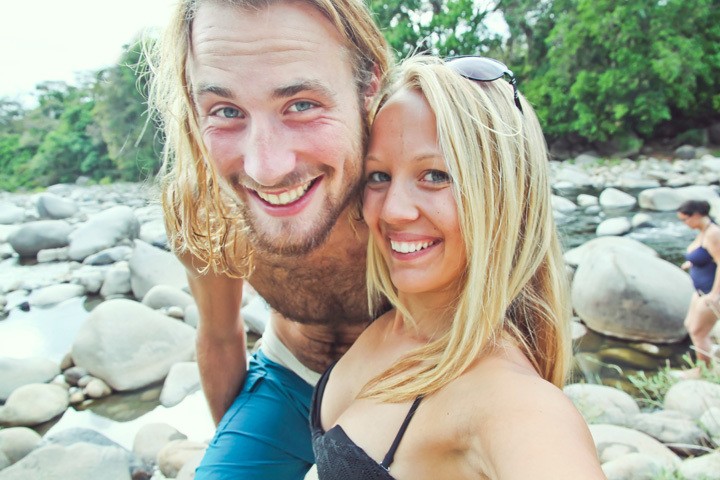 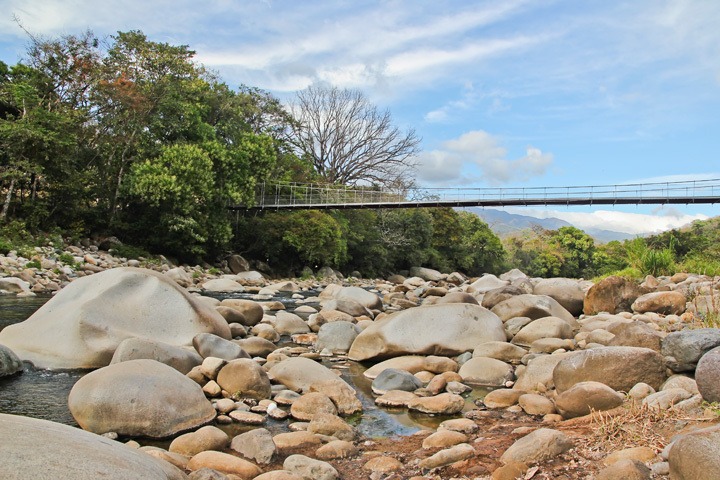 Suddenly it was our last day in town and we realized that while we have loved our low key days of working from Mamallena’s back deck and making home-cooked meals in the communal kitchen, we did have a few more things we wanted to explore beyond the hostel doors. So we forked over $20 each for a motorbike rental and zipped out of town. 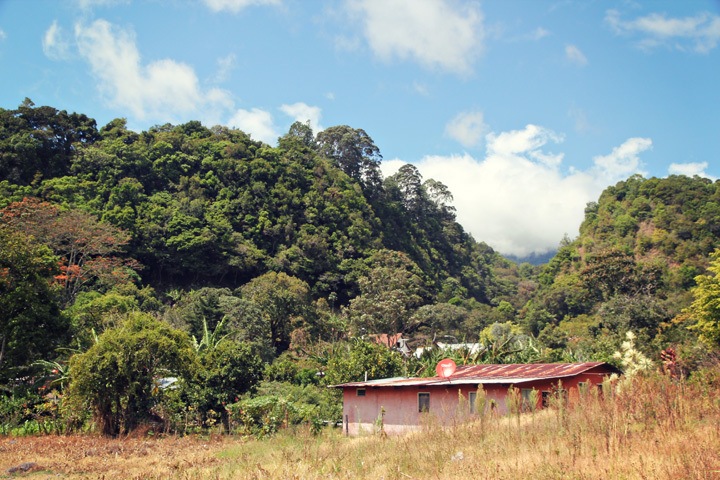 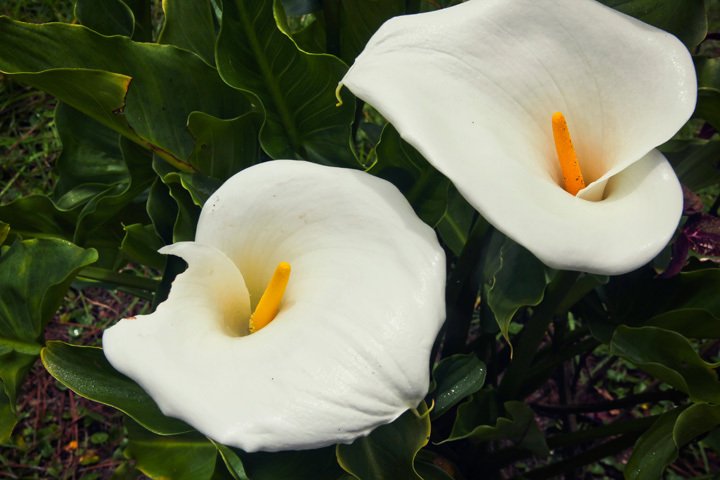 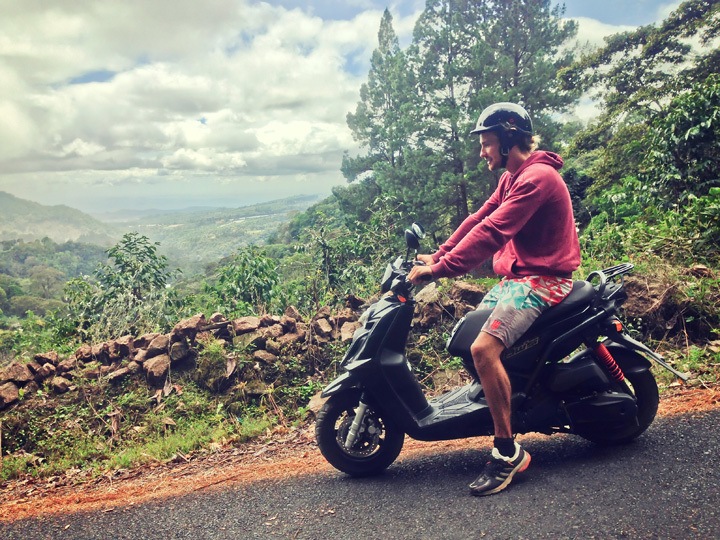 We spent a fair amount of time just getting lost on the winding mountain roads that swirl around Boquete, which is not a bad way to spend a day. Eventually though, we honed in on finding The Lost Waterfall. Which, surprisingly, was not the easiest to locate.

Finally we found the way, and parked the bike to do some foot-based exploring. Turns out the Lost Waterfall is actually three waterfalls, which made us feel better about the $5 entrance fee we paid at a dilapidated hut by the road. 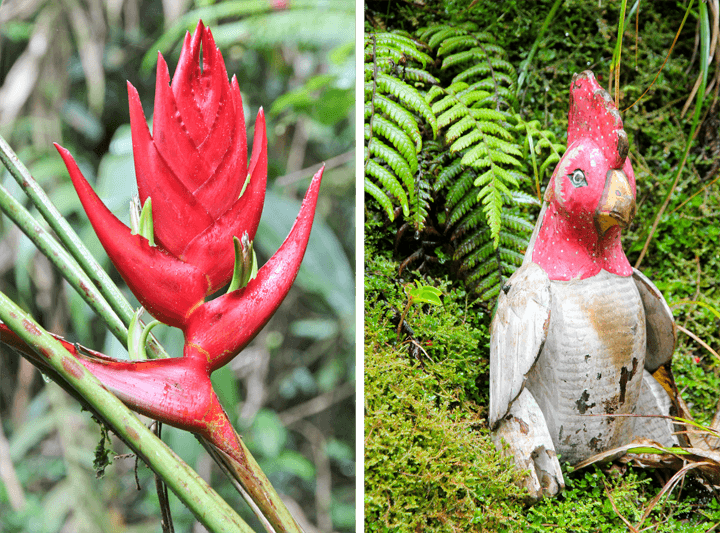 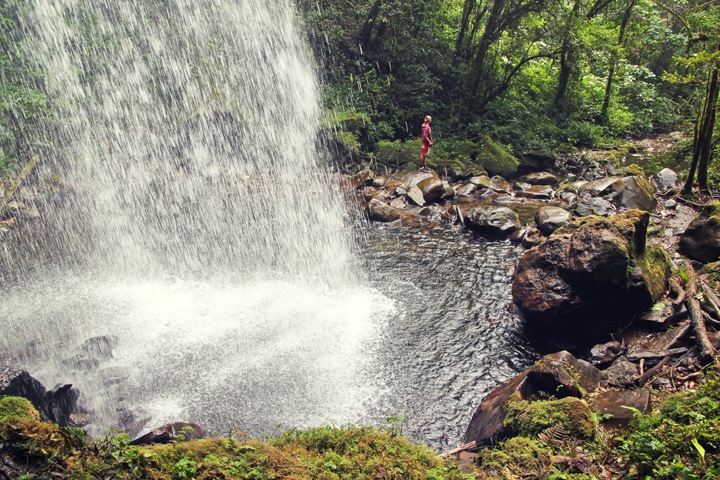 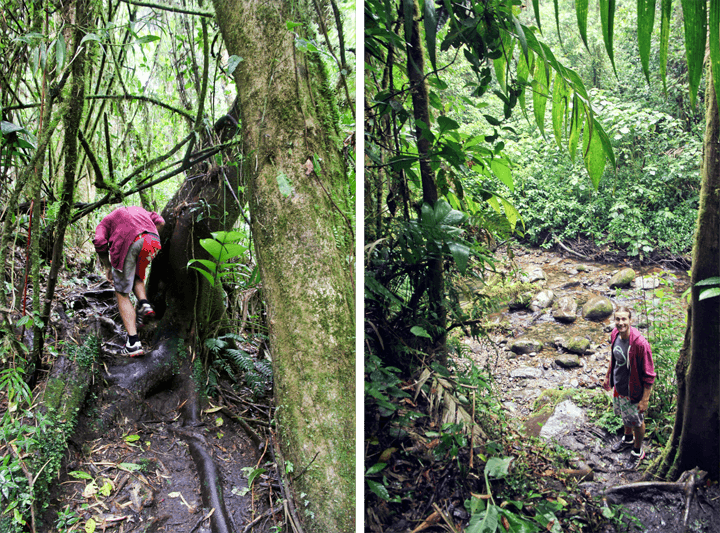 The first two waterfalls were easy to reach, though the third was more of a challenge due to the drizzle that just wouldn’t quit, the slippery trail that resulted and muscle fatigue that had started to set in. But they were each stunning in their own way and we pretty much had the entire place to ourselves. 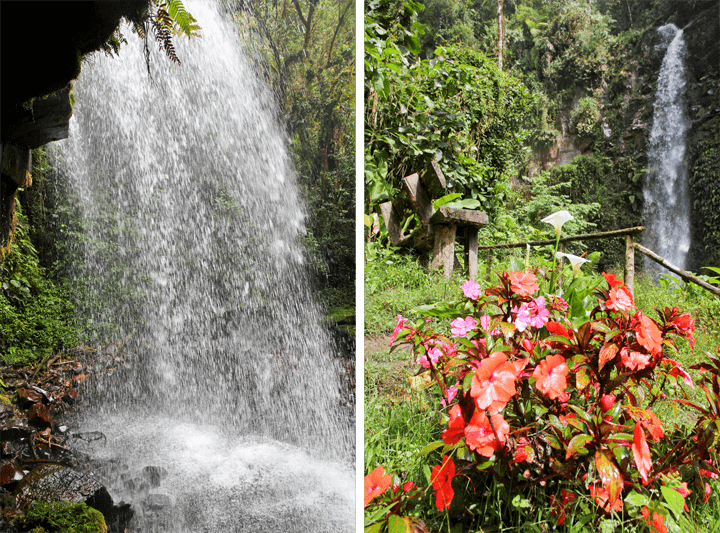 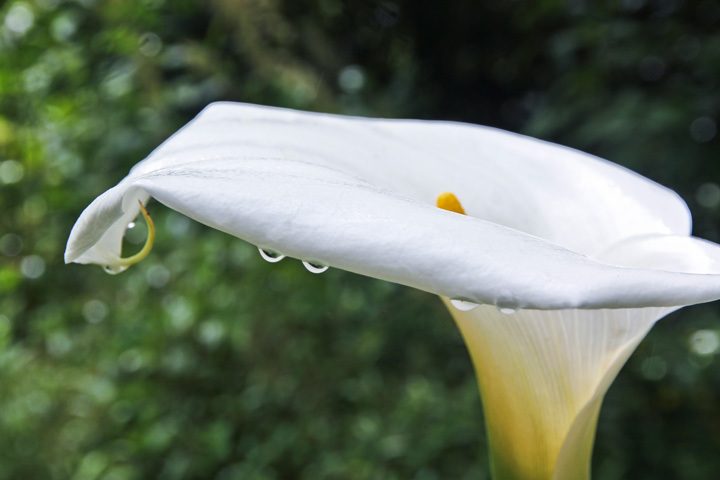 Back on the bike, we agreed to head back — we were soaked from hours of consistent drizzle and the evening chill was starting to set in. But as we turned a corner I yelled to Anders to slam on the breaks — a bright rainbow was arching over the mountain. And so we set off chasing it. 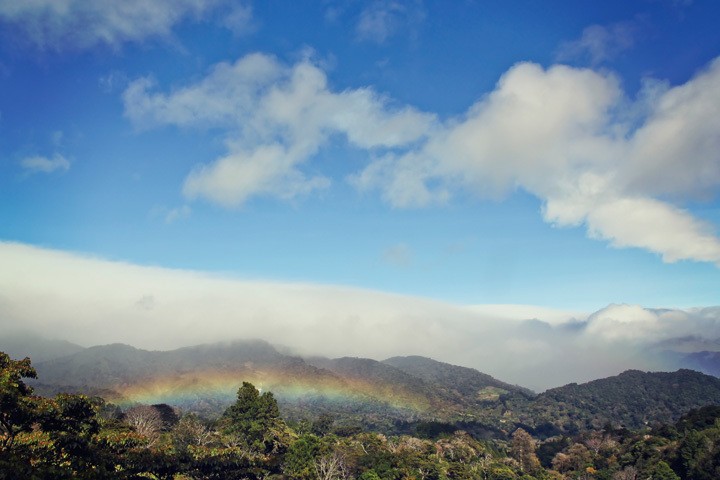 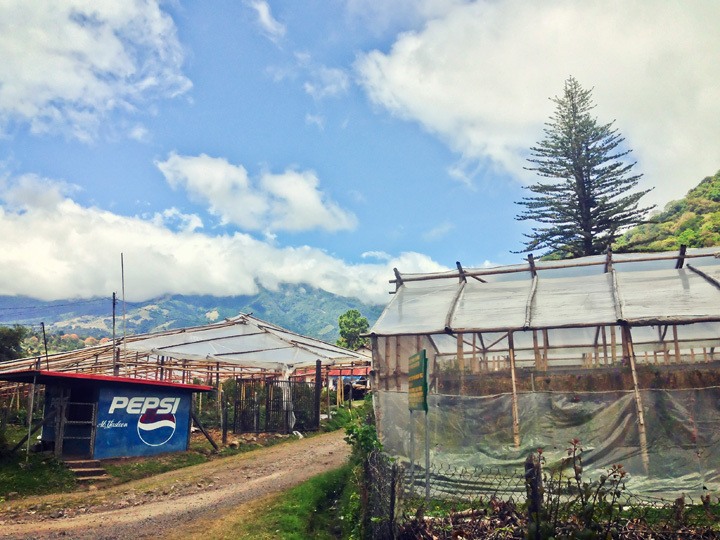 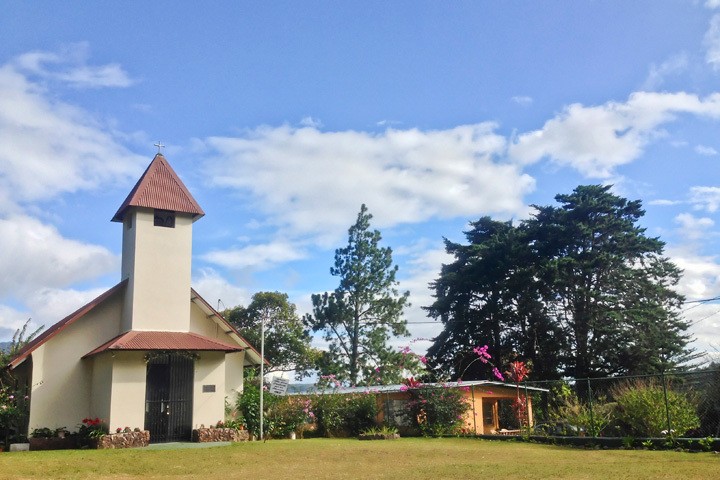 Our pursuit wound us through the quaint outskirts of Boquete town, weaving from one technicolor view to the next. 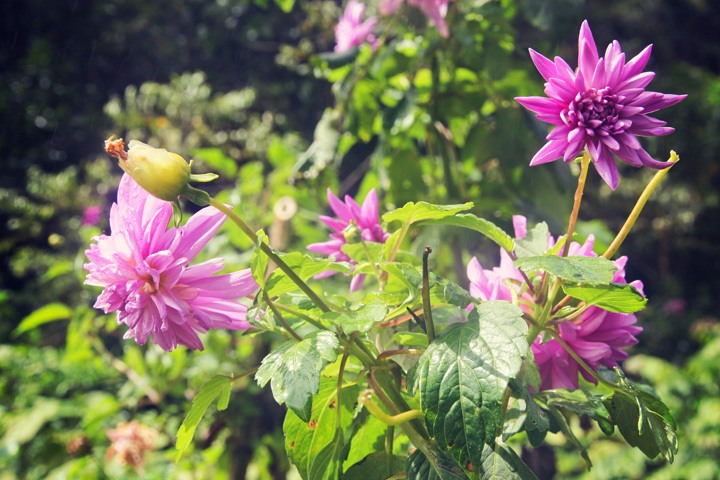 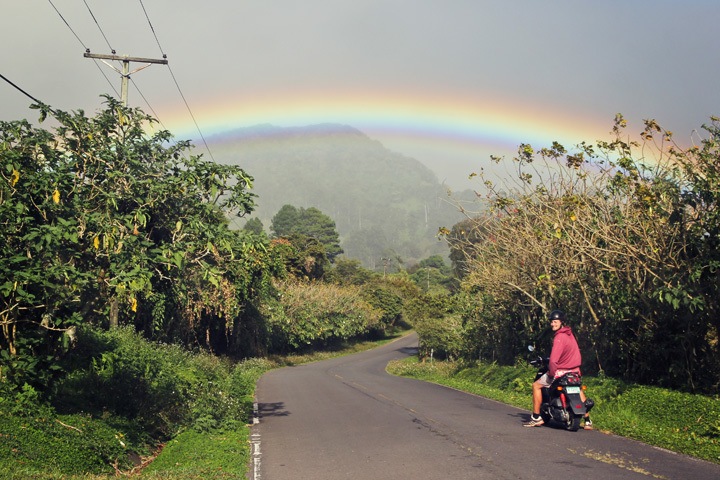 Eventually we truly did drive straight into that rainbow — one second, it was so close I felt I could reach out to touch the shimmers of color and the next moment we were actually inside of the dewy haze. It was the perfect goodbye to peaceful Boquete.

Where I stayed: Mamallena
Where I ate: Sugar and Spice was a fantastic sandwich spot for lunch, Big Daddy’s Grill was a good dinner bet, Rock was a fun splurge with friends, and El Sabroson was our absolute favorite for local specialties at bargain prices.
How I got there: We paid $15 for a tourist shuttle from Santa Catalina to Santiago, where we caught a bus to David for $9. From there we squeezed into an old school bus for a $2 ride to Boquete. In total it took about nine hours.
Bonus Tip: If you’re planning to rent a motorcycle, pay more for on of higher quality. We had originally planned to rent from a cheaper shop but they were all rented out. Once we got out on the roads we saw other travelers struggling to get those cheaper, lower-powered mopeds up the hills!

Get Your Bum to Bastimentos

A Crazy House, A Love Valley and A Parking Scam: Dalat Part I