Ask a backpacker about the beaches in Panama, and it’s likely they’ll start waxing poetic about the Caribbean sands of Bocas del Toro. And for good reason — it’s a unmissable stop on the gringo trail of Central America. But for the hearty few that touch down on the golden sands of the Pacific side of Panama, there’s a hidden gem awaiting in the laid-back surf village of Santa Catalina. 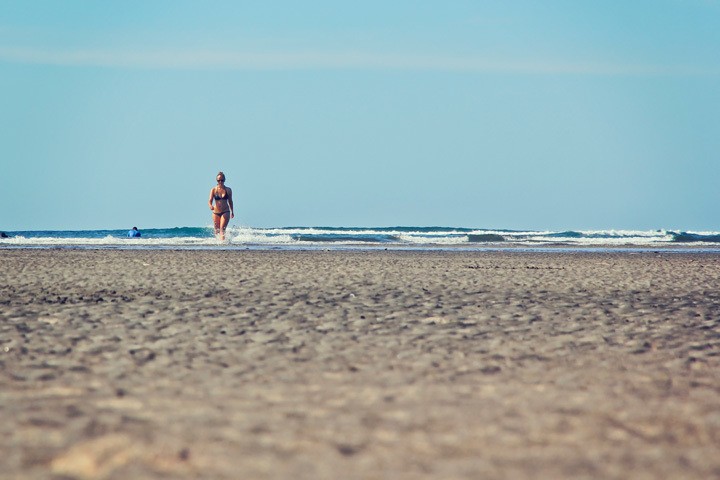 With its remote location, undeveloped infrastructure, lack of high-end accommodation, zero ATMS, several bus connections required for arrival, and — gasp — extremely limited internet connectivity, Santa Catalina has yet to be discovered by the masses. Right now, the town with a permanent population of 250 is still a haven for surf bums, dedicated relaxation-seekers, and divers heading into Coiba National Park. Clearly, we fell into the latter group.

We booked-ended our four-day dive trip in Coiba National Park with two nights in Santa Catalina pre-departure, one one post-return. We did that not only for logistical reasons — public transportation in and out of Santa Catalina is limited, and travel distances exhaustive — but also so that we could soak up some of the tranquility the town seems to ooze. 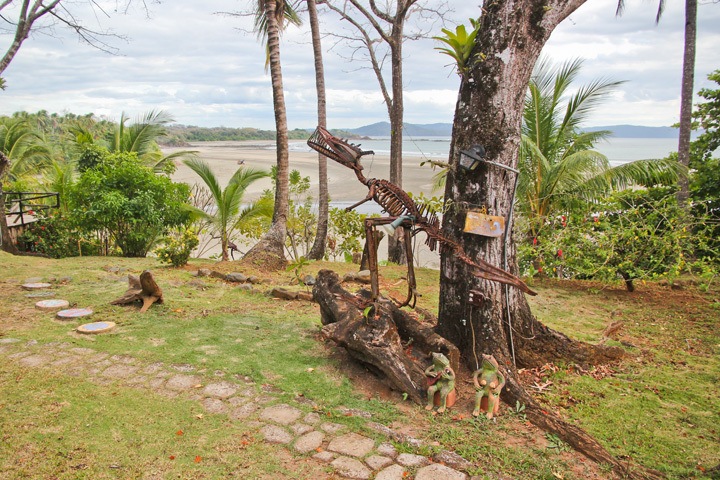 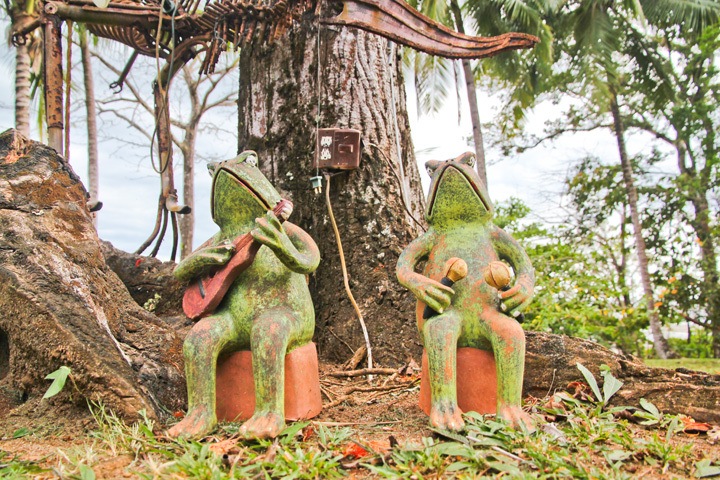 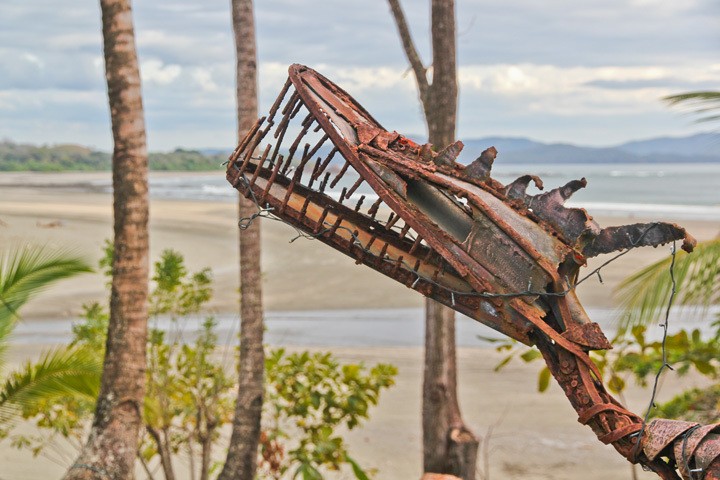 Anders was in charge of finding us a place to stay, and he settled on Rancho Estero. Though it was about a fifteen minute walk away from the main street of Santa Catalina, we were completely won over by the views out over Estero Beach, and promises of both an outdoor kitchen and yes — internet access. After all, I was about to go off the grid for four days — I wanted to soften the blow of my inbox upon return as much as possible!

We arrived in Santa Catalina after seven hours of transit from El Valle, and instantly felt the stress of our three hectic bus transfers melt off of us. We strolled into town for a pre-trip meeting at the dive shop and some supply gathering. We quickly adapted to the local method of grocery shopping, which includes chasing down the local vegetable man who cruises through town in a pickup truck blaring his daily offerings through a megaphone out the window. 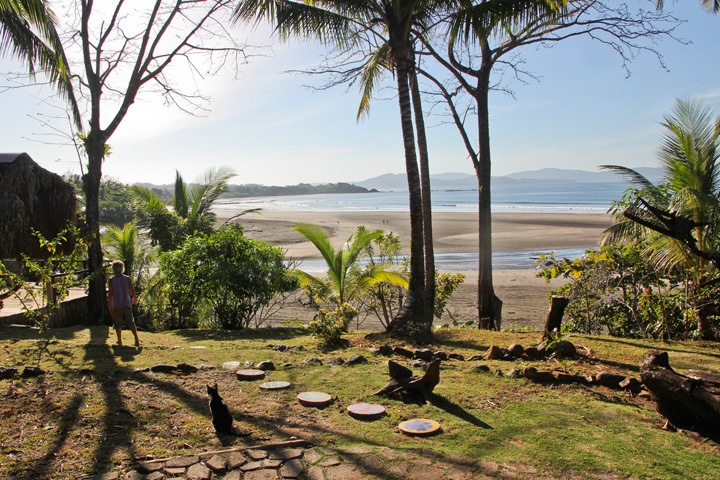 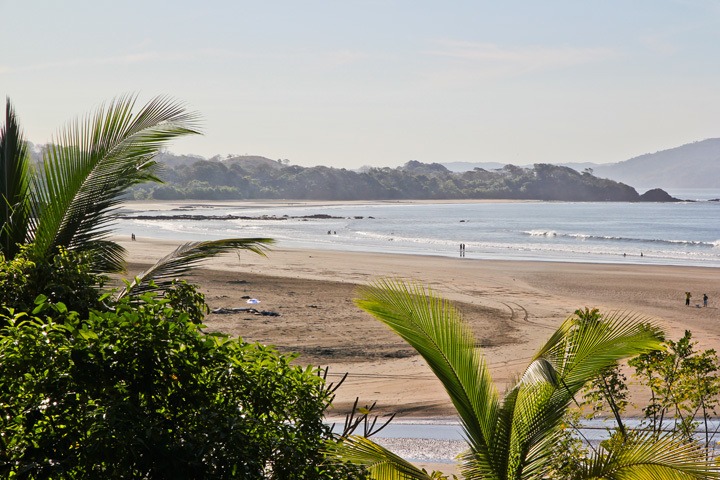 That night, we headed back to Rancho after dark, walking down a dirt road under a black sky speckled by stars. We were ready for a quiet, early night in our little haven in the middle of nowhere.

As we approached, we were startled to hear the ever-louder beat of an aggressive strain of Reggaeton music. By the time we got to our cute little cabin on the cliff, we could barely converse at a normal level. We soon found the source — a faint light revealed a small group of campers on the beach.

We tried watching a movie on my laptop but even with our headphones in we couldn’t hear over the music. Then I tried reading but I couldn’t really hear my own thoughts. I could not even describe to you the volume that this music was being played at — I would compare it to standing next to the speaker at a megaclub, except it was more like I was inside the speaker. And considering I was actually inside a hut high on the hill over the beach where the sound was emanating from, I’m kind of amazed the people standing next to it weren’t being treated for shattered eardrums. Later, the hotel manager would explain to us that he was tortured in this particular manner whenever it was a holiday weekend, and party-loving Panama City rich kids descended upon the otherwise peaceful beach.

It was a restless night, but mercifully at some point the music stopped and we figured the offenders either fell asleep or were killed by sound poisoning (that exists, right?). But at around 7:30am, the pandemonium began again.

I mean, I could probably be down with some full volume Bob Marley. But this was like a staticky used car salesman commercial overlaid with the most hostile dance-hall reggae imaginable. This time, fueled by exhaustion and onset insanity, I jolted out of bed and strode for the door. Anders looked truly terrified when he called after me, asked what I was going to do.

In the light of day, I could clearly see the offenders. They were gathered around a bright green Jeep Wrangler with a multi-thousand dollar sound system built into the back, staring impassively as I approached them with bed head and glasses askew. “¿Es posible bajar la música, por favor? Muchas personas necesitan dormir.” I tried to be as friendly as one can be under the influence of sleep deprivation, while still emphasizes subliminally that I was not above violence. I received a hint of a nod in response, though I saw one of the crew hop off to turn the volume down a few notches. A bleary eyed fellow guest clapped upon my triumphant return. 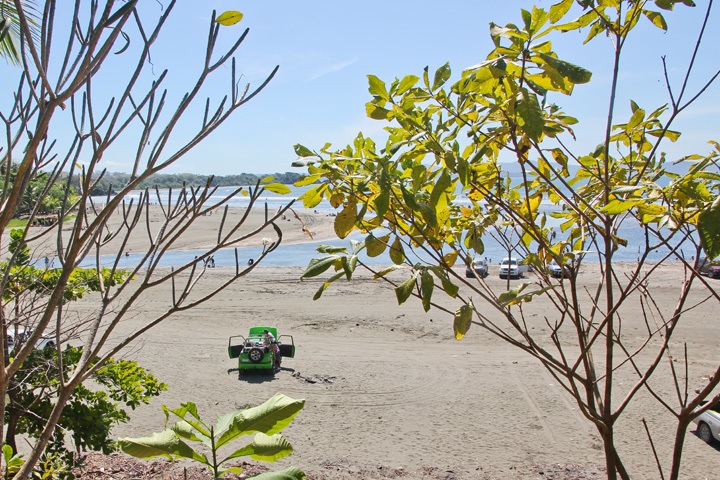 While our ears were no longer on the verge of bleeding, sleep was still pretty much out of the question. On the plus side, the shared experience gave us plenty to chat about with the other travelers at Rancho, who had also come to Santa Catalina for some peace and quiet. When the manager joined he laughed at the bravado of a blonde-haired gringa approaching a group of hardened Panamanian badasses and asking them to turn the music down, por favor.

After breakfast I accepted that the noise wasn’t going anywhere — we were still in the nightclub speaker — so if we couldn’t beat them, we would join them. I tried to meditate on my Burning Man principles, and how the green jeep-ers desire for a party weekend was as valid as my own desire for a sedate one.

And off we went to the beach. 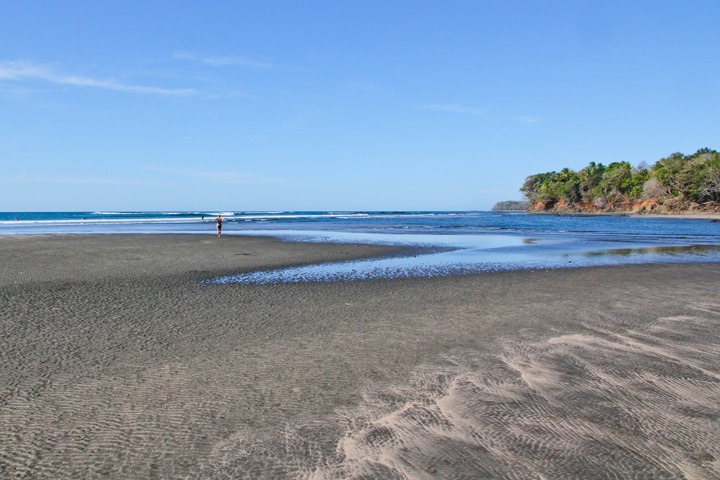 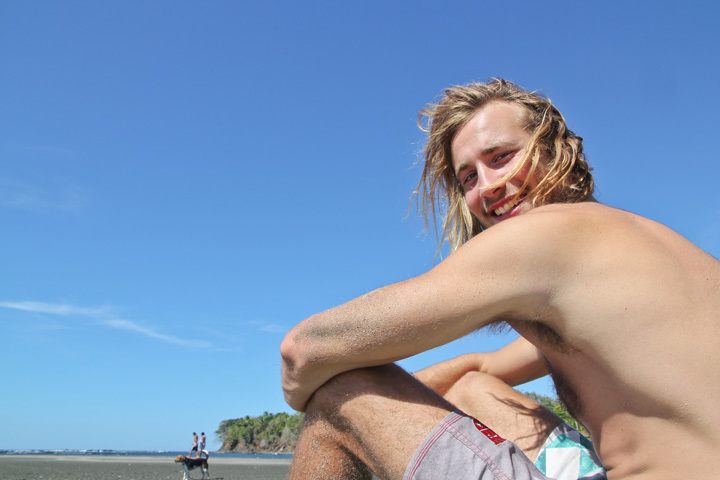 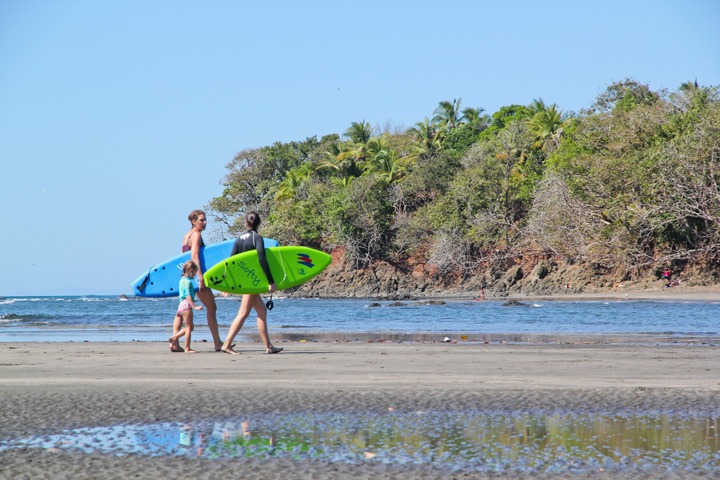 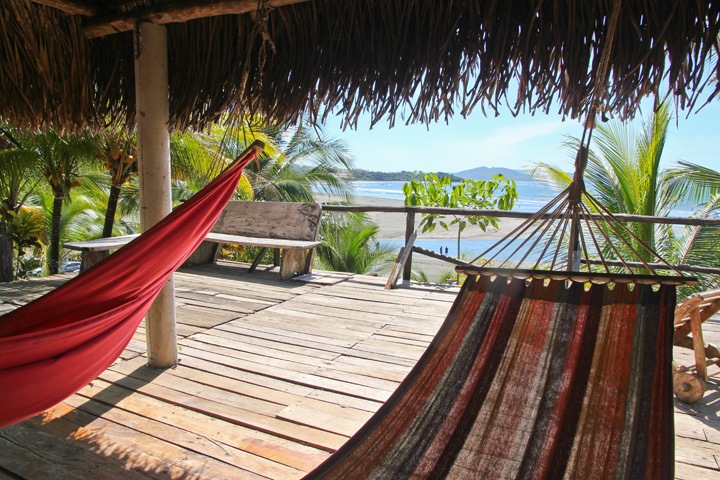 Estero Beach was the perfect representation of an untamed Pacific ocean coastline. Dark sand, tangled tree trunks, and angry waves beating against the shoreline. We spent a lazy morning dipping in the ocean, searching for hermit crabs, and reading on the sand.

Our budgets were still hurting from all the irresistible restaurants in Panama City, so we were thrilled to be cooking our own meals again — and you can’t beat a kitchen with an ocean view. Or a dining room made of hammocks. 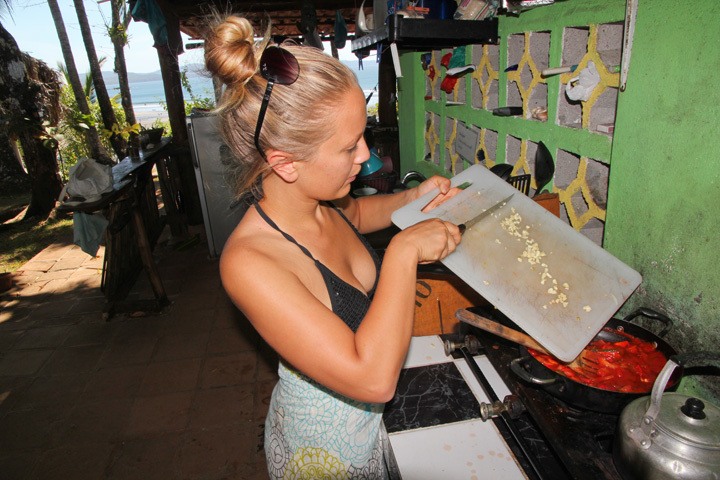 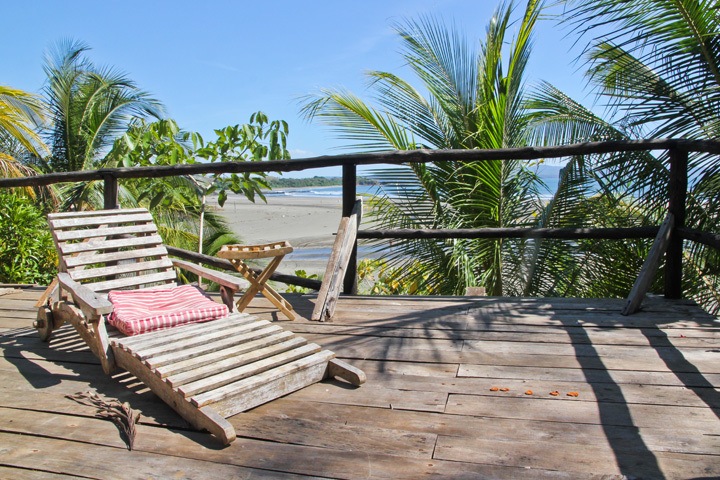 By mid-afternoon, the noise terrorists seemed to cleaning up shop. Throughout the day we had watched with amusement as a parade of fed-up beach-goers pled their case — as a result the volume would be turned down temporarily, though it always crept back up. But before revving off into the distance, the green jeep made one last territorial show of blaring their music to the point that every last person in Santa Catalina must have heard it. We were not the only ones cheering when they left.

Feeling like we had just been freed from a sound prison, we did a triumphant lap up and down the beach. 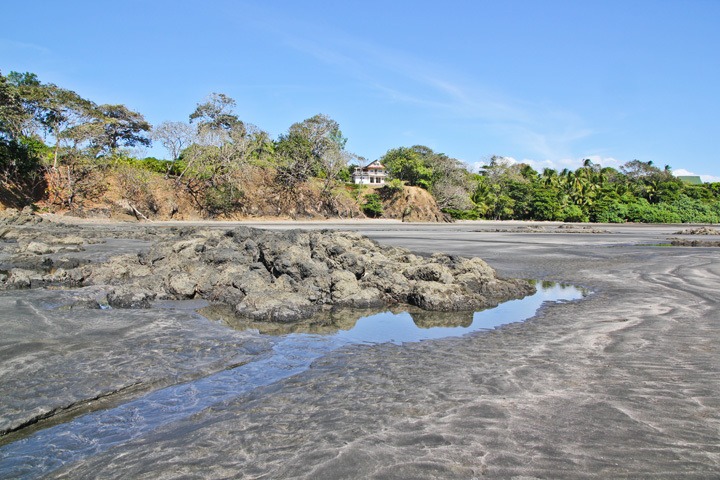 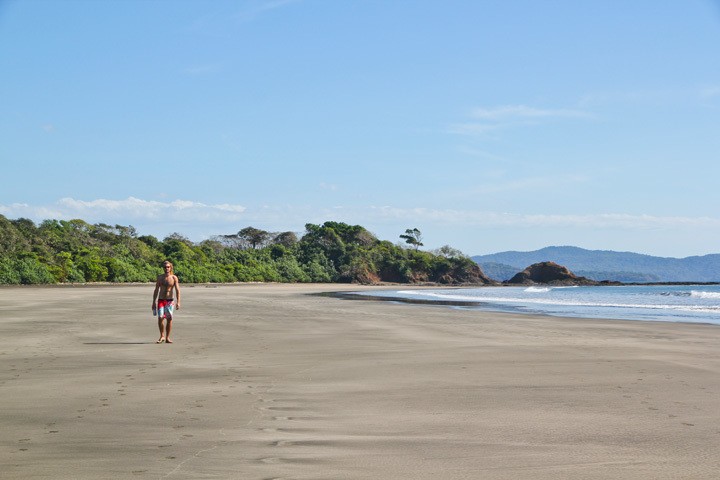 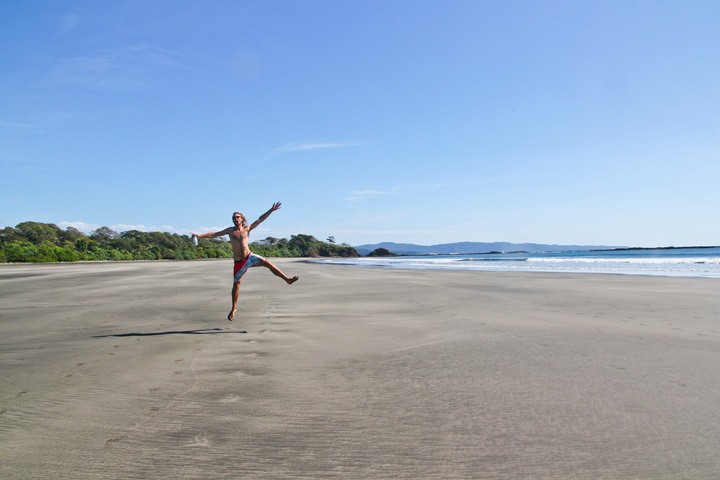 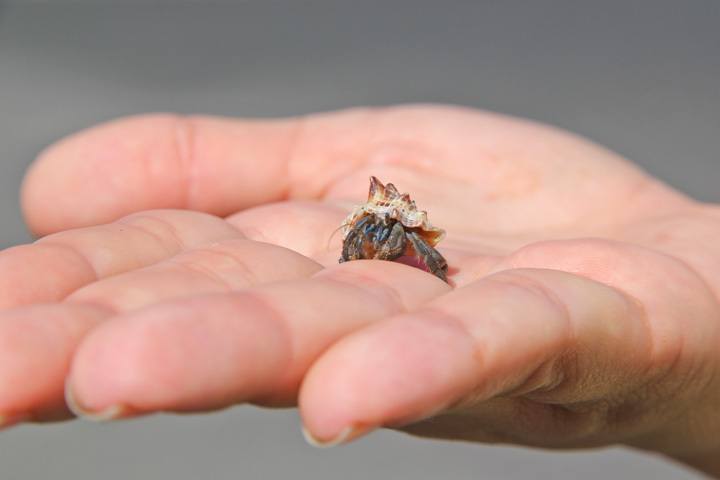 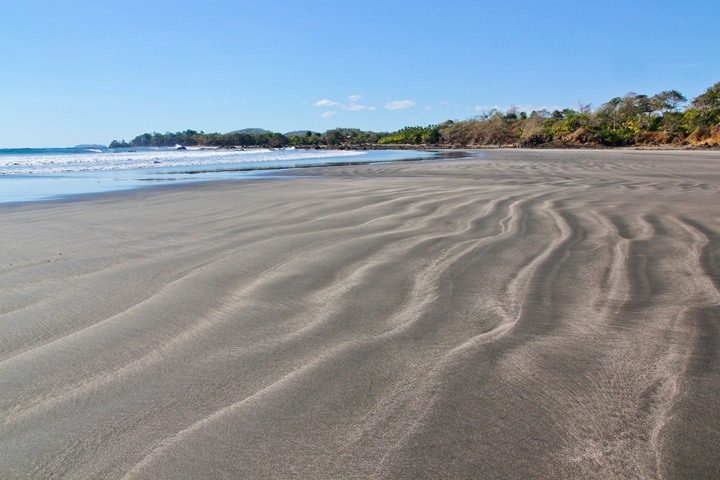 That night we strolled into town once again, this time to drop off our dive gear and watch a seaside sunset from Santa Catalina beach. It was stunning. 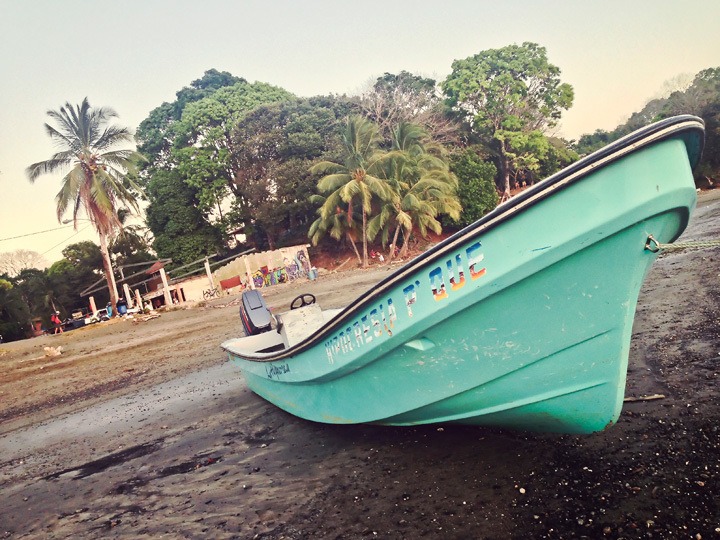 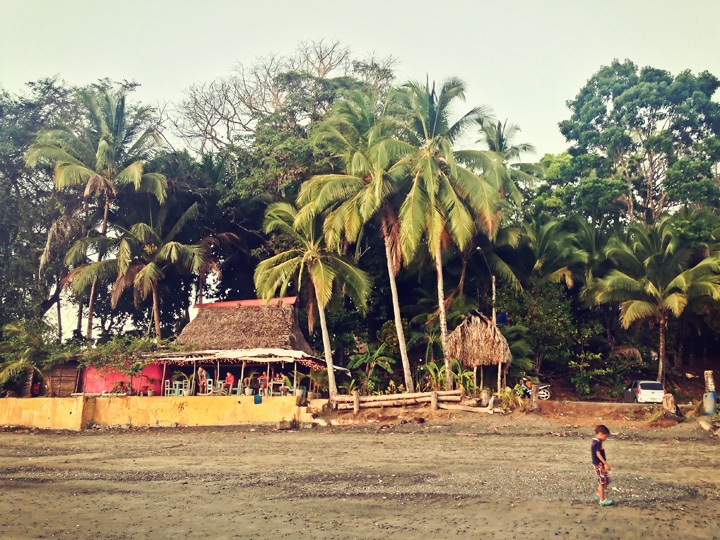 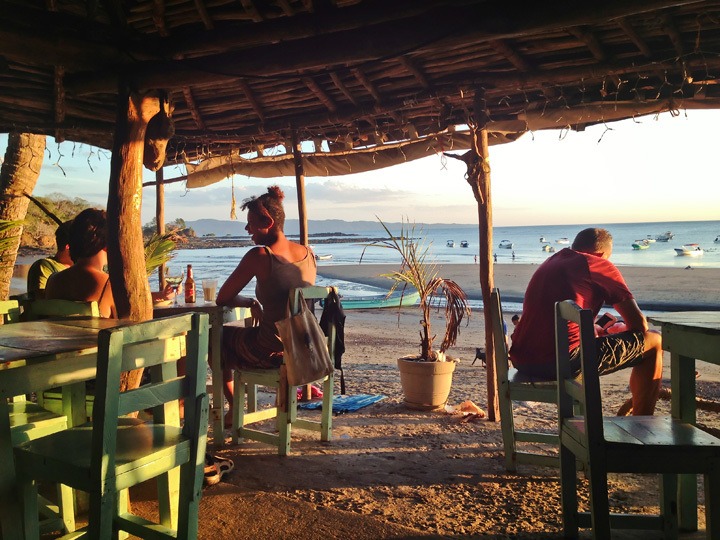 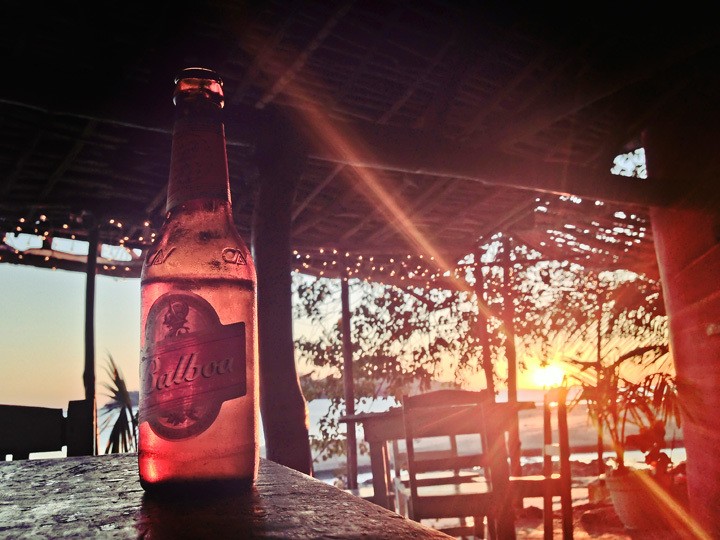 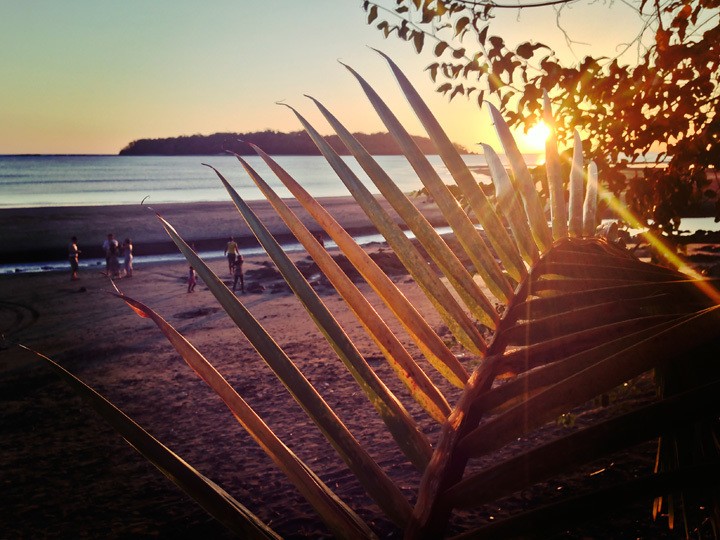 Aside from the particularly ugly sound situation, I loved our time in Santa Catalina. And just to head off any “whiner!” criticisms, I want to be clear that if I was in a city or known party place I would never have the audacity to complain about noise. But when a destination is billed as a soothing and quiet retreat, I’m not expecting to bring earplugs. Still, it’s a special thing to visit a place with the potential to explode with tourism — yet before the masses arrive. Change is in the air in this laid back surf town, and I have a strong feeling that Santa Catalina will be one of those places we look back on someday and starting waxing nostalgic about “way back when…” So come to Santa Catalina quickly, while it’s still a town that time — and most tourists — forgot.

You may, however, wish to skip the holiday weekends.

Where I stayed: Rancho Estero
Where I ate: We mostly cooked for ourselves. Jammin Pizza was okay but nothing mind-blowing.
How I got there: It took seven hours to arrive from El Valle via public transportation. I spent $3.50 on a minibus from El Valle to Penonome, $5 on a minibus from Penonome to Santiago, $2 on a minibus from Santiago to Sona, and $7 for my share of a pickup cab from Sona to Santa Catalina (we missed the last bus.)
Bonus Tip: There are no ATMS in Santa Catalina — stock up on cash before arrival. Also, don’t expect to answer any emails. Even places that claim to have wifi will often have service outages that last for days.

Would you make the trek to Santa Catalina? Have you ever had a peaceful retreat interrupted? How did you handle the situation?

Blissing Out in Bocas del Toro