Each month I take some time to reflect not just what I’m doing, but how I’m doing. You can read my previous roundups here, here, here, and here.

Reading through my Month 5 Roundup and my Cambodia vs. Vietnam comparison, it’s no secret that Vietnam didn’t “speak to me” the way that Cambodia did. I had so many moments of quiet joy there, my highlights list from Month 5 was almost a post onto itself. In contrast, Vietnam really challenged me. My highlights in Vietnam were about having fun and escaping the stress of traveling in country that so many people love to hate.

The end of Month 6 brought me right back to Thailand, my home base in Asia. I thought I would feel mixed emotions at pulling off the road but in the end I was ready. Six weeks is just enough backpacking time for me. I was ready to get back to the island life. 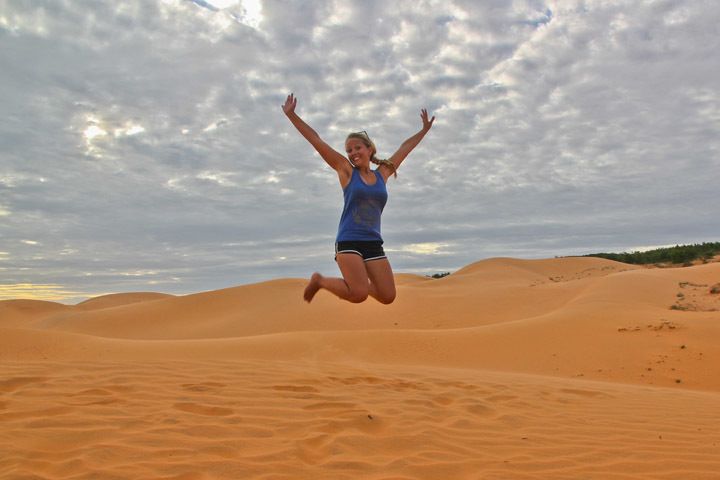 • 2 nights in Phnom Penh, my final ones in Cambodia!

• One week back in our home away from home — Thailand 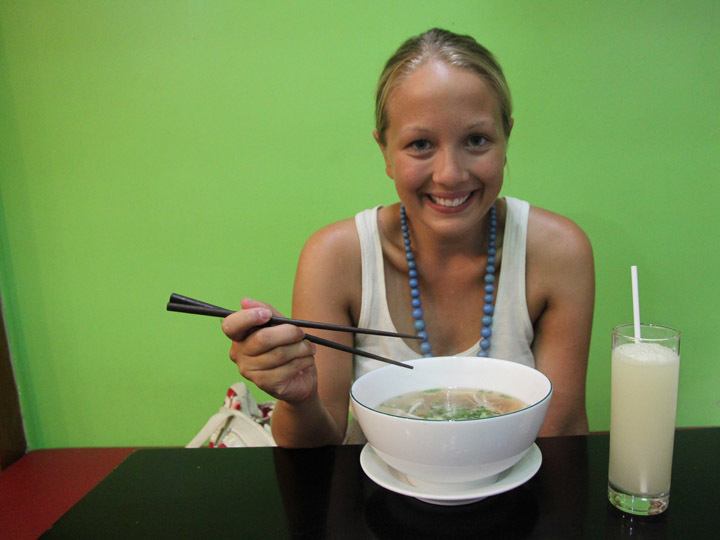 • We were giggling like schoolgirls when we pulled up the final results of the survey that would send us to our next destination. It was such a fun experiment.

• Our final weekend in Cambodia was spent cooling our heels in Phnom Penh, waiting for our Vietnamese Visas. We’d already spent 5 nights in Phnom Penh previously, more than enough for most people. But we had a ball hanging out with our friends from Mad Monkey, seeing the Water Festival, going rollerblading, watching movies, and most importantly: posing the most hilarious portraits ever taken in the history of modern photography. It was a bizarre weekend but weirdly, I felt like I was home.

• For once in my life, I played well with the food in a new country. I was all about pho noodles, Vietnamese curry, and the amazing bakeries around every corner. I even obsessed over random things like a brand of banana popsicles that I ate daily and I will never forget.

• Saigon and I did not get along. Not at all. But I had one happy moment there that I tried to remember whenever I was faced with extreme cold shouldering. One night we were walking home through a park filled with people. There were groups of people everywhere playing this kicking game with a little badminton like birdie thing (I’m so into sports). Mark wanted badly to join in, and at one point when he kicked an errant birdie back a group gestured for him to join them. While I was sitting and watching a college age student came and chatted with me, eager to ask me what I thought about the traffic and teach me some Vietnamese. It was a really warm moment. A happy memory.

• Nha Trang was unlike any destination I’ve been to in South East Asia. To me it was the Vietnamese Myrtle Beach, or Las Vegas- a place where I could have silly hedonistic fun every day and not feel guilty about it. Hilarious booze cruise? Check. A Disney-esque island playland? Check. Playing with mud in public? Check! I let myself take a vacation from our travels, and I needed it.

• Outsiders might be shocked by how competitive backpackers can be at the budget game. “You paid $15 a night for that room? Pshhh. We paid three, and I don’t even care that we had to shower with a hose!” Suffice it to say that Mark and I never feel that we are winning the budget game. So imagine our surprise when we found ourselves bragging about our clean, modern $8 a night hotel room in Nha Trang (with a flat screen tv, might I add!) Then, we scored the deal of the century paying $40 for two dives with the most lux dive operation I’ve ever dove with. It felt so good to win!

• The quirky attractions in Dalat made me squeal with joy. I know its crazy, but sometimes I’d rather see a two-story statue of a shrimp than the Eiffel Tower. What made me even happier though was knowing that those are totally not Mark’s thing, but he went along for my benefit. And I just as much enjoyed scouting out the area’s natural attractions as well.

• Occasionally when traveling for as long as we were, I experience “creative burnout” and just dump the camera on Mark. Mui Ne turned that around really quickly with settings like these and these. It felt so good to be excited about taking pictures again.

• I know this is a horrible attitude to have (one that I perhaps should not be spouting on about on the internet) but I entered Vietnam convinced that I would leave the country having been relieved of one of my valuables. And I wasn’t! Score!

• I had a real moment of bliss flying back into Bangkok from Saigon. First of all, we were in an airplane, and not subjecting ourselves to a 36 hour bus ride. That right there is enough to bring anyone to happy-tears. But more importantly, I felt a weight come off my shoulders. I felt like I was home…. my home away from home, anyway.

• While traveling I developed a lovely little fungus issue on my chest and shoulders (sex-ay!) I was dreading dealing with it but Mark convinced me to go to a clinic once we returned to Bangkok. I halfheartedly called a clinic that came up in Google’s search results, expecting a month’s wait to see a specialist. They told me to drop by that day. I walked into Bumrungrad Hospital’s dermatology clinic without an appointment, filled in a one page back and front intake form, and was seen within minutes. I was diagnosed by an excellently English-speaking doctor, and sent back to the waiting room. Within moments I had paid and was handed my two prescriptions. Total cost: $65. Total time: 40 minutes. It was the most efficient health care experience of my life. I can see why people want to retire here! 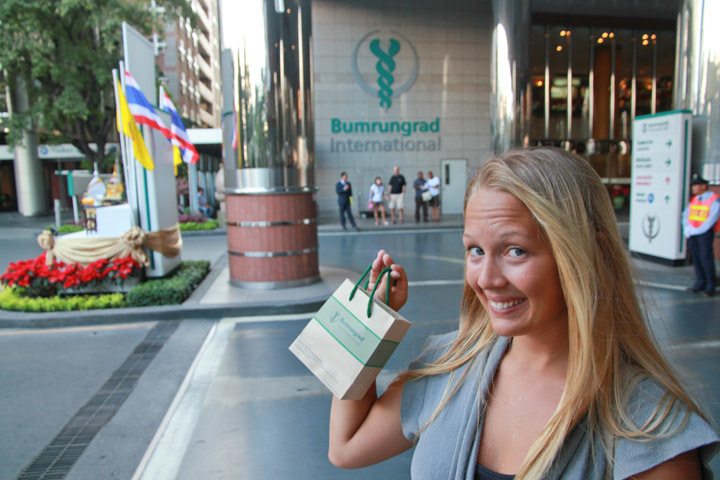 • Once again I struggled with balancing work and travel. Good internet connections were hard to find, but even more elusive was the time to use them! By the time we returned to Thailand I was itching to spend a week of quality time with my laptop.

• Oh, Saigon. I really hated you. And knowing how much glee I take in loving a place that everyone else loathes, I was looking forward to having a long friendship with this city. But the traffic, the crime, the grime, the disgusting excuse for a zoo… I was not charmed.

• Vietnam forced me to face some very ugly truths about my home country’s involvement in a messy, messy war. I wasn’t sure what was worse: the fact that I didn’t really know that much about the war up until this point, or the one-sided and propaganda fueled way people are learning about it Vietnam today. That aside, I spent a lot of this trip dwelling on the depravity of the human condition. Coming to Vietnam is bit darker than your average beach vacation.

• I was very sobered by the fact that a tourist died while kitesurfing on the very day we had our own windsurfing lessons. I think maybe the fact that it was a tragedy that likely could have been avoided with a life jacket really disturbed me.

• All. the. scamming. I was so sick of it I wanted to scream sometimes. From the bait-and-switch buses to the spa treatment tipping extortion to the ridiculous parking scams, I felt like I was constantly playing tug of war with Vietnam over my wallet.

• Have I told you guys about the time I accidentally got a massage at a happy ending parlor? No? Well, save the worst for last. So, we were in Nha Trang and I wanted a massage. We walked to a mid-range spa I had seen but it was kind of pricey and Mark asked that we look for somewhere cheaper. As we had bickered that day about how I always get my way, (moi?) I cheerfully agreed. When we approached a seedy looking place I ignored my gut and walked in. When we entered and a voice inside screamed SKETCH BALL I told that voice to shut it. When we were escorted to private rooms by girls wearing stupid sexy dresses, I knew something was up. There are never private rooms at spas in Asia. The massage was terrible and of course we were extorted for a tip after. But the absolute worst moment by far was hearing the “masseuse” in the next room ask my boyfriend if he wanted a happy ending! I stifled a laugh as I heard him stammer out a polite “no,” but seriously, we could not get out of there fast enough. I had to take about 12 showers after living through that experience. At least I have a new conversation topic for formal dinners. 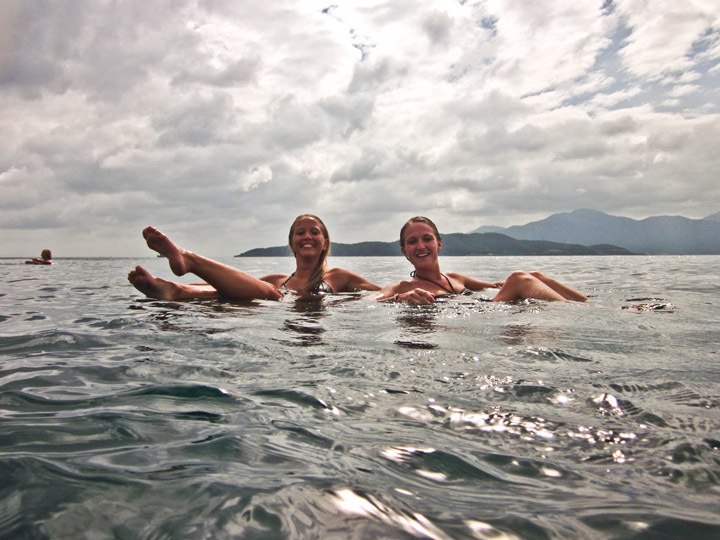 The Budget
Overall, we spent less in Vietnam than we did in Cambodia which is pretty amazing considering how much we jam-packed into three weeks. Money was definitely going out rather than in, but I felt good about our spending this month.

Unfortunately, after being so successful in Cambodia at obtaining sponsored travel, (admissions, tours and hotel stays in exchange for reviews on this site) I totally dropped the ball in Vietnam. It was just so much work to send out the emails, go back and forth with correspondence, and deal with the inevitable miscommunications. I burned out! So that is one area I need to toughen up in if I want to keep the budget happy! 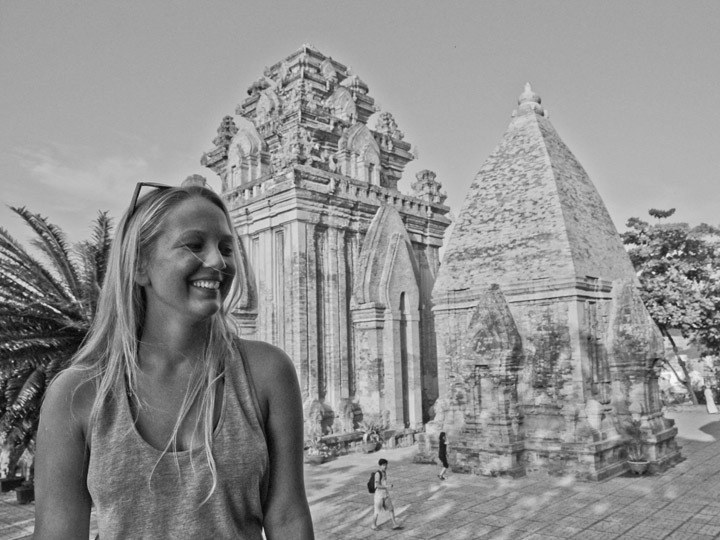 What’s Next!
The reason we rushed back to Thailand was to host my family and friends for the holidays! So there is lots of Thailand blog love to look forward to…

As always, I’m so grateful to have you all along for the journey. It means the world to me!