I can think of very few countries that inspire as passionately varied reactions from travelers as Vietnam does. Its fans wax poetic about the breathtaking landscape, the intriguing culture and the resilient population. Its detractors spew bitterly about the traffic, the crime, and most of all: the unfriendly people.

I’m fascinated by this. What is it about Vietnam that sparks these reactions? It’s not just anecdotal, either. Take a look at these statistics on numbers on international tourists (Source: Each country’s tourism board. All figures are from 2009 unless noted, the most recent year statistics are available for most countries).

For two countries so close together and with so much coastline, there is a staggering difference between Thailand’s 14 million visitors and Vietnam’s 3.7 million. Yet, Vietnam brings in more visitor’s than neighbor Cambodia, who boasts the bucket-list destination of Angkor Wat. But here is what I find to be the most interesting statistic of all: Vietnam has a return rate of just 5% compared to Thailand’s impressive 55%. (Source: The Economist) What is keeping the vast majority of Vietnam’s visitors from returning? 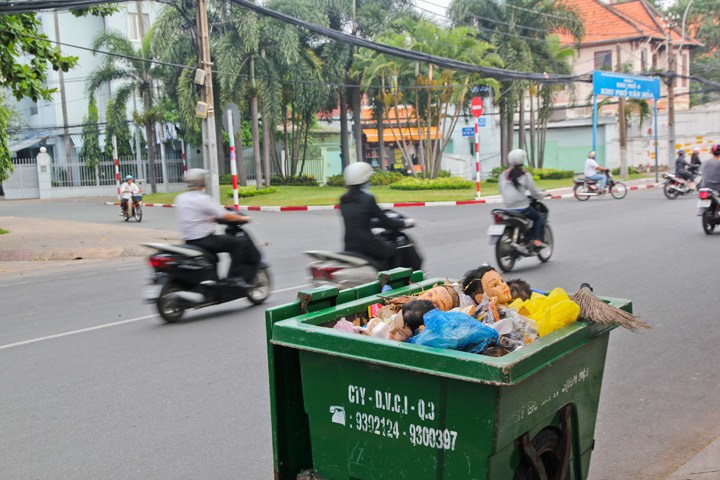 Since that isn’t the kind of thing that Vietnam’s tourism board is going to gather data on, I only have my own experience to report. And it isn’t all pretty.

I’ll start off  by saying I had a lot of fun times in Vietnam, and I saw some of the most beautiful vistas I have laid eyes on. I have plans to return and see the North. But if I had a gun held to my head and had to confess my least favorite country, Vietnam would have that honor. It’s hard to articulate, in the grand scheme of things, why. I made it no secret that I loathed Saigon. But a whole country? That’s a bit harder to be so adamant about. So let me share a few anecdotes.

It took me a few moments to unfold myself from the six hour mini-van ride we had taken, against our will, from Dalat to Mui Ne. We didn’t bat an eye when the mini-van came to fetch us from our Dalat hotel, as it is common practice for these to deposit you at the main bus stations. And of course we had paid for and been promised a normal, human-sized bus. Despite being smacked in the face with the reality of Vietnam several times, we were still under the impression that this entitled us to a normal, human-sized bus. Ha!

We collected more and more passengers, squeezing into acrobatic shapes in order to accommodate the luggage and people teeming into the tiny vehicle. I tried to fight back claustrophobia while wondering how much further the bus station could be. Once we hit highway and I realized this would be my prison for the next 5+ hours, I nearly burst into tears. Except my face was shoved into someone’s shoulder, so that deterred me a bit.

So, we had four people to a three person seat and then the last poor suckers to embark sitting on stools in the “aisle.” The couple shoulder-to-shoulder with us had it worst of all, as the luggage was so overstuffed into the trunk that it wouldn’t allow the seat to lock into place, forcing them to sit at a 45 degree angle the entire journey. And off we went, with the van boiling from recycled air and lack of air-conditioning and bouncing around the road with absolutely no respect for the human bladder. I remember thinking: Vietnam, you got us again. You son of a bitch.

Vietnamese transportation brought me to tears on more than one occasion. And before you accuse me of being a fussy princess who can’t take a little discomfort, let me assure you my complaints have nothing to do with comfort standards. Returning from my first trip to Cambodia in 2009, I had happy memories of buses with cracked windshields, no suspension, a constantly blaring horn and equally loud Khmer pop music videos playing. I found it charming. Here’s the difference in Vietnam: It was all so mean-spirited. In addition to the scam we were subjected to above, we took three other long distance bus rides. In all three, we paid for a bus with a bathroom. In all three, the driver locked the bathroom, presumably so he wouldn’t have to clean in. In two, the driver laughed in my face when I pleaded with them to let me in so I wouldn’t have an accident. I was in physical pain bouncing around in a bus with no suspension because the bus driver was too lazy to do his own job. This made me verge on homicidal. When I return to Vietnam I will travel exclusively by train. 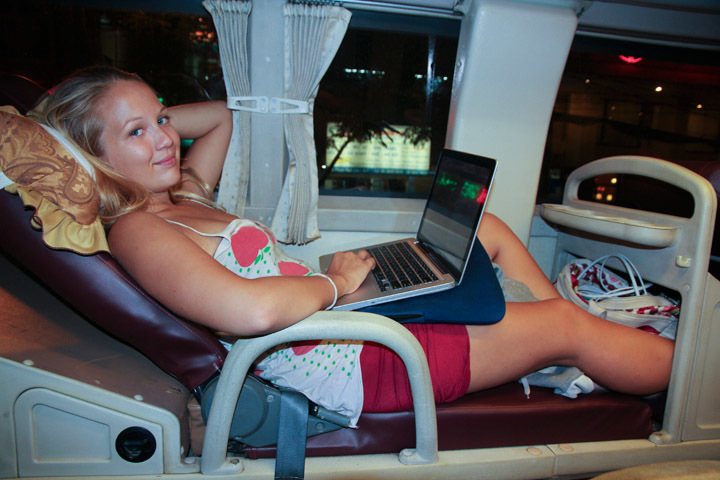 “You pay for parking.” He held up enough fingers to indicate that we owed five thousand dong. “There is a sign literally behind you that says parking is free,” Mark said incredulously. The man shook his head and pointed to the portion of the sign that said 5 thousand dong… for car parking. We are driving a motorcycle, which remains as free as it was five minutes ago. “Sir. There is a line for line English translation of that sign. I’m starting to doubt you are even an employee here. Good day!”

Scams happen all across South East Asia. But never have I seen them executed with the same fervor that there was in Vietnam. Parking was a particular recurring issue, but really that was just the beginning. Police invented fake fines to extract bribes, admission was charged by random families with a card table set up outside waterfalls, and bait-and-switch tours and transportation were rampant. It was exhausting to have our guard up constantly. And it wasn’t just elaborate scams — simple robberies seemed to take place on an unheard of level. Almost each day brought a new tale of violent bag snatching or pickpocketing.

One scam we were victim of twice happened at spas. Both times after paying for a massage (one turned out to be in a happy-ending parlor, but that’s another icky story) the masseuse would come back into the room with a sheet of paper asking you to “evaluate” her — and pledge a tip. Tipping is not common in Asia and in the ten million massages I have had in Thailand not once has a tip been expected, let alone solicited. When I expressed discomfort with the whole thing and refused to write an amount, they claimed they weren’t paid at all and worked solely for tips. The whole thing was so stressful and uncomfortable it negated the point of getting a massage at all! I left raging mad both times. 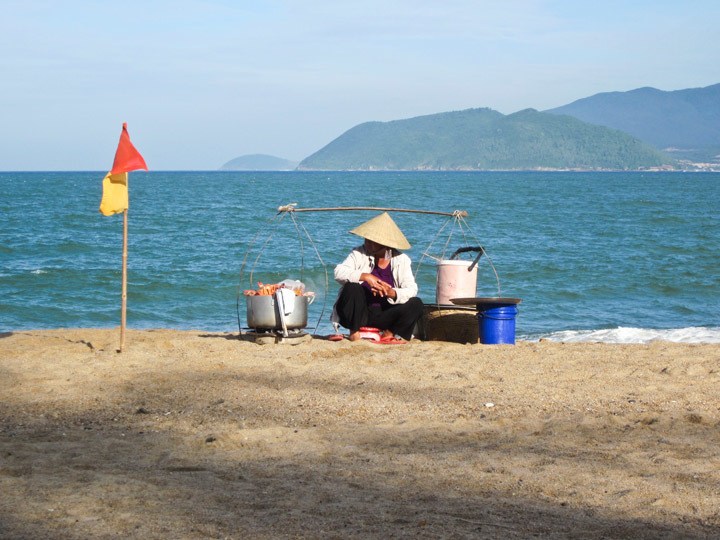 The Market in Dalat was like any other I had been to in Asia, swirling with colors and people. As usual I had my camera in hand, ready to shoot when the moment struck. I noticed an enormous cauldron of soup being stirred at a food stall. I saw the photo in my head. I made eye contact with the woman running the stall, and raised my eyebrows and my camera slightly while nodding towards the soup in the universal gesture for “May I take a photo?” “NO NO NO!” she spat back, so aggressively that I stumbled backwards in response.

Never have I felt quite so unwanted in a new country. I experienced something similar working in Grand Cayman, where locals were reserved and a bit uptight, but nothing on the same level as Vietnam. I feel hesitant to share these thoughts because I don’t want to generalize or say something so harsh about an entire country, but this was my experience. It’s not something I say lightly. Of course I met friendly and warm people in Vietnam. Unfortunately, for every one pleasant encounter I had, there were two negative ones to follow it. People laughed at us meanly, stared at us wearily, ignored us completely, and did little to disguise their contempt for us. I felt thousands of miles from “the land of smiles” (Thailand’s ingenious slogan). 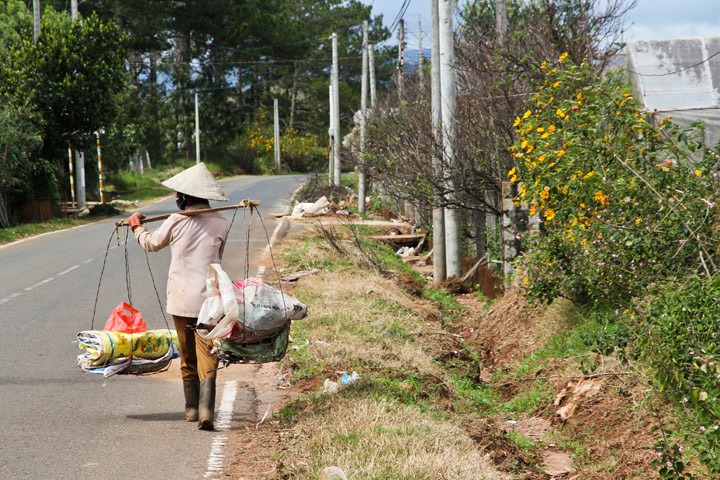 The worst part of all? Instead of feeling indignant about our treatment as guests in a new country, I felt guilty. My immediate reaction was: How else could I expect to be treated, considering the atrocities my own country has committed against this one? But intellectually, I don’t think it’s as simple as that. As my friend Matt put it, as a Jewish person does he have a free pass to be rude to German tourists in the US and make them uncomfortable? I don’t think so. But the government is going to have to make some changes if they want the public’s attitude to change. From the harsh and one-sided propaganda about the war that I saw being publicized in Vietnam, it’s no surprise that the Vietnamese react the way they do to Westerners.

And if Vietnam hopes to continue to derive a large part of their national income from tourism, I think they have a public relations issue to deal with right now. It is every traveler’s responsibility to be respectful and sensitive to their host country. And in exchange I believe that any country promoting international tourism should do its best to be a good host. 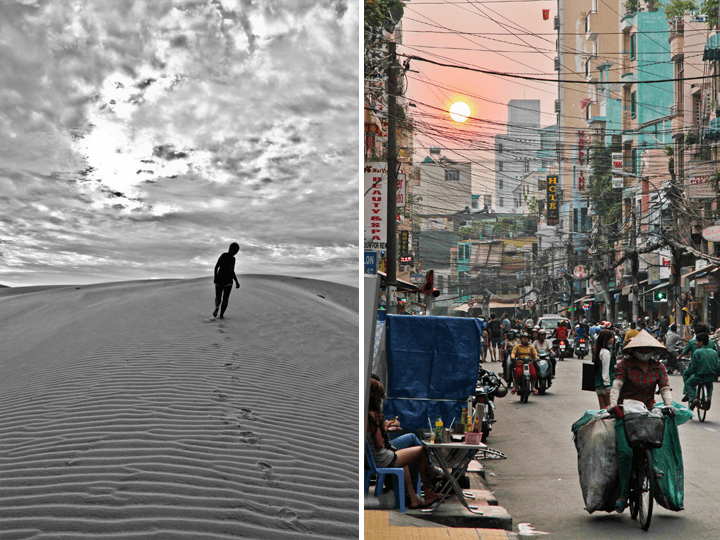 What the Future Holds

Six million people were drawn to Vietnam in 2011. Six million people came to learn, to bear witness, and to enjoy. Statistically, only 180,000 of them will enjoy themselves enough to return. People return to Thailand year after year because it’s effortless to enjoy. And I think they fall for Cambodia and Laos because despite the difficulties of travel there, they win you over with charm and heart. I think Vietnam has a long way to go if it wants to gain a reputation as a tourism superstar. First of all, it’s got to find some heart.

Have you traveled to Vietnam? What was your experience there?

Happy Birthday to my Number One Travel Buddy

Aswan, we adore you 🐊 Rainbow-splashed Aswan i

Living Luxor-iously 🙌🏼 We were so excited t