This post is super long. Read it anyway. If your attention span is short, skip ahead to My Reactions.

For many people in this world, “Vietnam” is the name of a war and not a tourist destination. I’m ashamed to say I knew very little about the Vietnam War (or what the Vietnamese call the American War) before I arrived in the country. I know that it is something I was taught about in high school, but unfortunately that information was not retained in my brain, which at the time was probably busy trying to con my parents into extending my curfew.

Today, visitors to Vietnam can learn about the war not just from the history section in their guidebooks but also from a number of “war tourism” destinations around the country. Many of the sights we visited were heartbreaking and led me further into an identity crisis I was developing as an American in Vietnam. Other times, the propaganda and anti-American sentiment oozing out were so strong they made me a bit defensive against this communist country. Either way, it was an emotional journey.

The Reunification Palace was once the symbol of the South Vietnamese government (which, for people as clueless as I was, was the side the Americans were fighting on). Readers of my parents generation may recall seeing images in 1975 of communist tanks crashing through the wrought iron gates of what was then the Presidential Palace, marking the end of the Vietnam War. 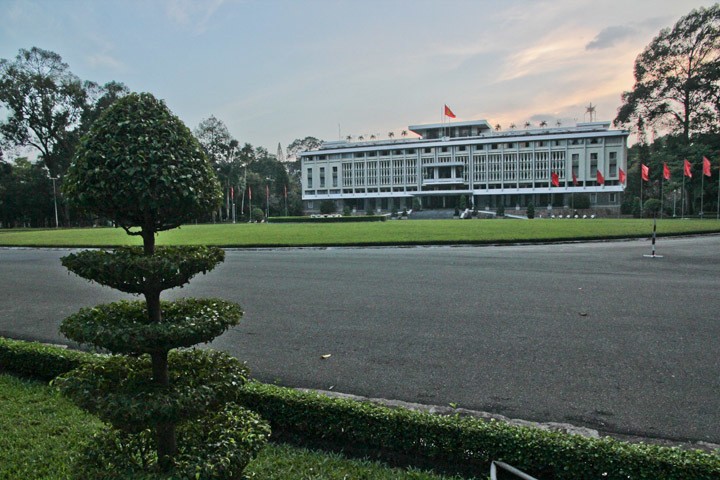 As we were waiting at the entrance for enough English speakers to gather in order to start our free tour, we read in our guidebook the history and background of the palace, which dates back to 1868. The drama that went on behind these walls from the moment it was built until that fateful day of April 30th, 1975 is well worthy of a soap opera. 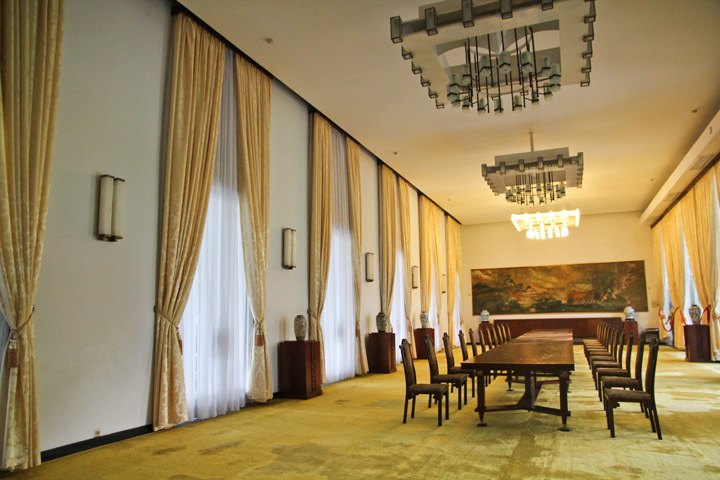 As our free tour began, we immediately picked up on the discrepancies between what Lonely Planet had just told us and what our soft spoken Vietnamese guide was stating. Where the guidebook had used terms like “the fall of Saigon,” this woman was using terms like “the reunification of Vietnam.” Where the book said “invaded,” she said “liberated.” As in, the North came and “liberated” South Vietnam from the Americans. 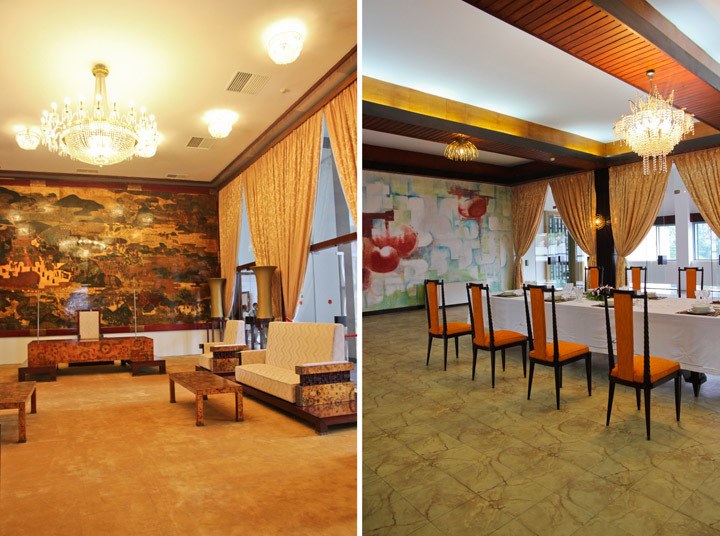 Granted, my limited knowledge of the Vietnamese War up until now had come from faint memories from high school history class, the movie Apocalypse Now, and an Australian published guidebook. (Did you know Australia deployed nearly 8,000 troops to Vietnam and lost over 500 men? I didn’t.) But from my understanding, the Americans were fighting alongside the South Vietnamese. So, doesn’t it make more sense that I am wrong and this Vietnamese woman is right? Considering Vietnam is a communist country without freedom of press and rampant propaganda, things aren’t so clear-cut. 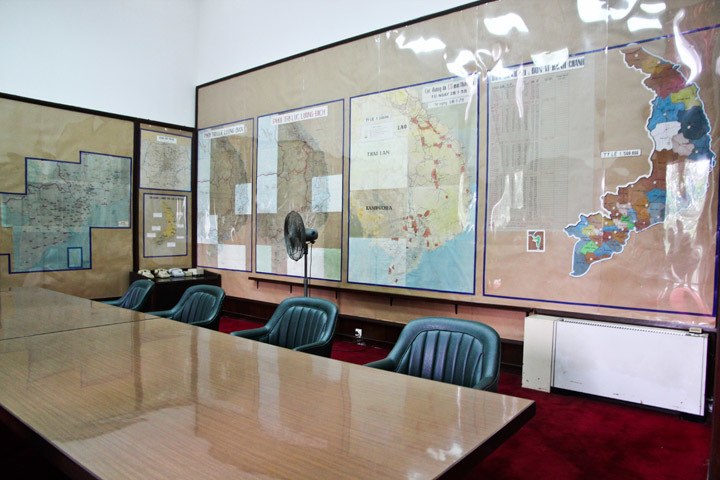 Despite my misgivings over the information we were being fed throughout our tour, the palace was beautiful. The telecommunications center, with it’s bomb center, map room, war room, and endless network of tunnels, was particularly fascinating. The building is a stunning example of 1960’s architecture, it’s design and decor reflecting the harsh and modern Saigon I had begun to know. 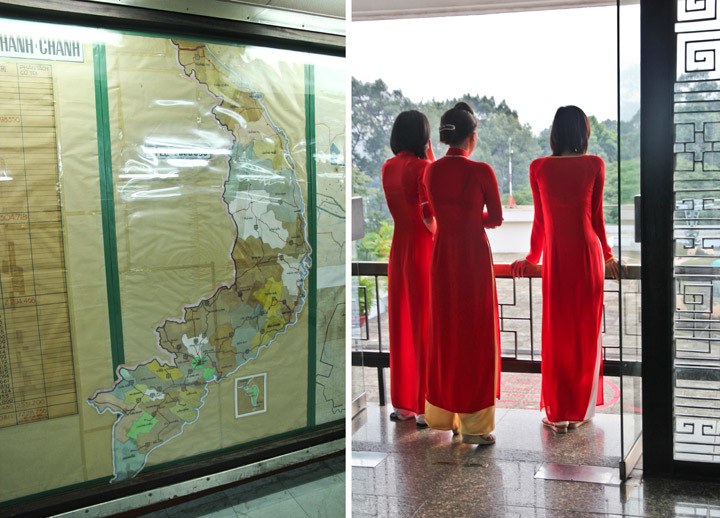 The Cu Chi Tunnels are an extremely popular half-day tour out of Saigon. For $6, we were bused out of the city into a rural area that has been called “the most bombed, gassed, defoliated, and generally devastated area in the history of warfare.”

The Cu Chi Tunnels are comprised of a network of more than 155 miles of underground tunnel stretching from the South Vietnamese capital to the border of Cambodia. The tunnels were built and controlled by the North Vietnamese, who were able to live and wage war from, quite literally, underneath the American troops. 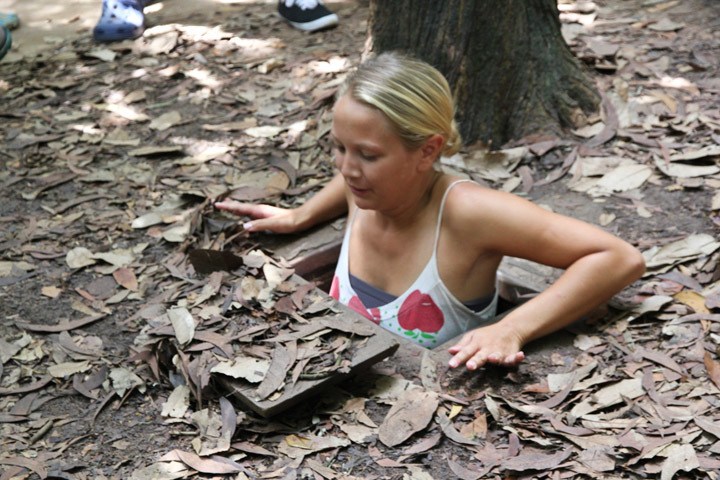 Today, the tunnels are extremely popular with both international and domestic tourists who come to learn  about the horrors of guerrilla warfare and to try to understand the dedication and tenacity that would allow a person to spend years, in some case their entire lives, living in dark, damp, vermin infested crawlspaces. Usually, daylight hours were spent in the tunnels resting and working and nightfall was spent carrying out attacks and gathering food. When raids were going on, the Viet Cong would often remain inside the tunnels for days at a time. The stories of how the Viet Cong lived and the ingenuity they used to retain control of the area were fascinating.

The tunnels were hell on Earth for American troops who dreaded being send into them on missions. In order to conceal and protect tunnel entrances, the area was rife with vicious booby traps. Cu Chi became a sore point for the American military who, despite incessant attacks, was never able to remove the Viet Cong presence from the tunnels. 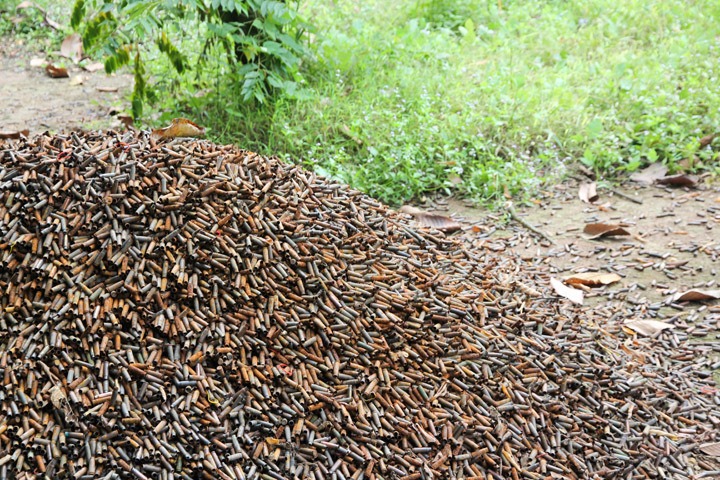 Unfortunately the site often seemed a bit like a tourist circus, from the massive tour groups (one of which we were part of) to the on-site shooting range. I had extremely mixed feelings about taking part in the shooting range, all things considered, but ended up trying the last two shots from Mark’s round.

The actual walk through the tunnels was saved for last. They are still unlit and fairly claustrophobic, though in fact they have been enlarged nearly 50% to accommodate tourists. I was pretty uncomfortable even given the safe environment we were in. I simply can’t imagine spending my life in a crawl space the way so many did. 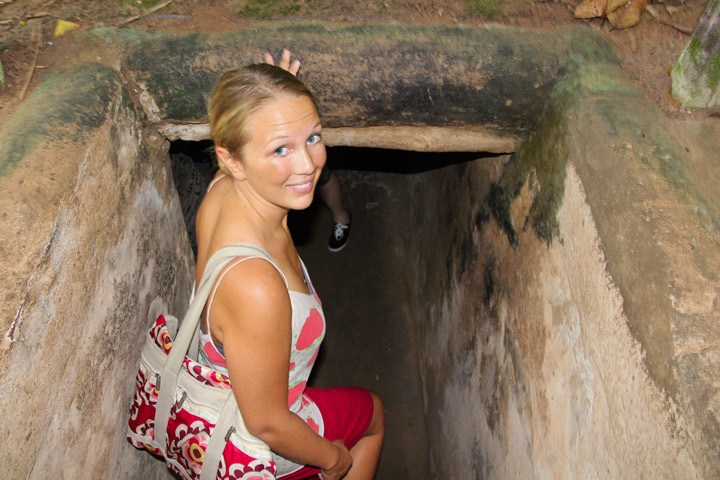 The Cu Chi Tunnels had a strong anti-American sentiment. A video we watched before departing saluted the many “American killers” that lived in the tunnels and proudly boasted about their “American killing” and did I mention they used variation of the term “American killer” about twelve times? It was certainly a shock to hear. 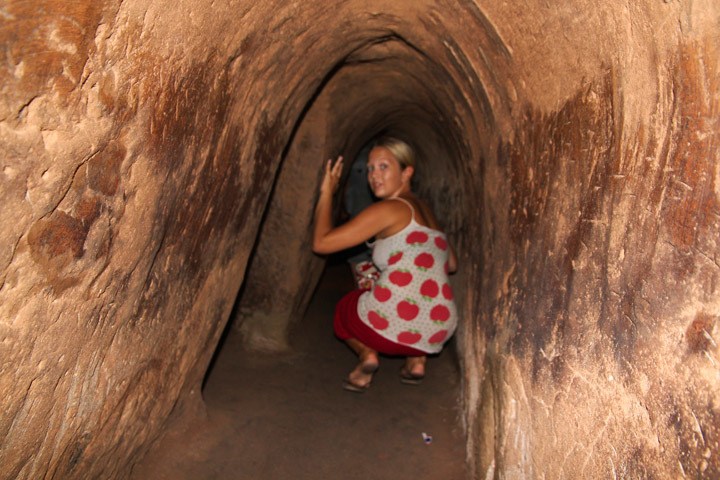 Still, I found learning about the sacrifices people were willing to make for war to be fascinating. From a tactical standpoint, the Cu Chi Tunnels may be one of the most amazing marvels of modern warfare. It’s definitely a worthwhile visit, if you can stomach the gleeful pride at the “American killing” that took place here. 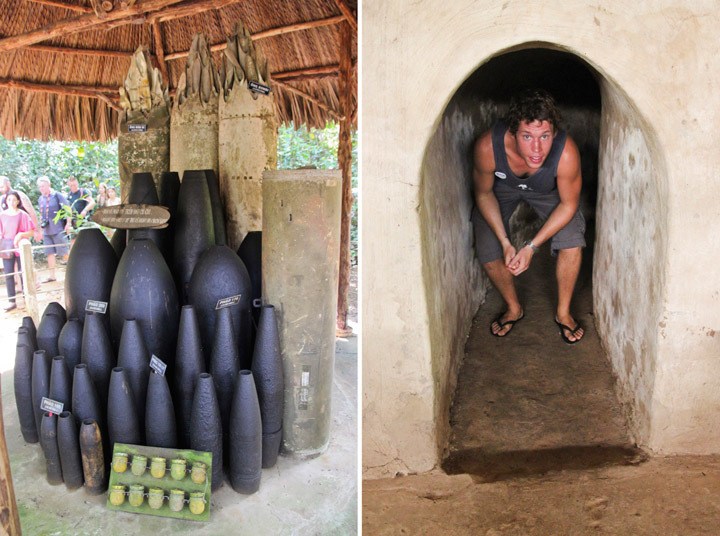 The War Remnants Museum, formerly known as the American War Crimes Museum, is the single most popular museum in Saigon. More than anywhere else we visited, it left me filled with grief and questions about how everything went so horribly wrong. 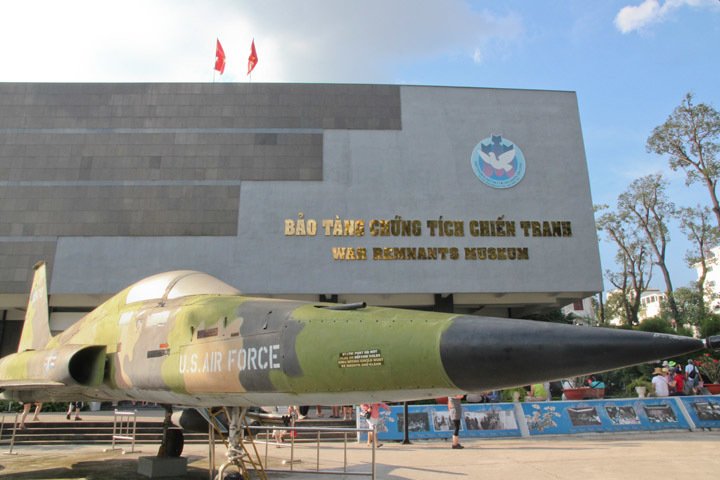 I barely raised my camera from my limp arms during my visit, which I spent mostly in a blur of tears, as I knew there was no way the images I was seeing would leave my memory anytime soon. The human suffering and in some cases, depravity, that is depicted here is on a level I’ve never seen before. The room dedicated to Agent Orange victims, still suffering today, left me outraged. However, a huge part of the story is left untold here.

There was a room dedicated to the opposition and outrage expressed around the world at America’s involvement in the Vietnam War. I only wish that it had more clearly explained that many Americans were part of that opposition as well, and that the draft sent many unwilling young American boys to their death. Or that the war divided America in a significant and lasting way.

And lastly, I wish the museum had taken time to explore the horrors of war from both sides. No war exists in a vacuum, and by putting all the blame and atrocities on one group, the museum in the end comes off very strongly smelling of propaganda. 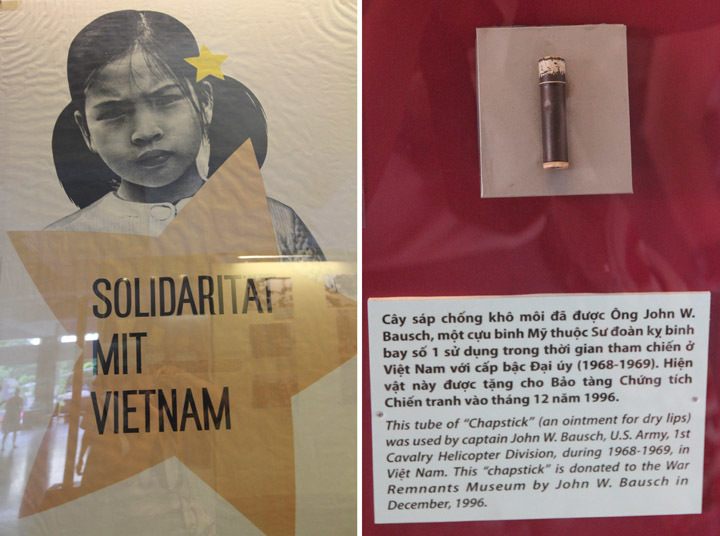 My reaction to the sites and museums we visited was extremely emotional. Half the time I found myself genuinely ill about the horror America has helped cause in Vietnam. Specifically, the short-sighted use of Agent Orange, which not only killed or maimed half a million people but has gone on to disfigure unknown generations, and poison countless food and water sources.

The other half of the time I felt an indignation boiling up at the biased and propagandized views being fed to Vietnamese nationals and international tourists. War is a two-sided hell, but the atrocities of the Viet Cong against the South and yes, against Americans, were completely absent from the discussion. But as they say, history is written by the victors.

I think most Americans would find it difficult to travel through Vietnam and not have some bit of identity crisis. I found myself thinking we had no business getting involved in the first place, while simultaneously outraged at the US’s lack of interference during the Khmer Rouge occupation of Cambodia. I found myself sympathetic to the terrorized civilians of Vietnam, while at the same time empathizing with the terrified young American soldiers, many of whom fought a war they didn’t believe in. I found myself embarrassed, and I found myself confused. Mostly, nationalities aside, I found myself mourning the fact that so many humans on this Earth suffered so deeply for so long. 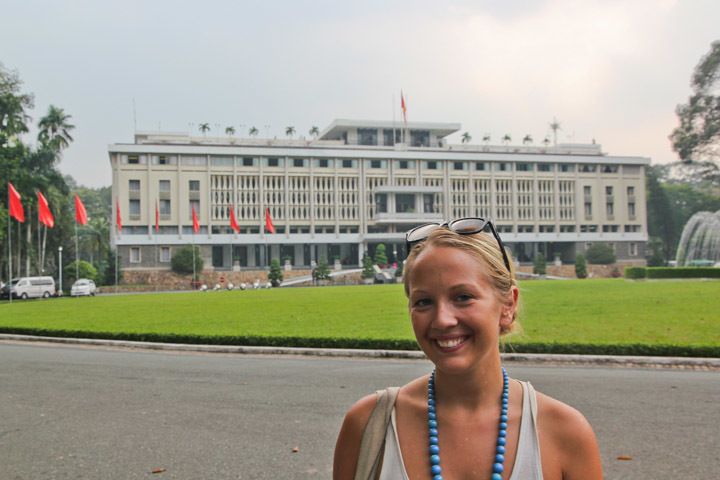 Hope for the future

Visiting Vietnam gave me a perspective on war I didn’t previously know I was missing, and made me reflect deeply on the war my country is involved in today. It seems to me that the wounds of the Vietnam (or American) War are still very fresh despite the decades that have passed. I hope as time begins to heal them we can all learn from a more balanced, two sided story of a war gone horribly wrong; and that we can move forward into the future and learn from the mistakes that were clearly made.

Welcome To Vietnam: Saigon Nearly Broke Me Happy New Year! And Photo of the Week 29
28 Comments...