After our amazing dives in underrated Cambodia, we were pretty excited to check out the similarly reviewed scuba spot of Nha Trang, Vietnam. Granted, Vietnam is well and firmly on the diving scene, mostly due to its rock-bottom certification prices. But it’s certainly not making any “Top Ten Dive Spots”  list and experienced divers tend to give diving in Vietnam mediocre reviews. 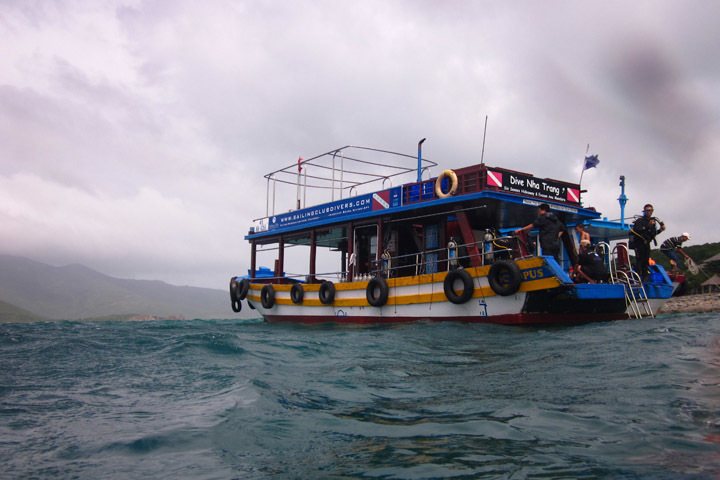 Nha Trang also has a pretty poor reputation for dive safety standards. Several dive shops have been removed from PADI (the Professional Association of Dive Instructors) and on a party boat trip around the islands, we observed first-hand why. As we were snorkeling in a bay, we observed what was easily the most reckless and ridiculous diving practice we’d ever seen (and we’ve done some fairly reckless stuff ourselves!) A “divemaster” (who I highly doubt was licensed) was taking a student on a DSD (a Discover Scuba Dive, or a try dive for uncertified prospective divers) with one set of gear and one tank of air between them.  The student was wearing the BCD (inflatable buoyancy vest), regulator (thing you breath out of) and tank, and the divemaster was wearing the fins and dragging the student by the tank around the reef. Let me count the ways in which this is dangerous:

1. There was no backup for breathing. Every diver goes down with two hoses attached to their tank so that if their buddy’s air runs out or their regulator fails, they can offer their second hose and provide air to their buddy. The divemaster was breathing out of the students alternate, meaning both hoses were being used, and in effect there was no backup should the air or either hose fail.

3. With only one set of equipment between them and the student being dragged around rather than swimming on his own, the pair was constantly bashing into the reef and killing the coral in the process. 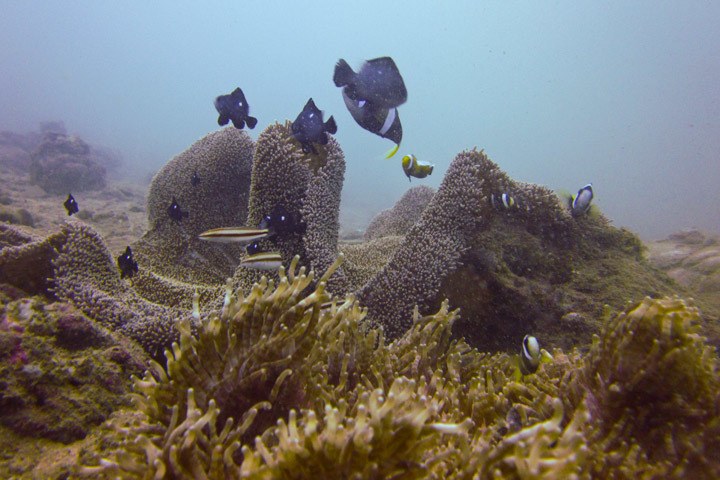 Basically, we couldn’t believe our own eyes. So when we decided to go diving a few days later, we chose our dive operator with great care. There are several reliable operators in town such as Rainbow Divers (super pricey), the shop next to Rainbow Divers (can’t remember the name, but our second choice), Angel Divers (we liked the instructor here) and our winner: Sailing Club. We chose them based on a combination of gut instinct, great price, and promises of a top-notch boat, excellent service, and access to faraway dive sites. 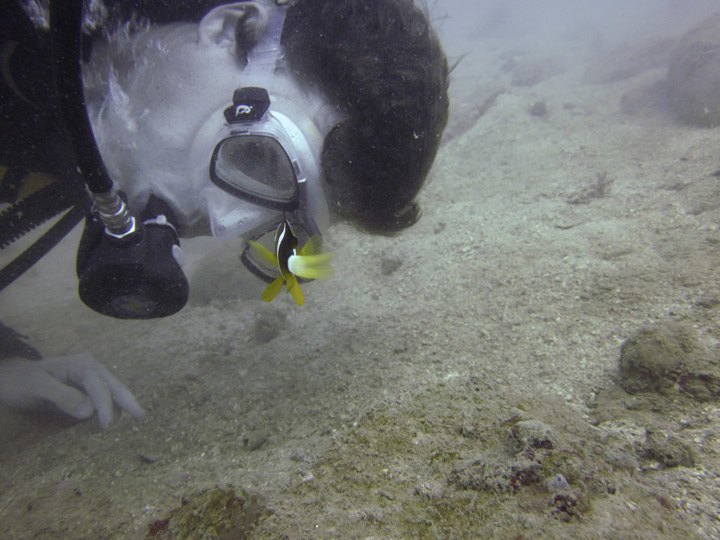 Our first dive site was South Beach. We knew that we had come at the worst time of the year for visibility due to rainy season run-off from nearby mountains, but we had high hopes. Unfortunately the water was pretty murky, (and pretty cold!) but by sticking mainly to close-up shots we were able get a few great photos from the dive, including the fantastic clownfish shot Mark snapped below. 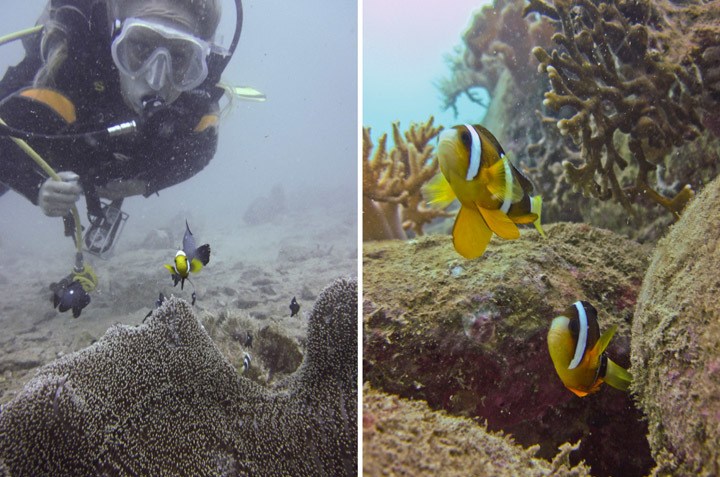 These little Nemos and friends were abundant at this dive site. Clownfish are so territorial and have such prominent personalities, they are fascinating to observe. 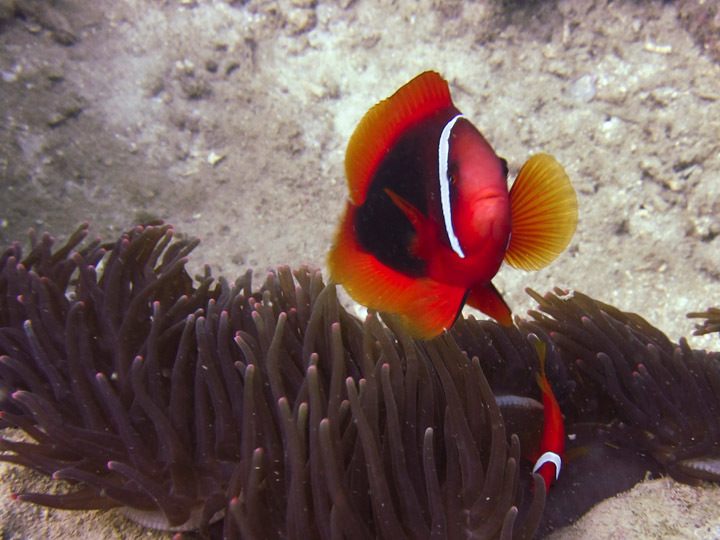 One thing I love about diving is seeing the regional variations between the same species of fish. Below are some of the “cousins” of the tropical fish that I am so accustomed to seeing in the waters of Koh Tao, Thailand. They are abundant here in Nha Trang, but seemed new and exotic to us. 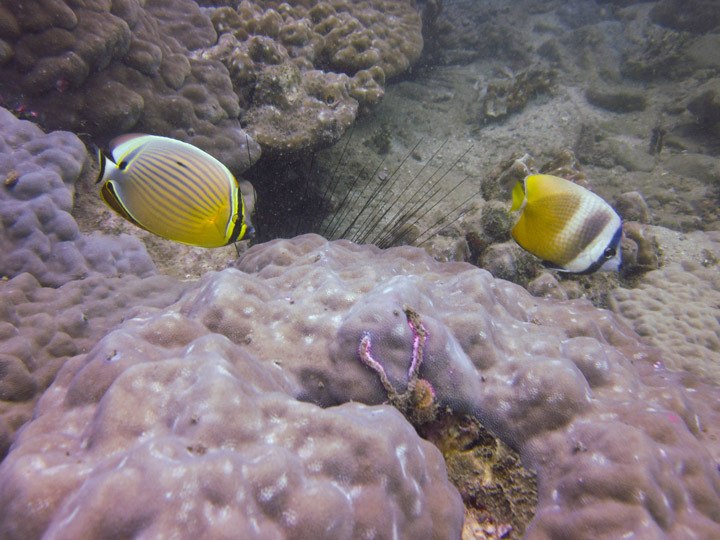 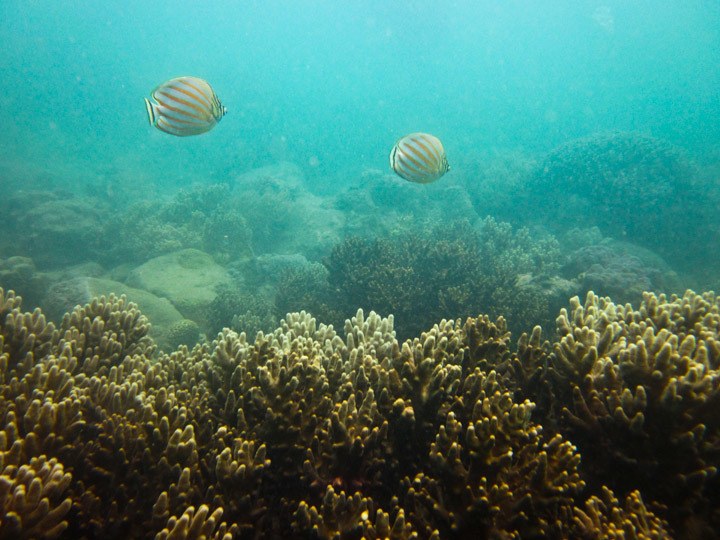 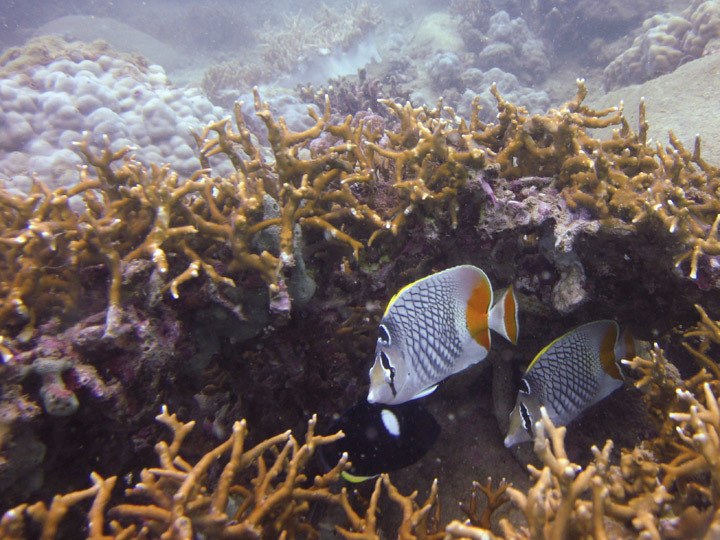 It’s also nice to see lionfish in South East Asia where they belong, and you can appreciate their beauty without all the doom-and-gloom that comes with seeing them on the other side of the world. Lionfish were accidentally introduced to the Caribbean where they are now an invasive species and more accurately, a sign of the underwater apocalypse. 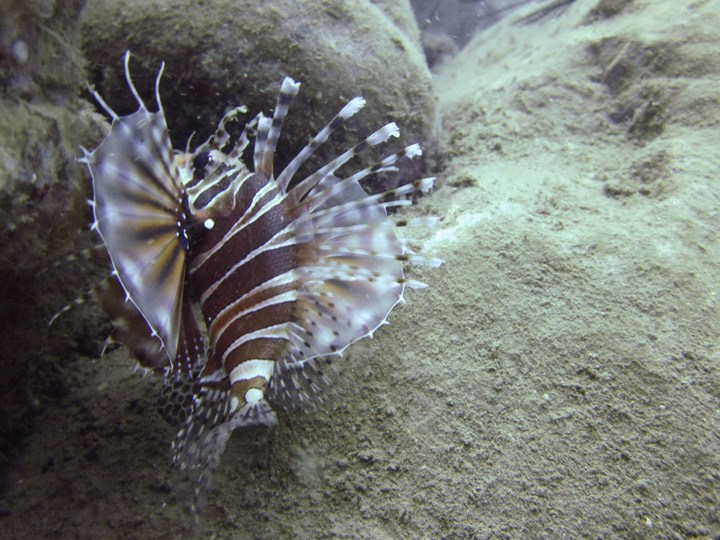 The following photos amaze me, not because they are great photography examples, sadly, but because of the subjects. On the left is what we assume is bubble coral, while on the right is the ribbon-like eggsac of a nudibranch. It looks so much like fabric that I truly thought that somehow a bit of silk had gotten entangled with the coral. 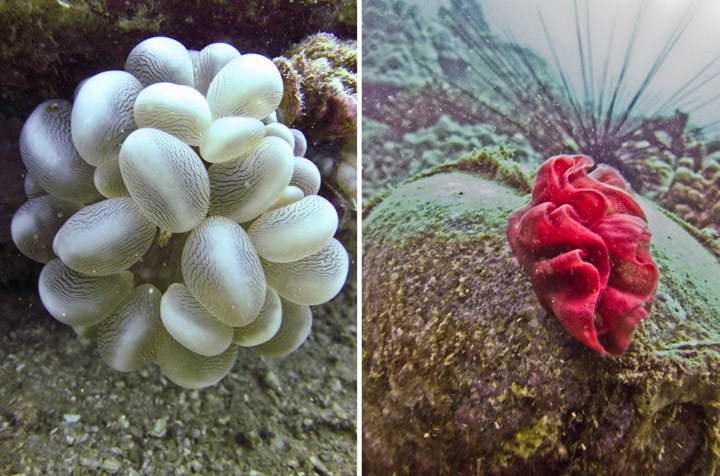 This cuttlefish was probably our best find of the day. Cuttlefish change colors to blend in with their surroundings and communicate with each other, making them difficult photography subjects. 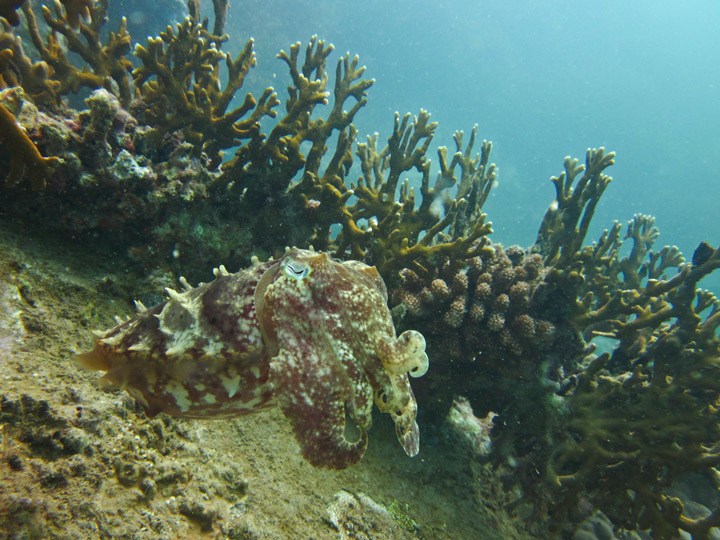 I absolutely love this shot of a crab hanging out in an anemone. As you can see, this was a “small fish” dive which meant we were training our eyes for surprises on the reef rather than looking out to the blue for huge schools of fish, sharks, manta rays, and whale sharks. But sometimes those “small fish” dives are just as rewarding. 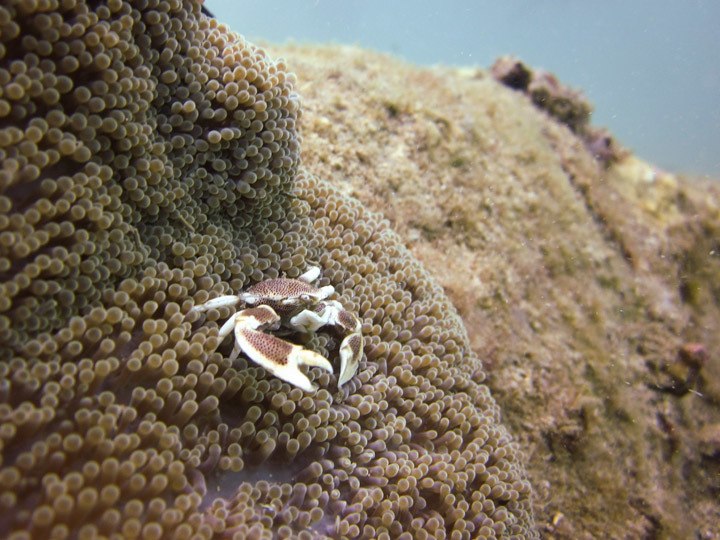 Our second stop of the day was at Moray Beach dive site, known for it’s healthy hard and soft corals. 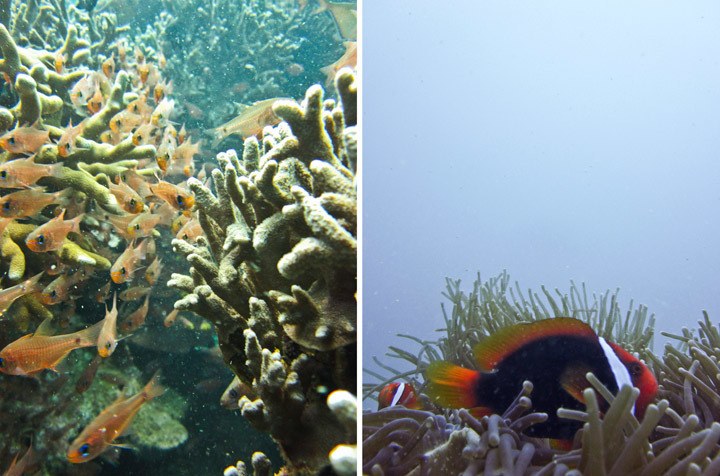 Moray Beach deserves it’s reputation as these were some of the healthiest and most colorful corals I’ve seen in a while. 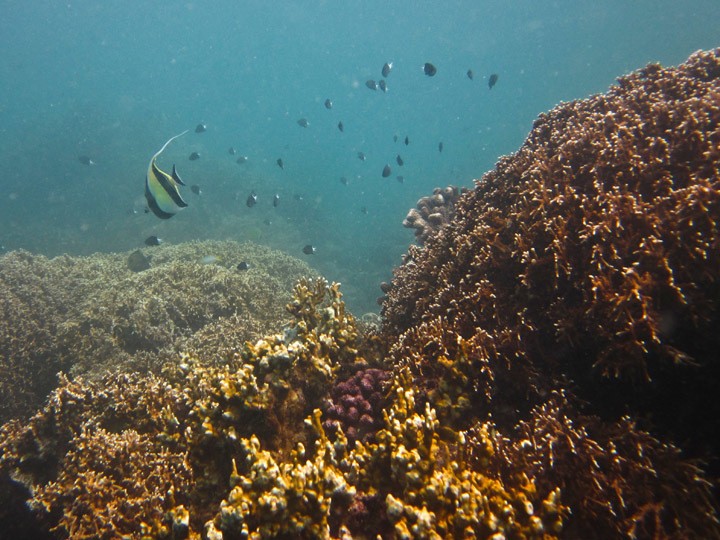 Look at the size of the table coral Mark is swimming over! Oh, and I just couldn’t get enough of the moorish idol on the right, my favorite fish of the day. 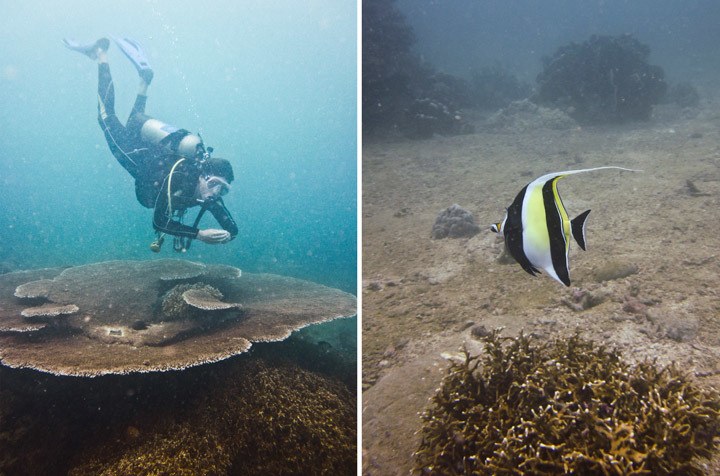 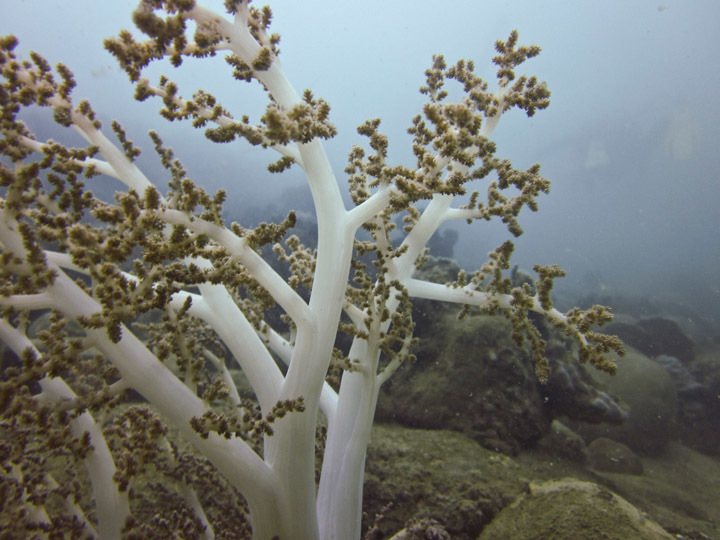 Just as we were about to ascend at the end of the dive, our divemaster spotted a shy octopus hiding out in the coral. Though we could only see a bit of him, we could tell he was huge! It was a great rare daytime find to end the dive on. 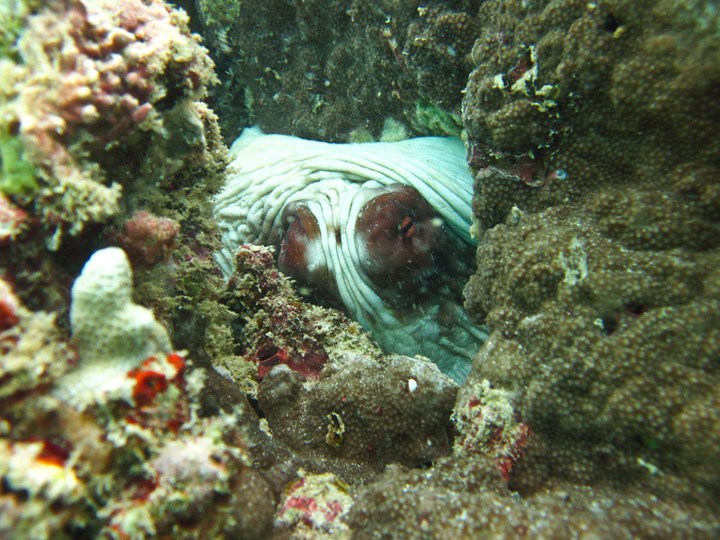 In the end I was happy with Sailing Club. We were a bit disappointed with the dive sites as they were crowded and we didn’t “leave the dive site if it was crowded with other boats already” as promised, probably because there were uncertified divers on-board who needed to be catered to. However, the boat was the best one I saw out on the water, the lunch was fantastic, and the service was amazing: my gear was set up for me and stripped off me the second I exited the water. And from the logo-emblazoned mini-bus that transported us to the dock to the super thorough dive briefing, this was one of the most professional organizations I’ve dove with. And all for the rock-bottom price of $40, all-inclusive. 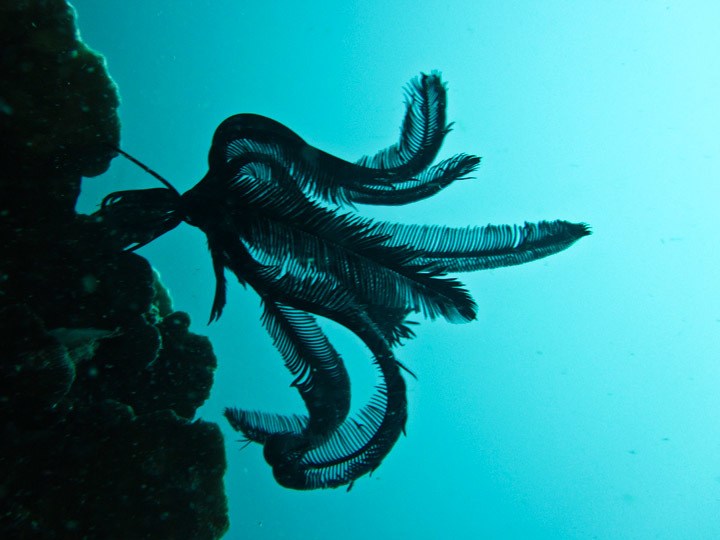 At that price, if you come to Nha Trang, you must try diving in Vietnam. What have you got to lose?

Becoming a Divemaster: Conclusion and Advice

From Virgin Snorkelers to Diving in 3 Days Flat!