We woke up on day two of our diving trip with Island Divers to the sounds of the ocean and the feel of the breeze blowing up between the floorboards of our over-the-pier dorm. 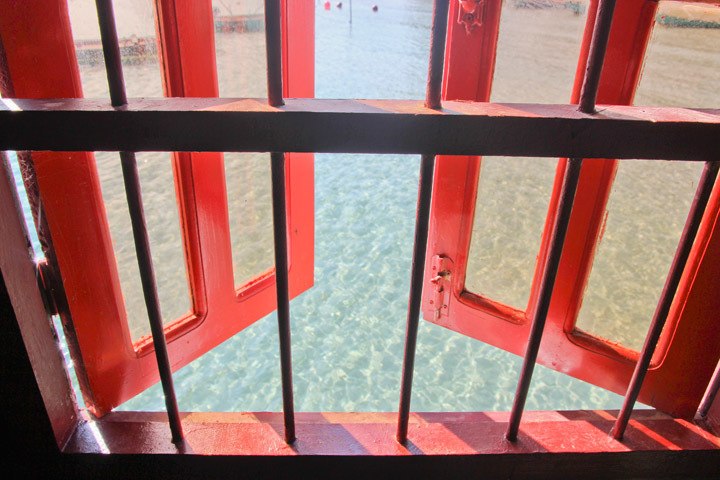 Koh Rong Samlom was stirring to life, and the village hummed with activity.

While we were slightly bummed over our lackluster experience with our first dive, we were tentatively excited for what was to come. We really wanted to see the things diving in Cambodia is positively known for, like nudibranches and seahorses. So we asked one of the seahorse experts from Marine Conservation Cambodia (MCC) to tag along with us and help us find one of these hard-to-spot creatures. Seahorses can be as small as a thumbnail and are extremely well camouflaged, so if you don’t know where to look you are likely to end up disappointed. To our delight, he said yes. 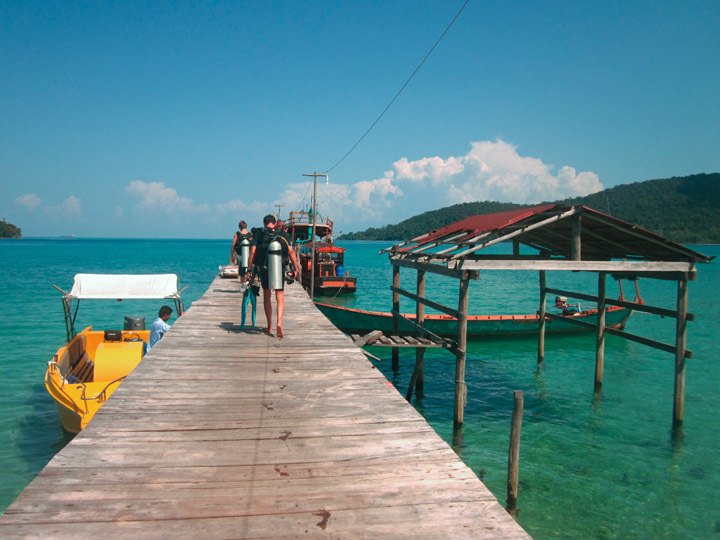 We were off to a divesite called “The Corral” which is basically just an enormously large, shallow, sandy area that is home to high numbers of interesting marine life, including the diver favorite- the elusive seahorse. Clever naming, yes? (A corral is a home for horses, for those of you who didn’t have childhood equestrian obsessions). This is also one of the first sites in Cambodia to be protected, thanks to the work of MCC. 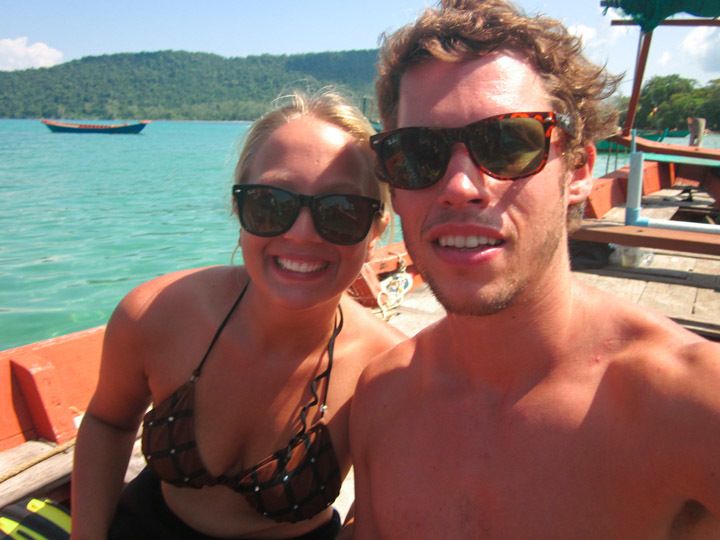 Descending a few meters into sand lacks the drama and excitement of flying down an underwater wall or into a blue hole. But almost immediately, I spotted one of my favorite out-of-this-world creatures, the flounder, and I knew this was going to be fun. 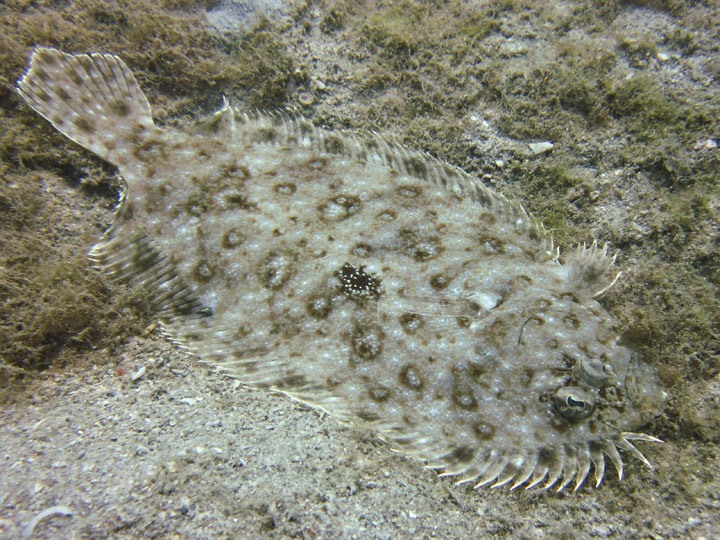 Look at that smooshed up face! I can’t get enough of these guys.

Seconds later we came across a vibrant horned starfish. It was one of the most colorful I’ve ever seen. 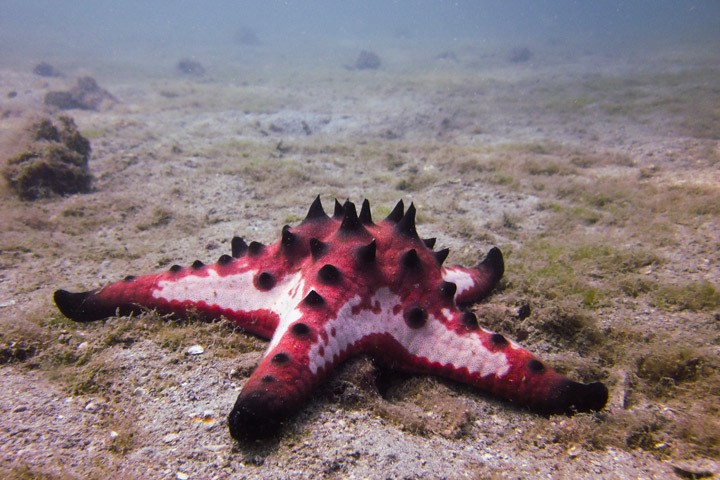 Since there were no coral structures or other topographical clues to follow, we simply went hunting through the sand in whatever direction we pleased. It was a sand safari. And our next find was one of the craziest things I’ve ever laid eyes on: an Indian Walkman, or Devil Stinger, that appeared to us to be an albino. This is a very venomous species, so obviously I decided to take an extremely close up photo. 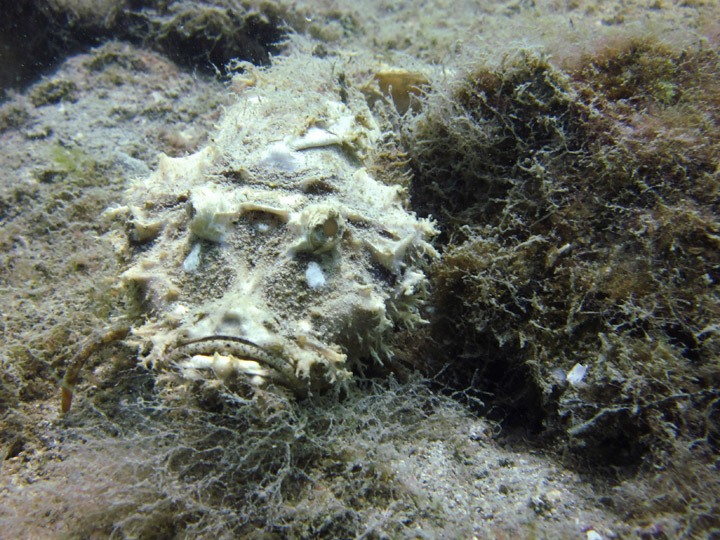 Our next spot was on of the area’s claim’s to fame: an extraterrestrial looking nudibranch. These slug-like creatures come in many forms, and this one was totally new to me. 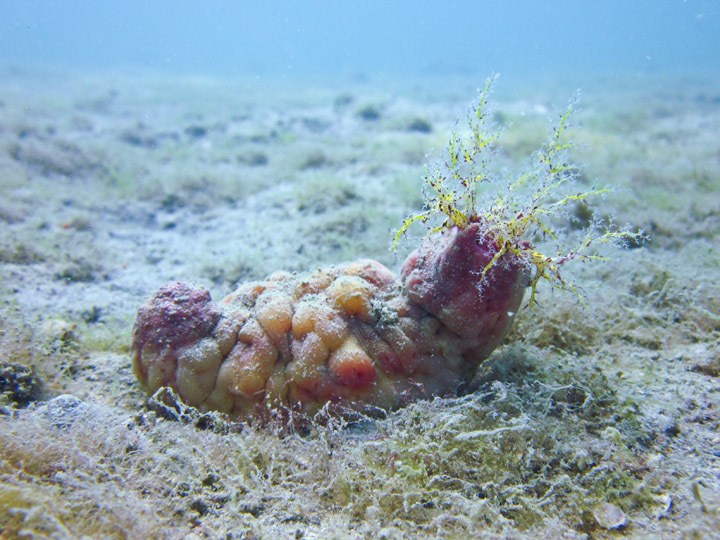 If we had called the dive at that moment it already would have been a success. I had to remind myself to keep checking my air and time because I just so giddy with excitement at being underwater in a way I can’t remember being in a long time.

I almost swam right over this nine-armed starfish. 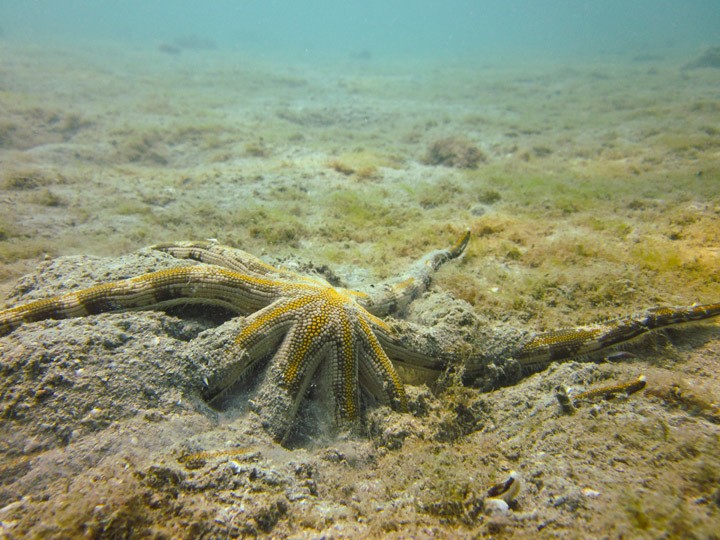 When I stopped to take a photo of the dramatically lit scene, the subject got a bit camera shy and went flying across the sea floor faster than I have ever seen a starfish move. It was incredible! 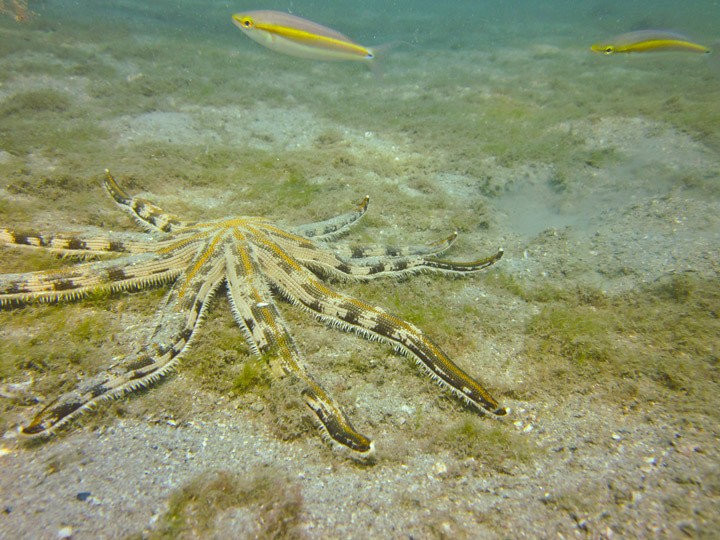 Not long after, we spotted the juvenile version of the adult we had just seen. Look how tiny it is compared to my finger! 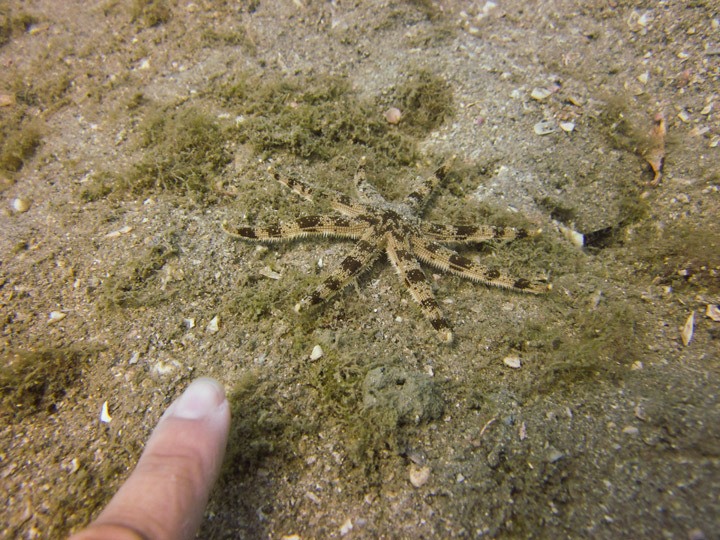 Mark and I were constantly banging our tanks trying to get each other’s attention over a new discovery. A new seastar! A new fish!  A new nudibranch! 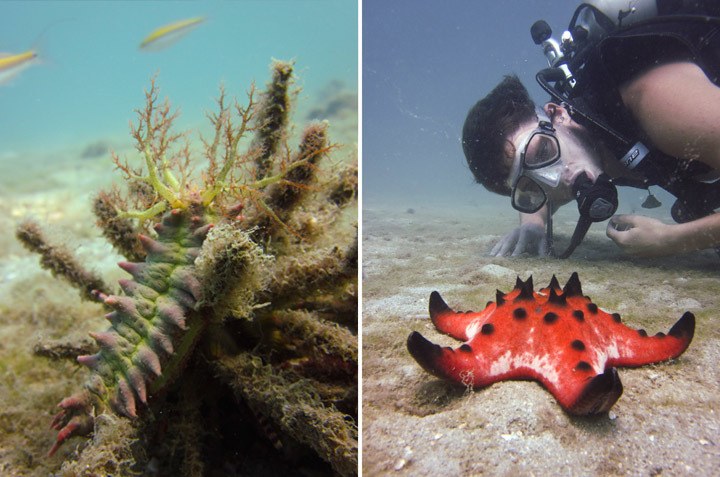 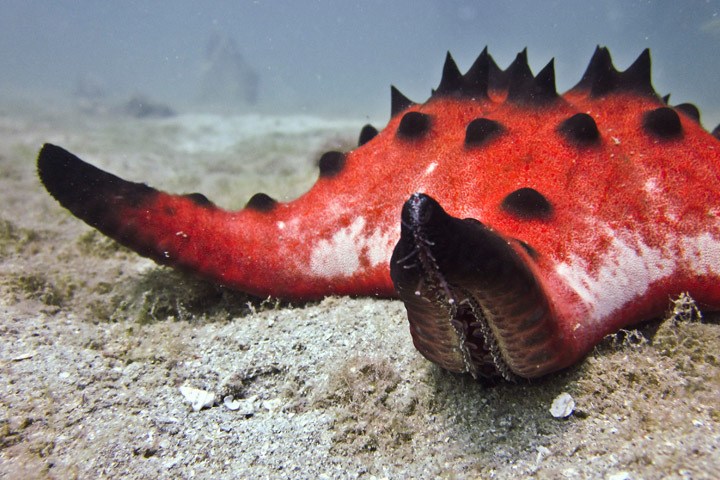 In fact, I was starting to forget our main objective for this sandy dive when our friend from Marine Conservation Cambodia signaled us over excitedly. There is no way I would have spotted this seahorse on my own. This dive was  quickly becoming one of the best of my year and it wasn’t over yet. 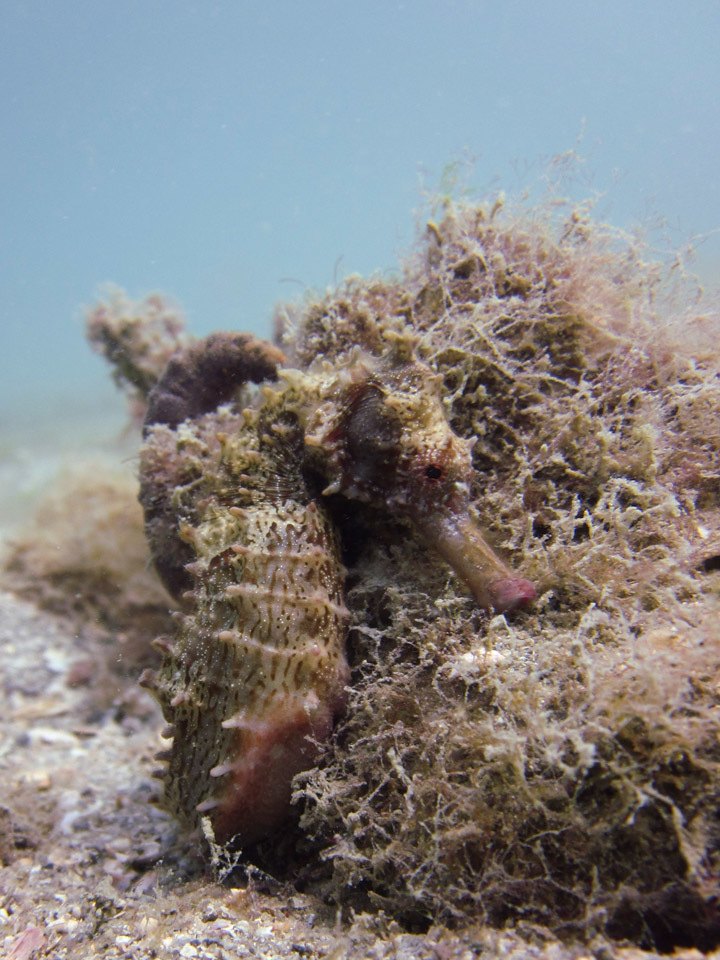 While we were mostly focused on and excited by the more unusual forms of marine life, there were also some good old fashioned fish kicking around. 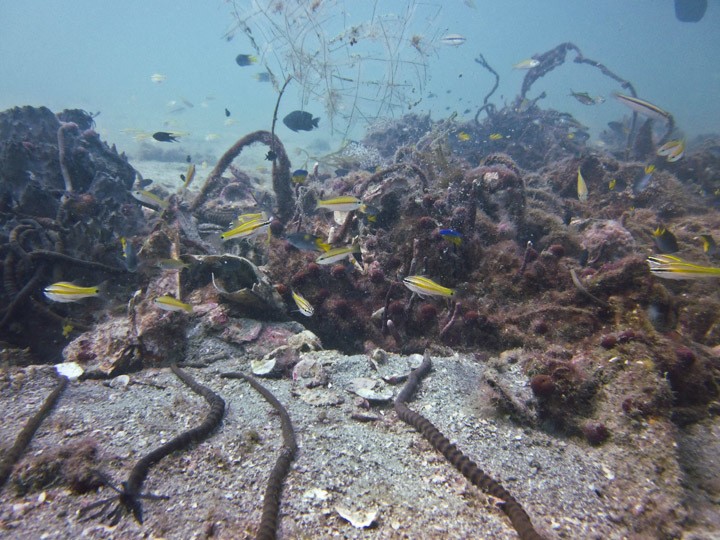 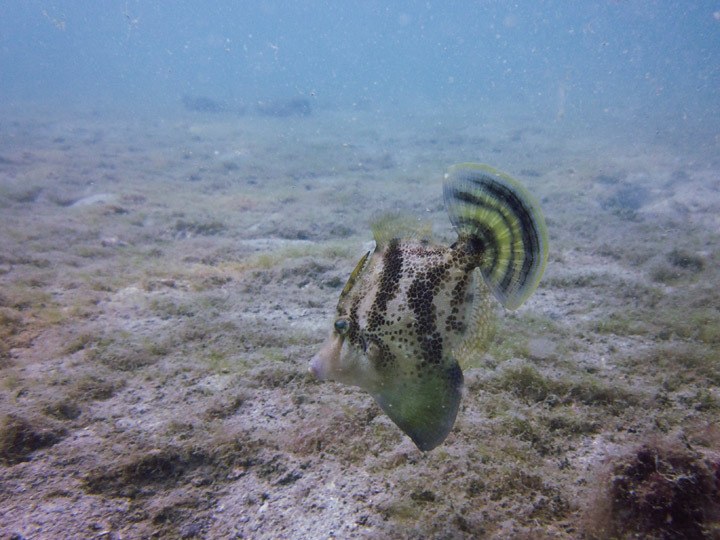 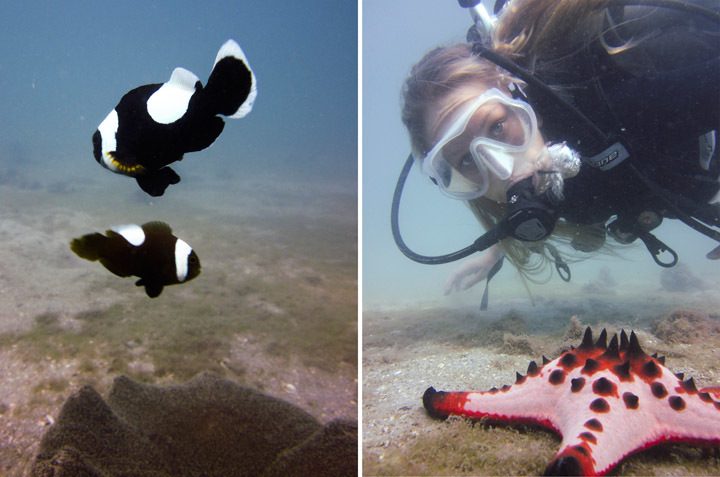 I’m sad to say I can’t claim credit for this amazing shot of a transparent Anemone Shrimp, but alas, the camera was in Mark’s hands. 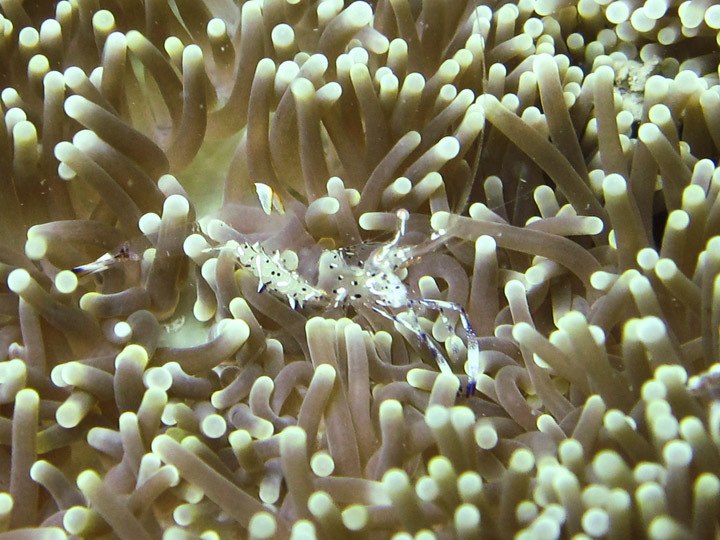 What follows is the sole example of marine debris that I saw on this dive. I must say, as far as marine debris goes, it’s fairly appropriate, no? The little fish seems to like it anyway. 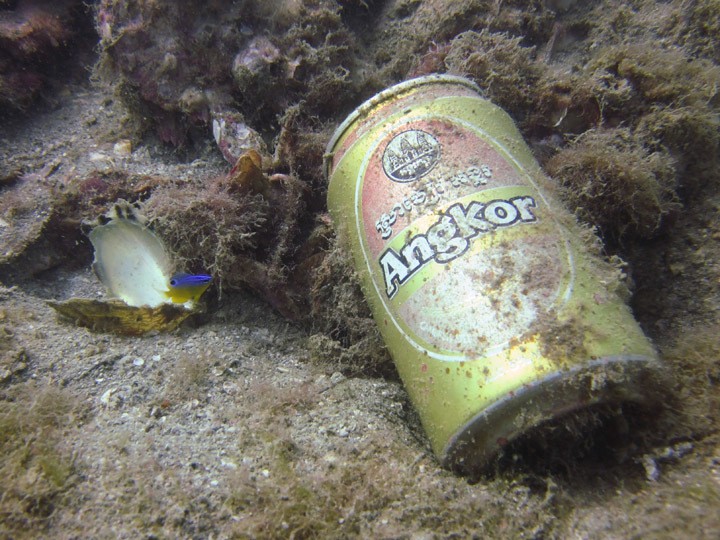 Just as Mark signaled to me that he was low on air, a trevally the size of a human came out of no where and zoomed around us nervously. He was about a hundred times the size of anything we had seen on the dive so far and provided great amusement during our safety stop. 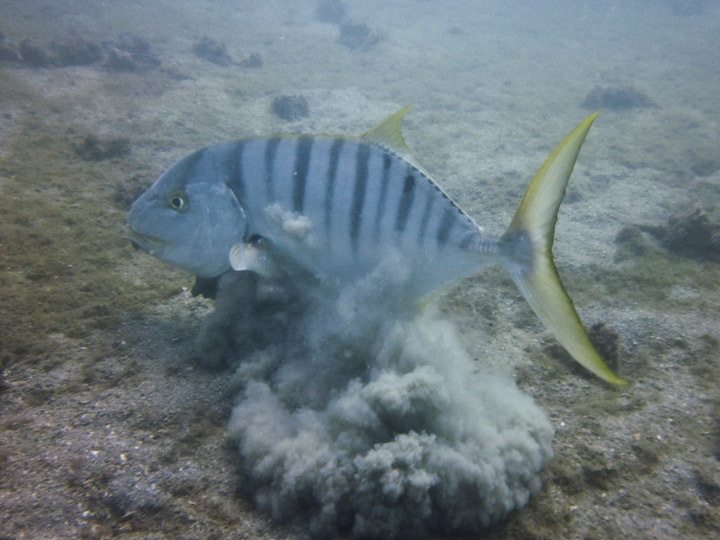 As we descended to the surface, I was smiling ear to ear. This was easily one of my top ten dives. Ever. 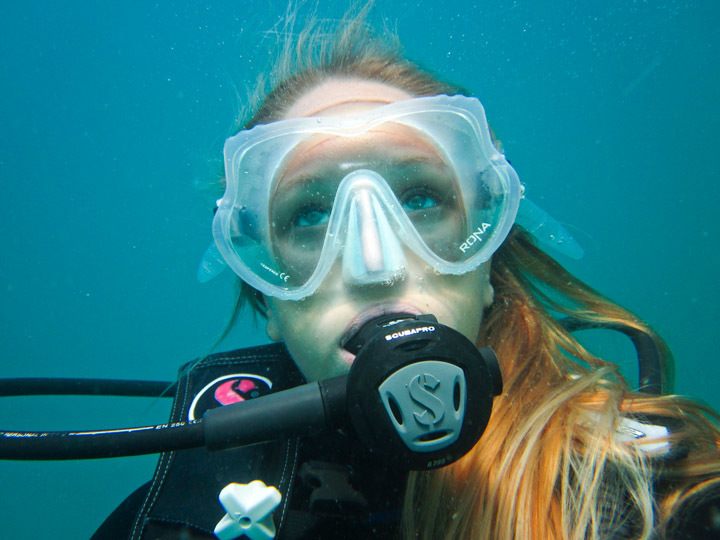 So how did Cambodia go from being another mediocre dive destination to something to rave about overnight? Easy: It showed us something different and unique to this country. 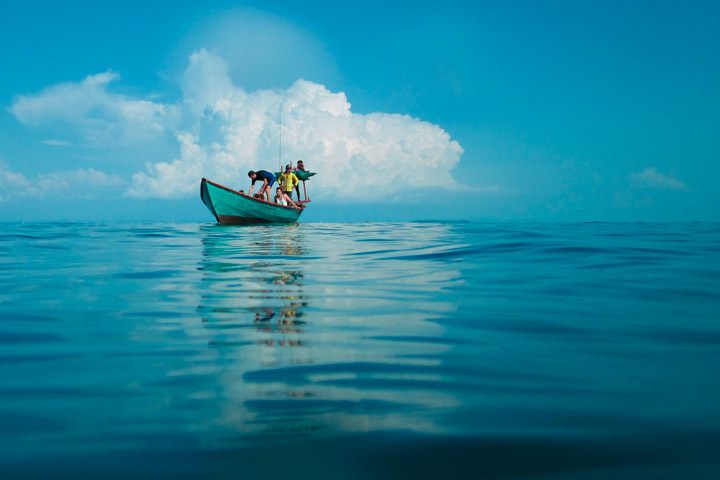 I encourage scuba enthusiasts traveling to South East Asia to give diving in Cambodia a try. Based on what I experienced, I would recommend asking to stay away from the reefs, which were sub-par, and ask to be taken to “The Corral” or a similar site. 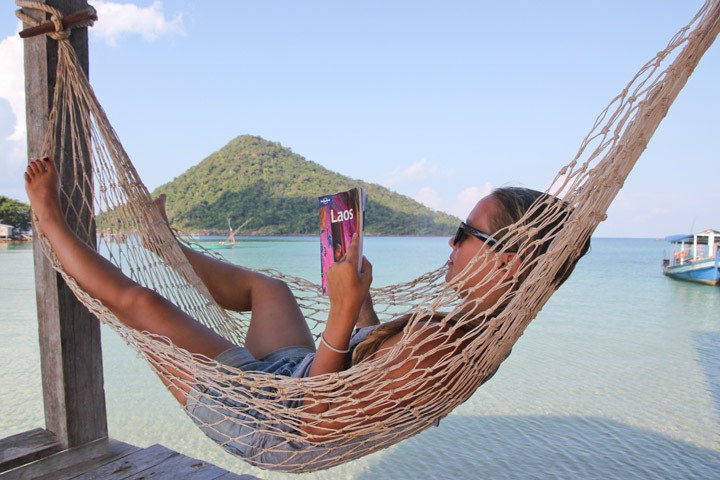 The actual diving was only a fraction of our experience with Island Divers. The rest was the experience of visiting such a remote and beautiful island and visiting a village that maintains such a traditional way of life. Island Divers maintains a very close relationship with the Mai Pei Bei community, and it shows. 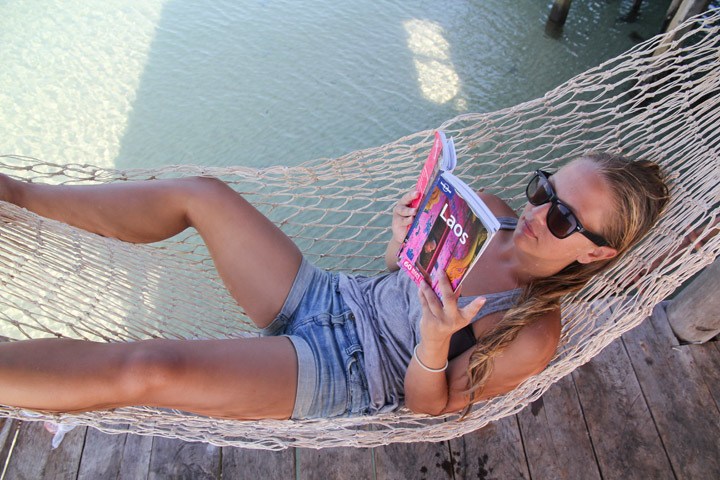 We came to Cambodia looking for a dive shop with new and safe equipment, strong community ties, and insider knowledge of dive sites. Island Divers provides that and more at a reasonable price: $75US for a two dive day-trip or $165 for an overnight trip with four dives plus an optional night dive (we did a combination of these packages; staying overnight but only doing two dives).

As the boat drew back into Sihanoukville harbor, I was smiling once again. I had hoped to find something positive to say about diving in Cambodia; to, in my minuscule part, help encourage responsible dive tourism to a place that I love so much. What I found, well, it blew me right out of the water.

Full disclosure: For the purpose of reviewing Island Divers, we received a 50% discount on our trip.  As always, all thoughts and opinions are my own.

Diving Where Few Women Have Dived Before: Scuba Diving in the Dead Sea

Where to Stay in Siem Reap

Diving in Cambodia Part I Photo of the Week 27
32 Comments...