Nha Trang, for us, was turning out to be a vacation from travel. Everything we did was silly giddy fun, and this day was no exception. We were heading to Vinpearl Land, an island resort with rides, a water park, arcade games and an aquarium-and we could not have been more excited. After all, it is where dreams come true! Or is that another famous theme park? 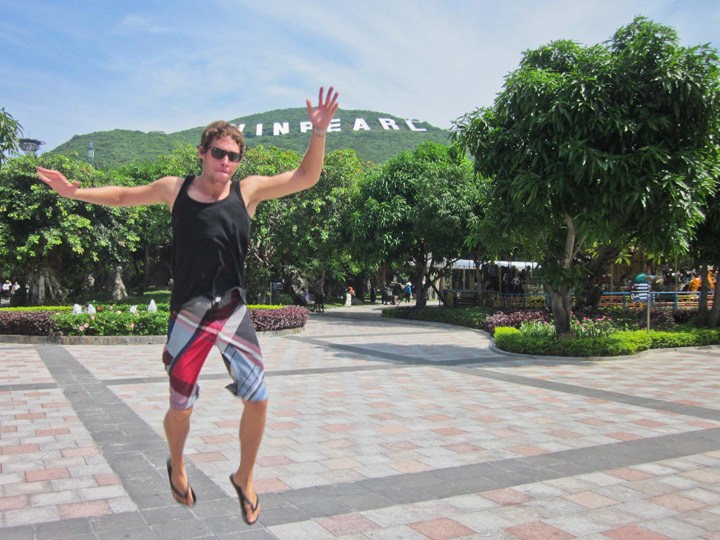 Vinpearl Land resides on one of Nha Trang’s offshore islands, which allows for a very dramatic entry to the park via the world’s longest over-the-sea cable car. 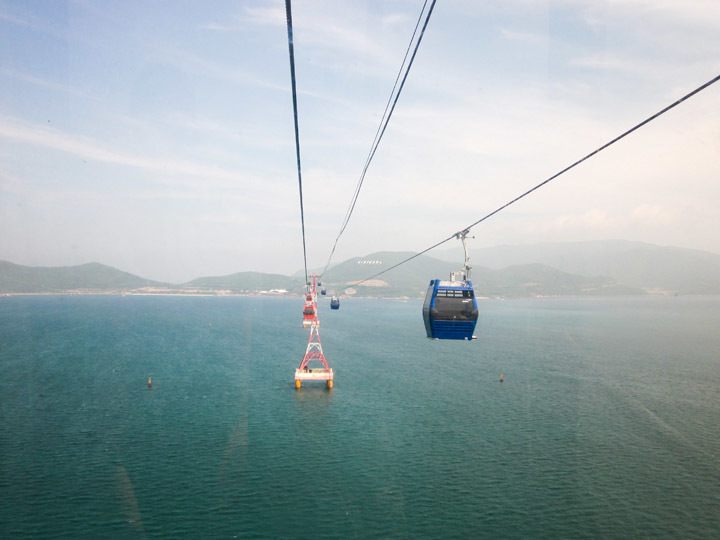 I’m not afraid of heights, but there was still something nerve-wracking about being enclosed in a glass box high above the endless ocean — in a country not necessarily known for its safety standards. 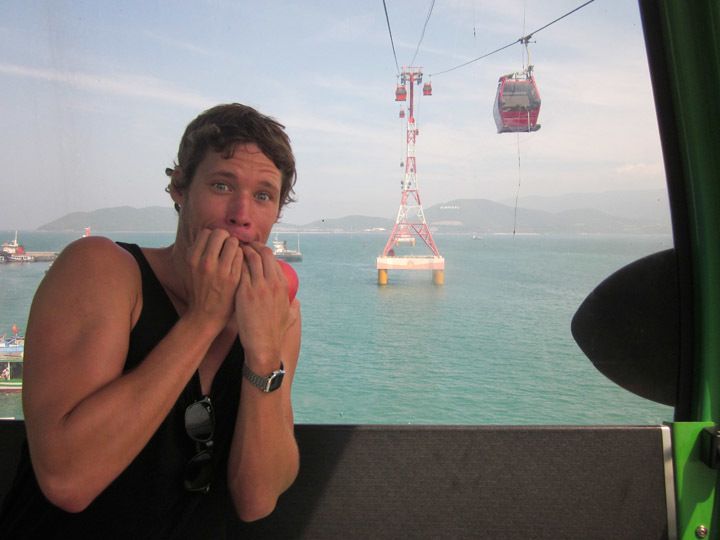 As the cable car drew closer, we got a better look at Vinpearl’s Holleywood-esque sign. 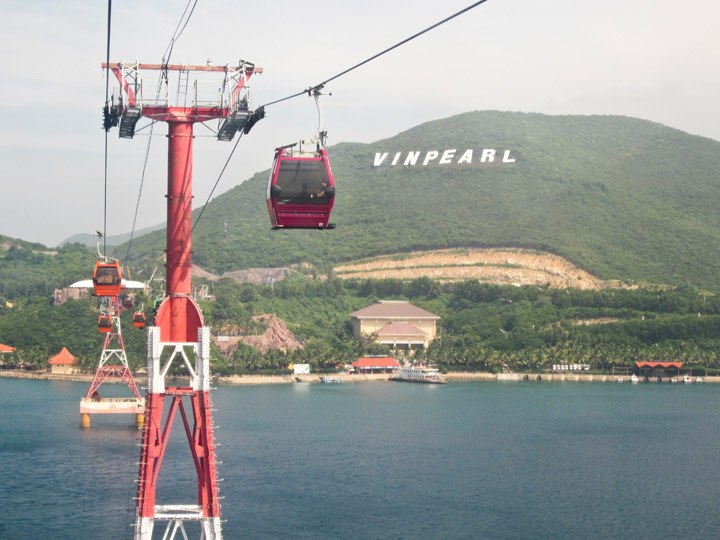 Within minutes of arriving we bumped into a group of friends we had first met in Sihanoukville. It was an ideal situation, since theme parks are less of a romantic date location and more of a group-race-down-the-waterslide kind of place. 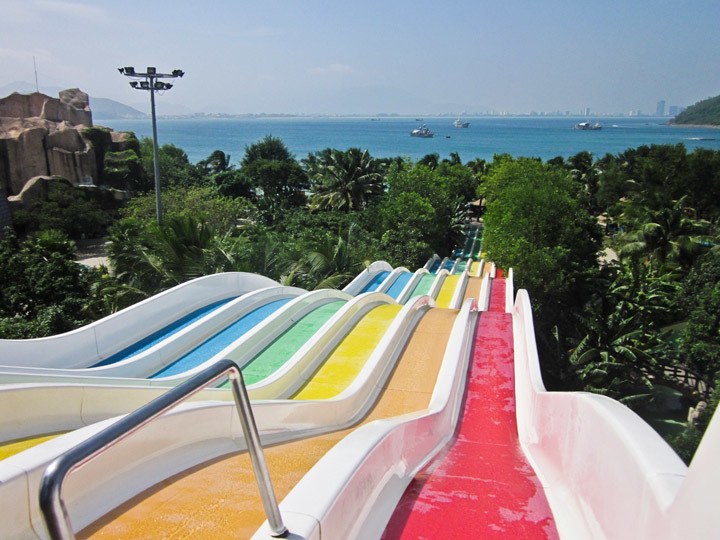 And race we did. Vinpearl isn’t exactly winning any international awards, but the water park was definitely an ideal place to spend a beautiful day. Some of the rides are boring and/or painful, but there are a handful of strong staples. 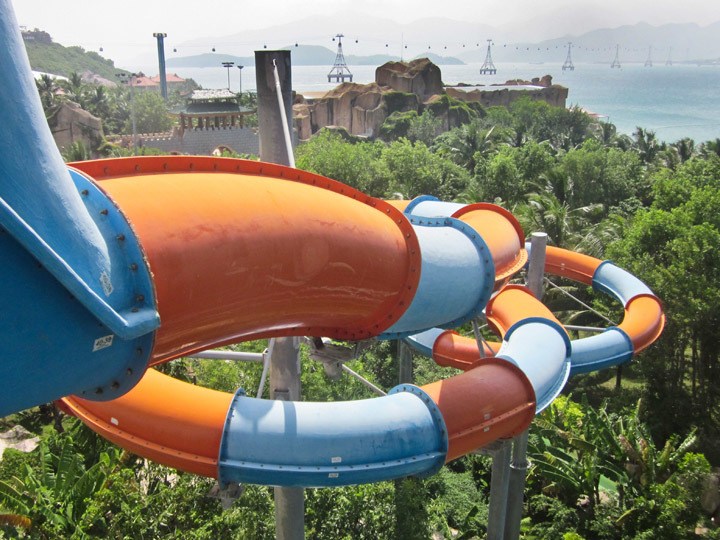 One of the fun things about Vinpearl is it’s a huge domestic tourist draw, so we saw just as many Vietnamese families out to have a good time as backpackers. Vinpearl is for everyone! Or, on second thought, maybe not. We nearly lost it when we spotted this sign warning that “Mental patients, pregnant women, and people with heart disease should not ride this ride.” 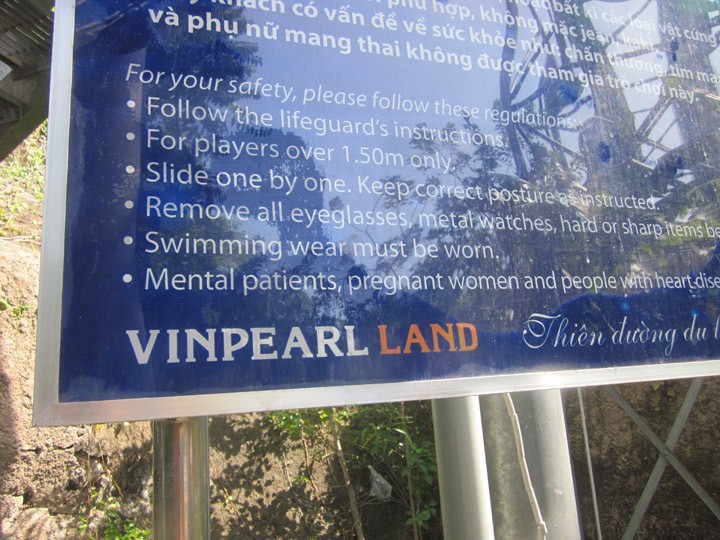 Even funnier than the existence of that sign was the fact that there were no rules. Truly, we were able to freely violate pretty much any international health and safety standard that could possibly exist. On the rides where there actually were employees, they barely blinked when we used half-deflated floaties, violated all sense of line procedure, or seven of us went down a slide at once. 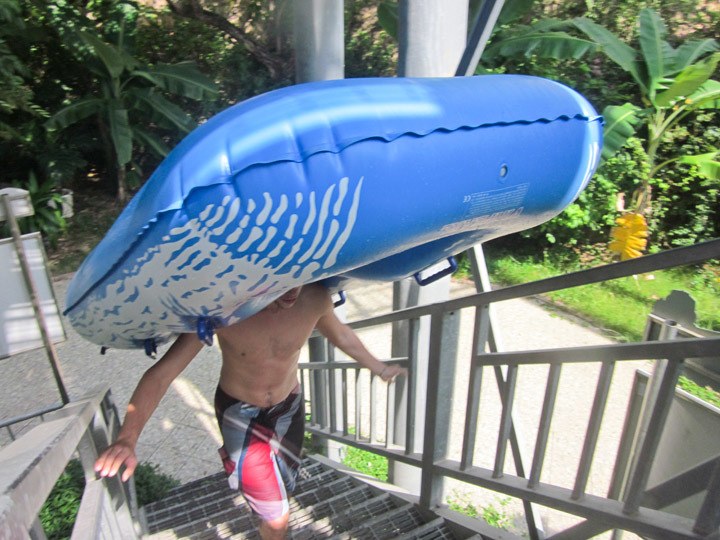 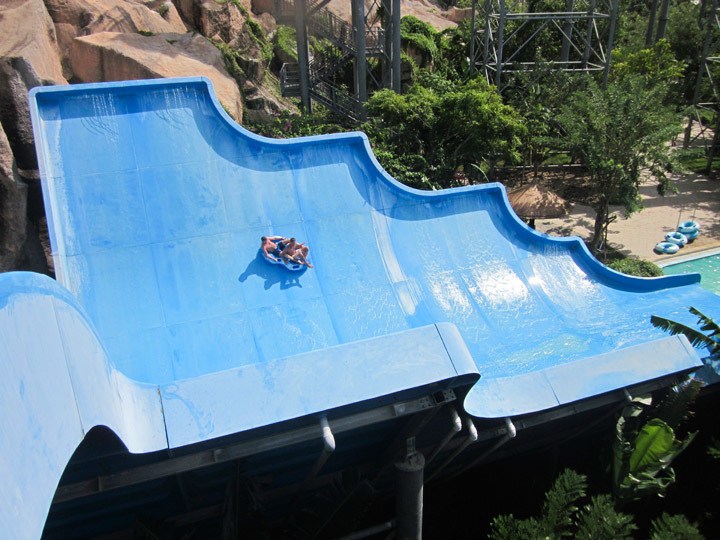 The downside was that there weren’t enough of these astute employees to go around, so only half the rides were open at any given time. Posted out front were the most random opening times, with each ride being open for a few 45 minute to an hour intervals each day. We waited very patiently for the wave pool to open (the biggest in South East Asia- and that’s saying something.) 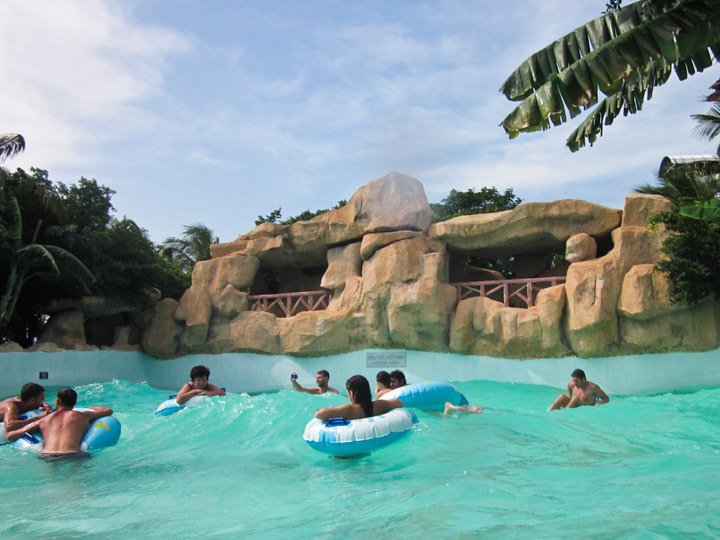 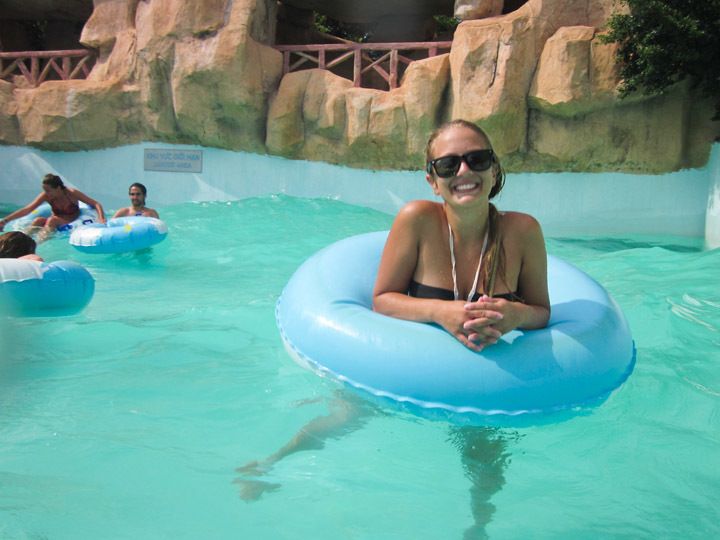 Afterwards, while we were waiting for one of the slides to open, an impromptu obstacle course was started in an unused pool with some spare floats. As one guy was trying to hop from the slide onto land without touching water, an employee walked by. Again, barely a blink registered. Can you image that happening at a water park in the States?! 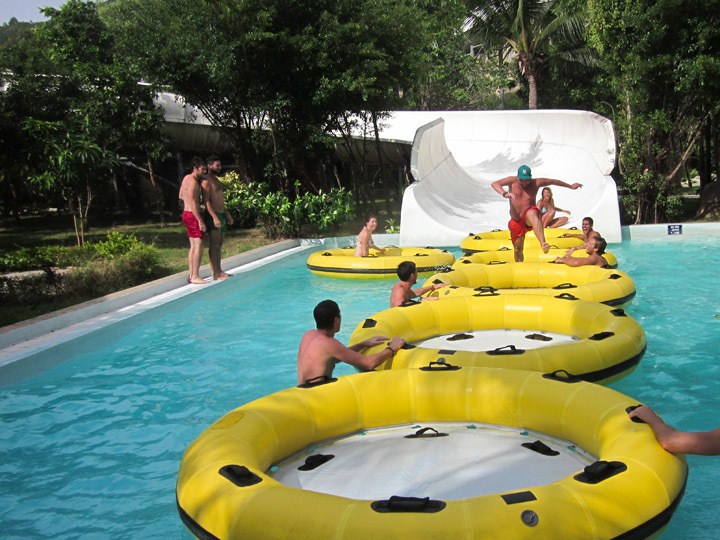 When that ride did open, we got to see some serious engineering ingenuity. How to get a massive pool float up to the top of a several-stories-high ride? By hand-pulled pulley system, of course. 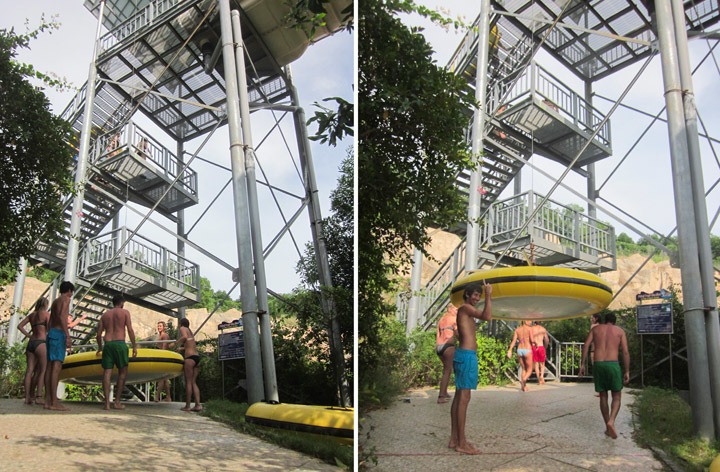 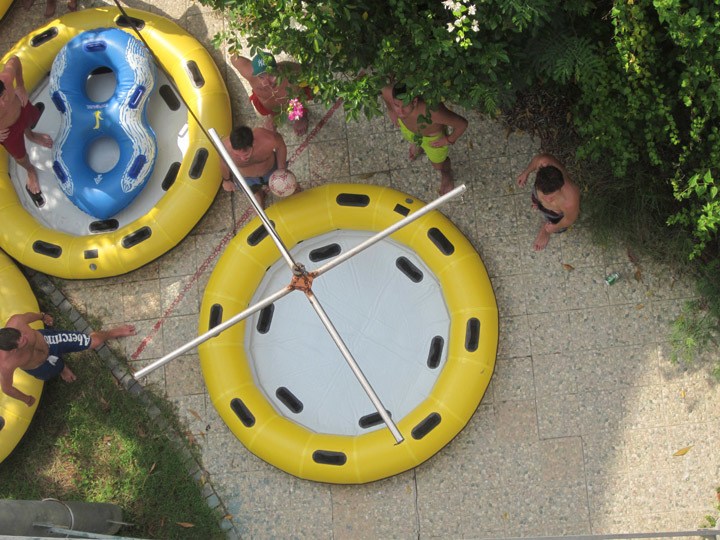 I was so busy documenting the whole thing that I somehow got left behind at the top of the tower — meaning I was subjected to another painful walk on the horrible metallic stairs. I think they were trying to prevent running — and it worked. 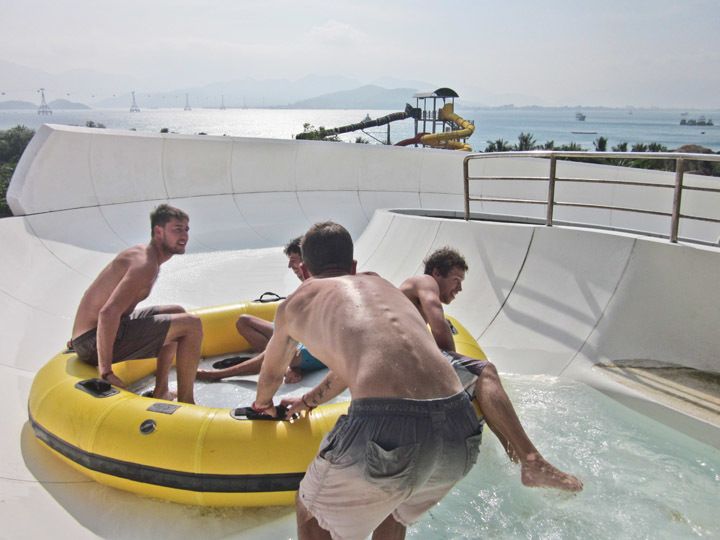 It took us about half a day to cover the whole water park, with a few repeat runs on the best slides. 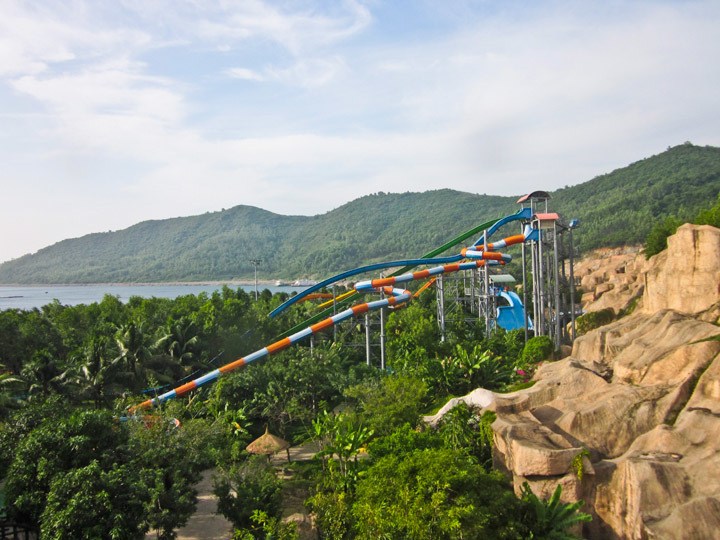 We were sad to leave, but tummies were rumbling. I was dreading getting lunch in the park, having flashbacks to the ridiculously overpriced $20 lunches at Great Escape theme park in my childhood. To our surprise, food was extremely reasonably priced and I spent only a few bucks for lunch. 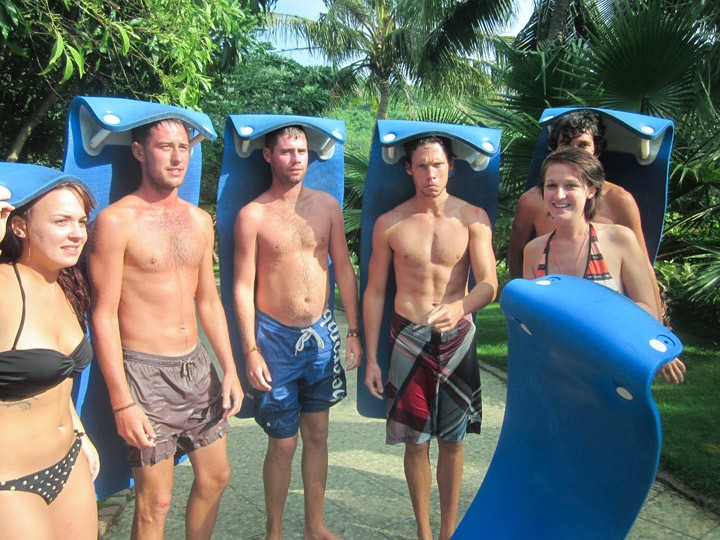 Our next stop was the aquarium, which Mark and I laughingly realized was our third aquarium in three days. It was included in the ticket price and quite good, featuring a moving walkway through an aquarium tunnel, and great conditions for the marine life. 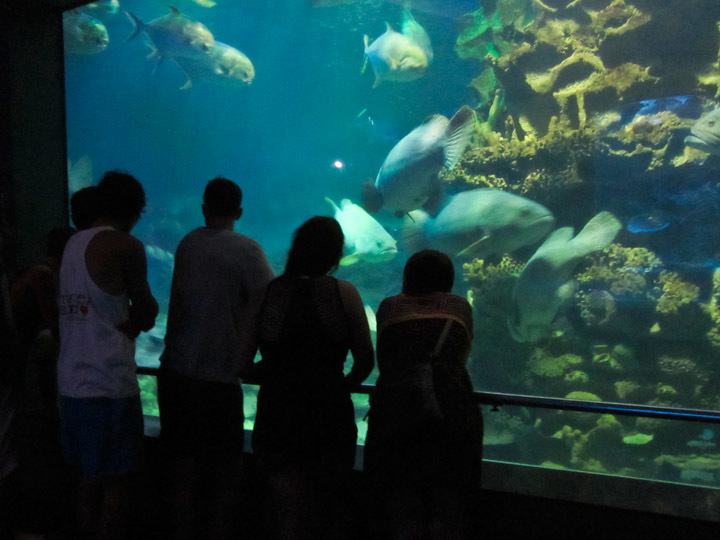 Unfortunately, our next stop wasn’t so animal friendly. En route to the arcade we were distracted by some pups performing in an animal show. The dogs, being the domesticated and human-pleasing species that they are, actually seemed to be enjoying themselves. 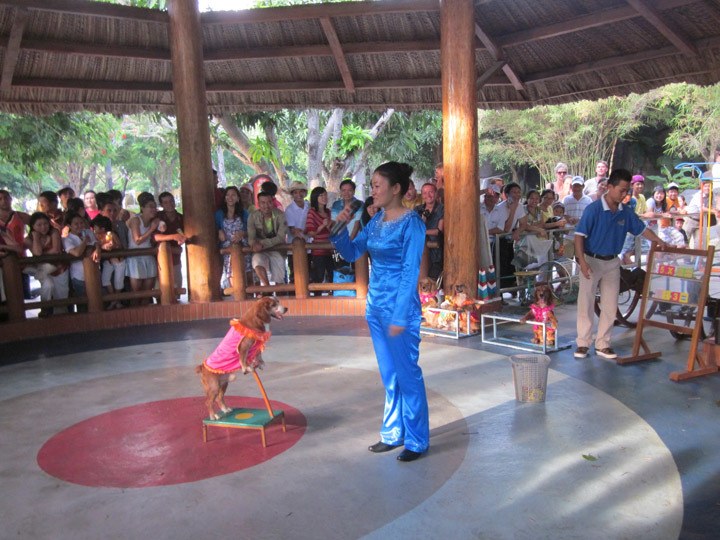 Sadly, the monkeys that came on next were not. They were actively resisting the “tricks” they were being ordered to perform and looking miserable all the while. It was upsetting to watch and we quickly left. 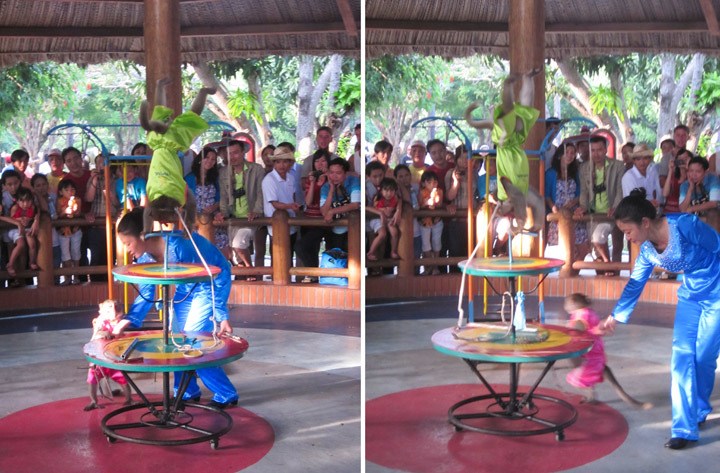 In contrast, the arcade was basically Mark’s dream come true: a two-story fun house with games, rides, bumper cars, and a 4D theatre- and they were all free. It was after dark when I was finally able to drag him back onto the cable car. 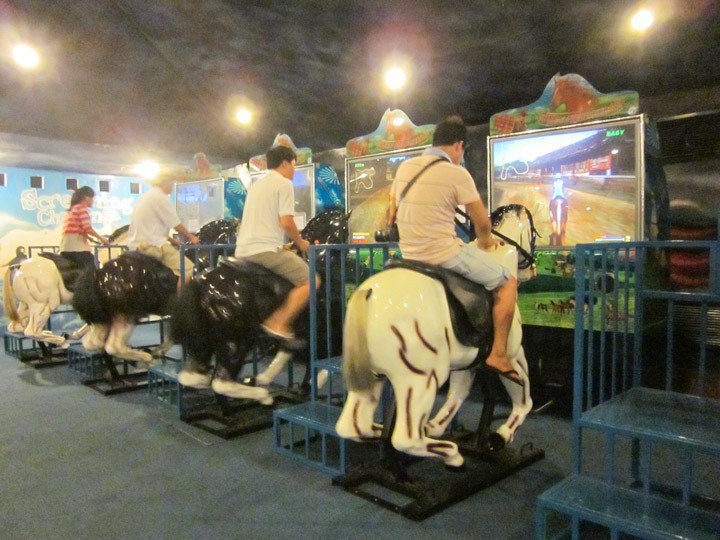 Vinpearl Land has a pricey-for-South-East-Asia entry fee of 360,000 Vietnamese Dong, or about $18 USD — but compare foreign exchange rates online for current rates. But what I liked about it was that unlike most amusement parks in the West, they didn’t create millions of opportunities to part you with more of your money once inside. The rides, the aquarium, even the amusement games were all totally free, and food and drinks were fairly priced.

Not to mention it was hilarious to observe first hand (and take advantage of) the lax safety standards that exist in even the most Western of establishments in South East Asia. 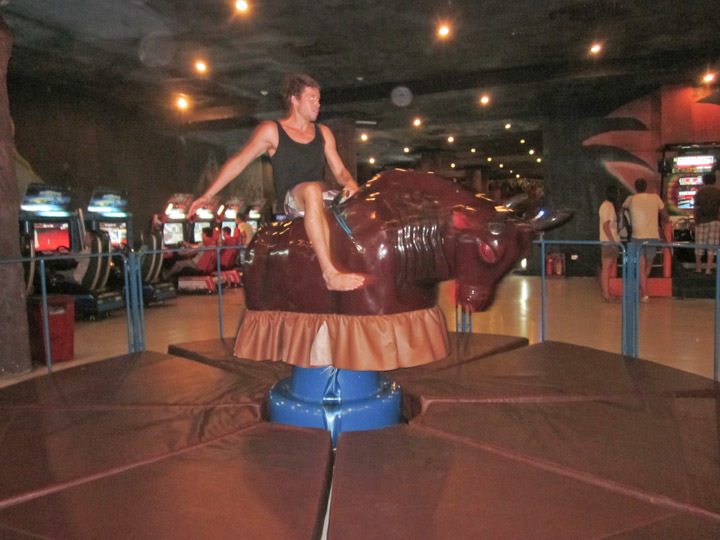 If you ever find yourself in Vietnam and travel-fatigued after weeks or months on the road, take a day off from hard core backpacking, treat yourself, and make some dreams come true. Go to Vinpearl Land.

This post was sponsored by a valued advertising partner.