Once I had my fill of wandering the streets of Phnom Penh and pretending I was an urbanite again, Mark and I set out for the beach. Cambodia’s coastline is relatively small, but features a few tourism hotspots. Chief among them is Sihanoukville- backpacker’s paradise and jumping off point to the pristine offshore islands. Not only were were looking forward to some time in the sun, but we are also always on the scout for future possible home away from homes in tropical places with a diving industry. 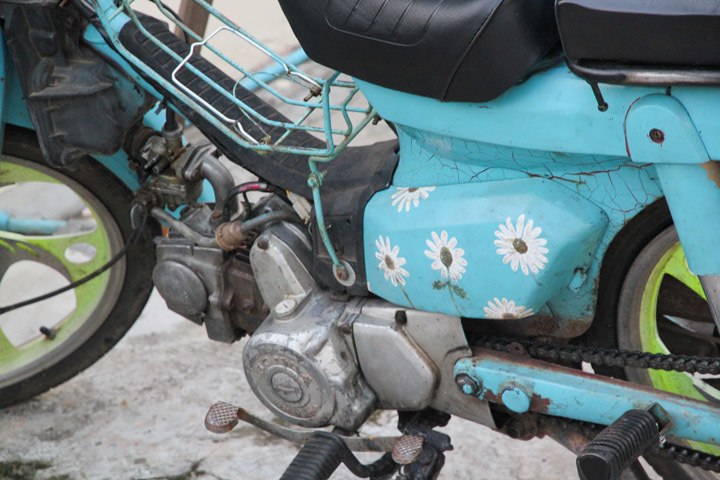 Unfortunately, we just didn’t feel it in Sihanoukville. The town was pretty dilapidated- and not in a charming way. The nightlife was fun- but there wasn’t much variety. And worst of all, the beach was just disappointing. I think we may have had bad timing. Busy season was just starting and the overall effect was kind of a sleazy ghost town. Perhaps if the place was packed with other merry makers we would have felt differently. 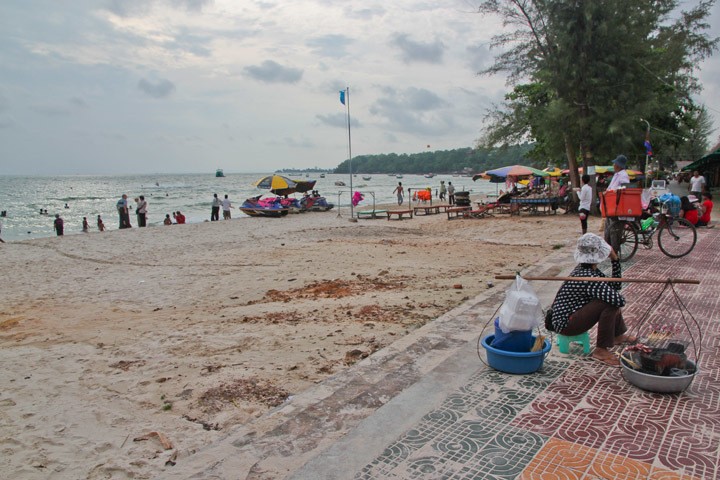 Still, we know plenty of people who love Sihanoukville (though apparently not Tripadvisor members) and so as always I encourage travelers to go check it out for themselves. It’s actually a must, since it is the gateway to Cambodia’s islands- and if you pass up the chance to visit them now, you’re crazier than the local Russian madman in S’ville who runs around hitching rides on the outside of other people’s tuk tuks. (Post forthcoming- about the islands, not the madman).

Despite our icky feelings towards the place, a variety of circumstances, including illness, ended up keeping us in Sihanoukville for a week in total. Here’s a bit of what we got up to:

I wasn’t expecting to dress up and participate this year, but when our friends who had gone to the beach ahead of us from Phnom Penh sent us an urgent message to “arrive by Halloween, bring wigs” who was I to argue? We were seriously impressed with the quality of costumes people were able to pull together thousands of miles from the nearest Halloweens ‘R Us. 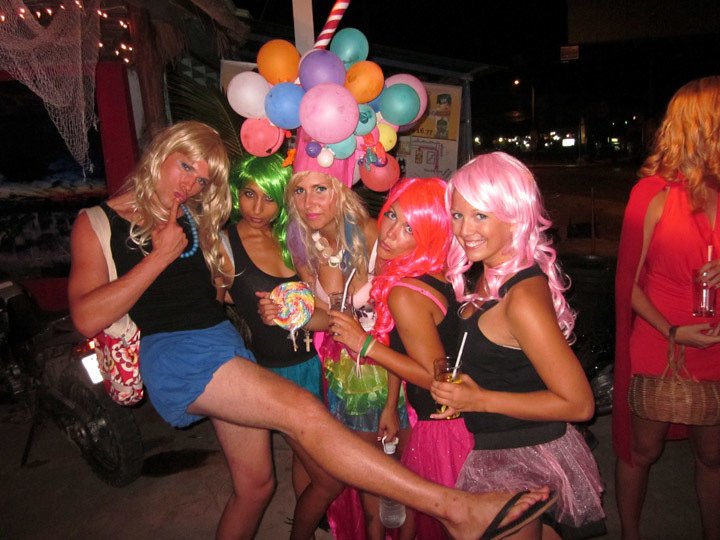 Too bad Mark couldn’t make it out that night. Luckily we were joined by a new blonde haired friend, Markarita. She forgot a costume. 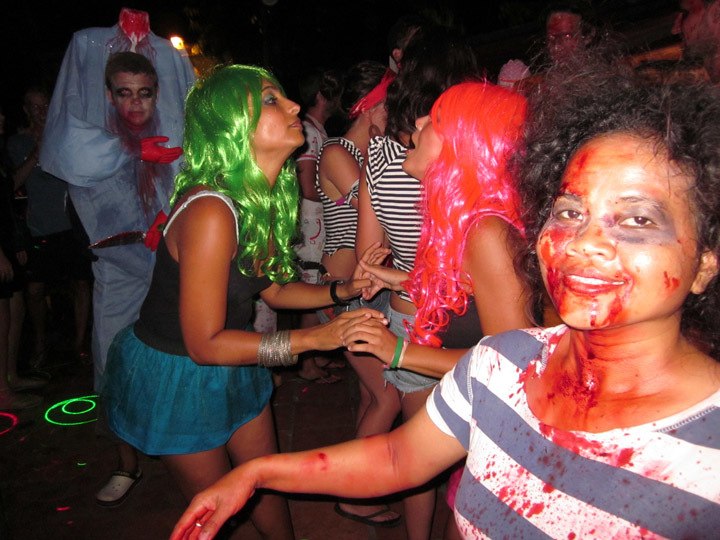 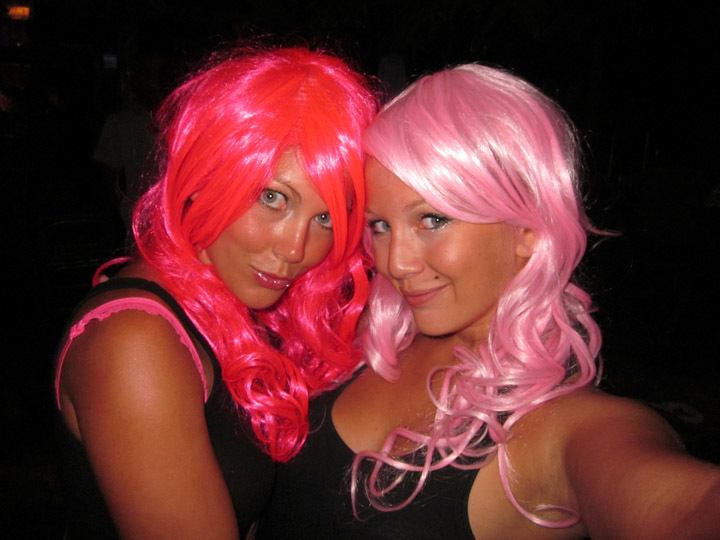 She was also strong. Very strong. 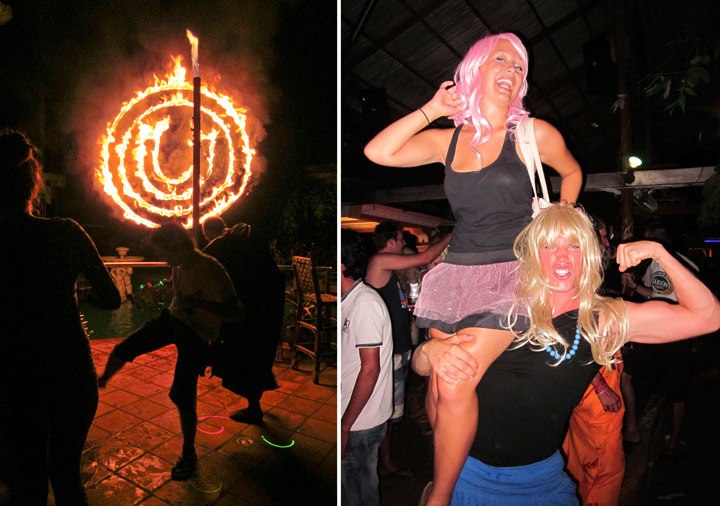 It wouldn’t be a trip to Sihanoukville without some serious beach time. Unfortunately, as I mentioned above, these strips of sand were nothing to write home about. Worse, they were absolutely mobbed with very persistent beach vendors, and constant warnings not to leave your valuables out of sight for a moment. This meant Mark and took turns swimming in the murky water. Fun! 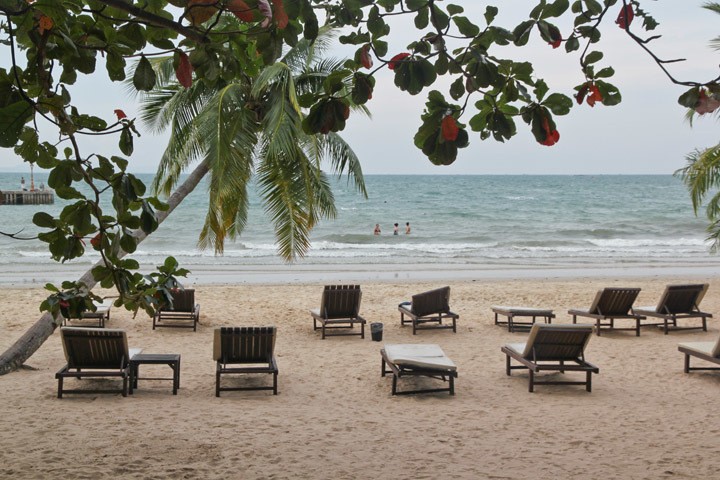 Still, we had some laughs. Mark rented a surfboard one day at Otres Beach and did pretty well considering the near total lack of surf. And I got to play guard dog to our bags and be interrupted from my magazine reading every four minutes to vehemently refuse a string bracelet. 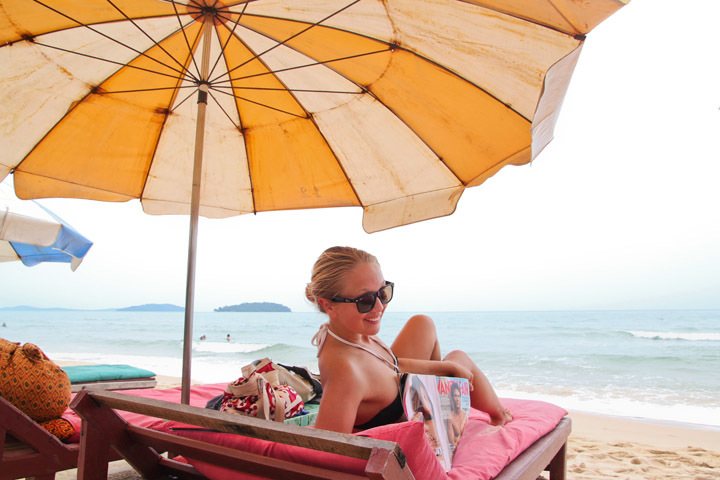 Another day, we asked some trustworthy looking English speakers to watch our bags and paid a dollar each to go wild on these water toys out in the ocean. It was silly, happy fun, the kind you need after weeks of culture-vulture traveling.

Strangely, along with certain parts of Koh Samui, Thailand, and Mui Ne, Vietnam, Sihanoukville is a Russian holiday mecca. Everywhere you go you can spot Cyrillic signage and hear thick Russian accents. I don’t know much about Russia or it’s inhabitants, but I now know that they built some really cool bars in South East Asia. 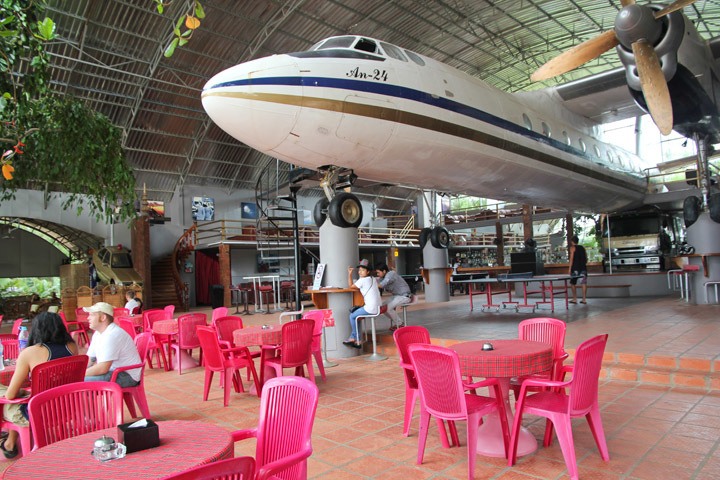 One of them being Airport Lounge Bar, a bar and restaurant on the beach that features, as you may have taken note of in the photo above, a full sized airplane. 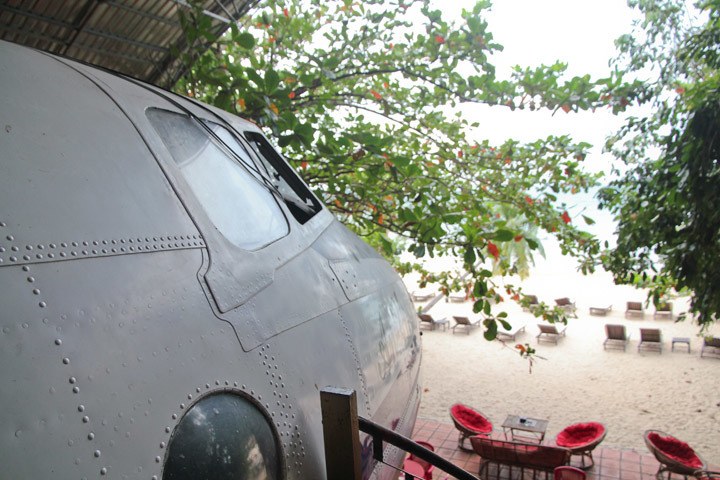 The cool part is you can climb inside the airplane and pretend you are a pilot or perhaps a character from the TV show Lost in those episodes where they crash land in a tree. 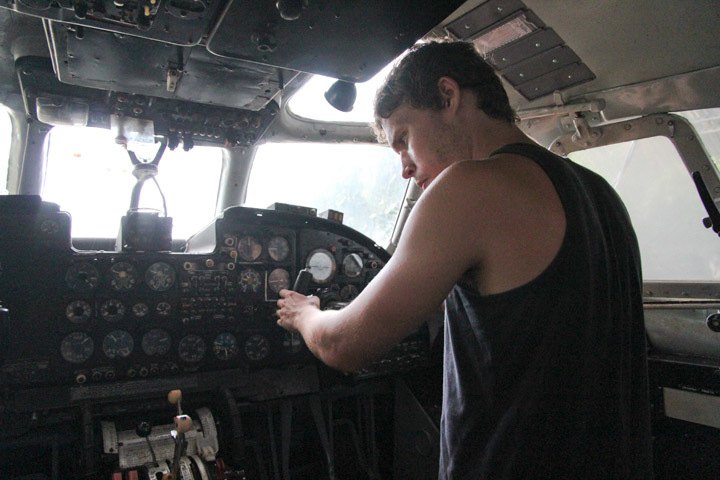 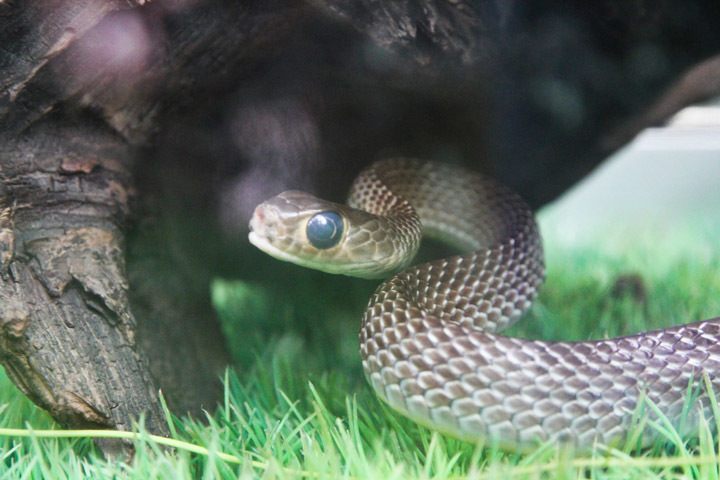 We visited during the day, which prompted an entry fee of $2-3, but you can avoid that by eating a meal in the restaurant at night. I recommend doing that. Once we saw how cool it was inside we were kicking ourselves for not eating there. In addition to being a restaurant, the establishment also provides anti-venon to nearby clinics and hospitals. 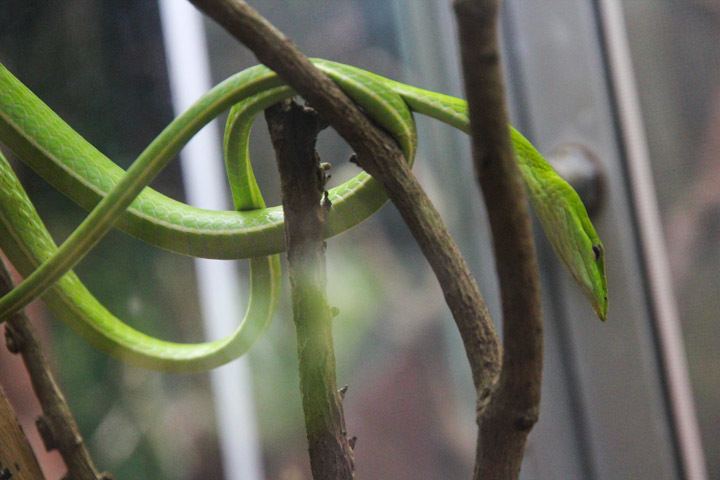 The cool part is the snakes and other reptiles were super active compared to the normal state they seem to be in at zoos, which is somewhere between comatose and dead. With the exception of one crocodile who was being kept on a leash, the animals seemed decently well cared for. 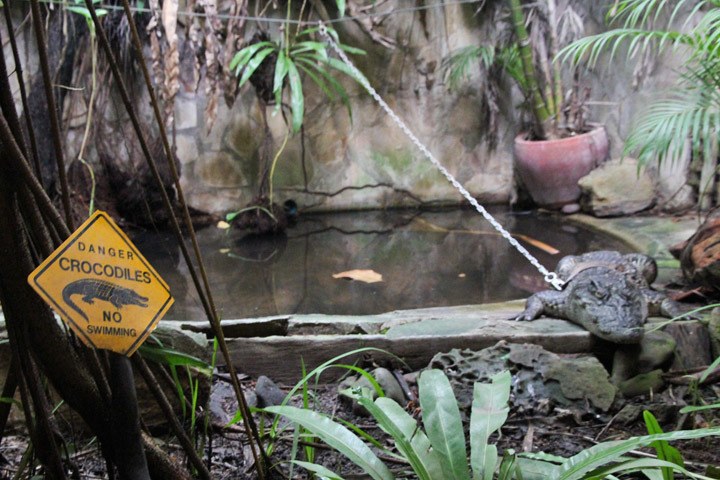 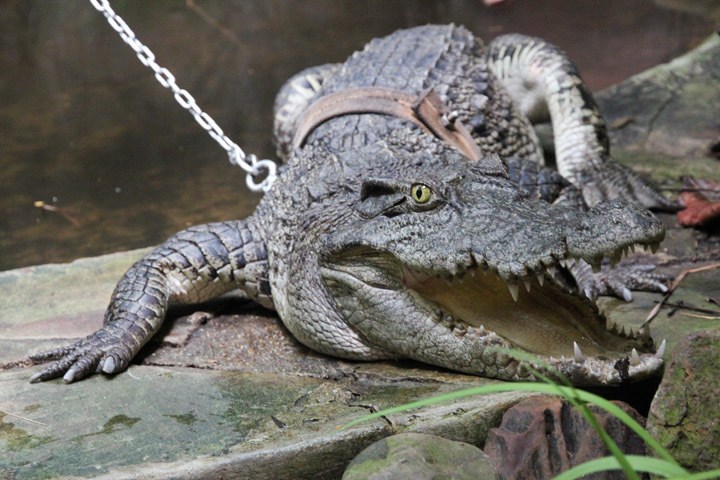 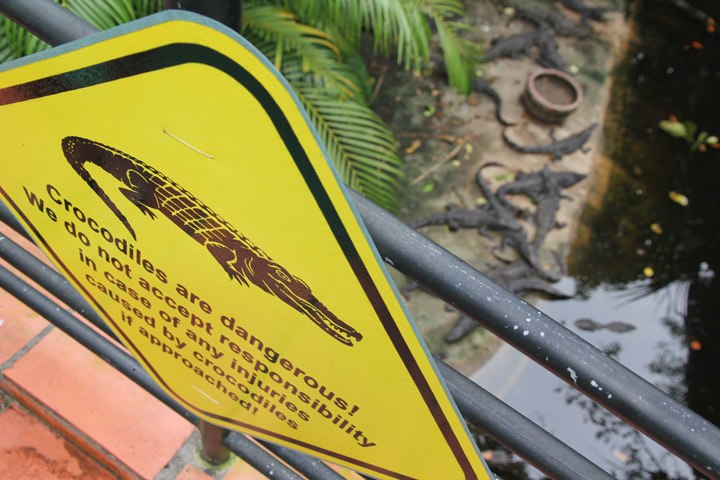 It wasn’t all reptiles, either. In the main dining room there was an enormous salt water tank with sea turtles and tropical fish, and the garden featured some impressively beautiful birds. 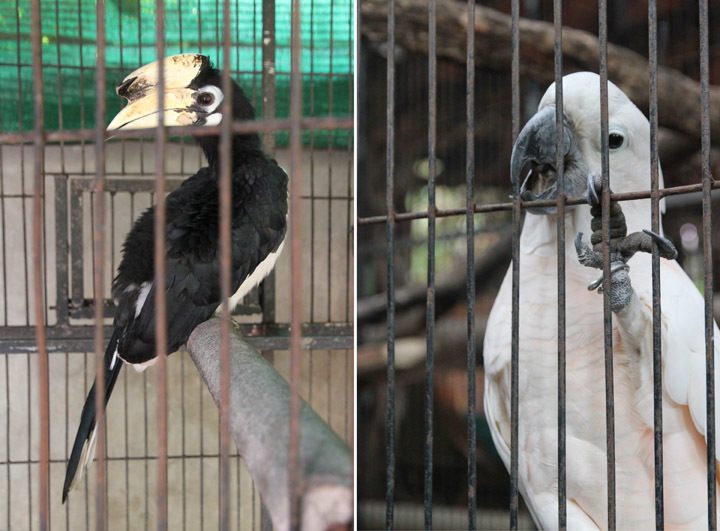 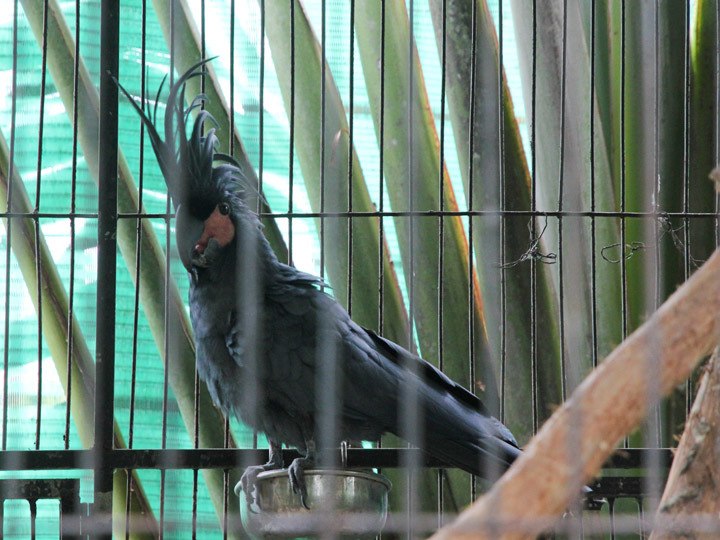 So there you have it. A week in Sihanoukville for us translated into mediocre beaches, some major nights out, and some crazy Russian bars. Stay tuned to read about the true hidden jems of Cambodia’s coast- the most beautiful island I have ever laid eyes on.

Do you think I’m crazy for not liking it? Isn’t it frustrating to get to a place that people rave about and just… not get it?

Have you been to Sihanoukville?

A Tale of Two NGOs: Hope and Healing for Cambodia