Taking a Vacation From Vacation in Nha Trang

The moment we stepped off the overnight but from Saigon, I felt lighter. The city had weighed on me, leaving me with a bitter taste in my mouth and smog in my lungs. But Nha Trang makes an excellent first impression: warm ocean air, shining sun, and a friendly tourist vibe. I was ready for a vacation from traveling. 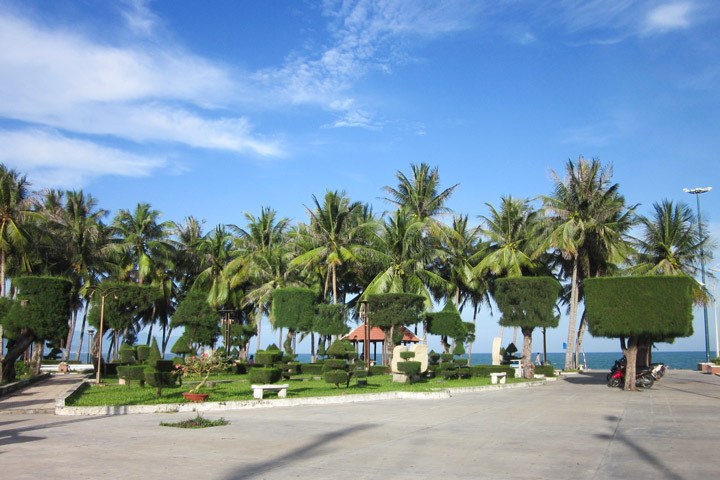 Little did we know how hard it would be to leave Nha Trang. In total, we would spend nearly a week of our preciously short time in Vietnam hanging out and exploring this slice of coastline. Nha Trang is a resort town that manages to combine high-rise hotels with a laid back backpacker scene. There are great restaurants, endless to-do’s, and some of the country’s best nightlife. Best of all, everything is super affordable, from the clean and air conditioned $8 a night hotel room we scored to the $1 happy hour buckets we sipped on the beach.

There is so much to share, but here’s a taste of what we got up to in Nha Trang: 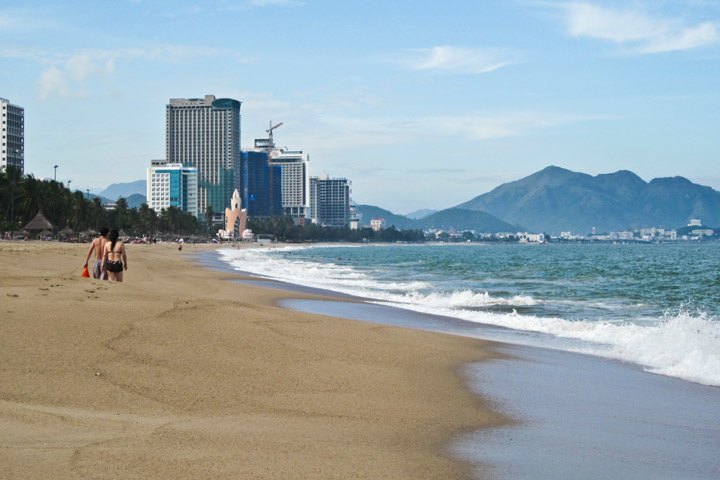 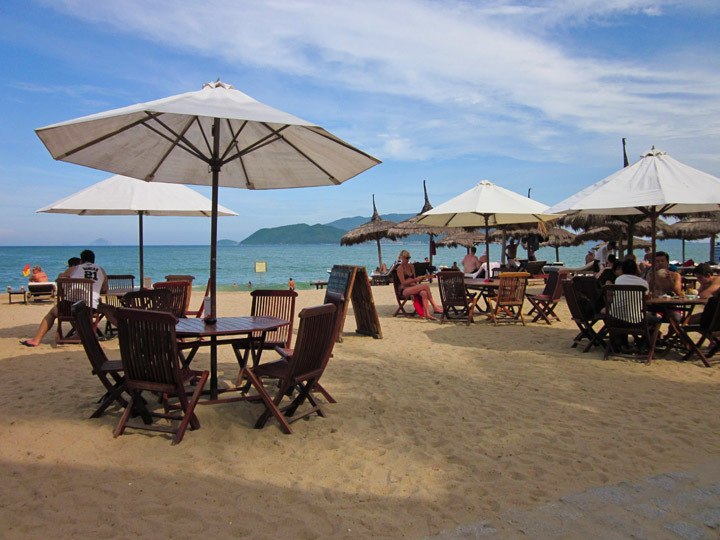 Unfortunately, we arrived in Nha Trang during the three month “rainy season.” And while we didn’t see a drop of rain in our entire time there, the water wasn’t the clear blue of postcards but rather muddied by run-off from the mountains. We are pretty lucky in that we get to see a lot of beautiful beaches with our current lifestyle, so we were more interested in playing in the massive waves than staring at a crystal bay. 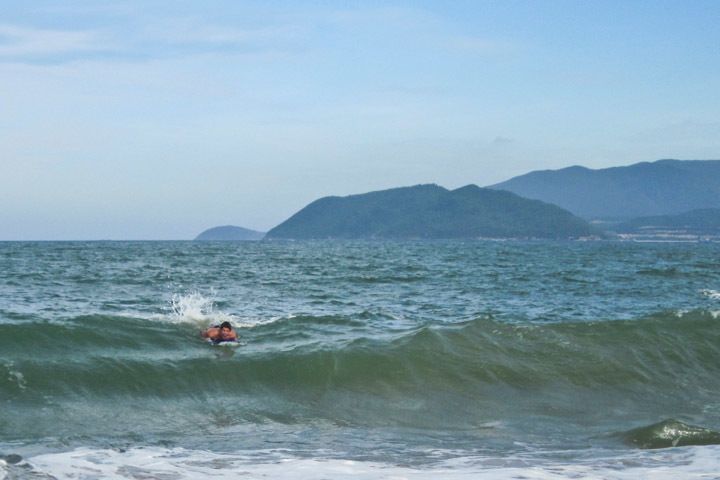 And powerful waves they were. I haven’t been pushed around like that in the water since I was a child playing in the Martha’s Vineyard surf. After one particularly rough run-in with a wave, I ended up with sand-burn on my shoulder that started to bleed! 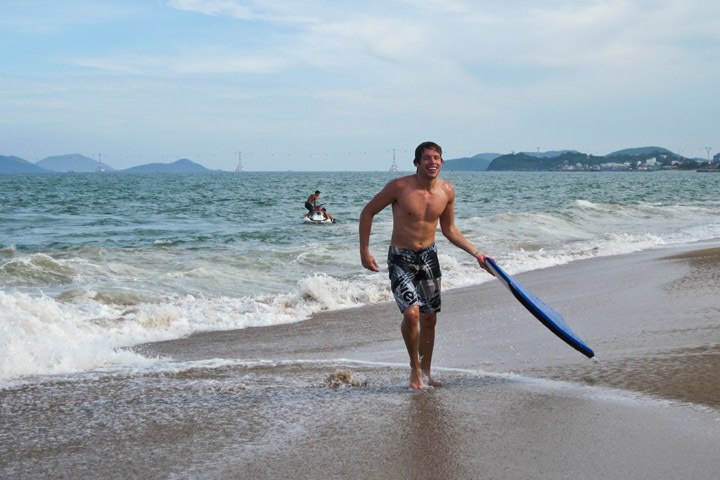 The beach is popular but large and therefore doesn’t feel  overcrowded. There are many restaurants on the sand willing to deliver straight to your beach chair, or you can simply order fresh seafood, nearly straight from the source. 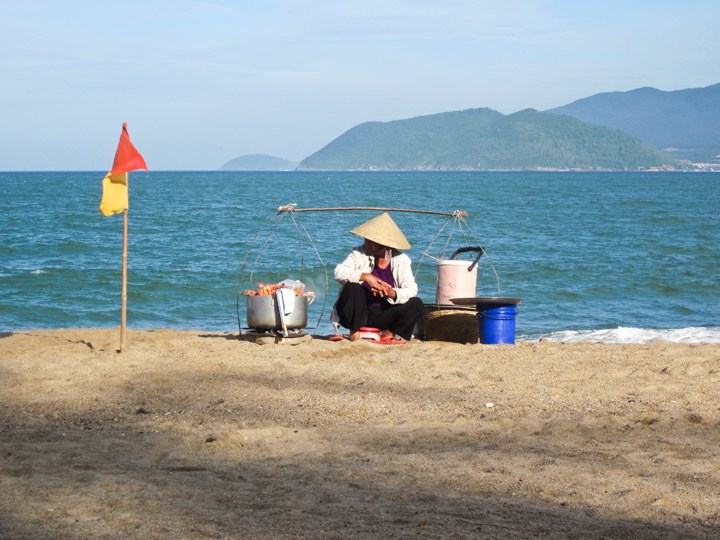 We spent an entire day in Nha Trang at the beach, just playing in the waves, renting boogie boards, and swimming at the Louisiana Brewhouse pool. It was fun, and it was free, and it was just what we needed. 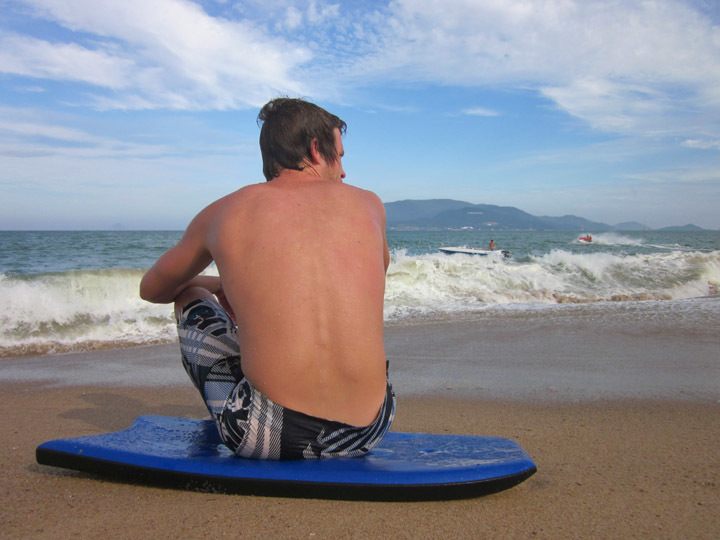 Later we would cough up $4 to rent a motorcycle for the day and explore some of Nha Trang’s sights. First on the list for these ocean lovers was the National Oceanographic Museum. 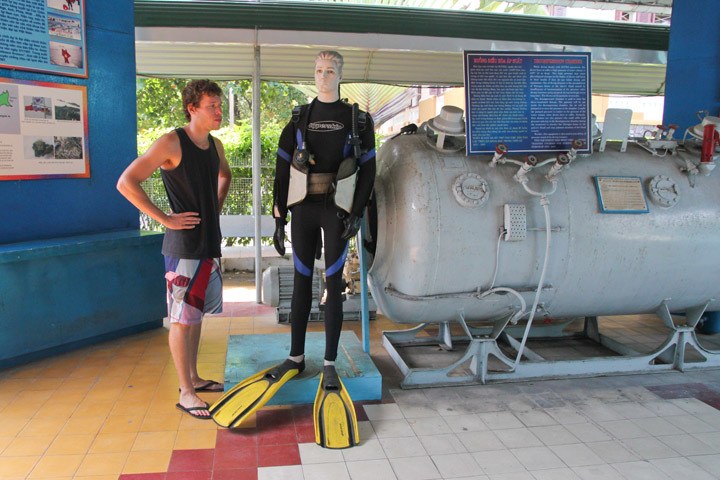 We had no idea what to expect, but with a $1 entry fee, we also didn’t have much to lose. 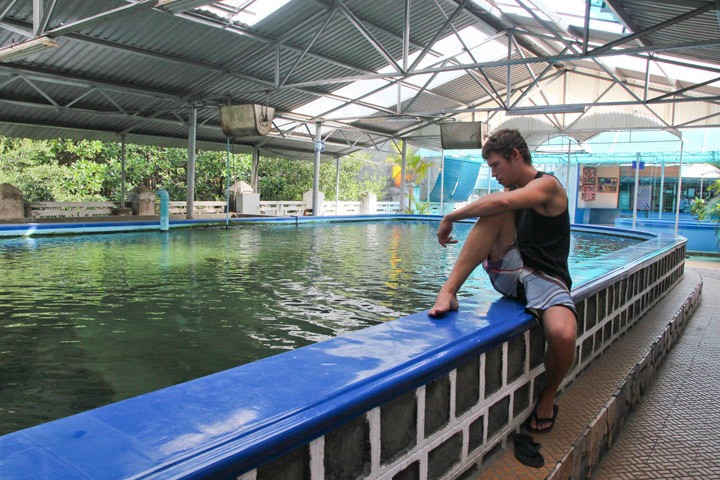 The first section was a bit disappointing as it lacked English signs and the water and tanks were pretty cloudy. 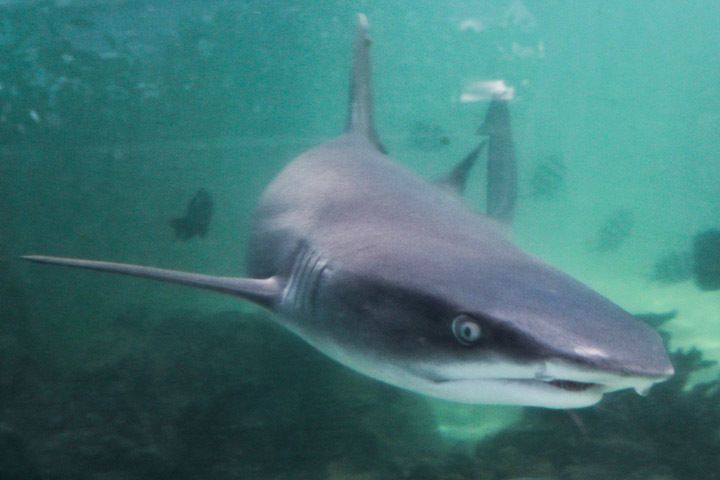 I was shocked by how close we were able to get to some of the animals like these seals and the massive sea turtles they seemed to be sharing an enclosure with. 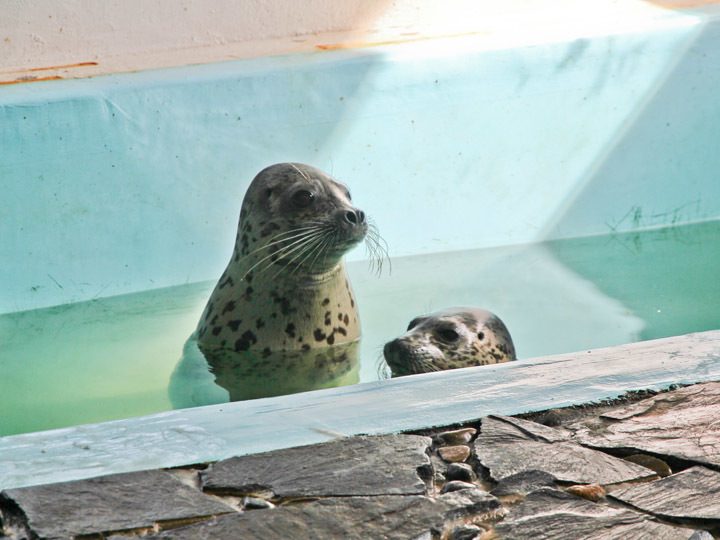 The second section featured some exotic fish and also some English signage- which would turn out to be a source of great amusement. 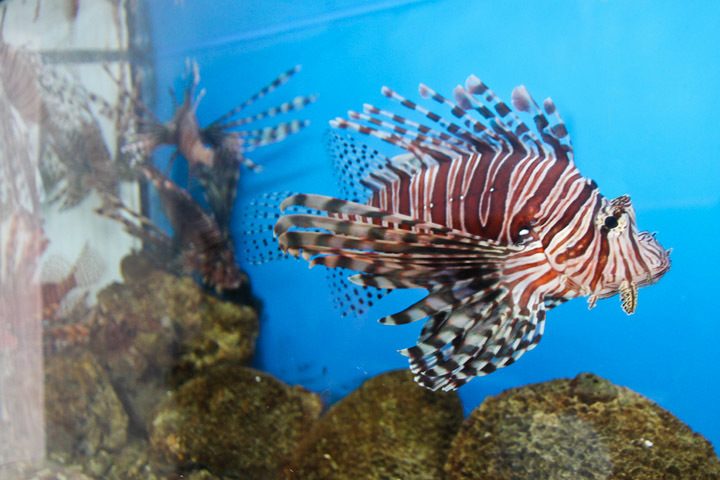 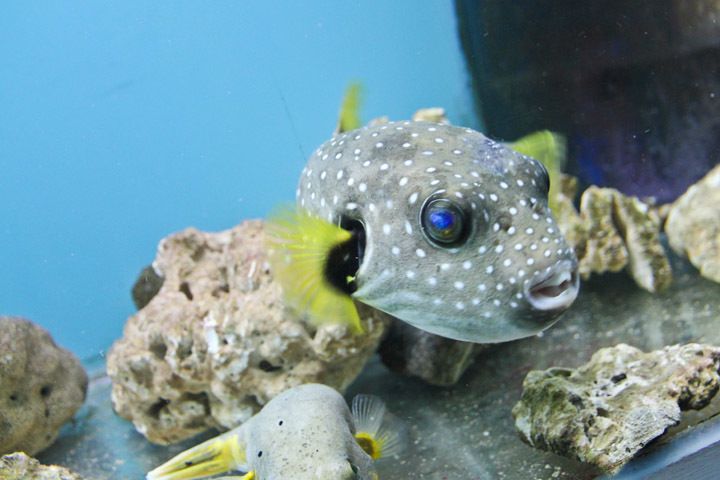 Can you tell what Mark is peeking at in the tank below? They are stonefish, masters of camouflage and disguise. 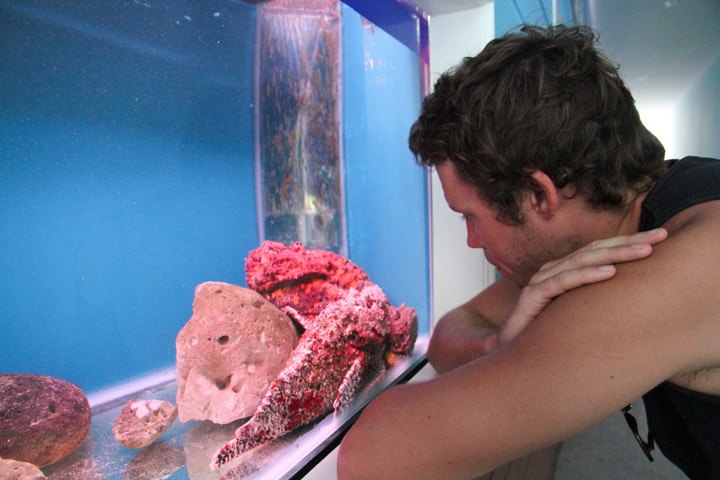 We nearly died of laughter when we read the accompanying sign that- in addition to telling us about the size, distribution and characteristics of the stonefish- informed us that “stonefish flesh is very delicious.” We were most definitely in Vietnam. 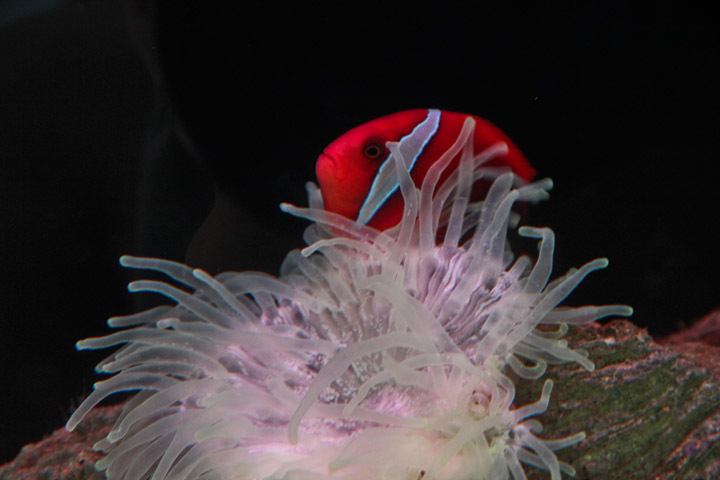 Some other highlights included clownfish and the striking Picasso triggerfish. 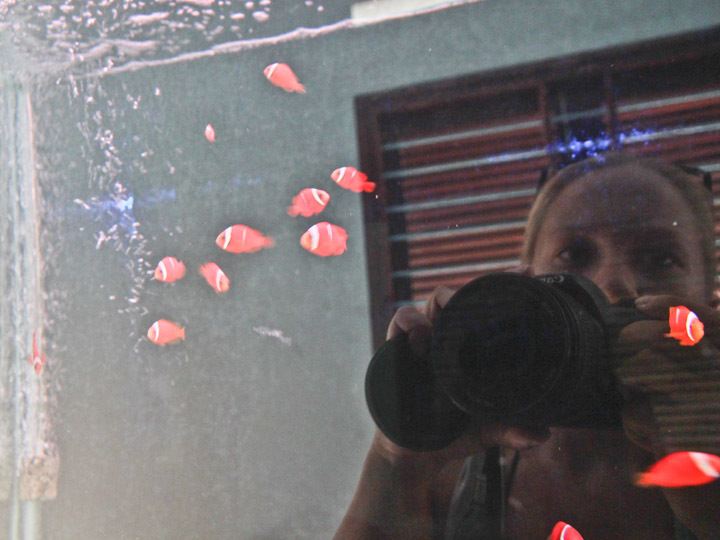 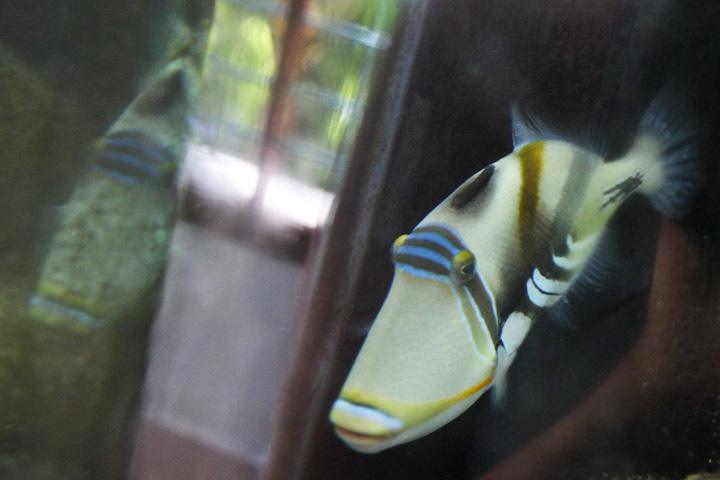 I burst out laughing once again when we entered the next building of the aquarium, which featured a serious looking display about everyone’s favorite sea creature: the mermaid. This “museum” was getting more and more educational every minute. 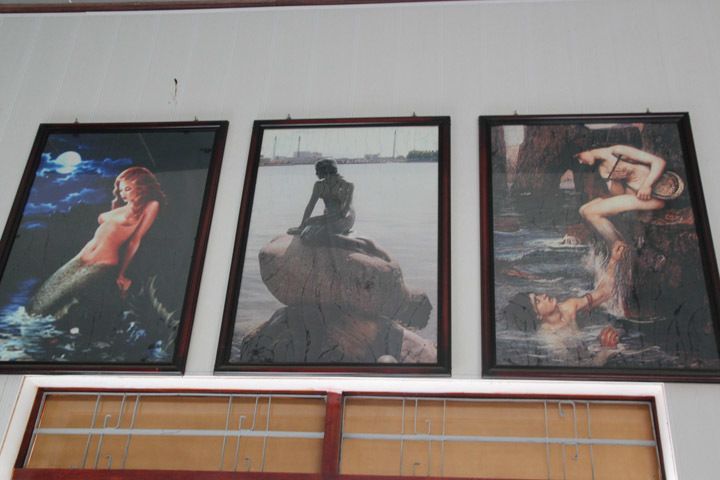 The absurdity didn’t end there. First we walked by a card table “gift shop” that included trinkets made of shells and coral- a major ecological no-no. Then, we read yet another hilarious sign that brazenly told of the institute’s hard work breeding clown fish. Not for research purposes or anything, mind you. These fish were headed for pet shops and the aquarium trade. 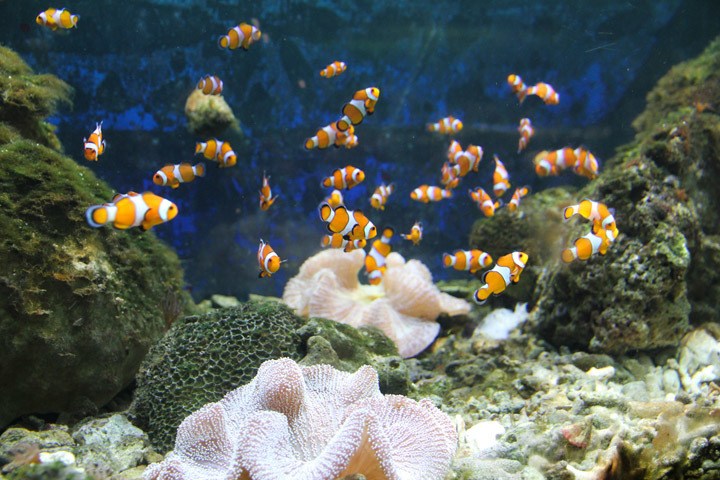 The last building is by far the most unique aquarium exhibit I’ve ever seen- a room filled with endless rows of picked sea specimens, from the a thumb-sized seahorse to a seven-foot-long adult dugong (relative of the manatee). It was like a mermaid’s secret laboratory. 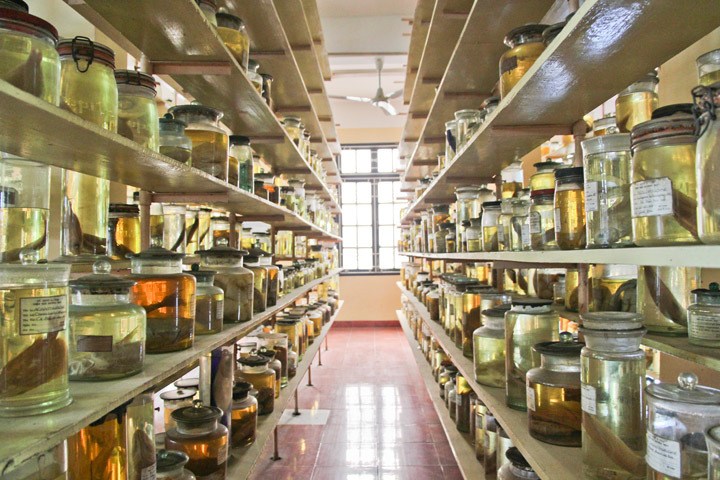 Upstairs the creepiness continued. Dried specimens (and what I hope were some replicas of dried specimens) filled the room. It was somewhat fascinating to see, but I must admit I prefer my creatures to be alive! 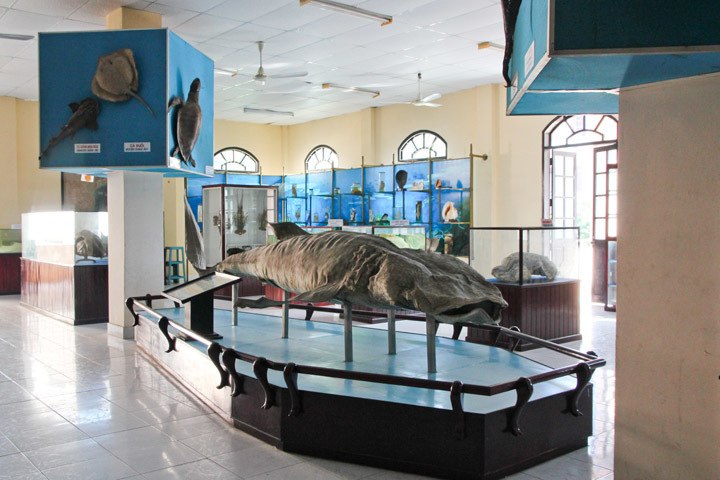 On the way out there was one last opportunity for the bizarre. Old missiles and war remnants were tarted up and painted like sea life, a wonderful metaphor for modern day Vietnam.

Oh, and then someone tried to rip us off by charging us for free parking. A most appropriate conclusion to the most peculiar museum/aquarium visit of my life.

While Nha Trang is known more for it’s guilty pleasures than it’s historically significant sites, we decided on the fly to get our culture on at the Po Nagar Cham Towers. These towers were built between the 7th and 12th centuries, though the site has had religious significance since the 2nd century AD. 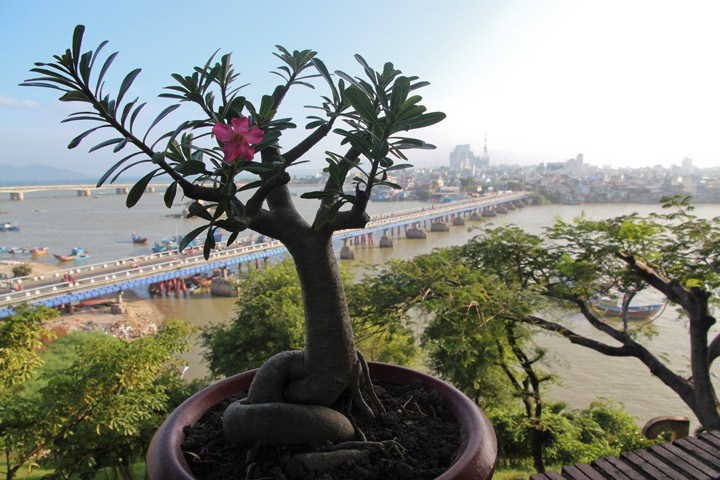 High on a hill and cooled by the breeze, we could immediately see why this peaceful spot was chosen for worship. Today it looks down onto the busy beach town of Nha Trang, but once upon a time the view of islands and ocean must have been inspiring. 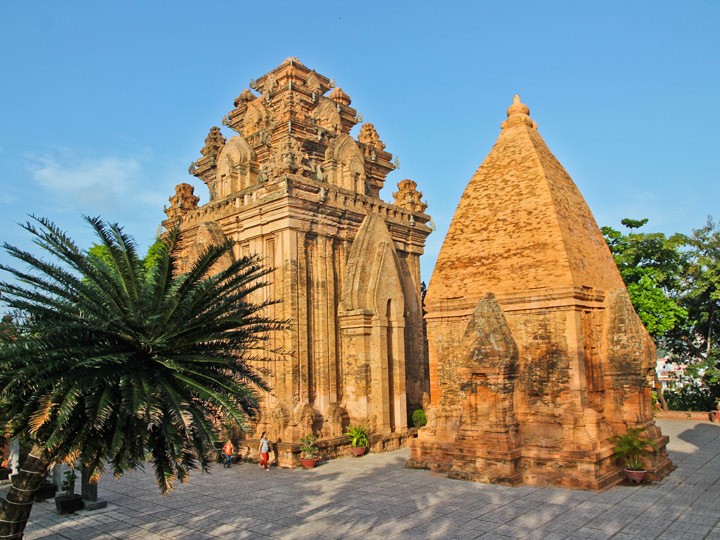 The site is fairly small and you will only be able to enter the towers if you are dressed appropriately, which we unfortunately were not due to the impromptu nature of our visit. 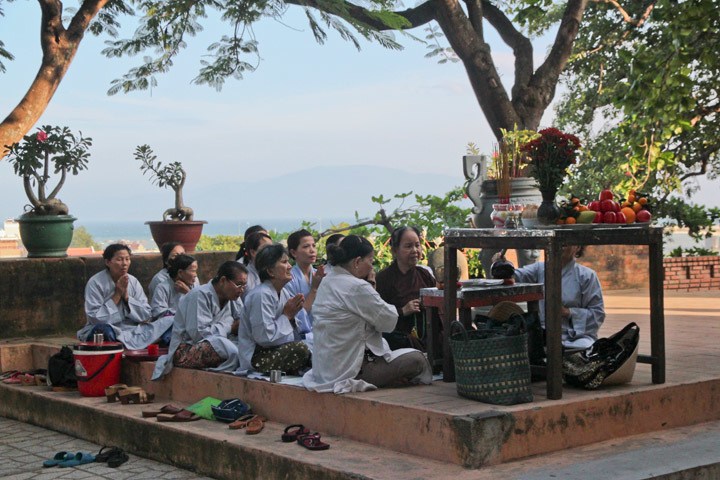 The beautiful views, the peaceful atmosphere, the groups of chanting Buddhists, the beautiful architecture steeped with history- this was the Vietnam I had pictured in my head. 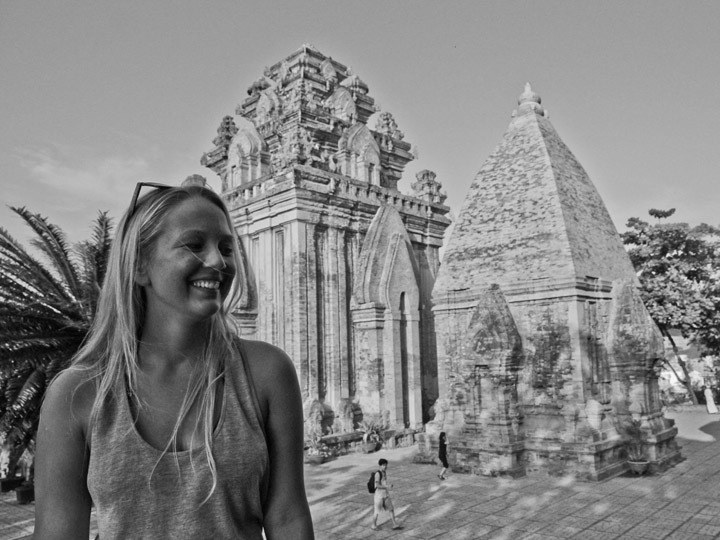 And the Nha Trang adventures continue…