I used to be a voracious reader. In a way, I still am- however, books and magazines have been replaced by blogs and websites in my current nomadic lifestyle. I want to get back to the good stuff.

Unsurprisingly, travel literature has always been my favorite genre. There’s nothing like Paul Theroux’s The Great Railway Bazaar

“Nowhere is as it was before.”

I picked up Tiger Balm by Lucretia Stewart in a roadside market in Cambodia in anticipation of a 5 hour bus ride. It was subtitled Travels in Laos, Vietnam, and Cambodia, and described one women’s travels through Indochina in 1989-90, the year I was born. It seemed a perfect fit for someone retracing a similar route 22 years later. 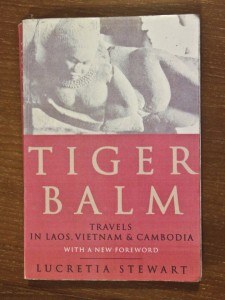 Tiger Balm is broken into 12 chapters describing different portions of the author’s trips to through Laos, Cambodia, and Vietnam. It’s a journey that’s been done millions of times before… so what makes this one special? Stewart was traveling in a politically delicate time when these countries were only just beginning to heal from decades of war, turmoil, and tragedy. In some cases, like in the Mekong Delta of Vietnam, she was the first Western woman to visit since the war.

One of the overarching themes of the book is Stewart’s struggles to cut through the red tape of the time and obtain the necessary permits, visas, and handlers (she was rarely ever allowed by the governments to travel without local guides). I remember complaining about the process of obtaining a Thai visa while in Vietnam- a process that took (gasp!) a whole day. Stewart waited months for a visa to Laos- only to arrive and not be allowed to leave the capital of Vientiane.

But of course as in any travel related memoir the destinations are the real stars. Tiger Balm weaves a delicate story of three countries that despite their unique personalities and individual qualities are bound together forever by geography, culture, and history. As Stewart recounts in a proverb recited to her by an elderly Cambodian:

“The Cambodians plant the rice

The Vietnamese harvest the rice

The Laos watch the rice grow”

As I was traveling through Cambodia and Vietnam while I was reading this book, I got the most enjoyment out of comparing my present day experiences with Stewarts’ from so long ago.

I felt especially vindicated by her uneasy response to Vietnam- one that I ultimately shared. She describes her first impressions on the night of her arrival in Saigon (now Ho Chi Minh City): “I was jumpy, on guard, ready to duck and run.” While she too had ups and downs to her Vietnamese experience, she experienced a sense of desperation when it was time to leave that was all too familiar to me, (who had a mini-breakdown on our final morning.) “For an awful moment, I thought I wasn’t going to be allowed to leave Vietnam. I imagined breaking down into floods of tears and begging the ugly little official on my knees to let me go.” 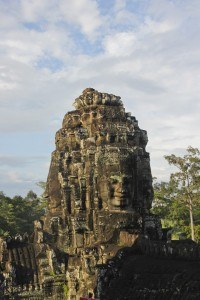 Also similar to me, Stewart has a soft spot for Cambodia. This is a country that seems to have changed almost immeasurably in the past century and I was fascinated by her accounts. Take Angkor Wat, for example. The author describes her parents’ visit in 1953 where they did not see another human for hours (her parents were British diplomats stationed in Southeast Asia). When the author visits, she is accompanied by guards and must be meticulous about following the paths lest she set off one of the landmines sprinkled across the area by the genocidal Khmer Rouge during the civil war. When I visited, our greatest hardship was trying to time our visit to avoid the teeming crowds of the million tourists that visit the site each year.

Some things don’t seem to ever change though, as Stewart observed that Phnom Penh was one of the few cities in the world where there are more than enough taxis… a phenomenon I commented on many times as well, though with less eloquence.

But most of all I enjoyed the way in which the author writes of sense of déjà vu for a time and place that she had only read about… a feeling I experienced when reading this book!

Other parts of the book that had me screaming “yes!” to a silent bus:

• Stewart observes that rice has significance much greater than that of just sustenance in Indochina. She notes that the word for rice in Vietnamese is the same as the word for food, and that a proper comparison for the importance of rice in that culture is to the significance of bread to Catholics. I love this comparison.

• The book is peppered with observations about the way in which delicate Southeast Asian societies interact with their western visitors… in one example she describes the challenge of trying to explaining anorexia to poverty-stricken Lao.

• The author is frustrated when her Vietnamese handlers take her to a crowded dirty beach rather than the pristine beautiful one nearby… she questions whether it is due to the “oriental passion for crowds or the rather blank incomprehension of the joys of solitude.”

• Steward describes a bus accident followed by a plane taking off five hours late. There was “none of the hostility and pent-up rage which is the inevitable accompaniment to any delay or traffic jam in the west. Everyone was interested, concerned, even excited.”

Perhaps this is a cultural gripe (Stewart is British) or a generational one, but certain phrasing made me cringe: using the term “oriental,” or the phrase “going native.”

Most annoying of all however was the frequent use of French that I couldn’t understand… with no translation! They were often long, complex phrases that I had to Google to translate, which is no small task when you are reading on a five-hour bus ride through Vietnam.

There was a fair bit of negativity and annoyance in this book. However, upon reflection I spent a fair bit of time in Vietnam being negative and annoyed so perhaps this is a reflection on my disappointment in myself!

And last but not least… the author described a fair bit of her dream sequences. Maybe it’s just me but… I can’t stand reading about people’s dreams!

Today I’m giving away my copy to one lucky reader! Of course, um, the winner is not actually all that lucky considering the original state of the copy I bought (a bootleg fake common in so many Asian markets) and the hell I put it through dragging it from country to country and marking it up with my notes. But I still think this book can find a happy new home… and I promise to keep next month’s book in better condition!

To enter, simply subscribe to this blog via RSS or email (below) and leave me a comment telling me that you have done so! One Friday I’ll use a random number generator to pick a winner.

Photo of the Week 44 Becoming a Solo Traveler
27 Comments...