Our first day in Dalat was spent exploring the bizarre and kitschy sights around the city. We had planned to dedicate Day two to an exciting new form of adrenaline chasing: Canyoning. Canyoning involves a combination of rock climbing and rappelling backwards down waterfalls. Unfortunately, Dalat was experiencing an unusual cold front during our visit and we no less wanted to touch a waterfall’s icy stream than we wanted to leap off it without a safety harness. Instead, we did the warm person’s version of that: we extended our motorcycle rental another day and drove ourselves from waterfall to waterfall, directly disobeying the orders in TLC’s 1995 Grammy nominated hit Don’t Go Chasing Waterfalls.

Datanla Falls
Our first stop of the day was to nearby Datanla Falls, a popular trip with foreign and domestic tourists. If you thought the Dalat kitsch extended only to man-made tourist attractions, you were wrong. With effort, even waterfalls can be made appropriately tacky. 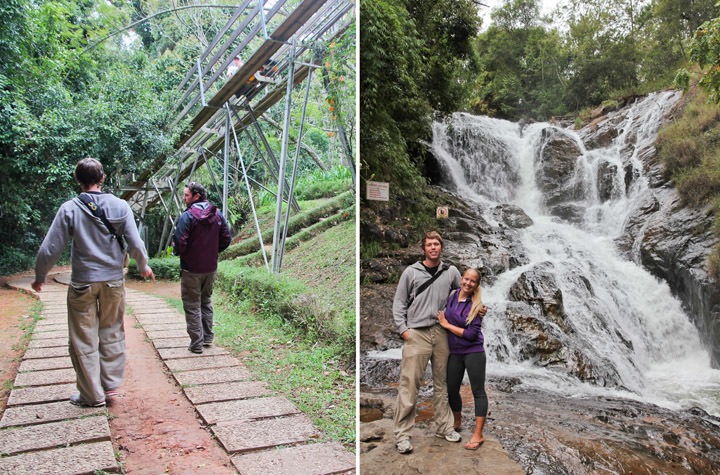 It’s good that they spiced the place up though, because frankly the falls themselves are fairly unspectacular. We still waited our turn in line for the typical tourist waterfall shot, though! 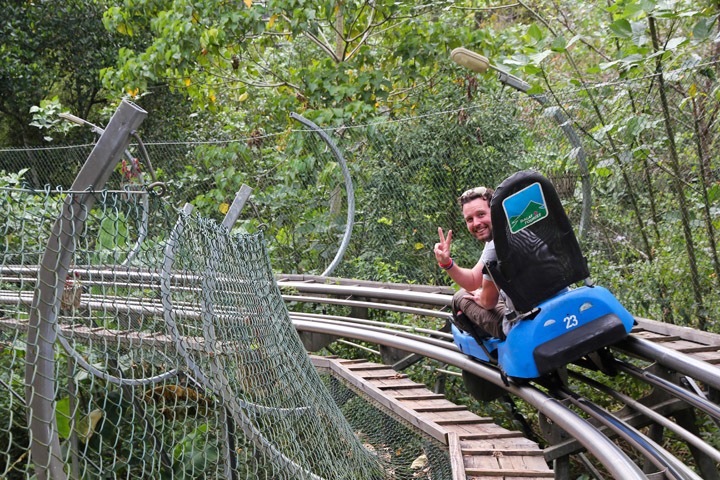 By far the most exciting thing about Datanla Falls is the luge ride. With a lever, you are able to control your own speed completely, which is completely exhilarating. On the downside, you are held fully responsible if you crash into the person ahead of you, which is unfortunate when the Japanese family in front is completely overwhelmed with giddiness when they reach a speed of 2.3km/hour. 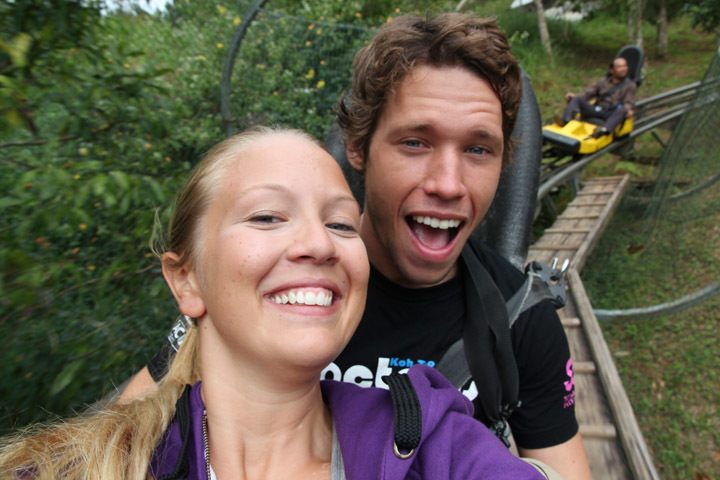 At the bottom of the luge, Mark tried his hand at archery while I considered yet another cable car ride. The Vietnamese must love their cable cars. In the end we did three, each in a different city! 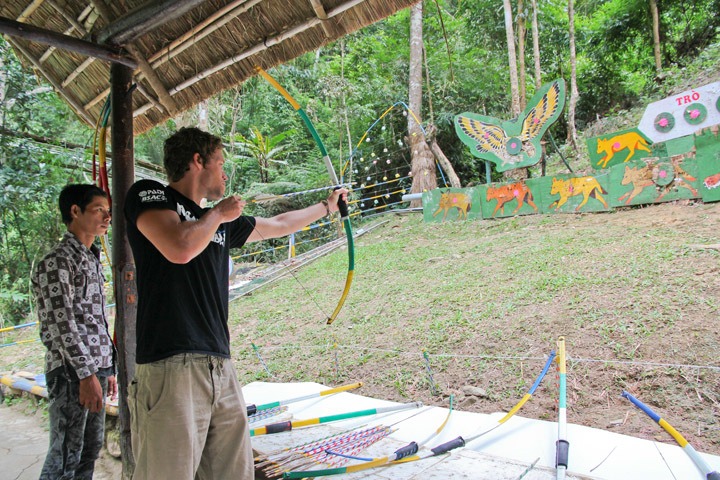 On The Road
Since Datanla was so close to town, it was easy to find on a map. When it came to our next destination, Elephant Falls, things were a bit more tricky. Our guidebook, as well as a map we bought in town, both indicated the falls with arrows pointing off the page with vague kilometer markings and no further directions. 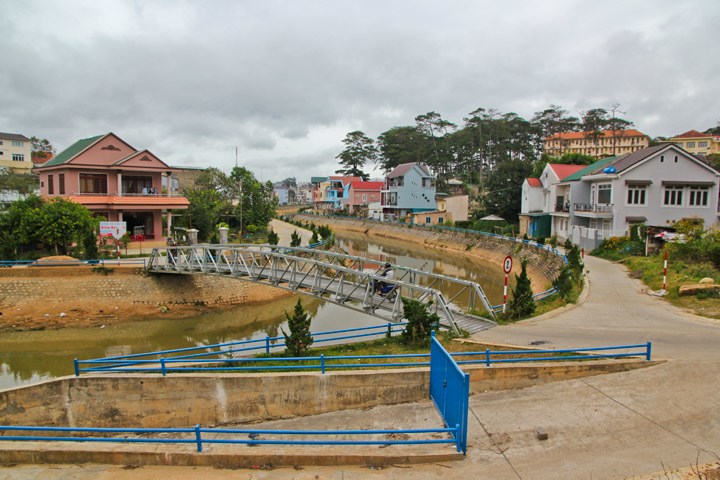 Even on the road, Dalat continued to strike a balance between head-scratching and cute. These adorable pigs crossing the street left me trying to make up a new version of the “Why did the chickens cross the road?” joke. 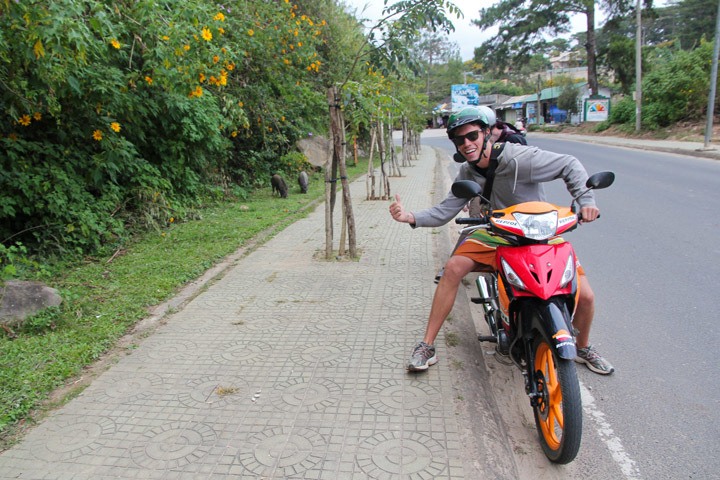 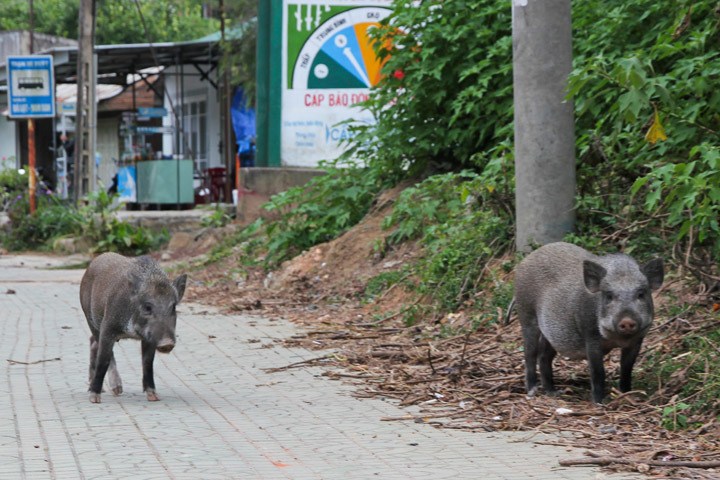 Dalat’s fame as a produce and flower producer made for beautiful city outskirts to drive through. More than once I made Mark pull over so I could marvel at seeing Gerber daisies, roses, and even poinsettia growing both in greenhouses and wild on the road. 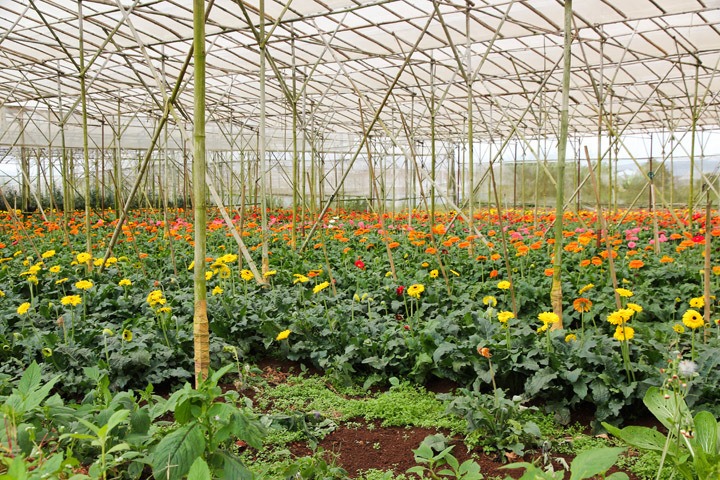 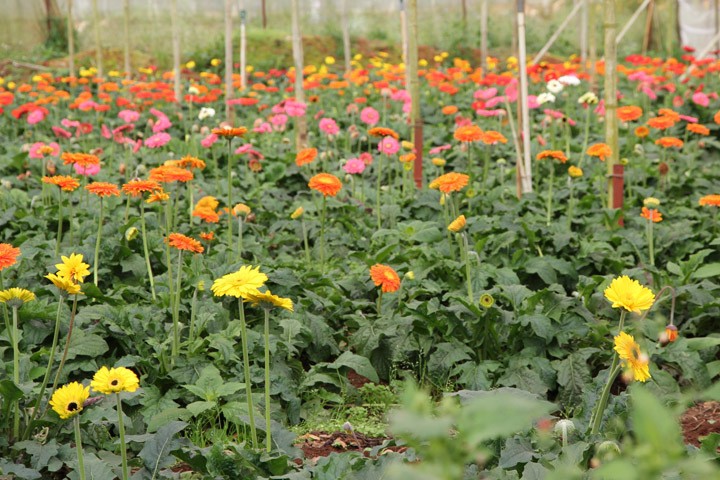 While we sadly did not get to do our dream trip of motorcycling down the length of Vietnam (this time, anyway!) on this day we got a little taste of how beautiful it would be. The provincial scenes we were zipping by were the Vietnam of postcards and poetry. 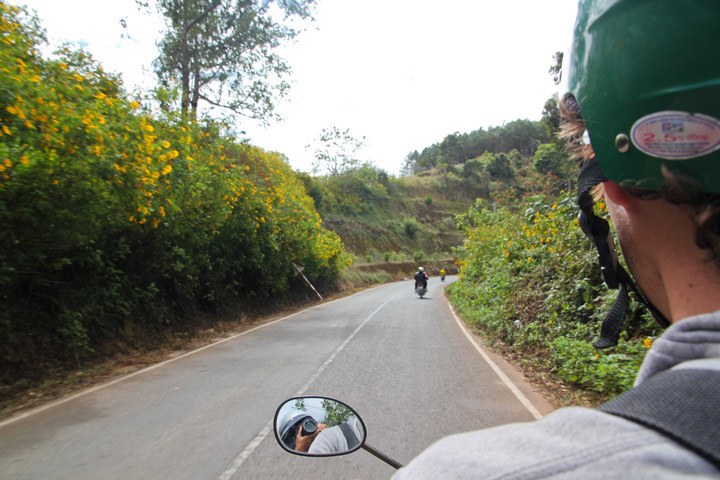 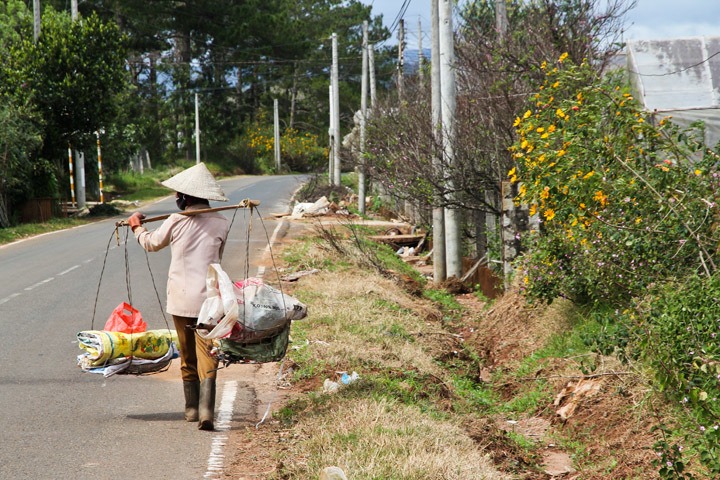 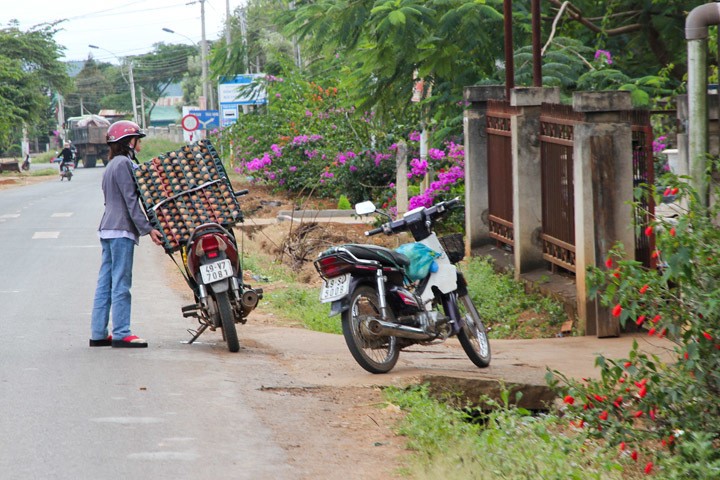 Of course, we still had not so much as a clue as to where we were headed. Whenever we came to a turn or a fork in the road we would try with a zero success rate to mime “waterfall” to whatever unlucky local was passing by before giving up and going “on intuition.” 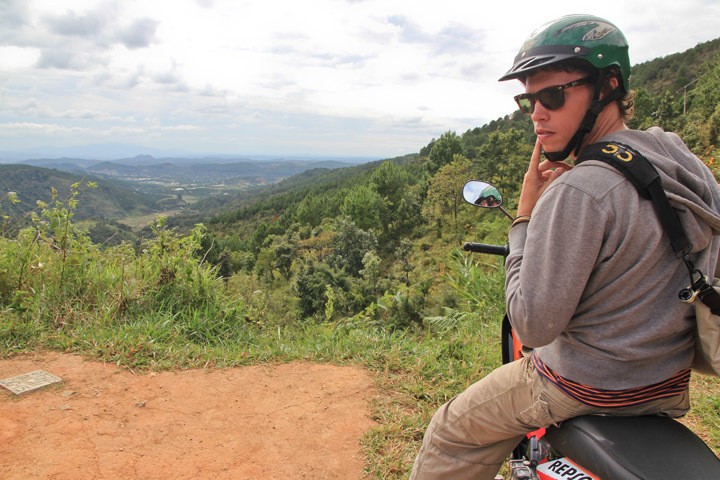 About an hour in we decided that even if our intuition wasn’t leading us to the waterfalls it was at least compensating with some stunning scenery and a fun, meandering downward road. 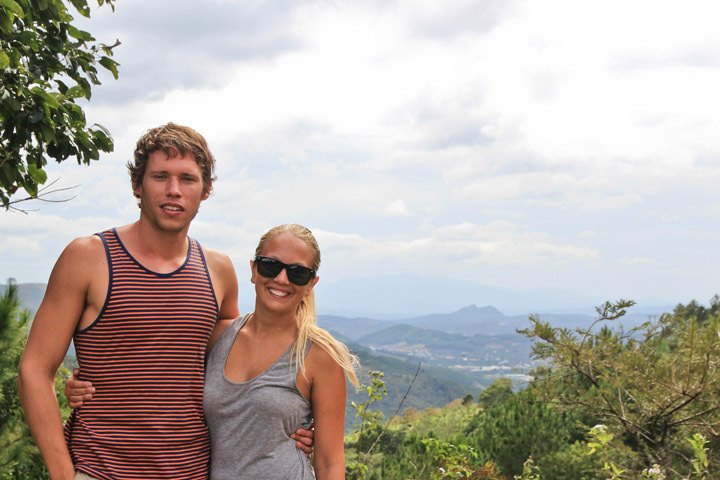 When we stopped to take these photos we were so in awe we all agreed that whether or not we found the falls the day had been a success. Sheer beauty. 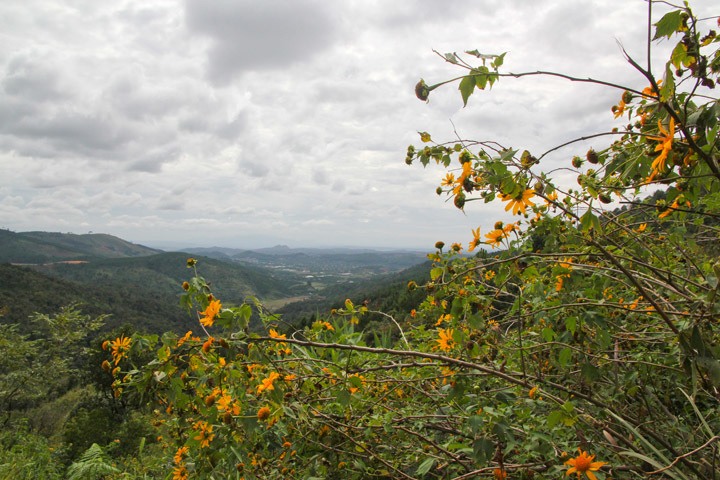 Elephant Falls
But since, as my friend Tom says, fortune favors the brave, we did in fact find Elephant Falls. An enterprising young Vietnamese family had even set up a card table and was charging admission to the supposedly free waterfalls. Lonely Planet now owes me 25 cents.

As we gingerly climbed down the decrepit and ill-placed stairways, we realized that admission was not going towards upkeep. But the journey and the ticket were a small price to pay for the thundering show of mother nature’s power that awaited us. 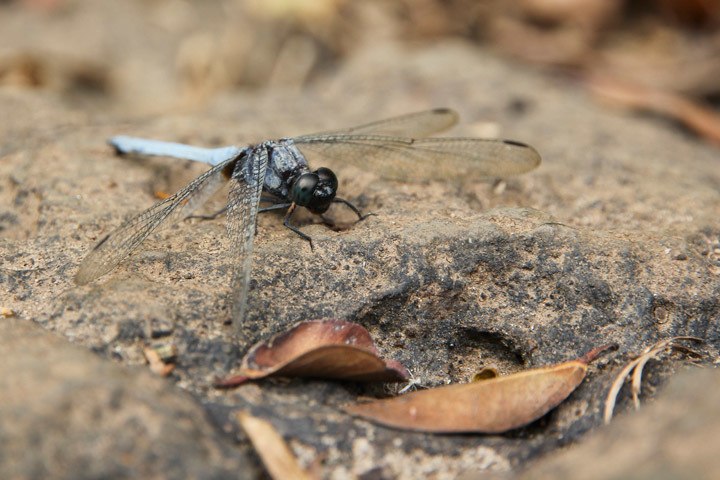 Unlike our first stop of the day, there was nothing to distract us from simply sitting and soaking it in, both literally and figuratively. I will always remember feeling so impressed at that moment. Both by the amazing waterfall in front of me and the sense of adventure we embraced to travel for 90 minutes in what could have been the completely wrong direction in order to get there. 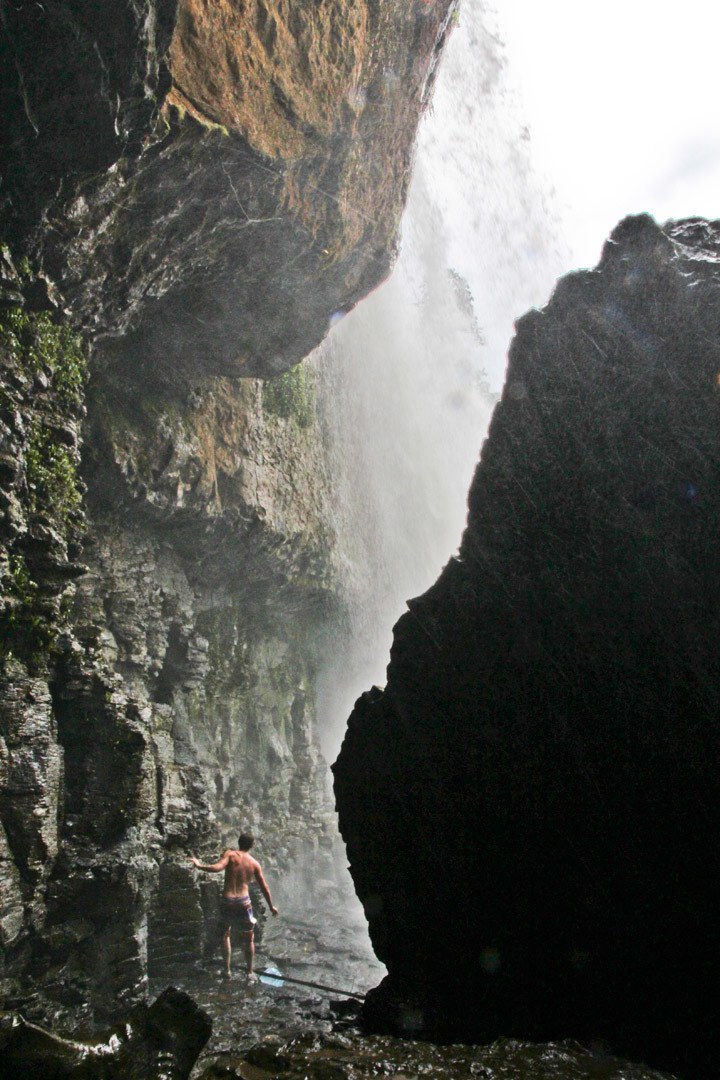 It was a beautiful day. I like to think that perhaps even TLC would have approved.

Photo of the Week 32 Windsurfing in Mui Ne
28 Comments...