It was my last day and night in the Bahamas and Mark and I still had our casino winnings burning a hole in our backpacks. We talked about putting it towards a plane ticket for him to visit me, or splitting it and putting it in our saving ($360 goes a long way in South East Asia!) but none of that seemed a fittingly exciting way to spend it, considering the dramatic way we earned it.

So we went back to the place it all began: Atlantis. 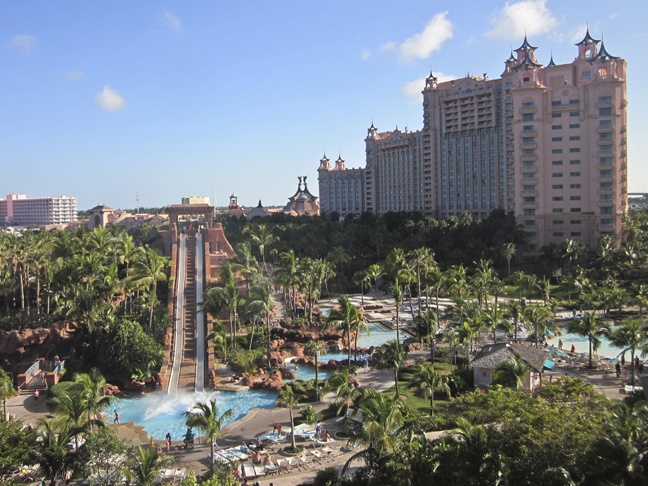 Well, not Atlantis exactly. We checked into the adjacent Paradise Island Comfort Suites, which is about as glamorous as the name Comfort Suites conjures. At $365 a night, it was by far the most expensive hotel room I’ve ever paid for, and the room itself it was laughably not worth it. But you aren’t paying for the room itself, rather the fact that they offer Atlantis day passes for both the day you check in and the day you check out. Atlantis day passes run $110 a person, so if you are planning on spending two days there with two people, you can actually save money by getting a hotel room for the night, not to mention free breakfast. In our minds it was all “free” since we were paying with our surplus casino winning! Easy come, easy go. 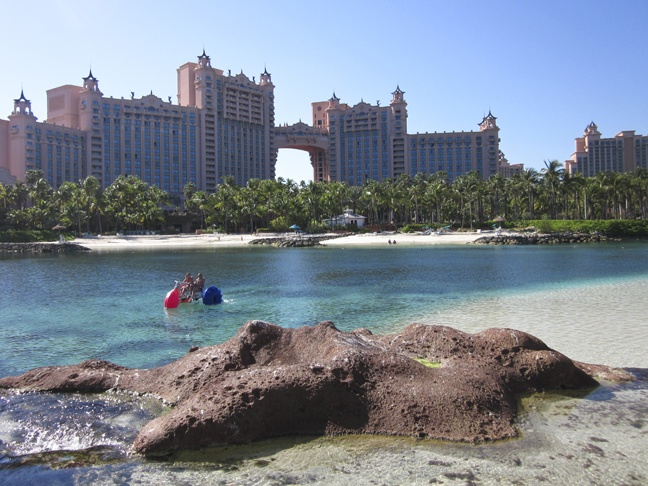 Checking into a real hotel always makes me feel like a real live grown up. I feel like I’m always expecting someone to ask for my identification, and maybe my bank statements. After we checked into our room I made sure to jump on the bed a bit to shake off the feeling. Then we ran like giddy children to the Atlantis Water Park. 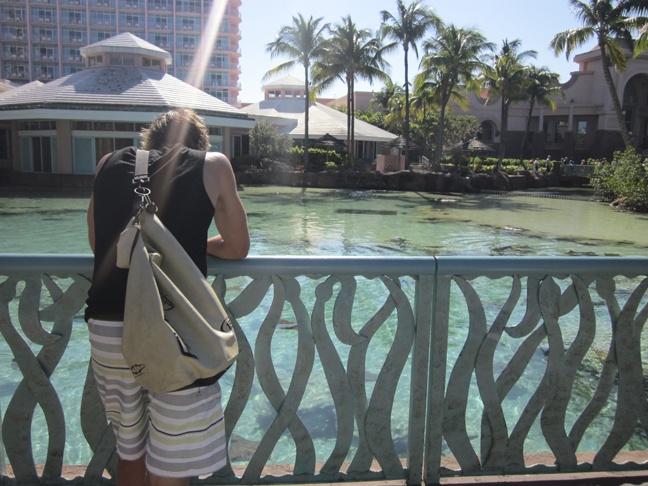 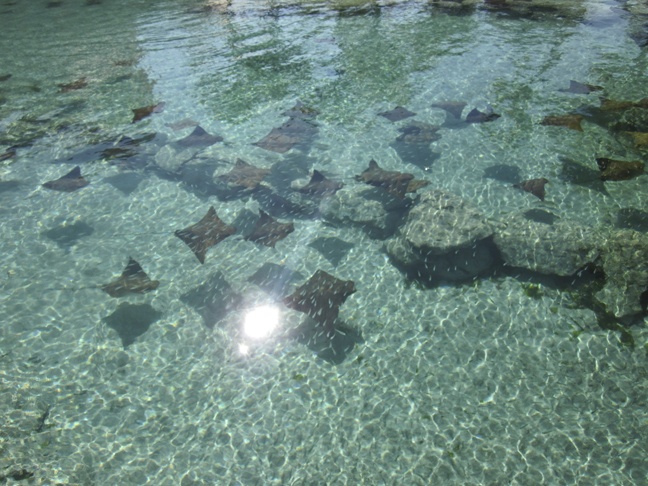 I love that a place as big and corporate as Atlantis Resort has a sense of humor in their signage. And also a no smoking policy. 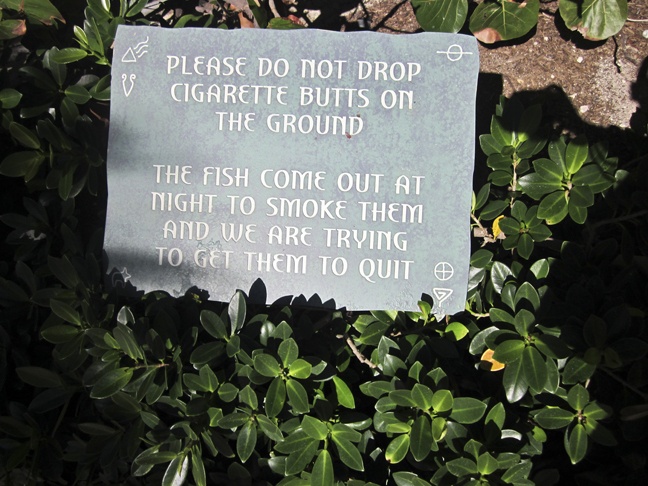 The grounds of Atlantis are enormous, big enough that we often had to refer to maps to figure out where we were. One of the biggest attractions is The Dig, a 2.5 million gallon aquarium, which claims to be the largest in the world, though a quick google search pulls up several competitors. I don’t think the Georgia Aquarium can compete with the theme running through The Dig, which is styled to look like an excavation site of the lost city of Atlantis. 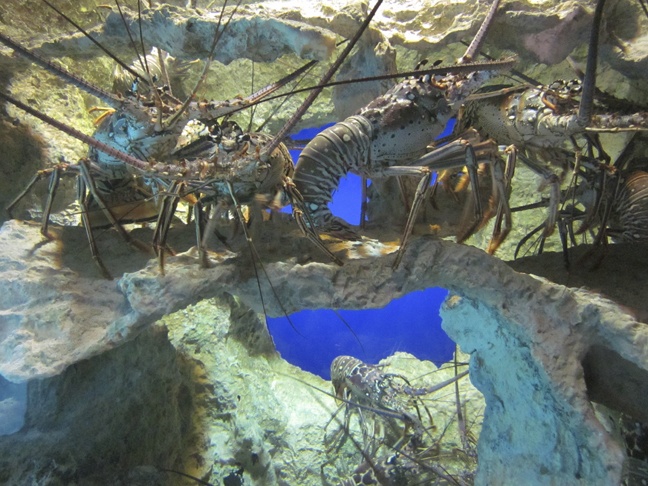 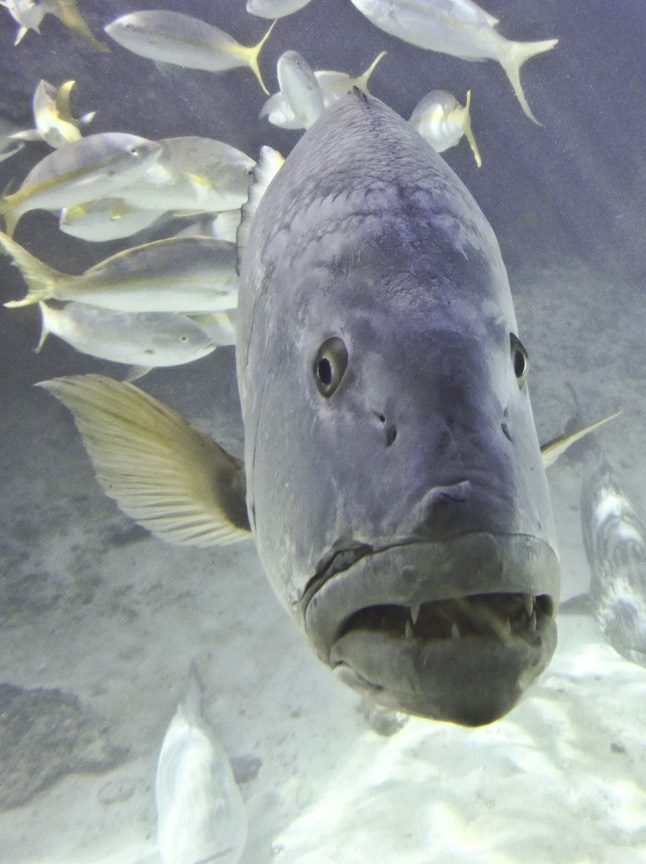 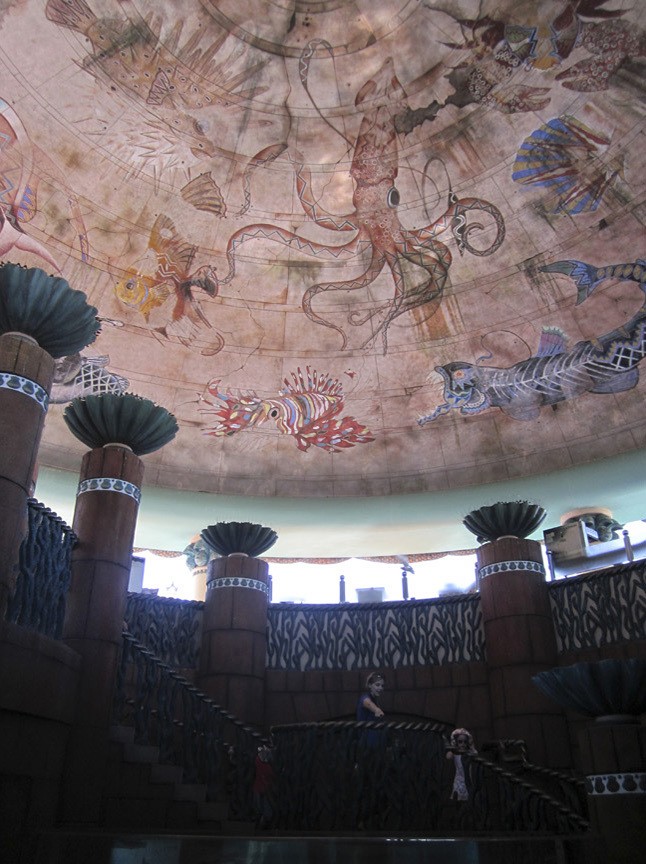 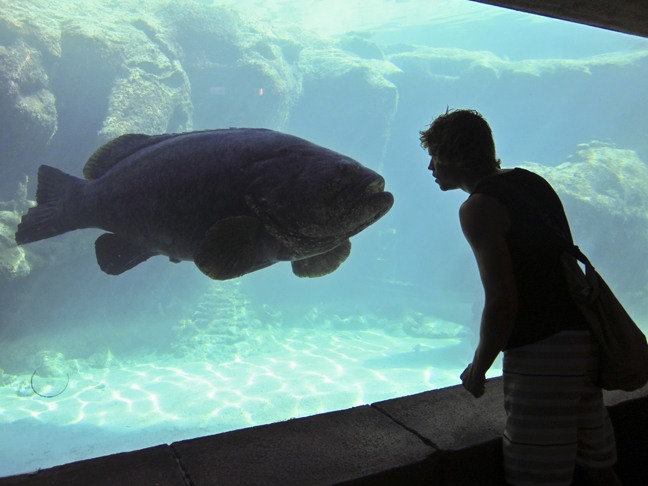 Once we had our fill of fish it was on to Aquaventure, the 63 acre water park. I was worried that the thrill of it all would be diminished in the 8 years since I came to Atlantis with my family, but I was so wrong. Water parks are just plain fun. I don’t know if I would have enjoyed it quite the same had I paid $110 for a day pass, but since it was “free” we felt like kids in a candy shop. 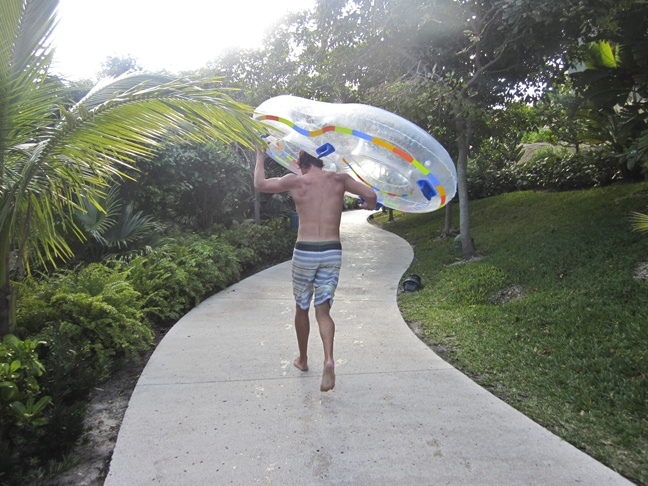 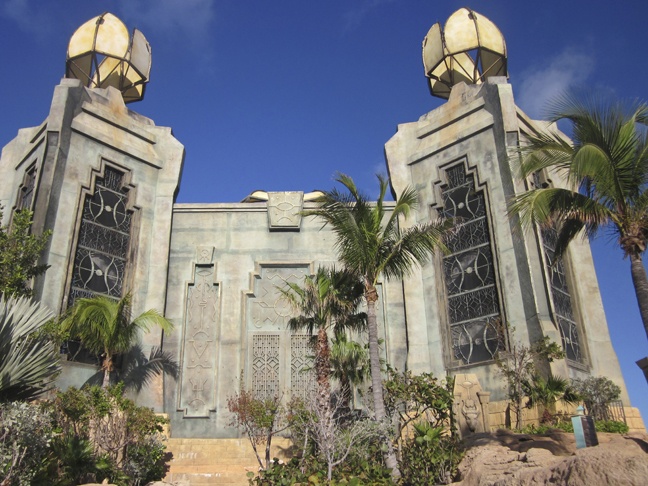 For hours we sailed through dark tunnels in inner tubes, jumped down near vertical water slides and swirled around the lazy river. 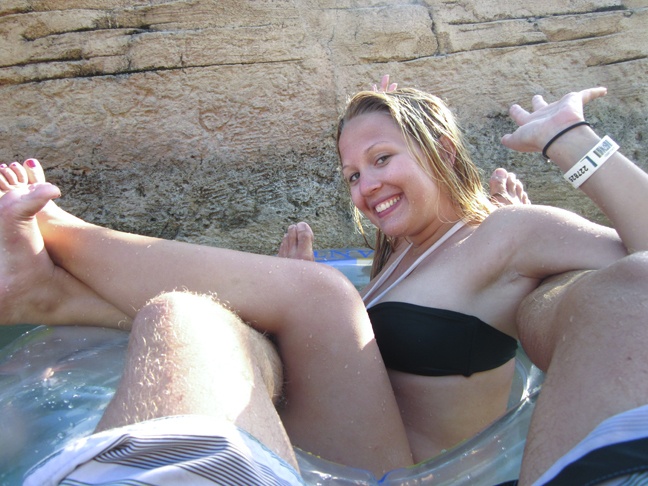 It’s funny, with everything going on at the water park, you can easily forget that there is an insanely beautiful beach just strides away. This is the view from the top of the tower you see above. 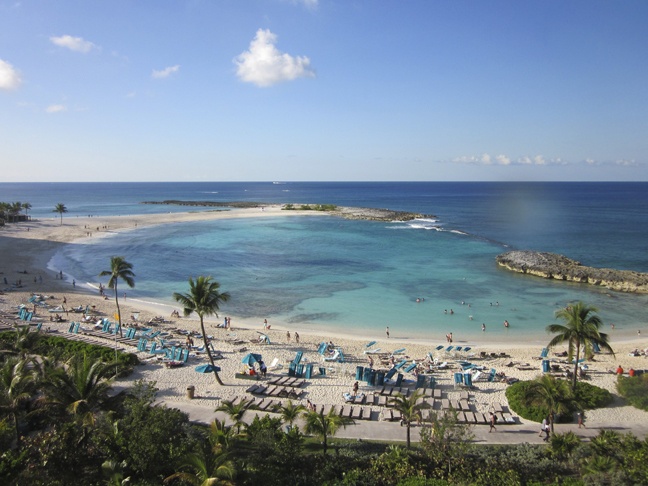 After the water slides closed, we were ready for relaxing. Atlantis is full of shallow pools and tucked away hot tubs, which we thoroughly enjoyed for the five minutes we were there before being surrounded by small shrieking children. And that was enough of that. 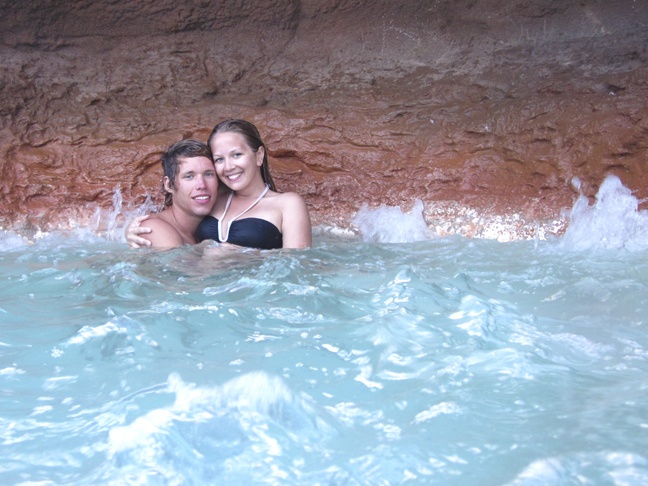 We walked towards The Cove, where there is an adult only pool, but at this point the sun was starting to set. We watched the sunset from the completely empty rows of chairs lining the beach, and marveled at what a crazy week it had been, from living in a teeny bunk for a week and sailing through uninhabited cays of the Exumas to wandering the streets of tourist haven Nassau to spending a day at the biggest resort in the country. I was sad to be leaving the next day, but if I stayed I wouldn’t know how to top what we had already done! 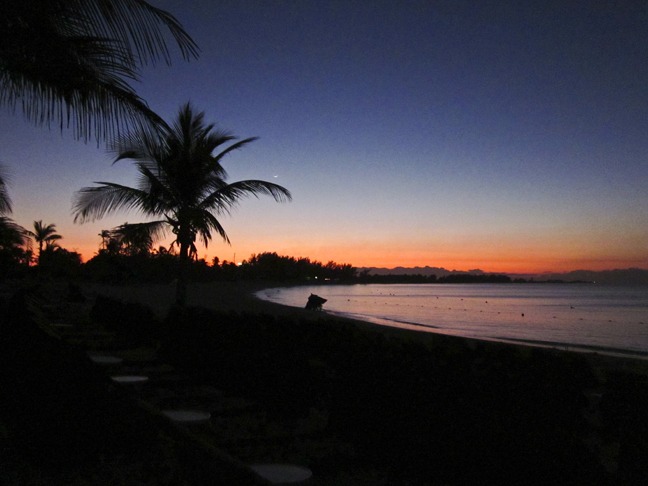 And with that, it was Bye Bye Bahamas. Hope to see you soon.