Though whale sharks and manta rays had eluded us, I would rate our first day in Coiba National Park with Scuba Coiba as a pretty solid awesome — we’d swum with a school of thousands of jacks, spotted four frogfish, frolicked on idyllic abandoned beaches, watched dozens of white tip reef sharks slink by, met a majestic turtle and a few shy seahorses, and then slept on an uninhabited tropical island shared by cheeky monkeys and one famous crocodile. Could day two possibly top it?

Diving Coiba is more like a dare than a vacation. It’s demanding diving, and you just can never know while suiting up if there’s going to be a payoff for the challenge ahead. On this day, I would experience both outcomes — my favorite dive of the trip and one that left me in tears. 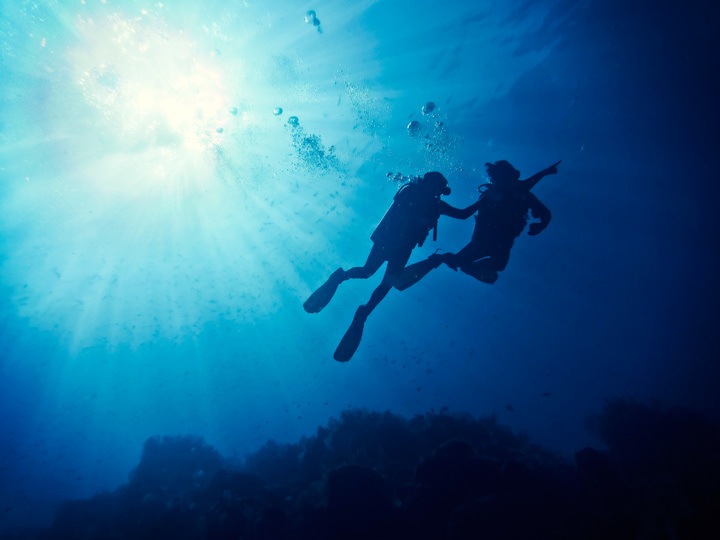 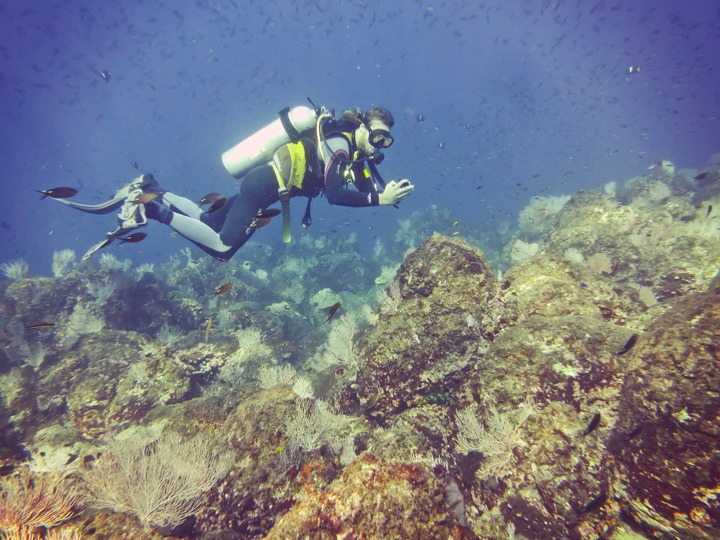 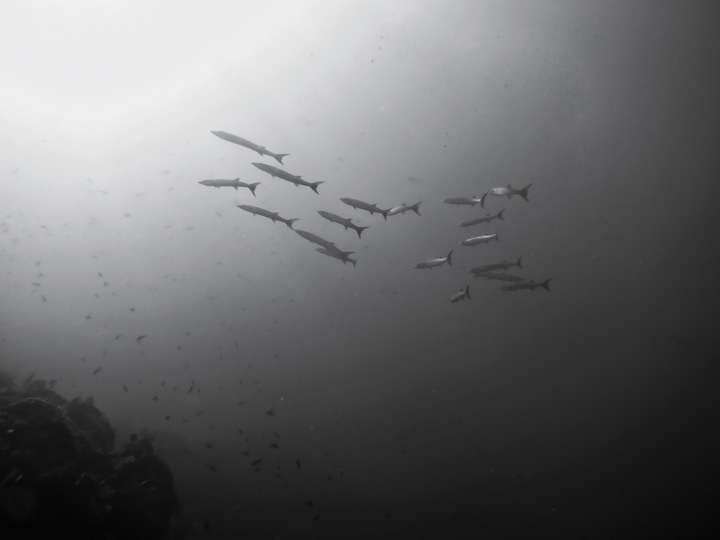 Our first dive site of the day was Dos Detas. This is one of the most popular dive sites in Coiba and for good reason — the coralscapes were the lushest we’d see anywhere. One thing to note is that we only knew it was popular because our dive guide told us so. We didn’t see other divers outside of our group underwater for the entire four days. Crowded dive sites? Not on the Pacific side of Panama.

Though visibility and temperatures were low I really enjoyed this dive. The currents we manageable and we were surrounded by life including schooling barracuda, lovely lobsters, colorful sea stars, and juvenile angelfish. 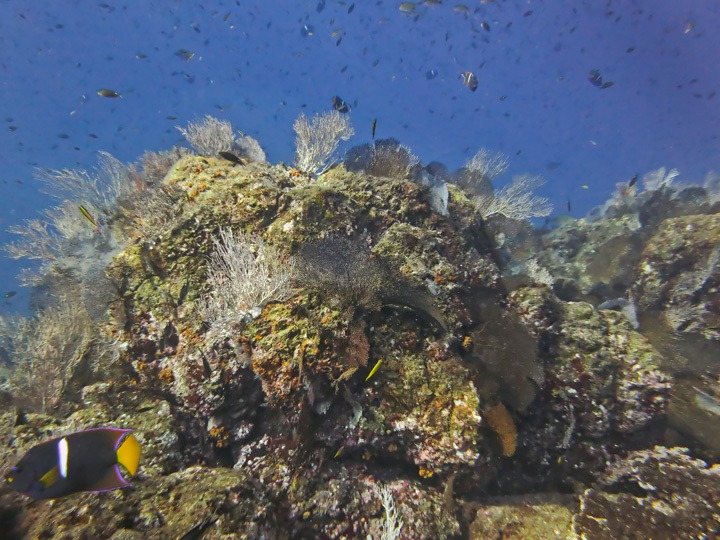 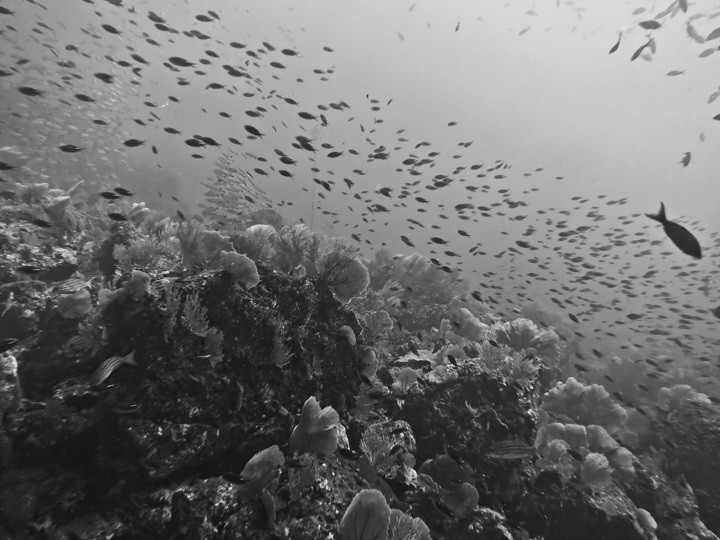 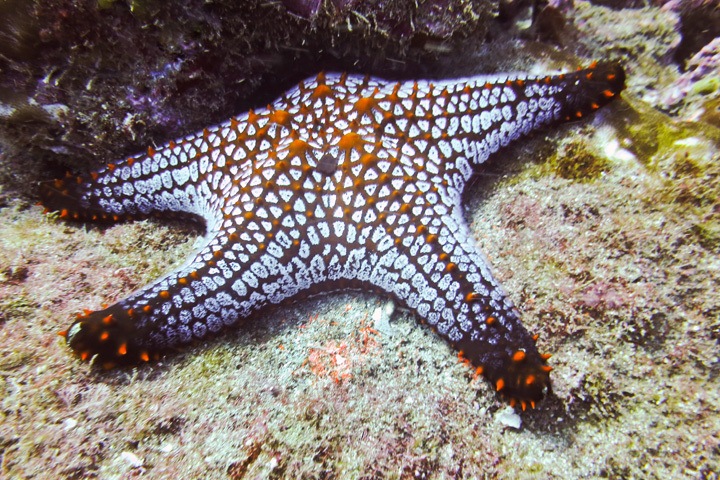 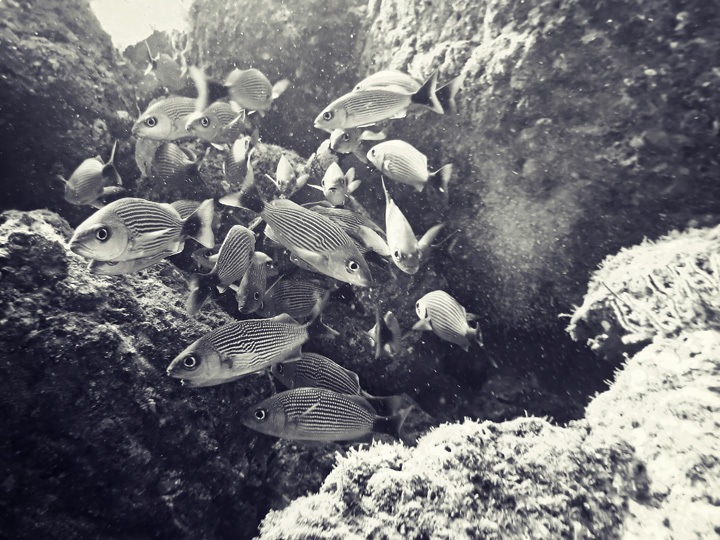 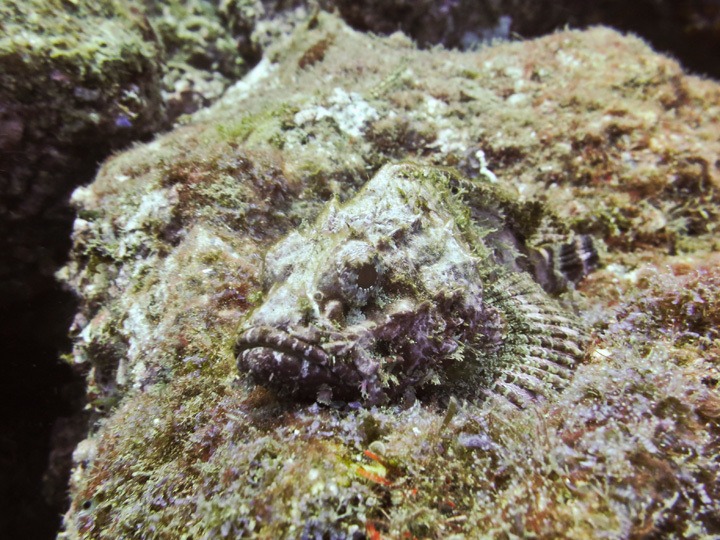 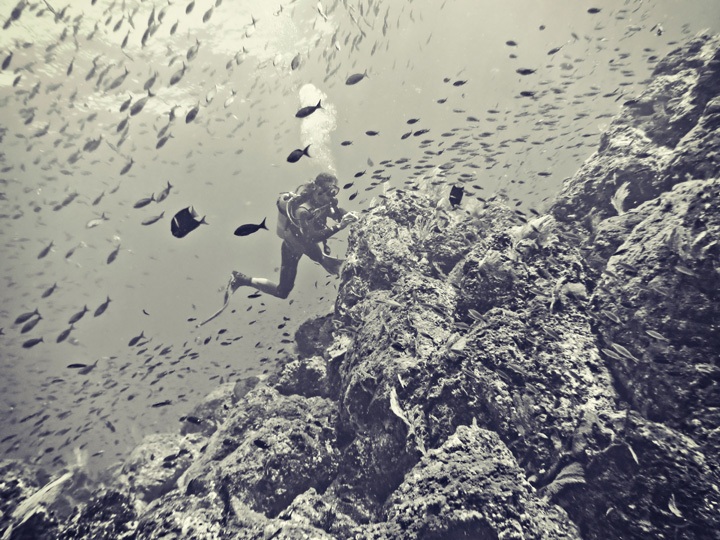 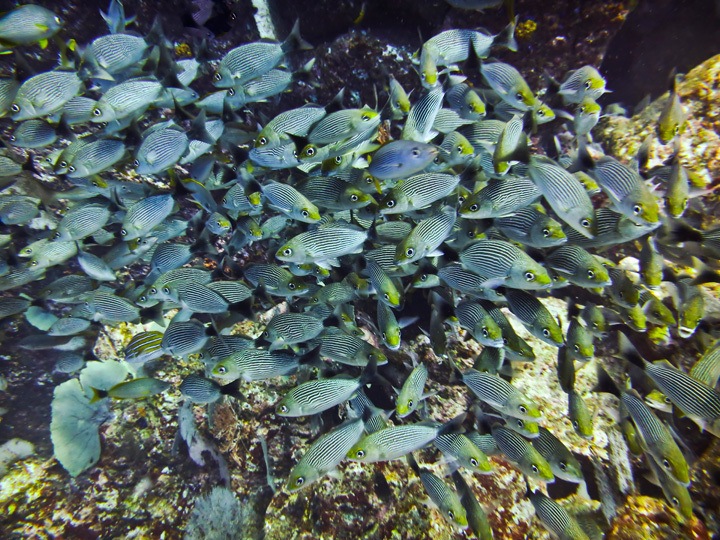 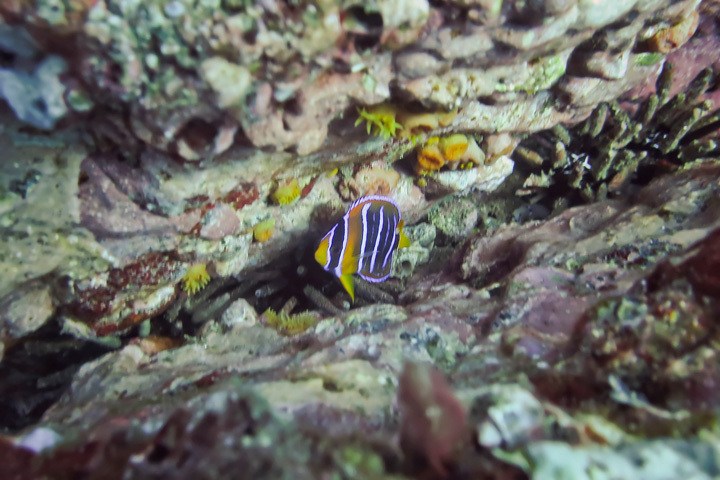 And then onto what was becoming one of my favorite bits of the day — drying out between dives in an idyllic little inlet somewhere. Napping was only interrupted for scarfing down snacks while assuring each other of how many calories we had burned on such a strenuous dive.

I really loved my fellow divers in this group and one of my great regrets of the trip is I never got a group picture of all of us. It was a great group, from the Dutch couple who live on a houseboat in Amsterdam to the Swiss woman who’s family had sent her on a revival of the kind of solo backpacking trip she loved in her younger years, in celebration of her 50th birthday. 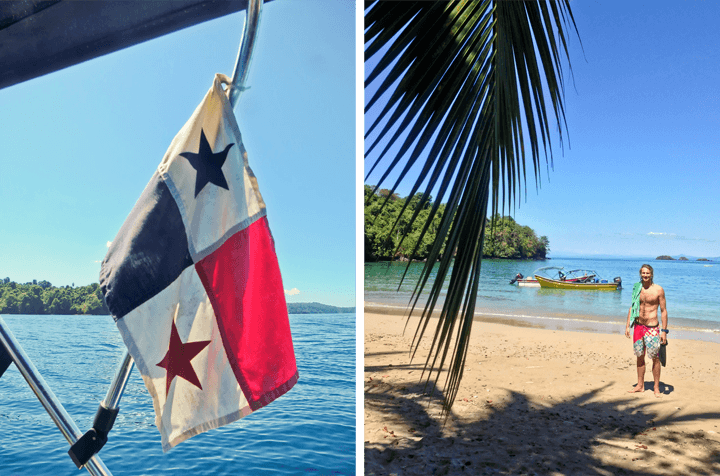 Our next dive site was Santa Cruz. This was my favorite dive of the trip sheerly for the happiness I felt while I was on it. The conditions were above average — as in, no deadly thermoclines that had me dreaming of the idea of feeling warmth again — and there was again a nice showing of healthy corals. 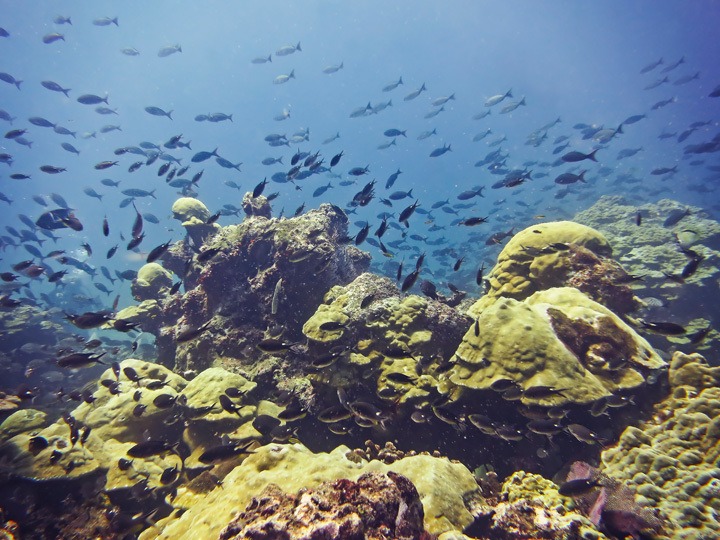 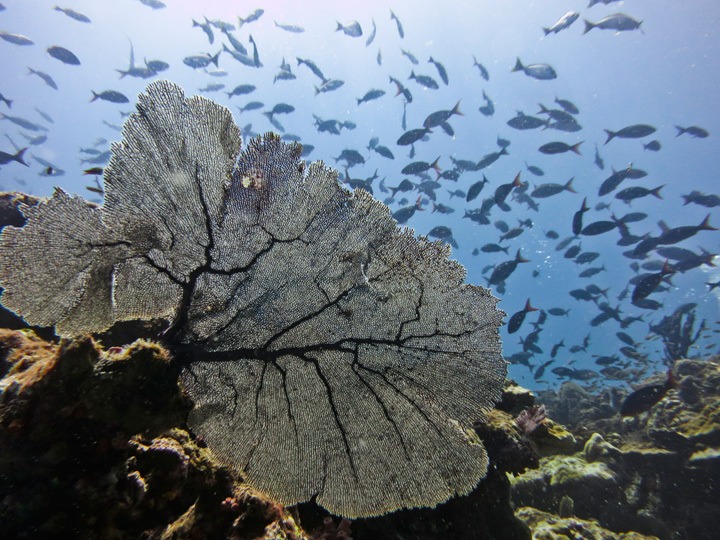 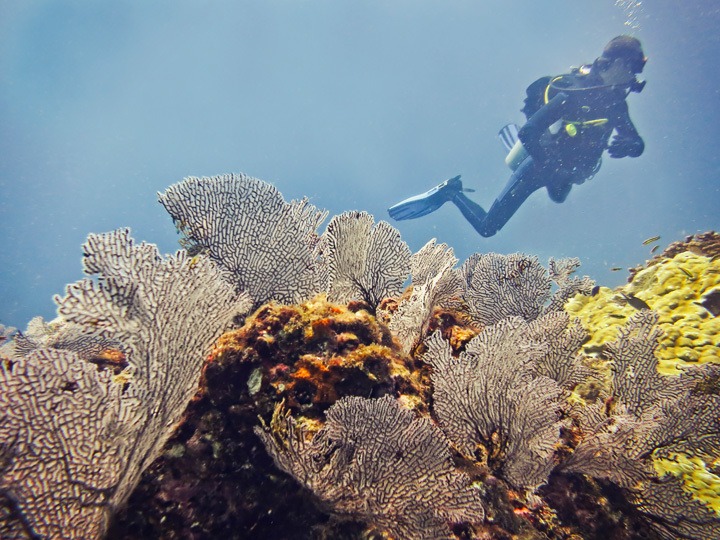 We came upon a lull in the dive and I started glancing at my dive computer with increasing frequency. And that’s when I saw him. The diver-sized goliath grouper floated ever closer, an anxious band of small yellow minnows dancing around him. I was so transfixed I could barely get my camera out, and those minnows didn’t make setting up a money shot any easier. It was one of the rare moments I wished I was shooting video instead of photo — the motion was simply impossible to capture in a single frame. Every diver has some fish that they are just inexplicably into. These lumbering giants are one of mine. 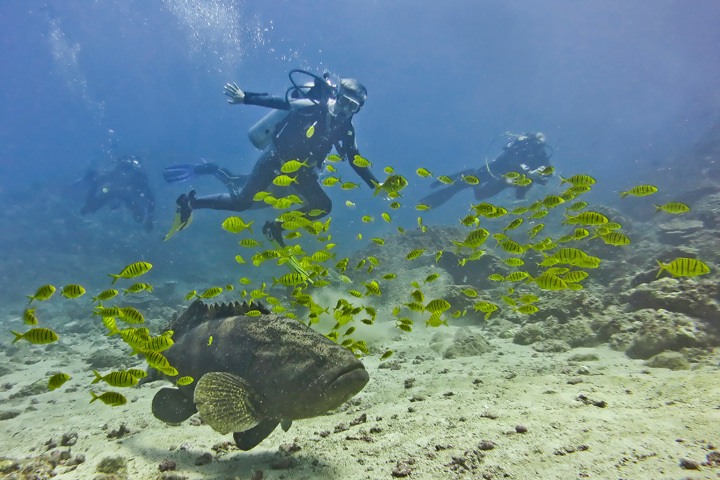 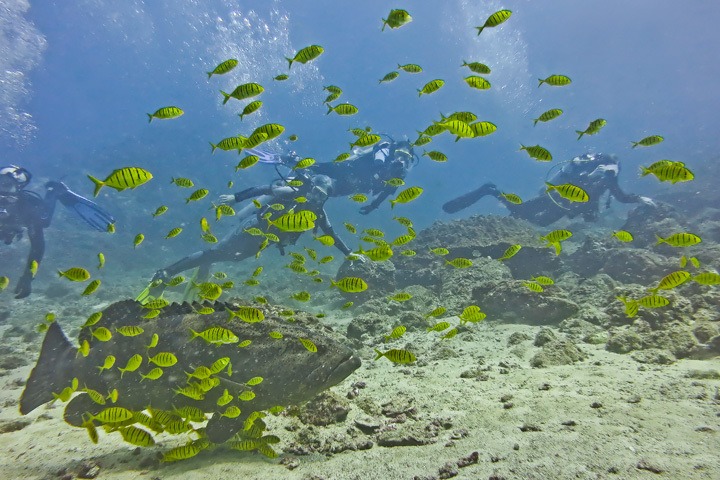 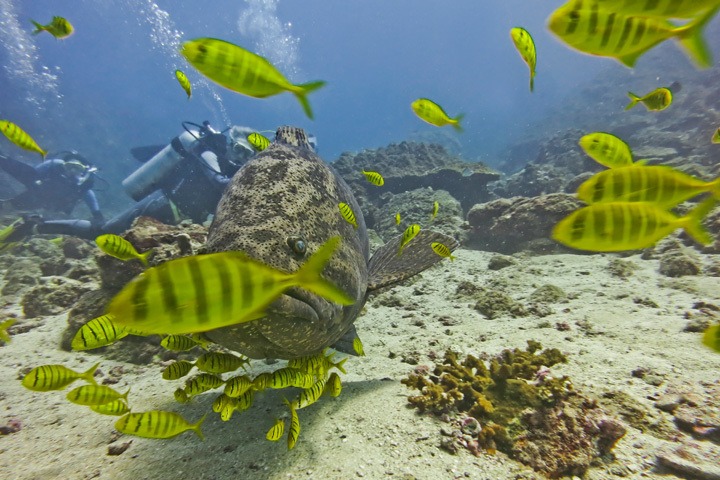 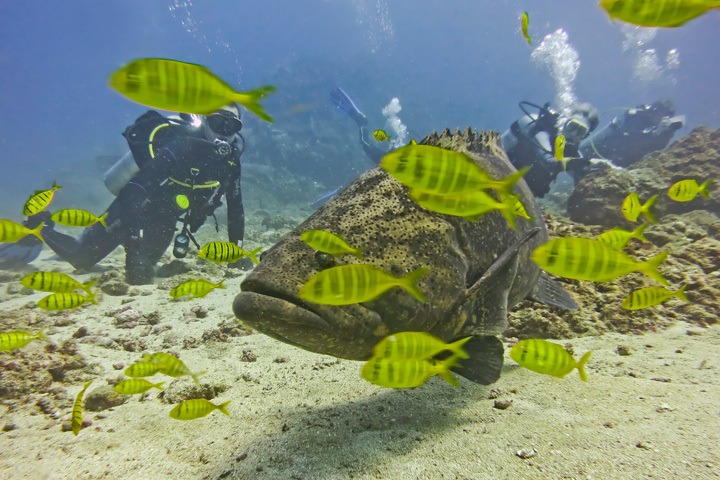 Just as I turned to watch the goliath grouper fade into the distance, I was startled by a busy sea turtle breezing by on the way to what I’m sure was a very important meeting. Yup — this was why I came to Coiba. 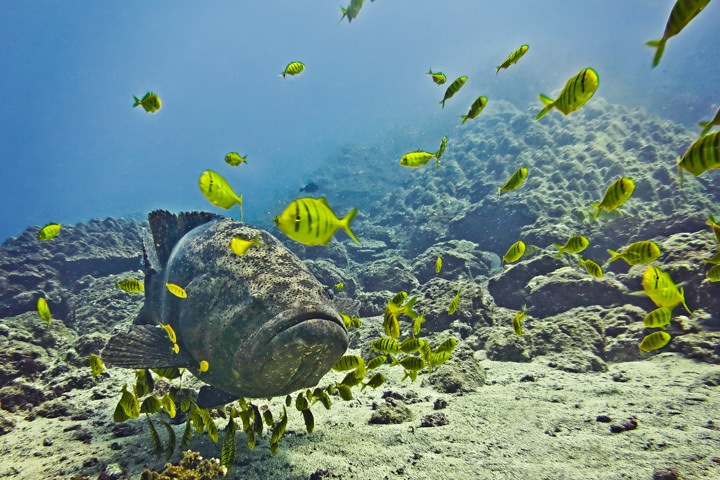 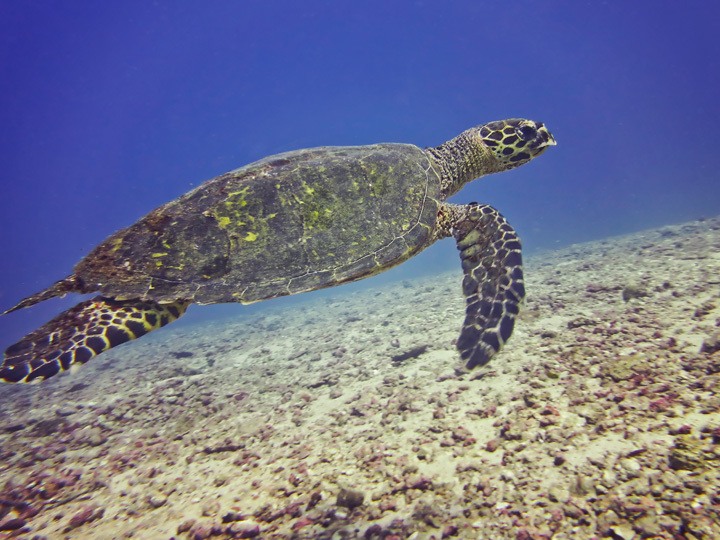 Back at the ranger station, we enjoyed another tasty meal — so good, in fact, that the island’s resident cheeky monkey population popped by to see if there were leftovers. After lunch I was heading directly for the hammock — I swear, when I wasn’t eating or underwater on this trip I was sleeping — when Anders intercepted and insisted we hike to the island’s viewpoint. I was feeling a little guilty about how little dry land exploring we had done, so I reluctantly agreed.

After a short but strenuous 30 minutes, we were staring back down at our beautiful beach. And then it was time to sprint back down, lest we miss the third dive. 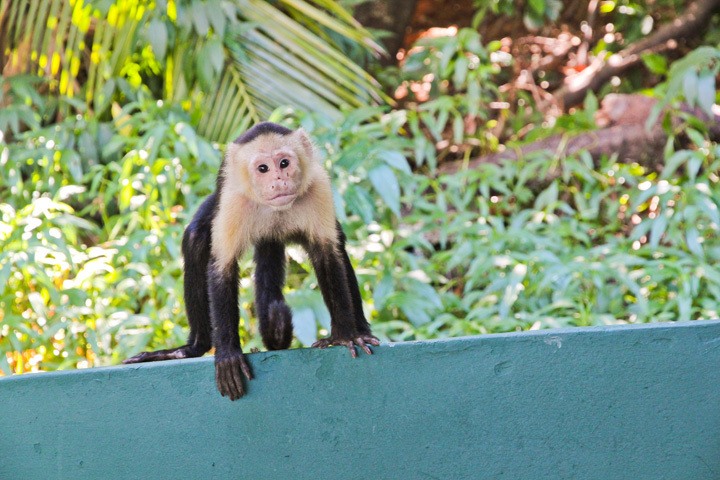 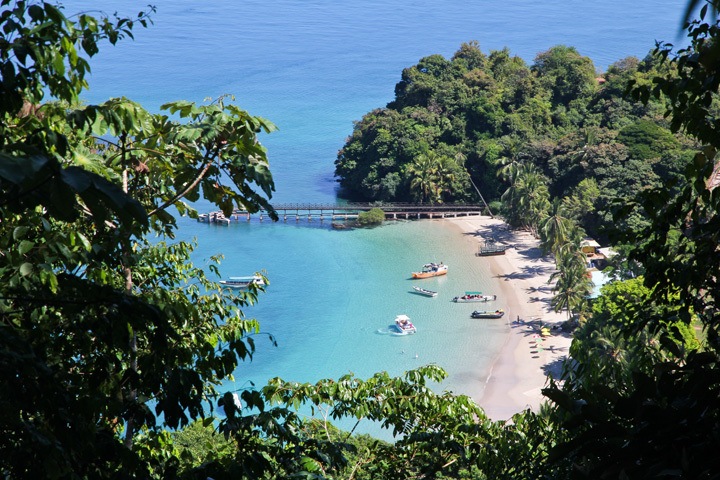 In retrospect, it probably would have been best if I had missed it. Our final dive of the day, Frijoles Island, did not go well for me. Thus far, the currents had been strong but generally manageable. I knew this dive would be different before we even descended. As we geared up and entered the water one by one the currents were too strong to even swim ourselves to the buoy line — instead, one of the crew had to throw up a rope and drag us to it. I was one of the first in the water and it took all my arm strength and plenty of wincing to keep hold of the barnacled buoy line until the rest of the group was ready to go. By the time we started to descend I was already exhausted and on edge.

The descent was a brutal fight against the line, and once we reached the bottom we had to swim directly into the current in the worst visibility we’d faced so far. We were headed for the rounded corner of the pinnacle, at which point, we’d been promised, things would ease off. The force of the current was so strong that not even our experienced dive guide could swim into it — instead, our entire group was reduced to slow-motion underwater rock climbing. We’d grab a rock, use all our strength to pull our bodies forward against the raging water, rest for a moment, grab another rock while our hands were rubbed raw, and do it again. It was a perfect storm of disasters — my fingers were being sliced open by the jagged rocks I was clinging to, my mask started to fog uncontrollably while I had no hands to clear it, and I lost sight of Anders in the chaos.

My heart rate was rising, my breath shallow and rapid-fire, and tears were welling — I was having a panic attack 150 feet underwater. Thankfully I have enough experience with both anxiety and diving to know how to self-soothe even under unthinkable conditions. I made peace with the face that my vision was limited and my hands were bleeding in shark-infested waters and focused every ounce of energy I had on returning my breathing rate to normal until we got around that corner. Finally we did. Somehow I made visual contact with Anders, who immediately sensed something was wrong and returned to my side. I squeezed his hand with an unspoken signal — don’t let go. He didn’t, and for the remainder of the dive I stared into the blue and barely even kicked, just letting Anders guide me along while I mentally decompressed from the state I had just been in.

I came up from that dive emotionally and physically exhausted, relieved it was over, and humbled by the reminder that diving can be a dangerous and extremely difficult sport. And rather than beat myself up over being overwhelmed by incredibly challenging conditions, I’ve tried to be proud that I didn’t let my panic get the best of me, and learn from the situation.

I have just one photo from this dive, one I honestly can’t even remember snapping. It’s quite fitting though, as this bewildered little blowfish looks exactly how I felt in my catatonic state. 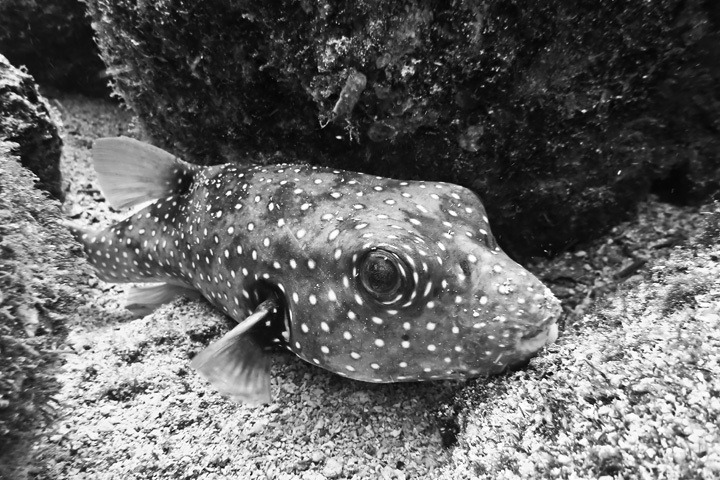 Diving Coiba is a dare. While I lost the challenge on that final dive of our second day, nothing could keep me out of the water for long. Stay tuned for the coverage of our final two days of the trip.

Have you ever panicked underwater? What was your most challenging dive?

Many thanks to Scuba Coiba for their hospitality. As always, you receive my thorough and honest opinions regardless of who is footing the bill.