In Search of Electrolytes in El Tunco

As I waved the last of my New York friends goodbye, I mulled my next move. Equilibrio was over.  El Cuco, for all its charms, was no longer an option after ten days without viable internet. Guatemala was calling, yet I wasn’t quite ready to leave El Salvador.

And so I made my way just a few hours North to the bustling surf town of El Tunco. 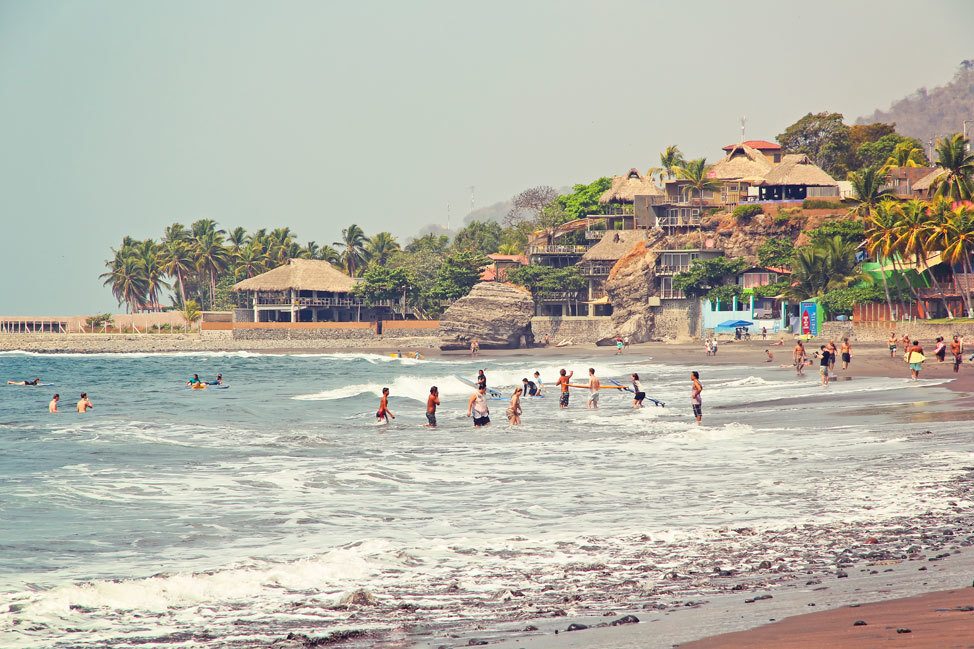 When I say bustling, I should quantify that by El Salvadorian standards. For this tiny, oft-forgotten-on-the-itineraries-of-backpackers Central American country, El Tunco is a powerhouse of tourism foreign and domestic. But, to most, it’s still just a tiny two street town with one crescent-shaped beach, a handful of hostels, and a small but lively bar and restaurants scene. 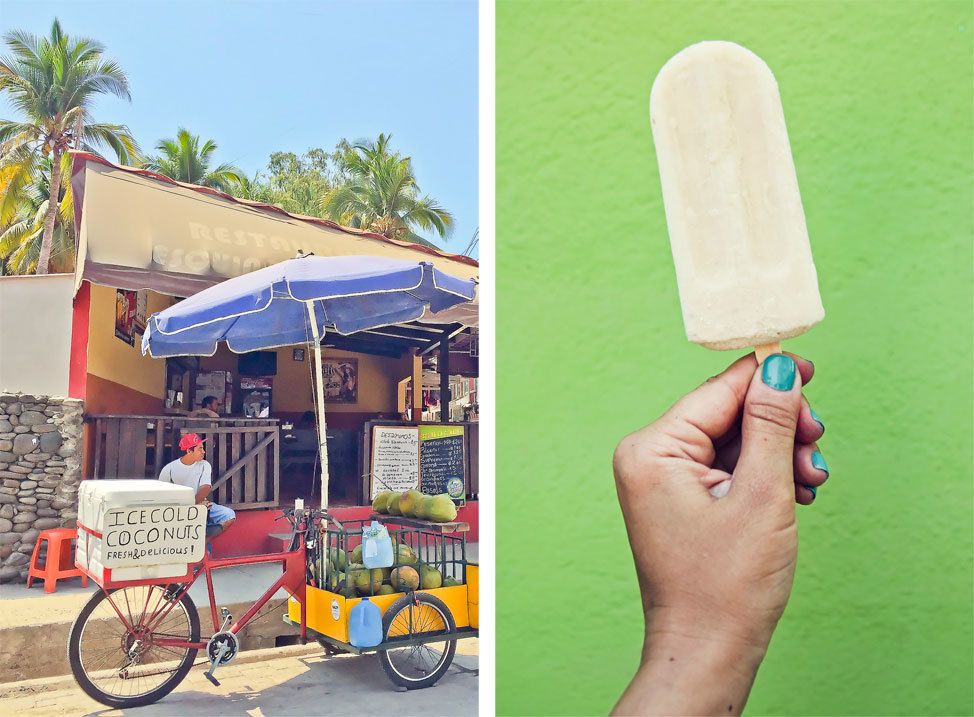 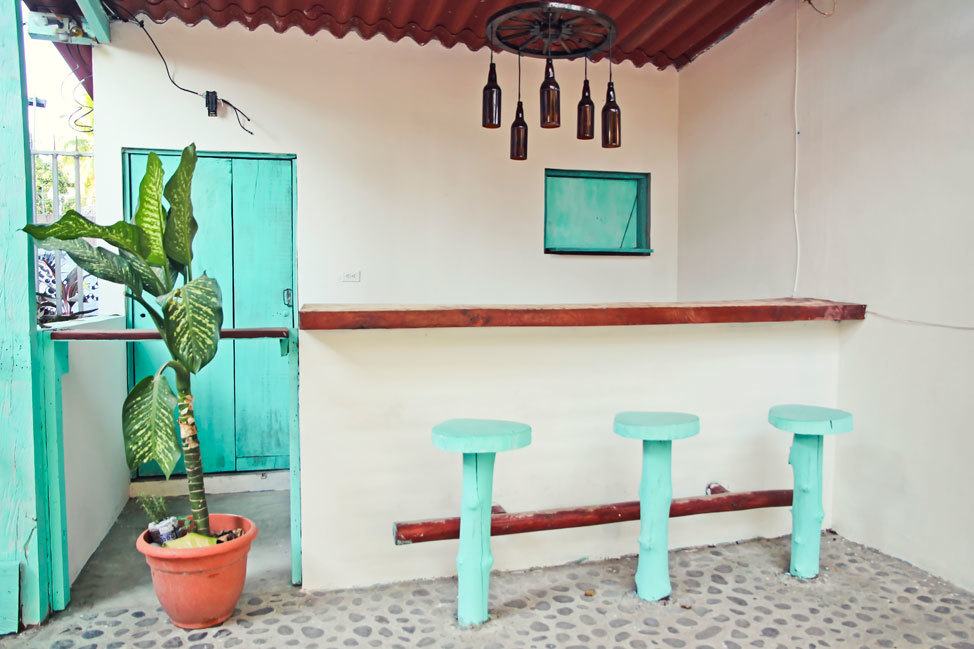 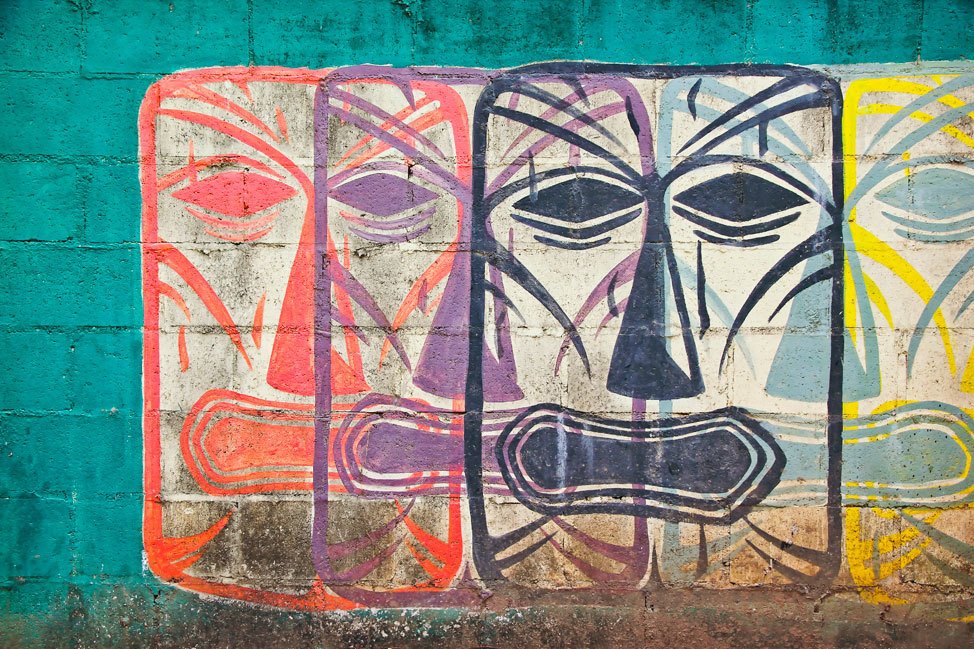 Upon arrival in El Tunco I checked myself into the charming Papaya Lodge, which I’d spend much more time than I anticipated in over the next four days. Why? Because I arrived in El Tunco feeling a little funny, a minor discomfort that quickly escalated into a crippling case of food poisoning, the worst I’ve ever experienced.

By nightfall I was miserable and dreaded the idea of taking a taxi to San Salvador to check myself into a hospital, as the guesthouse staff and several others encouraged me to do when they came to my room concerned after hearing my involuntary cries of pain. Without so much as a pharmacy in town Tunco isn’t an ideal place to get sick, and when two days later my muscles started to cramp and tighten from dehydration and I’d gone forty-eight hours without keeping so much as water down I finally agreed to go to the capital in the morning. After two weeks of being surrounded by my closest friends, I felt starkly alone. But my luck was about to turn, and I woke up finally on a gentle upswing. 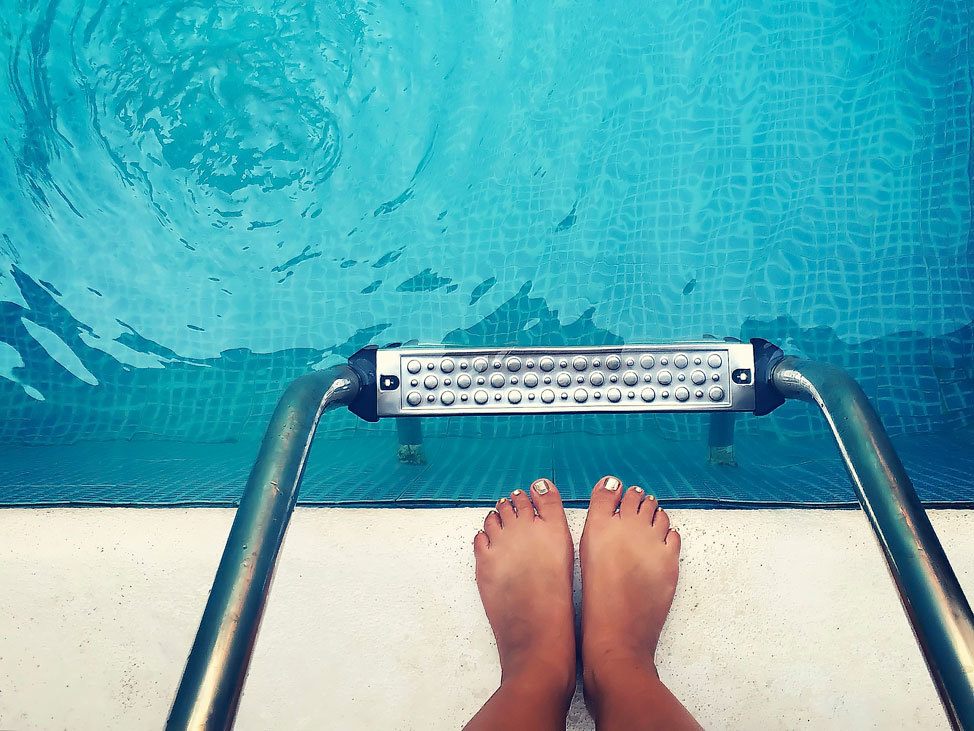 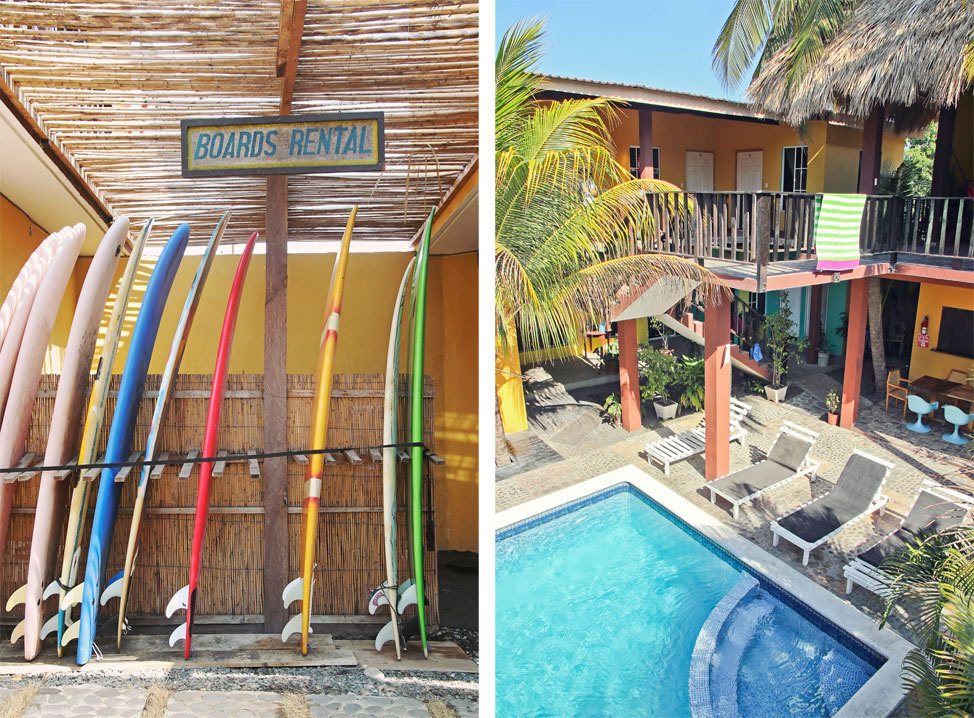 All that is to say that I didn’t really have the El Tunco experience I’d imagined. I didn’t rent a surfboard, didn’t go dancing, didn’t check out the local caves. Instead, once I was in recovery, I went for slow walks around town trying to soak up some Vitamin D and find electrolytes in the form of the rare bottle of Gatorade, went for a dunk in the ocean to try to cleanse away the terrible memories of the past two days, and eventually made my way to one gentle yoga class to try to stretch my aching muscles.

I wished I’d been able to squeeze in more classes. The town’s one studio, Balancé, is gorgeous and a must-visit for asana addicts. 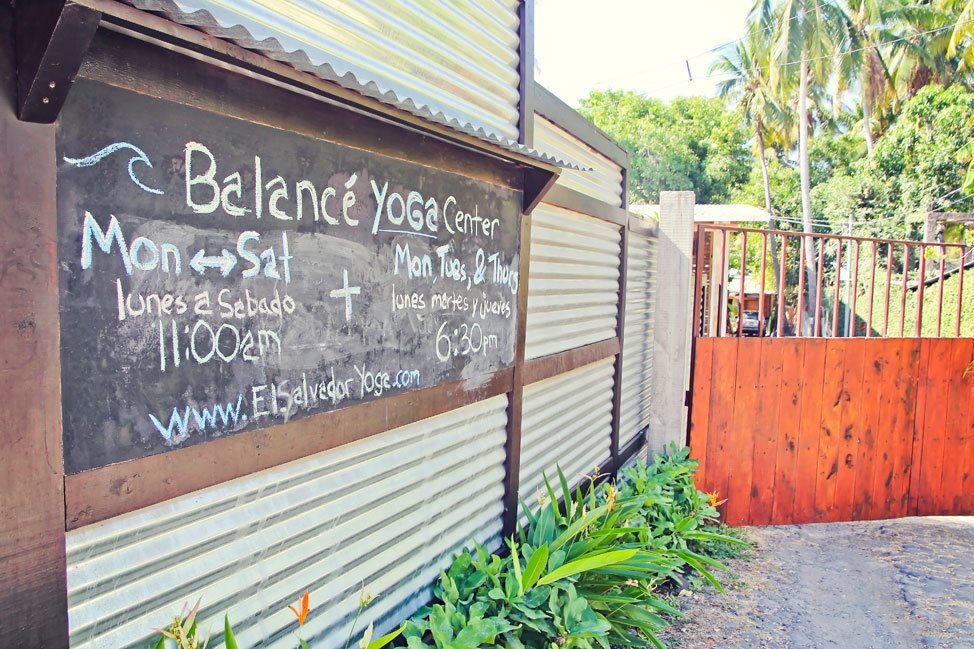 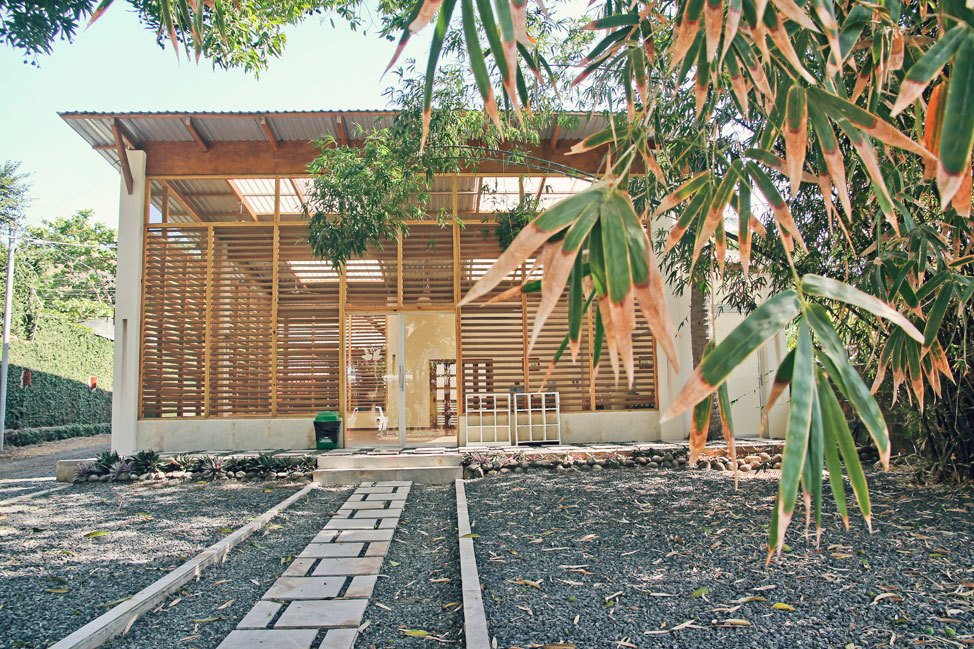 Though I regret that I was unable to get out on a board, I love the atmosphere of surf obsessed towns, and this one was no exception. 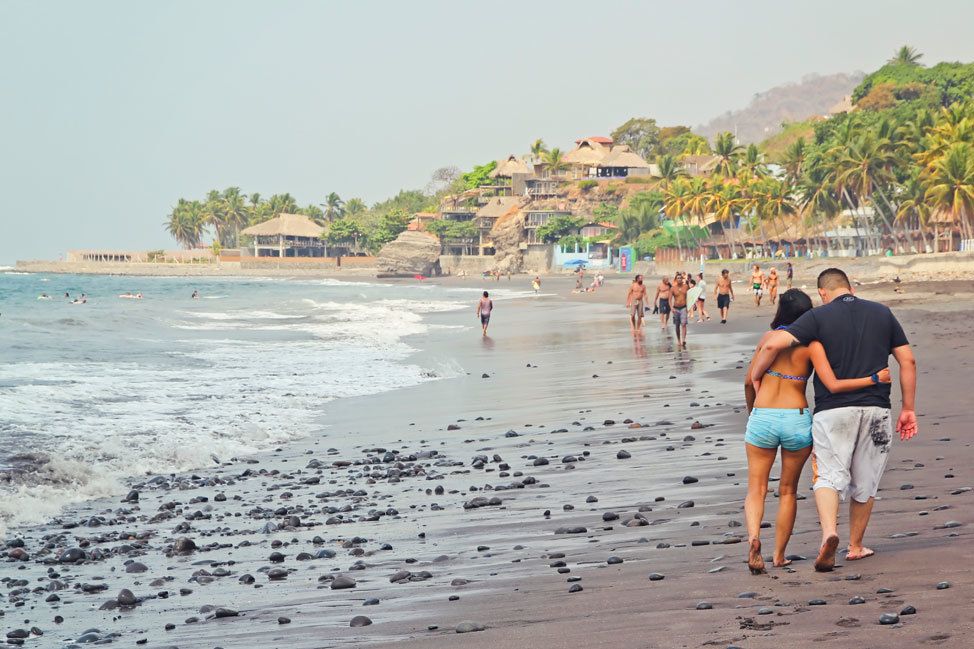 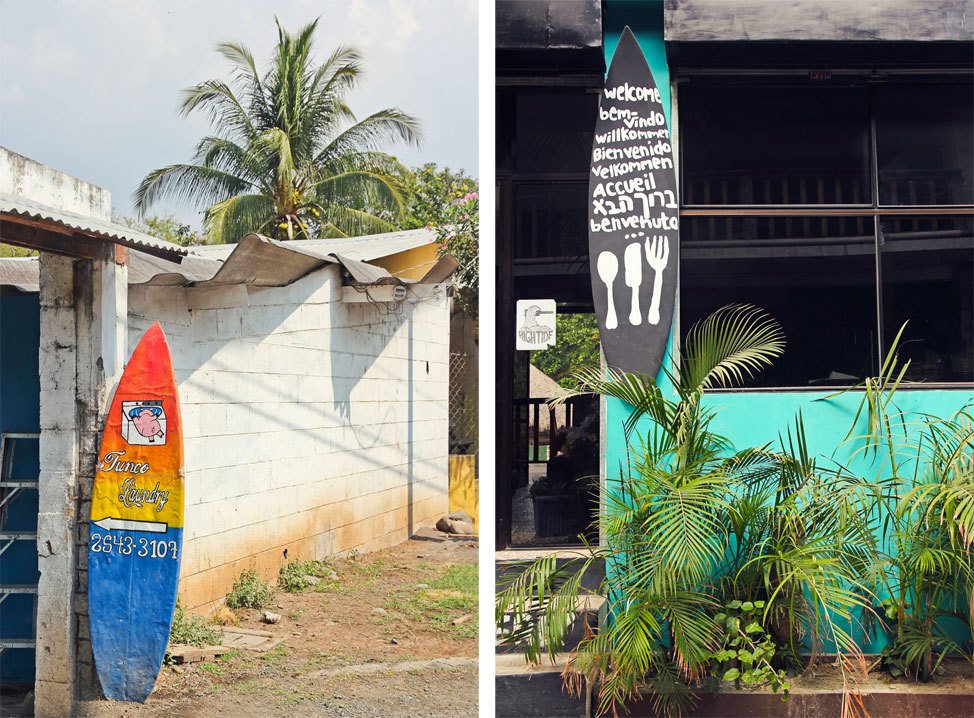 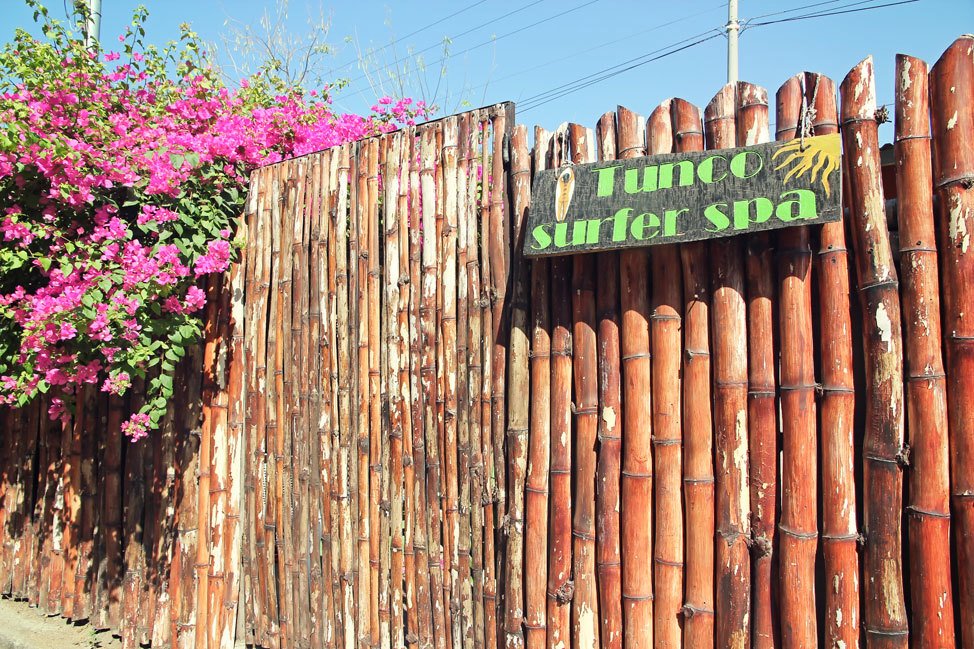 When I was finally able to eat again, there’s nowhere I would have rather been than El Tunco. From cheap roadside pupuserías to hip international eateries, Tunco had it all. Some of my favorites were Take a Wok, which had fresh and healthy stir fries, Soya, which had nice salads and other organic goodies, and the homemade popsicles sold out of several of the convenience stores around town. 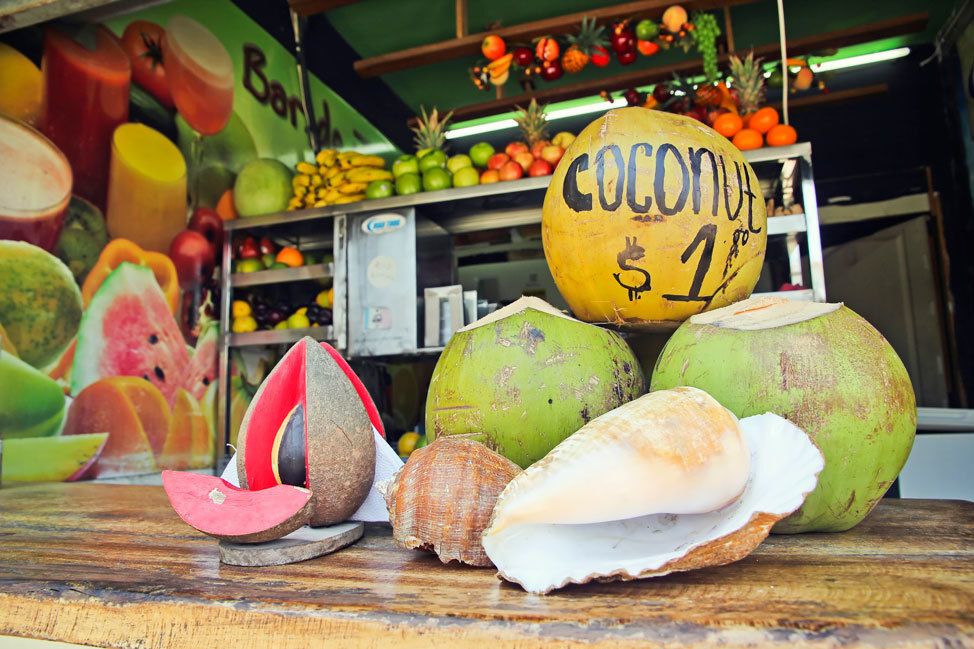 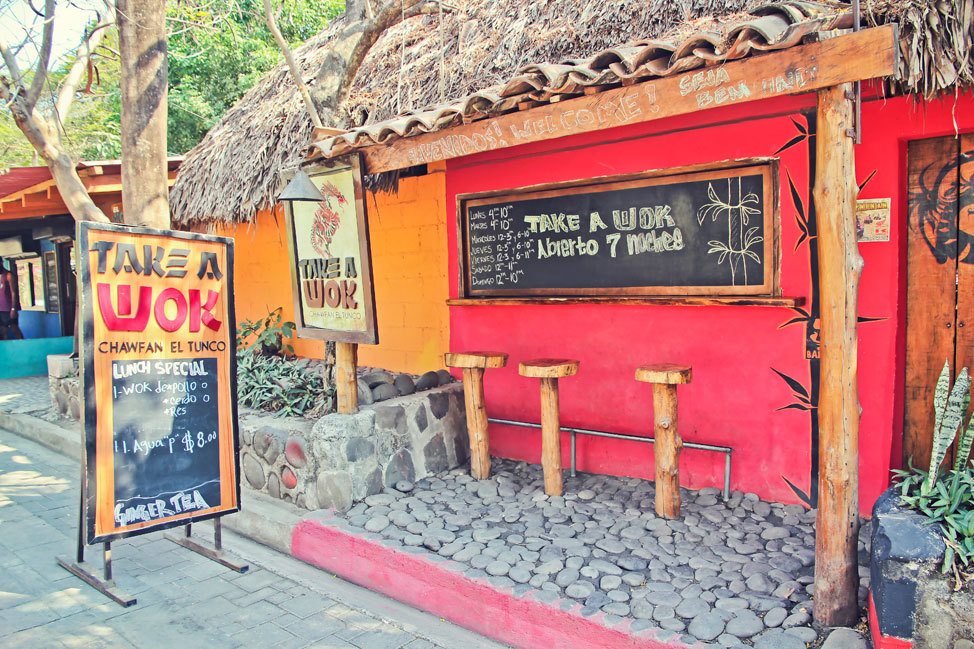 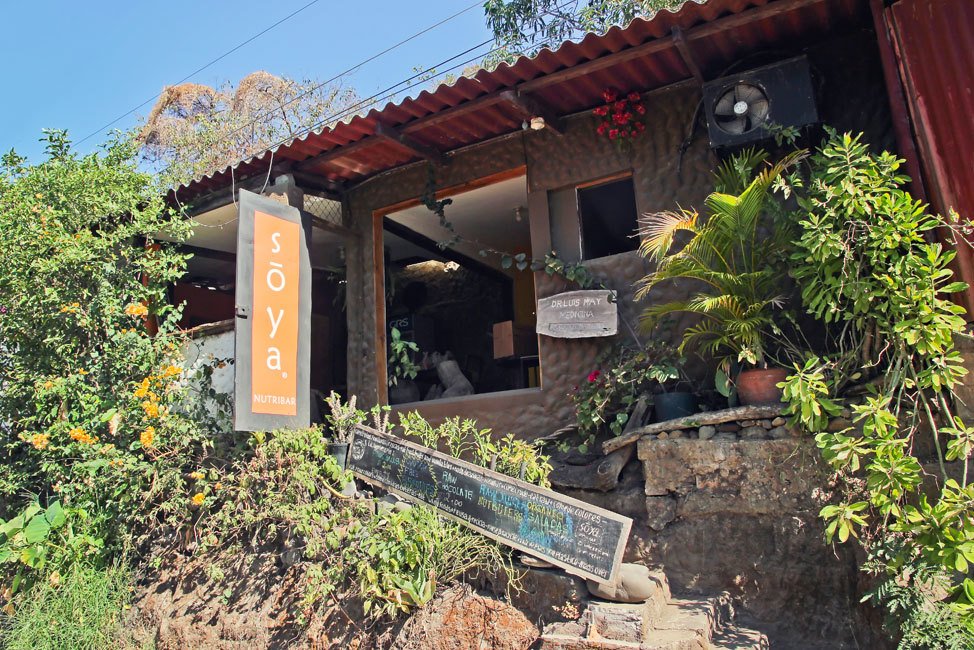 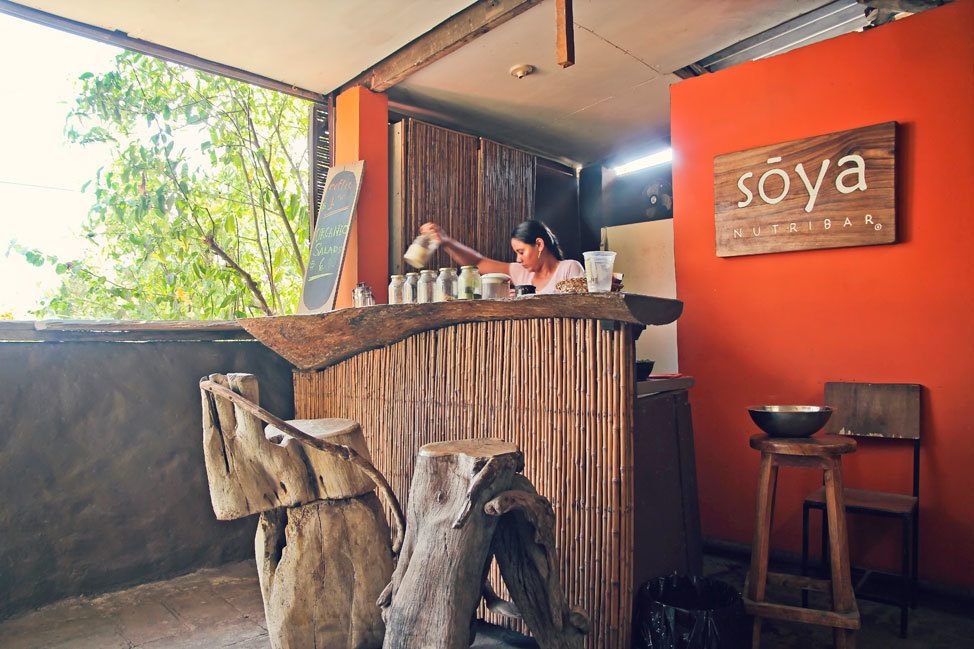 Despite my very bad fortune when it came to matters of the gut in El Tunco, it still managed to win me over where it mattered — my heart. What a sweet, colorful little piece of sandy paradise! For such a small place, there were so many surprises to uncover. 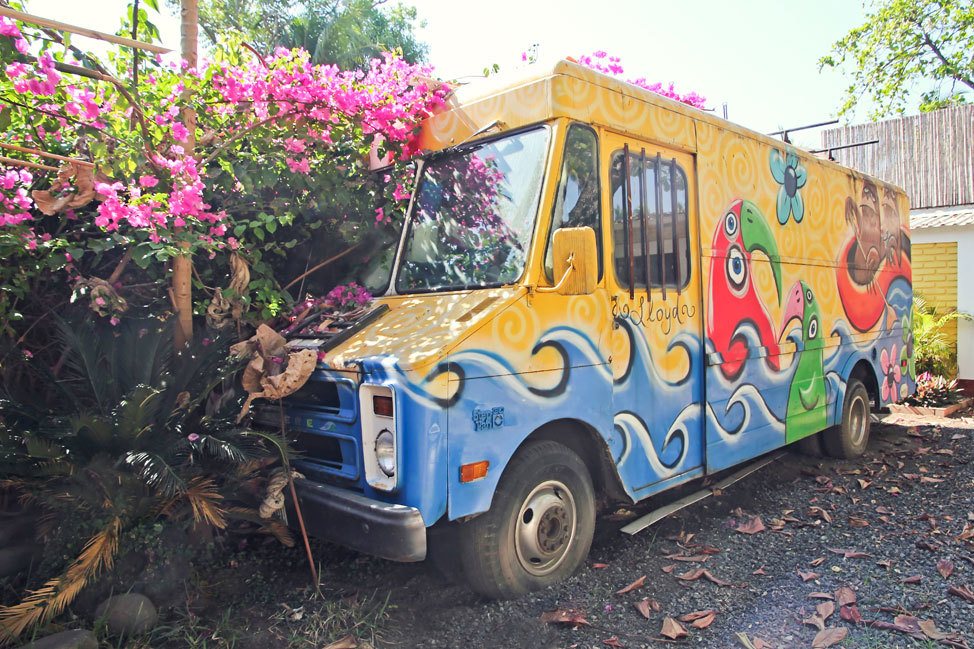 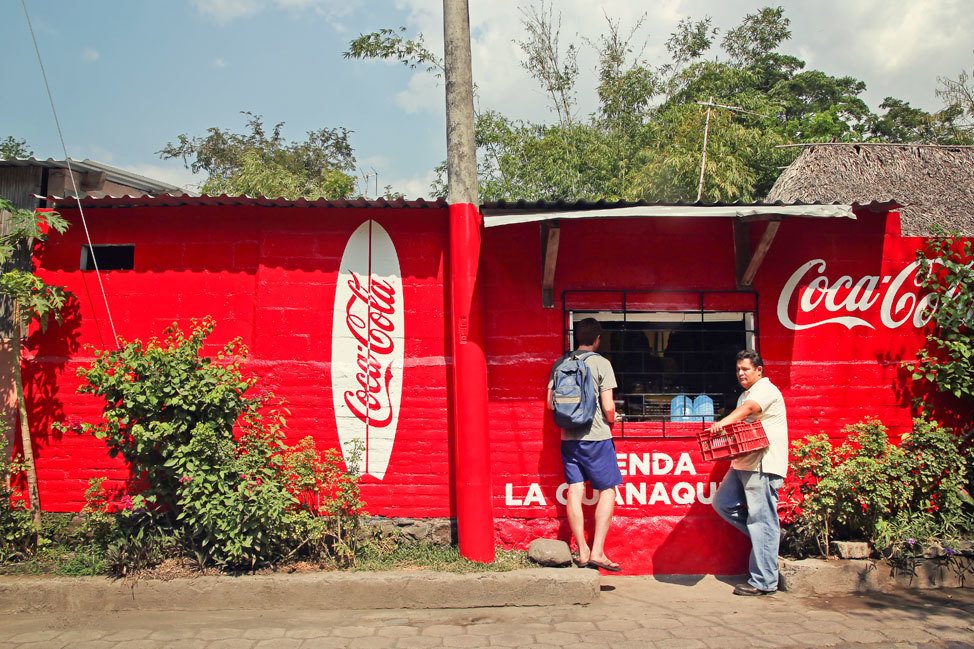 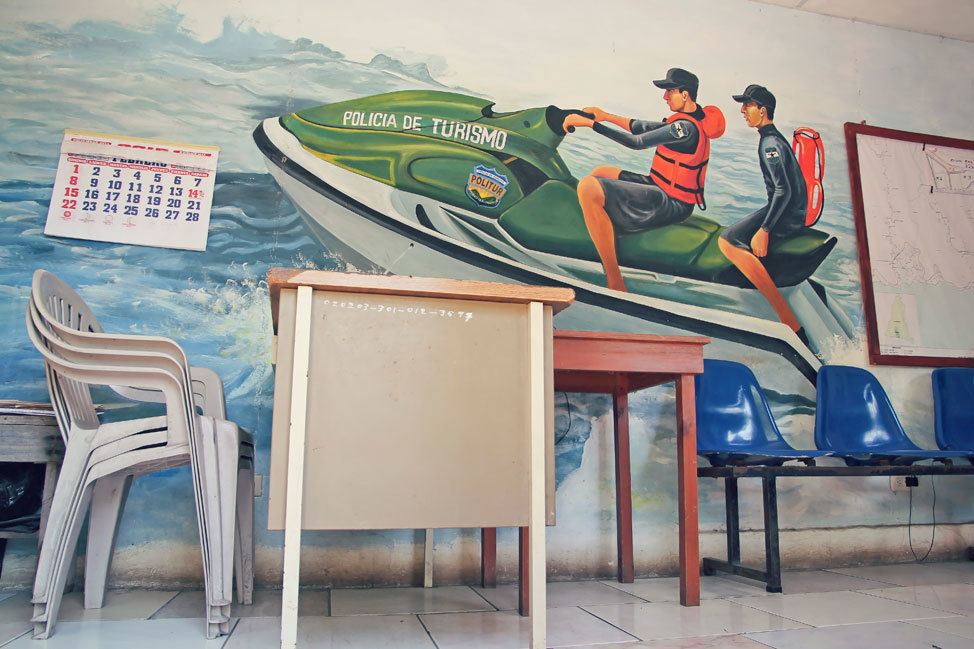 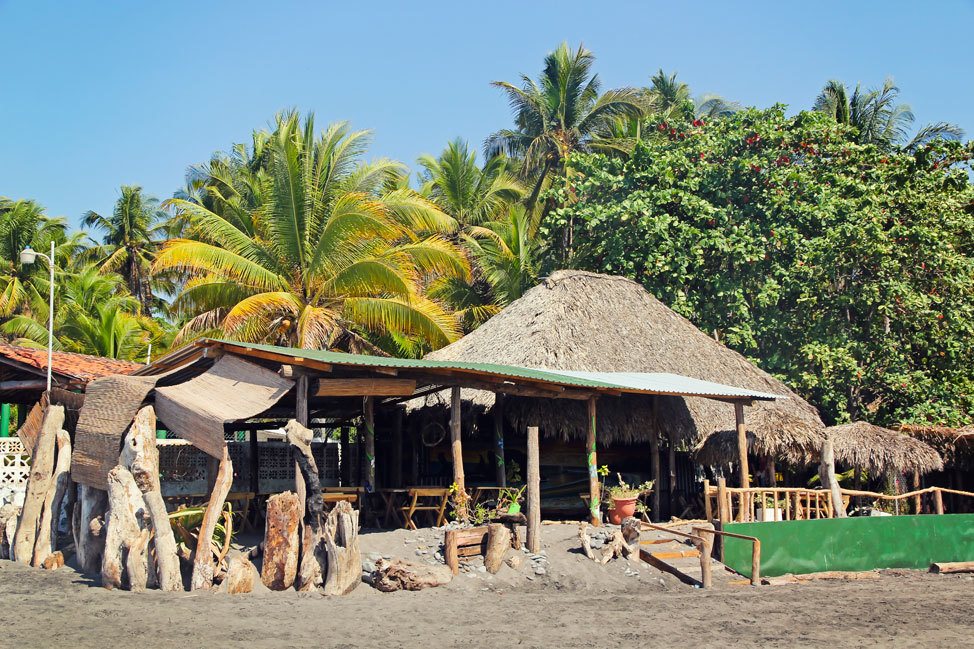 I loved that El Cuco and El Tunco complemented each other so perfectly. While similar, El Cuco was a peaceful and remote retreat, and El Tunco was a fun and lively town (for more on the nightlife and whatnot that I didn’t experience, check out Adventurous Kate’s El Tunco post).

Best of all, they both make perfect stopovers between Nicaragua and Guatemala. I was surprised to find how many travelers in Central America gunned directly from León, Nicaragua to Antigua, Guatemala via a popular seventeen hour shuttle service. I don’t know about you guys, but that’s about twelve hours past my bus comfort zone. Why not pop by one of these beautiful beaches for a few days, and get to know a little bit of El Salvador along the way?

I don’t think you’ll regret it. My two weeks beach hopping in El Salvador were an unexpected highlight of my time in Central America. Just perhaps plan ahead and BYOE — Bring Your Own Electrolytes, just in case. 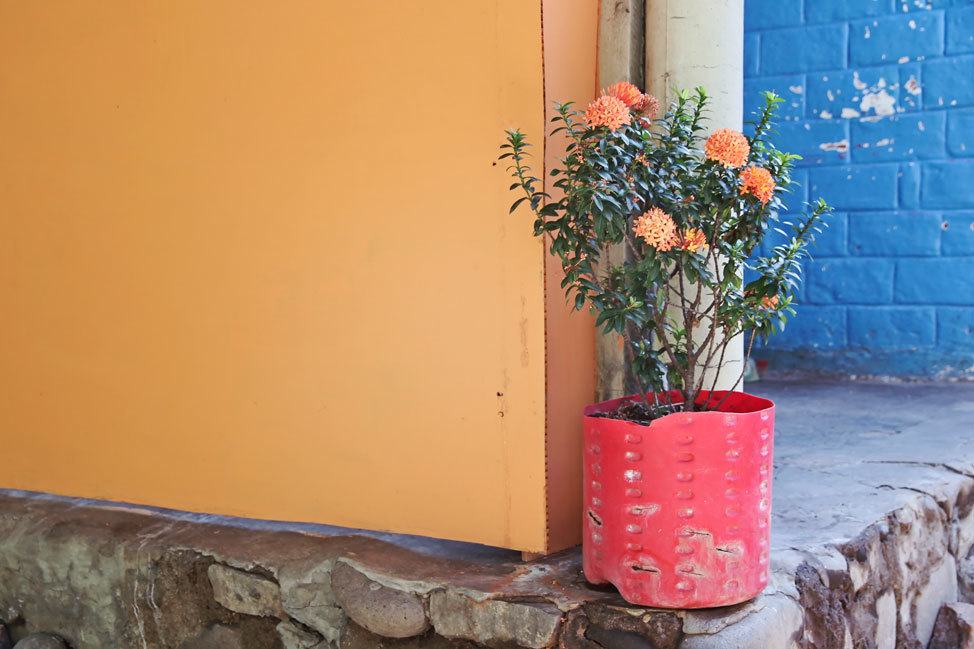 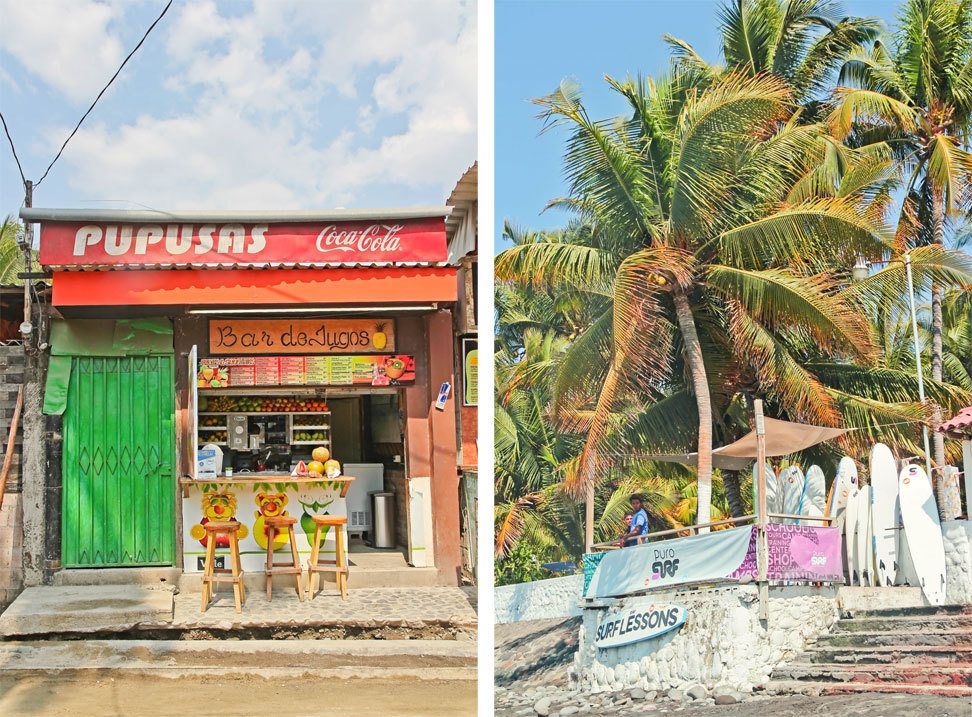 Equilibrio Festival • El Salvador: Under the Stars The Thing About Guatemala
56 Comments...