Long time readers know that the Vegas itch hits about once a year — this past August, just two weeks after returning from Aruba, Sin City called again. 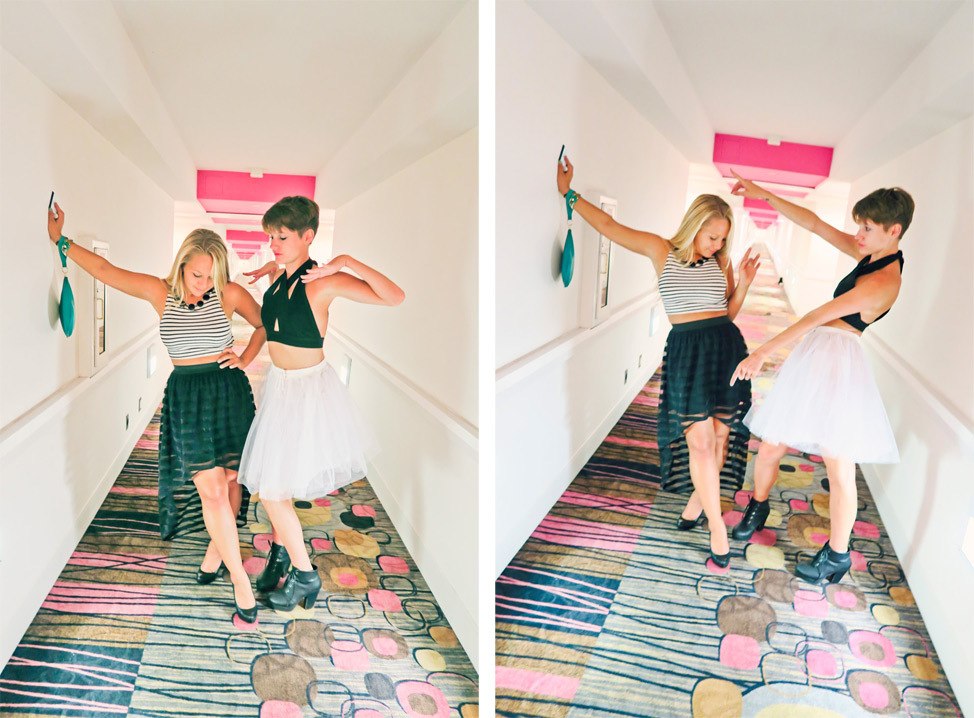 Around a year ago, my girl Zoe and our sisters and I were all in New Orleans having a blast, and started dreaming up what our next trip might be. With a shared passion for the Princess of Pop, a pilgrimage to her big show was almost a no-brainer. But with five schedules to juggle — including Britney’s, of course — our options were quickly narrowed down to just one date, a random Wednesday in August. (Tragically, Olivia ended up having to pull out due to work — but I’m not kidding when I say I might go again with her at some point.) And from that random Wednesday, a massive trip out West mushroomed.

I’d already decided long ago to head back to Burning Man again, and so I had some time to kill between Britney and Black Rock City. When JUCY campers asked if I wanted to test out their rides, it seemed like a sign that everything was coming together. Soon, six weeks were blocked off: a week in Las Vegas, a five day road trip around the Grand Canyon and Lake Powell, two weeks for Burning Man and the associated wind up/cool down in Reno, all capped off by two weeks recovering at my Dad’s on the California Coast.

I tell you, my travel plans have a funny way of taking shape. And it all started here, at Flamingo Las Vegas. 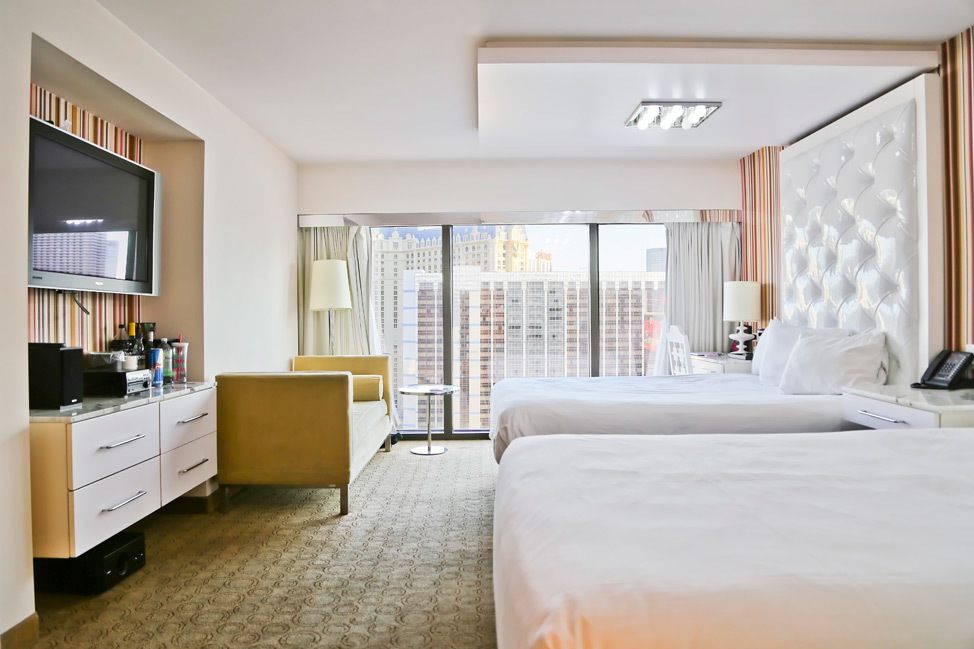 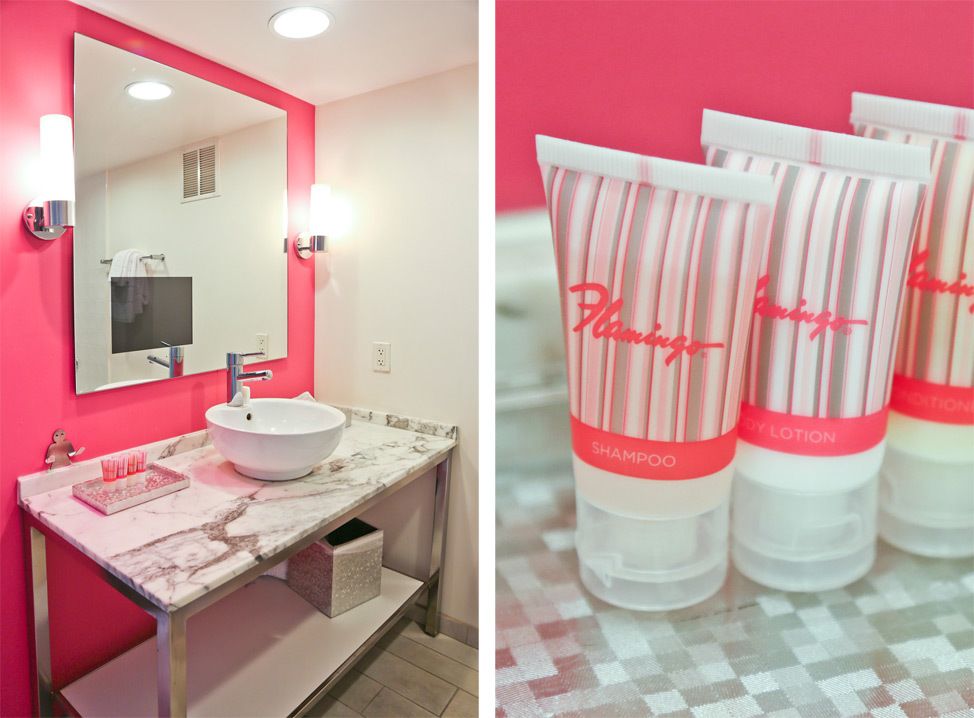 As soon as I knew we were Vegas-bound, I started my usual accommodation booking attack. I’m somewhat of a snob when it comes to Vegas hotels — it’s just one of those places were I think balling out is a must — and so I have to admit that when I found a fantastic deal for Flamingo, I kind of hesitated to take it. But when I showed Zoe the sale I’d scooped on Travelzoo — just $75 a night for freshly renovated GO rooms with a view of the High Roller — she convinced me we’d be certified crazy not to take it.

(In the end, Flamingo offered me a media comp for the same room, and we were able to take advantage of Travelzoo’s great cancellation policy to get a full refund. But still, Vegas is one of my favorite places in the world to nab a travel bargain!) 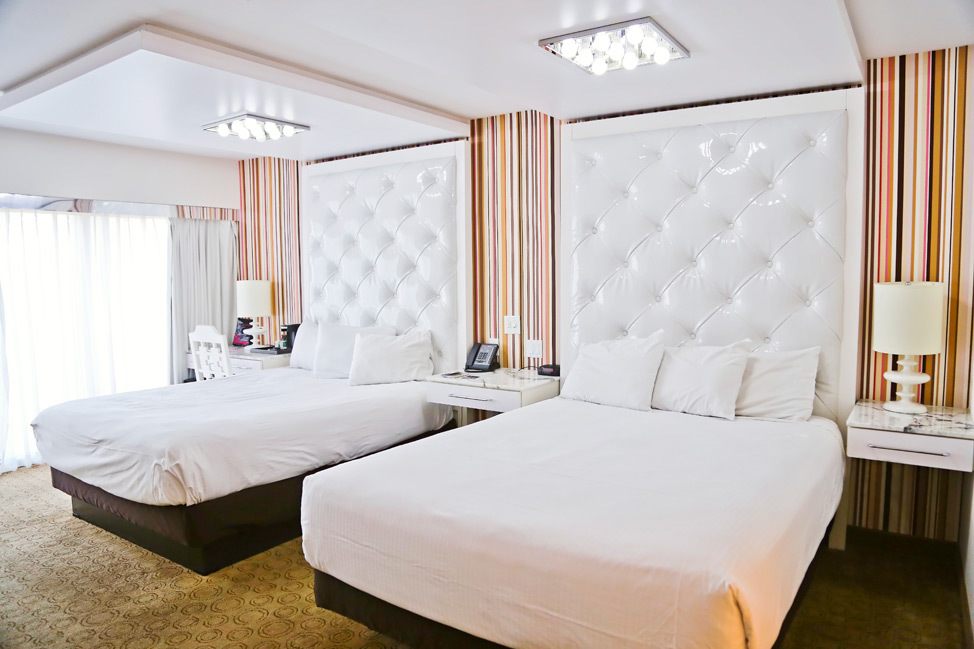 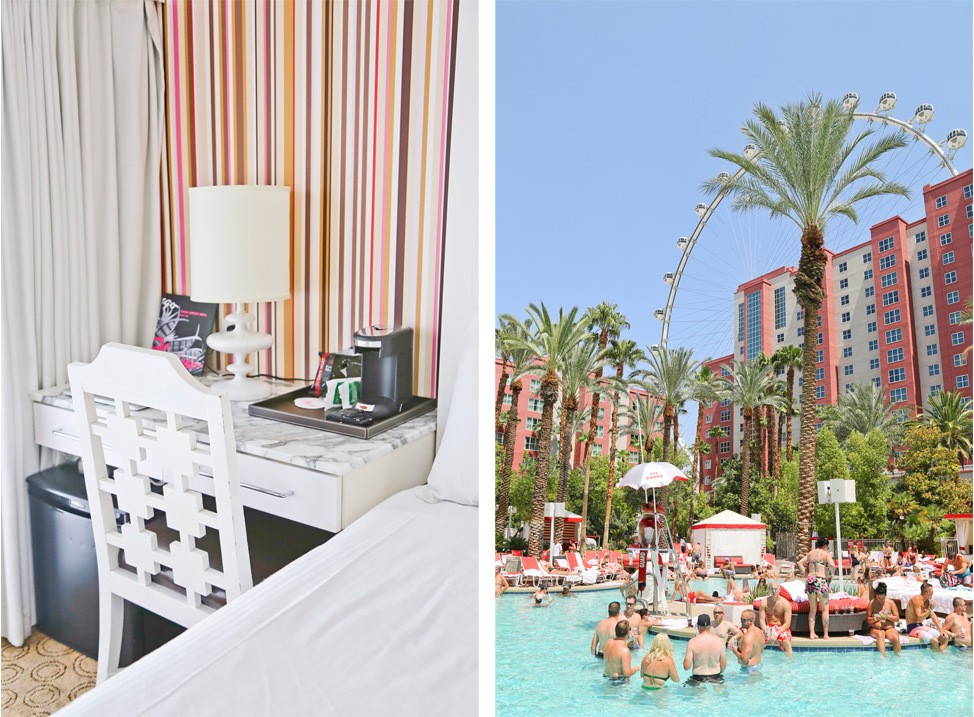 So first things first — my pretension was totally out of place when it came to the iconic Flamingo. No, it’s not quite as ritzy as The Aria, Cosmopolitan, or Vdara (favorites I’ve stayed in for previous stays on The Strip) but we couldn’t stop exclaiming what a great value our pink-splashed GO room was.

Plus, Flamingo is one of the most iconic spots on The Strip — you can’t compete with history. Notorious mobster Benjamin “Bugsy” Siegel opened Flamingo back in 1946, and it’s been a fixture on the scene every since. 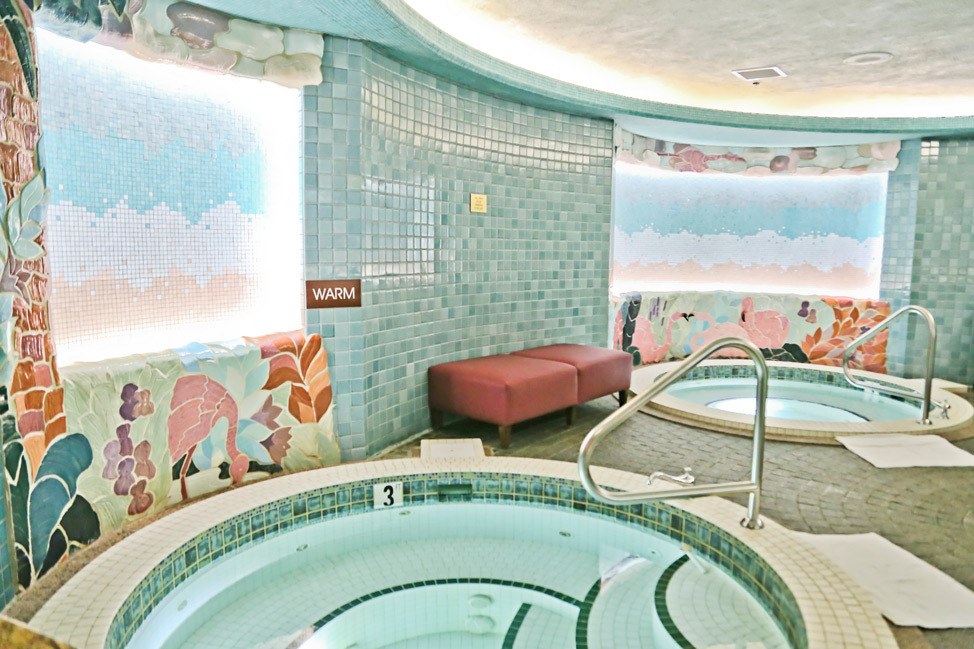 Perfectly pink flamingo details were everywhere — from the classic tiling in the resort’s low-key spa to the kitschy signage at the hopping adult-only pool. We actually found the adult pool a bit overwhelming on the day we dropped by (hangovers may have been a factor) and found solace in the breezy water slides of the all access pools instead. But possibly my favorite aspect of staying at Flamingo — and believe me, those vintage steel signs were stiff competition — was having direct access to The Linq. I first fell for this open-air (a serious rarity in air-con crazed Vegas) shopping, dining, and entertainment center a few Vegas visits ago, but I’ve never been so close to it.

Anyone who has spent time on The Strip knows that getting from Point A to Point B can be an ordeal, and so being right next to so many quick grab-n-go eateries, hip restaurants, and simply an area to stroll and window shop outdoors was a game changer. I started several mornings with a healthy smoothie at Squeeze, and ended several evenings with an indulgent cupcake at Sprinkles. A few more minutes in any direction brought more walkable fun: an oxygen bar in Caesars Palace provided respite on a morning of serious struggle, while the World of Coke store brought me immeasurable joy on an evening of all around silly fun. 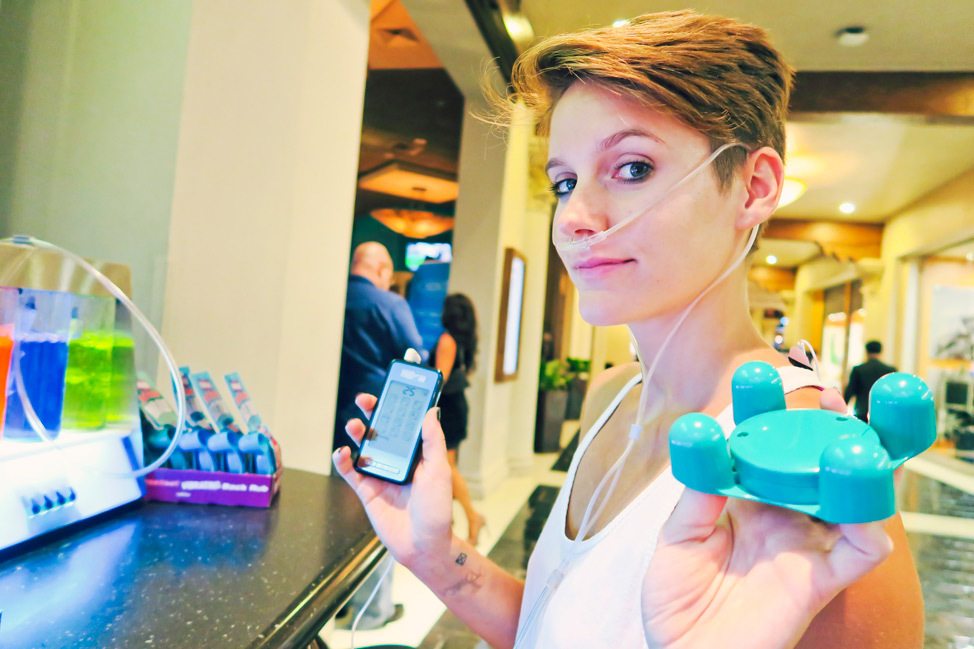 Personally I thought they could stand to expand the Diet Coke merchandise selection at World of Coke, but I did walk away with a new keychain and matching mouse pads for my other caffeine dependent family members and I. Love of all things flamingo-printed aside, Flamingo Las Vegas had some pretty serious work to do winning over this Strip snob. And man, did it go above and beyond. Great value, an unbeatable location, and the perfect balance of nostalgia, kitsch, and chic in the newly renovated GO wing — I wouldn’t hesitate to return to this Sin City staple. 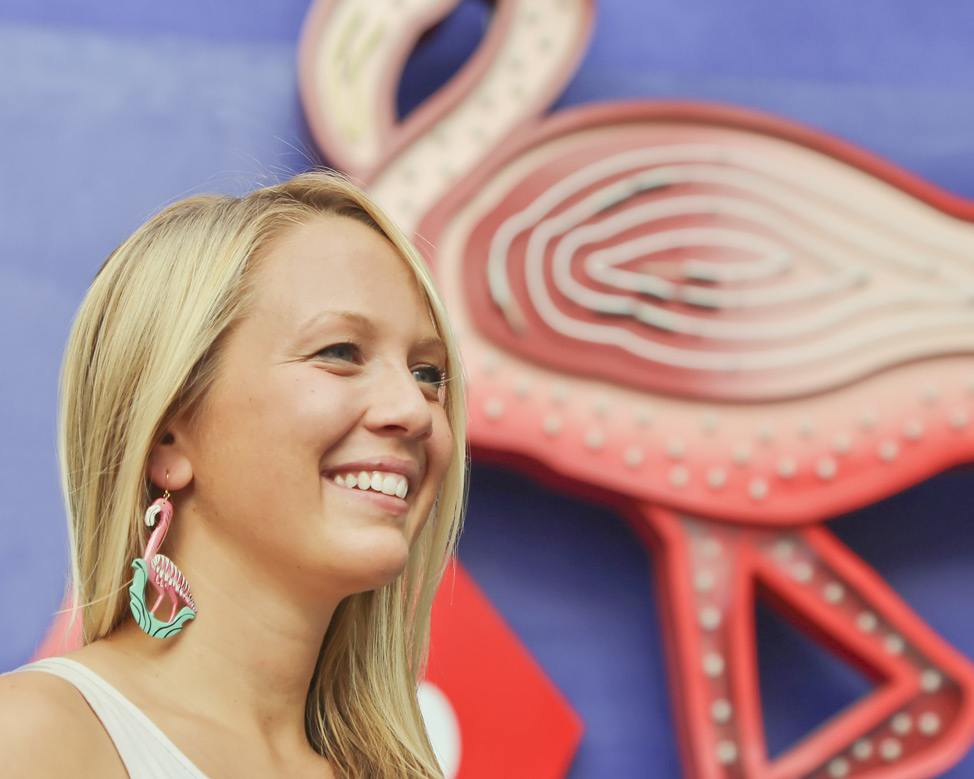 Stay tuned for posts on my big night with my girl Britney, my first journey to Freemont Street, and my adventures in Strip hotel hopping (I couldn’t stay still for the whole week, after all!)

Are you a Vegas addict like me? If so, what’s your favorite hotel to get your fix?

Many thanks to Flamingo for hosting me in Las Vegas. As always, you receive my honest thoughts, full opinions and poorly written jokes regardless of who is footing the bill.

Living It Up At The Cosmopolitan Part II

My Island from Above: A Spontaneous Martha’s Vineyard Biplane Adventure

Photo of the Week 241: Koh Phangan Underwater Wanderlust: Announcing my role as a PADI AmbassaDiver
37 Comments...