From Spin Class to Sugar Dens: Where to Stay, Eat and Play in Thonglor

Confused on where we are? I’m taking this moment while my travels are grounded to care for my mom to catch up on my black hole of un-blogged content. Here, I’m covering my time in Thailand in May of 2017. My apologies for any confusion with the timeline, and thanks for sticking with me.

How do you keep a destination you’ve been to dozens of times feeling fresh? When it comes to Thailand’s capital city, I don’t think I could ever get bored. That said, living in Thailand, I found myself in Bangkok several times a year, sometimes heading up for a big city fix, other times tacking on a few days here and there to break up lengthy travel to and from other continents. It was very easy to fall into a routine.

But Bangkok is a sprawling city made up of dozens of unique, distinct neighborhoods. The simple fix? Focus on a different one each trip. Before heading to Ayutthaya, we’d based ourselves in Silom and had a blast getting to know the slick area a bit better. Now, with a few days to burn before my flight back to the US for the summer, we decided to dive into the hipster stronghold of Thonglor. 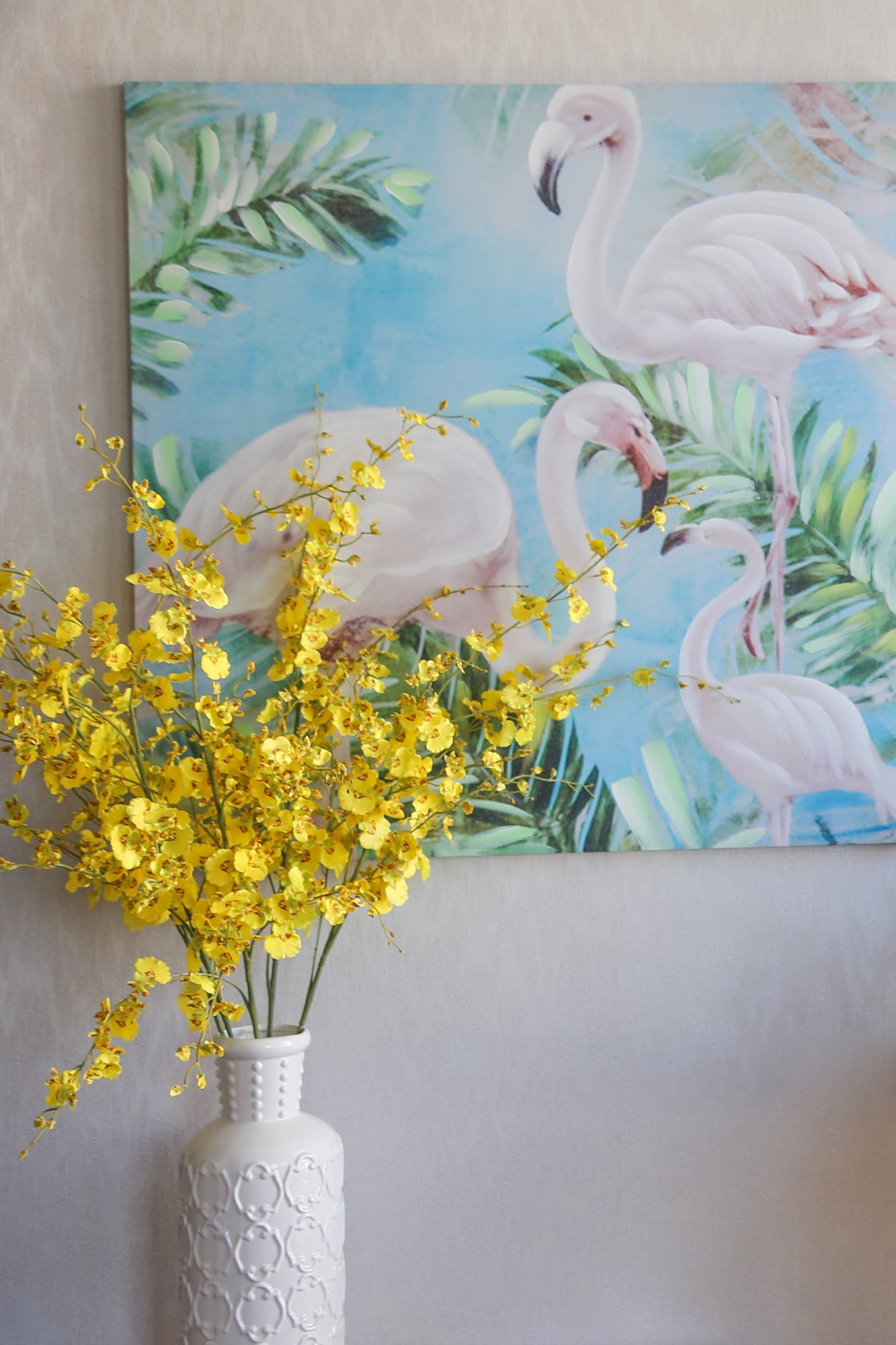 Thonglor has been a very hip place to eat, drink, and explore for a few years now. But it wasn’t until recently that it started becoming a popular place to actually stay — perhaps it was too far off the typical tourist sights, or perhaps it just takes accommodation providers a while to catch up. While today there are an array of hotels and hostels to choose from in Thonglor, there’s nowhere near the concentration you’d find in Sukhumvit, Silom, or Khao San.

Looking for places to bar-hop in Thonglor? Check out my previous posts about doing so here, here and here!

After eyeing up a few hotels that were just a little out of our comfortable price range, we settled on a small but stylish Airbnb right off soi 63, the main drag of Thonglor. For about $50USD a night, it was a steal. It was also super practical — after a week on the road, we were able to do our own laundry, and I got to board my flight to the US with clean travel clothes. Win! (Though I’m pretty sure my favorite little black dress blew off the balcony where I was air-drying our clothes. RIP.) We absolutely loved this Airbnb. Ian and I always fantasized about living in Bangkok someday — a dream he made a reality recently when he spent several months working at Michelin-starred Gaggan! — and this was a delicious taste of that reality. We binged Netflix and ordered FoodPanda (Thailand’s answer to Seamless), I’d wake up early and walk to a nearby workout class, and we’d spend ages waxing poetic about how nice it would be to sign a lease somewhere nearby.

The only downside? A two night stay never left us enough time to hit the pool.

Get $40 off your first Airbnb booking using this link! 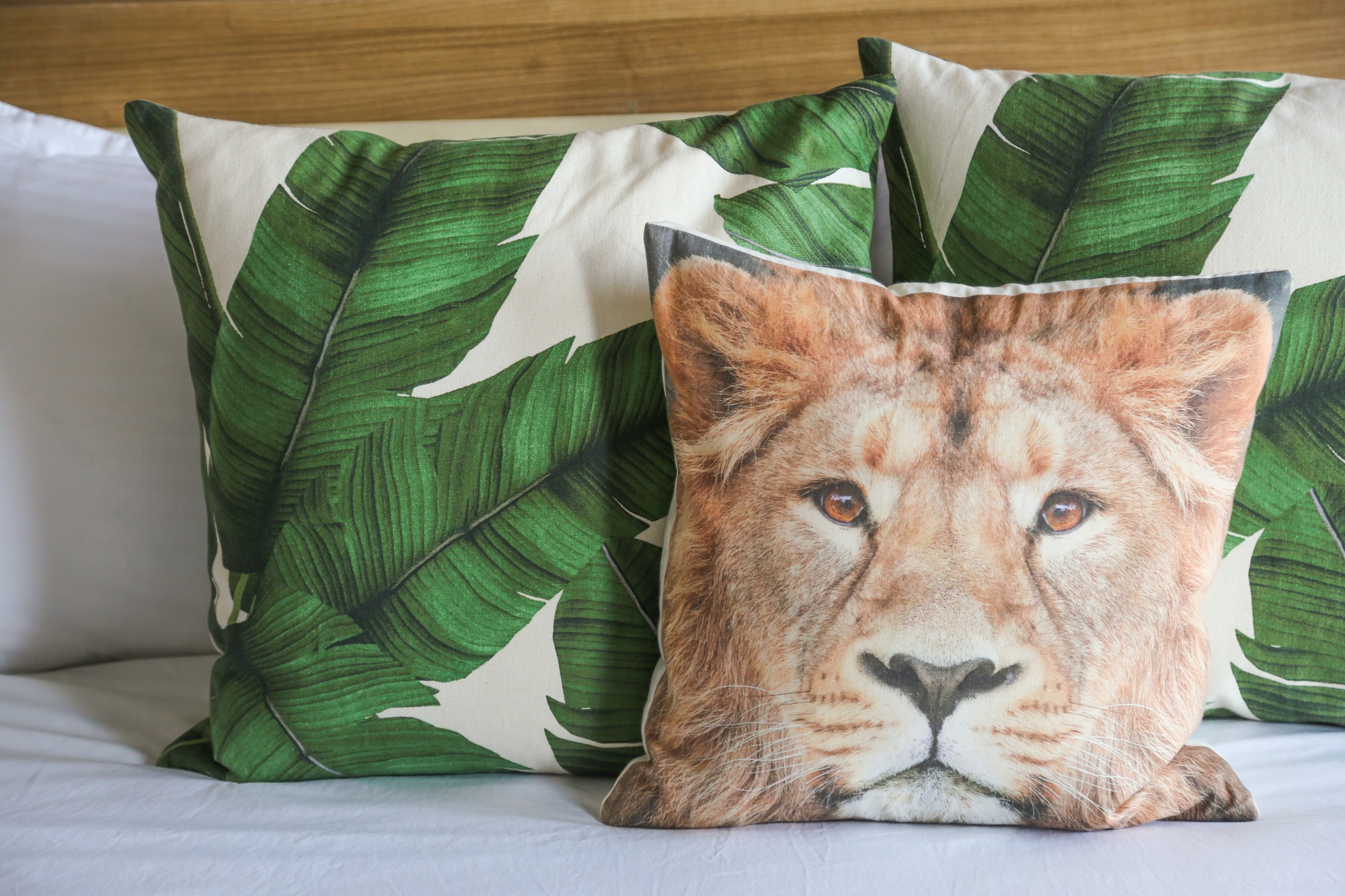 If you’ve been a Wanderland reader for a while, you’ve heard me wax plenty poetic about The Commons, Thonglor’s trendy new (at the time!) shopping and dining complex. The first floor is basically the world’s hippest food court, with pop-up versions of some of Bangkok’s best eateries serving their famous fare. Then there are two stories of carefully curated boutiques topped by a spin studio and a rooftop bar that offers weekend workshops on tea infusing and flower arranging! I’m not a mall kinda girl normally, but this little spot is everything I miss about city living wrapped up in one neat package.

On this trip, I loved that I was close enough to try the Absolute You spin class onsite. I’ve tried other Absolute You locations around the city and had really horrible experiences with the staff being condescending and deeply unwelcoming, which makes me loathe to say a good word about them, but I can’t deny I had a great time here — it was a high energy, good workout class, and exciting to see Bangkok take on the spin trend. Rather than hunker down for a post-sweat brunch at The Commons, we decided to try something new and check out Brekkie. My endless Google alerts for “best acai bowl in Bangkok” really payed off! With fresh pressed juices, organic superfood ingredients and Australian inspired dishes, Brekkie is an incredibly healthy option for a meal. 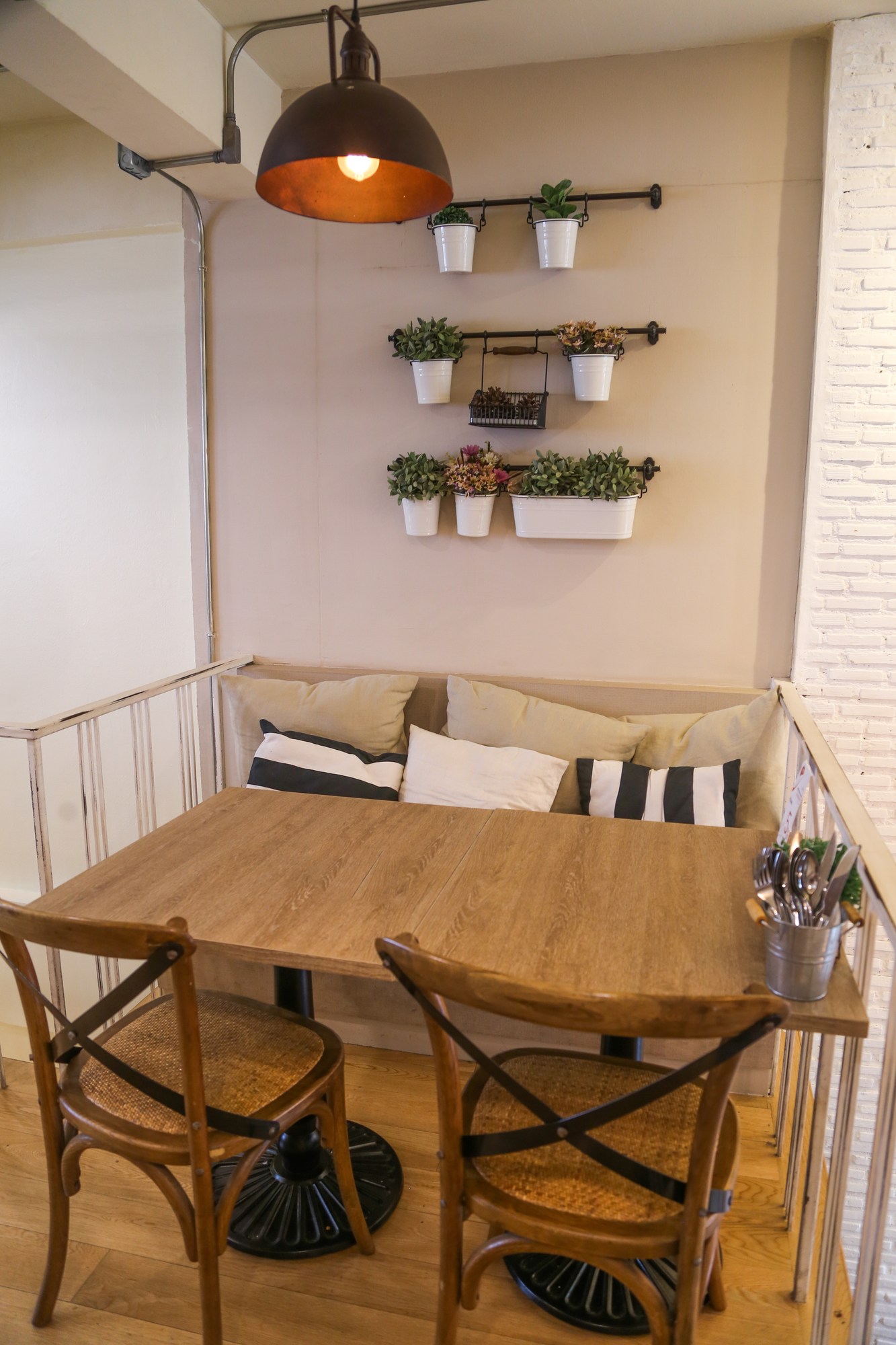 Next stop? The Hive, Thonglor’s premier co-working community, where in my alternate fantasy living-in-Bangkok-reality, I have a monthly membership and spend my days working away in productive bliss.

The square that The Hive sits in has so much fun stuff going on that I’m eager to explore — a paint bar, a blowdry bar, tons of cafés and bars. It’s basically like they built me a personalized playground! 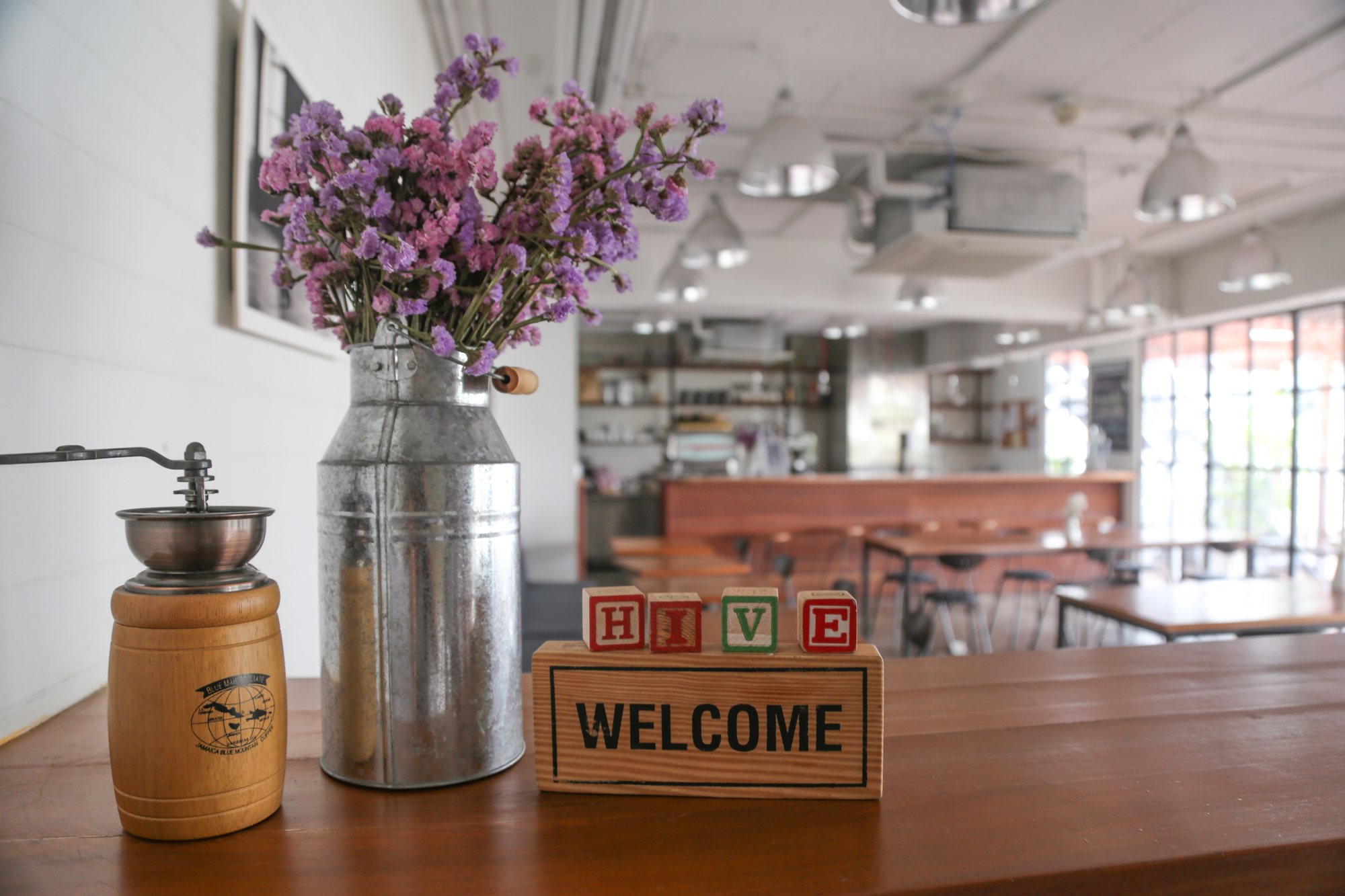 What really makes this place my personal version of heaven is the onsite The Hive Spa. What, your coworking space doesn’t have an onsite massage room where you can acquire punchcards with ten hours of pre-paid kneading? In my opinion, everywhere else is doing it wrong. 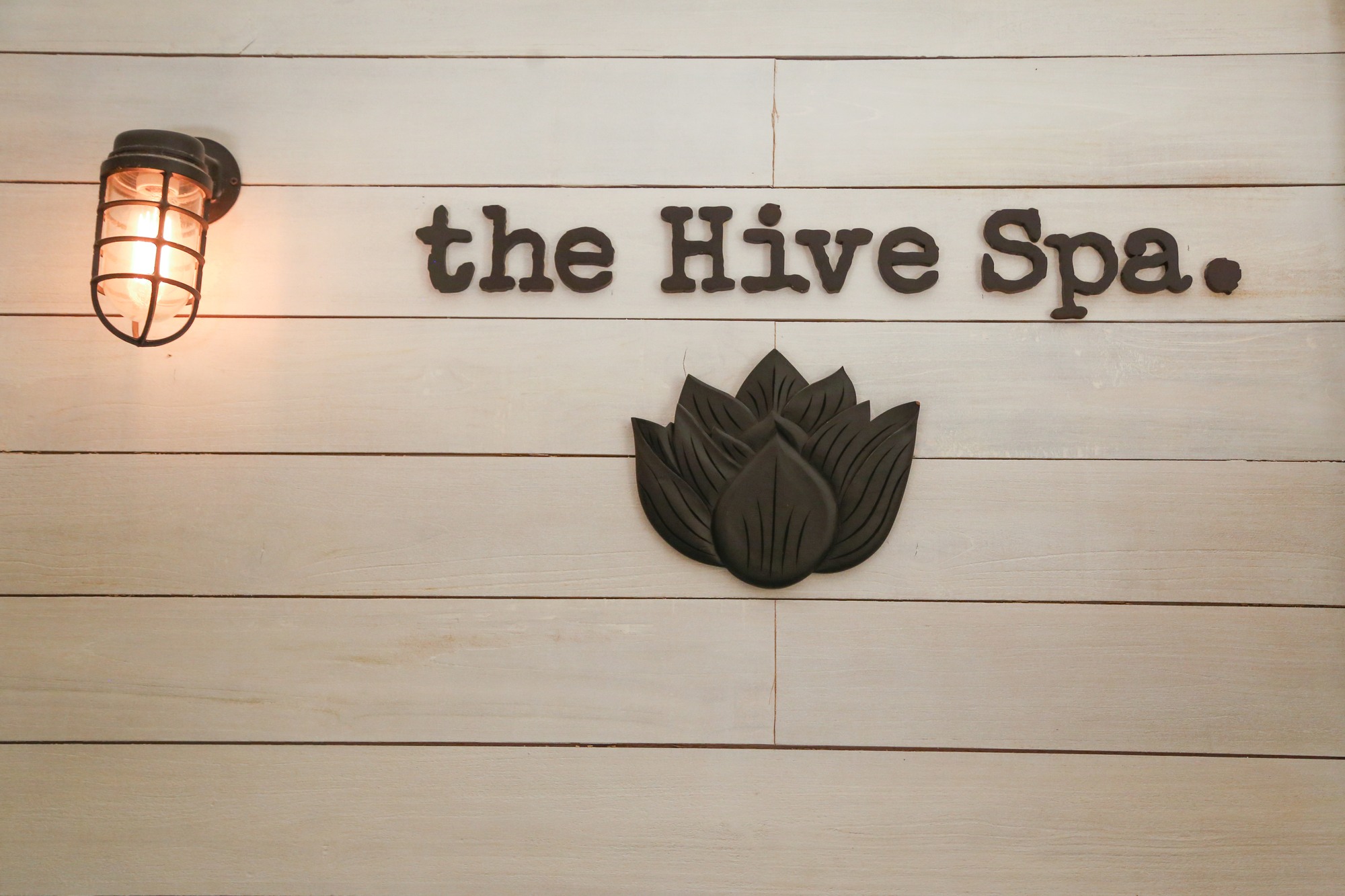 Our final stop in Thonglor was a place that has blown right up on Instagram. However, believe it or not, I had another interest in Shugaa, Bangkok’s hottest dessert bar: the sugar. Their plated desserts and mini fondant cakes are like tiny works of art — and I don’t say that lightly. The creativity is out of this world! And it’s not just for show — the recipes are equally innovative. Take the Kyotonite, made up of matcha, azuki bean, green tea, red bean paste, matcha glaze, caramelised almond, and green tea mochi; or the CrumpB’, created from creme anglaise, apple caramelize, vanilla, cinnamon, crumber, earl grey, and Tahiti creme. Dang!

That sense of style is mirrored in the cafe itself, the design of which is inspired by the molecules and crystals that make up the cafe’s namesake. However, I have to admit that as dazzled as Ian and I were by the setting and the beautiful treats on our plates, we were kind of turned off by the other patrons. Clearly, I’m not a camera shamer. It’s literally my job to create content that often involves taking photos of myself, my food, and the places I visit. But I do try to do it quickly and discreetly and get back to actually, ya know, experiencing the experience. 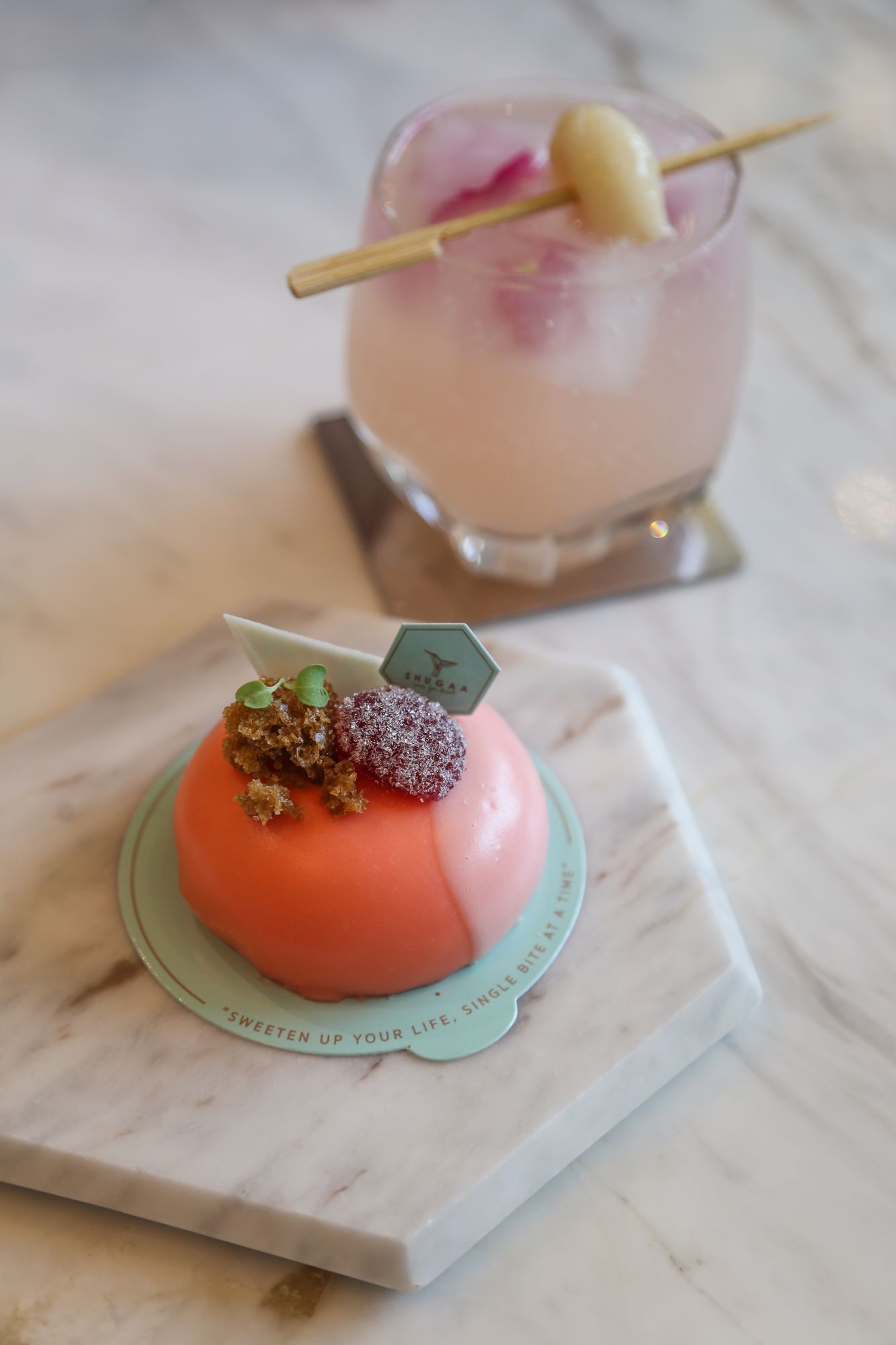 The other people in Shugaa while we were there did not share the same values, ha! I’m not exaggerating when I say some of the photoshoots that took place were raging from the time we walked through the door to the time we paid our bill. How did they resist not digging in for that long?! There was one couple that seemed to take a hundred photos from every single step on the stair case, and another still where a dude was on the second floor of the cafe shooting “candid” shots of his partner pretending to gaze lovingly at a small cake. I admit a small part of me kind of admired how brazen it was.

We’d definitely gotten a taste of this particular crowd’s affinity for photoshoots at Wonderfruit, but it felt pretty intense here, where it seemed like we were possibly the only people at the entire cafe there to, ya know… eat food. Ian was super turned off, and Ian basically never gets rattled by anything.

Anyway, if I did come back, I’d head to the second floor for the DIY workshops I found out about later. I’m not sure if they’re offered in English or not, but if so, I’d love to learn from the brilliant minds behind this place. I’m obsessed with all things Thonglor, and this short stop there only intensified my desire to spend more time there someday. I hope if you’re headed to Bangkok, this post gives you a few ideas of places to add to your radar.

That’s all, folks! This wraps up the coverage of my travels in Southeast Asia in early 2017.

The Best of Bangkok: A Viator Tour of the City’s Highlights