On the Heels of History: Hiking the Inca Trail Part I

The Inca Trail. If I was able to peek into the mental bucket lists of travelers around the world, I think it’s safe to say that this world-renown trek would merit a high ranking spot on most of them. Four days hiking through brutal altitude and stunning panoramas towards an unmatched final destination: the ancient Incan city of Machu Picchu.

Of course, it ain’t no hidden gem. Access to this route is strictly controlled — only 500 permits per day are issued (including guides and porters) and only authorized companies can receive permits. Zoe and I paid upwards of $600USD for our trek with Llama Path and booked nearly four months ahead — in the middle of shoulder season. The Inca Trail is among the most expensive and it undoubtedly the most exclusive hiking route to Machu Picchu; other options like the Salkantay or the Lares treks allow travelers to book mere days in advance and pay a fraction of the price. But we were fixated on the classic Inca Trail, 27 miles of Inca-laid trails connecting hauntingly beautiful archaeological sites, breathtaking views, and heart-pounding mountain peaks. 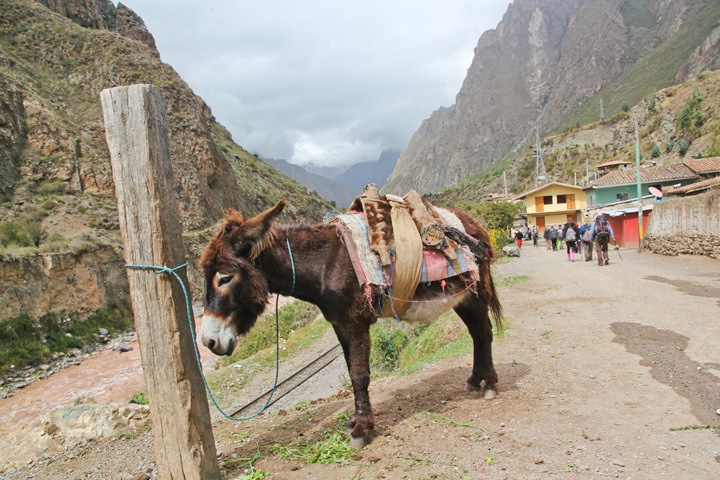 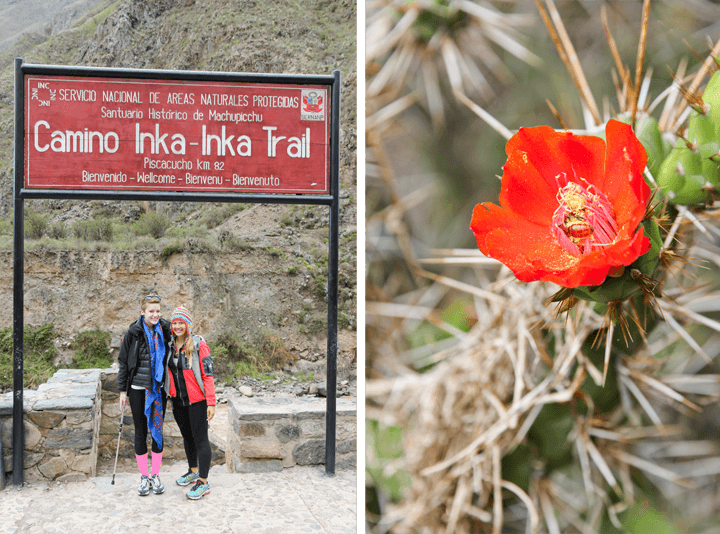 I was both excited and nervous for this literal and figurative pinnacle of my trip to Peru. On one hand, I was concerned about my stamina and our decision to hike at the start of the rainy season. On the other, how could I not love it — it’s the Inca Trail!

We arrived in Cusco two days ahead of our departure in order to acclimatize, attend a pre-trek meeting, gather supplies, and otherwise prepare. On departure day, we walked through the twinkling lights of pre-dawn Cusco to meet our group at 4:30am for the bus ride to Km. 82 in Ollantaytambo, where we’d start hiking. We were quite the little army — fifteen trekkers, three guides, a chef, and twenty-two porters carrying everything from sleeping bags to kitchen equipment to tins of hot chocolate Milo for tempting us out of our tents each morning with.

After passing through a control station where our passports were checked against our permits, we received fresh stamps in our passports — a little bonus I was inexplicably thrilled by — and we were off. 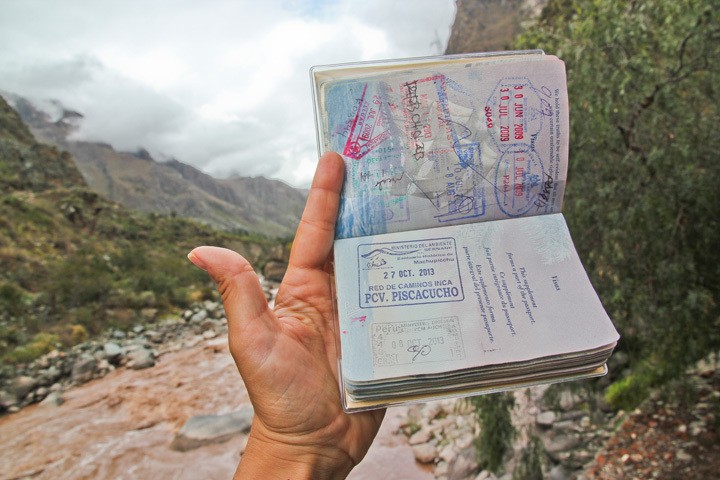 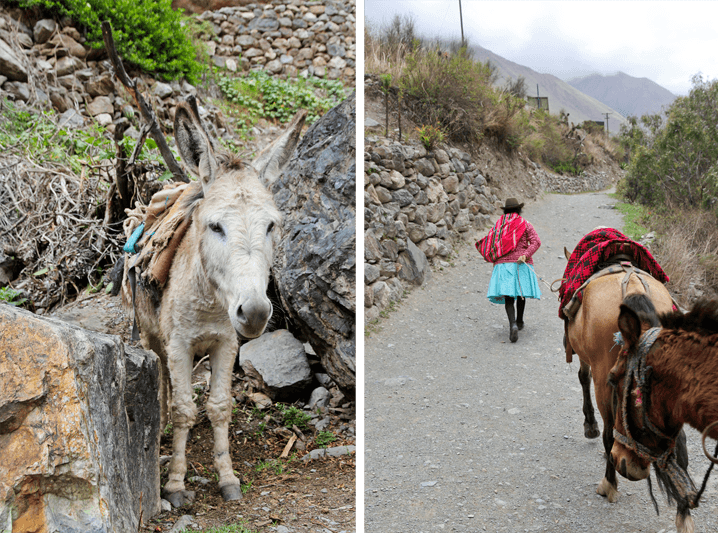 As I hiked watch-less and mostly kept my phone off to preserve battery, I’m really not sure how long our exact hiking times were. When I refer to times or distances, those will be based on the averages on the trekking map Llama Path provided us with. The first day of the trek was challenging but rewarding and manageable as we were all coursing with energy and excitement. We started with a five hour push towards the Wayllabamba campsite where we’d break for our first lunch. It was uphill the entire way, but the ascent was gentle — we started at 8,923 feet and stopped at 9,842. I was surprised to pass many villagers and domestic animals along this stretch — it was the only day of the trek where we’d pass populated areas, and many took advantage of the last chance to buy cold drinks, snacks, and supplies. 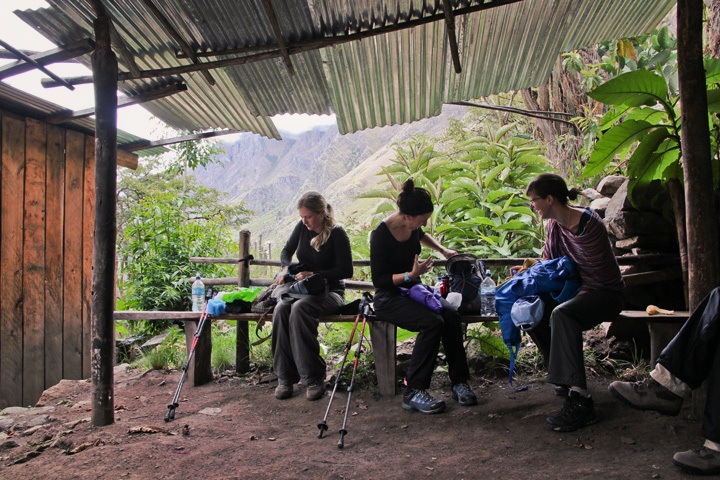 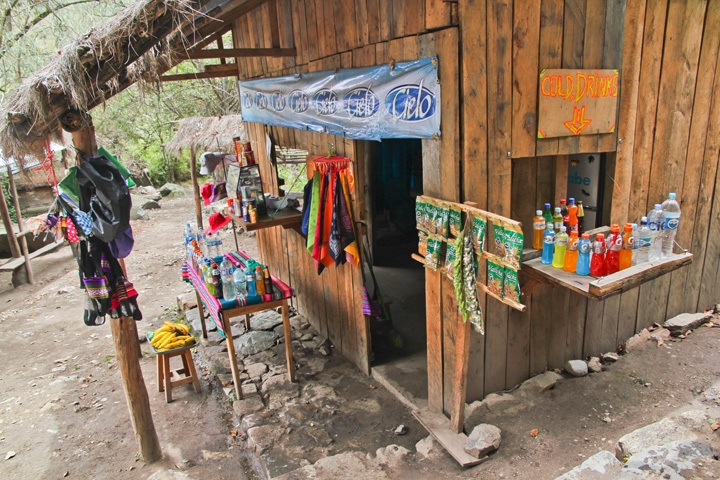 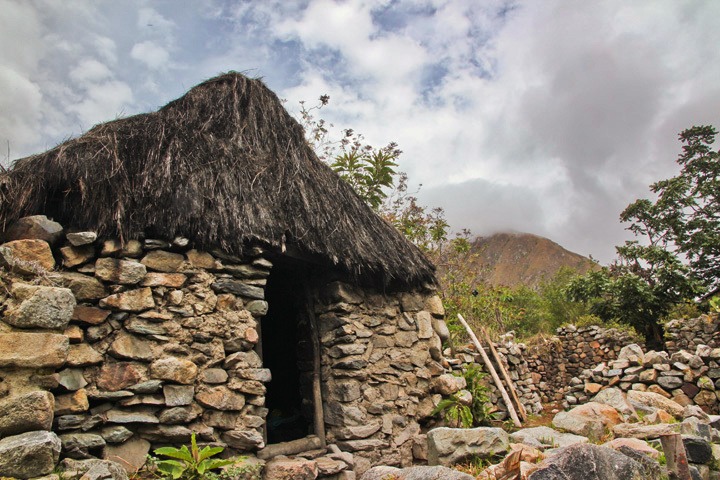 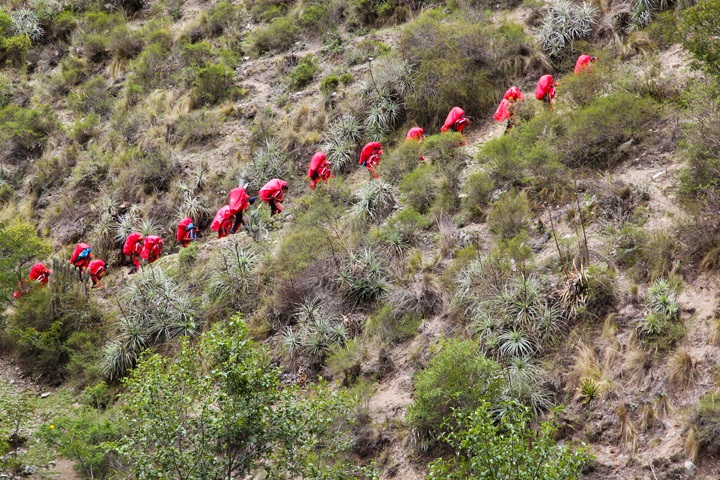 The highlight of the morning was passing the Inca site of Llactapata, an amoeba-shaped ceremonial site carved into a mountain valley. It was closely followed, however, by lunch — the first of many meals we’d have along the way that would simply blow us away in complexity and quality. The dining tent was extravagant compared to hunching over a plate of rice as I’d done when hiking Mount Rinjani in Indonesia, and I felt a pang of guilt thinking of the porters carrying everything from the stools to the tablecloths for four full days. However, the setup did allow for great table-side conversation with our fellow trekkers, and provided nice shelter from the light drizzle that followed us on and off throughout the day. 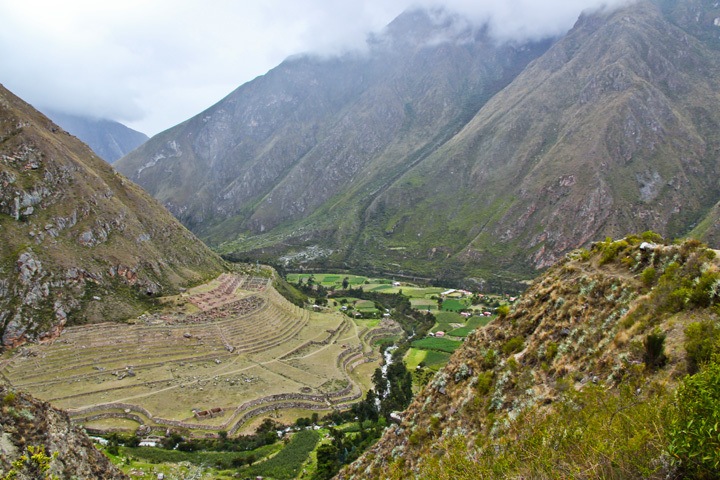 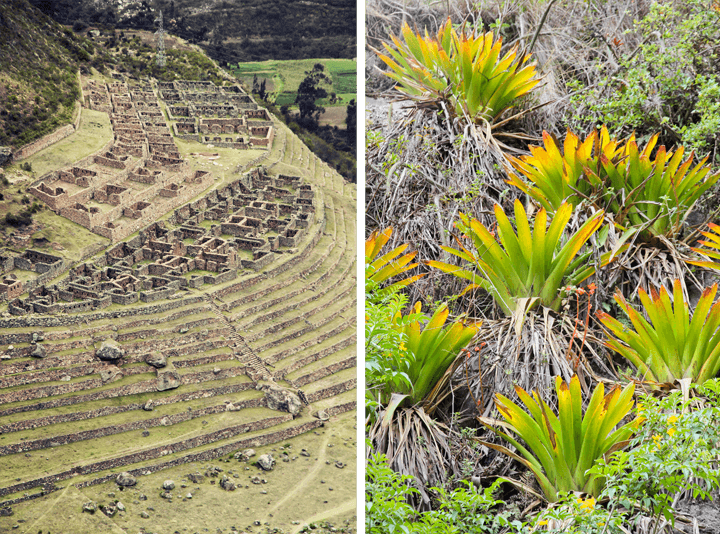 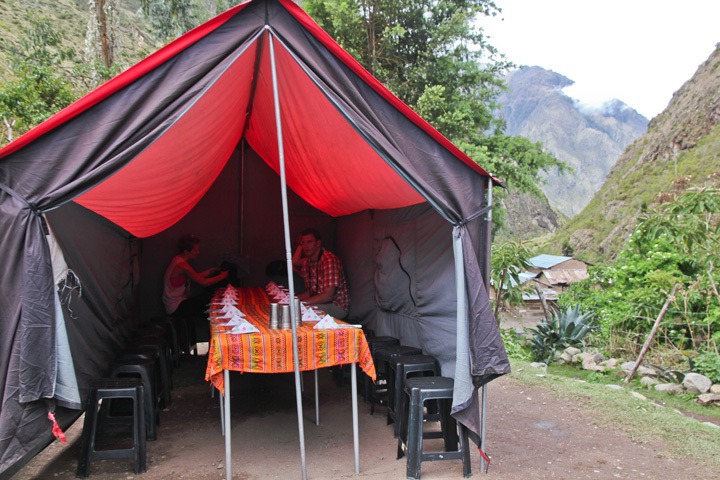 In the afternoon, as we pushed through a 1,000 foot ascent in two hours — causing me to really struggle for the first time on the trek during one very vertical stretch — we continued to hike as a group. Over the next four days the fifteen of us would separate into distinctive tribes based on our speeds, so it was nice to have one unified day together. 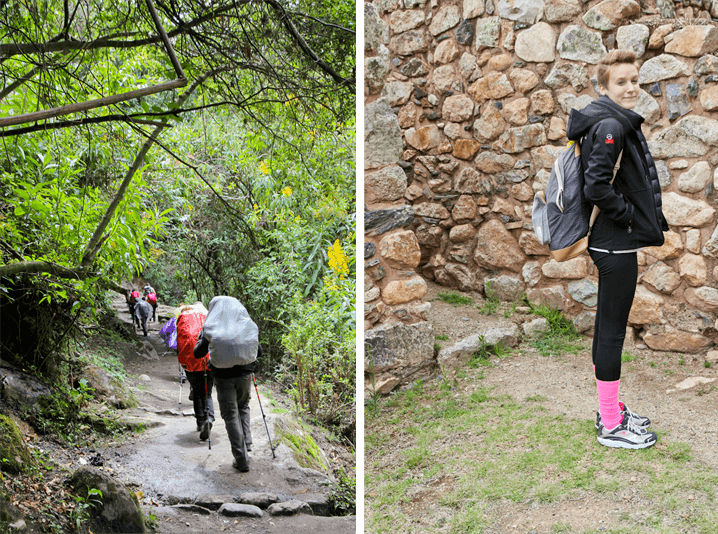 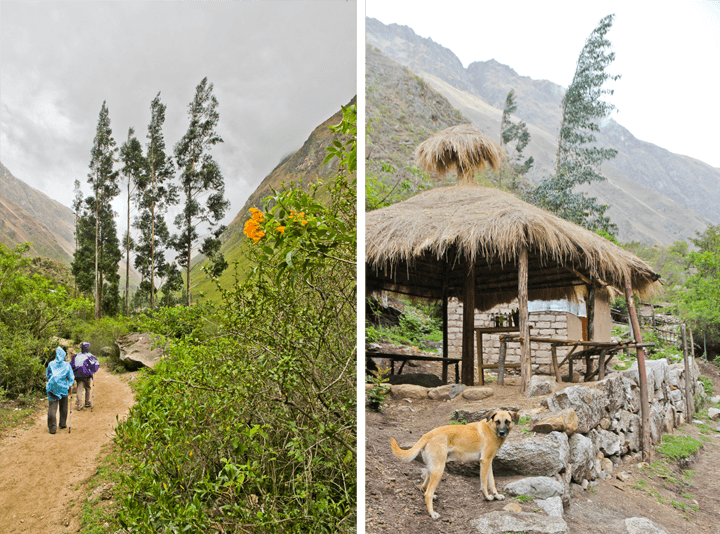 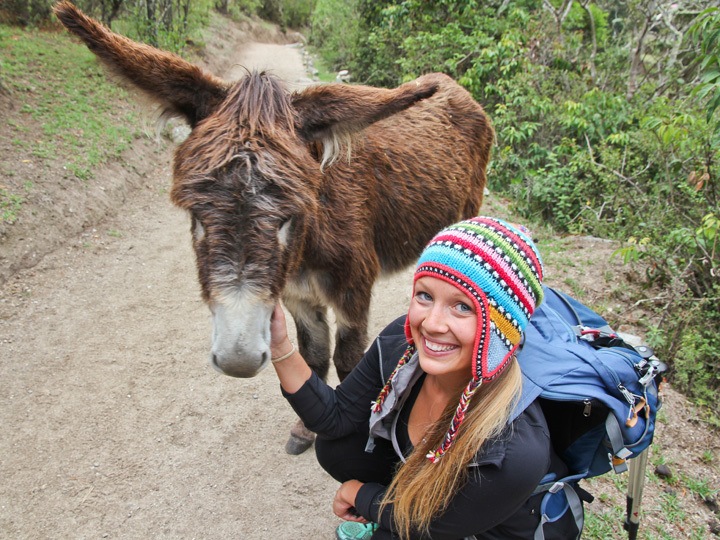 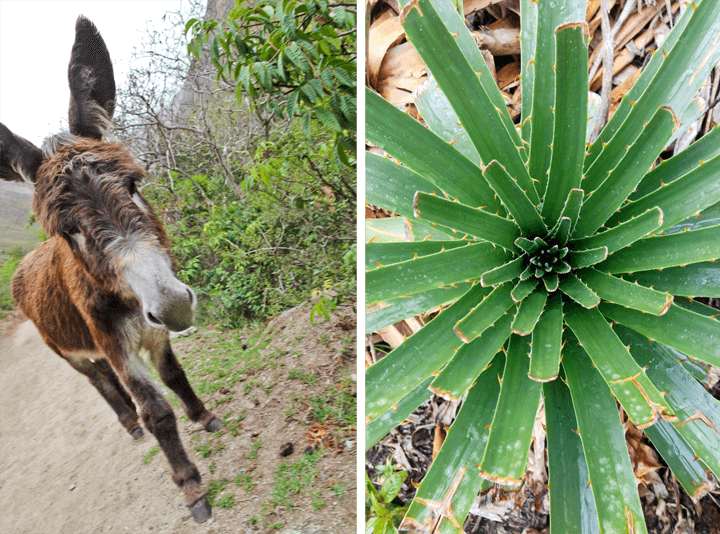 As we arrived at the Ayapata campsite for the evening, I felt a tension of emotions in my gut. On one hand, I was thrilled — I had made it through the first day without retreating up into a ball of defeat and rolling myself down a cliff. Victory! On the other hand, day two — and the fancifully-named Dead Woman’s Pass — was looming large in my mind.

We fell asleep at around our second grade bedtimes — hey, we woke up at 4:00am, remember? — after eating another fantastic meal and putting on every layer of clothing we had packed in order to combat the frigid post-sunset cold. As I drifted to sleep, I thought about a conversation I’d had with our guide that morning. I asked how often altitude sickness caused hikers to call it quits. He replied that it was the most common cause for mid-trek turn backs, but it was followed closely by the second most common reason — what he called an unwell mind. “Some people, they do not know what it is like to struggle. They don’t know what their bodies can do and it causes their minds to panic.” 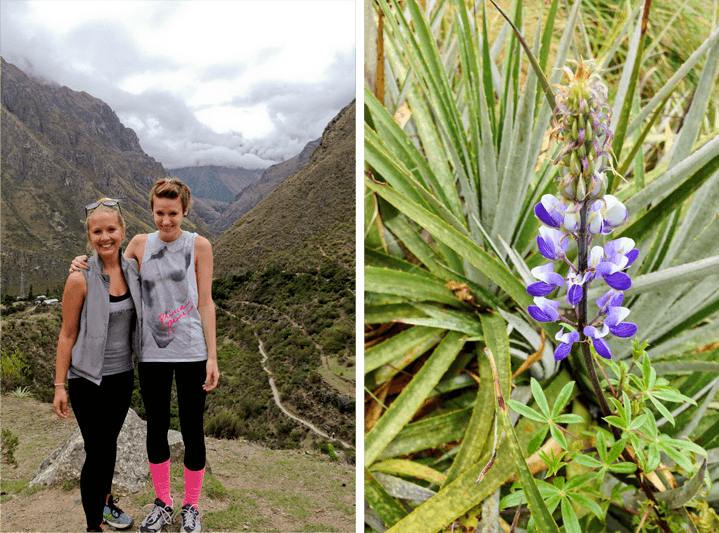 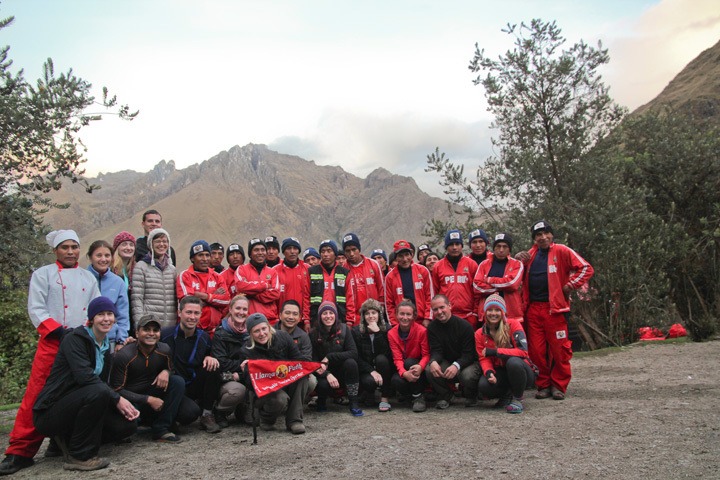 Day two started strong. I woke up well rested to nice weather, shockingly un-sore muscles, and a breakfast of pancakes with caramel flowers drizzled on top. I tried to keep those high spirits with me as we began our ascent. The dreaded six hour stretch ahead of us would take us across Dead Woman’s Pass, a peak reaching 13,779 feet. Within the first half hour of hiking, I stopped to take a photo and someone screaming “LLAMA!” in my direction. I looked up, smiling, and when I saw the panic on their face I turned around — a llama was indeed charging directly at me. It was amazing.

Unfortunately, not everyone in the group was feeling as chipper as I was. A few started succumbing to altitude sickness — in the end, seven out of the fifteen in our group would fall ill at some point, with severity reaching from mild to almost-couldn’t-continue. The group started to fragment, with the strongest hikers blazing to the front (Zoe leading the way!), the mildly-ill and the cardio-challenged (myself included) falling toward the back, and the severely altitude-affected bringing up the rear. It was on this morning that I formed a little squad with two British girls, Kate and Sarah and an Indian-American guy, Togi. 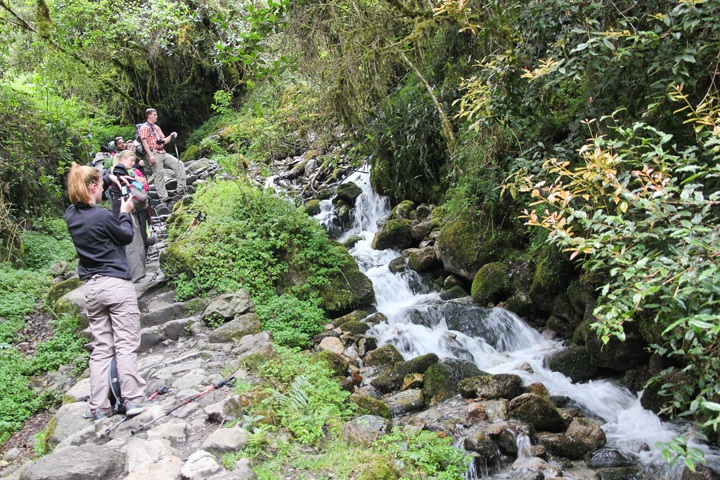 Things turned ugly as the rain went from a light drizzle to an angry downpour and both Sarah and Togi had to stop every few steps to be sick. While I am so sorry they had to go through that, I know that selfishly it helped me get through this, the most challenging part of the Inca Trail. Kate and I wordlessly took on the role of group cheerleaders, calling out chants through the rain and providing water and coca-leaf candy to our patients. By focusing on keeping spirits high and turning on nurture-mode, I was able to mostly ignore my own struggles and discomfort. When we paused at the peak of Dead Woman’s Pass, the fog was so thick we could see only a few steps ahead, my fingers were going numb from the cold, and my heart and lungs were begging for mercy. Surprisingly, my muscles felt strong — I would have thought my legs would be crumpling beneath me.

Needless to say, I have no photos from the summit of Dead Woman’s Pass. 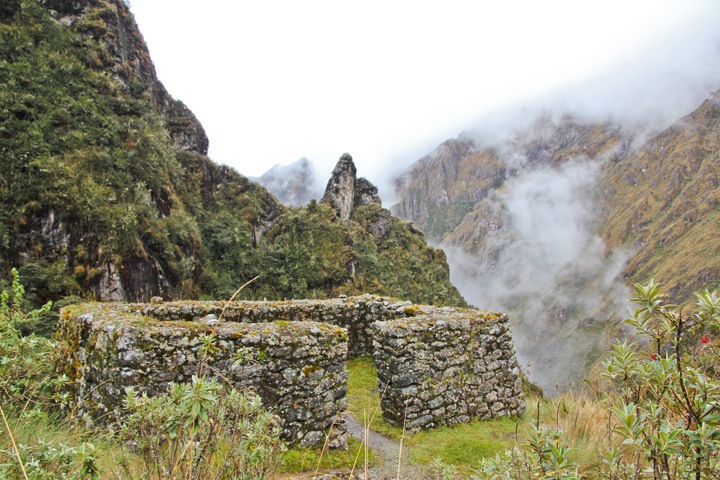 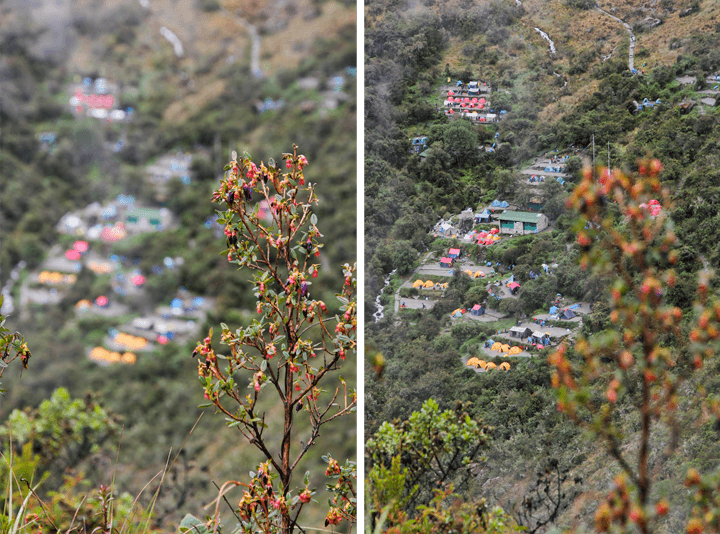 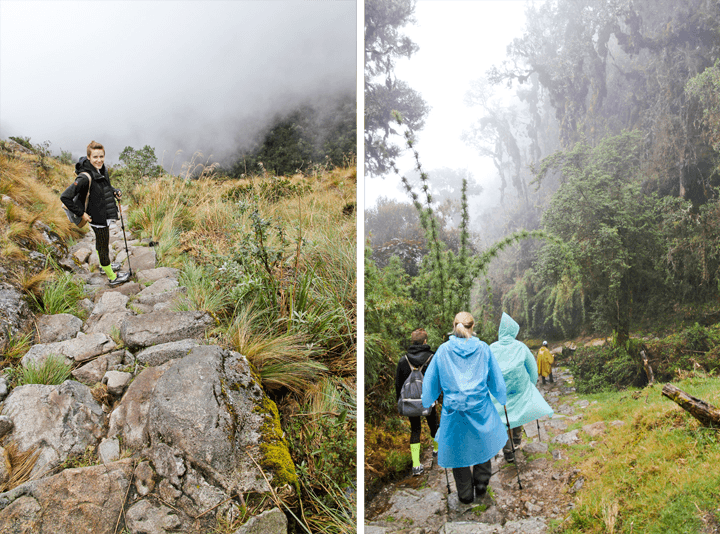 The descent back down to 11,700 feet was pretty ugly as well, and reaching our lunchtime campsite of Pacaymayu provided little respite as the rain was still pouring down — making that dining tent setup seem entirely less frivolous in the process. We were all soaked, half the table passed on lunch due to altitude sickness, and I cursed the fact that I didn’t have dry socks to change into.

And the day was not over. We still had another four hours to go, up and down yet another peak, this time to a mere 13,123 feet! As we set off again, I experienced my only symptom of altitude sickness — a splitting headache that almost knocked me sideways. That, combined with inertia after a long lunch break, made those first thirty minutes some of the most mentally challenging of the trek. To push through it I turned on my iPhone and used my precious battery reserves to turn on music, get in the zone, remotivate myself, and forge ahead solo.

As we reached the second peak, I knew my struggles were over — it’s different for everyone, but for me descents are pretty painless. I yanked out my earbuds and was almost giddy with happiness. From here on out, the Inca Trail would be nothing but fun. 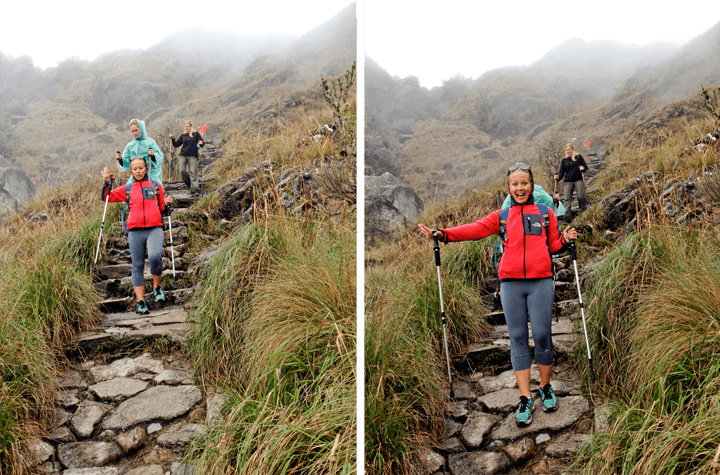 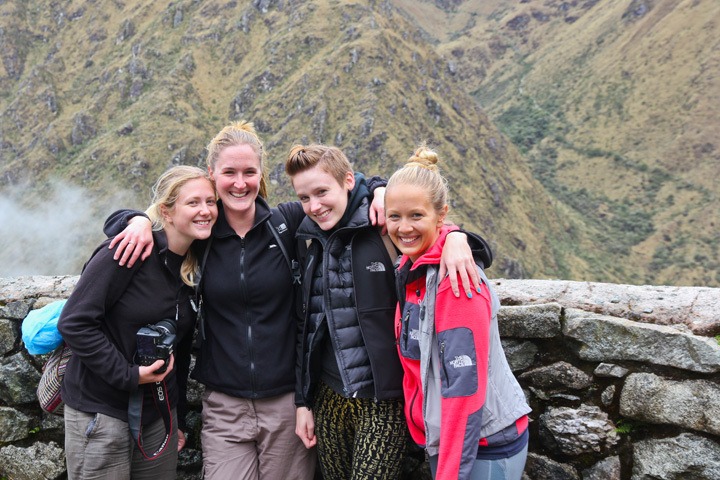 I felt the kind of exhausted satisfaction that comes from achieving something you weren’t entirely sure your body would be able to do. In fact, for all my struggles, never once did I think that horrible thought — I can’t do this. I knew all along that though it might be painful, I would get there. With all challenging ascents out of the way, it would be smooth sailing — at least for this uphill-hating hiker. We were well on our way to Machu Picchu.

Note: I will do an entire post on logistics, costs, tips and practical information about the Inca Trail and Llama Path. Stay tuned!

A Rainforest Expedition: Where We Stayed