Sometimes traveling long-term can make you a bit jaded. You find yourself halfheartedly remarking what a nice mountain that is while your thoughts wonder to what you are having for lunch or sighing, yeah, that beach isn’t bad while you fiddle with your phone. You become spoiled. 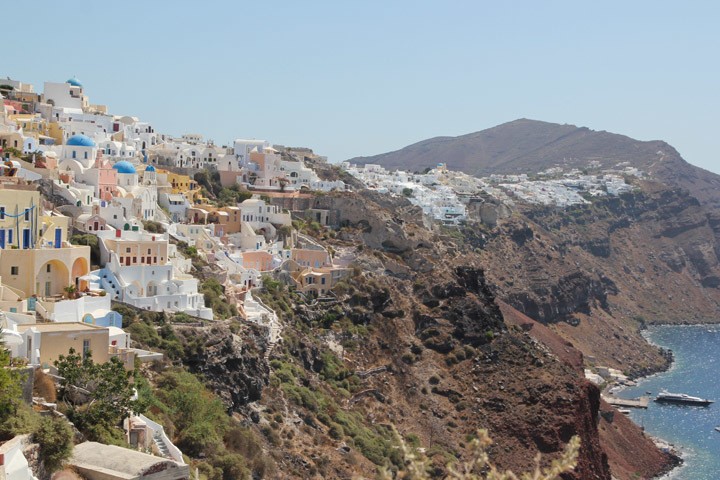 And then you go to a place that stops you in your tracks and makes you wonder how you got so lucky just to be there. 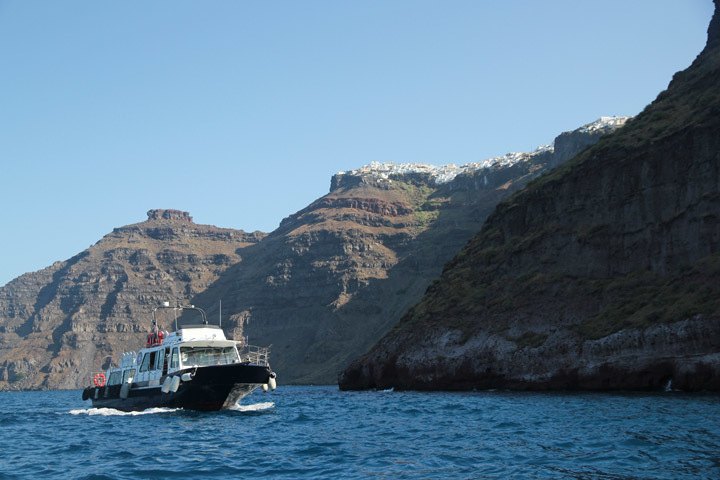 As our ship entered the foggy caldera and I caught my first glimpses of Santorini, I knew it would be one of those places.  Santorini is a geographic anomaly, the remnants of a massive volcanic explosion that destroyed the island’s original civilizations and transformed it from one land mass into several. What remains is Thera (the main island that people are referring to when they say Santorini), Therasia (a much smaller and sparsely inhabited island), and Nea Kameni (the volcano in the middle). The water between the outer ringing island and the central volcano is the caldera. 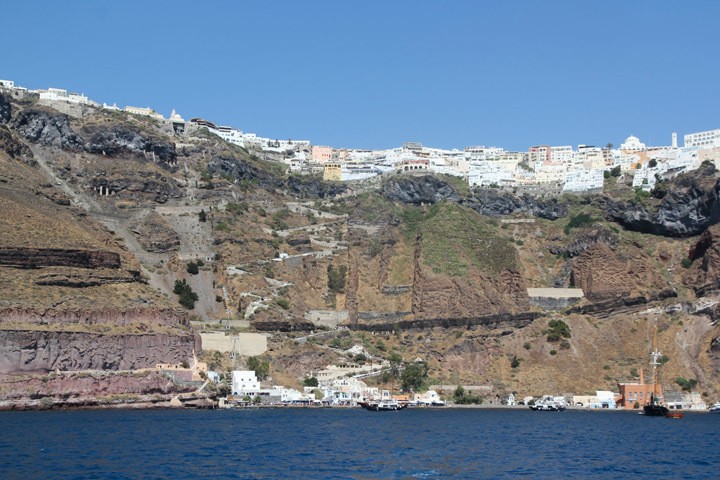 Can you see the zig-zag path the donkeys (and people!) use to walk to the top?

We had to take a small tender boat to reach the port, which was connected to the main town of Fira via a sheer cliff. There are three ways of reaching the top: by foot, by donkey, or by funicular. I was dying to go the traditional way and ride a donkey but after reading too many conflicting reports about the wellbeing of the animals I just couldn’t do it in good conscience. So flying up the funicular we went. 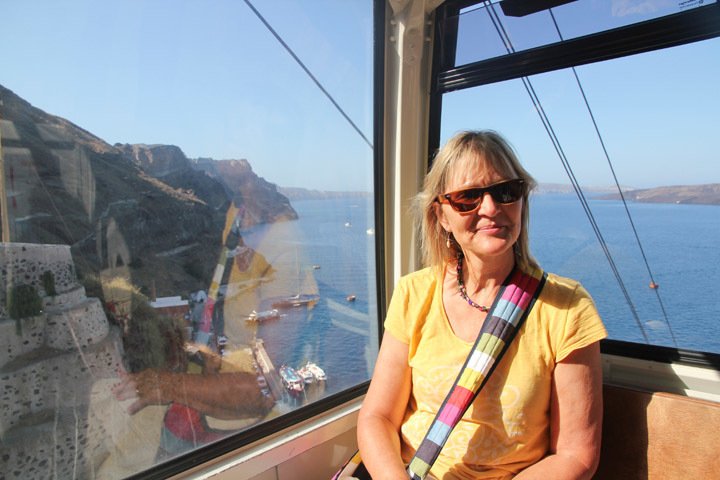 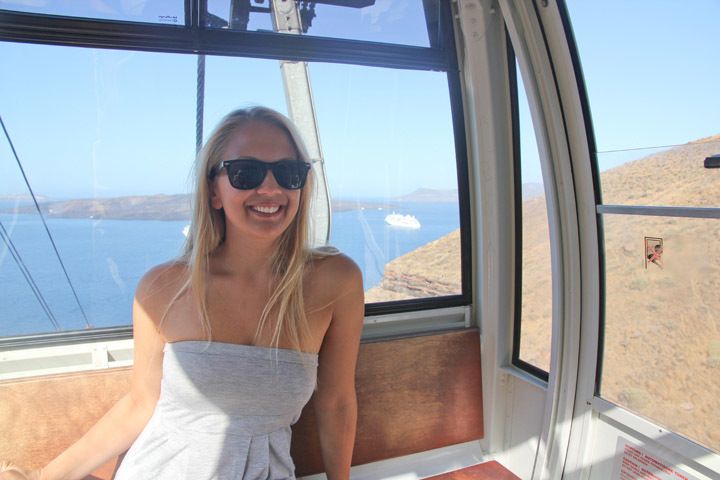 our ship is playing peek-a-boo behind me

With our limited time in Santorini we chose to bypass the port town of Fira and instead head to the more beautiful Oia. We rented a car for the short drive because we were worried about the buses being overcrowded and slow with the taxi strike still in effect. It ended up being a bit of a splurge, but sometimes that’s what a holiday is all about. Plus we got to stop for as many photo ops as we wanted, something I don’t think a bus driver would have been so keen for, no matter how nicely I asked. 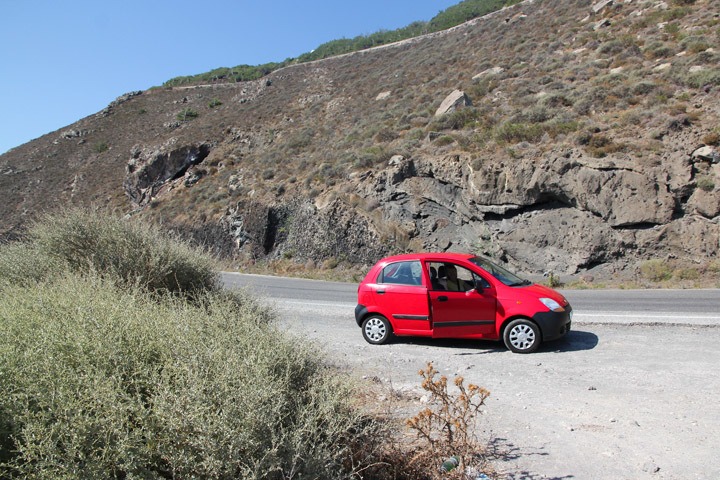 While the west coast of Santorini is sheer cliffs, the east coast rolls slowly out to the sea. 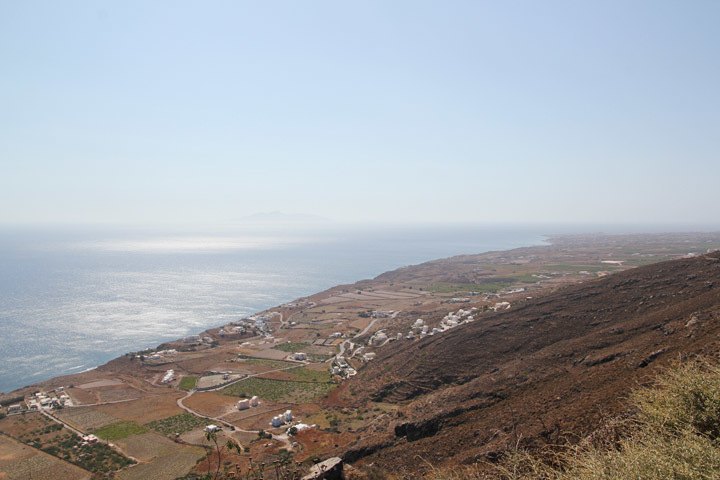 Soon we had reached lovely Oia and parked to explore on foot. It was love at first sight. 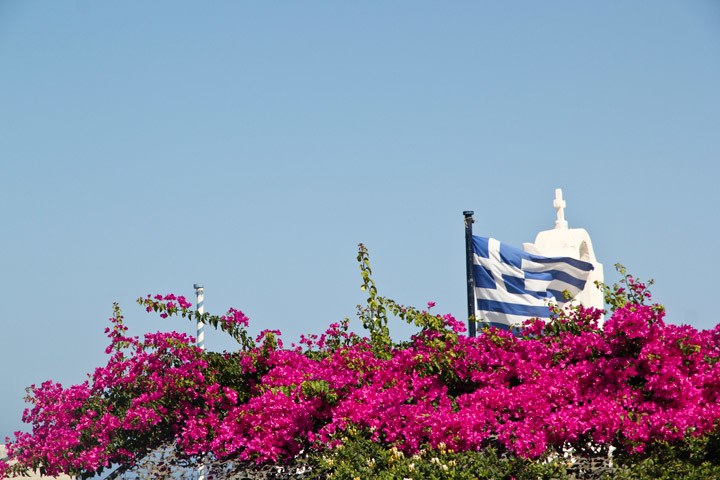 Everything in Oia seems perfectly in place. There are no jarring advertising banners, no unsightly internet cafes, no skies full of ugly power lines, no piles of garbage to pull you out of the fantasy. 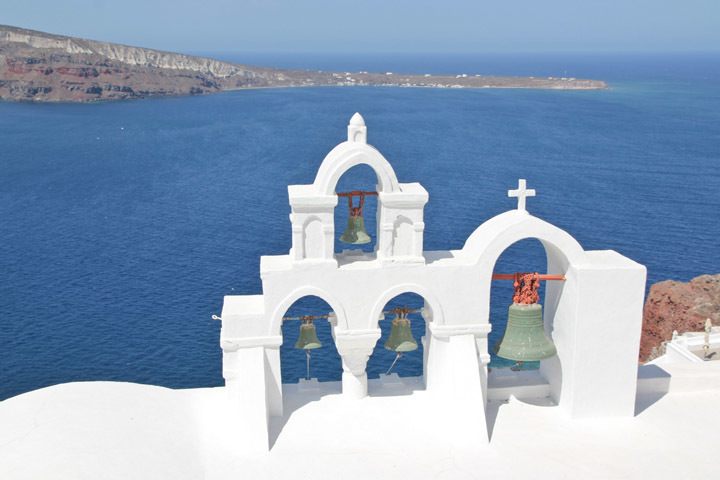 Instead there are amazing mosaics of colored roofs, an endless labyrinth of curving streets, and the most dramatic vistas across the caldera. My travel writing teacher once gave us a list of forbidden adjectives and topping the list was “charming.” I’m sorry, Mr. Farley, but there just isn’t a better word in the English language. This place was oozing with it. 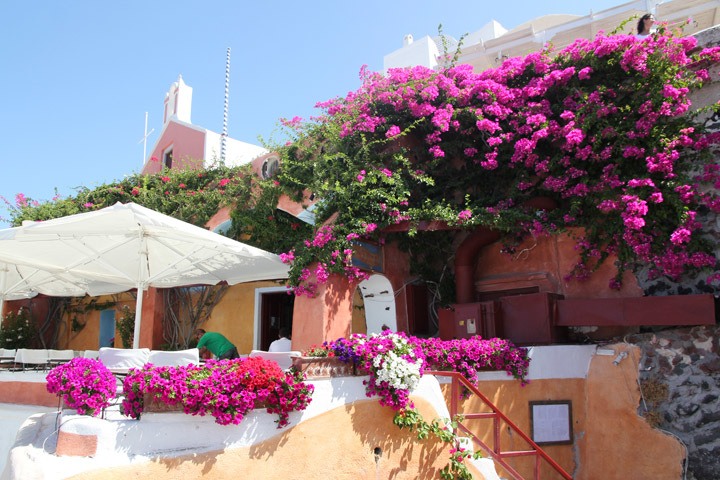 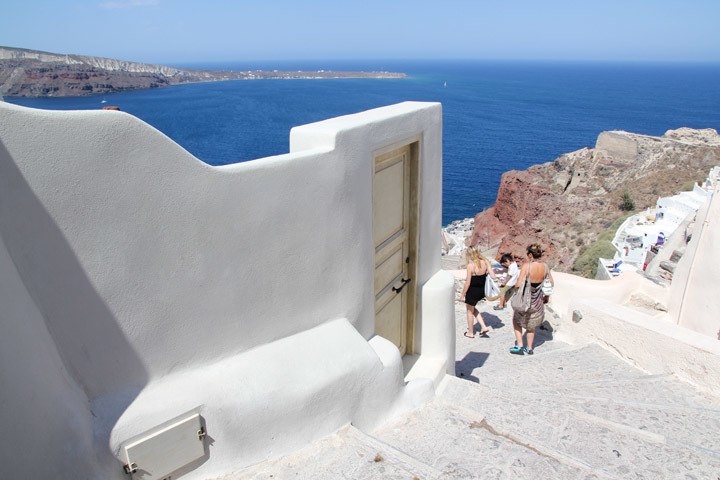 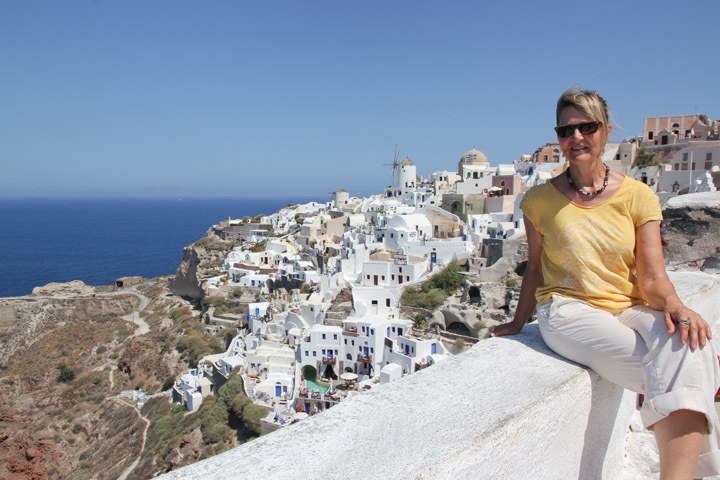 Having decided within moments that this was a place we were going to return to, we checked out a few hotels that caught our eye from above for future visits (the ones we could find in the maze of white at least!). That aside, we mostly just wandered around saying “wow” and repeating to each other how amazing it all was. Bystanders were surely impressed by our conversational skills. 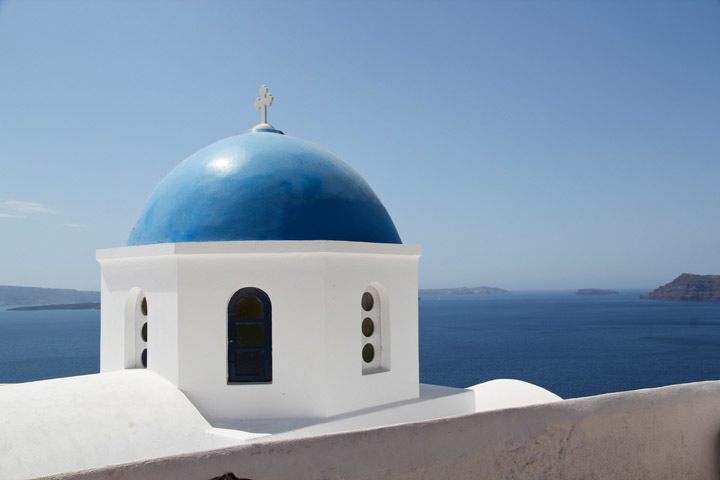 When our tummies started rumbling we were spoiled for choice of tavernas with million dollar views. While I’d never been a fan of Greek food before this trip, I thoroughly enjoyed nearly every meal I had. This lunch specifically featured the best bolognaise sauce I’ve ever tried. I later learned it was due to the tomatoes, which thrive on neighbor Therasia’s volcanic soil. 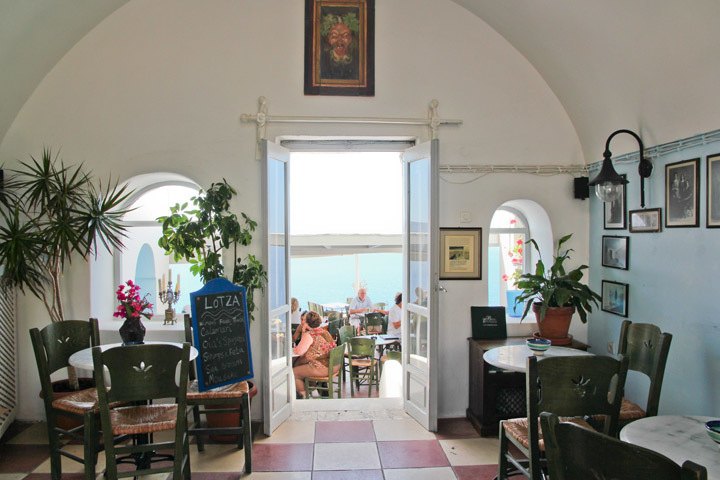 After lunch we sadly conceded it was time to head back to Fira for our evening adventure. As we began walking in the direction of our car we were met by a herd of donkeys, perhaps on their way home from work! 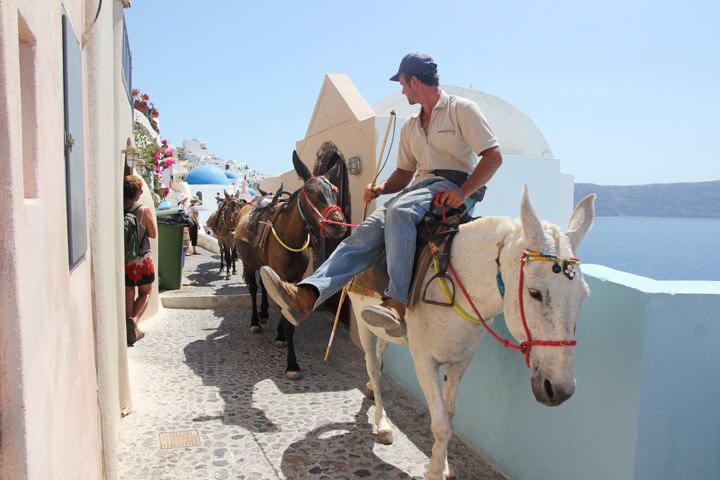 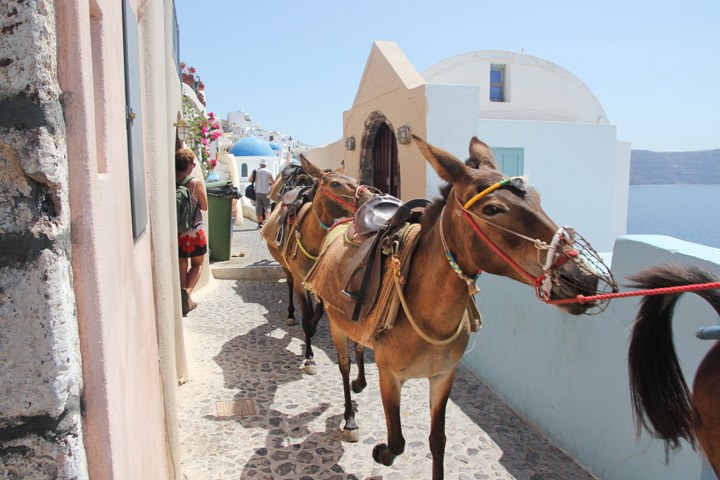 I loved Oia and anyone heading through the Greek isles would be mad not to stop in this special place. And I was comforted to see a hostel on the outskirts of town, so I know that when I return on my own steam I’ll be able to afford a place to lay my head. 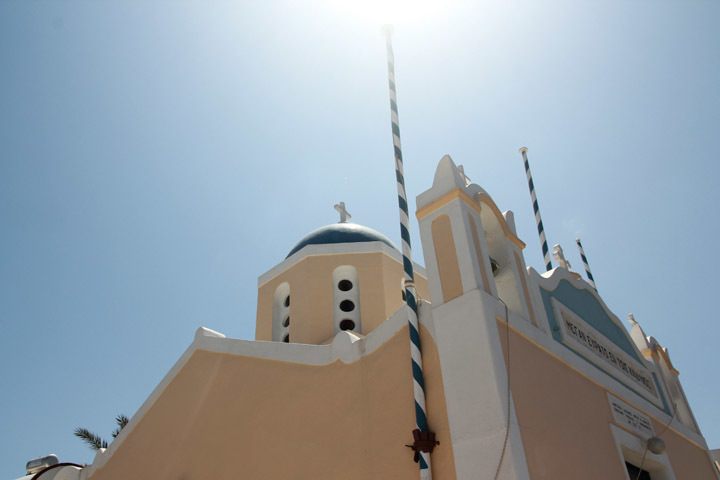 The journey wasn’t over yet as we took a different route on the way back into Santorini (another benefit of renting a car!) and passed my first black sand beach (pretty big deal for a beach lover like myself) and through a beautiful farming community. 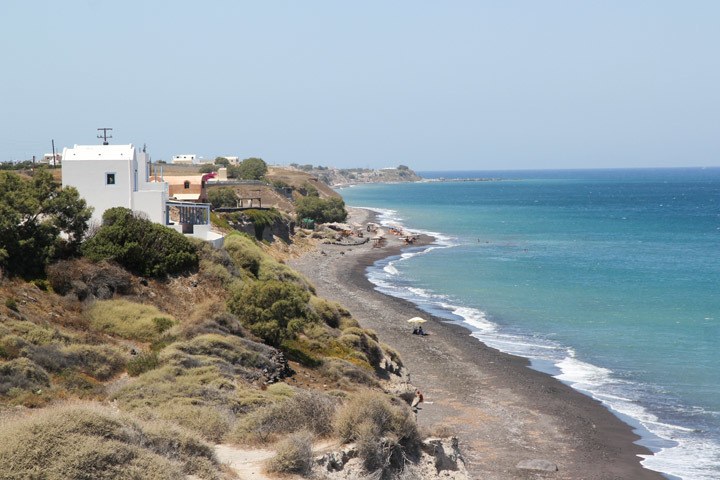 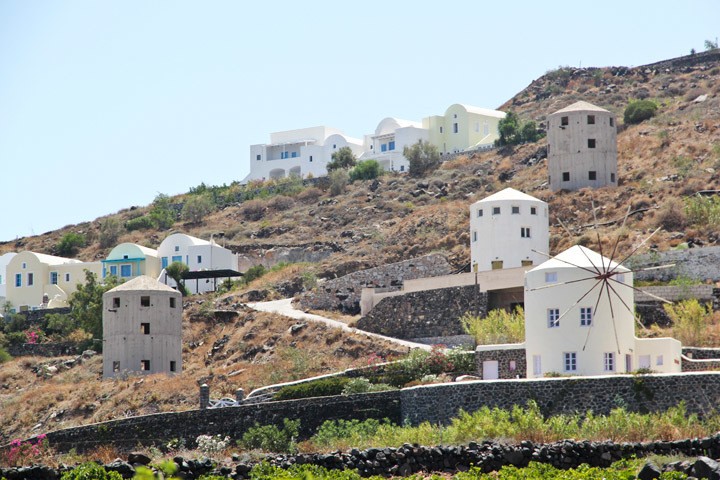 After getting lost on the streets of Fira and having to be rescued by a kind stranger who spoke no English only to realize we were one block from our car rental destination, we were back down the funicular and onto Part II of our Santorini adventure… 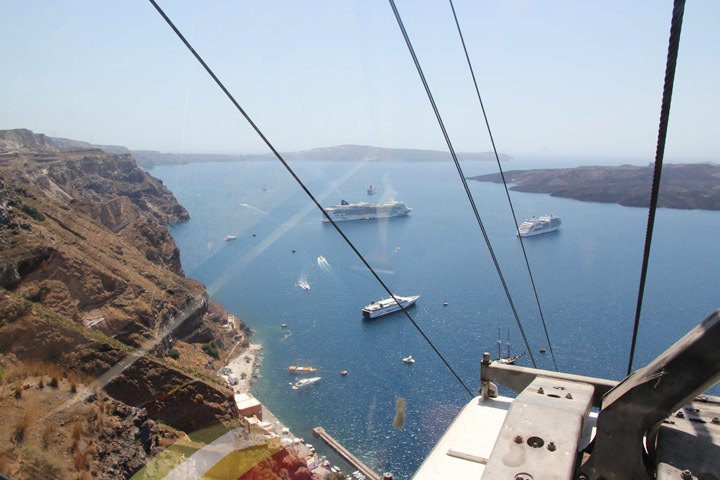 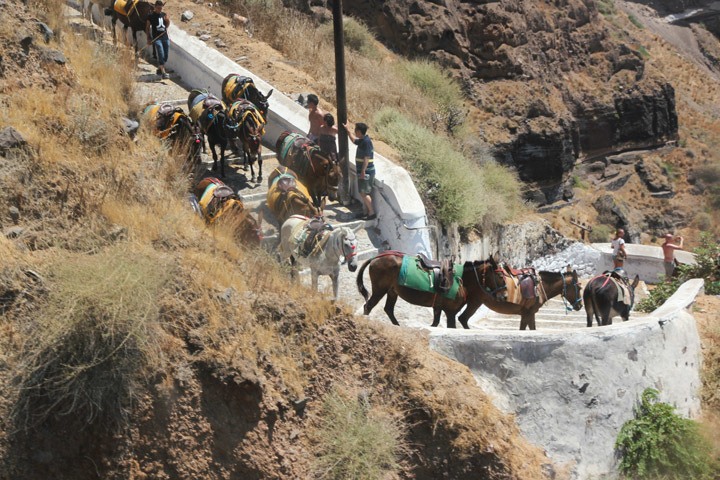 Holy Wow! The Monasteries of Meteora

Falling For Far Out Beach Club