One Day in Rhodes

Both the delight and the bane of cruising is the fact that every morning, you wake up in a new place. Today, it was a delight, as we just weren’t the biggest fans of Crete. So we got a new day on a new island: Rhodes. 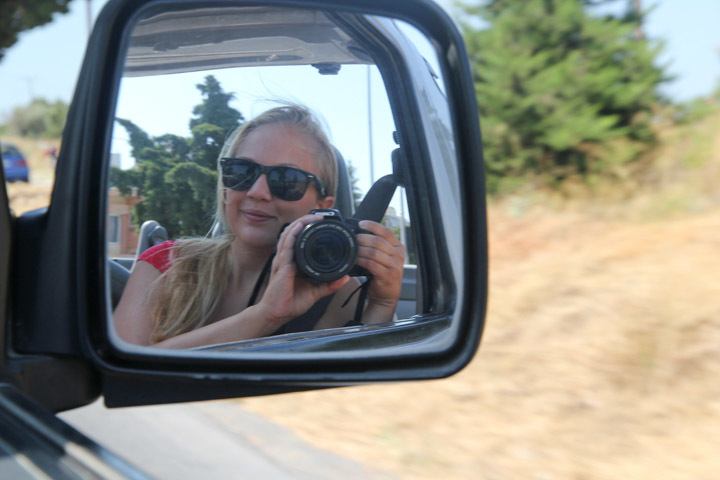 Rhodes is the largest of the Dodecanese islands in terms of size and population, as well as being home to a UNESCO world heritage site and home of one of the Seven Wonders of the Ancient World.
The two main attractions are the walled medieval city of Rhodes and the village and acropolis of Lindos. We wanted to hit both in our one short day, so we decided to rent some wheels.

Word to the wise: There are just three car and motorbike bike rental shops set up right between the cruise ship terminal and the City of Rhodes, and they have limited inventory. So if you happen to be visiting during a taxi strike and your only way to see Lindos is to rent a car and you don’t want to see your mother have a near meltdown, get your bum off the ship early. Or have great luck like us and get the last car available on the island. Either works. 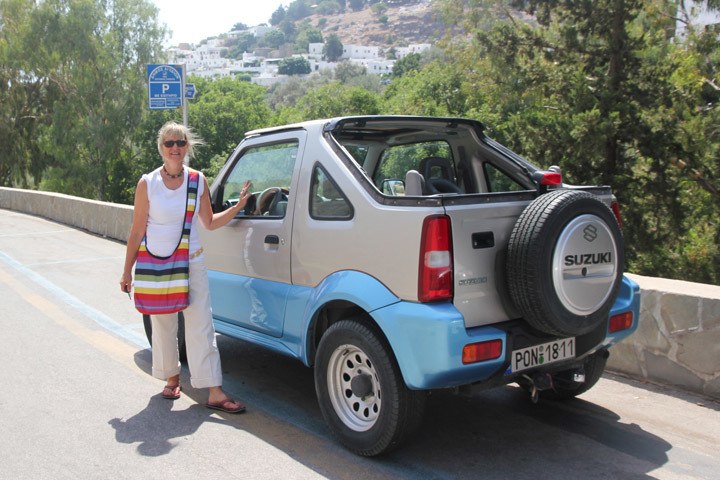 And what’s all this about a taxi strike anyway? I got carted around all day! 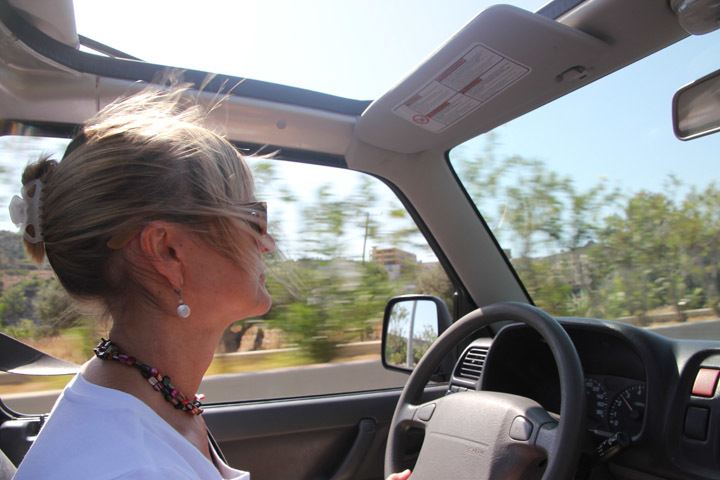 After a lovely drive through mountains and along beaches we arrived in scenic Lindos, which is comprised of a beautiful beach, a charming whitewashed village and high above them both, an Acropolis with stunning views. 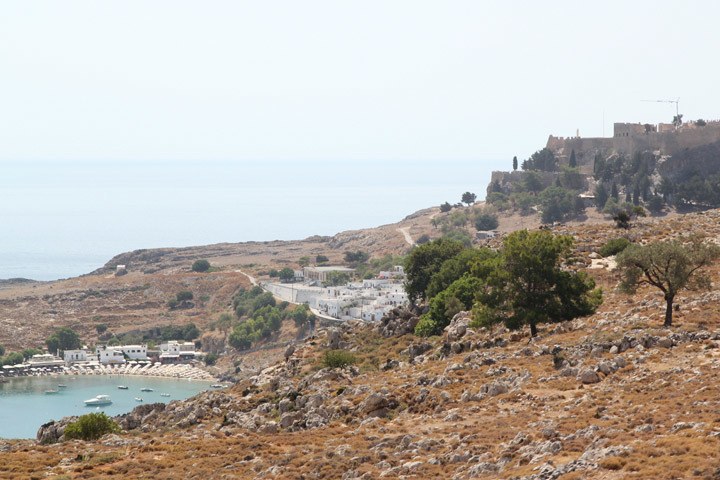 After finally finding parking on the outskirts of town (no cars are allowed in the village), my Mom was raring to go but I got sidelined by some free roaming baby donkeys that just happened to be giving each other a wee snuggle. 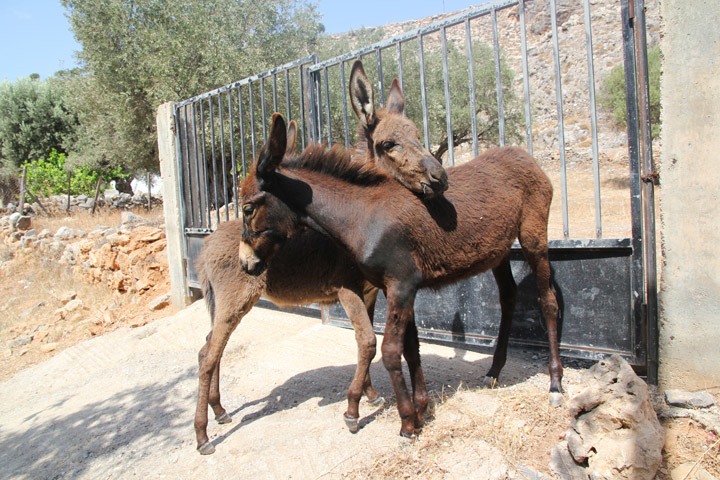 Okay, right. So now that you’ve seen the cutest thing that’s ever happened in the universe, we can move on.

Think fast! Which donkey is real?! 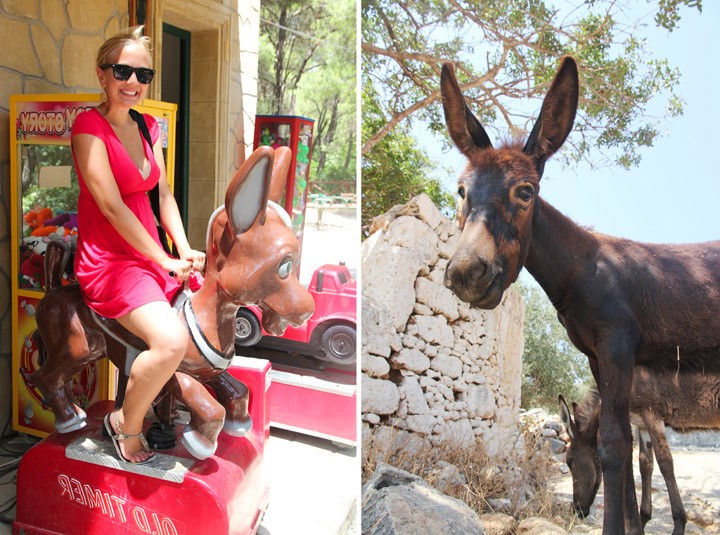 Heading into the cobblestone streets of Lindos, we were assaulted by crowds, vendors, and more donkeys. It was a bit overwhelming, to be honest, and not the quaint experience I was expecting. 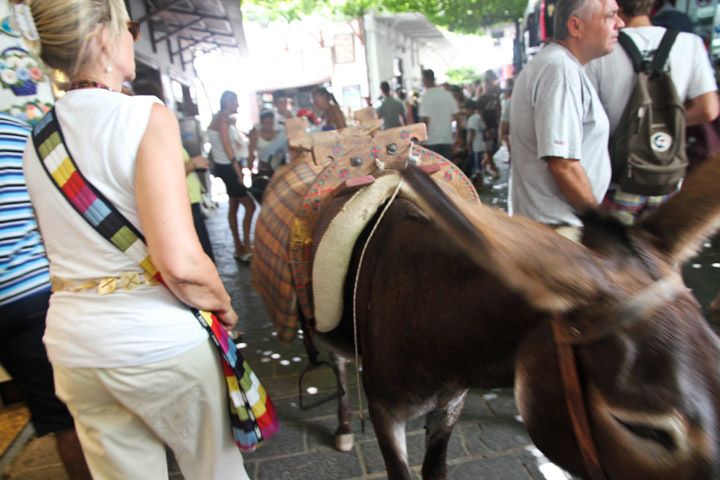 But like any major tourist destination, if we went just a bit beyond the main area, we were able to find almost total solitude. The beauty of Lindos is preserved by strictly enforced regulations forbidding new development, and it pays off on these quiet and peaceful side streets. 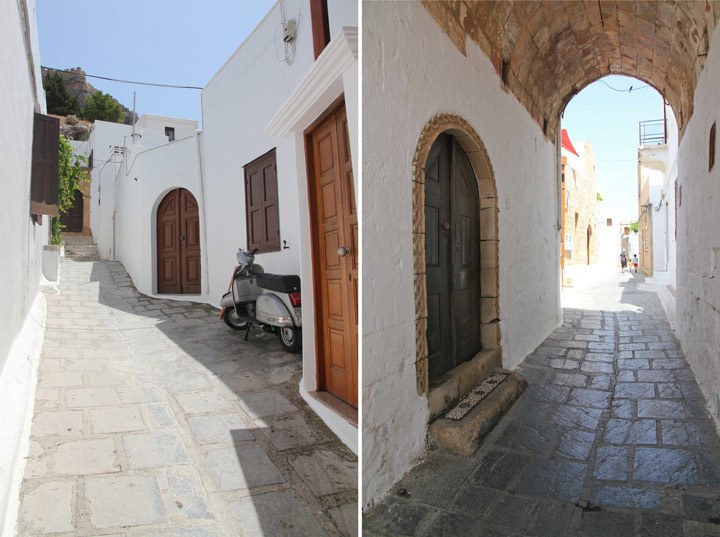 Wouldn’t it be great to rent one of these hidden away homes for a week? There were so many little restaurants, bars and shops just waiting to be explored, not to mention this amazing view of the beach below. 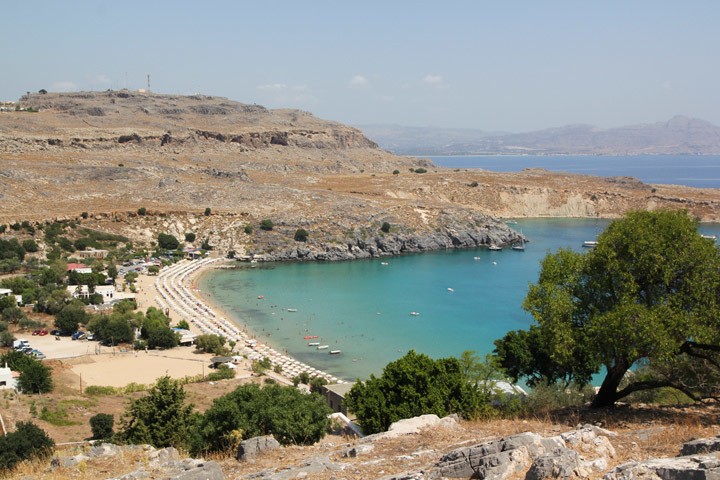 I could have spent the day exploring Lindos’s winding alleyways, but we were in a bit of a time crunch so we made our way to the Acropolis.

I can not tell you the first historical fact about this place. I can’t tell you when it was built, who lived there, or why they left. 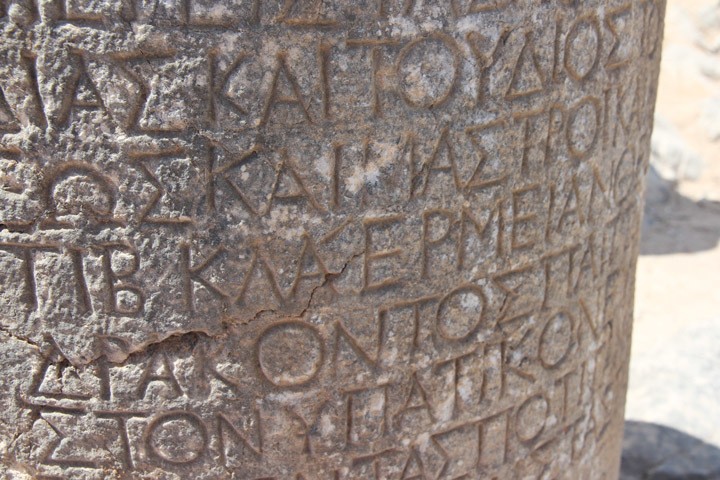 But I could tell you that the ocean and the sky seemed to kind of run into each other far over the horizon. 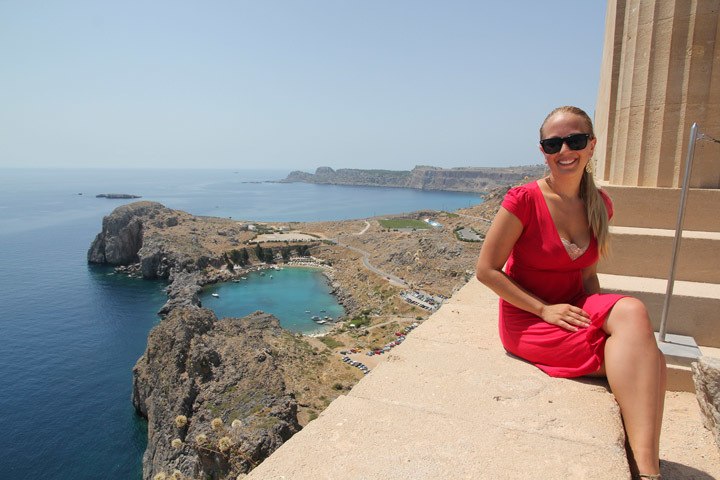 That the breeze from the ocean provided a lovely respite from the blazing heat of the day. 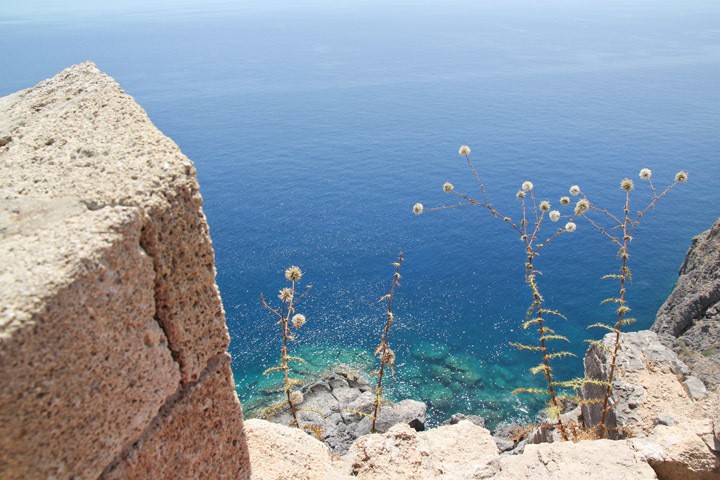 And that the soft colors of the stone against the blue background of the sea and sky made for one of the most beautiful vistas of my whole trip. 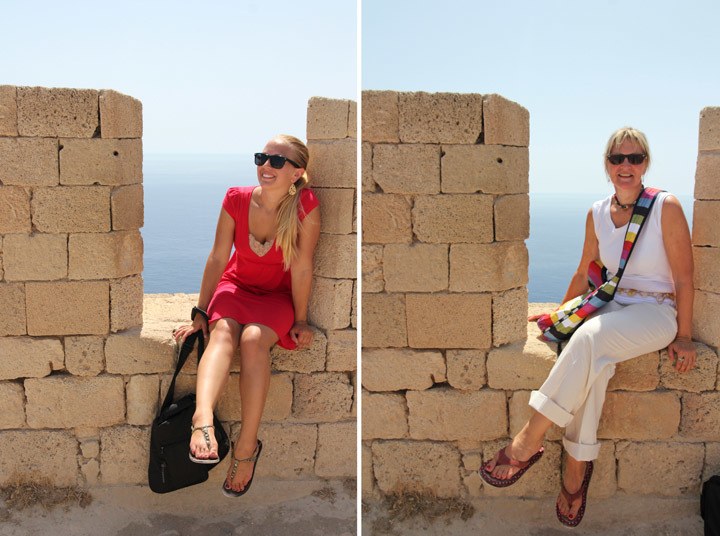 This is the kind of historical site I can get behind. 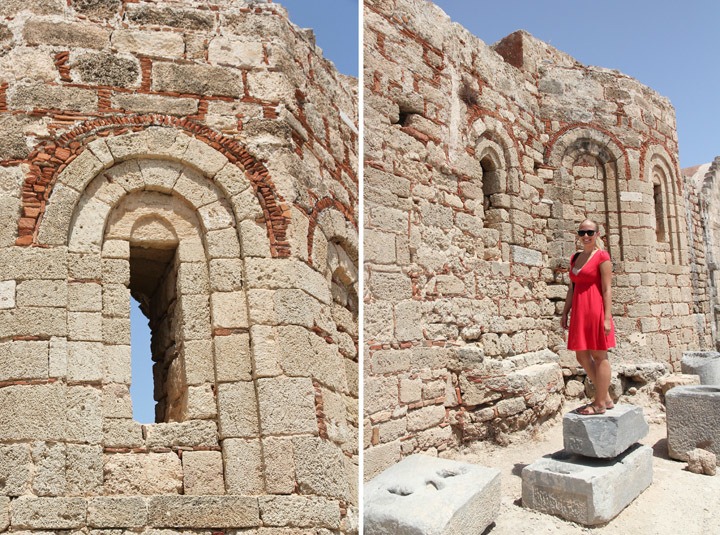 After returning our car and quickly mourning that we didn’t have more time to spend in beautiful Lindos, we set out on foot to explore the walled Old Town in the city of Rhodes. My Lonely Planet guidebook lists “getting lost in the Old Town Rhodes” as one of the top 10 Greek experiences. Since I am a backpacker and therefore legally required to own the Lonely Planet guide to every country I enter, I was pretty excited, to say the least. 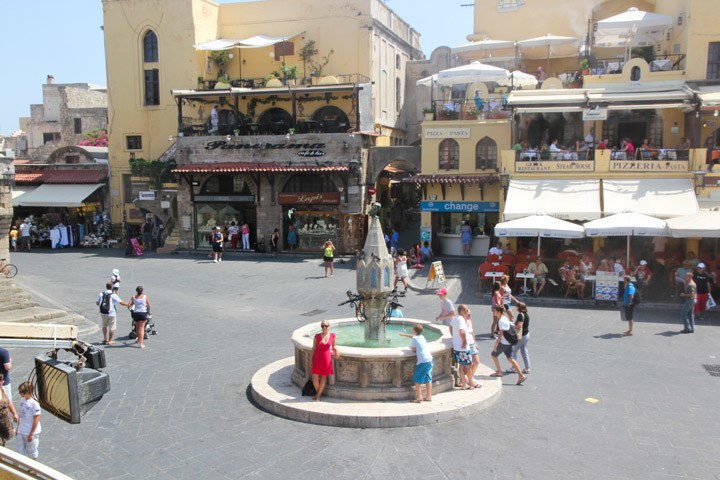 The Old Town is a UNESCO world heritage site and within its walls it is also a living, breathing city with restaurants, museums, and residences. Unfortunately we were in port on a Monday so we couldn’t visit any museums but luckily we are both pretty happy to simply wander and explore. 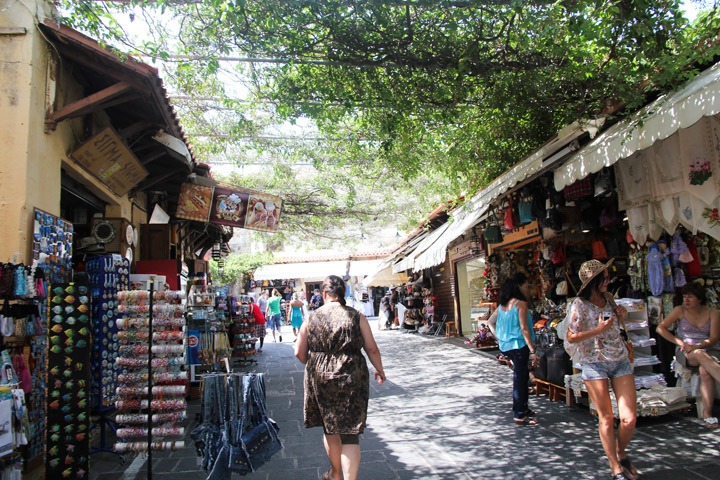 Before we left the ship the “local expert” had handed us a map with the “best streets” marked. We quickly realized these were the most touristy streets, filled with cheap souvenirs and mediocre restaurants. However, had we not originally followed the bogus map, I would have never laid eyes on this: 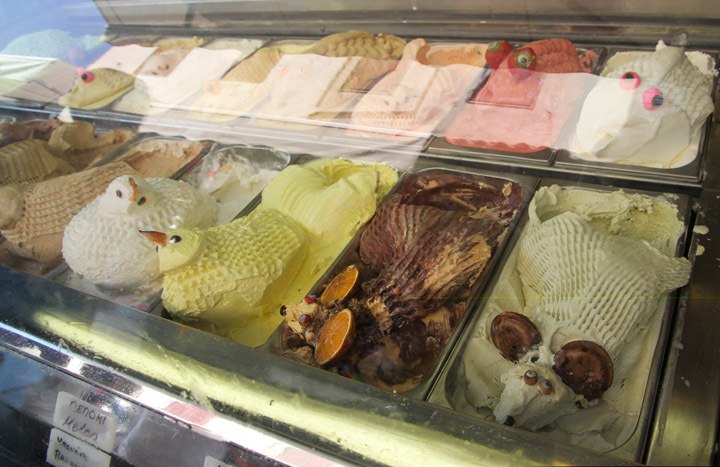 I think this was the first moment in my life I didn’t want ice cream. How could you destroy that kind of art? (My favorite is the red one in the back with the strawberry eyes.) 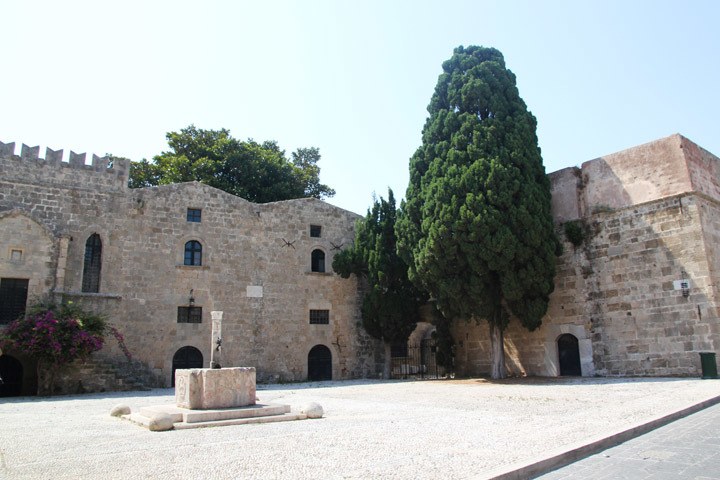 Ice cream art aside, we really were much more impressed with the Old Town when we ventured away from the commerce areas and to the fringes. I can say without shame that I was totally shocked that a place like this was in Greece. It seemed to have more in common with medieval London than a country associated with clean, geometric, whitewashed buildings. 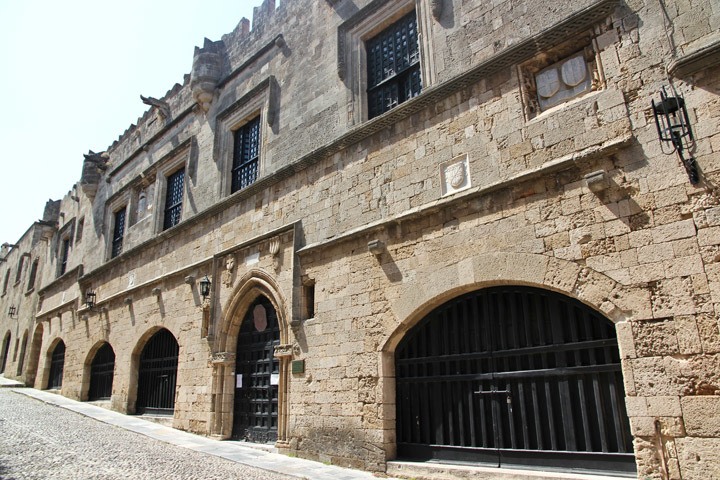 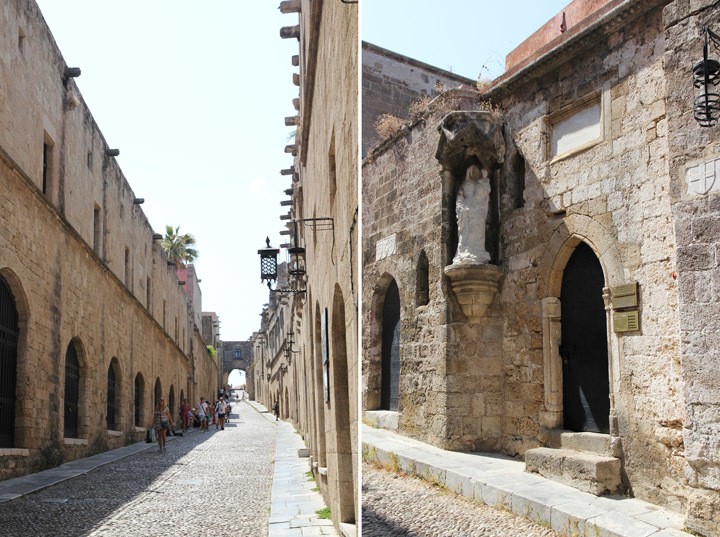 One attraction that was open was this beautiful mosque, adding again to my already confused mind trying to reconcile a medieval city and a Greek island. 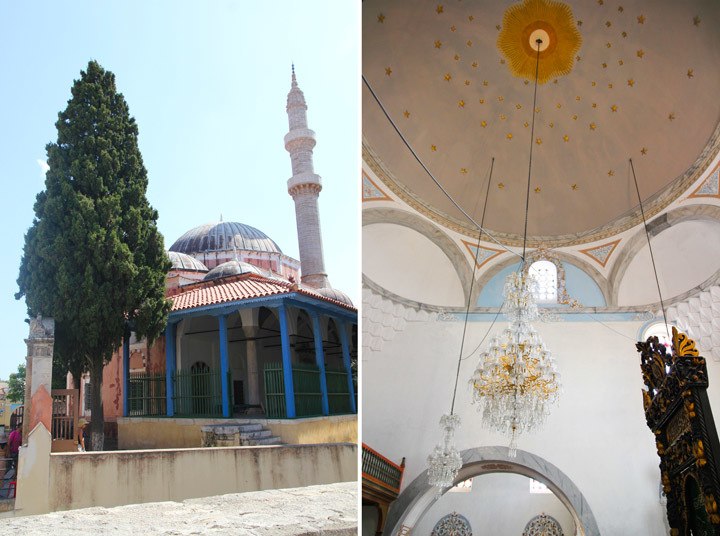 Venturing deeper into the city we found this character filled antique shop and spotted a few tucked away cafes oozing with charm. We passed a few hotels and daydreamed about spending a few days trying to get our bearings in the enormous maze that is the walled town. 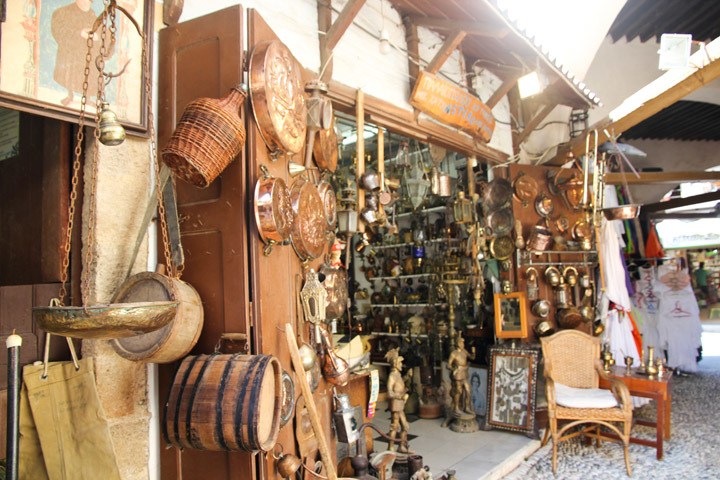 Most interesting of all were the residences we passed lining the inside of the wall. In the stuffy summer heat, doors and windows were left open and as we walked past we would hear snippets of laughter, conversation, and television programs. I can only imagine what it would be like to live within a piece of ancient history, surrounded by a maze of cobblestone streets and walled away from the outside world. 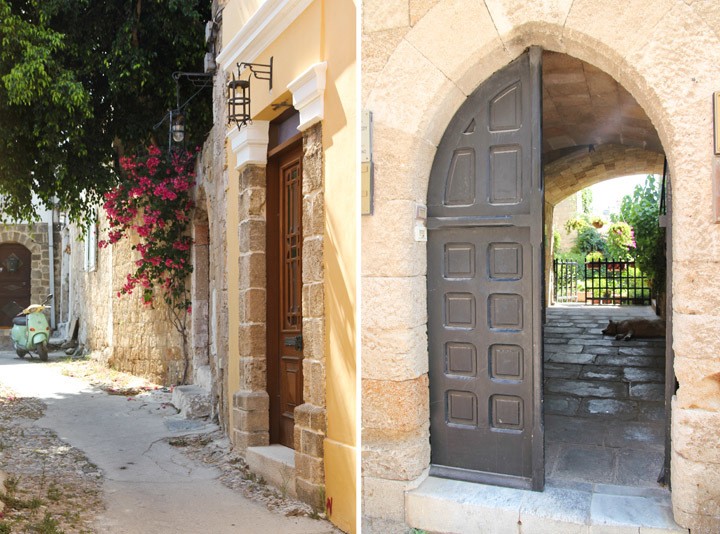 I fell in love with this side of Rhodes. If I had to be walled away somewhere, this wouldn’t be a bad place to be.

To see all our photos from Rhodes, visit my Flickr set here.

Exploring the Amazon Onboard The Aria Part II

The Cretaquarium Photo of the Week 14
18 Comments...