Our first port of call on our Mediterranean cruise was Iraklion, Crete.  It was kind of a throwaway stop for me, and as I couldn’t find anything in my guidebook or online that made my heart go pitter patter (other than the pre-vetoed Cretaquarium) I had given my Mom my blessing to plan the day as she pleased. She heard from friends that the Palace of Knossos was the thing to do, so she booked us into the ship’s tour. 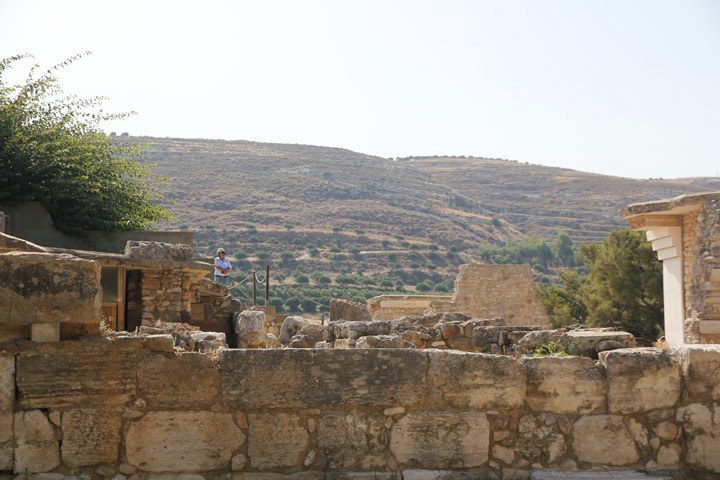 It was only day one and were already about to learn a great lesson: DIY shore excursions! (For those not on the craft world circuit: DIY=Do It Yourself and is used as a noun, verb, and lifestyle.) Working in Grand Cayman last summer, I saw the huge disparity in what people paid while booking through the ship versus booking on their own, and I felt smugly superior to those silly tourists. Still, when my Mom and I were planning our trip we fell prey to the two big factors the cruise ships bank on: the convenience of booking through them and the paralyzing fear of being left behind at port. (If you book a tour through the cruise line and it runs late or encounters an emergency, the ship must wait for you. If you book on your own, you can be left behind and will be responsible for getting yourself to the next port.) Plus, a promotion at our time of booking left us with $500 of onboard credit each. I was prepared to use it to have a massage every single day or bathe in premium liquor or, well, that’s pretty much it- but my mom pointed out it was more practical to use on things we’d have to spend money on anyway, like days in port. 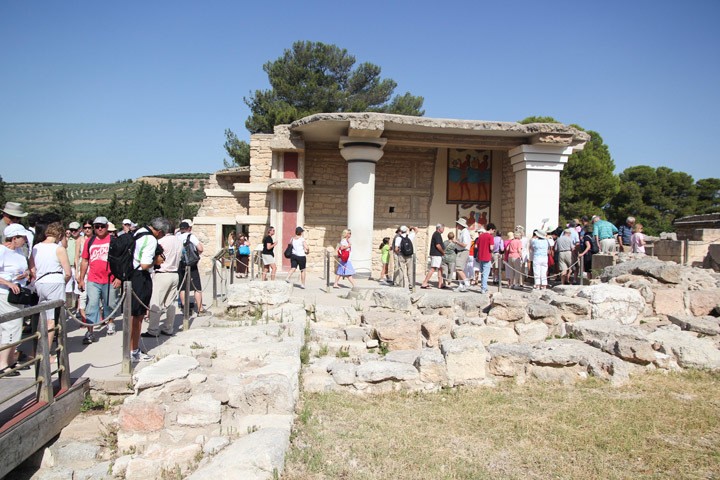 the crowded groups we wanted to avoid!

When we checked into the ship we went and asked a few questions at the excursion desk, including how many people would be on our tour of Knossos Palace the next morning. When we got our response, that there would be three groups of 30, we politely informed them that being in a group of thirty people waiting in lines, jostling to take photos and straining to hear the guide was our own personal version of hell, and we returned our tickets for a full refund before heading back to our cabin to ask Google what the deal was. We found a Tripadvisor forum thread reassuring us Knossos was super easy to tackle on our own, and so we started plotting what to do with all the credit we had saved. Hello, Cristal bubble baths! (Is Cristal even a top-shelf beverage? My years of requesting “the cheapest bottle you stock that preferably does not taste like rubbing alcohol” has not led me to a deep understanding of the finer alcoholic beverages on the market. I therefore base all knowledge on which brands famous rappers dedicate their songs to.) 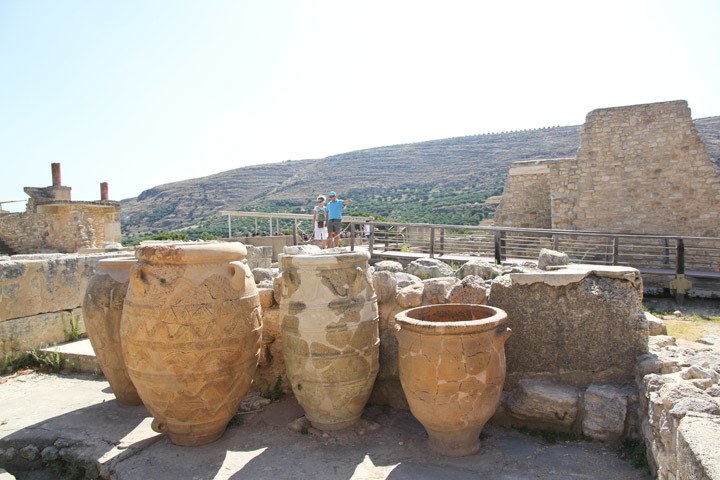 The next morning, we were greeted by dolphins swimming alongside the boat as we docked. The charm ended there as we walked off the ship and into an urban, industrial port city that looked like it needed a coat of paint. Taxis were still striking and so we made a beeline for the bus station, where there was a clearly marked separate ticket stand with signs in English for buses heading to Knossos. Total cost? Three euros each… round trip! Buses leave every half hour and the journey took less than 15 minutes. 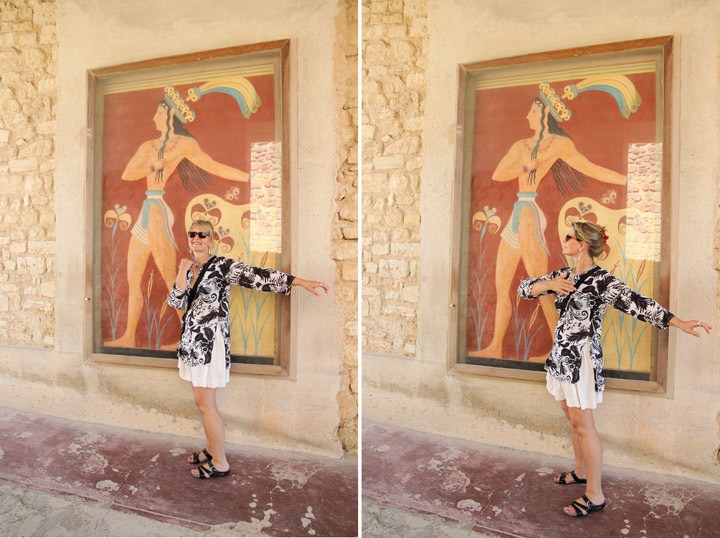 Upon arrival we found that it was possible to hire our own licensed tour guide on site for a 1.5 hour tour. They leave with a maximum group of 8 once they have received 80 euros. So as a pair we could have had a private guide for 40€ (65 USD) each- still less than the $89USD group tour we almost went on via the ship! If you waited for a group of eight, you’d get a semi private tour (compared to the 30+ people groups we saw) for only 10€! We decided to pass and use our guidebook and the signs around the site (in English!) instead. 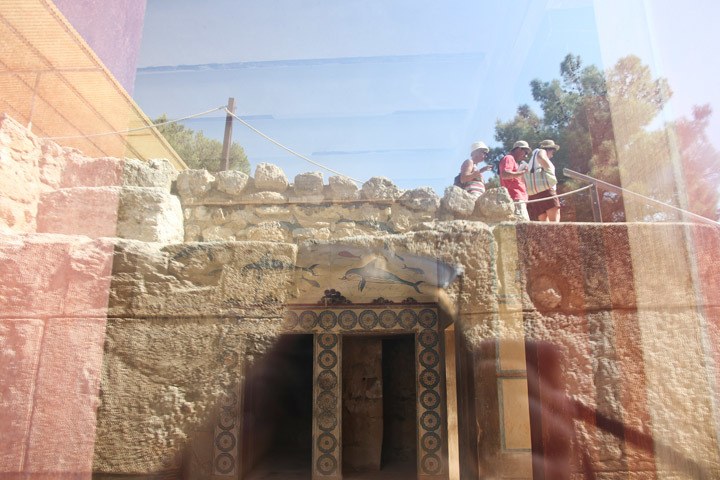 Knossos is a Bronze Age archeological site that was once Crete’s center of Minoan civilization and culture. Excavation kicked off around the year 1900 as the passion project of a wealthy Englishman, Arthur Evans. There is controversy surrounding the historical accuracy of the restorations. While the ruins are beautiful to look at, its hard to imagine that the paint colors are based on hard facts and not the creative imagination of a play-archeologist run wild. In fact, some of the most famous frescoes were painted by a father and son artist team who have been accused of injecting some of their own creativity into the job. But who am I to complain? It makes for some amazing photos! 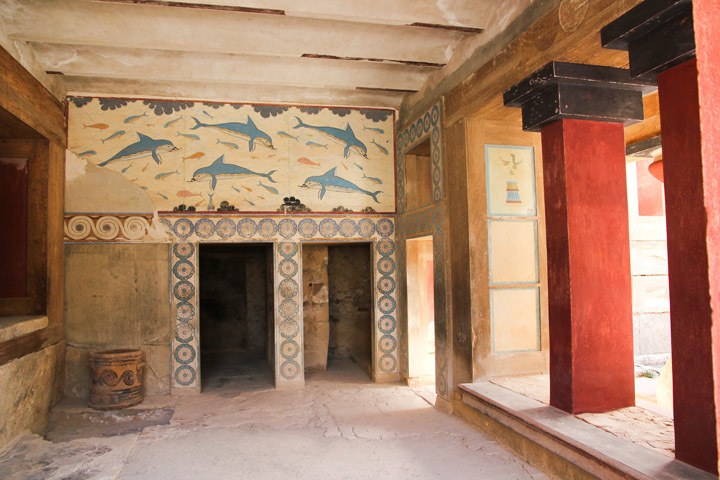 basically totally made up (kidding! sort of!)

In the end, I wasn’t overly impressed with Knossos. Part of it I’m sure is circumstantial: searing heat and huge crowds do not make for the best impression. Also, based on the few photos I had seen I was expecting the complex to be much more intact. Maybe my capacity for picturing rocks as an ancient city needs work? On the other hand I kept thinking back to Angkor Wat and how blown away I was by it, and how I could have spent days exploring… and I’m not sure why I didn’t get that loving feeling with Knossos. 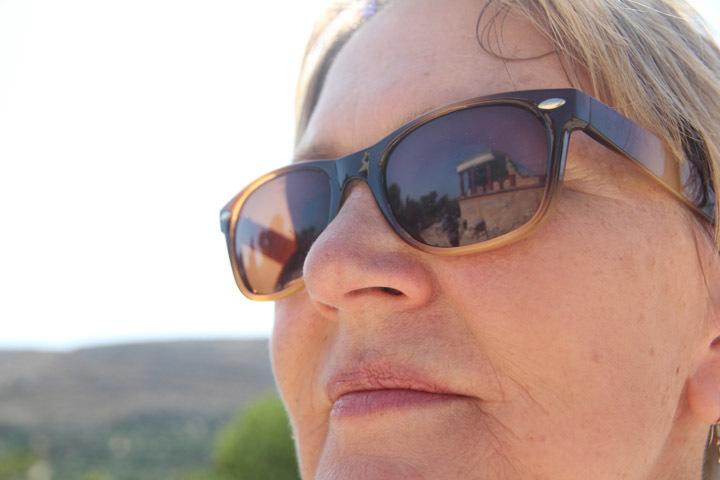 So due to my unenthusiasm, I’m even more glad that we skipped the pricey, crowded and line filled cruise tour. Here’s the breakdown of our savings:

Cost for Two of Touring Knossos

So no big surprise, we saved big (um, $156.75!) by taking public transit and skipping a guide. But I was shocked to realize we could have had a completely private and personal two person tour for less than what it would have cost to be herded around like cattle! If the taxi strike wasn’t on I’m guessing you could wrangle a taxi for less than 50 bucks and still break even with the cost of the cruise tour (though I don’t know why you would want to when the bus was the easiest thing ever to happen to your vacation).

Takeaway lesson of the day: Be adventurous. Skip the ship’s tour. Have fun. DIY your own tour. Above all, be back to the ship in time. 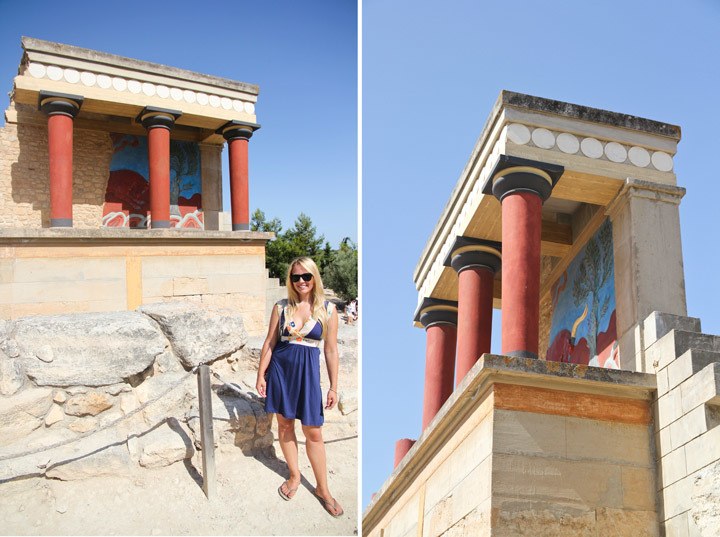 Diving in Greece: Submerged in Santorini