By the time you read this, I’ll be impatiently waiting in line at immigration in London, clutching the passport I’m so excited to put back into play after four and a half months stateside. This trip kind of crept up on me, and while I’ve dropped hints about where I’m headed I haven’t given you a proper travel plans update since my rough sketch of how I imagined 2014 would shake out. You guys know that Europe is far from my usual playground, but somehow this summer just kind of… happened. Now that things are finalized, here’s where I’ll be hanging. 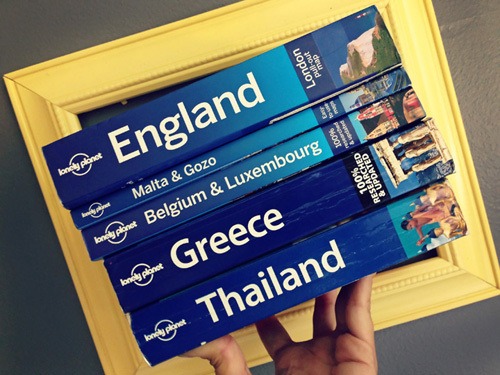 With so many close friends having returned or relocated to London, I swing through any and every chance I get. In the past I’ve confessed that it’s not my favorite city, but I’m surprised by how pumped I am for my third visit. My week here will basically be one non-stop sleepover party with my various girlfriends, with frequent supply runs for Rekorderlig cider and bacon butties from Gregg’s (don’t judge). 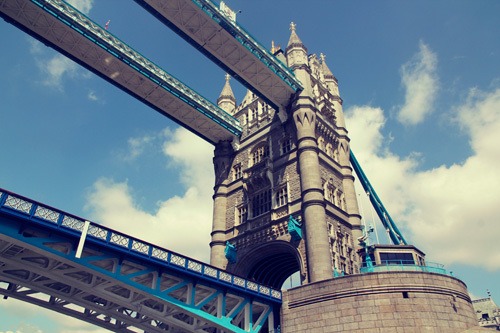 Within minutes of Anders accepting his dive instructor position in Malta I was online looking up flights. I purposely have kept my itinerary loose to be able to take advantage of any time off Anders might have (which sadly at the moment is looking like a whopping total of zero days) and haven’t had much time to crack open my guidebook. But lack of planning aside, I am seriously looking forward to a week of Mediterranean sun and exploring a brand new country that I quite frankly didn’t know existed this time last year. (Um, hey, European geography is hard.) 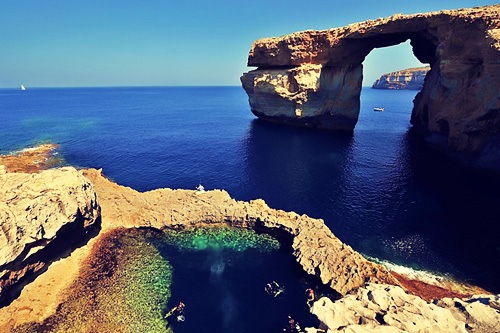 Ah, Belgium, the country that launched this whole crazy trip (crazy in the sense that my bank account is laughing at me in a really manically cruel way right now just thinking about it). As soon as I saw one of the infamous Tomorrowland aftermovies, I knew there was no way I could continue through life without attending this wild festival out in the middle of nowhere Belgium. Landing tickets to one of the most lusted-after music events in the world was no easy feat, but I’ll save that story for rave o’clock. In the meantime, go watch that aftermovie. Seriously.

In addition to the four days my partner in crime Heather and I will be spending in Boom — actual town name — for the festival, I’ll be spending four nights based in Brussels experiencing some of the best Belgium has to offer with unique accommodation (a Pantone-inspired hotel, anyone?) and Viator tours exploring Brussel’s gourmet chocolate making scene and the quaint city of Bruges. This will be another new country for me — this one I totally knew about, though, I swear. 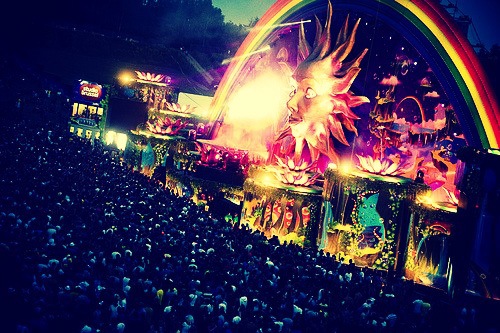 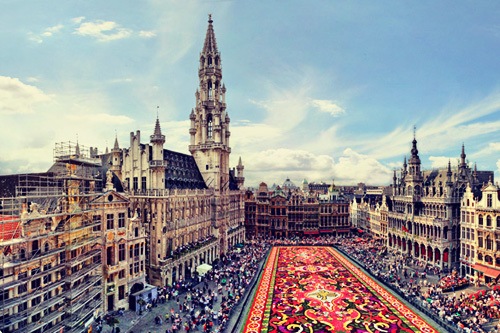 Last But Not Least: Greece

I have been itching to return to Greece ever since I cruised through with my momma in 2011 and got a hint firsthand of what all the fuss is about. So when Heather realized she could swing another week of travel post-Tomorrowland, we used Skyscanner’s Everywhere Search and discovered super cheap flights to Athens, and we were sold. We’ll spend the week doing the live-like-a-stylish-local thing with apartment rentals with Hara’s Houses in Santorini and Flipkey in Athens. I think it goes without saying that my heart almost explodes with happiness thinking about this.

After bidding goodbye to my temporary travel buddy I’ll be taking off on what to me is a serious adventure — attempting group travel. I rarely if ever travel in groups (basically just when it’s necessary, like in the Amazon or on the Inca Trail), and I admit I’m nervous about how this independent traveler will take to not being in charge all the time. But you know what? When Heather and I were trying to figure out the ferry schedules, and when I was trying to look into affordable accommodation for a solo traveler in peak season, my brain almost short circuited in protest. It felt pretty darn good to hand the reigns over to Contiki for their Greek Island Hopping itinerary and to Viator for their short but sweet jaunt to the cliff top monasteries of Meteora. All in all, I feel like a pretty lucky girl to be heading to Greece for such a luxurious amount of time. 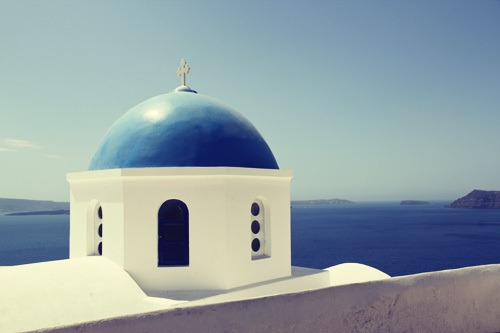 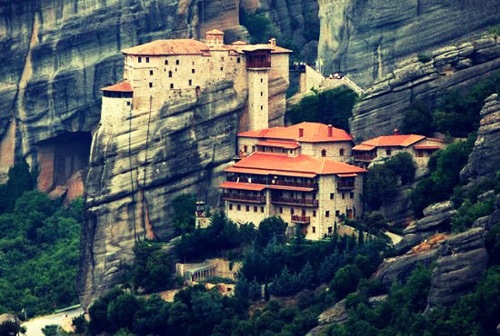 And Beyond: Back to Southeast Asia

After 6.5 weeks in Europe, the CFO of Alex in Wanderland has put her foot down and demanded a return to a more affordable destination. Oh, hey, what do you know! The CFO is me. So from Greece I’ll be flying onward to Thailand, with a 24 hour layover in Bahrain en route. (Note to self: figure out what the heck to do in Bahrain.) Once in Southeast Asia I plan to spend about three months settled down somewhere living the good life and catching my breath after a super fast-paced summer. I think it will be the perfect way to wind down and balance out the year.

So, about those euros…

Let’s start with the good news! All those one-way flights from New York to Santorini cost me less than $1,000. I snagged New York to London for $415, London to Malta for $137, Malta to Brussels for $186, and Brussels to Athens for $206 — including all baggage fees. And while the flight to London does admittedly involve an inconveniently long layover in Iceland, all the rest are direct and on decent airlines. On top of that, I snagged a totally free flight from Athens to Santorini — worth $134 — thanks to my Capital One Purchase Eraser. So in total, I’m hitting four countries in Europe in peak season for a total of $943.

How did I do it? Well, I booked almost five months ahead, which of course sacrifices some flexibility. Yet it’s really your best bet for scoring a deal — according to an article I gleefully ripped out of Travel and Leisure magazine, The Airlines Reporting Corporation found that the lowest summer fares to Europe are offered a full 31 weeks before departure.

I also went a little off the rails with Excel. I knew loosely where I wanted to go but I was pretty flexible on the order of my itinerary and the exact travel dates. So I made a spreadsheet of my itinerary options and I used Kayak and Skyscanner to check those various routes for basically all of July. I noted the routes that only ran direct a few times a week and the dates that were significantly cheaper than others. I was careful to check the airline’s policies on baggage and add those fees into my Excel as well. Then I just let the numbers decide. London was by far the cheapest entry point into Europe so I made that my first stop by default. From there I built my itinerary around the lowest fares I could find. Boom. Itinerary built and flights booked (we’ll just skip over all the tears and hand wringing in the middle.)

Yet while everyone keeps telling me what a killer deal I got, I am still bracing myself for the most expensive months of my travels ever, thanks to a lot of airtime and a seriously pricey festival ticket. While I am lucky to be working from the road and taking advantage of both personal and professional connections throughout this trip, there’s still little chance I won’t end up dipping into my savings. It’s peak season. In Europe. I’m trying to embrace that fact now and remind myself that I’ve been working and saving up hard for this, so that it won’t nag at me along the way and I can just enjoy the indulgence.

So now that you know where I’m headed and what I’m up to, I want to hear from you! Is there a ouzo bar I must know about in Oia? A beach I can’t miss near Buġibba? A first timer festival tip I have to hear? Has anyone had any fabulous group travel experiences they want to reassure me with? Bring on the heavily solicited travel advice — I’m so looking forward to reading it in the comments. And hey — let me know what you all are up to this summer too!

I still have some US travel stories to share (including my heart-filled return to Hawaii!) before I start posting about my current European odyssey, but you can always follow along in real time on Facebook and Instagram! I can’t wait to share this new adventure with you.

Let’s do this! Summer in Europe, here I come…

Image of Malta via National Geographic and edited by me, image of Tomorrowland via Tattoo Donkey, image of Brussels via Flickr and edited by me, and image of Meteora via Achtypis and edited by me. My trips with Contiki and Viator and my stays with Hostelworld, Hara’s Houses and Flipkey are being provided in exchange for media coverage. As always, you will receive my honest opinions regardless of who is footing the bill.