Forty years ago this summer, my maternal Grandmother traveled from her home town of Decatur, Illinois, to explore the islands of Greece. The year was 1971 and she had lost her husband the winter before. She traveled with two couples, and took a very similar route to the one that my Mom and I (her daughter and granddaughter) took this summer.

As I was planning my own trip and found out about the one my Grandma had taken, I immediately asked her to send me photos. “They aren’t like the pictures you take today,” she protested, but sent them anyway. She’s right. They were better. Full of life and texture, I hatched the idea that I wanted to re-create them.

Its hard to describe how fun this was. To be traveling and doing something creative, with a dash of detective work and a bit of family and history thrown in for good measure; it was amazing. What follows are the results, and the stories behind them.

The first photo we tried to recreate was simply labeled “Athens.” We could tell from the angle of the Acropolis in the background that it was taken from a hill, and by looking at a map of the Parthenon we determined in which direction. The problem was that there were two hills next to each other, and as we decided to leave this to our final morning in Athens, we only had time to hike one.

Luckily, we guessed correctly. The walk up Philopappou Hill was lovely, and we were thrilled when we found the same bench and cobbled stone viewpoint that my Grandmother had sat at years before. 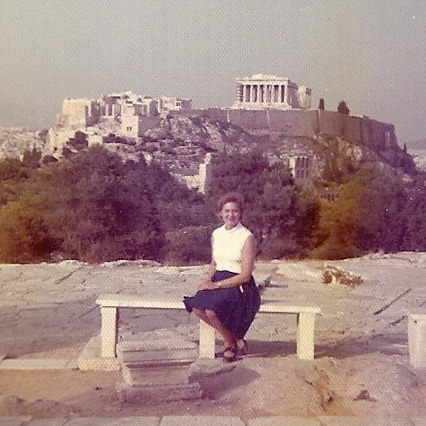 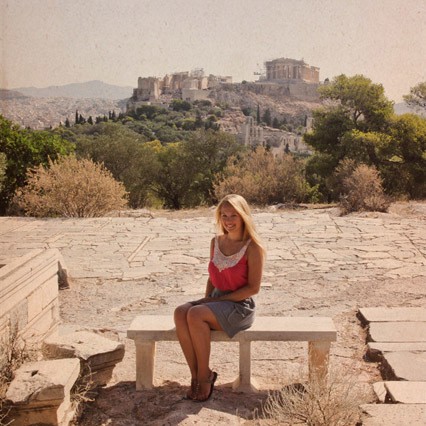 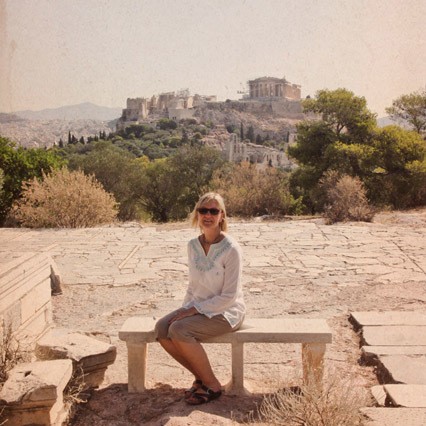 The hardest part of this one was getting the angle right. The tiniest movement of the camera can make the photo look completely different. Notice how much clearer the Acropolis was from that view 40 years ago? Air pollution seems to have taken its toll. These photos are my favorite of the bunch.

This location took very little detective work to find. However, it seems they don’t just let people hang around and sit on columns of the Parthenon anymore (weird). The real challenge here came from the fact that we had to get both of us in the shot to recreate the two-person pose, which meant handing over the camera to others. We probably asked 3-4 different people, and even still the results are sub-par. 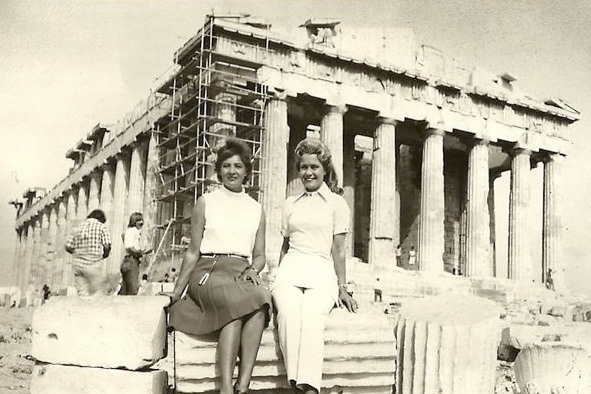 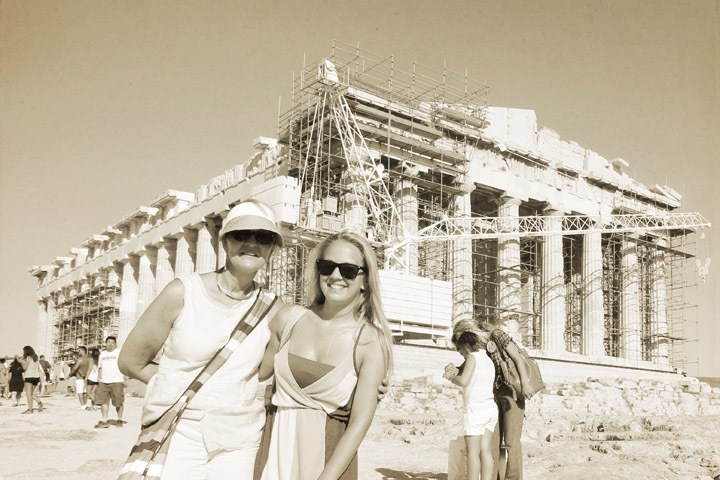 I still love the original photo though, and I love that there is scaffolding in the same place, 40 years later.

This one was a real challenge. When we first got off the boat, the pier was deserted, but we were itching to get going to Oia. When we returned to meet our sunset boat ride, the pier was flooded with thousands of people who had just disembarked from another ship. While my mom protested we would never get to the front in time, I stubbornly stood in the line for donkey rides.

The only problem was, I didn’t really want to ride one. I was too unsure about the treatment of the animals and plus, we didn’t have time. The heat, crowds, and slow moving line were making people a bit cranky but that was nothing compared to the massive fight that broke out between the donkey handlers. I’ve never wanted to speak Greek more! I was ready for everyone to bite my head off when I said I just wanted a photo, but it all went pretty smoothly. Other than the guy refusing to remove his arm. Arghhhhh. We snapped the photo and made it to our sunset cruise with moments to spare. 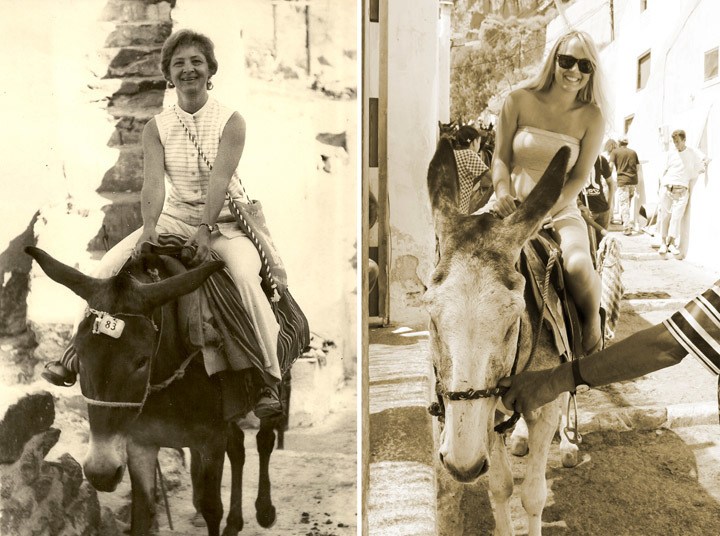 From what I had read about Rhodes, I suspected this shot was from the Old Town. When we got our hands on a detailed map, I spotted two fountains in open spaces. I was thrilled when we found the second one and it was the one in the photo! The big challenge here was trying to get people out of direct line of the shot. 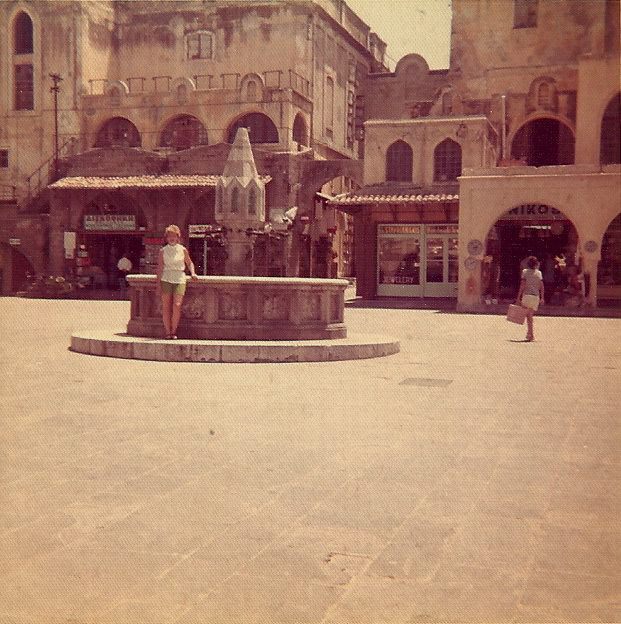 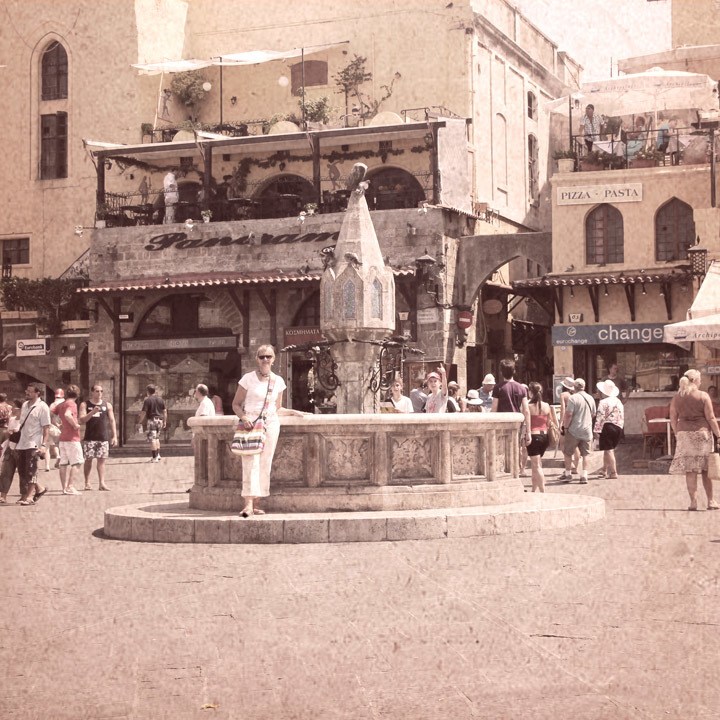 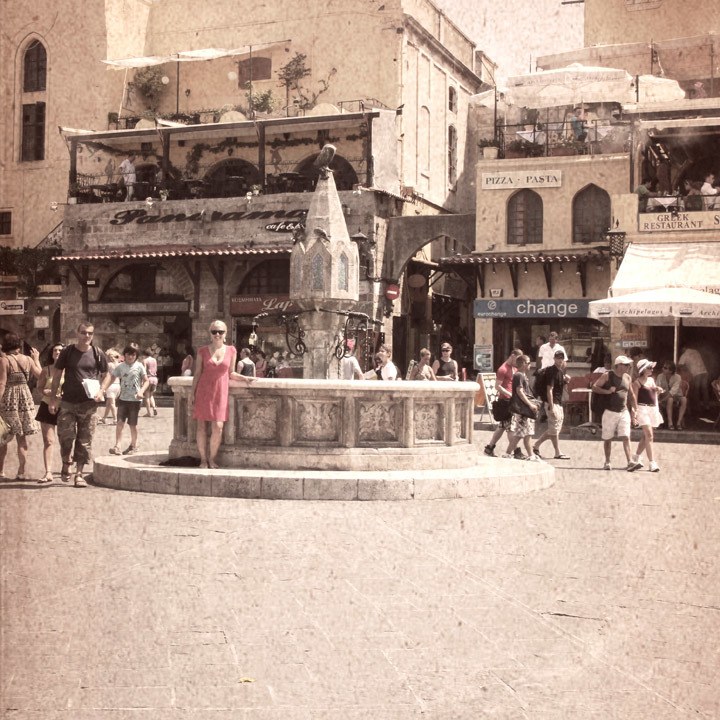 Even if you take away the crowds, its amazing to see the effects of tourism on this little snippet of the world. New awnings, more signage, building additions- Rhodes Old Town has clearly changed in 40 years! Imagine if it wasn’t a UNESCO World Heritage Sight with some protection…

There were other photos in the collection that we were unable to recreate, either because we weren’t going to the place they were taken or we were totally clueless as to where the heck that was. Others, my Gram was behind the camera in front of it. But I love them so much I wanted to share them here. 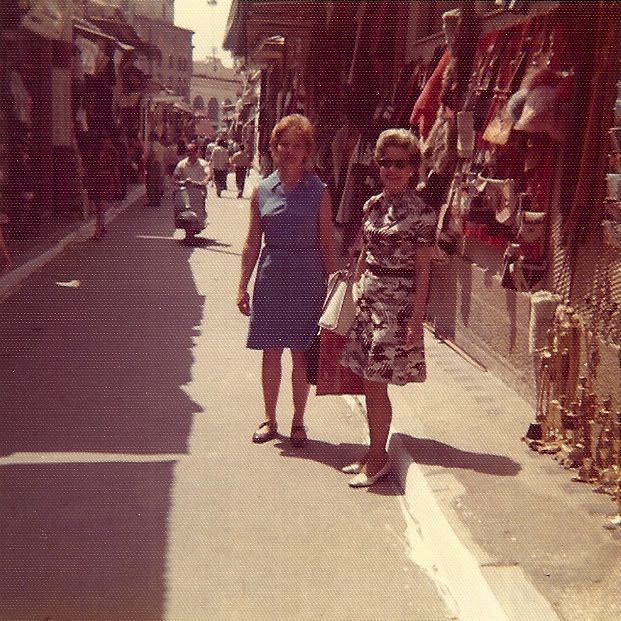 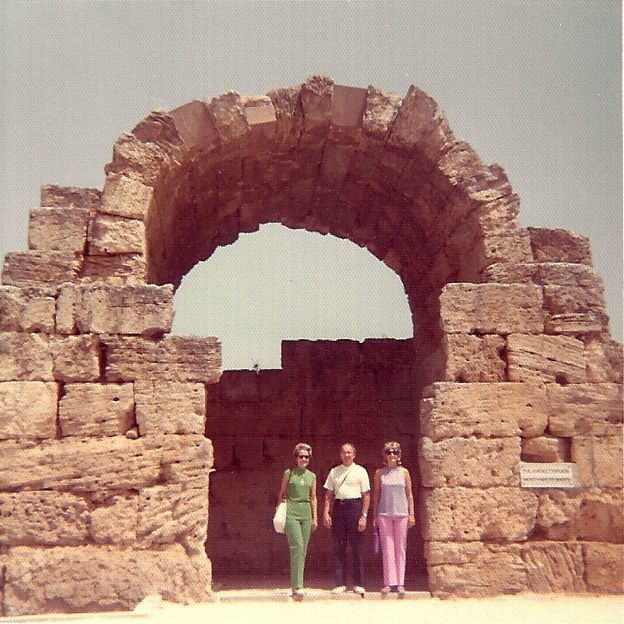 I absolutely love this next shot. What an eye! 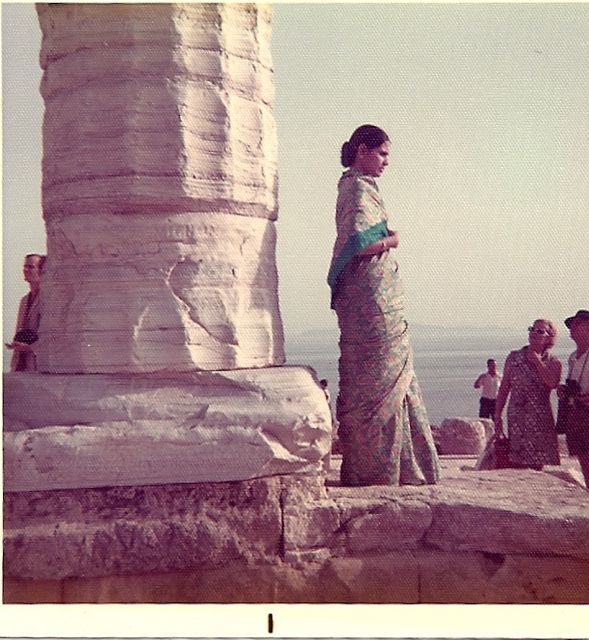 And two more of my beautiful, smiling Grandma. 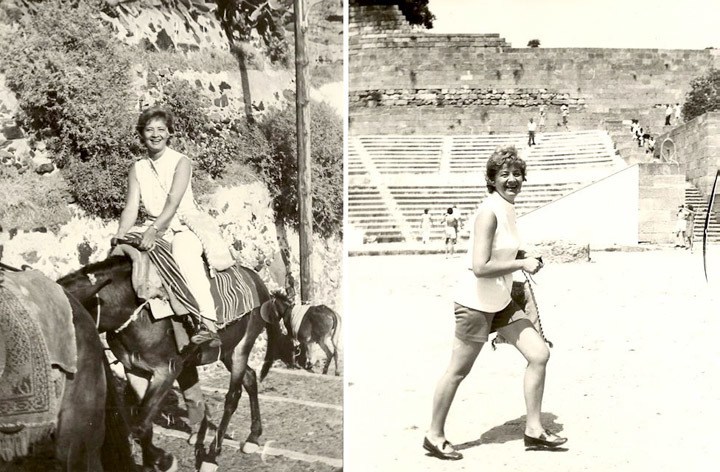 My grandma has always been one of my biggest cheerleaders. Whether it’s a new art project or a crazy adventure, she’s still listening to me blab about it hours later when everyone else has slipped into a boredom coma. So it was so much fun to be able to combine travel and art in this fun surprise for her.

Falling For Far Out Beach Club

Seven Reasons Small Ship Cruises Are The Right Fit For Me Photo of the Week 16
32 Comments...