On Envy and Consumerism and Sunglasses

Usually I make an effort to put out pretty polished content with good stories, complete thoughts, and neat little endings. This will not be one of those posts. I’m just going to ramble here for a few hundred words about some personal observations and moral dilemmas, okay? It’s vaguely travel related, I swear.

I have always struggled with a lust for material things. And one of the things I have loved about long-term travel and living as an expat is that my irrational desire for these things disappears when I am fulfilled by other things and removed from a situation (basically, living in New York) where I am bombarded by the material world and all my complicated emotions surrounding it. I used to spend a lot of time feeling envious of those who seemed to have more than me (in a material/monetary sense), frustrated that I didn’t have the same, and then on top of it all, guilty, because really I did have more than anyone could ever need. Travel, and the perspective I gained from it, freed me from those emotions.

The commenter accused me of having issues if material goods were a cause for jealousy or concern for me. Uh, busted? In my defense, anyone who travels through vastly different economic regions of the world is going to spend time thinking about their own relationship with stuff and money and the culture attitudes towards those things in the country they come from. But let’s be real, it is a personality flaw: I struggle with envy and materialism, and a general obsession with how I and other people spend money.

Back in December when my friend Zoe came to visit me in Thailand we had a conversation on the beach that really stuck with me. I told her I felt at peace with living with less and with my current financial situation — and it was true. Jealousy was almost completely absent from my life.

In Koh Tao there was no clubs with a hipness-quota, no designer labels that required a black AMEX, and no concern over social strata. In Koh Tao, all expats and travelers were on a pretty even plane. We all shared a desire for a life rich with adventure. Most of us had traveled through areas of deep poverty but also communities that made us rethink the baseline of stuff and money necessary for happiness — we had perspective. Few of us had much more than we could carry on their backs.

Of course there is the low cost of living — I could afford anything I wanted, because everything was so darn cheap. I made a modest living and yet if I so desired, I could eat at the most “expensive” restaurant on the island, work out at the “fanciest” gym. If I wanted to do a bit of traveling, I could go on a weekend to Koh Pha Ngan and not think twice. The act of saying “no” to things I couldn’t afford, which was an almost daily occurrence back in New York, was now quite rare.

But there was another element at play. Yes, I could afford almost anything I wanted – but suddenly, I didn’t want much. Who would want to go spend the day shopping when there’s a beautiful beach calling, and the shopping is crap on an island anyway? Who would want to eat at some fancy restaurant when the shack around the corner serves the best massaman curry? And why would I want to buy any material things when I was just going to have to physically strap them to my back and move them at some point? It was organic minimalism, and I loved it.

So then I was back in New York City after a year away from home, a year spent living this life lavish in adventures but modest in things and money. I found myself in Bergdorf Goodman’s meeting a friend who works there and as I was waiting for the elevator I glanced over to a display case and laid eyes on an pair of sunglasses. This pair of sunglasses cost eight.hundred.dollars. I felt my stomach squeeze.

Later, as I tend to do, I began to overanalyze that feeling. I brought the incident up with my friend Chris, who works on Wall Street and is one of the sharpest people I know. He was like, “What do you want to do, put some kind of cap on what people can spend on sunglasses? Be some kind of sunglasses socialist?” And no, it’s not like I need everyone to wear the same $5 Chinatown/Khao San Road cheapies that I rock. I think if I made it big time some day and was a more responsible person who didn’t sit on my belongings all the time I might even go crazy and buy a real pair of Ray Bans…. for $150.

So I guess $150 is my all time personal ethical sunglasses price cap. Ha. But $800 for one pair of sunglasses? I just came from a country where the average per capita income is $1050, so yes, it upsets me to think people spend 76% of that on a pair of sunnies. (Though, apparently, not 14%). I guess the perspective I gained from traveling and seeing how little people really need has made me sensitive to obscene levels of wealth and spending that are on show in places like New York. But how much is enough, and how much is gluttonous? It’s a gray, murky line.

Of course on another level, who am I to judge how a successful person spends their money, and on yet another level, aren’t I lucky that I can entertain the idea of someday buying expensive sunglasses myself, and by the way I am so jealous of people with multiple pairs of Ray Bans, and on that note how dare I be envious of anyone about anything when I have been so spectacularly blessed with a privileged upbringing. Picture me saying that without taking a breath and then passing out.

I was back in New York for a week, and all those old complicated feelings of disgust and resentment and guilt and envy over physical things were back. I had hoped those feelings would stay away, that the way I felt in Thailand wasn’t some temporary, situational high but a new state of mind for me. Maybe my zen-minimalist-happiness and freedom from all those nasty emotions is only possible when I am far far away, on a beach in the middle of the Gulf of Thailand. Or maybe someday I’ll get to the point where I can feel that freedom anywhere, anyplace. To get there perhaps I just need to work a little harder to not get worked up about sunglasses and what other people have and all the temptation to indulge in the things I want but don’t need.

I guess what I’m trying to say here is that life is complicated and I haven’t quite figured it out yet. I do know one thing: I am happier when life is simpler. 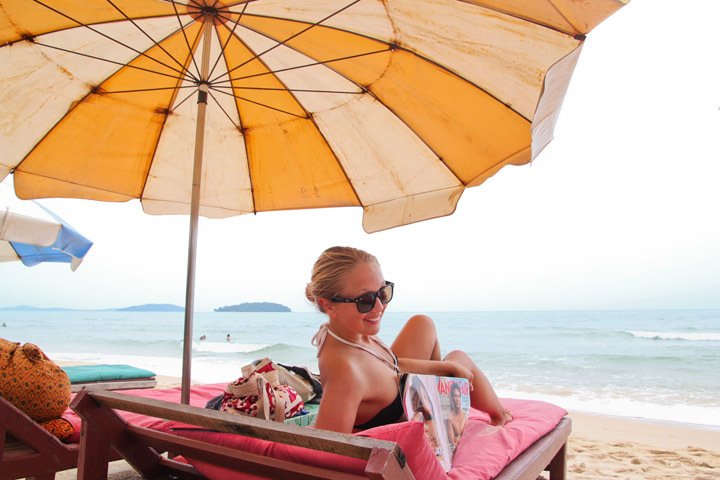 What do you guys think? Tell me I’m not the only person who agonizes over this stuff.

* My mom tells me this last photo makes me look like I am, quote, “at the Boca Raton Beach Club!” I would like to state for the record that I was not at the Boca Raton Beach Club, but perched upon a free beach chair in Cambodia, thus qualifying the photo to be in a post about simplicity and resisting gluttony. I was fresh out of photos of myself eating out of the garbage. And that was totally someone else’s Vanity Fair.

TBEX’12: A Weekend of Inspiration and Altitude Photo of the Week 62
47 Comments...