It was still dark outside when the dive boat pulled away from the pier. I was shooting for New Way Diving, first ones to the dive site, a policy I curse them for en route to my 5:45am call time. We had just reached Chumphon Pinnacle and I was halfway through setting up my gear when I heard a primal scream coming from one of the first divers in the water. Instinctively, my heart sank, not knowing the source of the panic.

Then, a more clear call: “Whale shark, underneath you!”

I looked over at the students I was meant to film, still fumbling for their tanks. “I’ll see you in the water!” I cried out to their instructor as I jumped off the side of the boat. I looked around frantically and for a moment I thought I’d missed my chance. Then, emerging out of the blue, I saw it. And I understood that scream. While they may be gentle giants, they are still giants, and even this one, one the smaller side, was larger than any living thing I had ever seen. But it had an even bigger presence, and I felt myself tearing up in my mask. 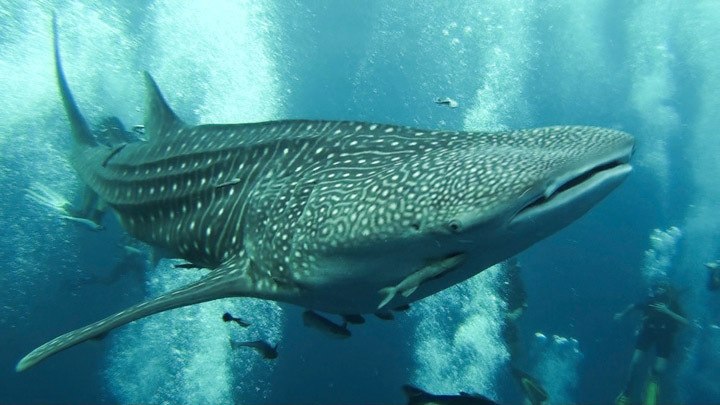 For many divers, swimming with a whale shark is the pinnacle underwater experience. They are mysterious creatures, with little being known about their migration, mating, and lives. Part of our reasoning for traveling to Utila last year was it’s status as a whale shark hotspot, along with Mexico, Belize, Madagascar, Philippines, and of course, Koh Tao. Many divers go years without spotting one, as it is all about being in the right place at the right time.

The high I felt at being underwater and being paid to film this animal was overwhelming. I took back all my negative thoughts towards New Way as I was gifted with time in the water with the whale shark and just 10 or so other divers. By the time the dive was over and the word had spread to other boats, there were at least 100+ divers in the water.

I was so shaken by my emotions at my first whale shark sighting that my footage isn’t as daring as it could be. But even my flustered handiwork couldn’t stop this video from being a must-watch. I edited the full movie for students down to a 3 minute clip and have posted it here with permission from the company I was filming for, Fat Fish Movies. In between whale shark clips there is other footage from the dive including massive schools of barracuda and batfish.

I’ll never forget that day, that feeling, that moment.

Learning to Drive In Thailand Photo of the Week 18
25 Comments...