The time had come: my Dad was soon arriving in Bangkok so we could start our journey to Cambodia. While I thought when my time at the clinic was up I might head to Koh Phangan, or maybe up to northern Thailand, I ended up staying in Koh Tao until the night before I was due in Bangkok! It was a potent mix of things that kept me there.  Namely, the island and the people- and one certain person in particular.

Koh Tao is a curious place. It’s an island in Thailand that to most casual visitors is not really very Thai. There’s one dingy wat, the workers are mainly Burmese, and only about half the restaurants feature Thai cuisine.  But there’s something else about it. It’s a little microcosm for backpackers, divers, and other people doing an excellent job putting off real life, and it has a way of sucking people in and making you feel like you could make a life there. Granted, I’m no travel Olympian (yet!) but I can say I’ve never been another place like it. Writing this, my heart aches for Koh Tao.

And there’s one other teensy detail. 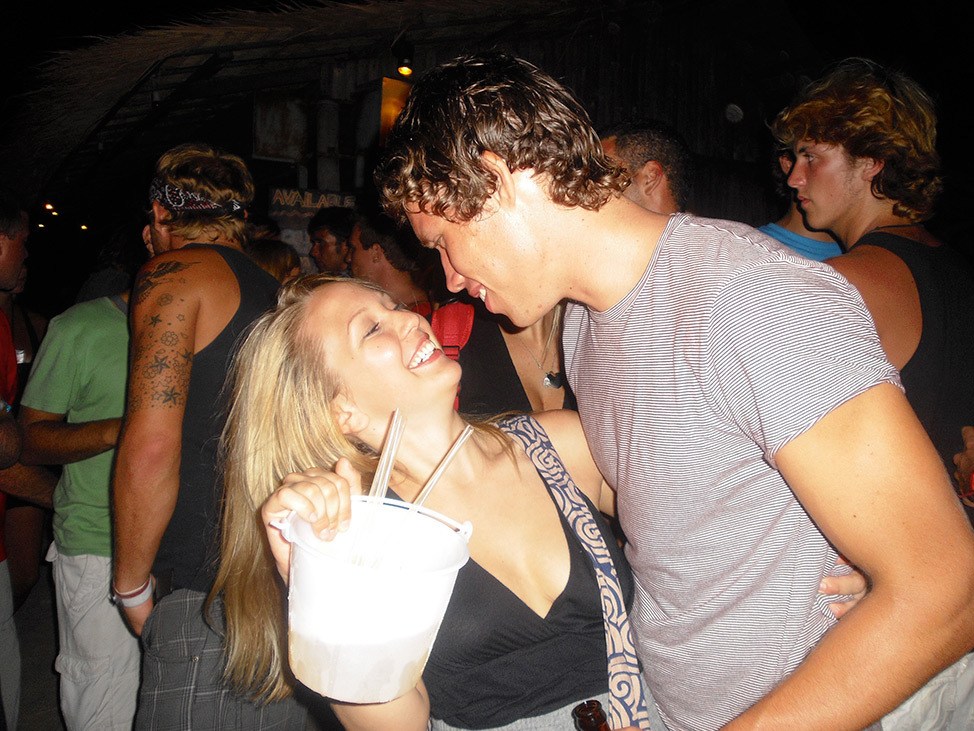 Our first photo together – classy

I love telling people about how I met Mark at a beach bar on a small island off the coast of Thailand. He thought I was an airheaded American, another silly girl trying to see the world via a well trodden path of backpacker hotspots in cheap foreign countries labeled as exotic. I thought he was, well, I didn’t think much as I couldn’t understand a word of what he said through his thick Scottish accent. I was thrilled to check of the “foreign love affair” on my list of to-dos. It was my third night in Asia.

One thing you should know is that I’m blogging this at a later date, giving me the great gift of perspective. While I almost wish I had kept up writing as I was traveling, I know that I never would have been bold enough to write about Mark anyway. At the time I was still telling myself he was a summer fling that I may or may not friend on Facebook upon return to my real life. Even if it had been, I still believe I would look back on my three weeks with Mark with incredible happiness and nostalgia. From the night we met we were magnets, going swimming in the bay where he worked, staying up all night in talking in the hammock on his porch, driving around the island on his little motorbike. All in all acting out the opening montage to a bad lifetime movie romance novel adaptation.

Around the end of my second week in Koh Tao, the night of the Clinic Fundraiser, Mark asked me to come back after Cambodia. There were some hurdles standing in our way, including a messy personal situation on his end, and a return ticket and a job at home on my end. But a week later as we said goodbye at the ferry terminal, I didn’t shed a single tear. My parents and the airline may not have known it yet, but there was no way I was returning to JFK on July 10th. I was smitten, with an island, and a boy, and an adventure ahead of me.

Photo of the Week 84

The Beauty and Tradition of Thai Sky Lanterns