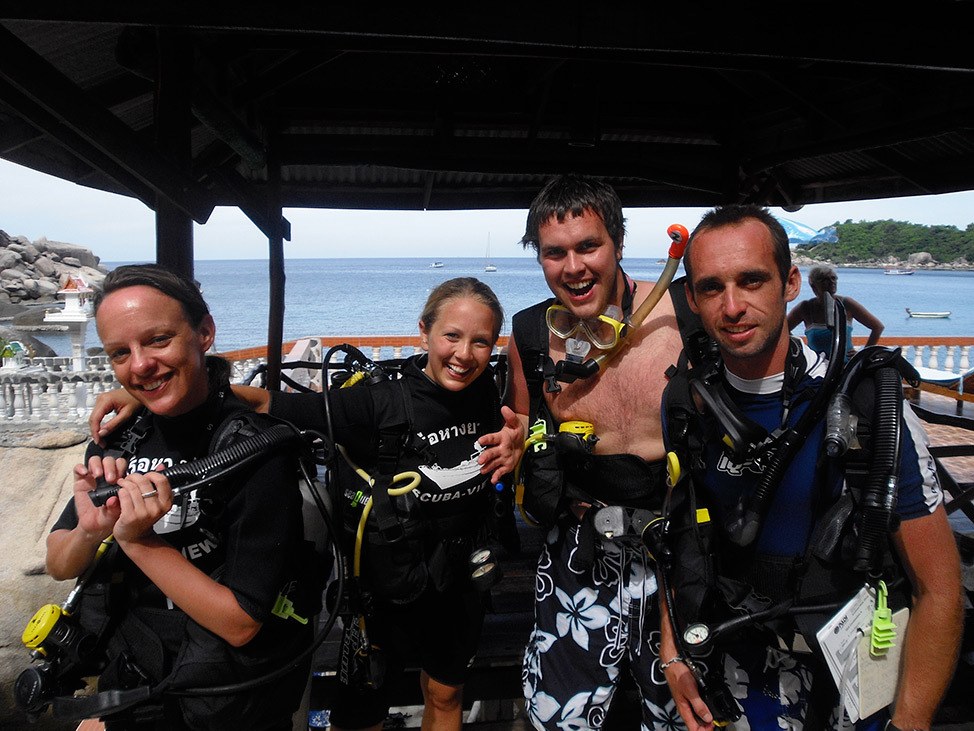 Scuba diving was not something I always dreamed of doing. In fact, it was something I would have been content to avoid for all the rest of my days, had I not ended up on Koh Tao. I’ve seen Jaws. I’ve seen Open Water. In fact, open water has long been my greatest fear. Which makes it so ironic that I ended up willingly handing over my hard earned money for a course known as Open Water Diver, the certification by dive center PADI that will allow me to dive down to 30 meters anywhere in the world. 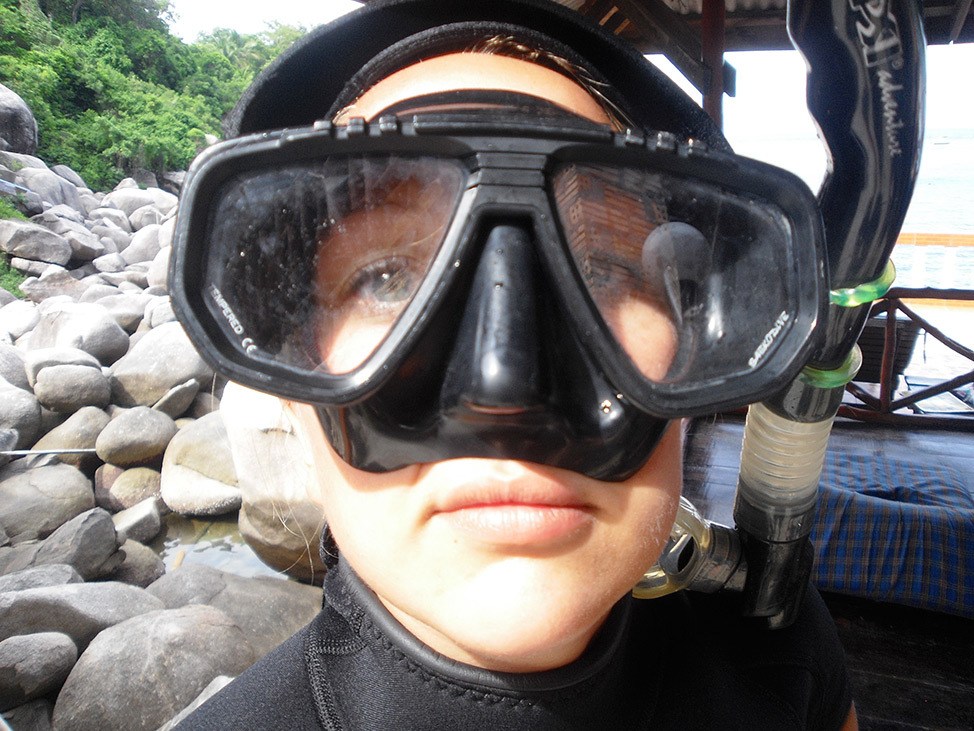 No wonder the fish swim away from us

The open water course consists of a combination of classroom learning, four confined water dives, and four open water dives. The emphasis is really on safety and learning by repetition so I spent a fair amount of time tapping my foot, wanting to get out and swim around with the fish. As far as classrooms go, however, you can’t get much more idyllic. I took my course at a small dive school on the far side of the island in Hin Wong Bay, a beautiful place where we did our classroom learning on open air pavilions over the cliffs and our confined water dives in the shallow bay.

Throughout the required skills, which included practicing emergency ascents and removing the breathing regulator, I really only had trouble with removing my mask. I must be more reliant on my sight than I expected, because as soon as I pulled my mask back to let it fill with water, I completely panicked and felt like I couldn’t breathe, and water was going in my nose, and I was in general dying. I tried to calm myself down before I attempted to put it back on and clear it, but still when I finally reopened my eyes my instructor, Neil, was looking at me with grave concern. I had a little pity party and underwater pout for myself while my two fellow water babies had their go at it, and later on after I calmed down I was able to redo the whole thing with ease. 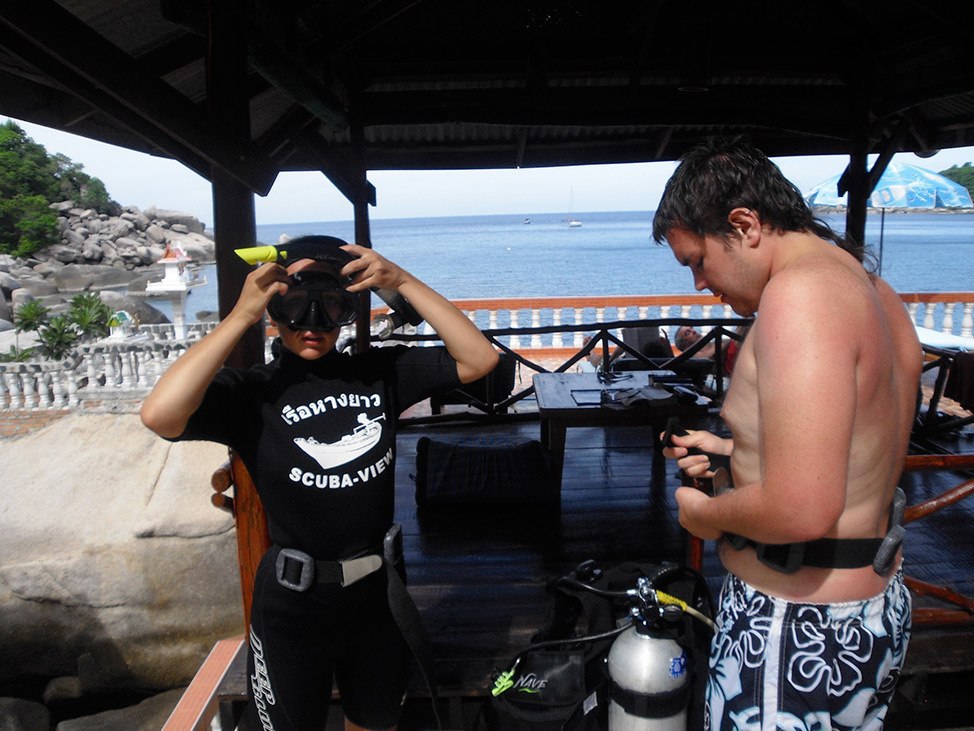 Being choked by my wetsuit

As we took the longtail out for the first open water boat dive, I was a little seasick so they put me in the water first. When I say that, I literally mean they “put me” in the water… held onto my air tank over the edge of the boat and dropped me in backwards. In that moment right before I dropped backwards into the abyss, I had the same sensation I always do at the top of a roller coaster before it drops… “What in the world have I gotten myself into?!” 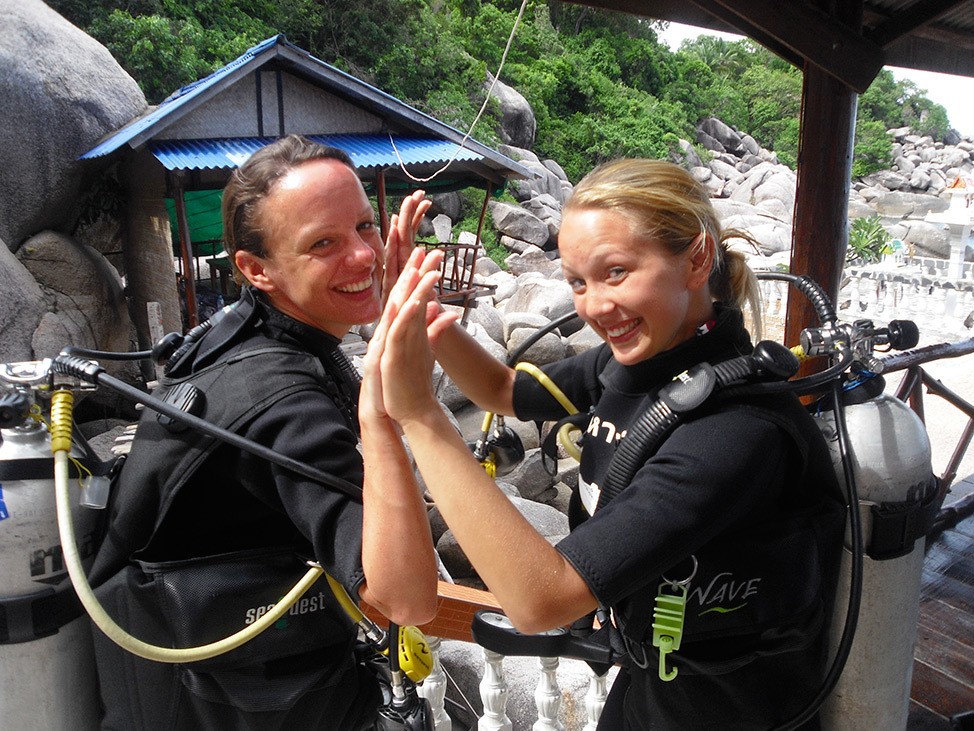 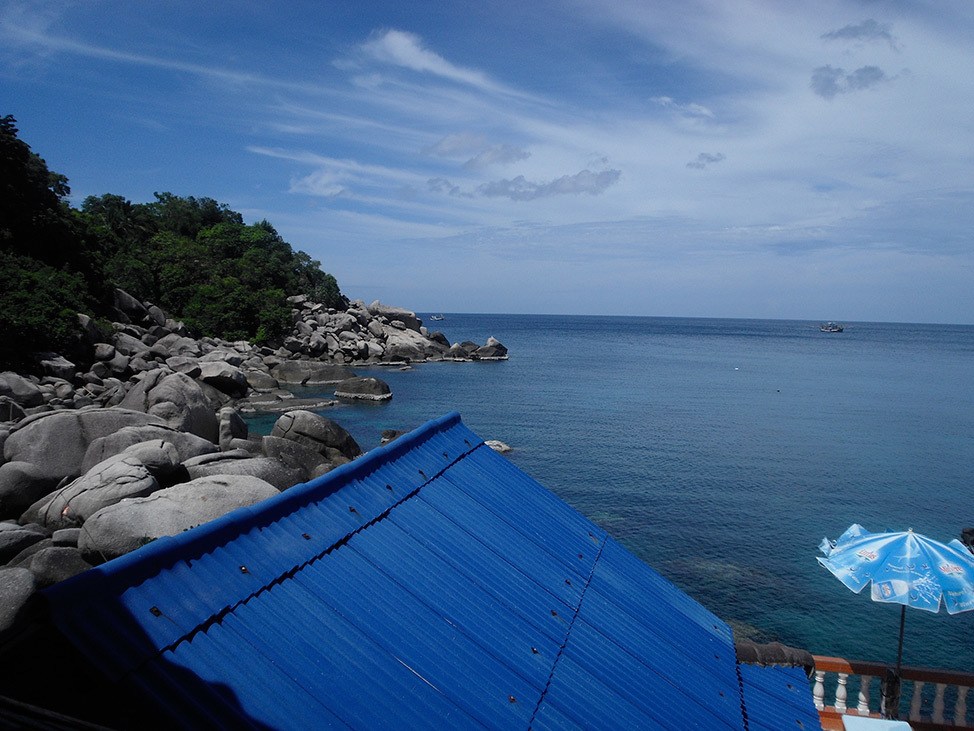 Once I was in the water, my sea sickness dissipated, along with my nerves. As we swam around the coral reefs, I felt like I was in The Life Aquatic, a whole little world I had never seen up close underwater. On that first dive I saw two eels and a little blue spotted ray, and I would go on to see pufferfish, scribble fish and more. Even more than the creatures, though, I was impressed by the coral. When I looked around it seemed like huge mountains pushed up all around me, creating an eerie and beautiful landscape. I often found myself staring a little too long at baby fish or pieces of soft coral blowing about, only to look up and kick like a madwoman to get back to our own little school of people-fish. 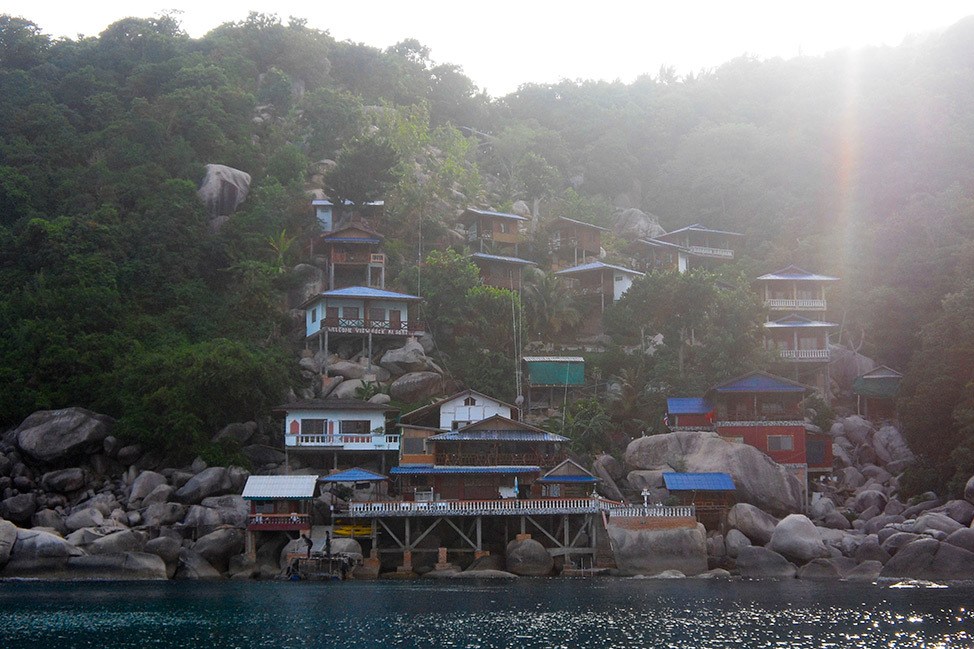 My favorite part of my entire underwater experience were the schools of big gray fish that hung out under the pier. There seemed to be hundreds, thousands of them, and there wasn’t really ever one fish. They moved as a unit, and swimming through them was like parting the sea. I’ve never felt anything like it. 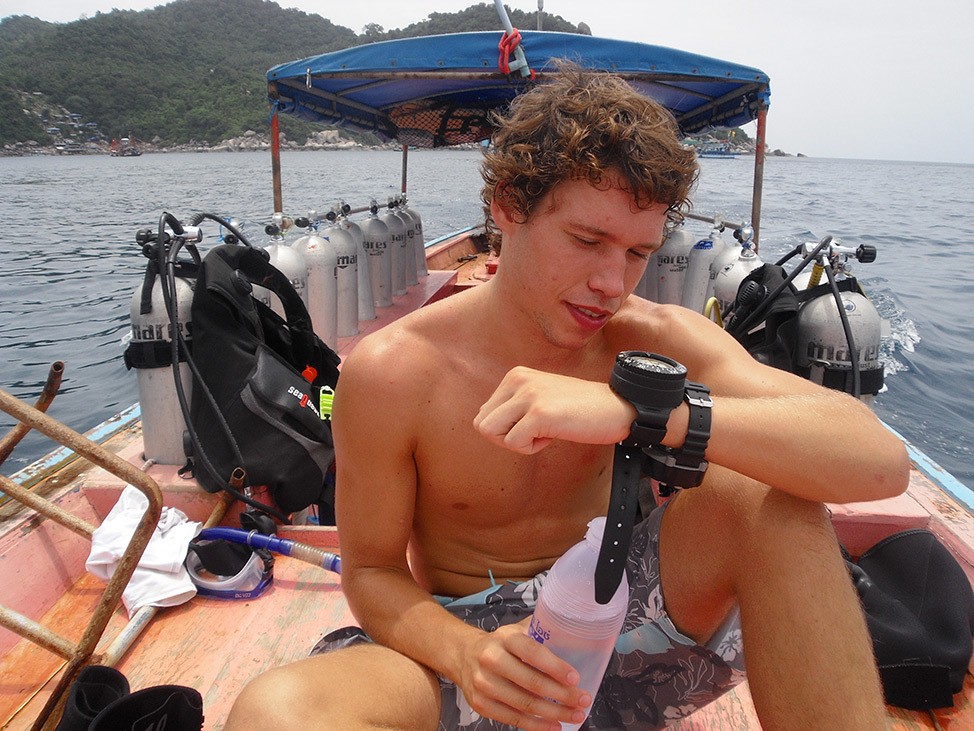 Overall, I couldn’t be happier that I decided to get certified. I learned something new, I expanded my opportunities for future travel, and I conquered one of my biggest fears. Now all thats left is spiders and empty parking garages at nighttime. I think I can live with those two. 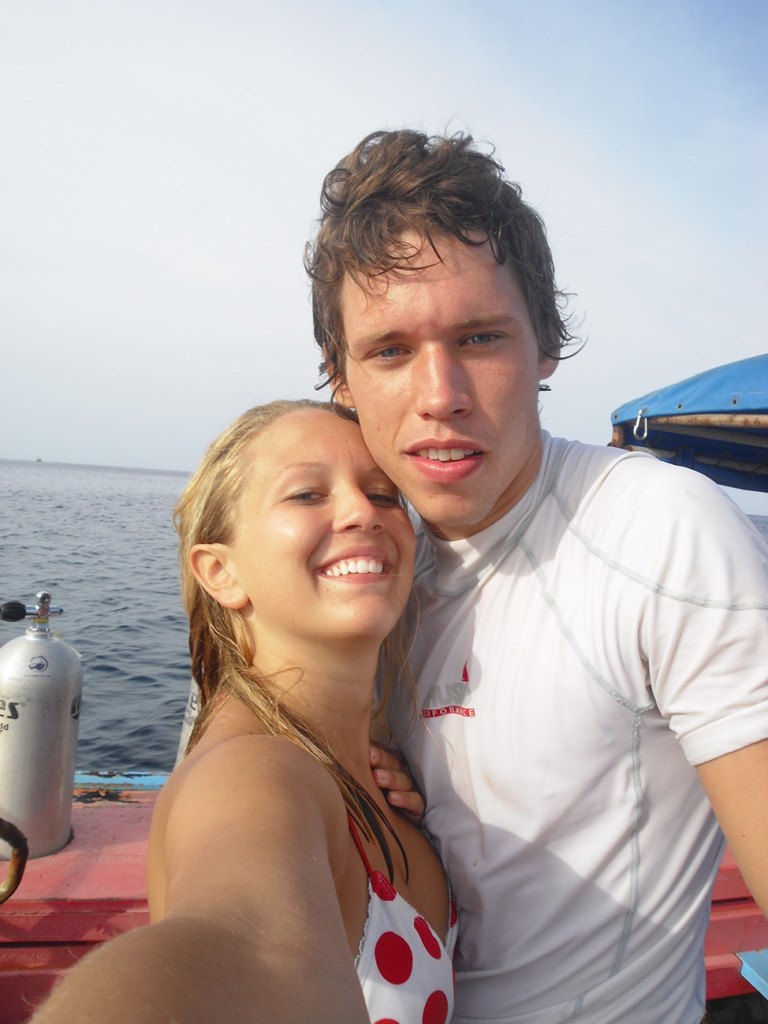 Instructor Mark and me

Note to future travelers: Choosing to learn to dive at View Rock was an unusual choice. Most tourists go with a larger dive school on the more populous west side of the island. I’m so glad I strayed from the norm on this one. I got to dive off a longtail, rather than a large boat, do my confined water dives in a bay, rather than a pool, and do my book work on a pavilion overlooking the sea, rather than a classroom.

Not to mention I learned in a group of three, a small number compared to what most people learn with on Koh Tao, and paid the bargain price of 8,000 baht, about $240USD. And I lost out on nothing! Your only “roadblock” is literally a roadblock: a bumpy unpaved pickup truck ride to the other side of the island (included in your course) and then walking down what I would estimate is 2.4 million steps down to the dive shop. Well worth it!

A Bangkok Birthday Bash at the Amari Watergate