Posted in Behind the Blog– New York– USA
34 comments

When I planned my visit home in March, I was extremely happy to realize that my visit would coincide with the New York Times Travel Show– an event that I thoroughly enjoyed last year. But what a difference twelve months makes! Last year I was still struggling to move my blog to a self-hosted site and decide on a blog name. This year I had business cards and a press pass. Shazam! 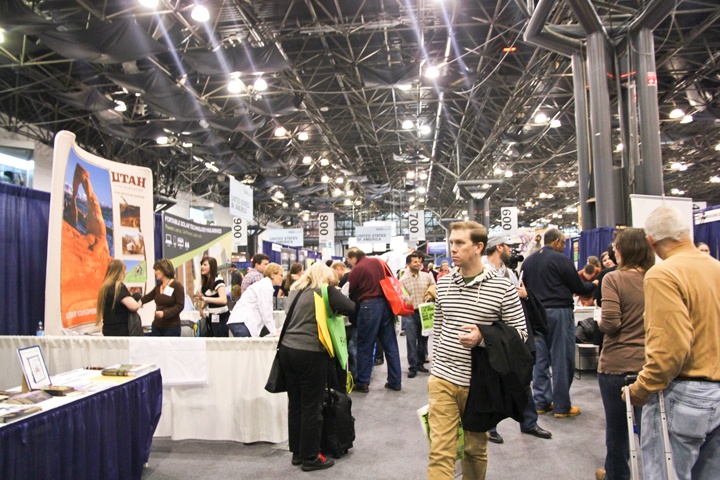 The event started on Friday with a schedule full of trade-only conferences. I managed to sneak into a packed session on the DIY Video Revolution by Robert Reid, a speaker I really enjoyed last year. Unfortunately I think I was a bit too frazzled by jetlag and general… frazzledness to really get the most out of Day 1 of the show.

The real fun began when the showroom floor closed with a blogger event sponsored by Expedia at the ultra-modern Yotel. There were delicious cocktails, new friends to be made (I met my future roommate for TBEX!) and lots of industry gossip to be heard. 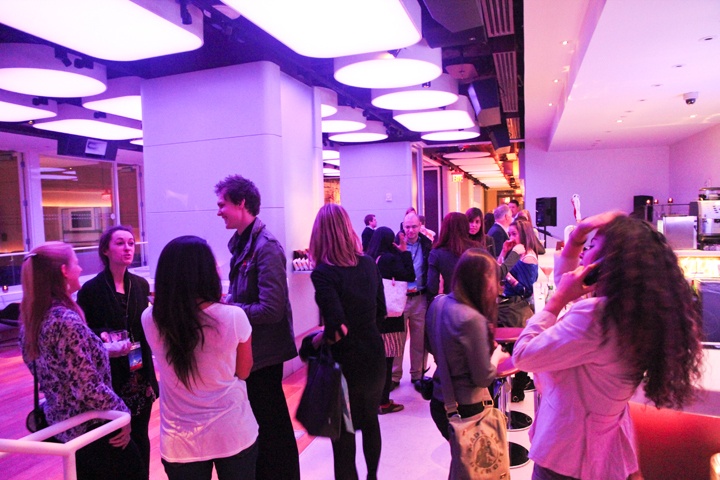 There was even a cute swag bag including two very blogger-friendly items such as a 4GB memory stick and a spare iPhone/iPod charger. 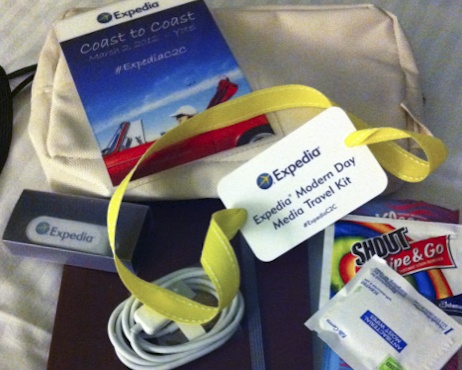 Stole this from another blogger and forgot who… Forgive me!

Afterwards there was yet another Travel Show meetup at Pony Bar. I made an excellent first impression on my many peers by falling asleep in my drink before stumbling into a cab backwards while mumbling an excuse about having flown across the globe a few short days prior. Dear everyone-I-met-that-night: I promise I am not usually so lame. Well, I said usually.

Saturday kicked off with a panel hosted by my former travel writing professor David Farley. It was titled Pre-Tripping and Planning Using Social Media, Blogs, & Reader-Reviewed Sites and featured panelists Josey Miller of Tripadvisor, Sean Carlson of Google Travel, and Rolf Potts, author. It was fairly basic stuff but the demographic of this show meant that the audience spent plenty of time interrupting with questions about how to spell “Twitter” and looking horrified when Rolf Potts suggested Couchsurfing as an alternative to hotels. One takeaway: The website Yapta helps you track flight prices before and after you buy a flight, and obtain a refund for the difference if the price drops. 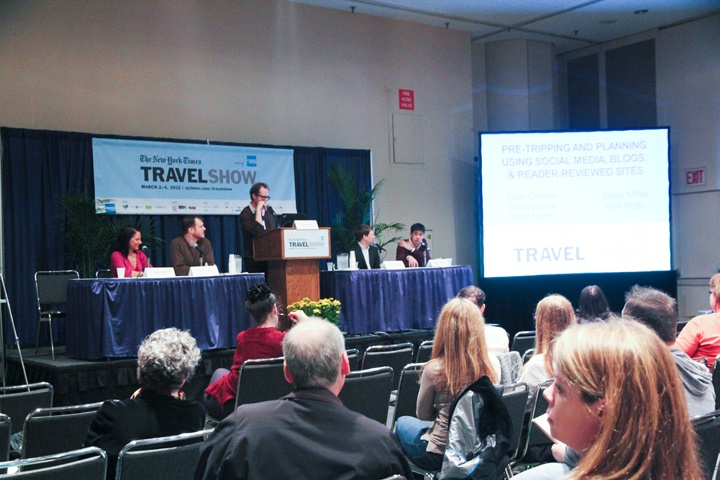 Next I hopped across the hall to a second panel, this time focusing on Travel and Technology: When It Helps and When It Doesn’t, and hosted by New York Times travel journalists. Again, most of the apps, websites and gadgets mentioned were fairly basic to someone who spends as much time talking travel as I do. But there was one fascinating discussion about the surprising value of travel agents which made the hour long talk well worthwhile. Takeaway: Seth Kugel did some investigating and found that shockingly (to me), in four different scenarios, travel agents found cheaper flight itineraries than online search engines did! As soon as I got home I looked up his article on the subject, which you can read here. 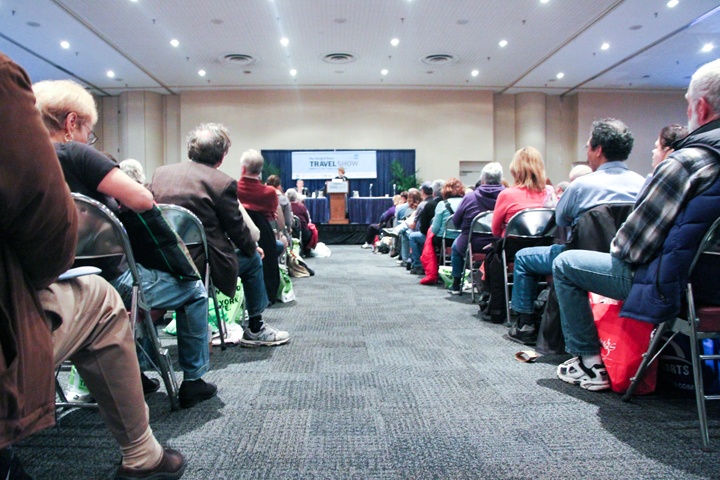 My final two sessions were standing room only, and presented by travel celebrities Samantha Brown of the Travel Channel and Arthur and Pauline Frommer of, uh, Frommers! Samantha was unbelievably entertaining and endearing and I was reminded that she was casted to her current job as an actress rather than a travel writer. I suppose for someone who is on camera so many days of the year it is important to be a performer! Pauline and Aurthur were very charming and gracious and once again showed their deep knowledge of the travel industry, however I must say I was disappointed in the quality of their presentation compared to the one they gave last year. Takeaway: Show up early for seminars that involve travel-world celebs. 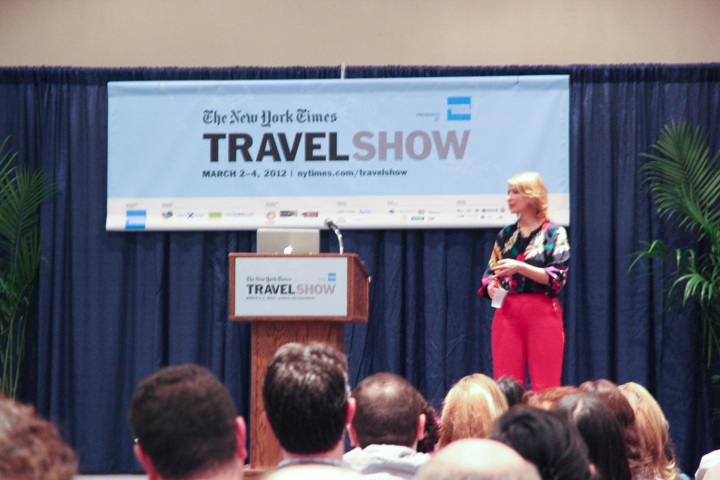 After all that knowledge, it was time to hit the show room floor! I enjoyed some delicious sticky rice from the Thailand booth… 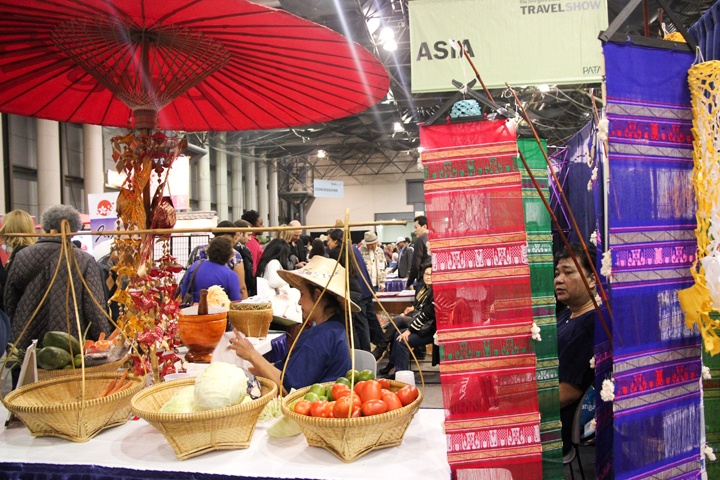 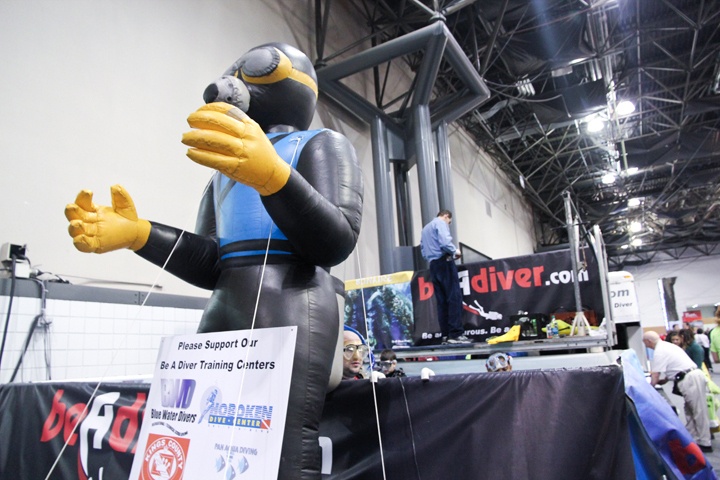 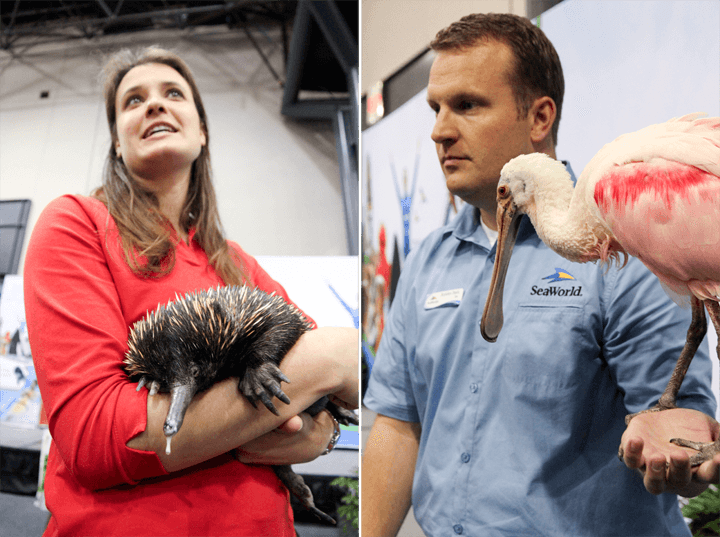 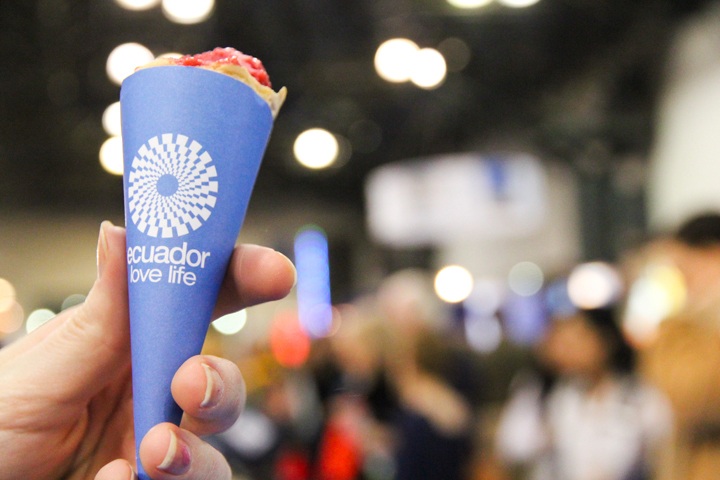 …and goofed around with my partner-in-crime Zoe. As with last year I enjoyed chatting with the friendly representatives of the countries I have been to and am planning on visiting soon, collecting as much food and swag as possible, and of course entering each and every contest and giveaway imaginable. 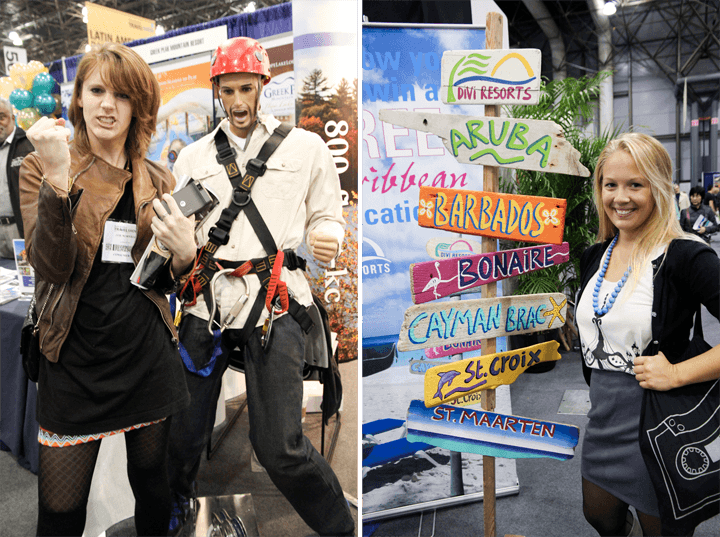 The highlight of the day, however, came once again after the conference was over. At a bar basement in the Lower East Side, travel enthusiasts gathered for another session of Restless Legs, the travel writing-reading series also put on by my past professor. This was one of the highlights of the weekend for me last year and lived up to the hype yet again. It was a special evening and I hope that I am lucky enough to attend another in the future. 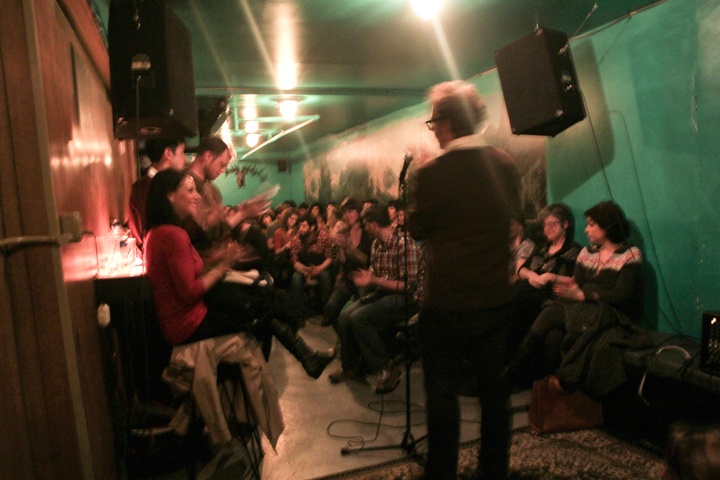 Sunday was the final day of the show and to be honest, if I hadn’t already made plans to go with my mom and my sister, I might have skipped out on a third round. But I’m so glad I didn’t.

I started out by attending two destination specific seminars- one on South America and one on Burma. These can tend to lean towards sales pitches but thankfully the speakers were great, especially Marilyn Staff of Asia Transpacific Journeys. I fall more into the backpacker/flashpacker category myself, but if I ever become a luxury traveler I would be all over that company. 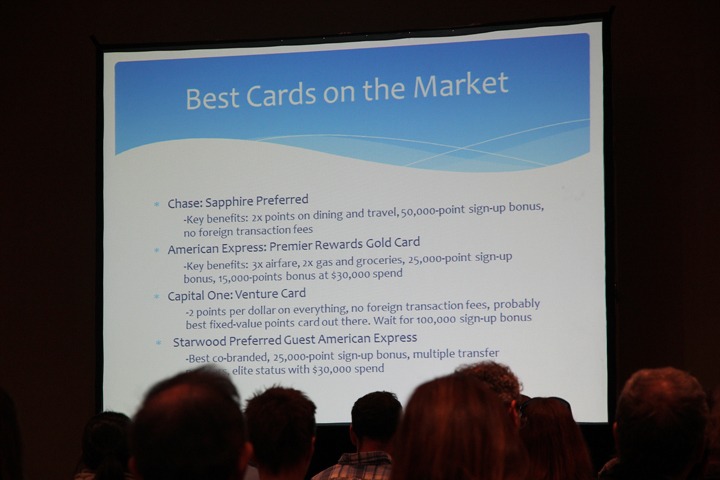 However, the final seminar of the weekend that I attended was by far the most informative, well put-together, and beneficial. It was Beating the System – Travel Points Pointers for a First Class Lifestyle on a Budget by Brian Kelly, The Points Guy. I was furiously taking notes on my blackberry about how to make this whole travel rewards thing first when Brian said “I will give the first person to tweet ‘I love points!’ 10,000 AMEX rewards points.” Well. I was on the Twitter app in a nanosecond and as you can see below even sacrificed spaces, but still couldn’t believe it when I heard that I had won! An excerpt from my Twitter stream that day is below, with the newest tweets at the top. 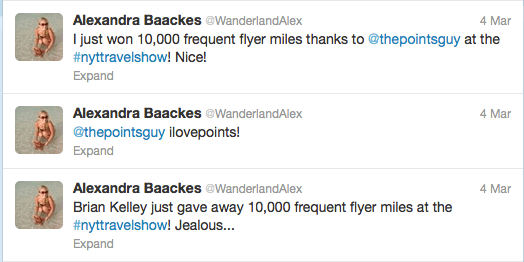 I was so excited to win! As I type this post I am sitting in a cushy hotel that I booked with points, so stay tuned for more details on that and some of the juicy tips we learned during that seminar. 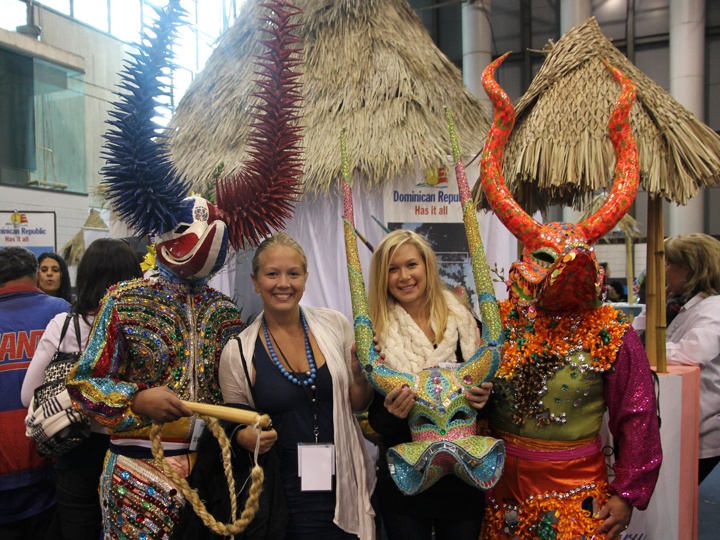 All in all, I loved spending the weekend surrounded by travel mania in every direction. The showrooms floor was chaotic and fun, some of the seminars were good and the post-show events were wonderful. The biggest drawback was I found myself overall disappointed at most of the seminars in comparison to last year. I can’t be sure though if that has to do with the seminars not being as good or with me being a year wiser/more jaded. Still, I will absolutely attend again in the future, though I’m not sure I’d go out of my way to be there if I wasn’t already in New York. I realized this year that the real highlight for me was the stuff going on outside the actual show- meeting people in the industry and making great connections and new friendships. Long live the travel addicts among us! 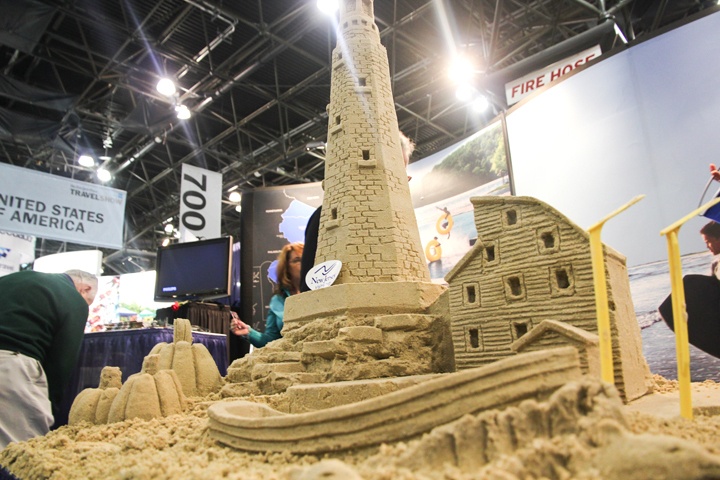 Were you at New York Times Travel show? What did you think?

Ask Me Anything: Answered!