Though it may be set on the warm shores of Oahu, this is far from a breezy beach read. I arrived in Hawaii with a suitcase full of books and a stern vow not to buy any new ones until those were finished — a vow swiftly broken when I discovered that one of my favorite authors had written a fictional novel set on the very island I was on. And thus I began Hotel Honolulu. 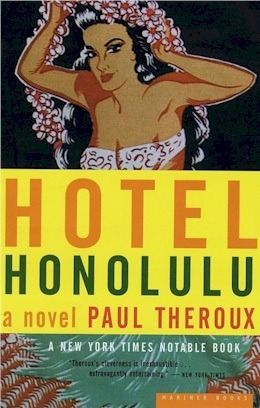 At 424 pages broken into 80 bite-size chapters, Hotel Honolulu feels more like an epic short story collection than a typical plot-streamlined novel. While time does move along chronologically (for the most part), it does so unevenly, and with characters weaving in and out and random intervals, sometimes appearing for just several chapter and then disappearing forever, sometimes popping in and out sporadically throughout the book.

The Hotel Honolulu, an aging and somewhat seedy establishment in Hawaii’s capital city, it the thread that holds each story together. Through the staccato character-based chapters, we learn the intimate secrets of guests and staff, often through the lens of the unnamed narrator and main character, a former author and current underqualified Hotel Honolulu manager from the mainland.

If there is a common thread that holds these stories together, it is a somewhat depressing one — discontentment, disappointing circumstances, and the idea of a paradise lost. “That’s why I like the name you gave the bar — Paradise Lost — because the only place that can truly be hell is the one that was once Paradise,” explains one of the hotel’s loyal barmen.

As with any destination-based novel, the setting is one of the main characters. Hawaii is presented here warts and all, a place capable of being both a haven and a hell to visitors, expats and locals alike.

I started this book while I was in the complete honeymoon stage with Hawaii, and to be fair I never really left it. So I enjoyed the balance this book brought to my rose-tinted glasses — it reminded me that Hawaii is a flawed place like any other, simply because it too is filled with flawed people.

Hotel Honolulu is filled with dark humor, as the high-brow narrator clashes with his local staff, who we get to know through masterfully crafted vignettes. The owner, Buddy, is a larger-than-life character — “he was one of the last of a dying breed, a rascal in the Pacific.” Many chapters focus on Buddy and his unending practical jokes, his vulgar tone, his twisted past, and the similarly strange background of his current wife Pinky. Others hone in on other members of the staff, or in my favorite bits, the eccentric guests that passed through the doors of the hotel.

The short-story-esque format meant that sometimes I was bored, sometimes just mildly entertained, and sometimes totally enraptured. My favorite part of the book started with Chapter 13, “The Prevision of Hobart Flail”, a portrait of a fatalist and hypochondriac guest who, in one short sentence within the chapter, predicts that another guests coral-scrapped leg will be infected and amputated. The last sentence of Chapter 13 informs us that “that man… who nicked his shin on the reef? He lost his leg.” Chapter 14, “The Keychain,” is dedicated to explaining that horrific chain of bad luck that starts with a man’s good dead retrieving a local kid’s keychain and results in him legless, jobless, and along, and ends with fatalist grim conclusion. “‘This sort of thing happens a lot,’ Hobart Flail said. ‘Most people don’t know that.'” And so goes the interconnected, Crash-like style of Hotel Honolulu.

Other favorite characters were the eccentric socialite and columnist Madam Ma and her closeted — and occasionally murderous — son Chip, who entertained me for a good ten chapters. I also loved the heart-aching and cleverly-told story of Vietnamese bartender Tran, which unfolds in just one short section — Chapter 61, a Chinese story.

The word ‘mainland,’ spoken in Hawaii, sounded to me like ‘Planet Earth.’ 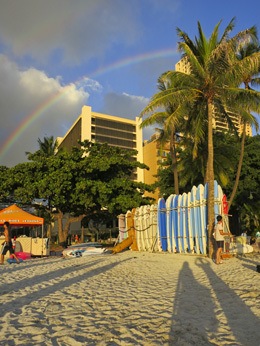 Personally, I connected to much of the book that focused on expat life, as the narrator was living it. For example, there was much in Hotel Honolulu of tension between locals, expats, and tourists. Perhaps I personally was not in Hawaii long enough to feel it there, but I am familiar with the sensation thanks to my time living in the Cayman Islands and Thailand, two other tourism-dominated destinations. As Buddy warns the narrator, “They say the Hawaii state motto is Hele I Loko, Haloe ‘Ino Aka Ha’awi Mai Kala — Go Home, You Mainland Scum, but Leave Your Money Behind.”

And the narrator often struggles with being a stranger in the island he has chosen as his home, even after more than a decade passes.  “The worst fate was that of being miserable and distant, and not just distant but out of the known world, which was like being buried alive.” Anyone who has lived abroad extendedly can relate to this specific kind of sadness.

The bottom line is that Paul Theroux is a master at his craft, and any subject he trains his eye on will be dissected in near literary-perfection.

I wouldn’t necessarily say I didn’t like this, but it did disturb me at times and may elicit similar responses in other readers: Hotel Honolulu is brimming with explicit scenes of sex, rape, incest and nefarious activities.

Also, as much as I love Theroux, he really challenges me and his books often take me an embarrassingly long amount of time to finish. The format of Hotel Honolulu made it less of a page-turner that I’d devour in a week on the beach and more of a slow burn, something that in the end took me months to complete as I often lost momentum when characters I was starting to invest in simply disappeared.

Expatriates, those who have traveled to are planning to travel to Hawaii, short story lovers, anyone looking for a quirky read.

Today I’m giving away my copy to one lucky reader! Well, I might not go as far as lucky when you consider the dog-eared pages and the notes scribbled in the margin of a paperback that has traveled the continents, but let’s just call that condition well-loved, shall we? Think of it as a virtual free bookshelf at your favorite hostel.

To enter, simply subscribe to this blog via RSS or email (below) and leave me a comment telling me that you have done so! Next week I’ll use a random number generator to pick a winner. All readers are welcome to enter as I’m mailing internationally from Thailand!